Raging left-wing activist, and has-been Hollywood actress Alyssa Milano has recently been making headlines after claiming — in seemingly yet another attempt to stay somewhat relevant – that she found the act of childbirth to be “very reminiscent of being sexually assaulted”. 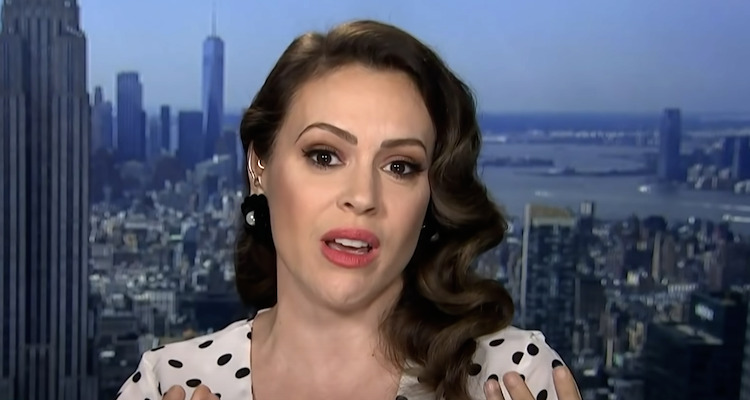 During a recent interview with People Magazine, Milano said that during childbirth she “remembered at one point really not enjoying the fact that lots of people had access to my vagina. And thinking to myself, ‘Why does— I don’t like this. Why does it feel so familiar? I’ve never had a baby before. Why does this invasive feeling feel so familiar?'”

“That was just a fleeting moment, a tick in time, but I didn’t forget about it,” she said, adding, “After going through therapy after giving birth to Milo and remembering that one moment of feeling like I was being held down and had things being done to me that I didn’t want, to me, was very reminiscent of being sexually assaulted.” 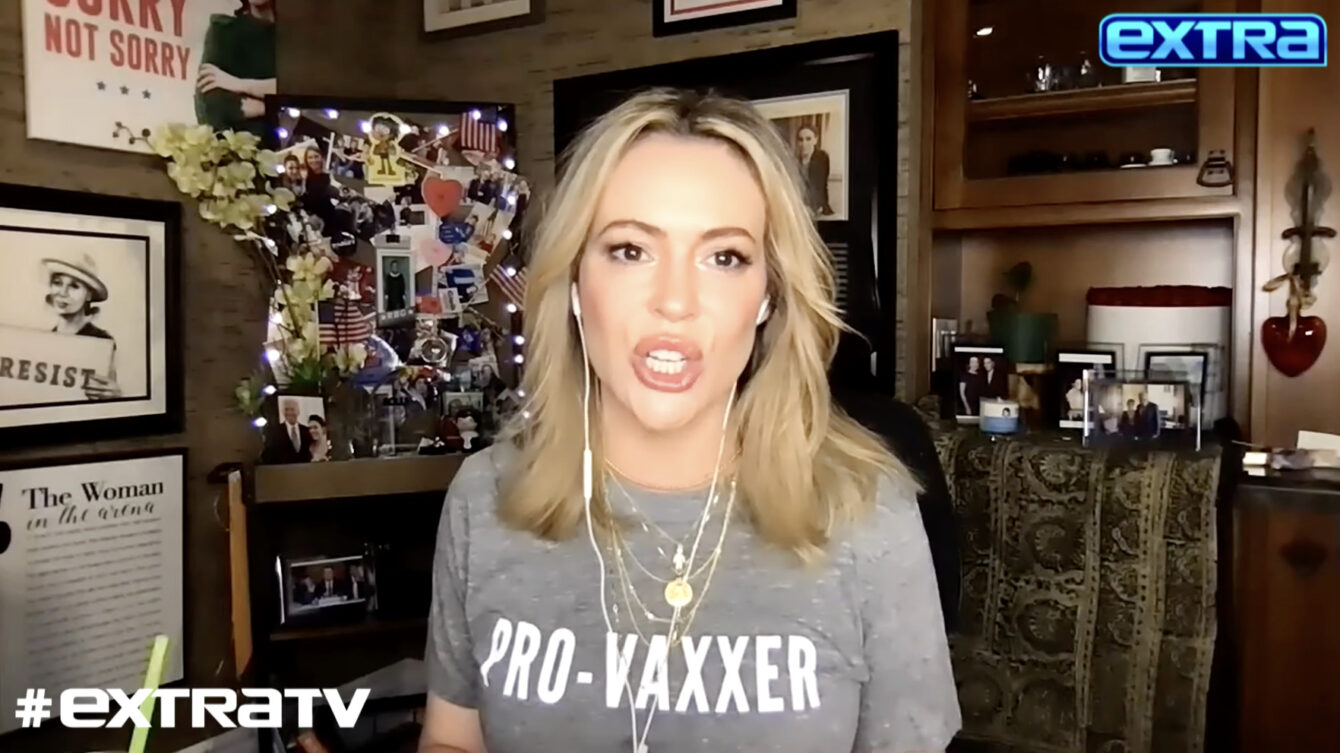 A few years ago, as part of a movement that “arose in response to President Donald Trump’s criticisms of Christine Blasey Ford,” Alyssa Milano timely claimed to have been sexually assaulted as a teenager.

In a first-person piece published by news and opinion media outlet Vox, Milano wrote, “It took me years after my assault to voice the experience to my closest friends.”

“It took me three decades to tell my parents that the assault had even happened,” She added. “I never filed a police report. I never told officials. I never tried to find justice for my pain because justice was never an option.” 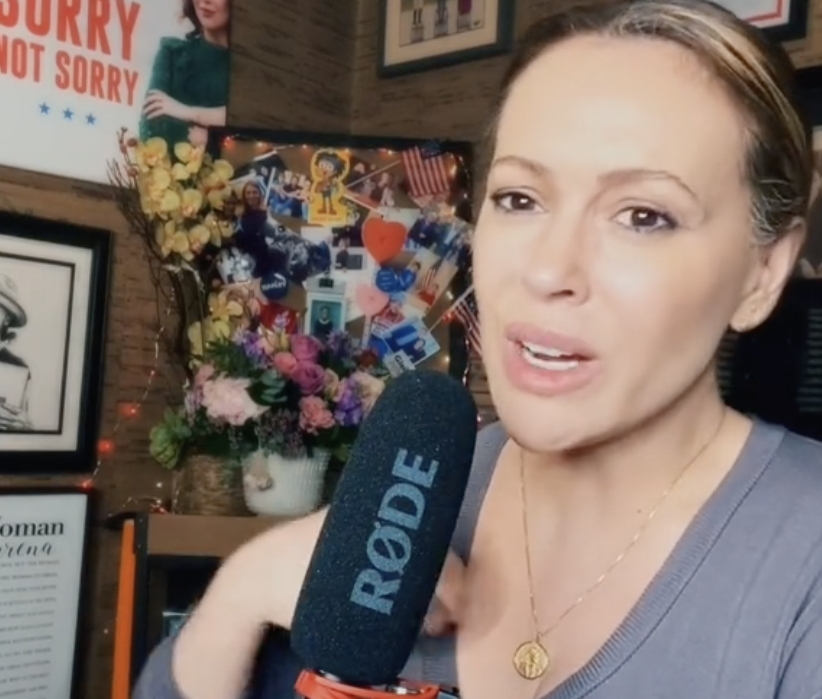 Unsurprisingly, after the publication of her interview, numerous news outlets began reporting on her words.

In response to one such report by the New York Post’s Page Six, Milano wrote, “after going through therapy and giving birth and remembering that moment of feeling like I was being held down and had things being done to me that I didn’t want, to me, was very reminiscent of being sexually assaulted.”

“This is my truth,” Milano continued, sharing a link to her interview with People wherein she told this particular story. “Please don’t reduce it to a headline.” 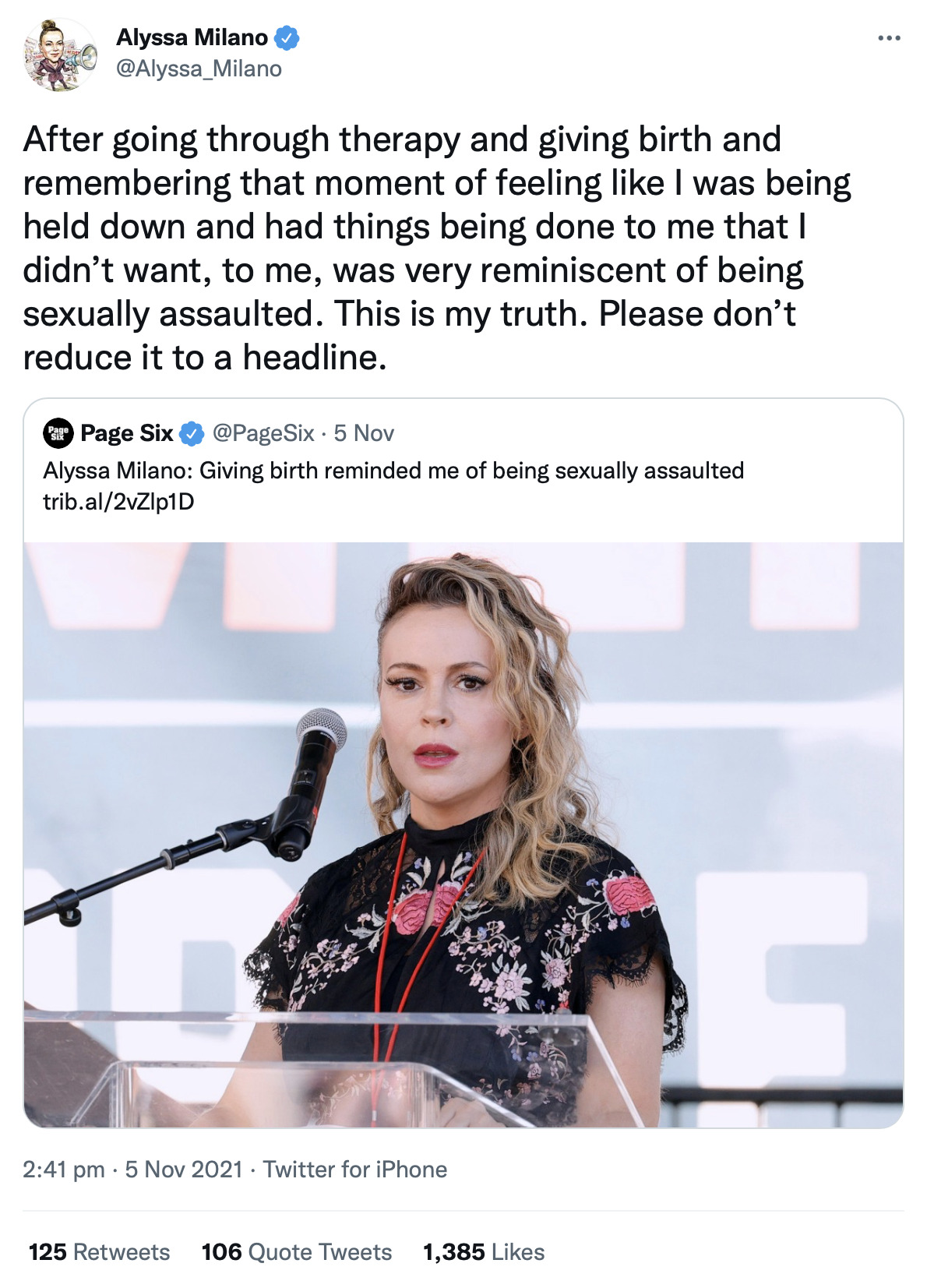 In a follow-up tweet the actress wrote, “My hope in sharing my struggles is that it will help birthing people fee less alone.”

“It has no reflection of my complete and total love and pride I have for my children,” Milano concluded. “I LOVE being their mother. I write of all of this and more in my book. #SorryNotSorry”. 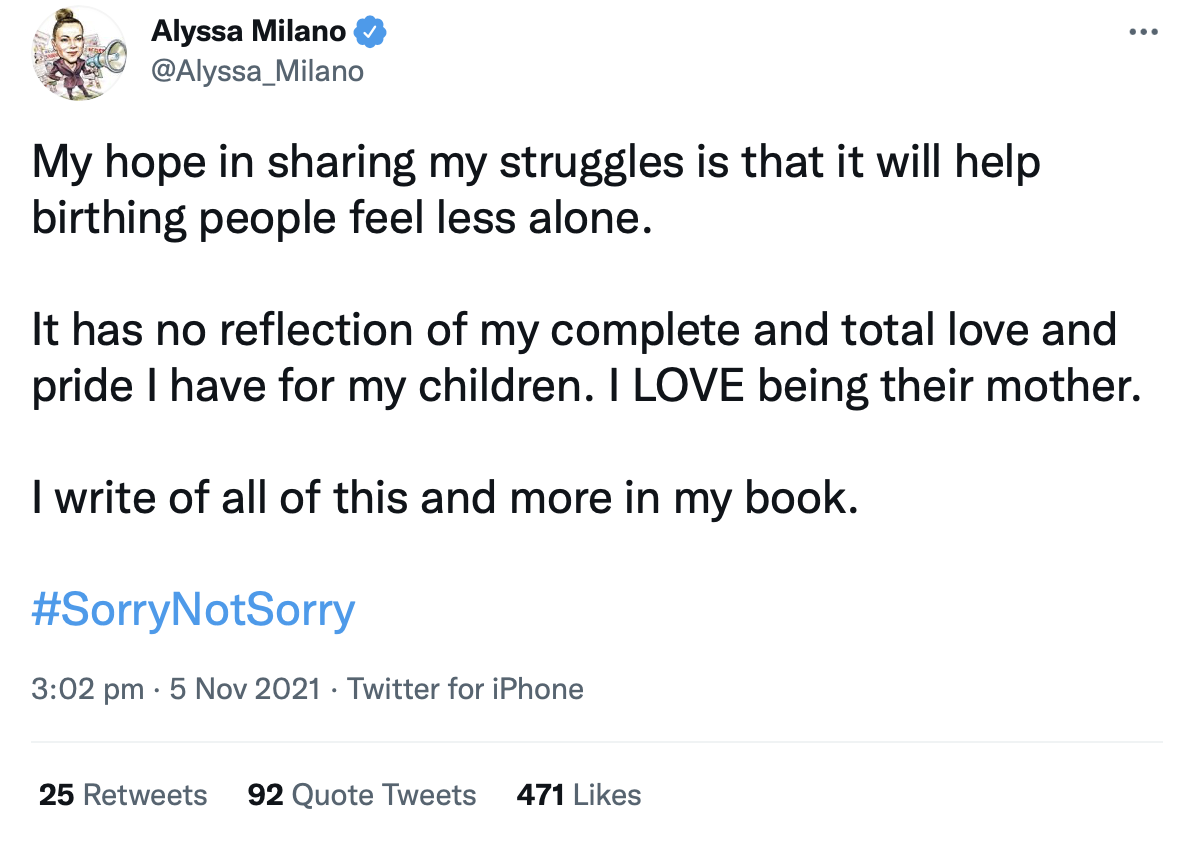 However, whether Milano’s allegations of sexual assault are true or her comparison of childbirth to sexual assault is apt are topics for another time, as fortunately for the former Charmed actress, her woke use of the term “birthing people” resulted in a wave of criticism from social media users.

Twitter user @largemarge777, for instance, questioned Milano’s use of the term, writing, “‘Birthing people’ is a pretty alienating and demeaning term. Not sure what audience you are speaking to here…”

“‘Birthing people,’. Lol. The English language has a word for such folks. It’s called ‘women.'” pointed out @FrRKBarberg.

“Not birthing people – Biological Women and only biological women are physiologically capable of giving birth,” asserted @ShellieGoff. “It is something for us to be proud of, not despise.”

“I LOVE being their mother. I think you meant to say you love being their birthing person,” @BadName717 sarcastically corrected Milano, holding her to her own woke vocabulary.

“‘Birthing people?’ Where you asleep on Tuesday? You can ask @JamesCarville about the results,” wrote @mnshurricane whilst alluding to a comment made by Democratic strategist James Carville, who blamed the gubernatorial election losses in Virgina on  “stupid wokeness” and progressives.

@omarslopezarce presented a quote by Harry Potter creator J.K. Rowling, who in June of last year stirred some controversy when she spoke out on sex and gender issues.

“I refuse to bow down to a movement that I believe is doing demonstrable harm in seeking to erode ‘woman’ as a political and biological class and offering cover to predators like few before it,” wrote Rowling at the time. 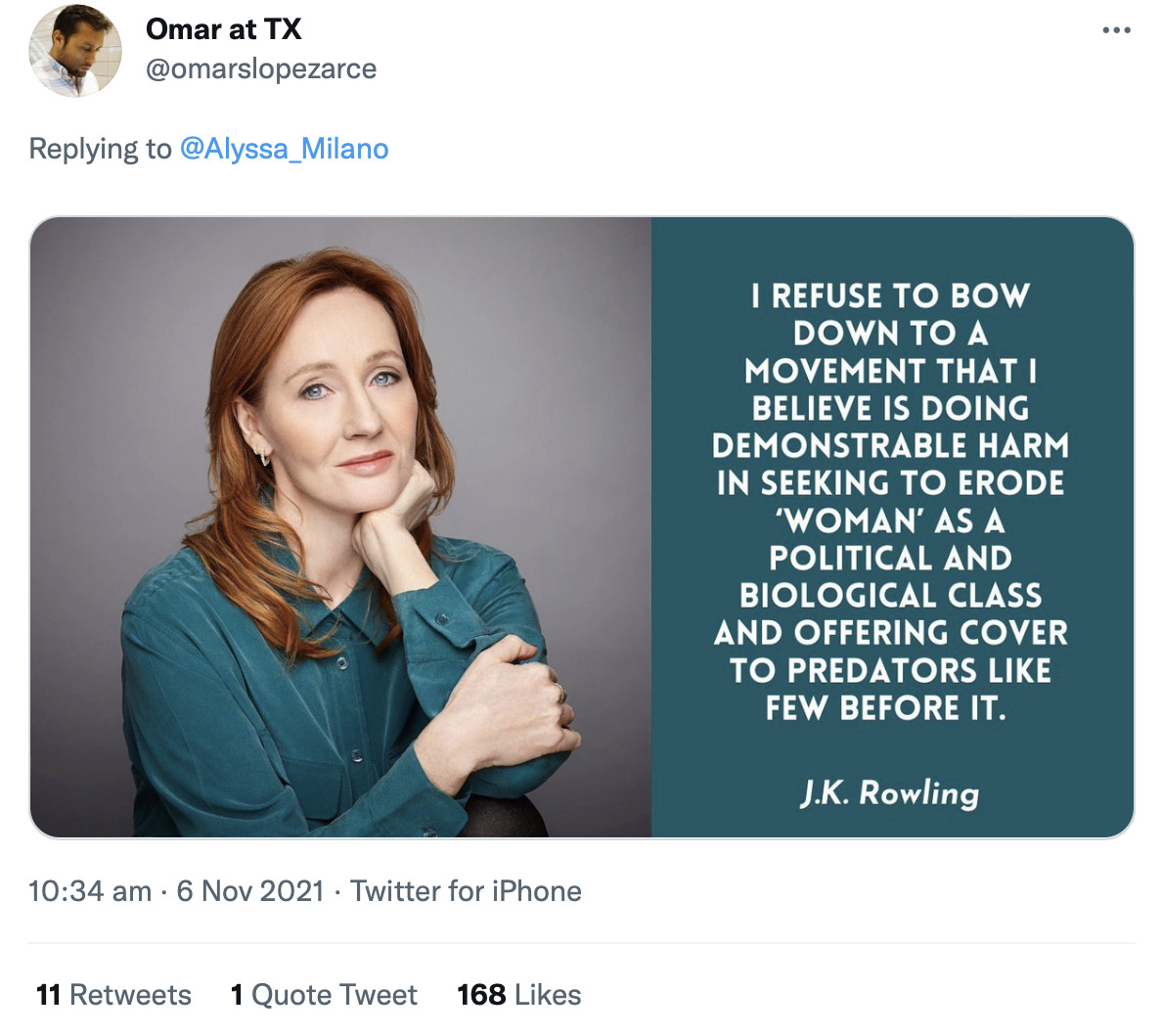 “‘Birthing people?!’ So you mean women??” asked @laraengh, adding, “You do realize that this is demeaning to women. It devalues our worth as women and as mothers.”

@CAPO60959478 simply questioned the actress’ entire post, writing, “could this statement be more ridiculous?” without specifying whether they meant Milano’s comparing of childbirth to sexual assault or the use of “birthing people” instead of women.

What do you make of Milano’s recent comments regarding childbirth? Let us know your thoughts in the comments section down below or on social media.