Marvel creator Dylan Park appeared to call for the burning of Kenosha, Wisconsin in a now-deleted tweet as part of his on-going thread discussing the Kyle Rittenhouse trial.

Park began his thread sharing a video of Rittenhouse crying after he took the stand to testify as part of his self-defense case.

Park wrote, “White privilege is illegally carrying a weapon to an event with the intent to use it, murdering two people, then getting up on the stand and crying about being the victim. (And of course he’ll be acquitted.)”

White privilege is illegally carrying a weapon to an event with the intent to use it, murdering two people, then getting up on the stand and crying about being the victim. (And of course he’ll be acquitted.) https://t.co/iaUjGWbxmF

He continued the thread writing, “Top-5 most punchable faces I’ve ever seen.”

Next, he accused Judge Bruce Schroeder of being a member of the Ku Klux Klan tweeting, “I would not be surprised in the least if this judge had white robes in his closet too.”

He continued to criticize Judge Schroeder writing, “The defense attorney doesn’t even have to do anything because the judge is shutting down the prosecutor every chance he gets.”

Continuing he tweeted, “The judge just cited ‘ignorantia juris non excusat’ or ‘ignorance of the law excuses no one’ as a reason to STOP the prosecutor from asking Rittenhouse his knowledge of the law. Which makes zero sense.” 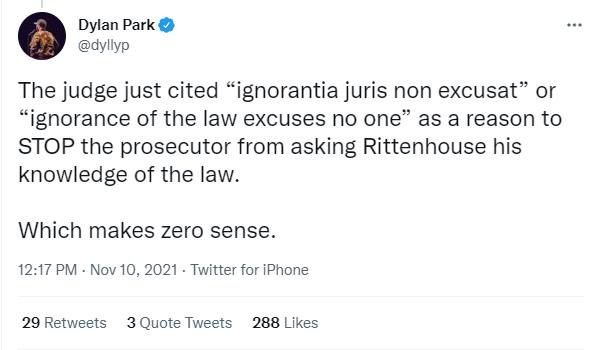 Next, he wrote, “This judge is SCREAMING at the prosecutor. This trial is over.”

“The prosecutor posted photos of Rittenhouse holding an AR15 with the caption ‘I’m just tryna be famous.’ Then he had Rittenhouse cornered in another lie, so of course the judge pressed pause and kicked the jury out to scream at the prosecutor again,” tweeted Park. 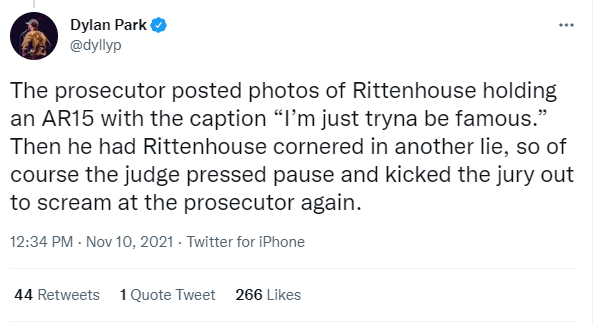 He then shared three screenshots of headlines and captioned them, “Lol.”

The second one states, “Kyle Rittenhouse Judge Pauses Trial to Rant Against Media.” 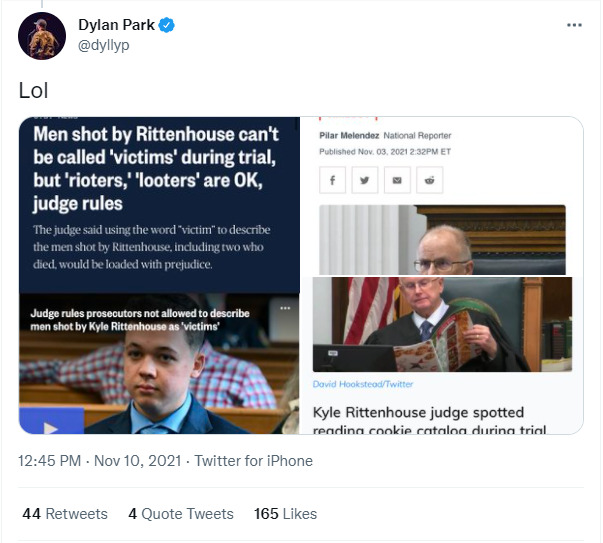 Next, he shared a video of Judge Schroeder lecturing prosecutor Thomas Binger regarding his questioning of Kyle Rittenhouse’ fifth amendment rights.

He wrote, “Here’s that video of the judge absolutely losing his s***”

Here’s that video of the judge absolutely losing his shit https://t.co/RWto3O2X4x

He then shared another video of the judge dismissing the weapons charge against Kyle Rittenhouse.

Park wrote, “And the judge just dismissed the illegal possession of a weapon charge because, get this, the barrel of his AR-15 was too long. Lmaooooooooo.”

And the judge just dismissed the illegal possession of a weapon charge because, get this, the barrel of his AR-15 was too long. Lmaooooooooo https://t.co/f5PXnFSEEa

Next, Park continued to target Judge Schroeder saying, “If I wrote a script about a crooked judge with this storyline, the studio would reject it saying it’s too on the nose. ‘You’re not even pretending to hide his bias.’ Well.” 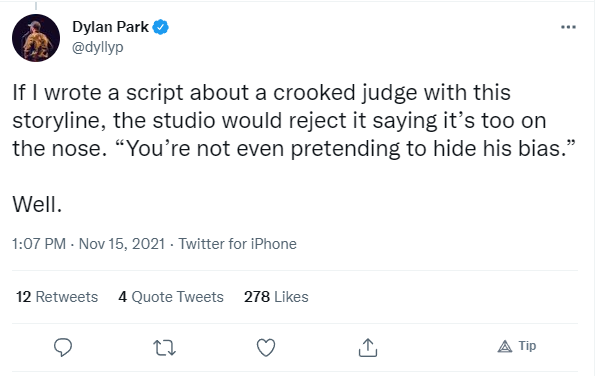 In a now-deleted tweet, Park called for Kenosha, Wisconsin to be burned.

He tweeted, “‘With a verdict near, Governor Tony Evers said that 500 National Guard members would be prepared for duty in Kenosha if local law enforcement requested them.'”

He added, “Burn that mfer to the ground.” 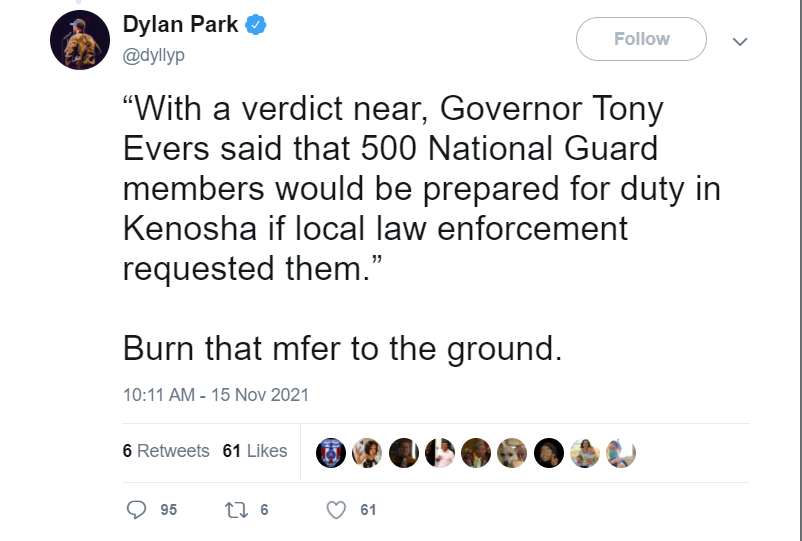 He next tweeted, “They mad.”

He concluded the thread writing, “The prosecutor is having him a helluva closing statement.”

While Park would delete his tweet calling for Kenosha to be burned down, he appeared to show no remorse in doing so.

He tweeted, “When I cause a ruckus then mute the tweet and leave em screaming at the clouds.”

When I cause a ruckus then mute the tweet and leave em screaming at the clouds pic.twitter.com/L5gns9zoZE

In another tweet he wrote, “Them: These woke PC snowflakes and the leftist cancel-culture mob are pathetic.”

He added, “Also Them: Halpppp Twitter Support, he quoted Orange County and tweeted mean things and” 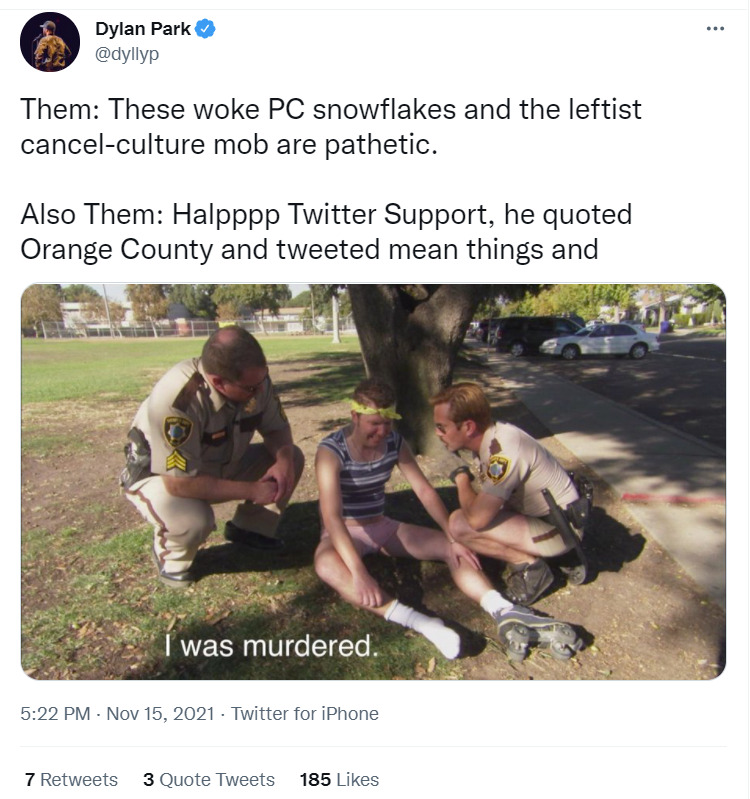 YouTuber Yellowflash reacted to Park’s comments saying, “This is the type of mindset we have working at Marvel Comics. That’s a horrible comment. Will this man be reprimanded? Maybe a slap on the wrist with Marvel? No, absolutely not.”

He added, “In fact, if anything, it’s celebrated. And that’s part of the problem with the comic book industry and with Hollywood in general.”

What do you make of Park’s comments?