Kurosaki made his opinion known when he took to Twitter in early December. He wrote, “Taking my son through the Star Wars films. We’ve entered prequel territory. The Phantom Menace is straight up garbage and racist too.”

One Twitter wrote in response to Kurosaki, “multiple colors of people.. what is racist, the aliens? They are non human. Anything anyone sees that is racist is looking in a mirror, not at the alien.”

The former Narrative Design Lead at Naughty Dog responded, “Nonhuman characters are written by people, and people can have blindspots and be influenced by stereotypes.” 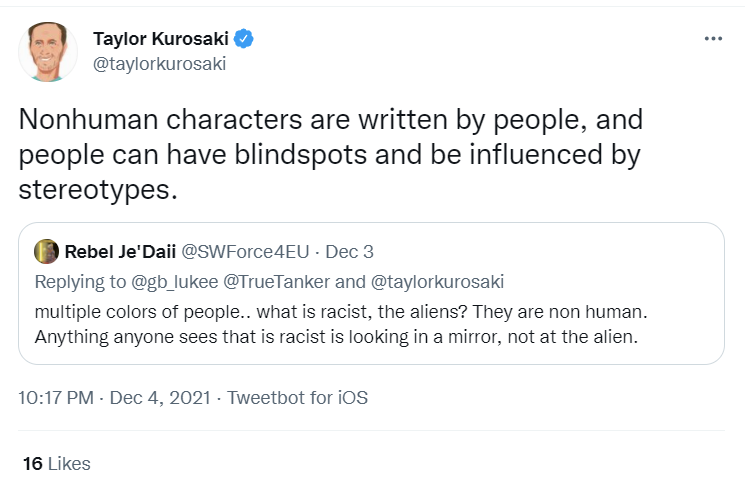 Complaints about The Phantom Menace and its alien characters are not new.

Back in May 1999, ten days after the film originally released in theaters, the Los Angeles Times reported, “Audience members have complained that Nute Gunray, the evil Viceroy of the Federation, seems based on Asian stereotypes.”

They continued, “And Watto, young slave Anakin Skywalker’s sleazy owner, strikes some viewers as an offensive caricature of an Arab.”

“In addition, the Gungan, the primitive tribe of which Jar Jar is a member, is ruled by a fat, buffoonish character, seemingly a caricature of a stereotypical African chieftain,” they further added.

Not only has The Phantom Menace been accused of racism before, but it’s also been lampooned, most famously by Red Letter Media and their fictional critic Mr. Plinkett.

In the opening to their The Phantom Menace review, Mr. Plinkett states, “Star Wars: The Phantom Menace was the most disappointing thing since my son. “I mean how much more could you possibly f*** up the entire back story of Star Wars?”

He later adds, “The unfortunate reality of the Star Wars prequels is that they will be around forever. They will never go away. They can never be undone.”

What do you make of Kurosaki’s claim that The Phantom Menace is “garbage and racist?”