Amanda Milius, the director of The Plot Against The President and the daughter of John Milius, recently insinuated that her father was axed from HBO’s Rome over his conservative politics. 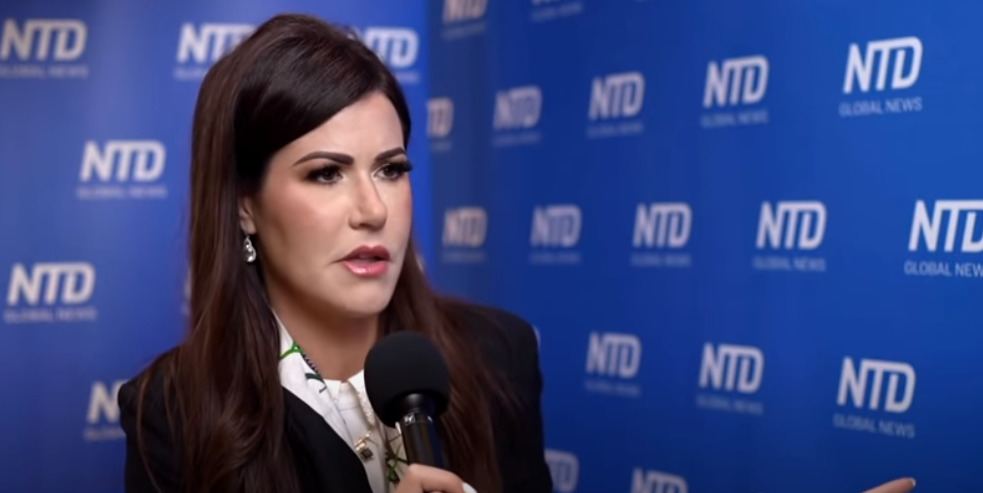 John Milius was the creator of Rome alongside Bruno Heller and the two worked on the show from 2005 to 2007 when HBO cancelled it after 22 episodes.

He also directed Dillinger, Conan the Barbarian, Red Dawn, and Farewell to the King.

Speaking with the New York Times in 1992, Milius claimed he was blacklisted by Hollywood telling them the producers and studios were less forgiving for his box office flops compared to those of directors with leftist views and messages.

“It weighs 10 times heavier against me,” he explained. “If you don’t share the politically correct vision, then you are an outlaw, you are hunted, there is a price on your head, and if they catch you, they will hang you.” 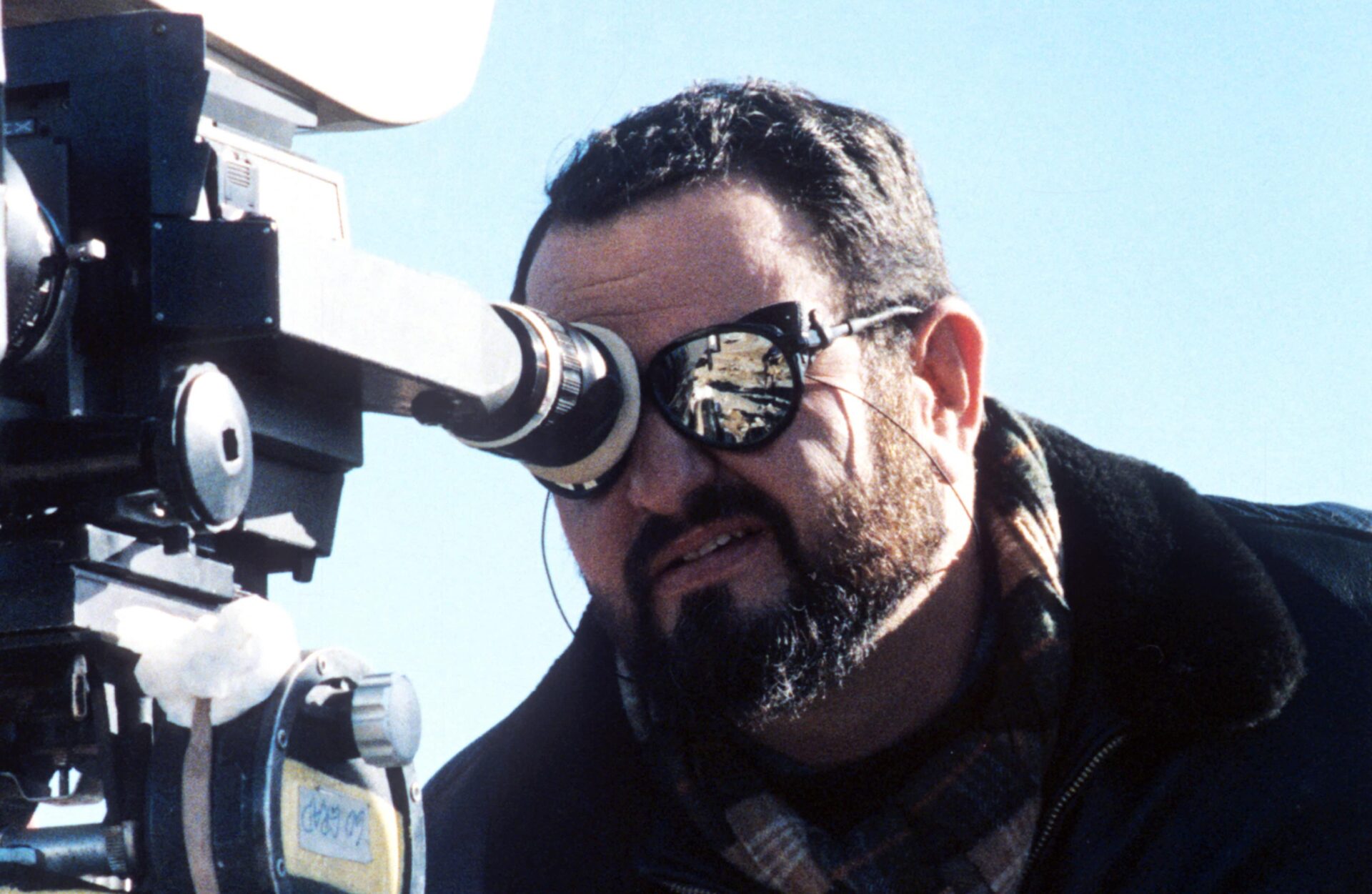 Now, in a response to a fan claiming Rome was the greatest modern series that Milius was part of, Amanda Milius responded by writing, “He created it, wrote it from scratch. It actually brought him back from his prior blacklisting.”

She then added her own praise for the show, “I say this not bc he’s my dad but I truly find it to be the best series ever done on HBO. I watch it once a year. It’s about time for this one. Check the credits it’s created by him.” 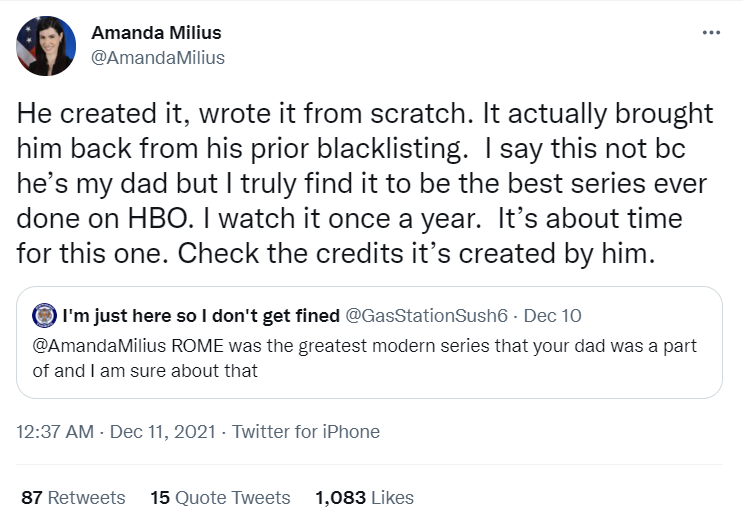 In a response to another Twitter using, Milius revealed that her father had written multiple seasons of the show after Season 2, and then implied the show was cancelled due over Milius’ personal politics.

She wrote, “There were many more seasons written. The head of HBO changed midway (to a lib woman who hated him) and they axed him halfway thu season two.

It could have gone on for ten years. He had it all written. It was glorious. I only understood it as an adult,” she added. 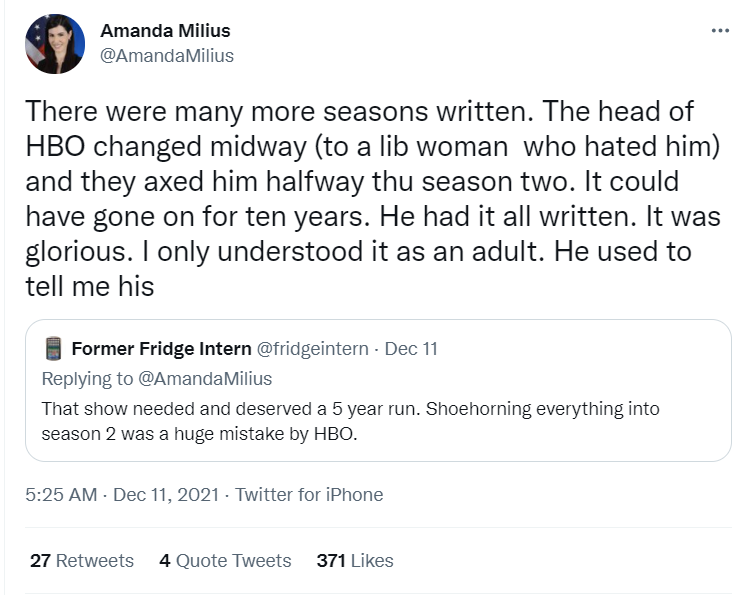 In a subsequent tweet, she wrote, “He used to tell me his Ideas while he was writing it. The part about the various pagan religions gaining popularity on the fringes on the empire I got to discuss w him as I was studying Zoroastrianism in middle school at the time.” 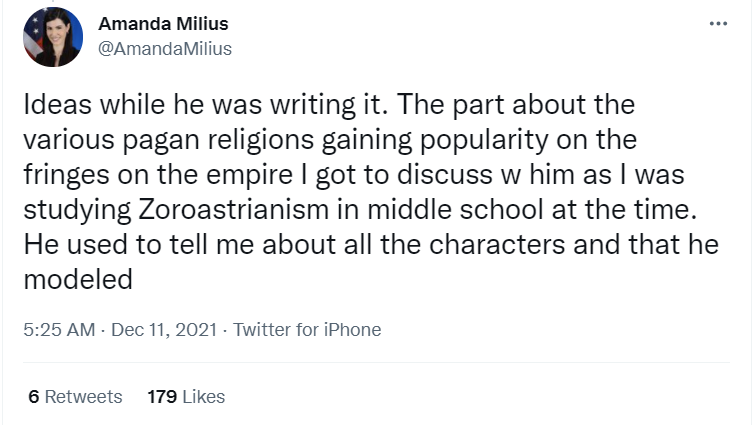 She then revealed that Attia was modeled after her mom saying, “He used to tell me about all the characters and that he modeled Attia on my mom bc tho they remained good friends she was the most beautiful and Machiavellian women he’d ever known. it was a bit much for me at that age but I certainly appreciate it now.”

As for who the HBO executive is that Milius claims canned her father and Rome, it’s not exactly clear as she doesn’t name any names.

The Guardian reported back in July 2006 that HBO Chairman Chris Albrecht announced the show’s cancellation at the Television Critics Association summer press tour.

Albrecht cited the show’s costs and their partnership with the BBC and RAI on the show was only for two seasons.

He stated, “The BBC and RAI are only signed for two seasons. It’s a big [financial] bite for them – and for us.” However, due to those partnerships Albrecht also noted Rome was “the most cost-efficient show we do.” 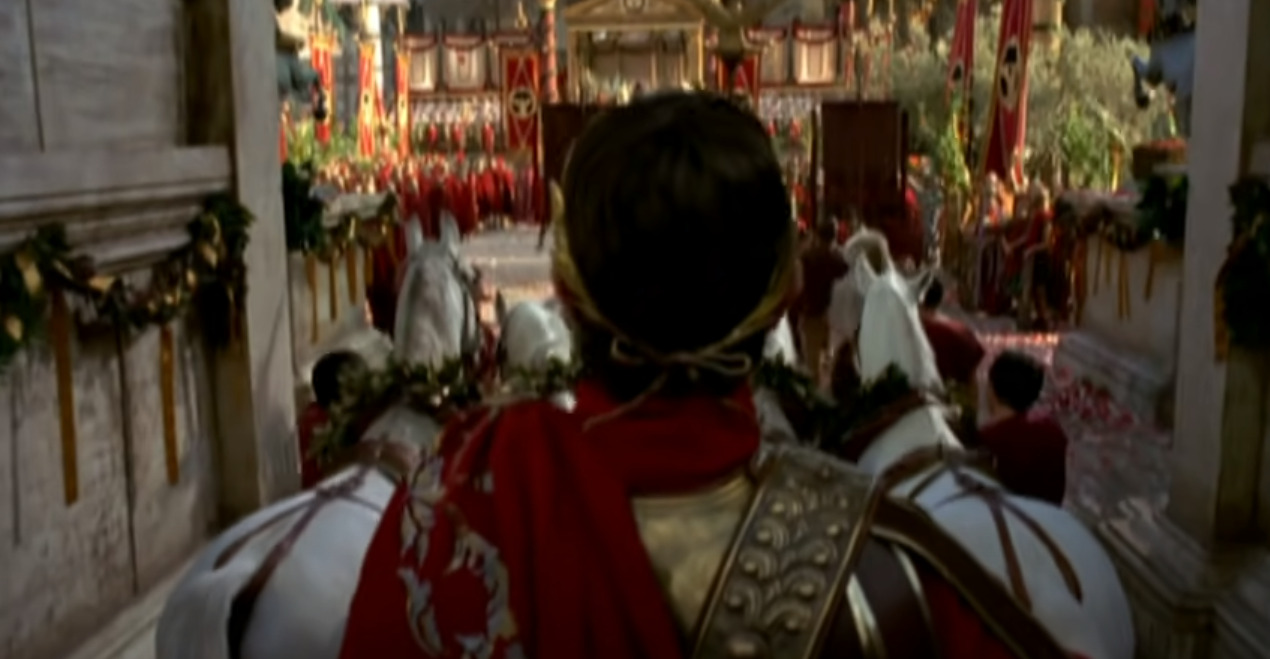 By June 2007, Albrecht would no longer be with the company after he voluntarily stepped down after being arrested suspicions of assaulting his girlfriend.

He would be replaced by Bill Nelson, who became the network’s chairman and chief executive. HBO would also elevate Richard Plepler, Eric Kessler, and Hal Askelrad to co-presidents. Michael Lombardo would become the president of its programming group. 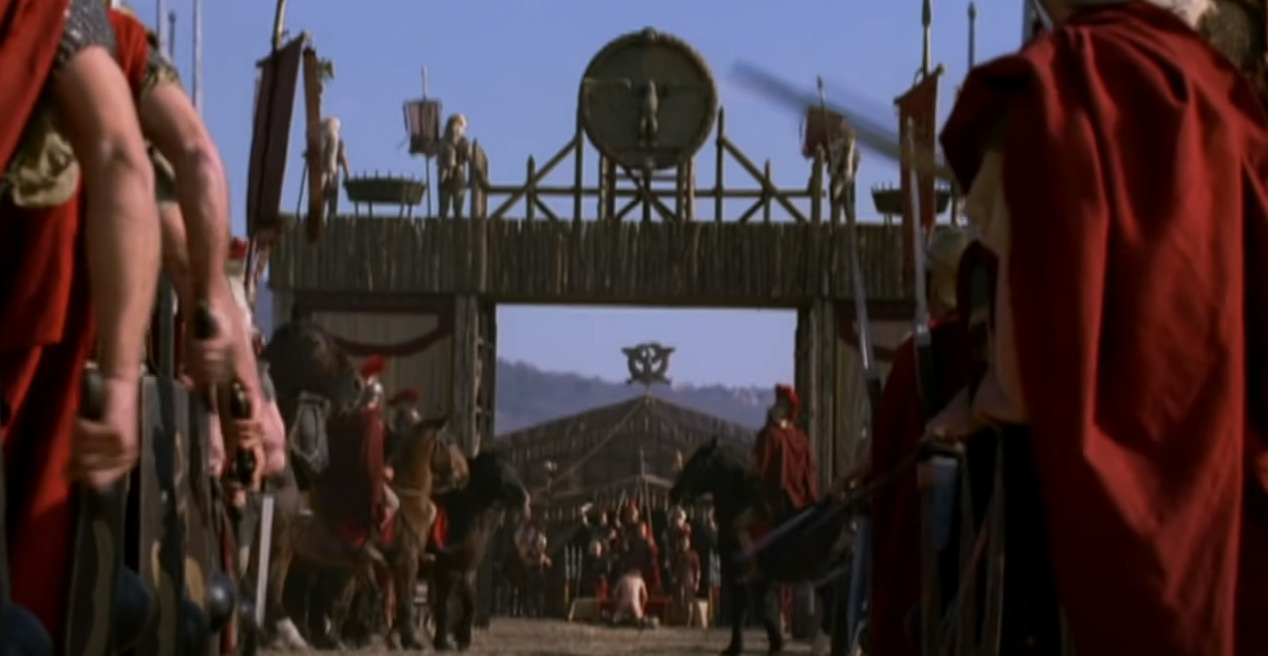 There was talk of the show being revived at HBO back in 2014. Heller spoke with Entertainment Weekly telling them, “Never say never.”

He went on to reveal, “Funnily enough, the sets are still there. They look very beautiful and are ready to go.”

“But realistically, the thing with anything that’s come and gone, is this business is so much about what’s next. It’s difficult to get things going again just because they should be. There has to be a very strong commercial reason, as well,” he said.

Heller then noted that the show’s two main actors would be willing to return and the decision to bring the show back would was up to HBO, “It’s just a matter of enough people thinking it’s a good idea. I could call Kevin and Ray and they’d love to come back and have another crack at it. It would be up to HBO. Normally I don’t like to look back, but that show was the great love of my life.”

That was seven years ago, and it doesn’t appear that HBO has made any moves to bring Rome back. 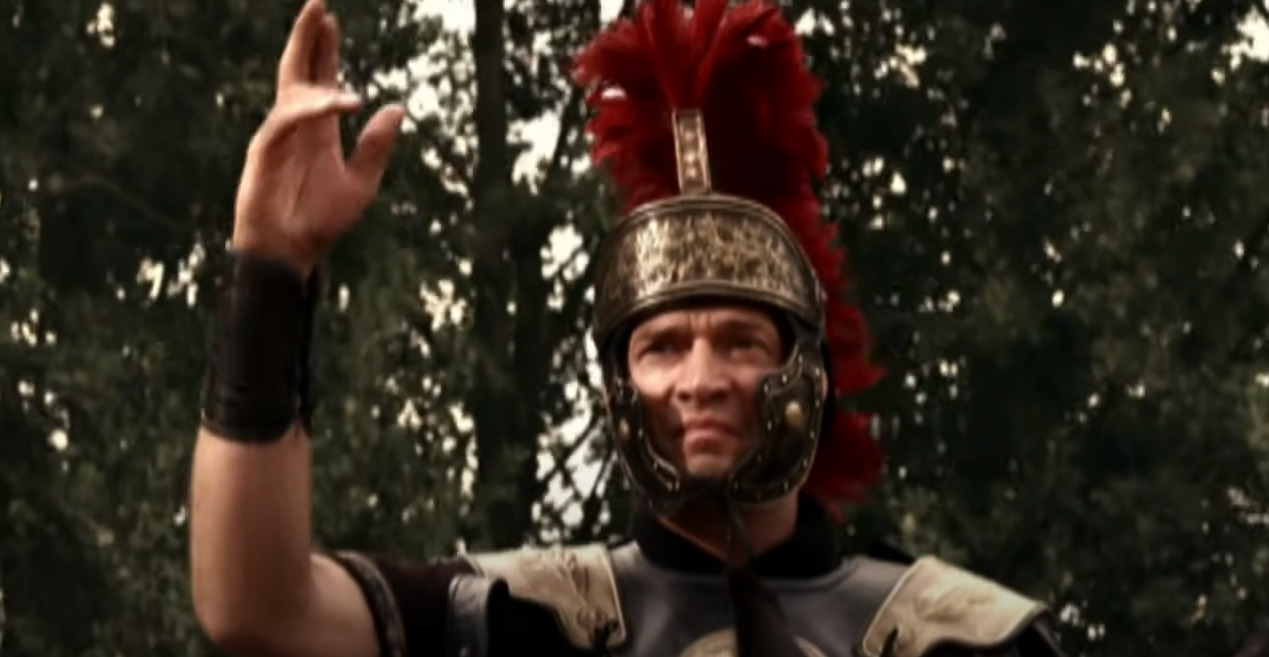 While Rome might not be returning, Amanda Milius is keeping busy. In November, it was announced she will be working on a film about John McAfee based on Mark Eglington’s book, No Domain: The John McAfee Tapes.

Not only will she be working on a narrative film, but she and her AMDC Films company will also be creating a companion documentary featuring taped interviews with McAfee that were conducted by Eglington in 2019. 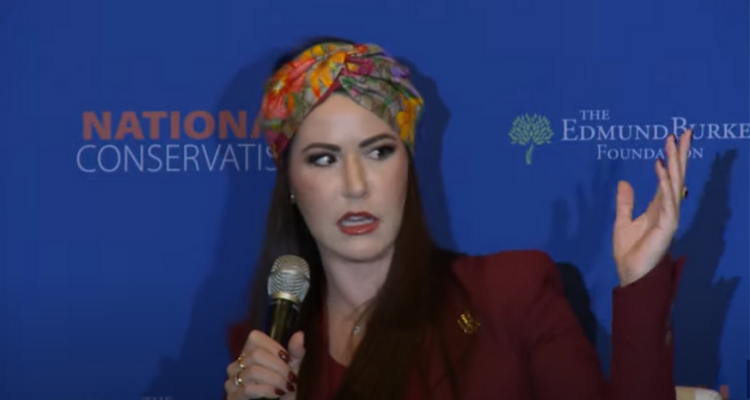 What do you make of Amanda Milius’ insinuation that Rome and her father were canned over his political views?

NEXT: The Blaze TV Host Steve Deace Claims “Unions Are Attempting To Shut Down” The Film Adaptation Of His Novel, A Nefarious Plot