Left-wing streamers Vaush and HasanAbi have been banned from Twitch, after both used the word cracker as a slur. 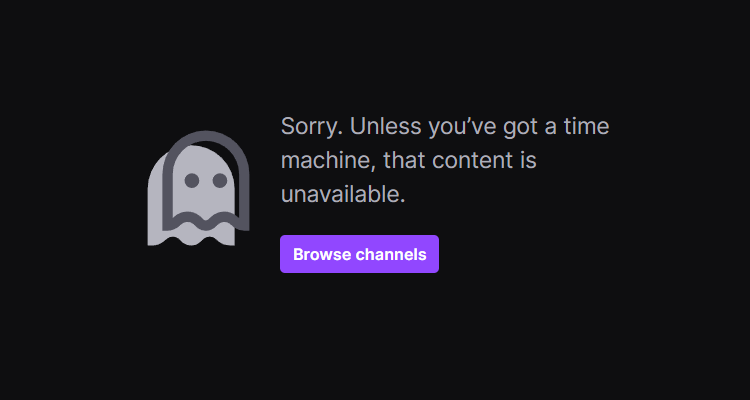 Ian Kochinsk (Vaush) and Hasan Piker (HasanAbi) have a lot in common. Both are left-leaning political streamers who debate others, discuss the positives of their ideologies, and play video games.

Now, they have one more thing to share between them, as the two were recently banned from the Twitch platform for saying the word cracker, a slur against whites.

Hasan’s ban, according to Vice, came after several of his moderators were banned for using the slur while describing a contestant on Master Chef. 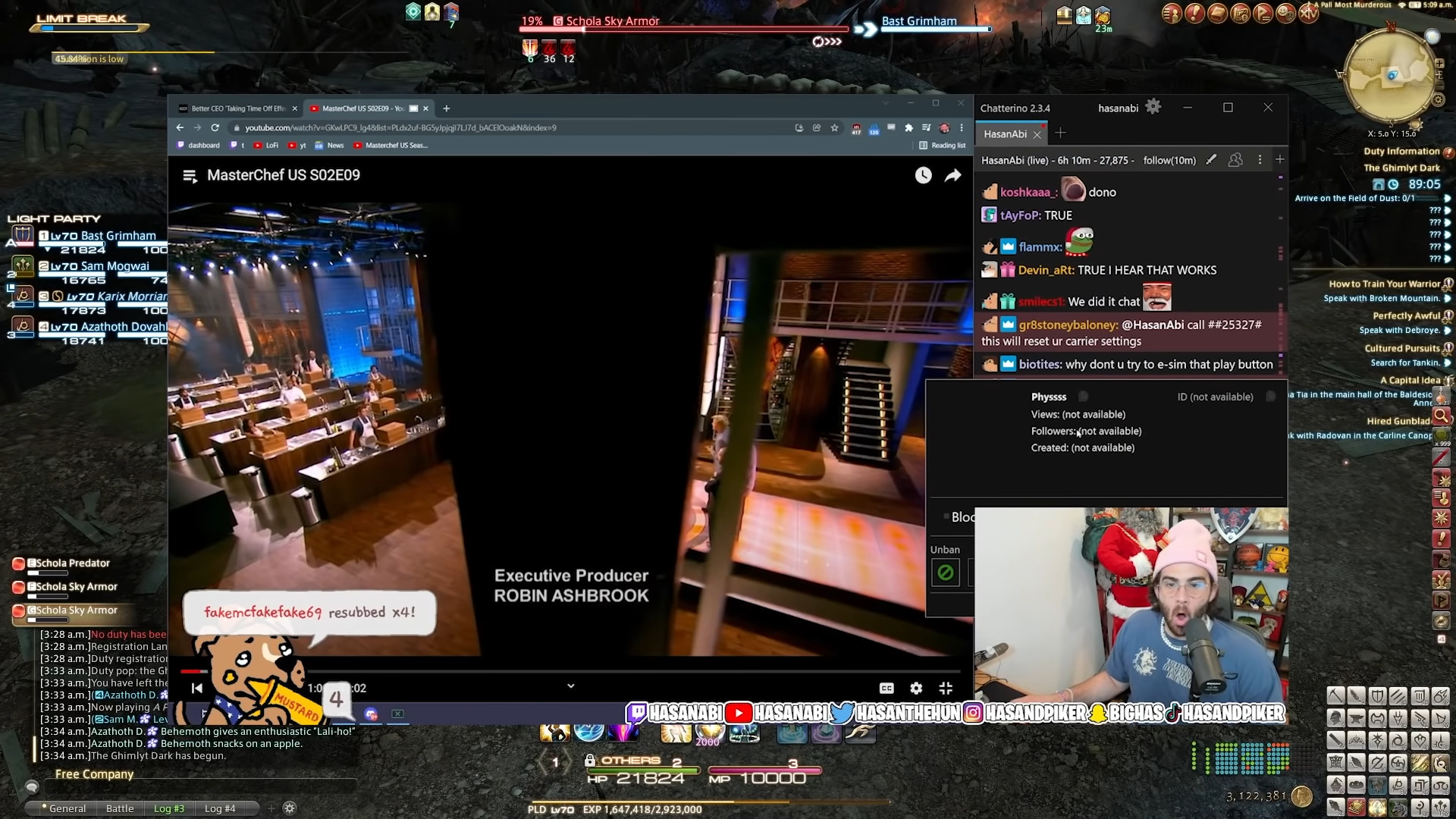 After this, Hasan, the nephew of The Young Turks co-founder Cenk Uygur and a former contributor for The Huffington Post, ranted that the term should not be seen as so hateful.

He claimed that the term could not be racist, not only because the etymology of the word was different to that of the n-word, but also because the slur, as alleged by Hasan, came from the act of a slave owner ‘cracking a whip’ and thus its use still kept the ‘power’ in white people’s hands . 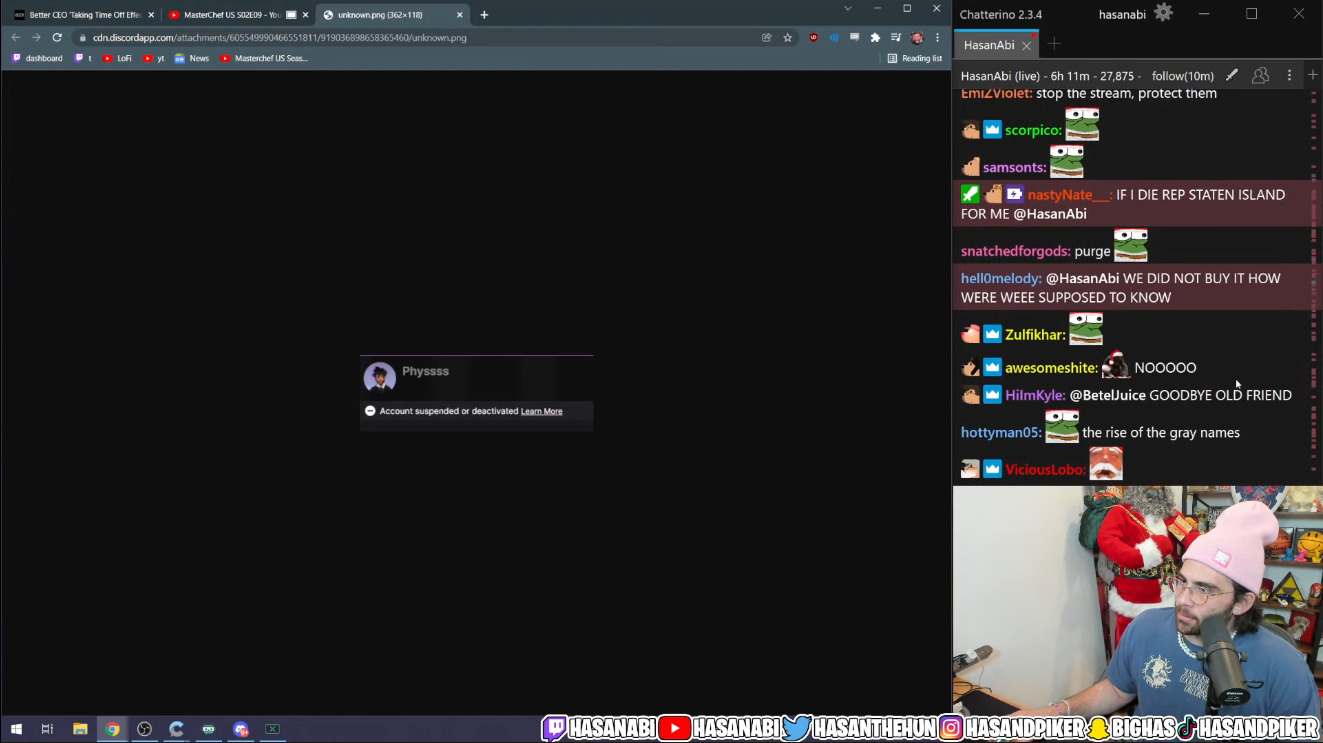 After the clip appeared on r/livestreamfails, users pushed back against Hasan, describing his argument was flawed and speculating that it was only made because the streamer wished to get away with saying the slur.

For example, though a 1912 glossary asserted that the term was used in reference to slave owners, its earlier uses had nothing to do with the practice. Instead, as recorded in the mid 1700s, the term was used to refer to “a lawless set of rascalls on the frontiers of Virginia, Maryland, the Carolinas, and Georgia” who routinely boasted of their exploits during conversation.

However, the definition soon shifted, and by 1783 was used to describe men “from Great Britain to Virginia at different times” who were descended from convicts, and thus viewed as “scarcely human”. 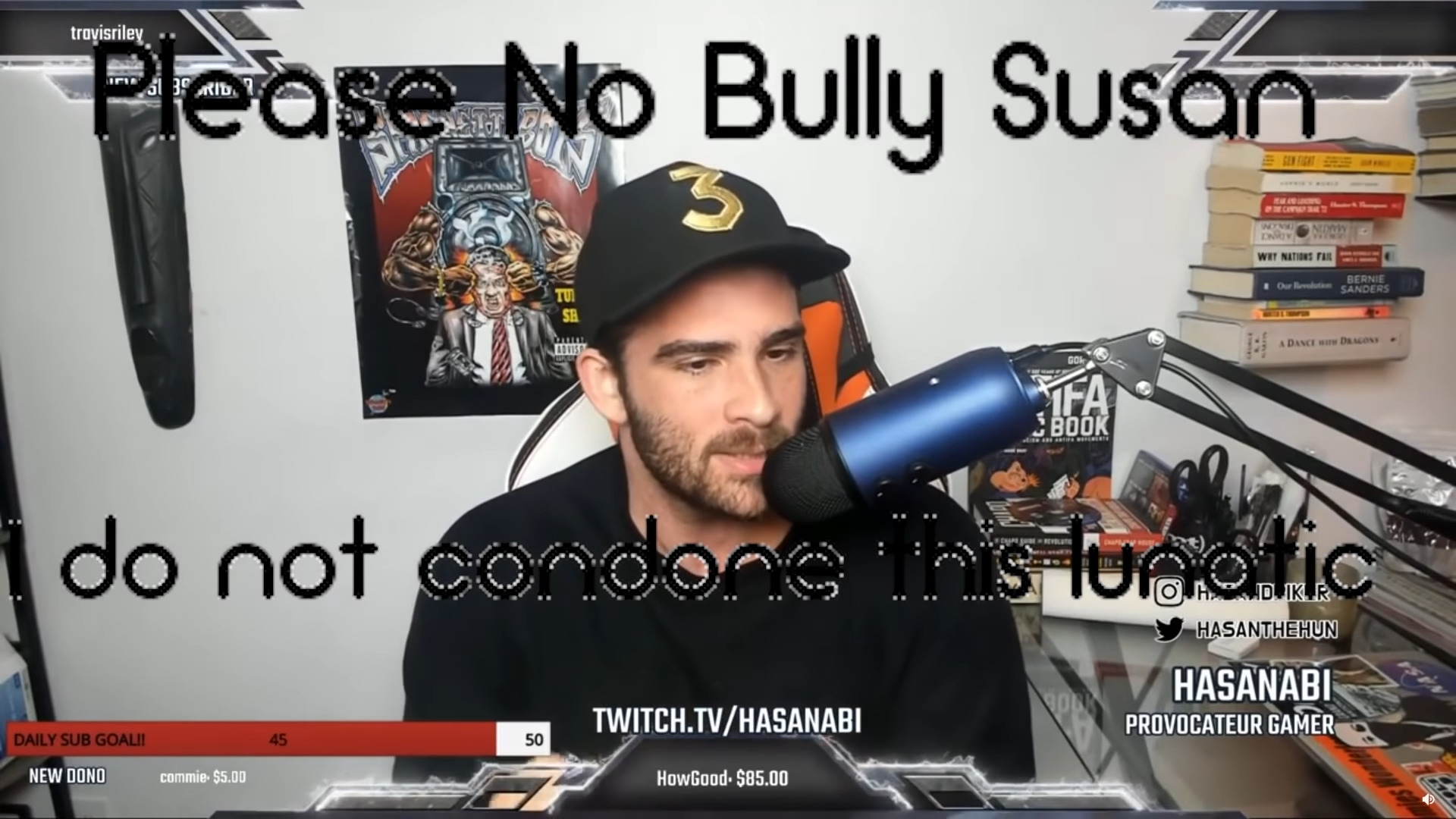 “That’s not what I said, you dumb cracker b—h!” Hasan retorted to a Reddit user, sealing his fate.

“I’ve been called a cracker more times than every single one of you f—–g pasty little cracker b—–s in my chat, OK?” Hasan continued. “Stop crying about this f—–g term, OK? Recognize that the person who is calling you a f—–g cracker is literally powerless. They’re doing it someone whose been historically oppressed blowing off steam.” 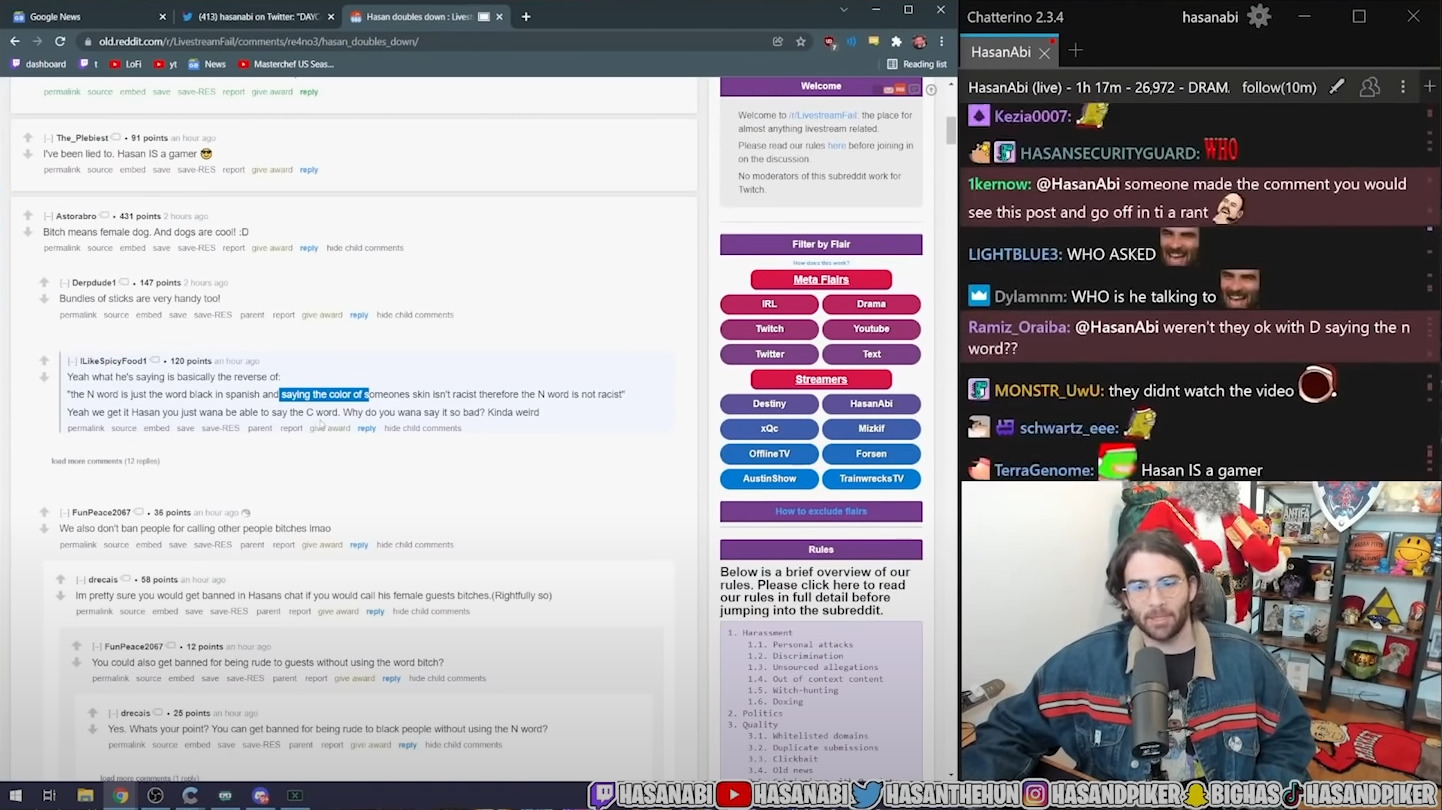 Meanwhile, Vaush’s ban seemed to originate from a general discussion about slurs held on stream, prompted by one of his viewers asking if Karen, a term regularly used in reference to an overly demanding white woman, was a slur. He agreed, and was happy to admit he would use it.

“Is cracker a slur?” Vaush read the question aloud. “Yes, and I’ll use it. Own that. Own that! Flex that, don’t run away from it.”

He died doing what he loved. pic.twitter.com/NYPvIyWFu6

Both then revealed they had been banned for using “Hateful Slurs or Symbols” [1, 2]. Hasan was apparently banned for seven days, while Vaush claims he was banned indefinitely.

Though Hasan has a sizable fan-base, it would seem there are plenty of those who either feel the bans for both him and Vaush were justified or had little pity for them due to their past comments.

In a tweet exemplifying this sentiment, @TheEbonyMaw wrote, “Hasan got banned from Twitch for saying the word ‘cracker’? That is f–king hilarious. It’s dumb. It’s wrong. People shouldn’t get banned for words. But that’s f—-ing hilarious.” 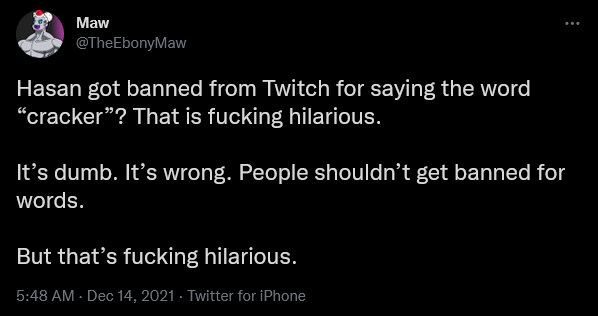 Vice reports this is Hasan’s third ban, having previously been banned in 2019 for saying  “America deserved 9/11, dude. F–k it, I’m saying it. We fucking totally brought it on ourselves, dude.”

While not cited as a reason for his ban, during that same stream, Hasan also took a swing at U.S. Representative Dan Crewnshaw’s support for overseas American military interventionism, decrying, “What the f–k is wrong with this dude? Didn’t he go to war and like literally lose his eye because some Mujahideen, a brave f–king soldier fucked his eye hole with their dick?”

Hasan also gained notoriety after the recent Twitch leaks when it was revealed that, despite heavily promoting socialism as the end-all-be-all economic system, he made $200,000 a month through Twitch and recently bought a living in a $2.74 million home in Hollywood. 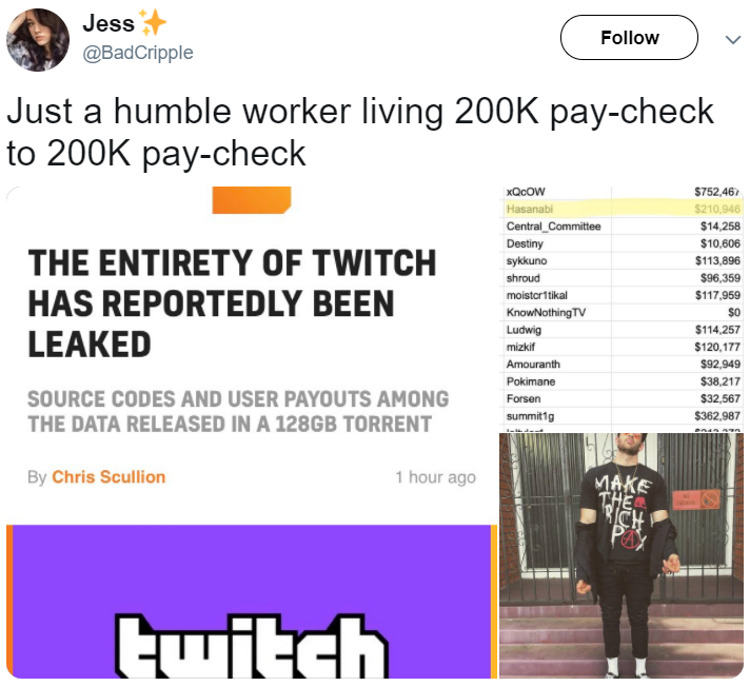 Vaush – whose body of work suggests a massive ego – also has plenty of infamy surrounding him.

Much of this has resulted from his holding of controversial beliefs – such his support for the changing of Western European culture through unchecked immigration and for allowing male-to-female transgender athletes compete in women’s sports (the basis of his argument being the fact that, by his own proud admission, a female-to-male transgender individual he once slept with was allegedly able to play rugby with other men before any testosterone treatment) – and the insulting of both fellow socialist content creators and anyone who challenges his worldview in any way. 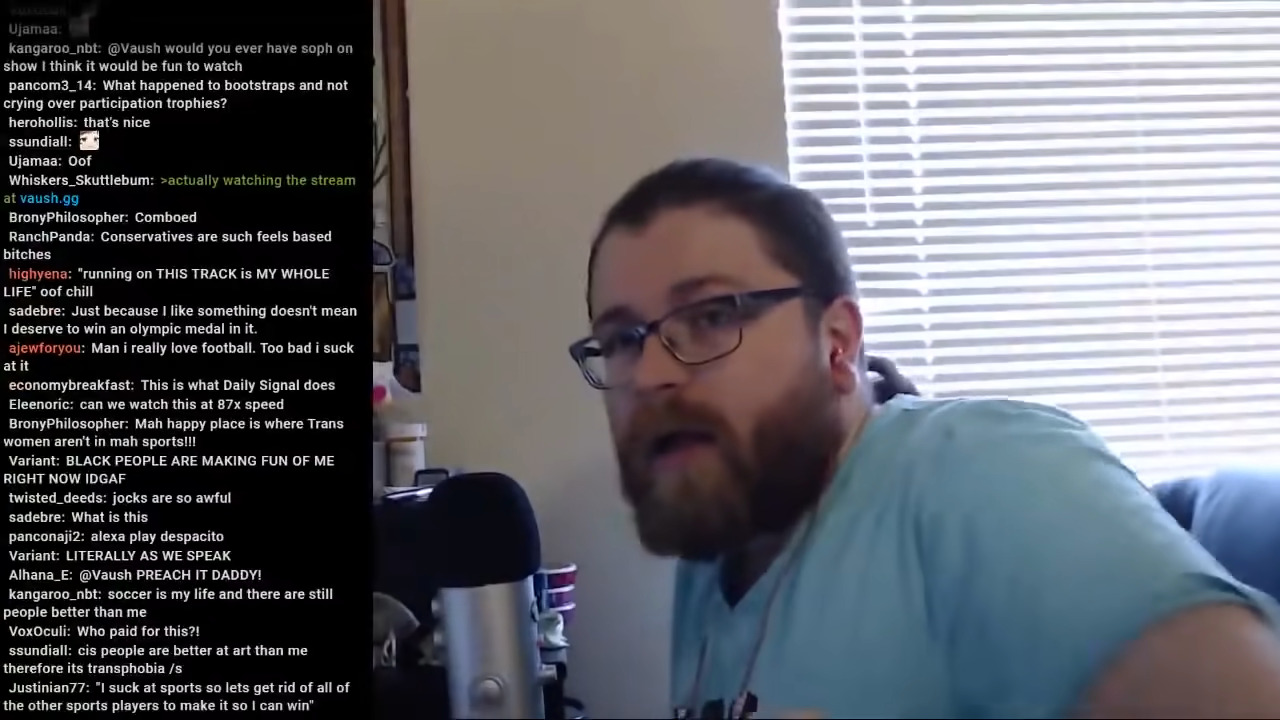 For example, while watching a video asking “Has The #MeToo Movement Gone Too Far?”, Vaush completely agreed with the women being interviewed when they asserted that there was a “rape culture” and that not enough was being done to prevent it.

However, when one of the women admitted to not reporting the crime, fearing it would not be taken seriously due to the fact that her attack was Middle Estearn, Vaush heel-turned and deemed her a racist pushing an anti-immigration agenda.

Other infamous Vaush statements include saying child pornography should be legal, as he had yet to hear “a convincing moral or legal argument” as to why it should be illegal, and a claim that Marxism was an extension of liberalism, not a rejection of it. He had also previously defended using the n-word in private and in a non-hateful context.

Vaush has also had conflicting opinions. Despite the aforementioned support of trans women in sports, an older clip shows him loathing trans individuals, especially when they are against him. 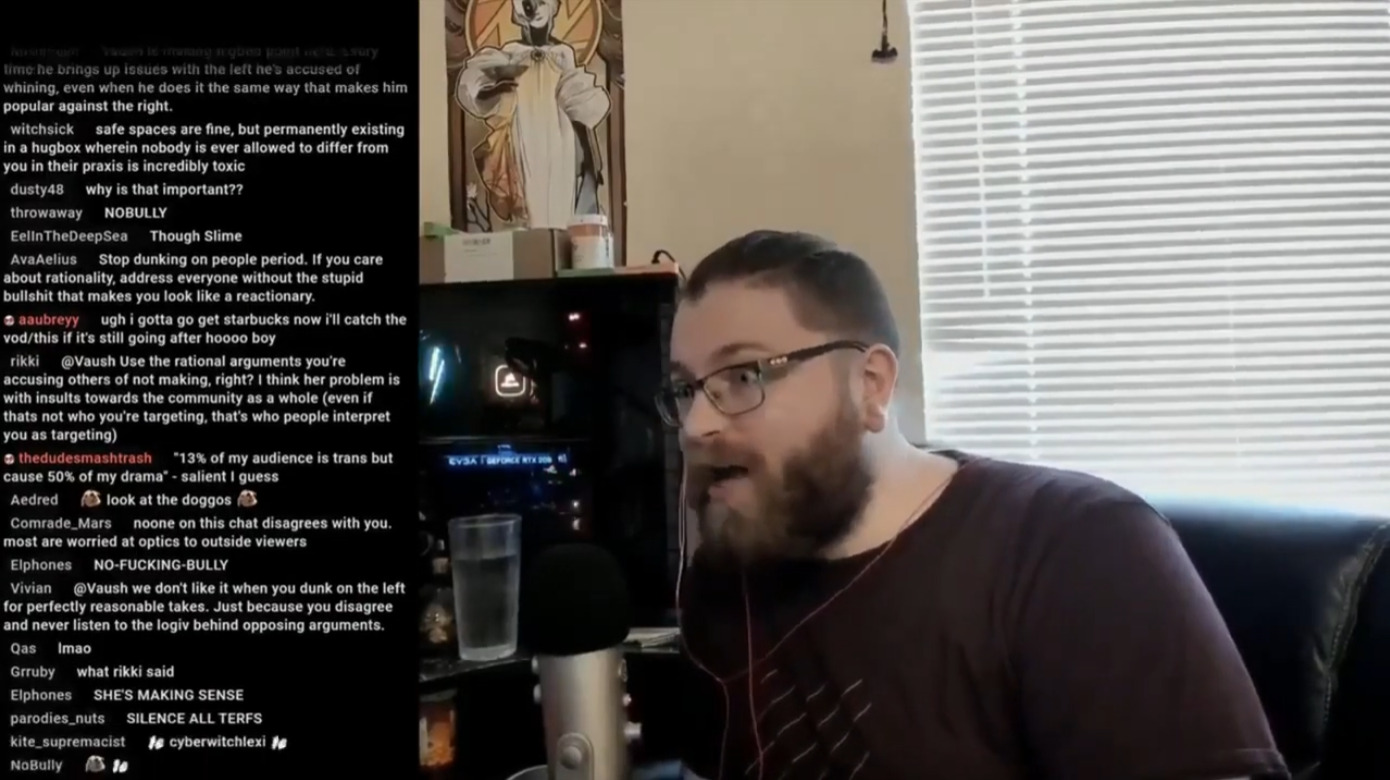 “When a wildly f—–g irrational lefty comes in to make bad-faith arguments against me, it’s a trans person. That is a fact,” Vaush stated. “If all of these dumb-f—s recognize that I despise them and think that they’re every bit as detrimental to the left as Nazis are, I am doing good. I want these people to know that they’re my enemy.”

When his guest pushed back and said that trans woman were not his enemy, Vaush exclaimed, “Yes they are! They hurt me, and they hurt you; because every time some dumb-f–k trans girl on Twitter, who’s acting out mental illness, whining and calling people like me transphobic because I disagree with them, they’re hurting the left. […] These people are ILL! They’re cancer! They’re subhuman!” 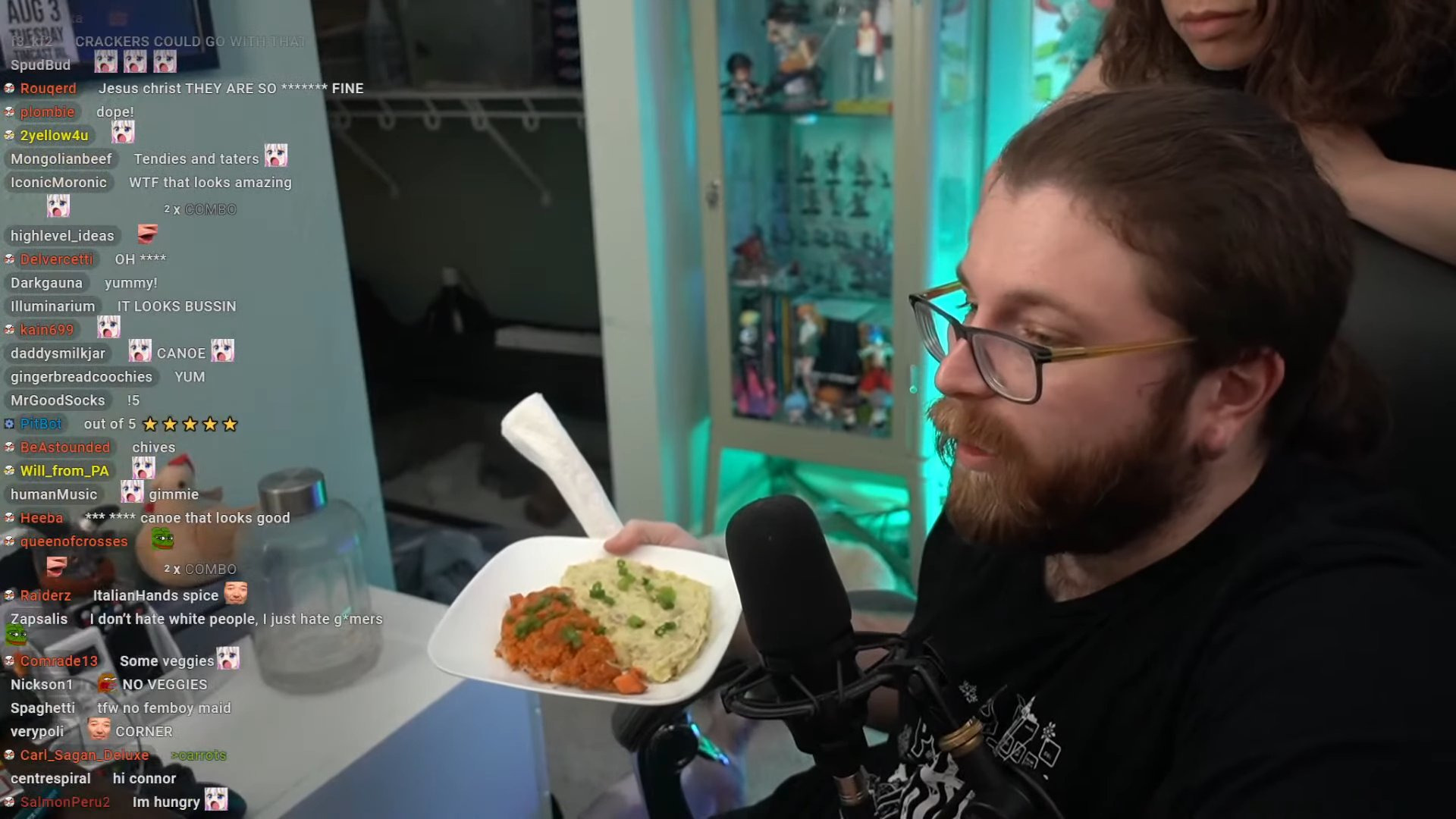 Further, Vaush’s approval of western cultures being changed by immigration was seemingly not mutual to white cultures, as when discussing black nationalists and preserving black culture, he stated “f–k black cul- I don’t give a f–k about preserving culture. What?? That’s exactly the same as a white ethno-nationalist argument.”

He also took issue with Iraqi socialist YouTuber Hakim for being critical of his beliefs in communism and Marxism. Vaush claimed Hakim was ignorant of American history and asserted that his opponent should be “lucky I personally got Biden into office.” He then said that he (or at least supporters of Biden) would get troops out of Iraq, and “stop bombing your airports,” before dismissing him, “You’re welcome Hakim!”

In the aftermath of the ban, neither of the streamers retired or reflected quietly.

Hasan continued to defend himself online, and repeatedly used the word cracker to insult others (or alluded to it) [1, 2, 3]. 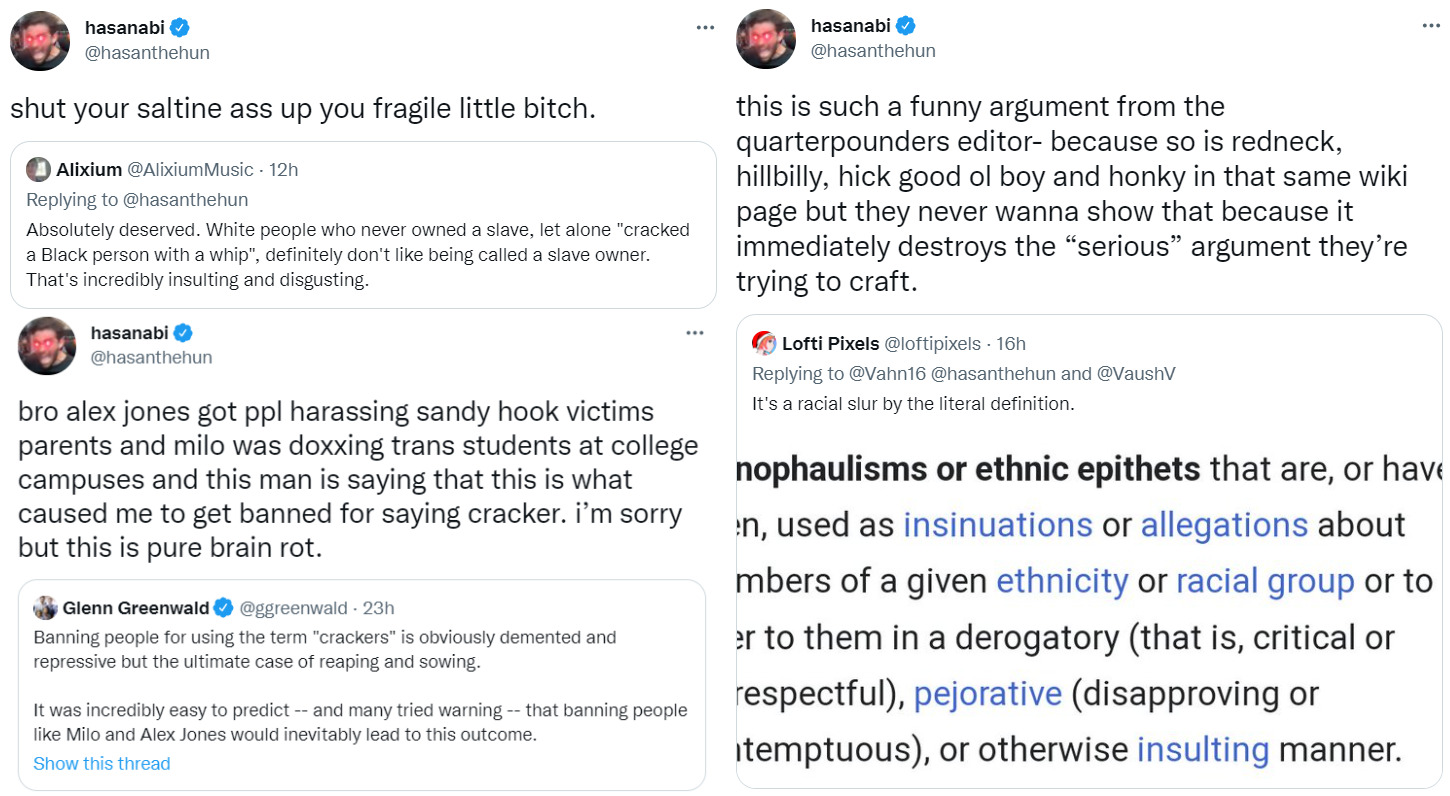 Even streamer Dream – the recent winner of The Game Awards 2021 Content Creator of the Year- pointed out the hypocrisy that he was not banned for not using the same slur.

Hasan also argued that “white people are oppressed, just on the basis of class – not race. whiteness is a made up concept by slavers who wanted to maintain arbitrary purity standards. this is why the entire argument is stupid – and you’re upset about the wrong thing.”

After saying this came from “a fellow crack*r,” he claimed when white races had been oppressed (including Germans, Irish, Ialian, Polish, and Jews), it was before they had been accepted into the dominant group of “whiteness.” 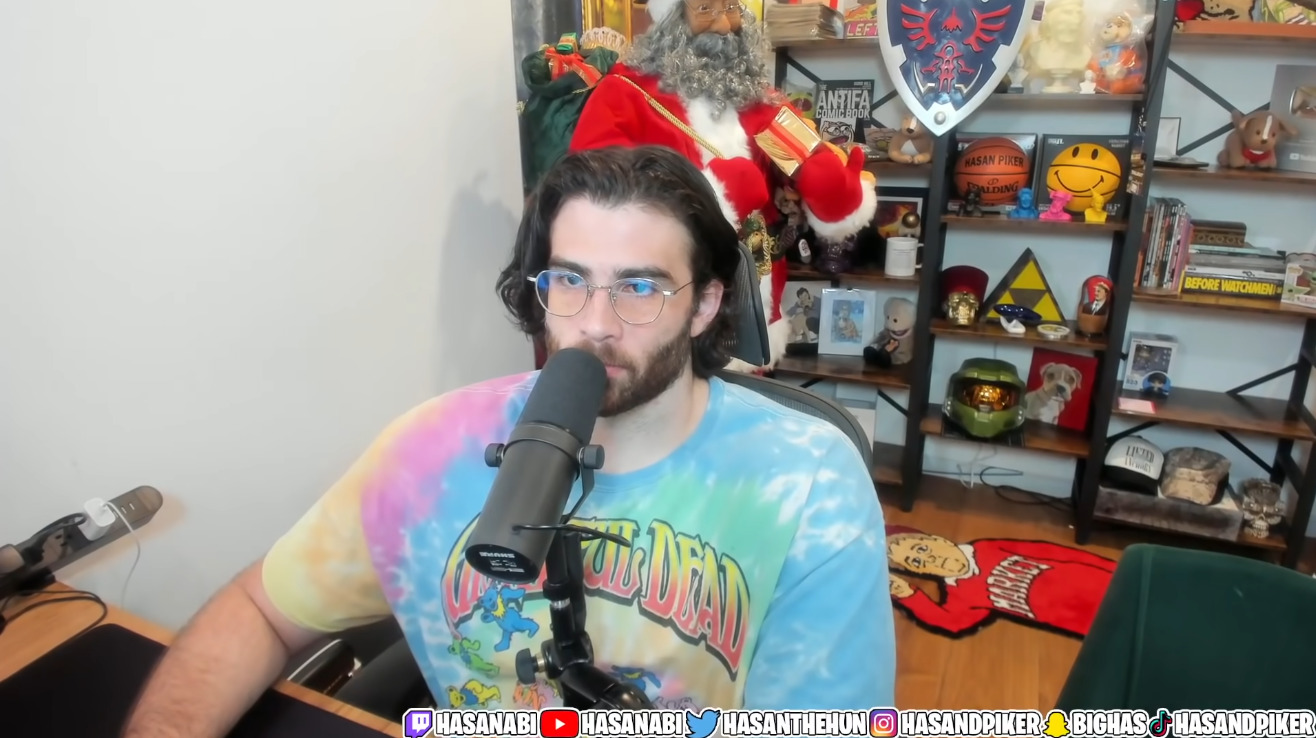 Discussing his ban on YouTube, Hasan continued to defend the slur, admitting, “Yeah, I know, it hurts your feelings most likely, OK? And sometimes it can be misappropriated- or misused- but ultimately, it’s not the same as a f—–g hateful bigoted slur, that’s the whole point.”

Definitely not upset by his ban, Hasan later posted a “cracker tier list” video on YouTube, wherein he put only Ritz crackers on the list, implying white people did not even rank. 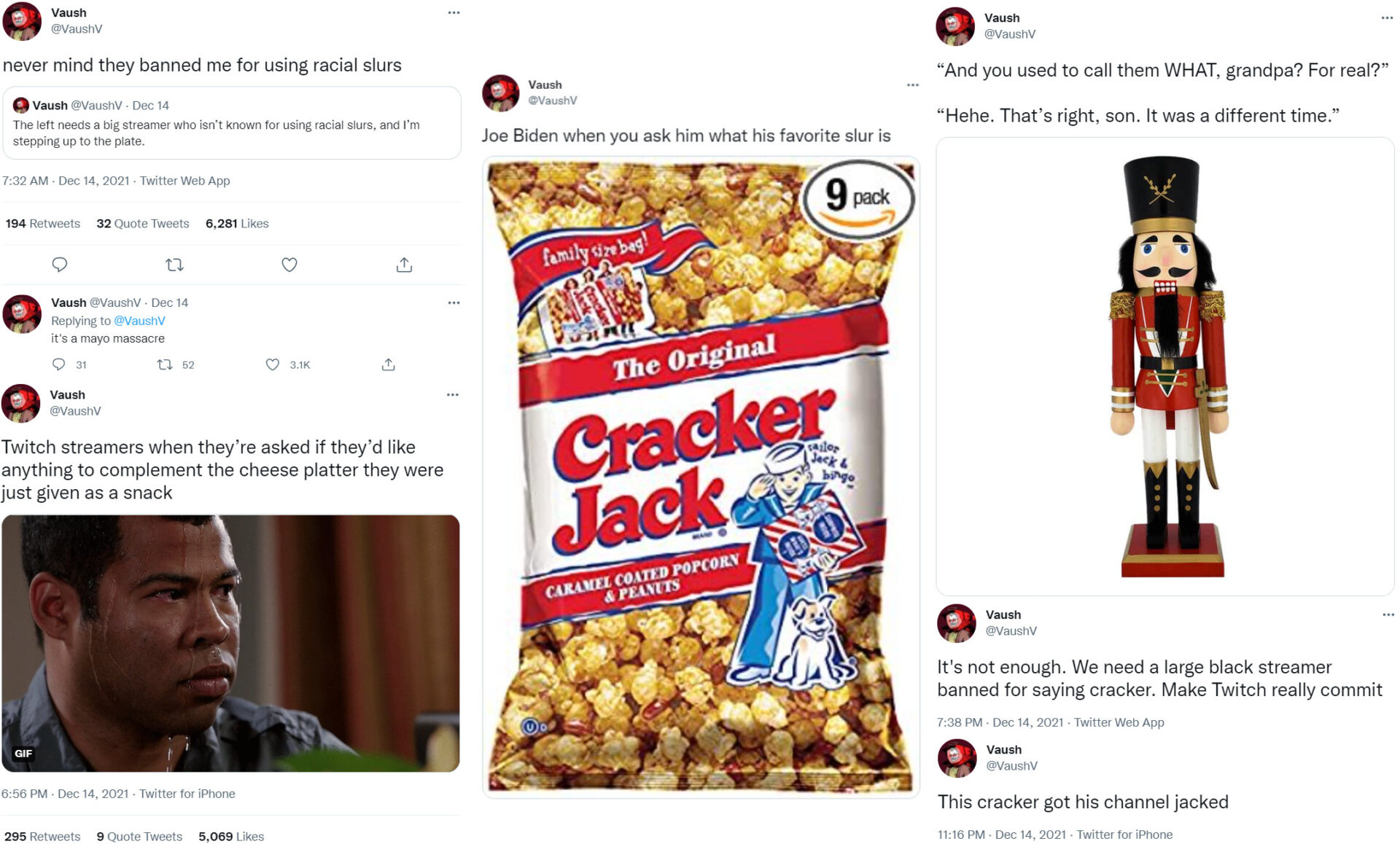 He also used the slur as an insult against Glenn Greenwald after the journalist and lawyer highlighted a clip of Vaush’s own argument against free speech.

In the clip, Vaush argues that free speech had no value if people were not held to account and arguing that, in order to “maximize any principle, you have to build walls around it” before further asserting that, like outlawing murder, censoring speech would make society more free.

As of writing, both Hasan and Vaush remain banned from Twitch.

What do you make of these two being banned from Twitch for using ‘cracker’ in a derogatory manner? Let us know your thoughts on social media or in the comments down below!