Mike Wellman, the proprietor of Atomic Basement Comics announced his store will be closing for good this month. 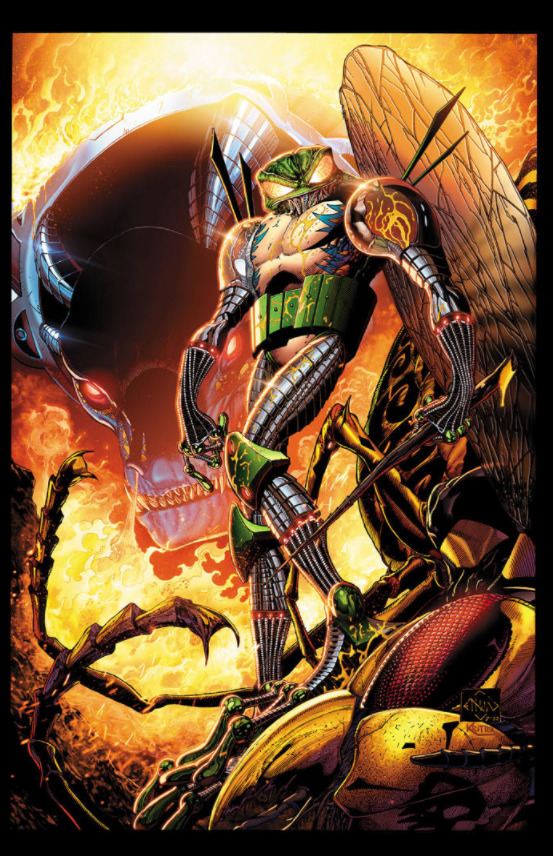 “I guess it has to be said with a heavy heart that Atomic Basement Comics and Creator’s Lab will be closing its doors in early January 2022,” Wellman said in an Instagram update.

“It sucks. But we have to pull the plug,” the update continued. “We did everything we could to keep it going and to be a haven and resource for not only our local independent comic community, but for comics at large!”

“Shutdown begins January 1st, 2022 and will go for the next week or two,” Wellman further said. “It pains me to leave this place and to, pretty much, say goodbye to this industry. It’s been a huge  part of my life. But I’m ready to venture out into something new and unexpected. That’s what keeps us fresh, right?” 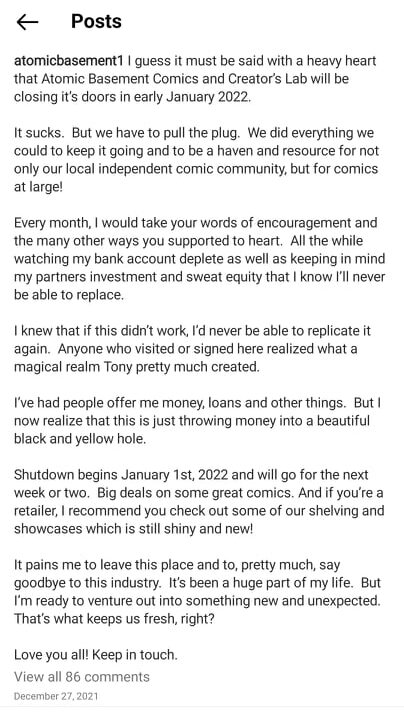 Wellman would later update his followers revealing he “tested positive for COVID last Sunday afternoon and have been in isolation ever since.”

He noted, “Symptoms are mild, so I will retest on Friday and hopefully be able to re-open on Saturday afternoon for one last blast with you all!”

“Until then, we will be closed for the safety of our customers and community,” he added. 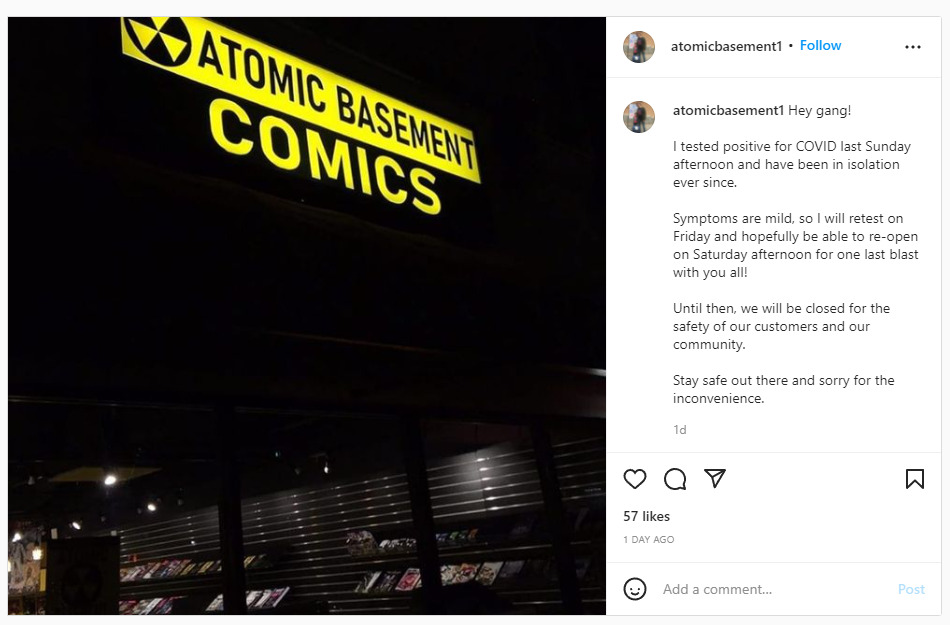 Wellman wrote, “I can’t wait to see you at a show Ethan and beat the living f*** out of you.”

In another post he wrote, “I am literally going to beat your ass! How dare you insult legends like Larry Hama as well as our industry itself.”

He added, “F*** you! I am a “libtard” with fists. You’re going to feel them the next we are at a convention together.”

Wellman reiterated, “I am going to beat the living f*** out of you in front of EVERYBODY!!!”

Wellman would conclude stating, “You’re such a little cowardly b****, Ethan Van Sciver. Let’s fight. Let me feed you a fist sandwich you little b****.”

Van Sciver would proceed to share direct messages where Wellman doubled down on his threats of physical violence and even threatened to murder him.

Wellman wrote to Van Sciver, “I’m coming to beat your ass, son. Why not make it a feature at an upcoming comic convention? Could be fun! I’m going to beat your ass either way. But let’s let people have an opportunity to enjoy me beating your ass in public, right?” 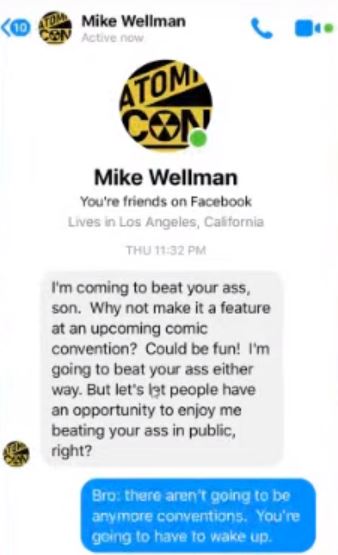 He then demanded Van Sciver provide him with his home address so he could “drive right up to your house and home deliver the a** whipping you deserve!” 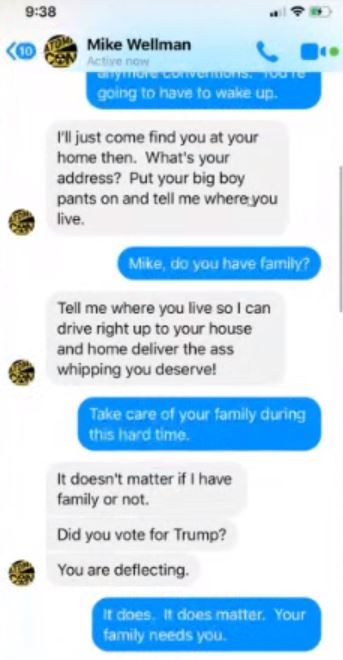 Van Sciver would share another screenshot of a message from Wellman, where the Atomic Basement Comics owner stated, “Give me your home address and give the police an actual reason to be concerned cuz I will come to your house and blow your f***ing face off your skull!!! That is a fact!” 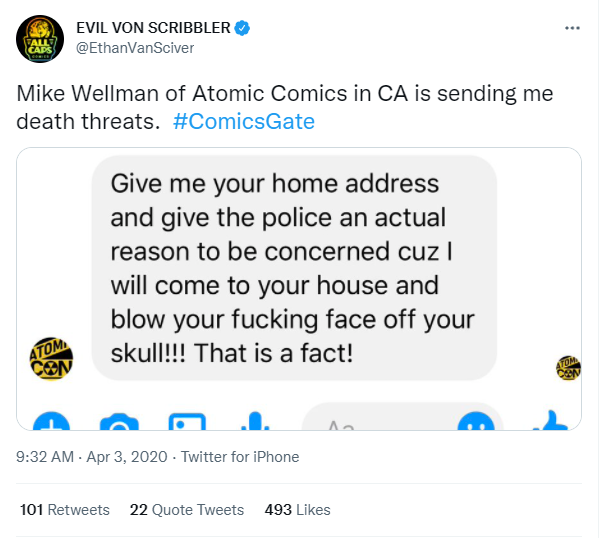 In response to Wellman announcing the closing of his store Van Sciver said he “hadn’t thought about this guy in a long time,” but a fan brought the news to his attention.

Van Sciver said he “hadn’t thought about this guy in a long time” but a fan brought the news to his attention.

He went on to say, “I can’t even guess why he thought that it was appropriate to take out whatever financial stresses he was enduring with his comic book store, which must have been on the verge of closing even back then a year ago.”

Van Sciver then relayed, “I do believe in God. I am a Christian. I do believe God’s watching out for me and I do believe people do receive punishment in this lifetime and the next for what they do on earth. I believe that’s going on.”

“And I also believe that a lot of these people who are endlessly abusive to us are doing so because they are miserable. There is something wrong. There are stressors that have nothing to do with me, or you, or any of us. Their lives are a living hell in many other ways and of course as they say, ‘Hurt people, hurt people,'” he said.

To close out his video, Van Sciver declared, “I want to cancel cancel culture and go ahead and let consequence culture flourish because that is justice. That is divine justice.”

“Sorry for this dude that he’s got his comic book shop shut down, but that’s what you get I guess,” he concluded. 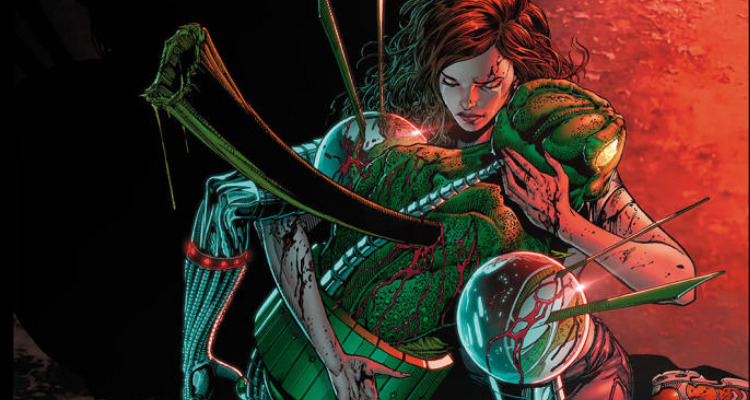 What do you make of Wellman’s store shutting down?