In an instance of ‘tell-don’t-show’ soapboxing that could rival even Marguerite Bennett’s worst moments, the latest issue of Savage Dragon sees creator Erik Larsen use the titular character to drop a page-long lecture in support of COVID-19 vaccinations. 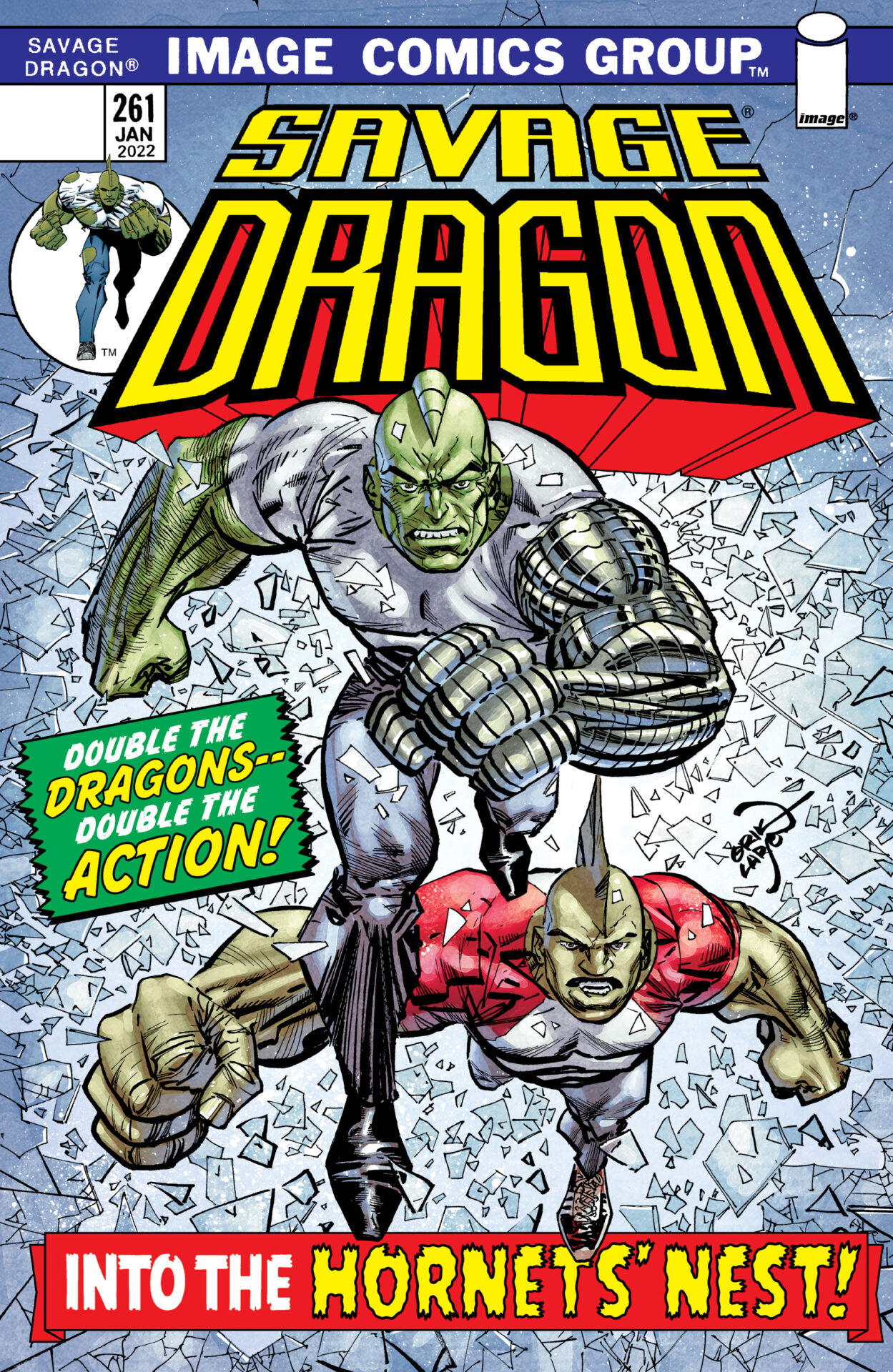 The moment quite literally comes out of nowhere, unrelated to the issue’s events, in the pages of Savage Dragon #261.

Picking up his children from the care of Paul Dragon and Alex Wilde after spending the evening at a Toronto Maple Leafs game with his wife Maxine, Malcolm Dragon proceeds to – seemingly late at night, judging by the starry sky depicted in the issue’s artwork – take the young ones to get publicly vaccinated, complete with media coverage, as part of what his associate Walden Wang believes “would be a good publicity stunt to help encourage more parents to get their kids vaccinated.” 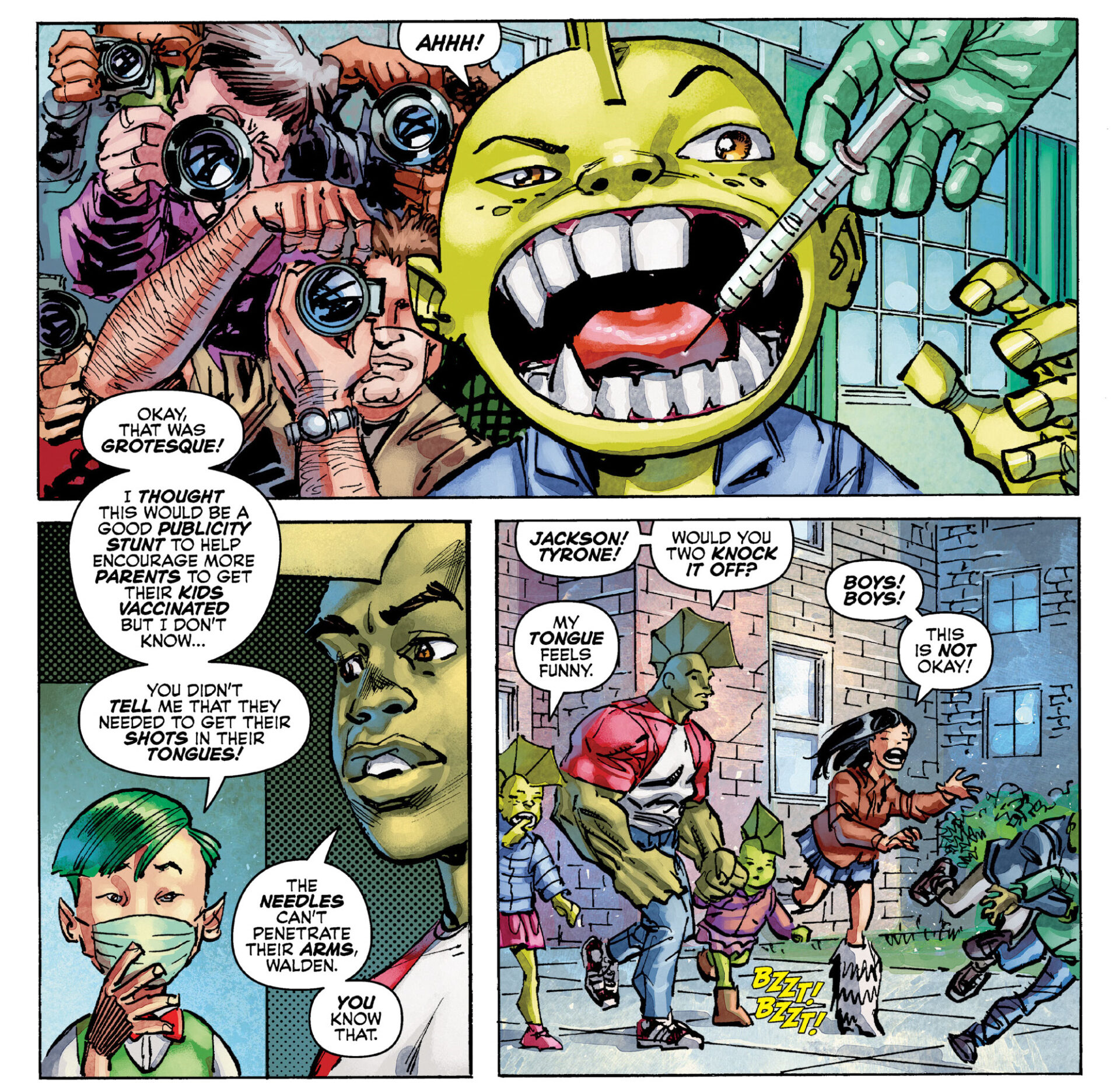 Soon after his children are vaccinated, Malcom receives a phone call, picking it up to find his half-sister, Marsha Bradley, on the other line.

Upon being asked by Malcom what’s going on, Marsha reveals, “It’s Sara, Malcolm. She’s in the hospital on a ventilator. She’s got COVID and it’s not looking good.”

“We were hoping maybe to get some of your blood and Freak Out and do one of those magic acts like you pulled with Maxine and Angel,” she explained, referencing two previous instances where blood transfusions from Malcolm saved the lives of his loved ones. 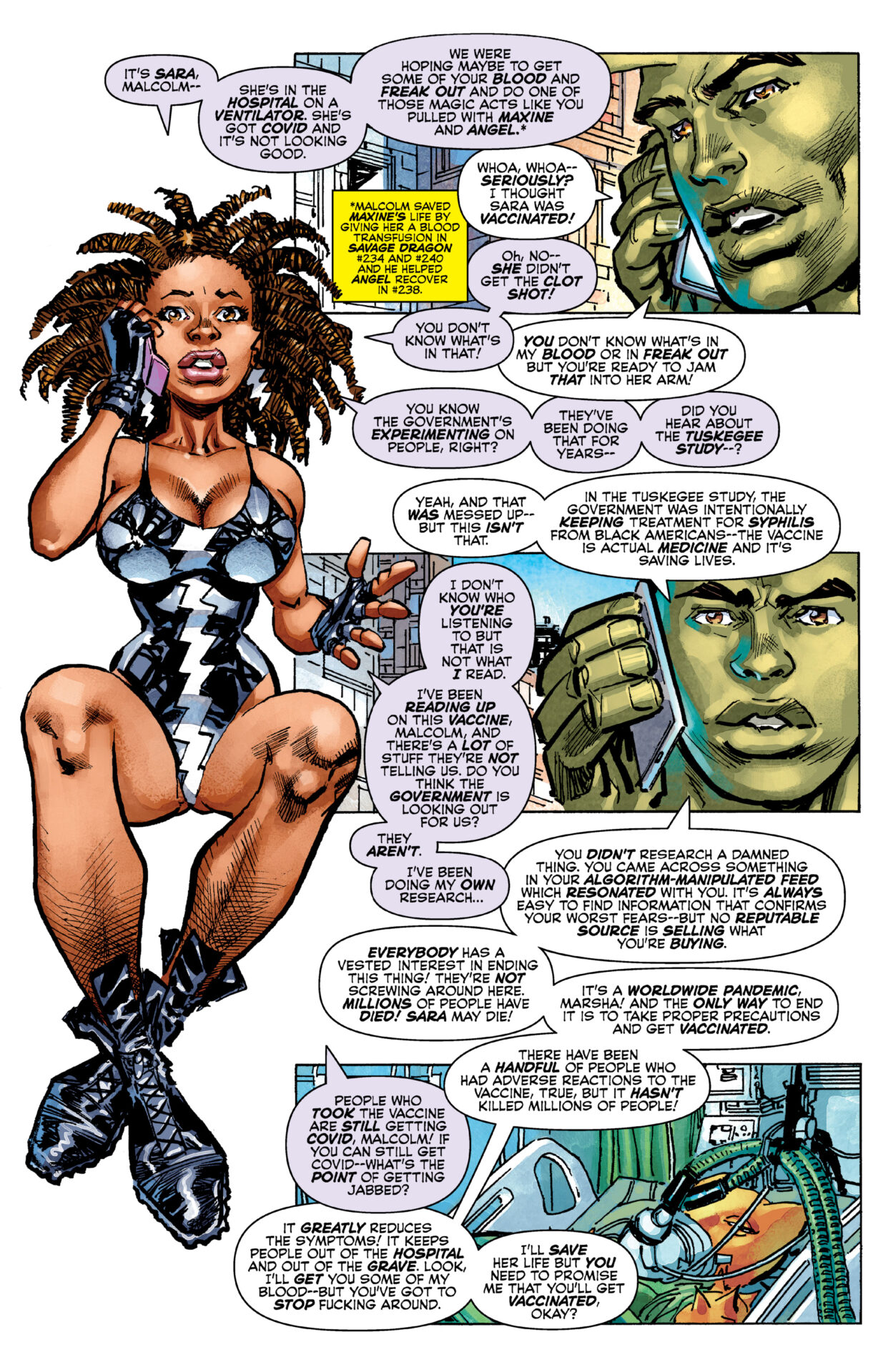 Angry, Malcolm proceeds to chastise his sister, arguing, “You don’t know what it’s in my blood or in Freak Out but you’re ready to jam that into her arm!”

“You know the government’s experimenting on people, right?” responds the lightning powered superheroine. “They’ve been doing that for years-Did you have about the Tsukegee Study?”

“Yeah, and that was messed up, but this isn’t that,” says Malcolm. “In the Tsukegee Study, the government was intentionally keeping treatment for syphilis from black Americans-the vaccine is actual medicine and it’s saving lives.”

It should be noted that while the Tuskegee Study was conducted upon individuals who already had syphilis, the US government also lied to the participants about the exact nature of the remedies they were being given, often administering placebo or ineffective doses of medicine in order to allow the experiment to continue unabated. 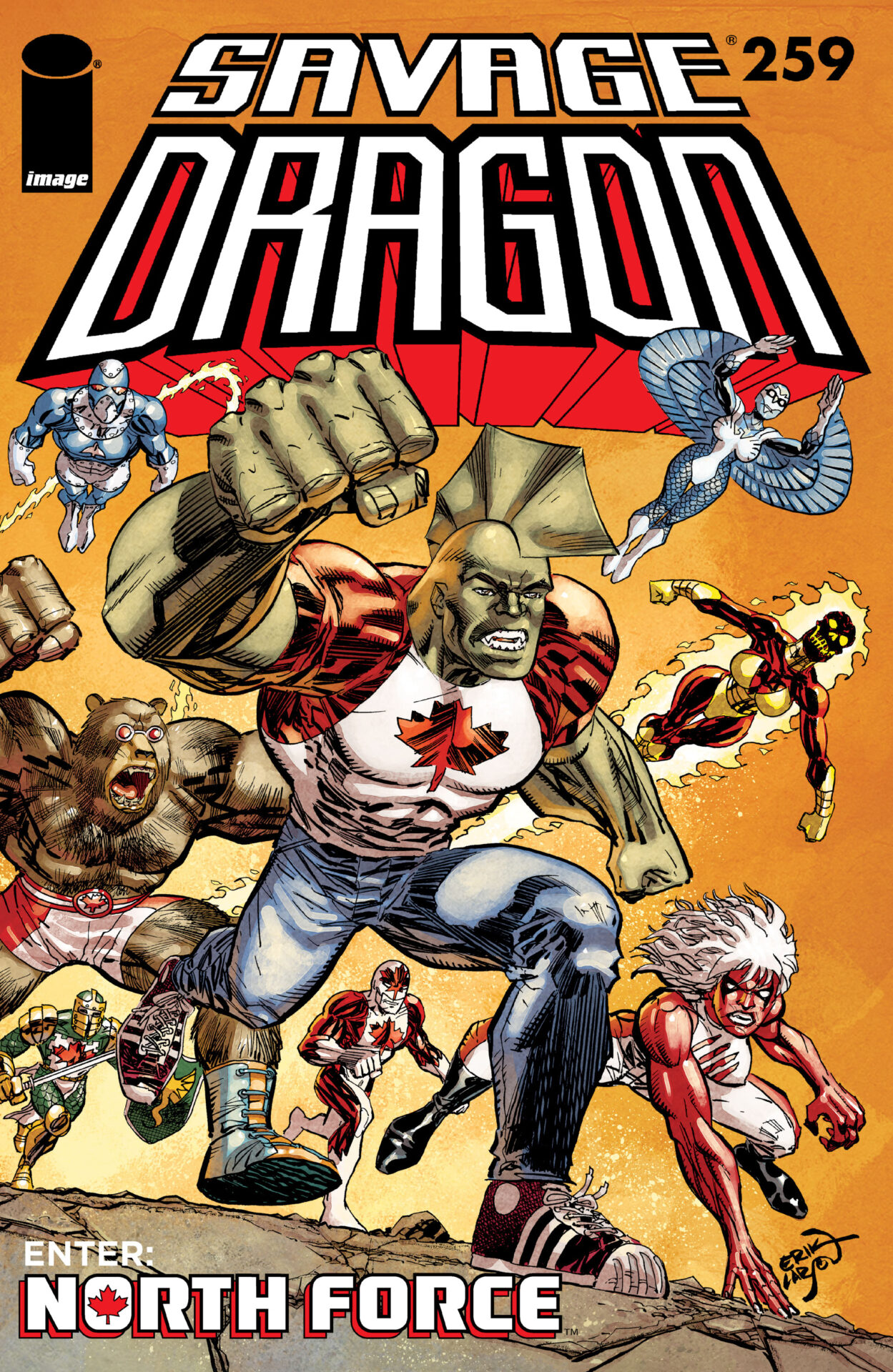 “I’ve been reading up on this vaccine, Malcolm, and there’s a lot of stuff they’re not telling us,” Marsha continues. “Do you think the government is looking out for us? They’re aren’t. I’ve been doing my own research.”

Malcolm then cuts her off, firing back, “You didn’t research a damned thing.”

“You came across something in your algorithm-manipulated feed which resonated with you,” he adds. “It’s always easy to find information that confirms your worst fears – but no reputable source is selling what you’re buying.”

“Everybody has a vested interest in ending this thing!” exclaims her brother. “They’re not screwing around here. Millions of people have died! Sara may die! It’s a worldwide pandemic, Marsha! And the only way to end it is to take proper precautions and get vaccinated. There have been a handful of people who had adverse reactions to the vaccine, true, but it hasn’t killed millions of people!” 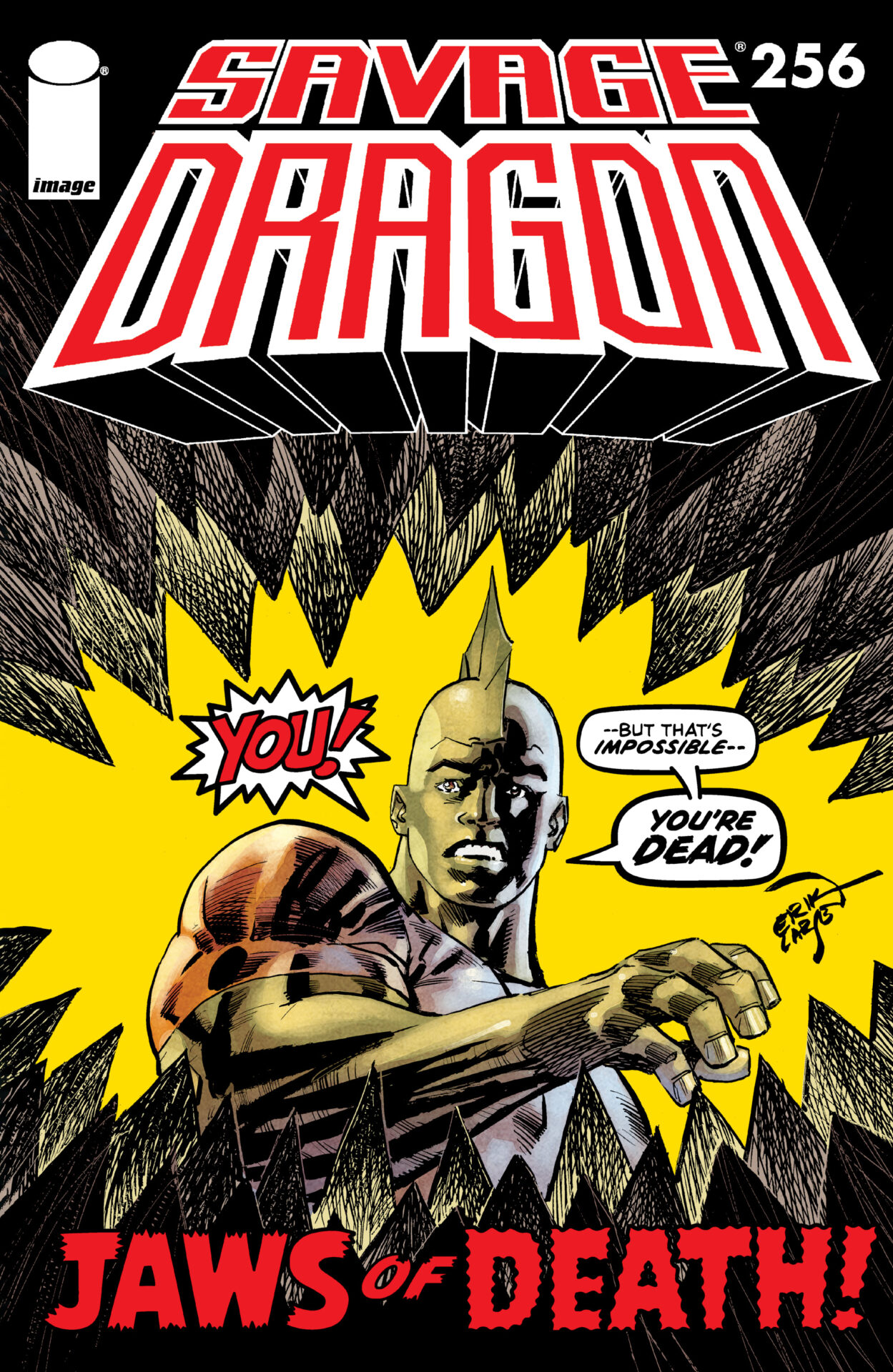 Undeterred, Marsha replies, “People who took the vaccine are still getting covid, Malcolm! If you can still get get covid, what’s the point of getting jabbed?”

“It greatly reduces the symptoms! It keeps people out of the grave,” asserts Malcolm, before ultimately relenting to his sister’s request. “I’ll get you some of my blood-but you’ve got to stop f—ing around. I’ll save her life but you need to promise me that you’ll get vaccinated, okay?” 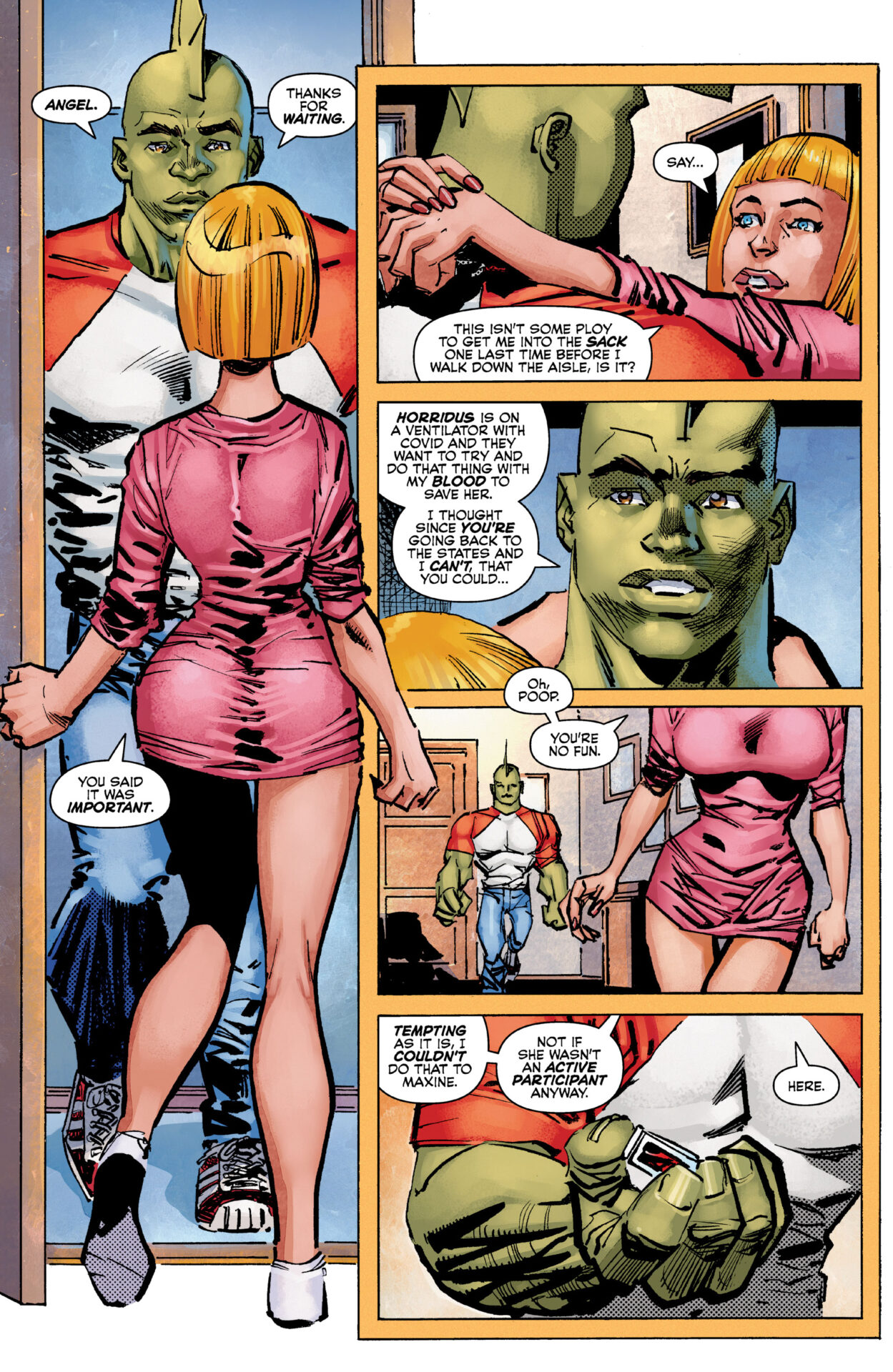 Going on for one more page, wherein Malcolm asks Angel Murphy – otherwise known as Battle Girl – to deliver his blood to Marsha and Sara, the covid ‘storyline’ then completely disappears, with the issue then immediately returning to Paul and Malcolm’s fight against the Vicious Circle. 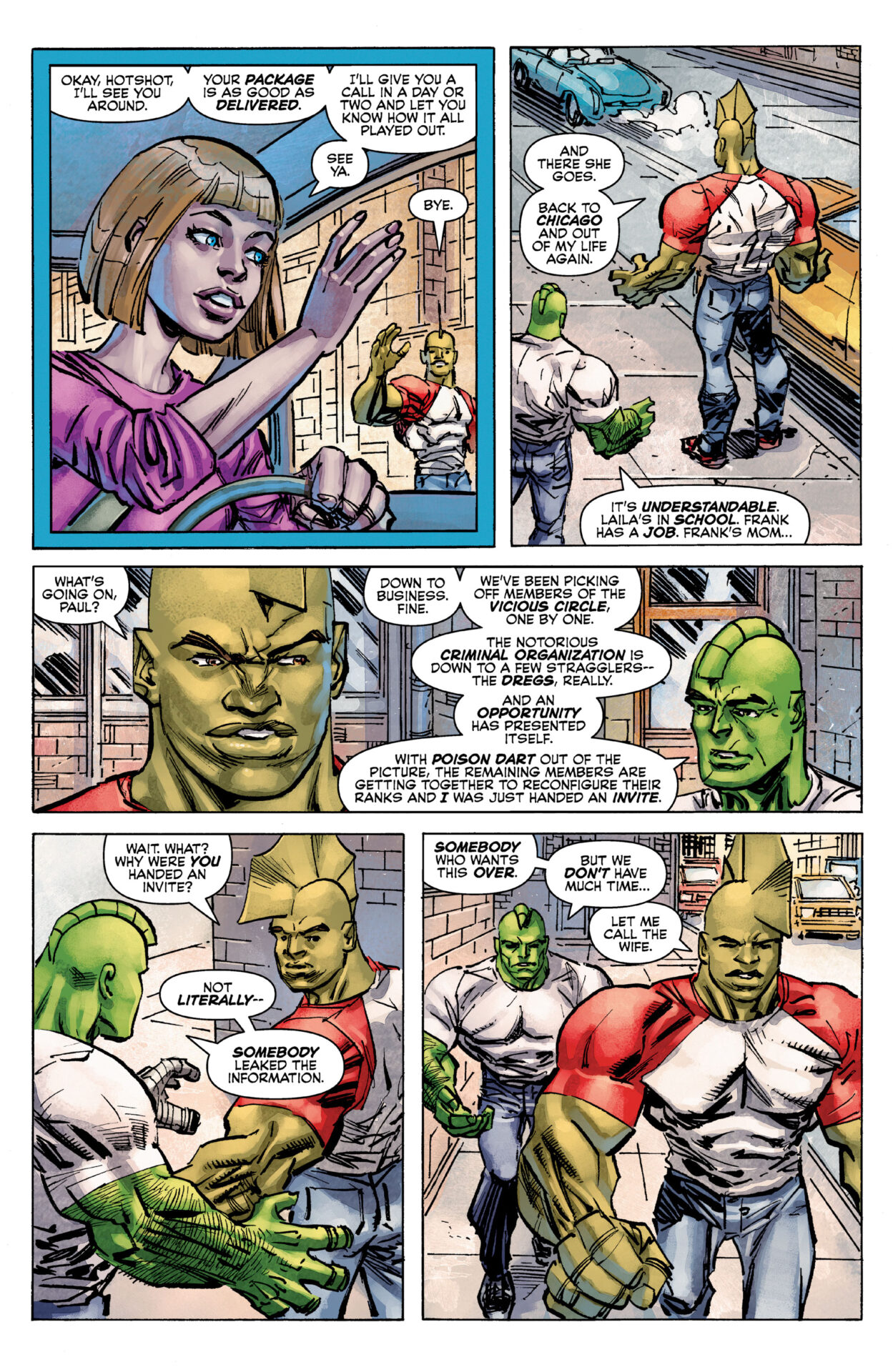 What do you make of the vaccine-related interlude in the latest issue of Savage Dragon? Let us know your thoughts on social media or in the comments down below!

NEXT: Image Comics Founder Erik Larsen Calls For “Numbskulls” Who Refuse COVID-19 Vaccine To Be Made “Social Pariahs”