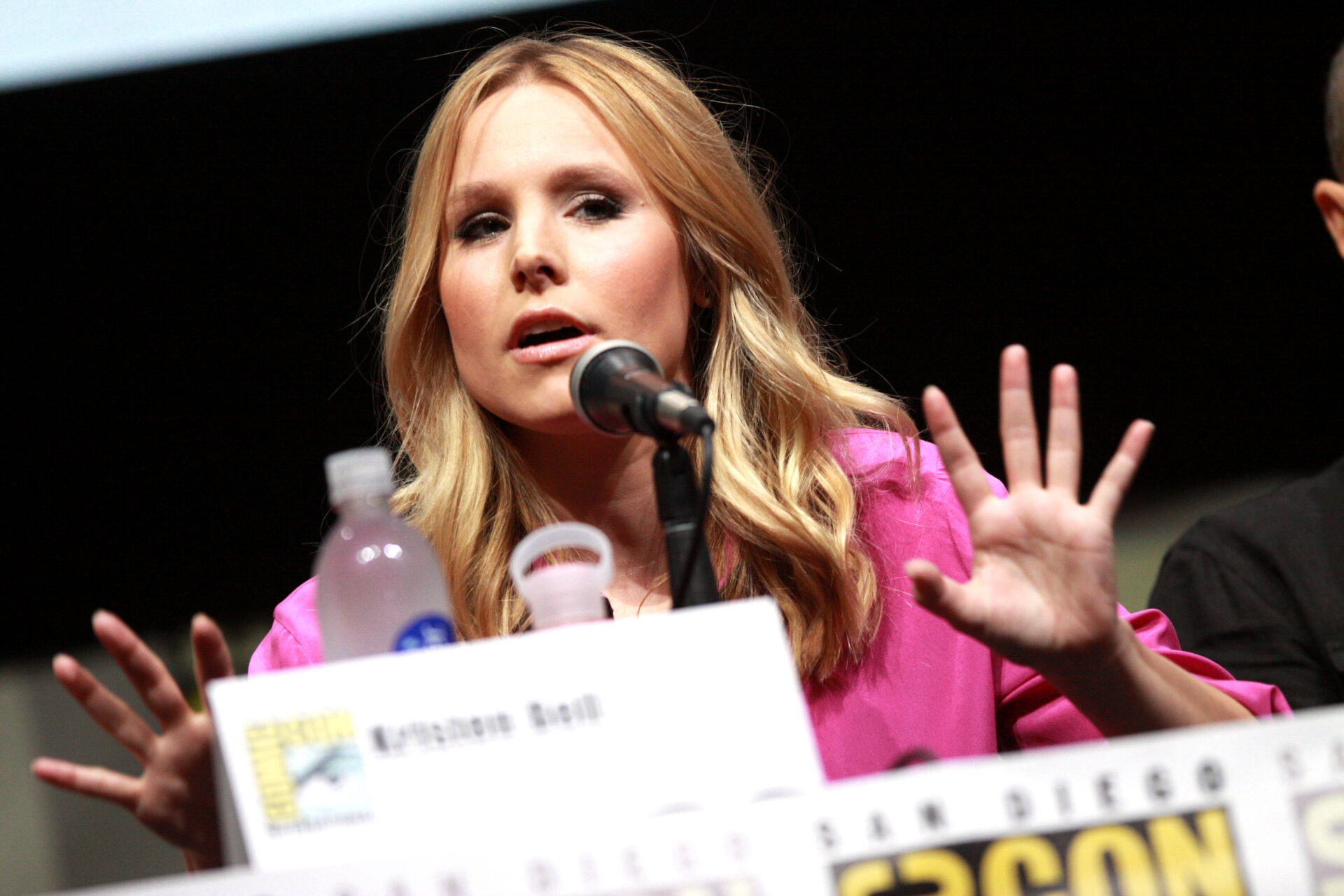 She appeared in the PSA with a number of other celebrities as part of the #ITakeResponsibility campaign. In the PSA, Bell reads part of a script where she says, “For every time it was easier to ignore than to call it out for what it was.” She would also declare, “I stand against hate.”

Another part of the script read by Julianne Moore states, “I take responsibility. Black people are being slaughtered in the streets killed in their own homes. These are our brothers and sisters.”

Also in June 2020, Bell participated in the Blackout Tuesday protest posting to Instagram, “You might see some interviews tomorrow that I recorded days ago and I tried to have removed. I don’t have control of that but do have control of this platform where I will be standing down, closing my mouth and opening my ears.”

She would then share a post from her writing partner Benjamin Hart who declared, “Tomorrow will be a day for a continued acknowledgement the systemic racism plaguing our country and the need for justice. Tomorrow I will be supporting #blackouttuesday and I hope you will too.” 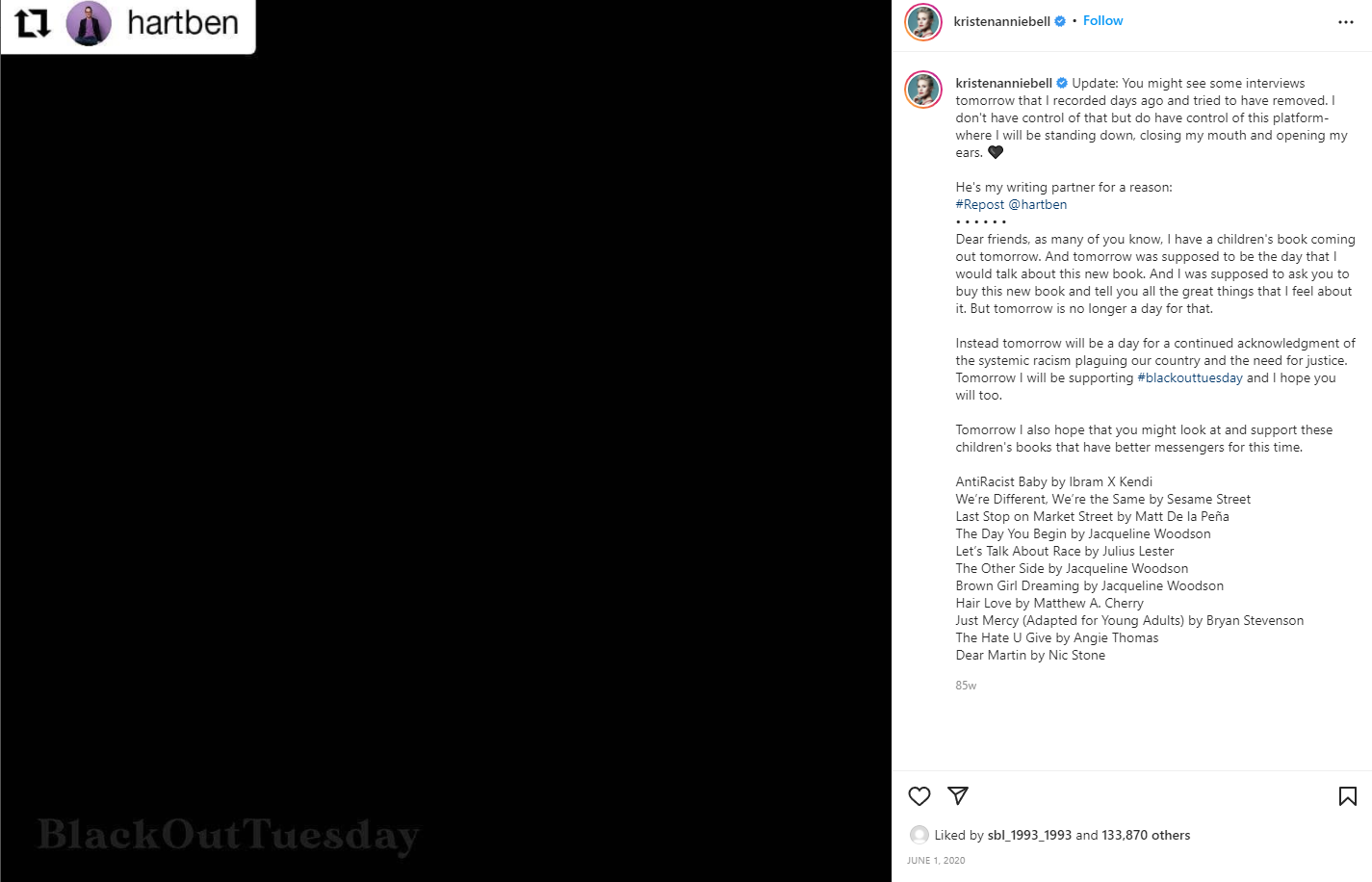 Bell has also shared videos claiming America is systemically racist. She’s also declared that she will raise her kids as racists in the guise of anti-racists.

As reported by People, Bell appeared on The Morning Beat where she said, “Because I will — you can put it on my gravestone — I will raise anti-racists. I will talk about it with them forever.”

Clearly, Kendi is endorsing discrimination based on what one’s skin color is. 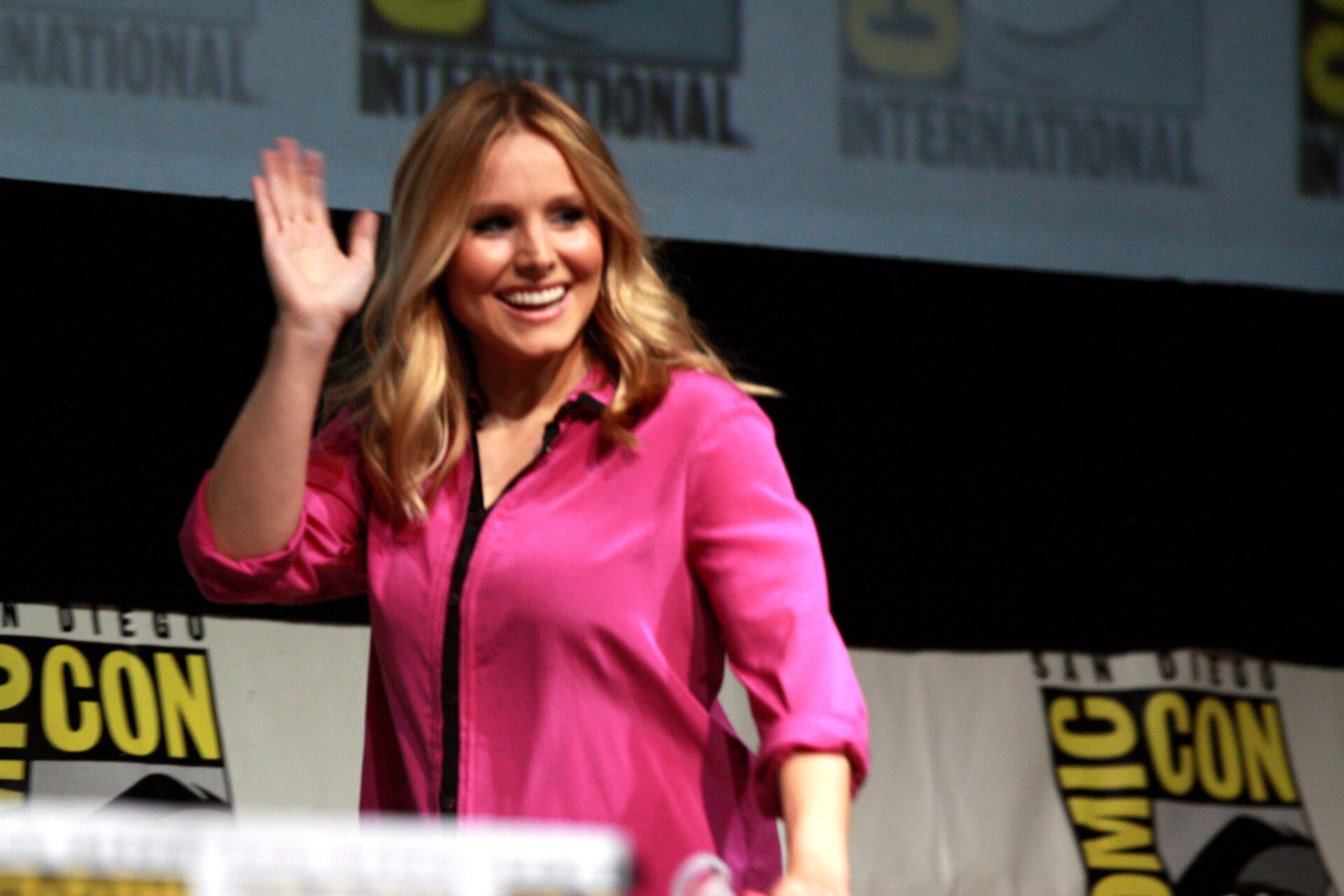 Despite her rhetoric, Bell pissed off Black Lives Matter and anti-police activists when she posed for a number of photos with The Los Angeles County Sheriff’s Department.

They tweeted, “Today, we had the absolute pleasure of meeting Kristen Bell, who was hands down, the kindest human ever.”

“There truly never is a dull moment at Lancaster!”, they added. 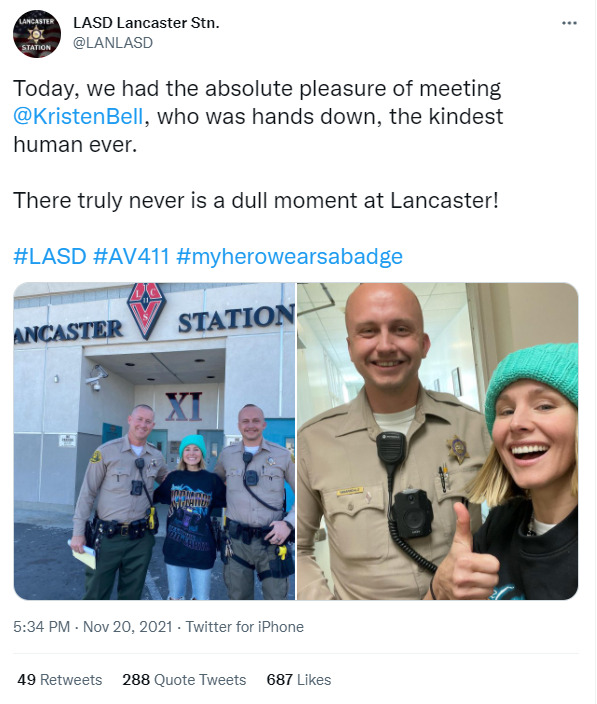 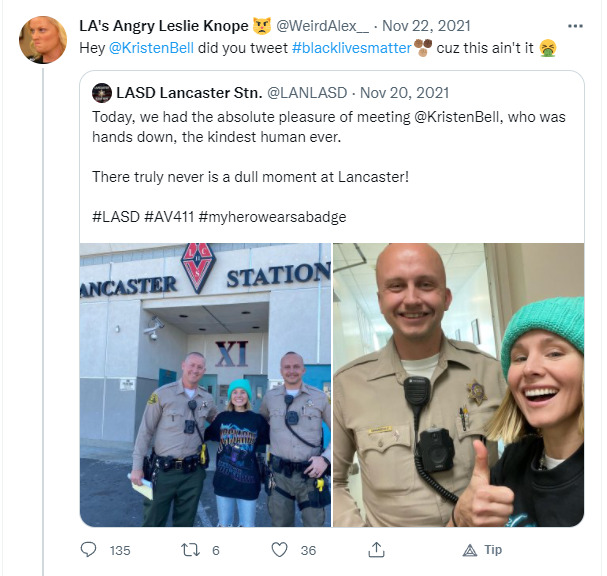 The user would add, “Believing Black Lives Matter and Being Pro Cop are 100% at odds with each other.” 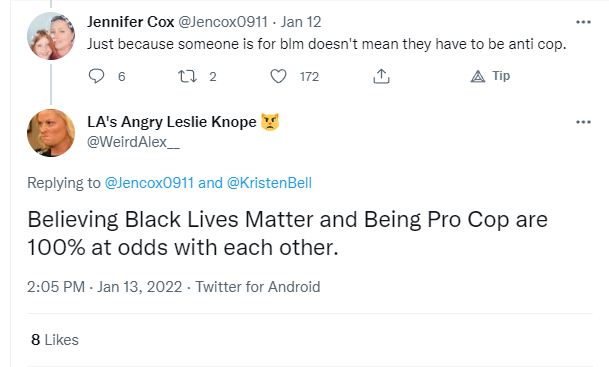 Another user tweeted, “remember last summer when people were all over Twitter claiming to support Black Lives Matter due to increased police aggression during a time of near complete lock down…and remember how none of those police forces changed…yeah this shows how much that solidarity meant.” 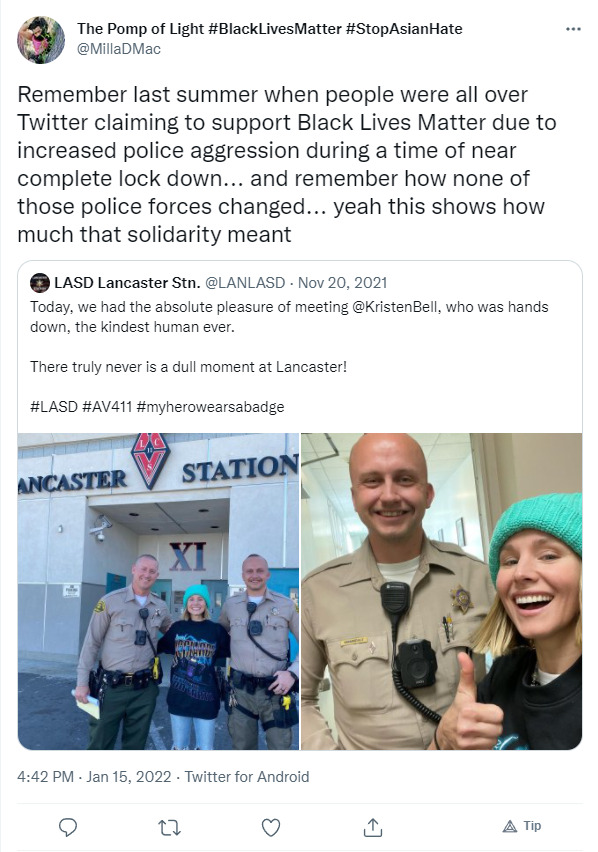 “Raising your kids to be anti racist doesn’t look like this Kristen Bell Dax Shepard and neither does ‘supporting’ BLM,” tweeted natashabarnes78. 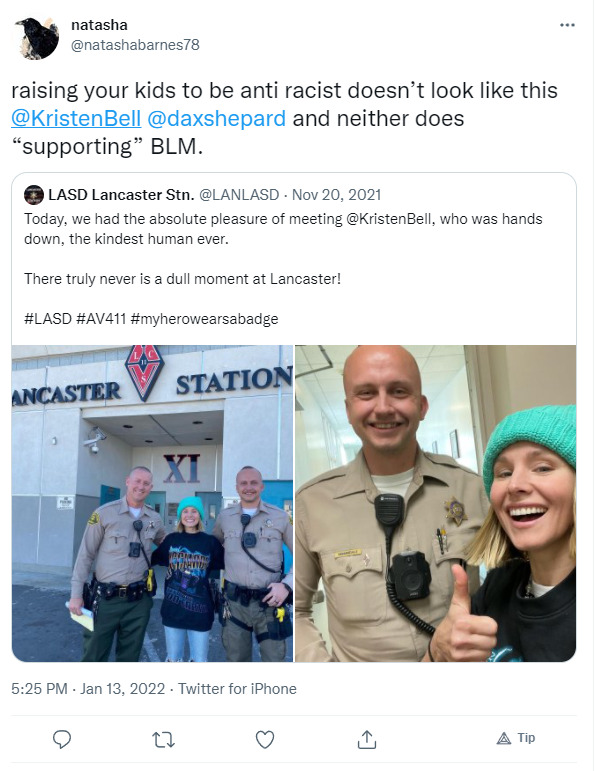 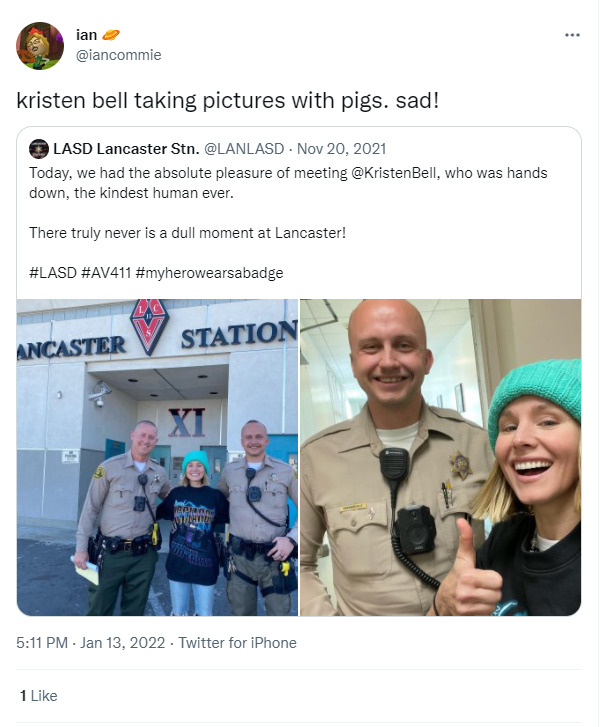 Another tweeted, “This sucks soooooo much, Kristen. Jesus Christ.”

User richardknieriem tweeted an image with an arrow pointing at “Critical High Yikes.” 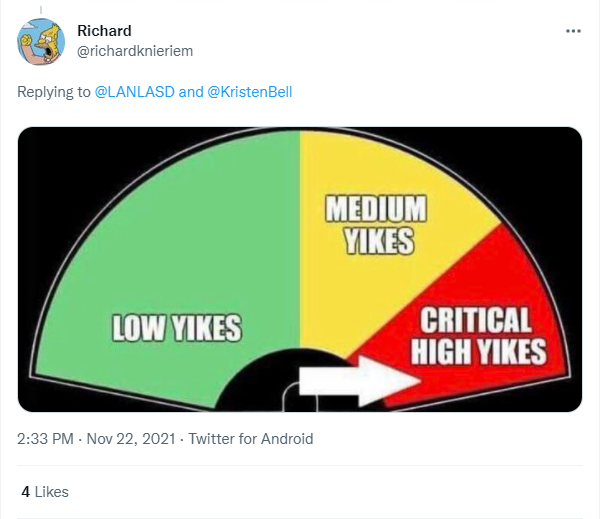 TreySparksX tweeted, “I knew somethin seemed off with her… .” The user then included four trash can emojis.

Andrea6Mitchell tweeted out a gif of Bell saying, “This is the bad place!” 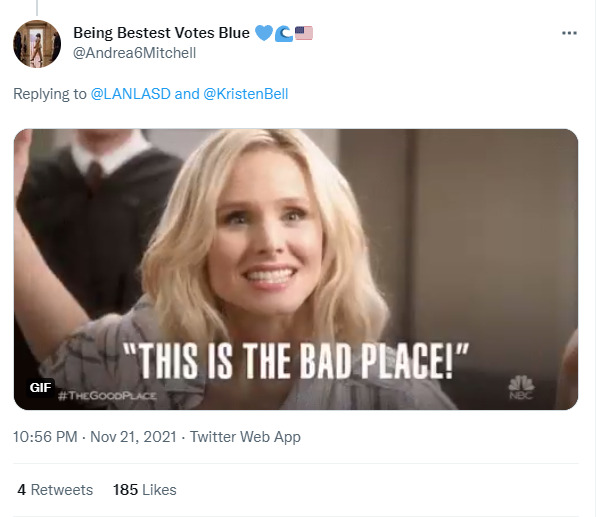 “Kristen Bell, well, this is yet another painful ding in my faith in my fellow citizens. These hits are rolling in multiple times a day now,” tweeted Tigereve7.

The user added, “‘The Good Place’ brought up so much to ponder. How’d it miss reaching you?” 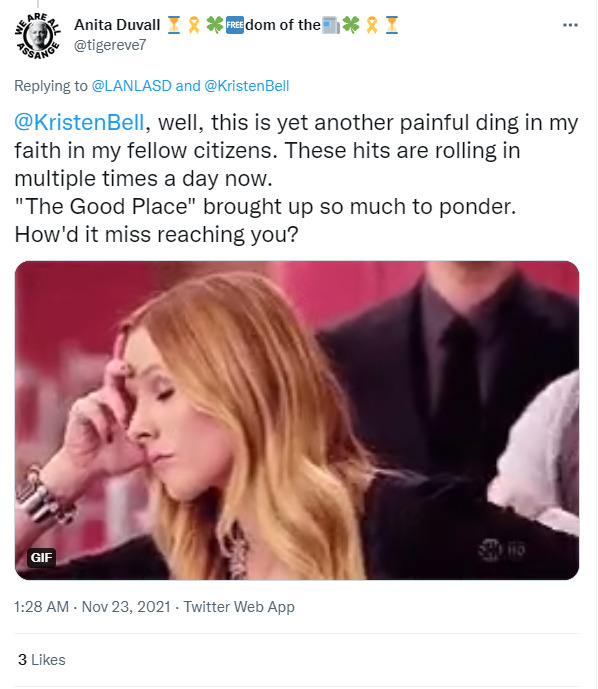 What do you make of these Black Lives Matter and anti-police activists getting angry at Kristen Bell?

NEXT: Ricky Gervais Asserts People Are Getting Sick Of Celebrities Using Their Influence To Virtue Signal: “The People With Nothing Became Tired Of Being Lectured By People Who Had Everything”