Following complaints over the inclusion of gay and transgender pride flags on in-game billboards, the developer of Buck Up And Drive! has told those outraged to “cope”. 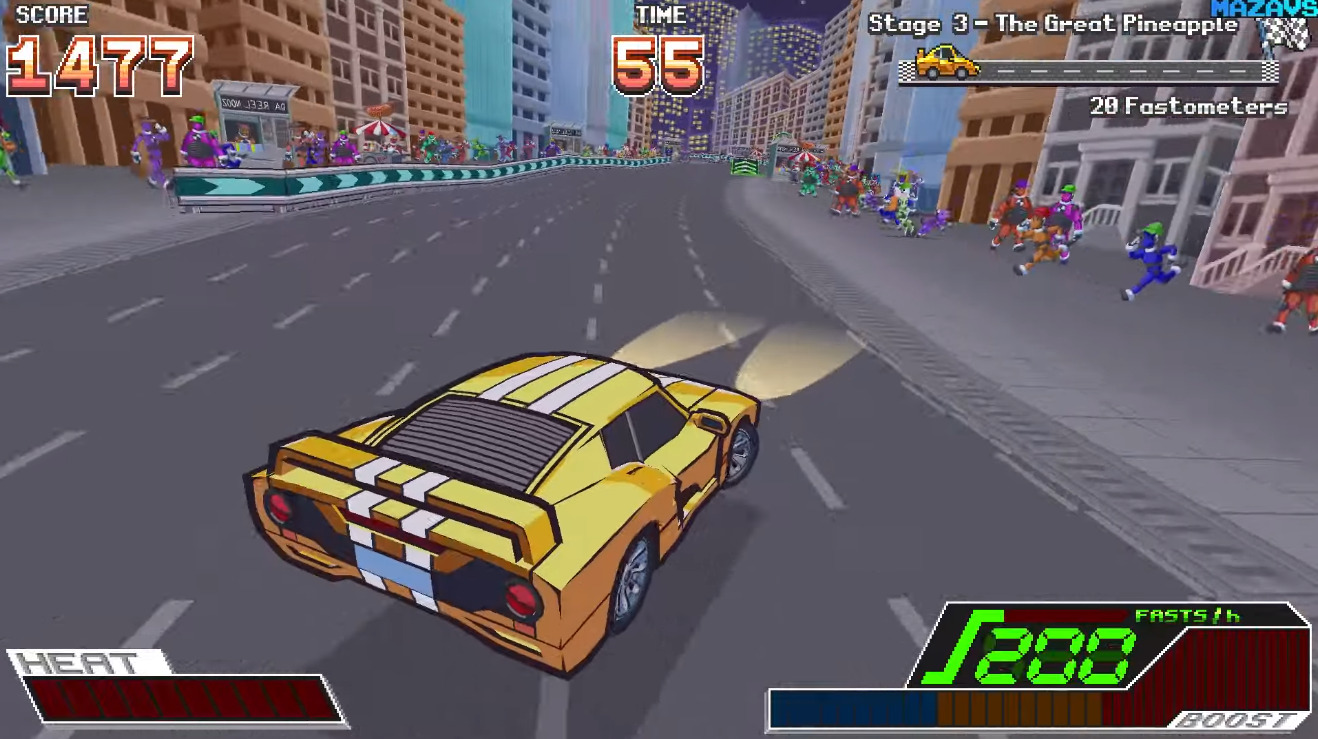 Developed by Fábio Fontes, Buck Up And Drive! features arcade driving gameplay akin to OutRun, but with the added ability for players to flip their car and perform mid-air stunts for more points.

In addition to racing to each new checkpoint in time, players are also tasked with avoiding cars, hitting jumps, grinding atop guard rails, and choosing which areas to go to next via branching paths. 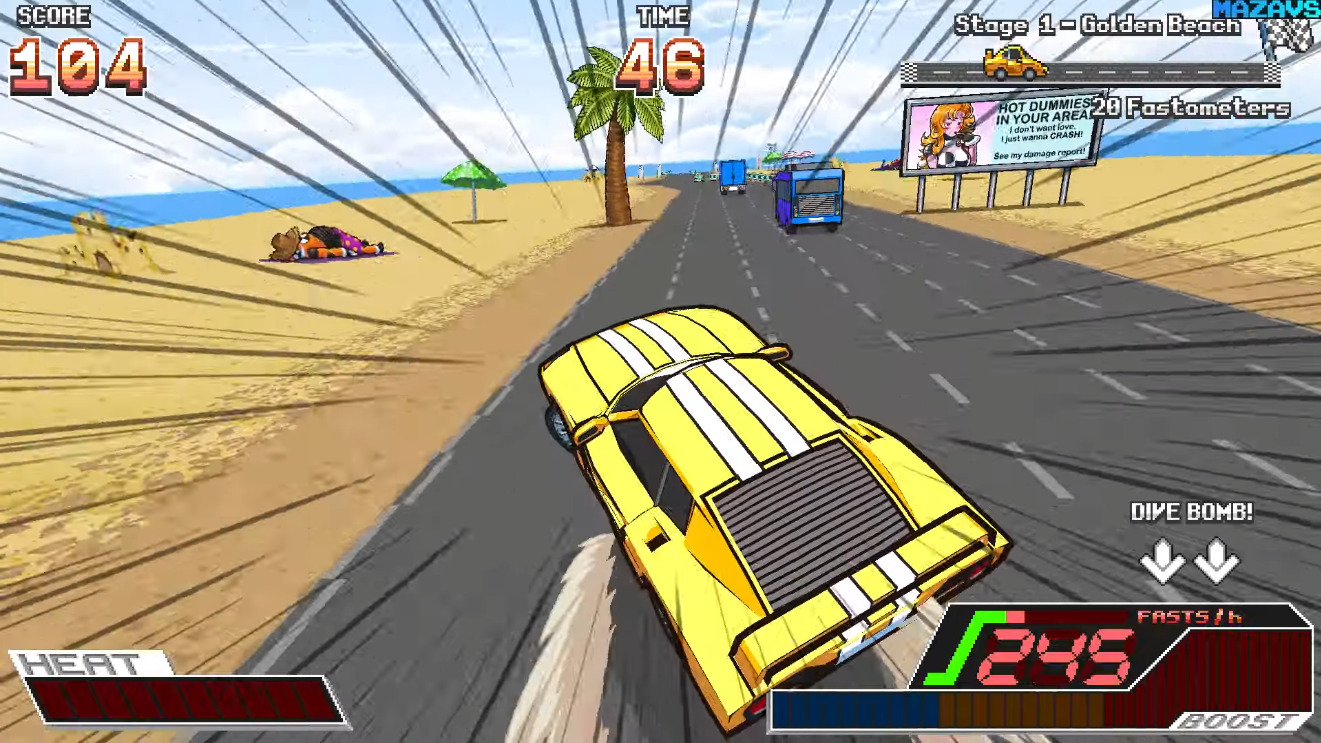 As part of its numerous tracks and settings, Buck Up And Drive! features a number of billboards along its road filled with small jokes and parodies of memes and real world brands, such as a crash test  dummy dating advert – the seeming only inhabitants of this world – in the style of a website pop-up.

Other billboards display messages such as “That is bulls–t blazing” with a picture of a burning cartoon poop in reference to Guilty Gear Stive’s “Smell of the Game” theme, “Hurry Up A—–e!” and “F–k you Baltimore! from the popular Big Bill Hell’s viral video,” and “Eat the rich” with a heart next to it. 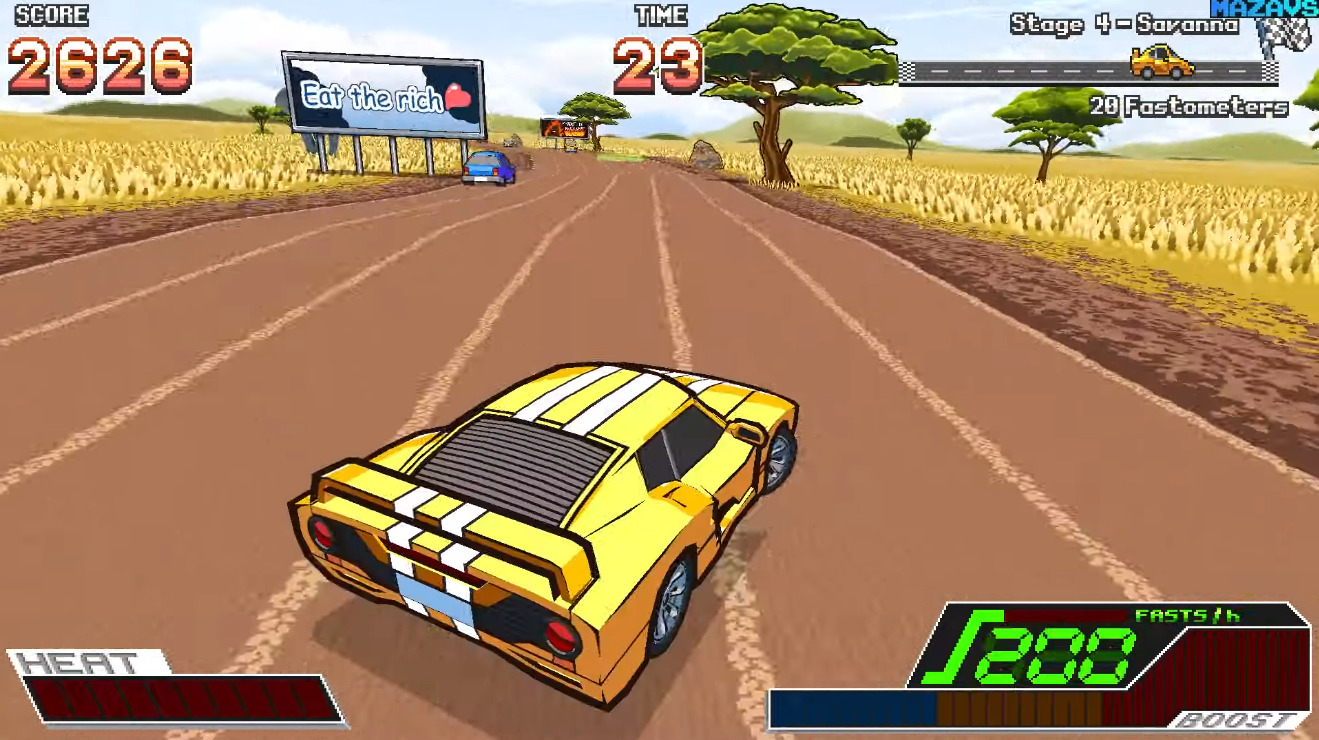 In certain modes where players can ram other cars off the road, captions such as “F–K OFF!” and “GOTTEM!” flash across the bottom of the screen.

However, when ramming a police car – whose occupants try to stop you from reaching the checkpoint if you ram too many cars – the special captions “OINK OINK” and “F–K THE POLICE!” can appear, alongside a blaring warning which displays one of a number of variants on the phrase, “IT’S THE PIGS!” 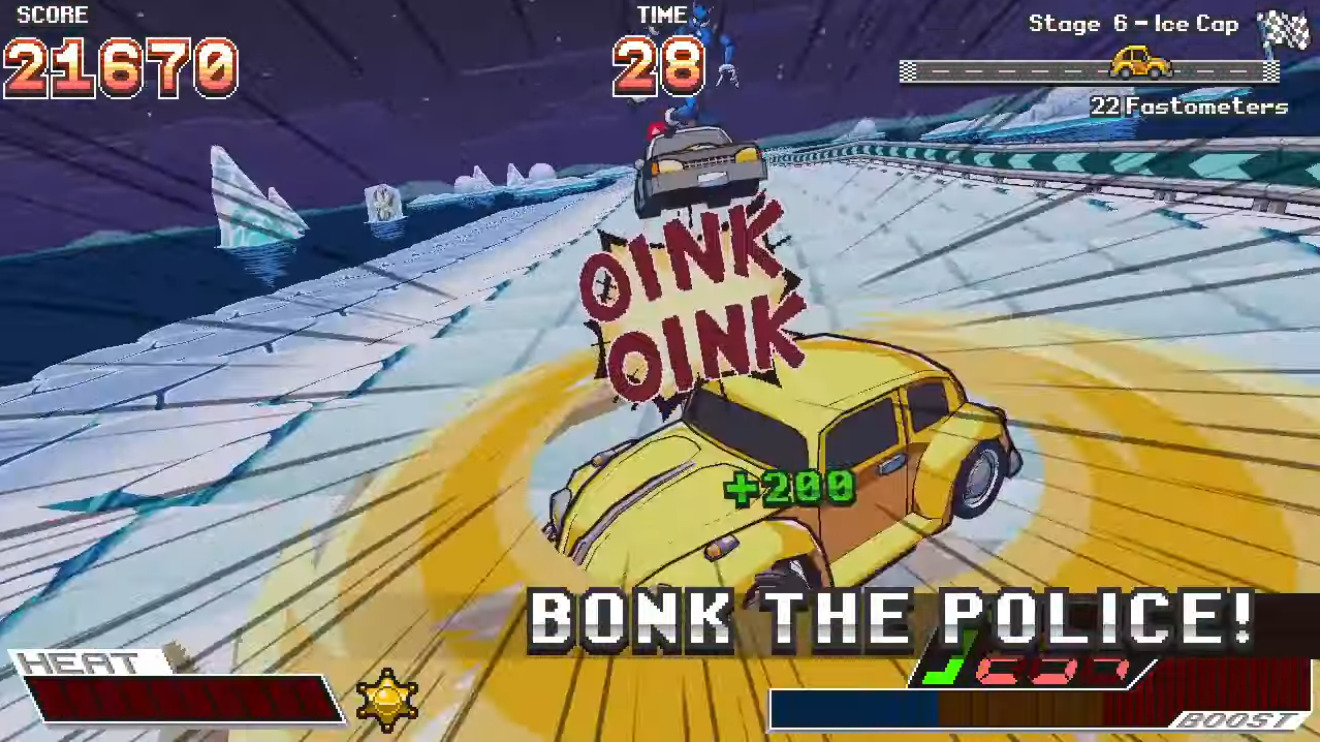 Alongside these jokes and references, the billboards can also display completely textless versions of the gay and transgender pride flags. Gameplay footage shows that in the game includes a “Pride Flag Billboard Toggle” option which allows a player to choose whether or not the game displays these flags – though in reality instead plasters the images across every billboard in the game

The inclusion of these flags angered some players, a number of which subsequently took to the game’s Steam page to voice their objections.

While 92% of the game’s 221 reviews recommend the title, several negative ones object to Fábio Fontes perceived left-leaning political beliefs and accuse the pride flags’ inclusion of being nothing more than virtue signalling. 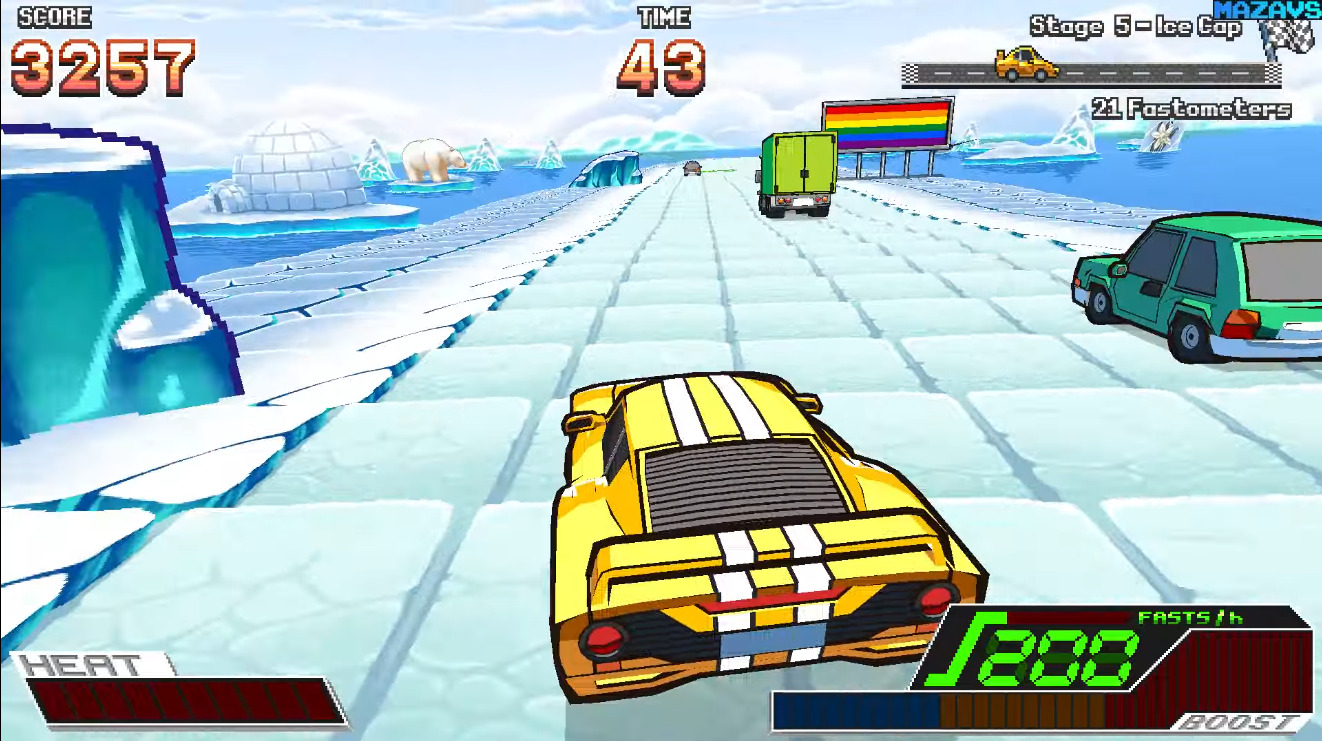 Two of the reviews attacked the flags directly, with user Ruiner asserting that their inclusion designated the game as “OutRun for freaks,” while Heretix solely described them as “Disgusting pride flags.” 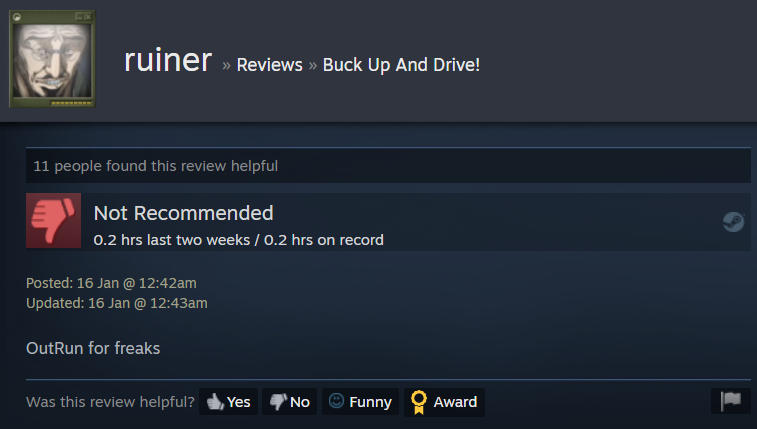 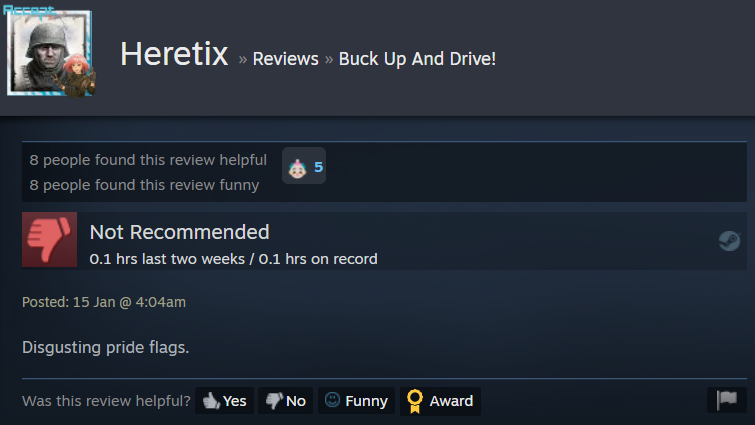 A total of six reviews, [1, 2, 3, 4, 5, 6], four of them feature complaints about the game’s identity politics or virtue signalling – with one noting that it felt like a poor way to get the developer’s message across – and two focused on its functionality issues.

The last one discussed how the game’s community had “attacked” modders who attempted to “fix” the game. – a possible reference to how some players had reacted to the development of mods that removed the pride billboards entirely. 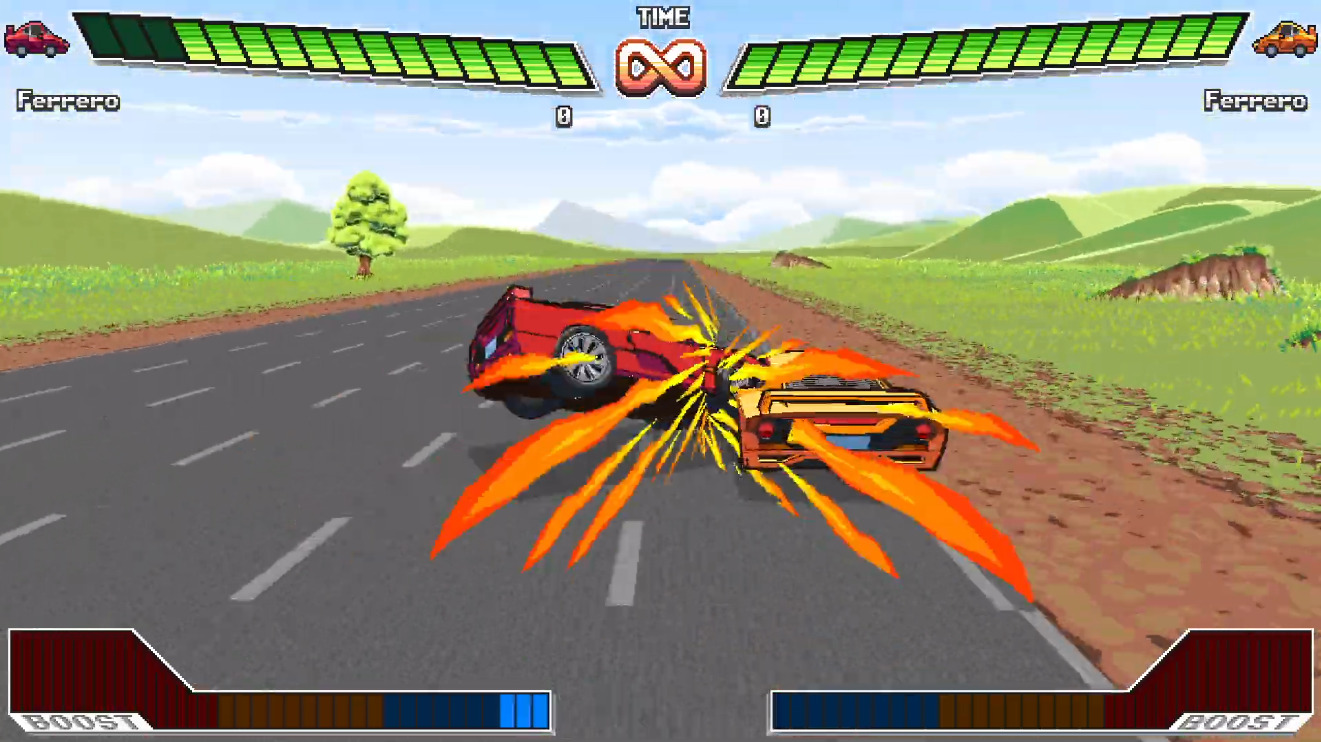 Discussion over the game soon turned virulent [1, 2], with some asking users to not give any Steam Community awards to the relevant reviews – even a mocking Jester icon- as these accolades give the poster credit for use in the Steam Points Shop.

In particular, a number of users were annoyed to find that the aforementioned Pride Flag Billboard Toggle did the opposite of what they expected, changing all billboards in the game to pride flags upon being enabled. 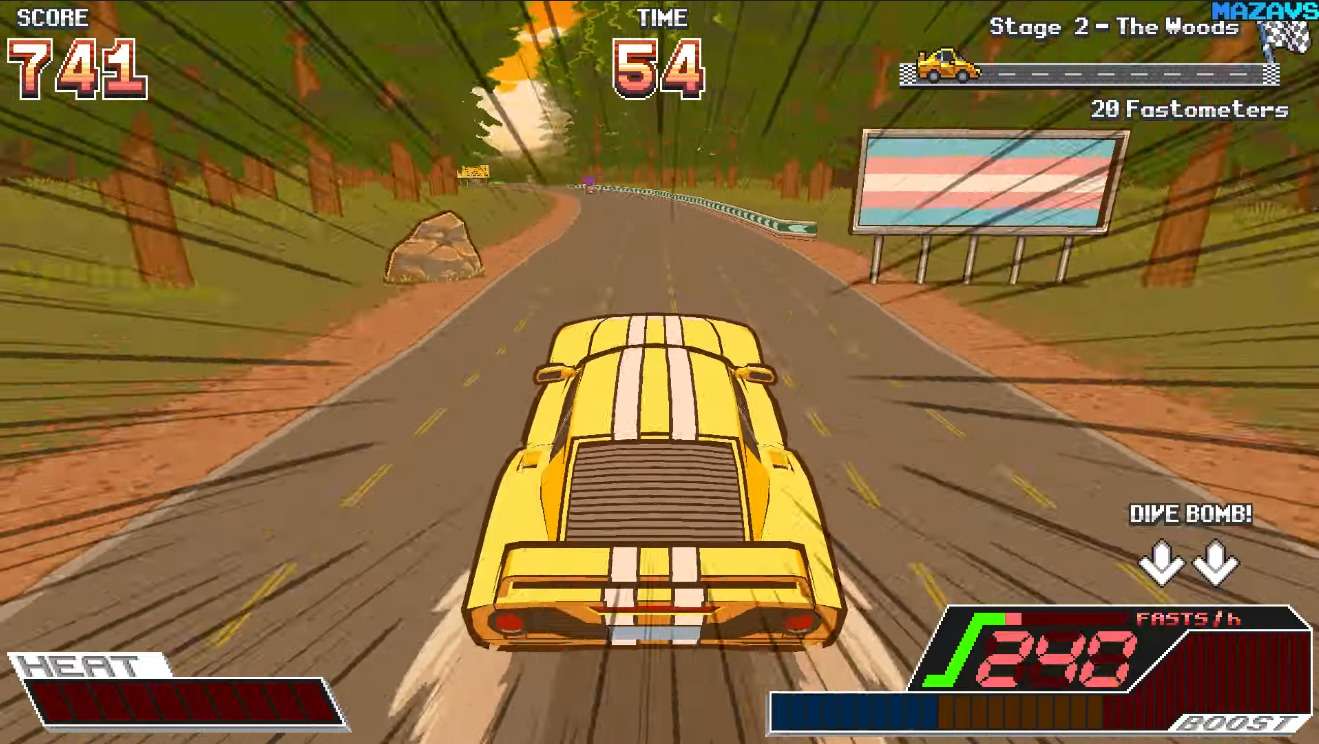 However, while said users described the toggle as being ‘broken’, according to Fontes, it works exactly as intended.

Speaking to Gayming Magazine in the aftermath of the backlash, Fontes explained, “The game features a couple pride flags (rainbow and trans) among the randomized billboards on the sides of the road. Predicting how some folk would react to their mere existence, I figured… screw it, might as well have some fun with it.”

“Hence the toggle called ‘Pride flag billboard toggle’ in the game settings, which can switch between having the pride flags among all the other billboard designs… or turn ALL of the billboards into pride flags,” he continued.

Fontes also noted that he expected the negative reactions to his trolling, adding “Some people foaming at the mouth slightly more than they would’ve already, just for having the flags in the first place (some not getting it and thinking the toggle just doesn’t do anything), and a collective belly laugh from everyone else.”

Ultimately, Fontes was asked by Gayming Magazine for his thoughts on what the outlet described as “these salty, homophobic reviewers,” to which he replied, “My thoughts on the ones upset by it… Cope.” 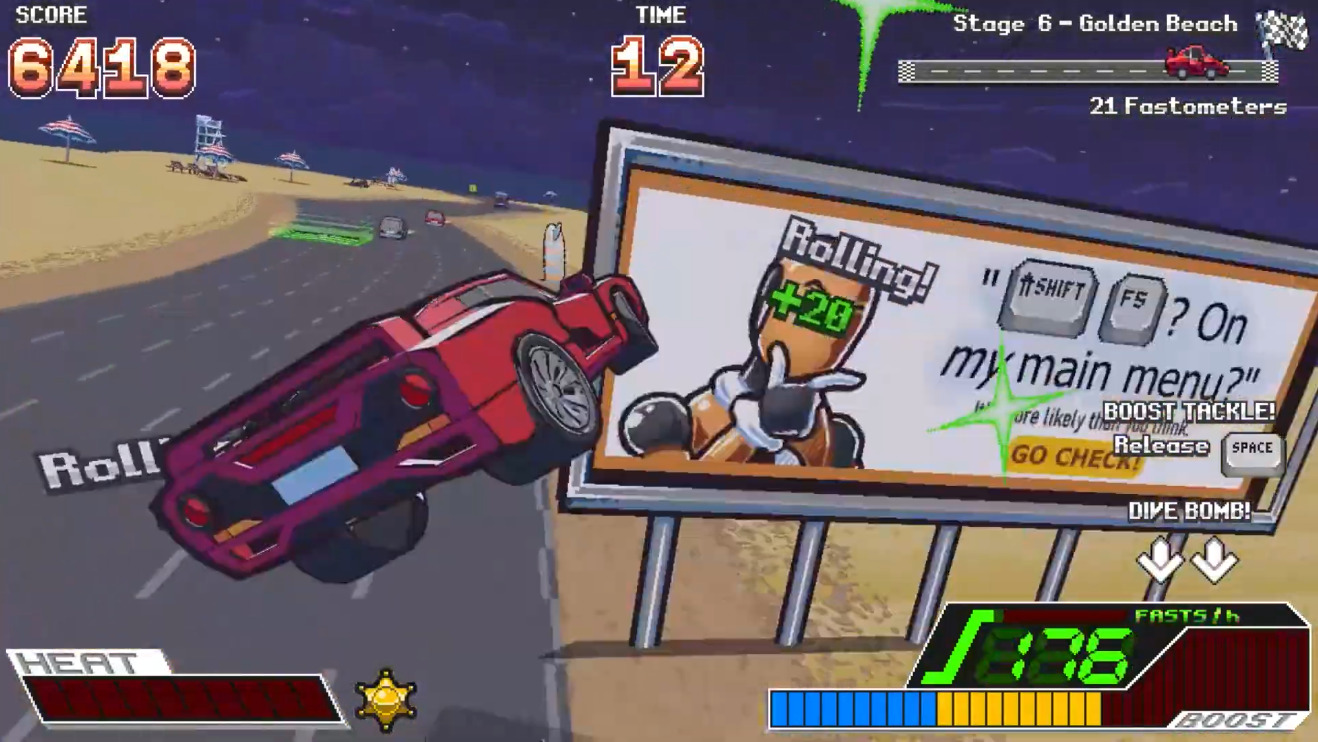 Source: Going on a Test Drive | Buck Up And DRIVE!, Basidel, YouTube

Buck Up And Drive! is currently available on both Steam and Itch.io.

What do you make of the backlash to Buck Up And Drive’s inclusion of pride flags? Let us know your thoughts on social media orin the comments down below!

NEXT: G4 Host Indiana Black Claims Viewers Are Unconsciously Biased Against Her Because She Is“ Not As Bangable As The Previous Hosts”