Rob Schneider recently received some backlash from social justice warriors after he questioned the American government’s treatment of individuals who exercise their First Amendment freedoms. 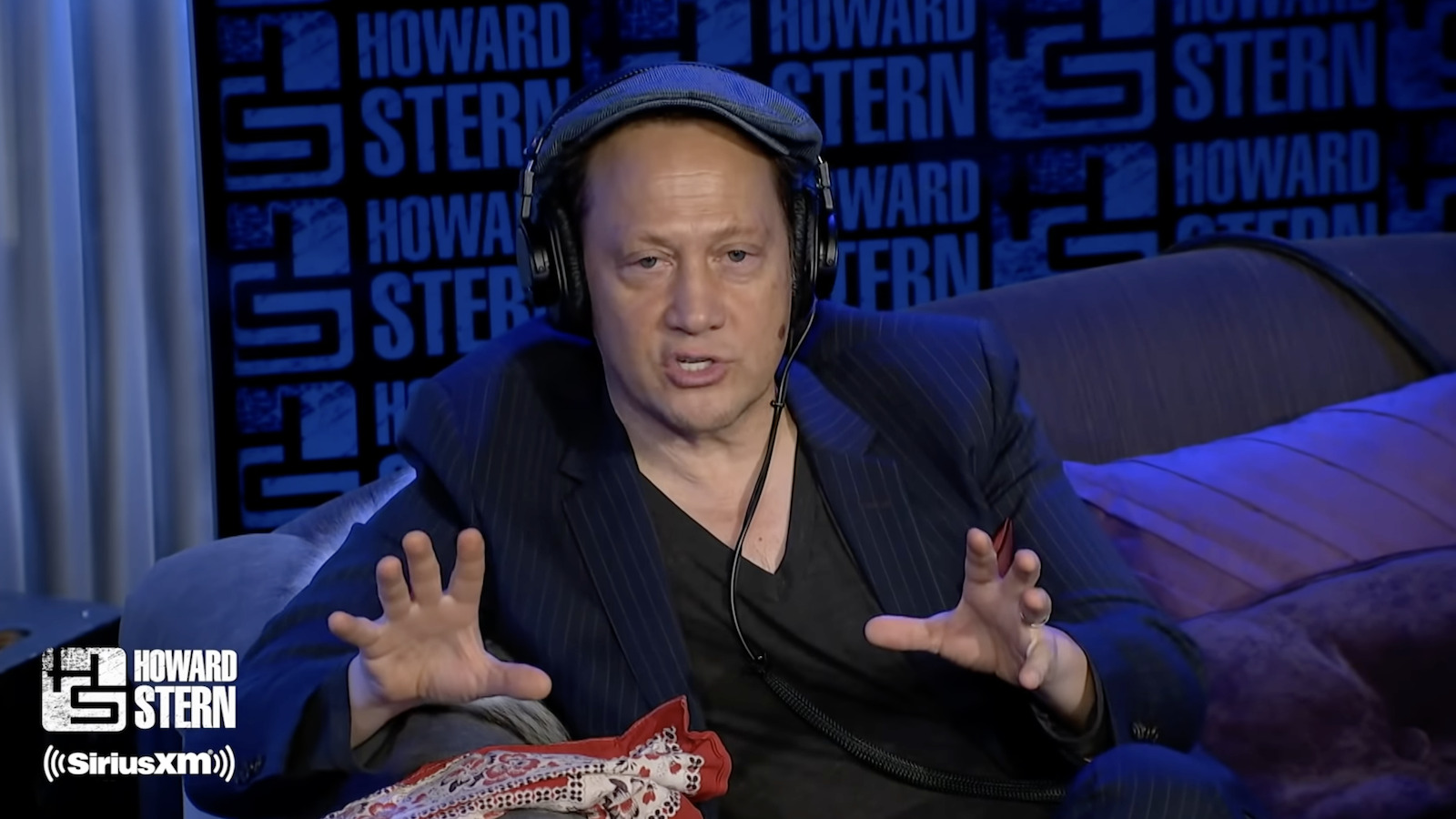 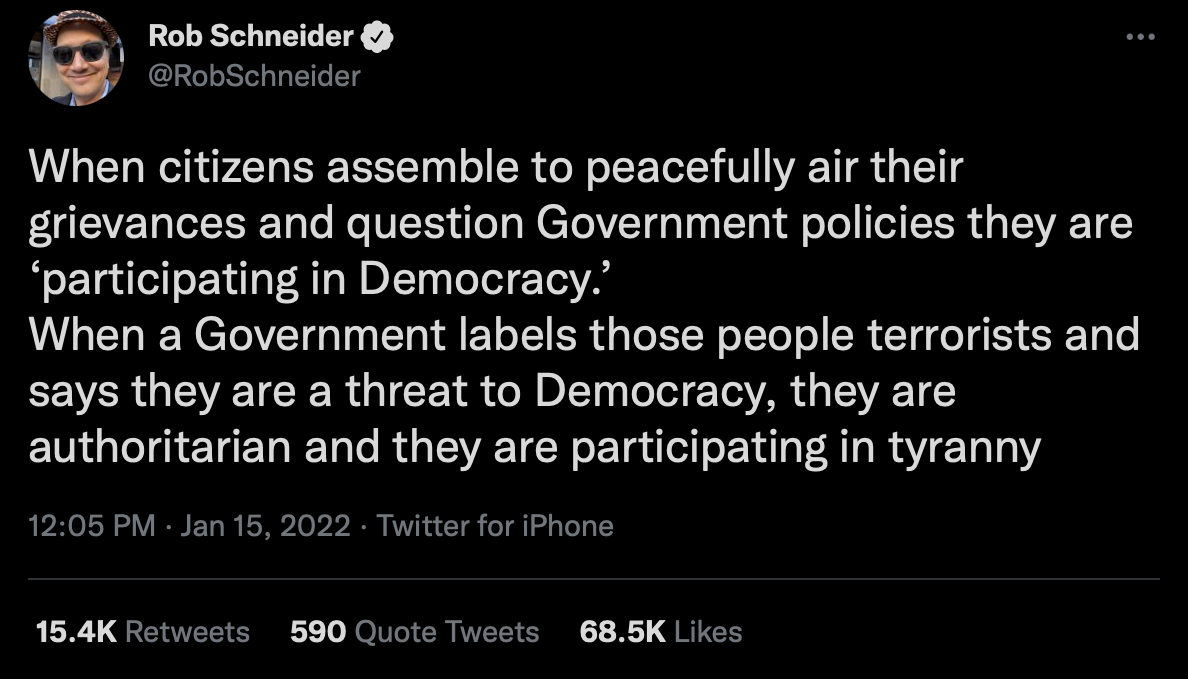 Left-wing Twitter users were quick to assume Schneider’s tweet was alluding to the events that took place on Capitol Hill on January 6th, 2021.

“Tell us how yelling ‘Stop The Steal’ and smashing windows and assaulting police and threatening representatives = ‘assembl[ing]e to peacefully air their grievances and question Government policies,'” wrote another user. 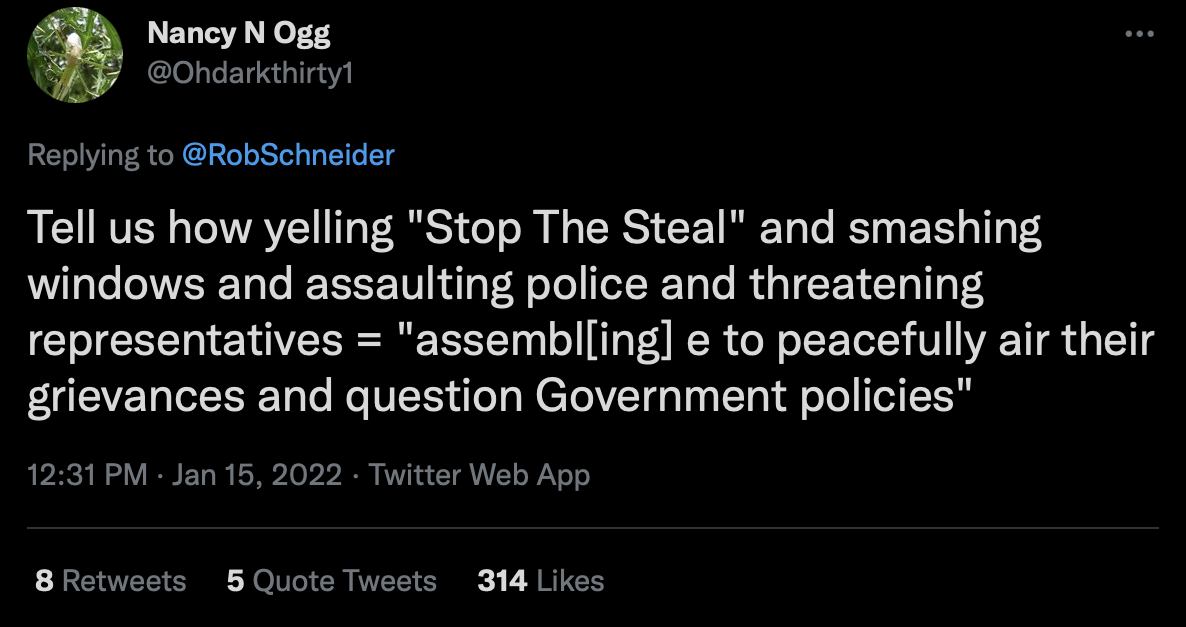 @BossHook accused Schneider of not “paying attention in school when they talked about reading comprehension and critical thinking,” declaring that if the comedian thinks “1/6 was peaceful, you might have several learning disabilities you need to address.” 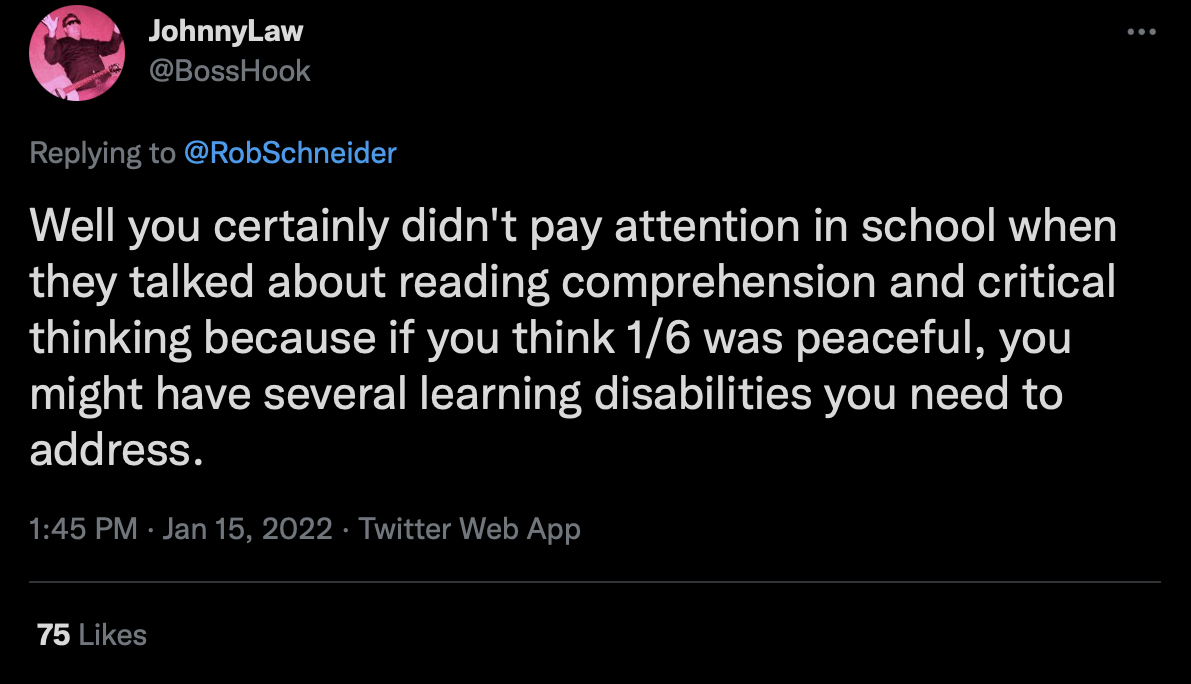 “When it comes to climbing barricades, smashing windows, beating law enforcement, damaging federal property, invading federal property it is no longer peaceful (same with riots)” said @DrPaperwasp. “They had ‘the right’ for the rally, yes but not the right to delay proceedings and invade the building.” 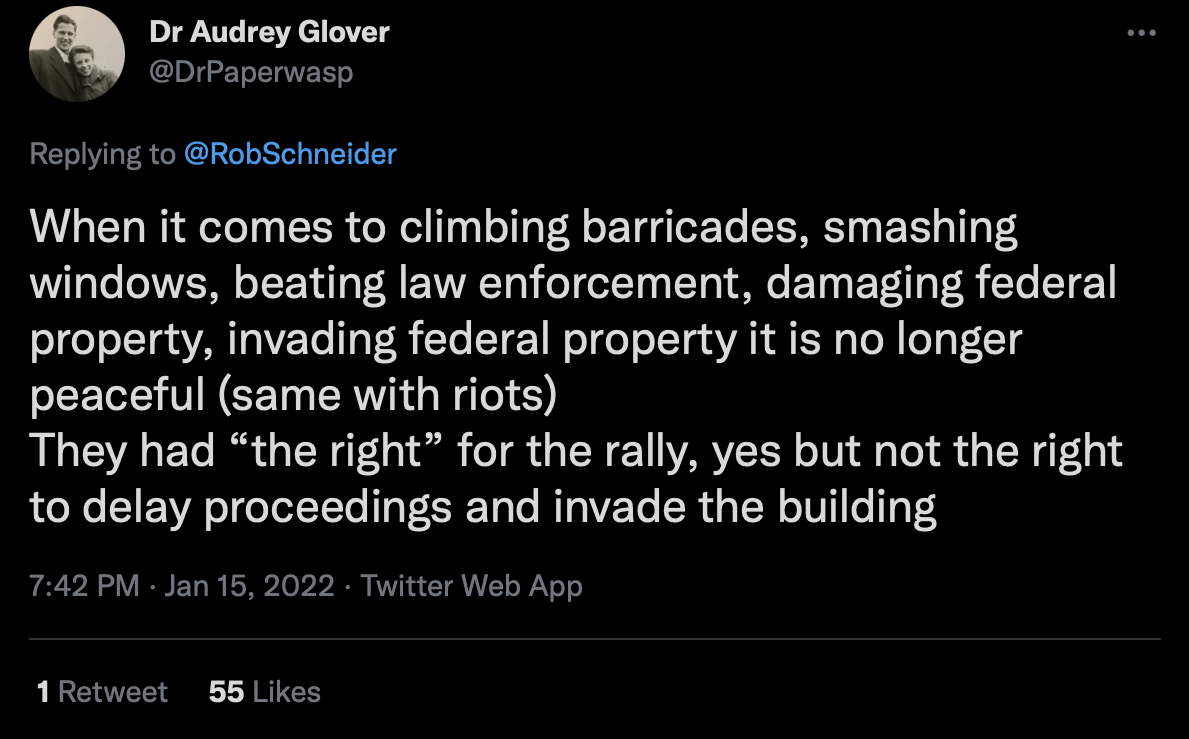 “What about when some then get ‘carried away’ and attack innocent police officers and destroy property and break into a federal building, and try to have things ‘their way’ or people die?” questioned @DC_Mas8n. “When members of Government protect those people, who is participating in tyranny?” 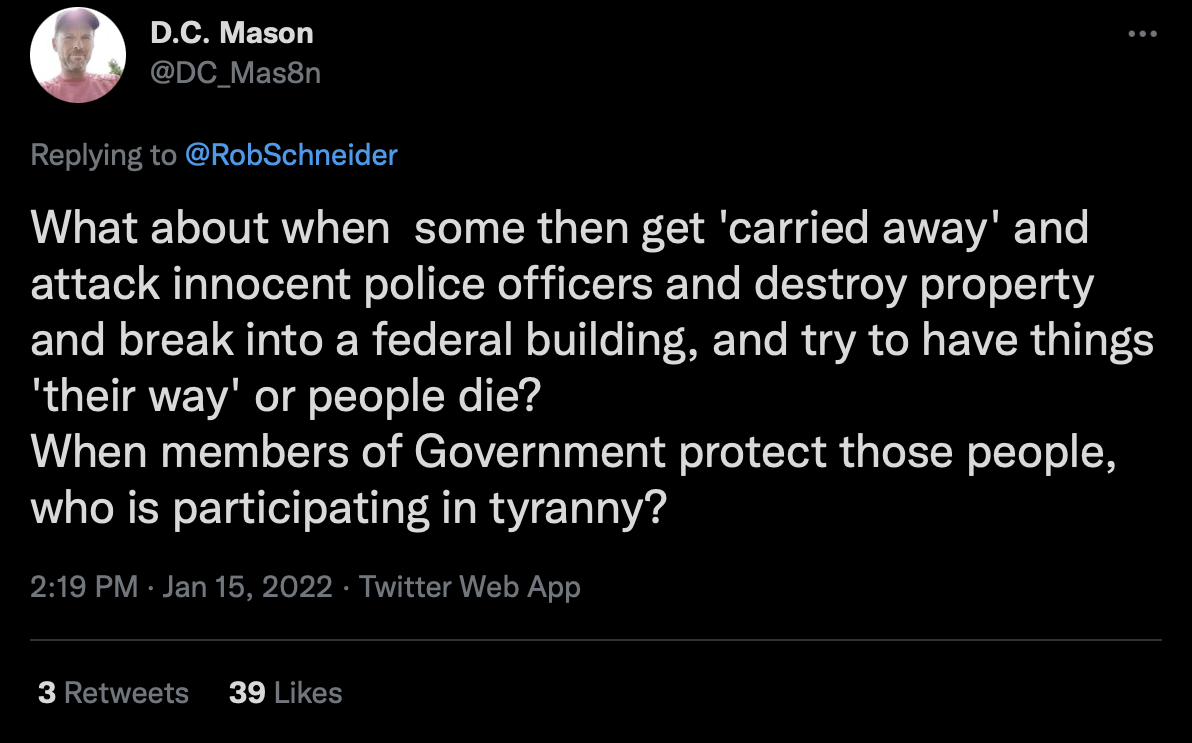 @LambertNolen took issue with Schneider’s diction, asserting, “You may want to take another gander at ‘peacefully.'”

Voice actor John DiMaggio, whose popular roles in clude Bender in Futurama and The Scotsman in Samurai Jack, simply commented, “Not really, but ok, dude,” alongside “You can do it!” gif of Schneider’s small yet iconic role in Adam Sandler’s The Waterboy. 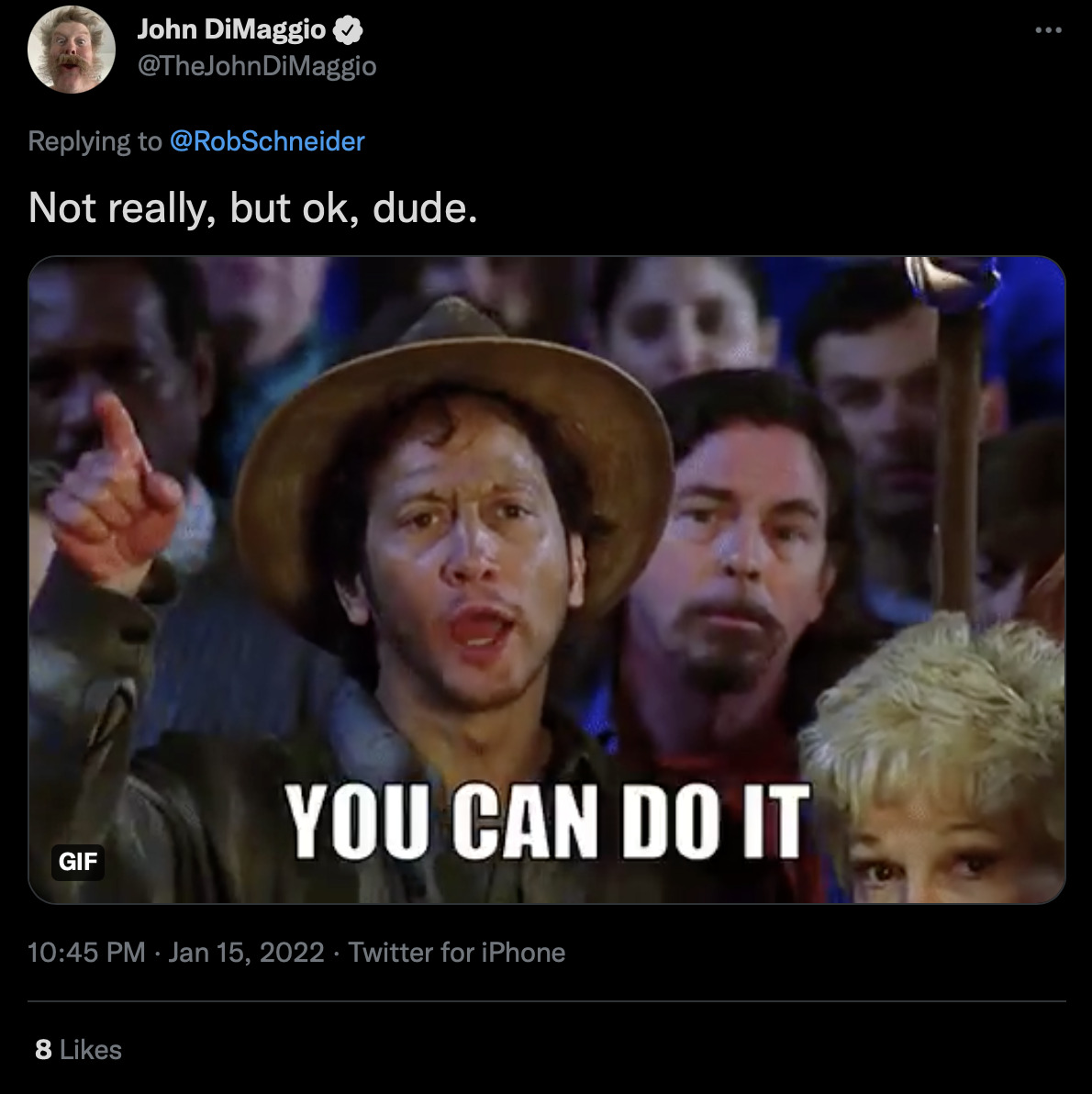 In contrast, Twitter user @jbarker196 called out the disgruntled users who immediately assumed Schneider was alluding to January 6th, asking, “Why are so many jumping to the conclusion that he’s talking about Jan 6??? This is a general statement.”

“Hear, hear. The more of your tweets I see, the more I like ya,” wrote another user who showed support for the actor-comedian’s tweet. “I admit to not having a favorable view to the majority in Hollywood. Become a habit I’m afraid.”

@RShmoover called out the hypocrisy of those who keep claiming the January 6th Capitol Hill events was an attack on democracy, sharing a handful of images taken from the various Black Lives Matter riots that broke out in the wake of George Floyd’s May 2020 death.

“There’s a third prong to this,” he noted. “That same govt labels this as mostly peaceful and encouraged it”. 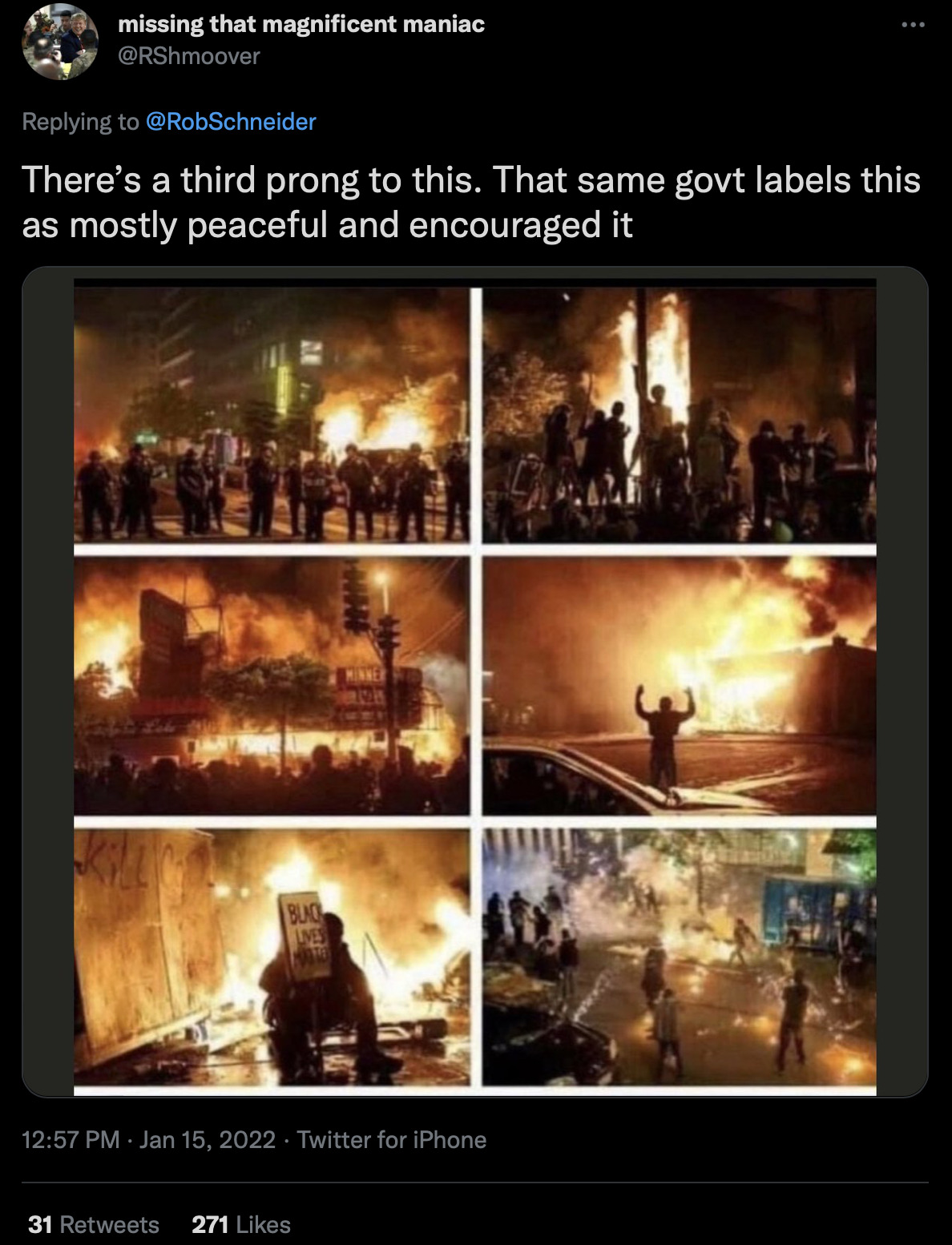 Noticing that his original comment was being widely misinterpreted, Schneider followed-up two days later with an explanation of exactly what he meant.

“For people who are conflating my comments for their own political echo chamber, I will clarify for people who can’t seem to understand what I meant by ‘When citizens assemble to PEACEFULLY air their grievances,’ it means PEACEFULLY!” the comedian told the public. “As in NO destruction of private or public property, NO trespassing on private or public (Government) property, NO arson, NO violence towards ANY persons (Police or private citizens), no weapons of ANY kind.”

“My (self-evident) statement speaks to Justice Dept and Military Joint Chiefs targeting parents who attend school board meetings and citizens who are and will continue to exercise their FREEDOMS like their right to assemble and express their grievances against Gov policy,” he concluded. 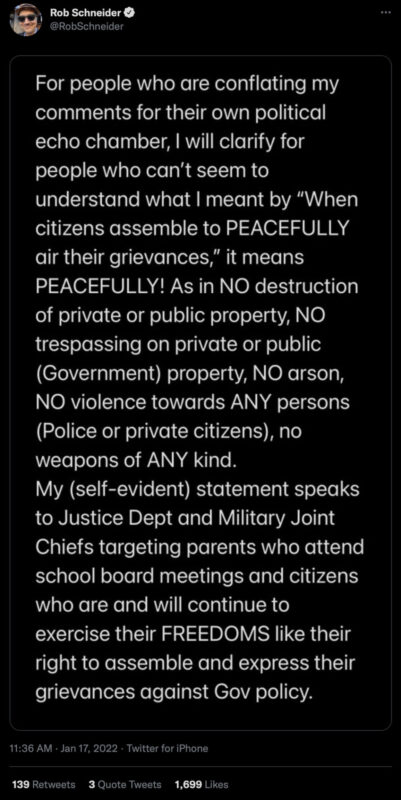 Schneider then pointed out the FBI’s hypocrisy in how they track parents who allegedly sent threats to school boards and teachers but turn blind eye to real acts of domestic terror.

“FBI, ‘We believe the Jewish Synagogue hostage siege was not an act of domestic Terror and should not be compared to actual acts of domestic Terror like when Parents show up at their School Board meetings and ask uncomfortable questions,'” wrote the actor. 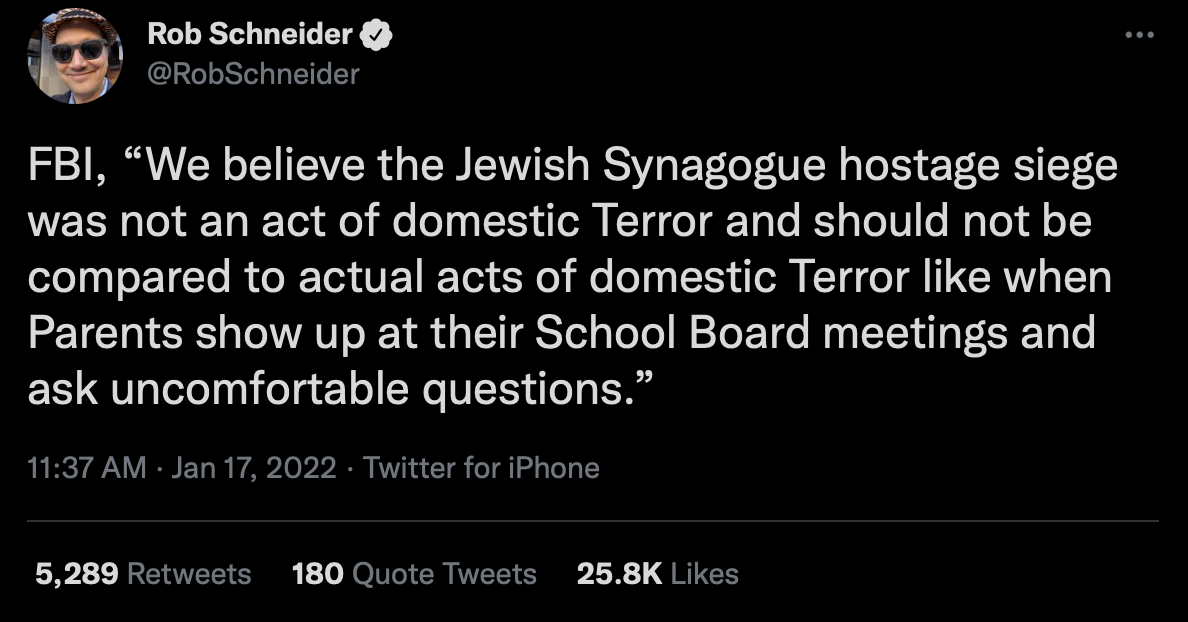 The “Jewish Synagogue hostage siege” referred to by Schneider occurred this past Saturday in Texas and saw an armed Islamic terrorist take hostages at a synagogue in Dallas, Texas. At the time the FBI claimed that the terrorist attack was not “specifically related to the Jewish community.”

The comedian is also referencing a report from November of last year which was revealed that the FBI had created a “threat tag” to apply to parents who allegedly leveled threats, harassment, and violence against school administrators, teachers, and board members.

At the time, The New York Times reported that some Republicans in Congress “have suggested that the participation of the F.B.I.’s counterterrorism division in the effort indicates that the administration is equating parents with terrorists.” 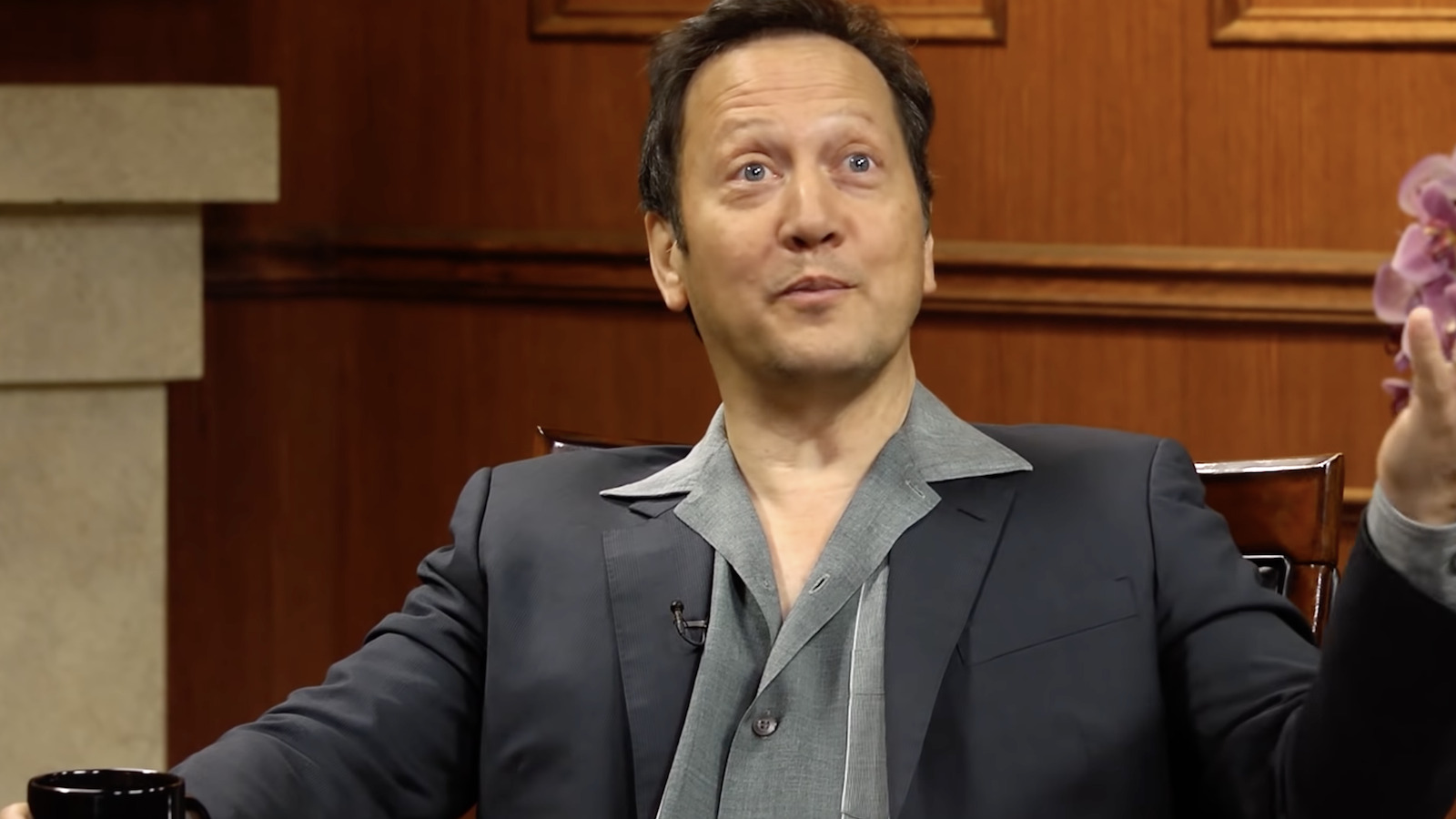 This is far from the first time Schneider has been critical of the U.S. government.

Last year, the comedian criticised the Biden administration’s draconian door-to-door COVID-19 vaccination effort, suggesting that such measures are the reason why the 2nd Amendment was added to the Bill of Rights.

“Just say no… And keep saying no… Over Half of the US population is continuing to say no to this unapproved experimental gene therapy!” wrote Schneider at the time, throwing a jab at the ‘My body, my choice!’ feminist slogan,” and adding the #2ndAmendmentIsForThis hashtag.” 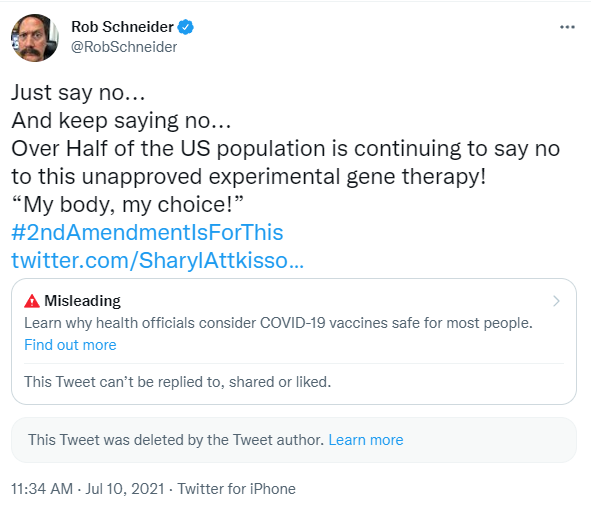 In response to a user who questioned the actor’s assessment, Schneider declared, “Our Government has told us they plan on going to OUR FRONT DOOR with this. They have lied, had a 2 year fear campaign and lockdown, destroyed middle class household incomes, bankrupted untold thousands of businesses and are now putting children’s lives at risk.” 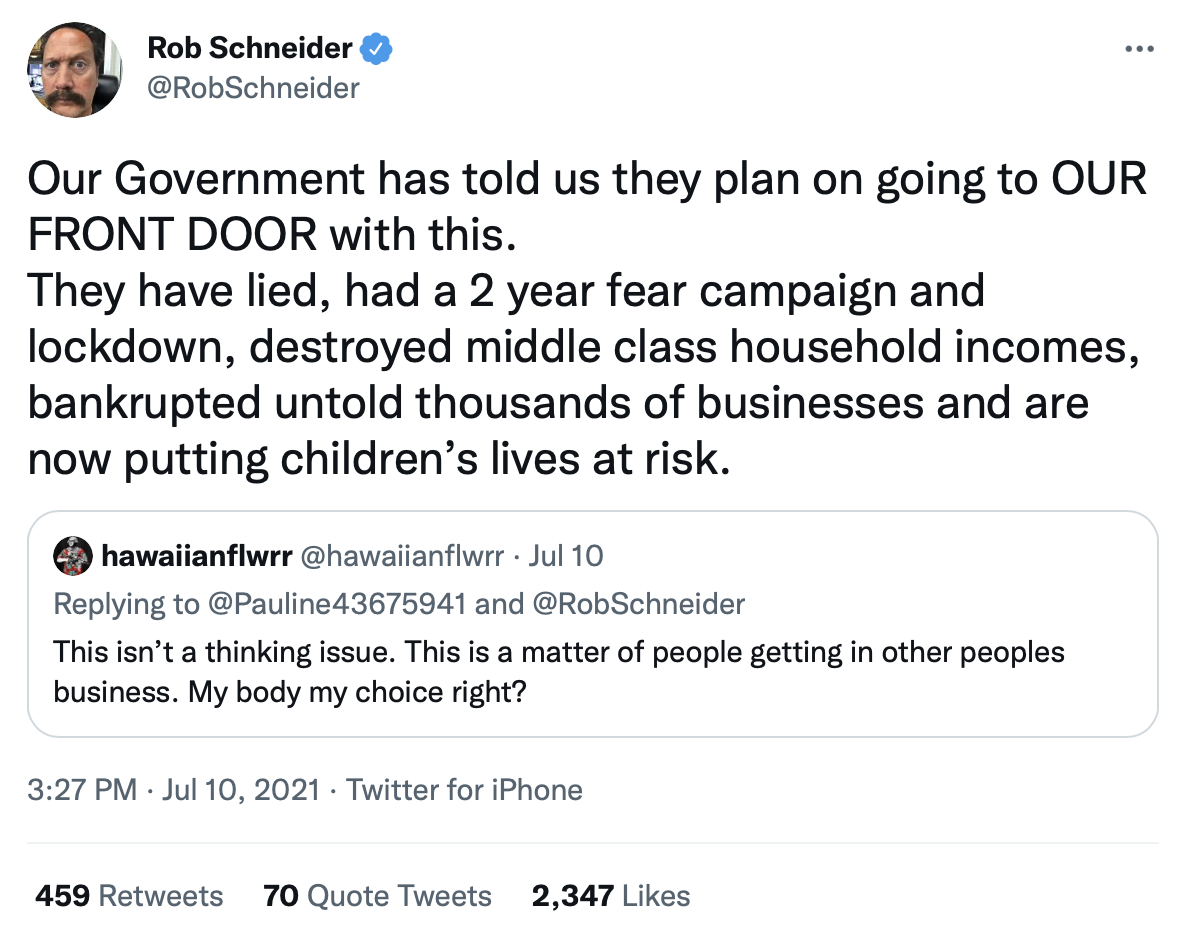 In a more recent tweet, Schneider once again affirmed his commitment to the exercise of free speech, sharing a quote from writer and comedian Andrew Doyle’s book ‘Free Speech And Why It Matters’ which discusses how “free speech is the marrow of democracy.”

“Without it, no other liberties exist,” Doyle’s writing continues. “It is detested by tyrants because it empowers their captive subjects. It is mistrusted by puritans because it is the wellspring of subversion. Unless we are able to speak our minds we cannot innovate, or even begin to make sense of the world.” 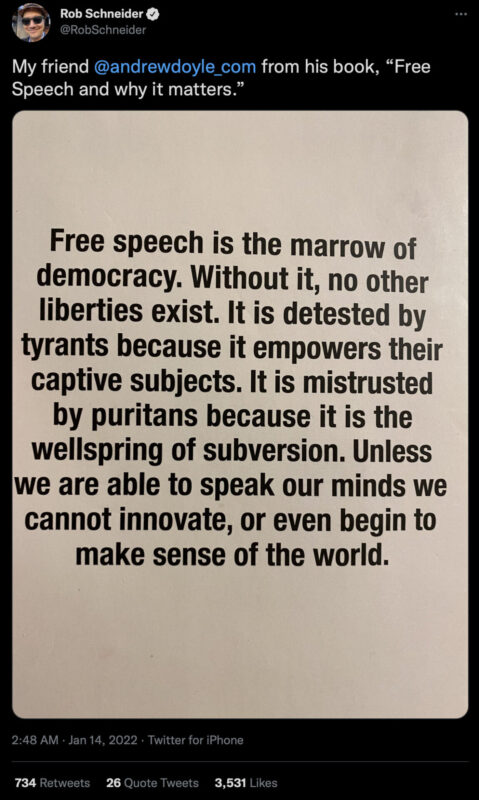 What do you make of Schneider’s recent comments on the First Amendment? Let us know your thoughts in the comments section down below or on social media.