Bill Maher recently faced some social media backlash for expressing his opinion on the country’s COVID-19 face mask policies, claiming that he “doesn’t want to live on your masked, paranoid world anymore.”

Interestingly, the backlash the comedian and political commentator has received came from his very own woke, liberal, and progressive audience, who don’t agree with Maher’s current views regarding the ongoing usage of facial masks.

“It’s wonderful to see your beautiful masks again. Still with this s—t,” said Maher as he began the show. The comedian then addressed his recent birthday, saying, “I don’t see myself as getting older. I see myself as becoming a milder variant.” 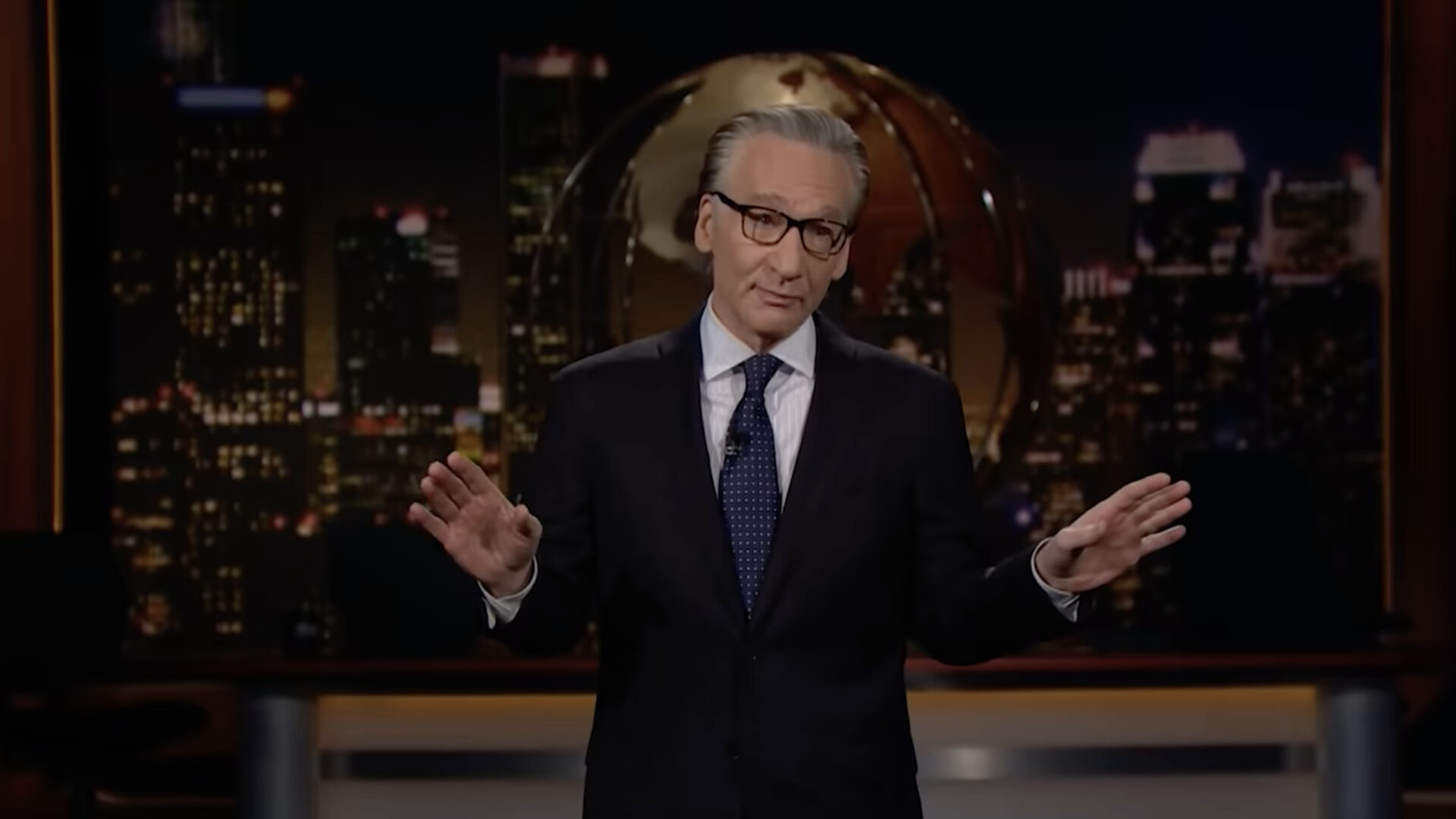 Bill Maher then went on to joke about the COVID-19’s new Omicron variant, stating how mild and apparently asymptomatic it is amongst carriers.

“We didn’t have Omicron when we were here a couple of months ago. That’s the new one, and that one’s very…milder, much milder. We should be celebrating this, but of course it’s very easy catch. It’s like the Candyman; you have to say its name five times and you can get this s—t. ”

After making a sexual joke about Omicron’s viral load, Maher continued, “So anyway, hopefully we’re getting out of this s—t soon. I mean, I can’t take it much more,” further adding “It’s just gone on too long. Nobody cares anymore. … I don’t want to live in your paranoid world anymore, your masked, paranoid world.” 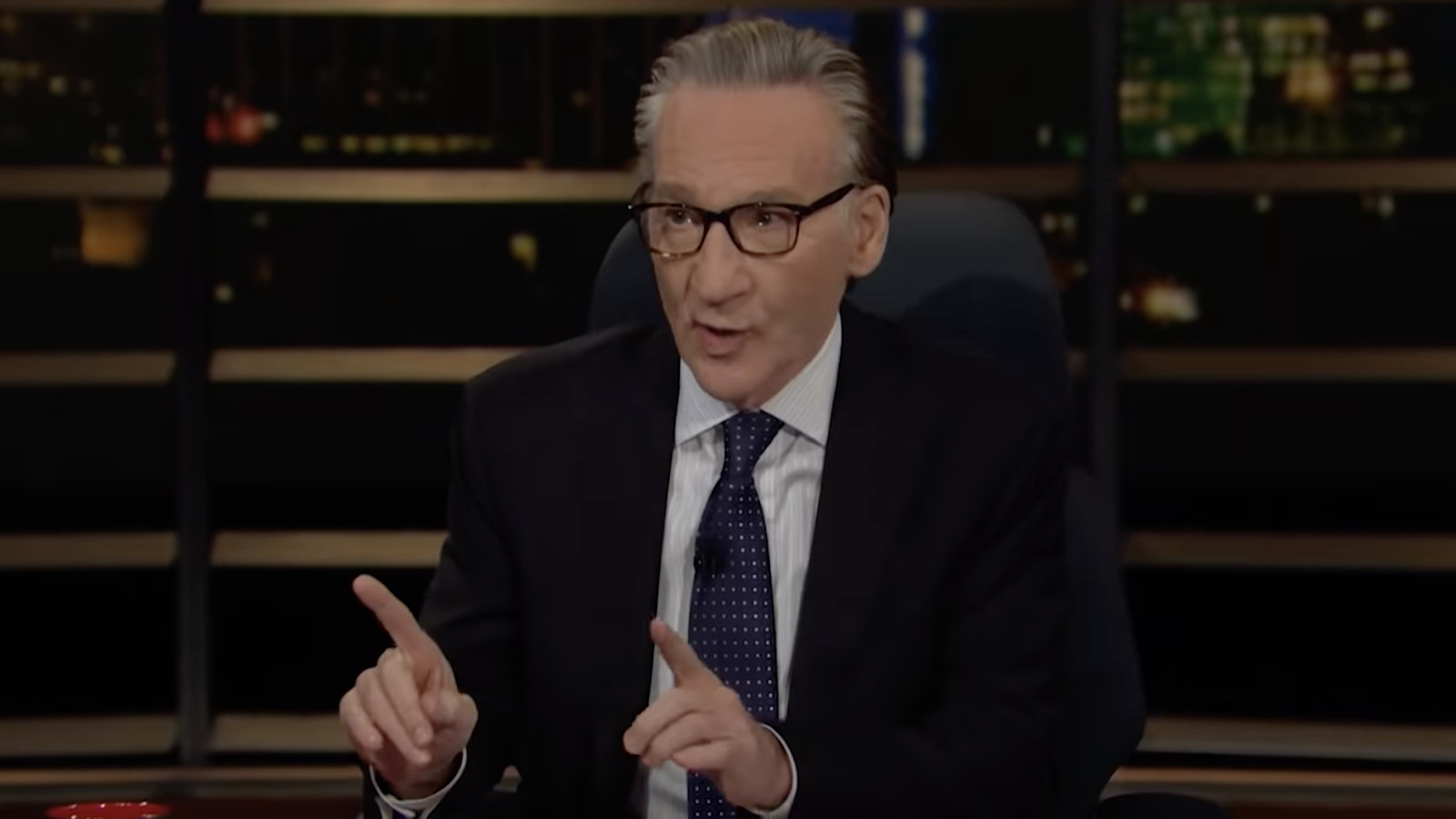 Maher doubled down on his stance later on the show, pointing out that COVID-19 vaccines do not stop people from catching the virus and explaining how this particular fact is a counterargument to the notion that “we need the vaccine to protect other people.”

“What’s so different from where we were two months ago the last time I sat here is that we now know the vaccine does not stop you from getting it,” said the comedian, adding, “I found that out when I got it.” 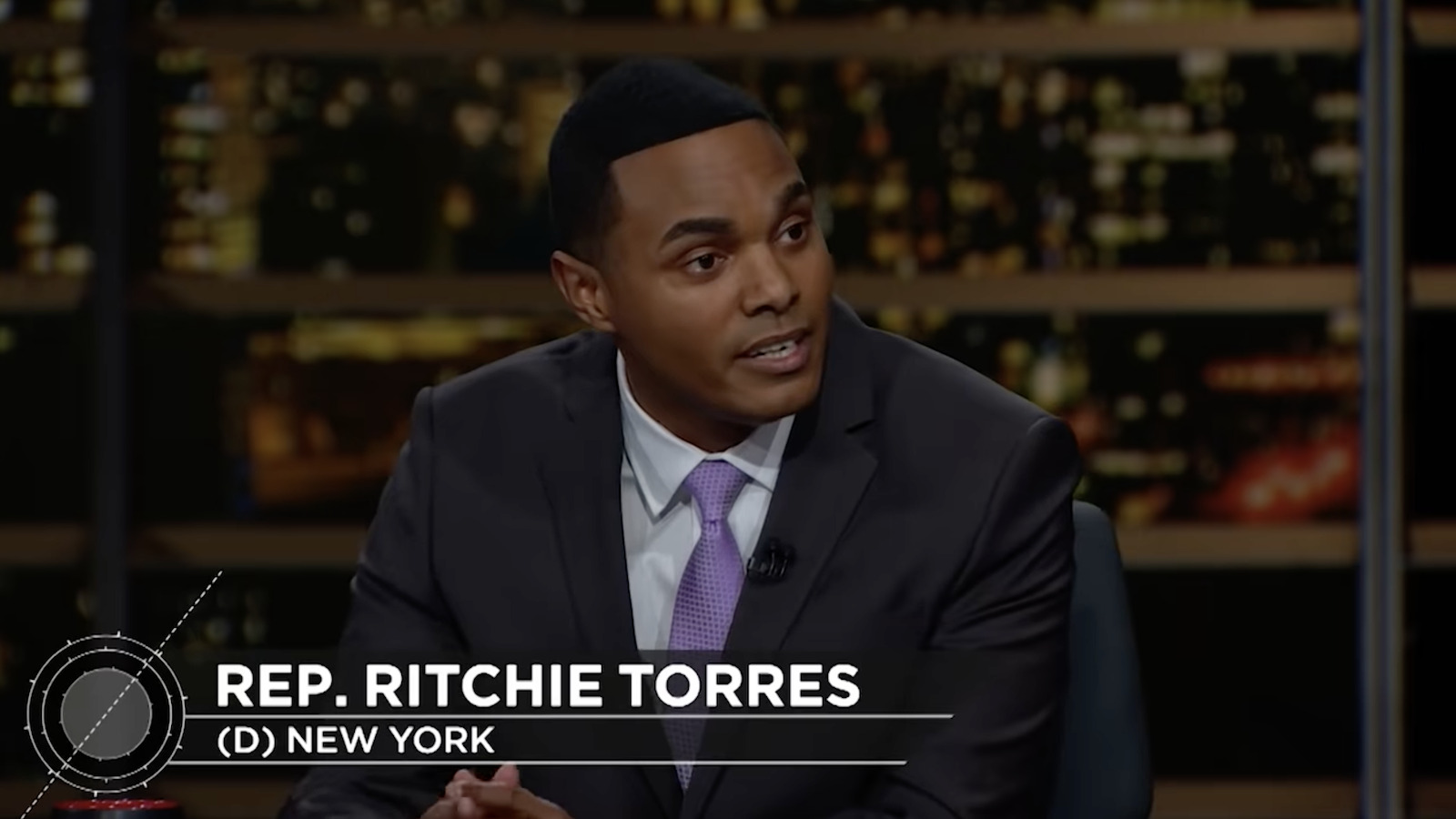 Bill Maher also found himself in disagreement with Ritchie Torres, Democrat representative for New York’s 15th district, who firmly believes that “the response to COVID has been worse than the disease itself.”

“I was a New Yorker who lived through the early weeks and early months of the pandemic and it was just a catastrophe for New York City the likes of which we’ve never seen,” said Torres bringing up that the city of New York lost “more than sixty thousand people.”

The New York representative continued, “The Bronx alone lost more than seven thousand people, which is larger than the combined death toll of Pearl Harbor and 9/11,” recalling to have seen “mass graves in Hart Island.” 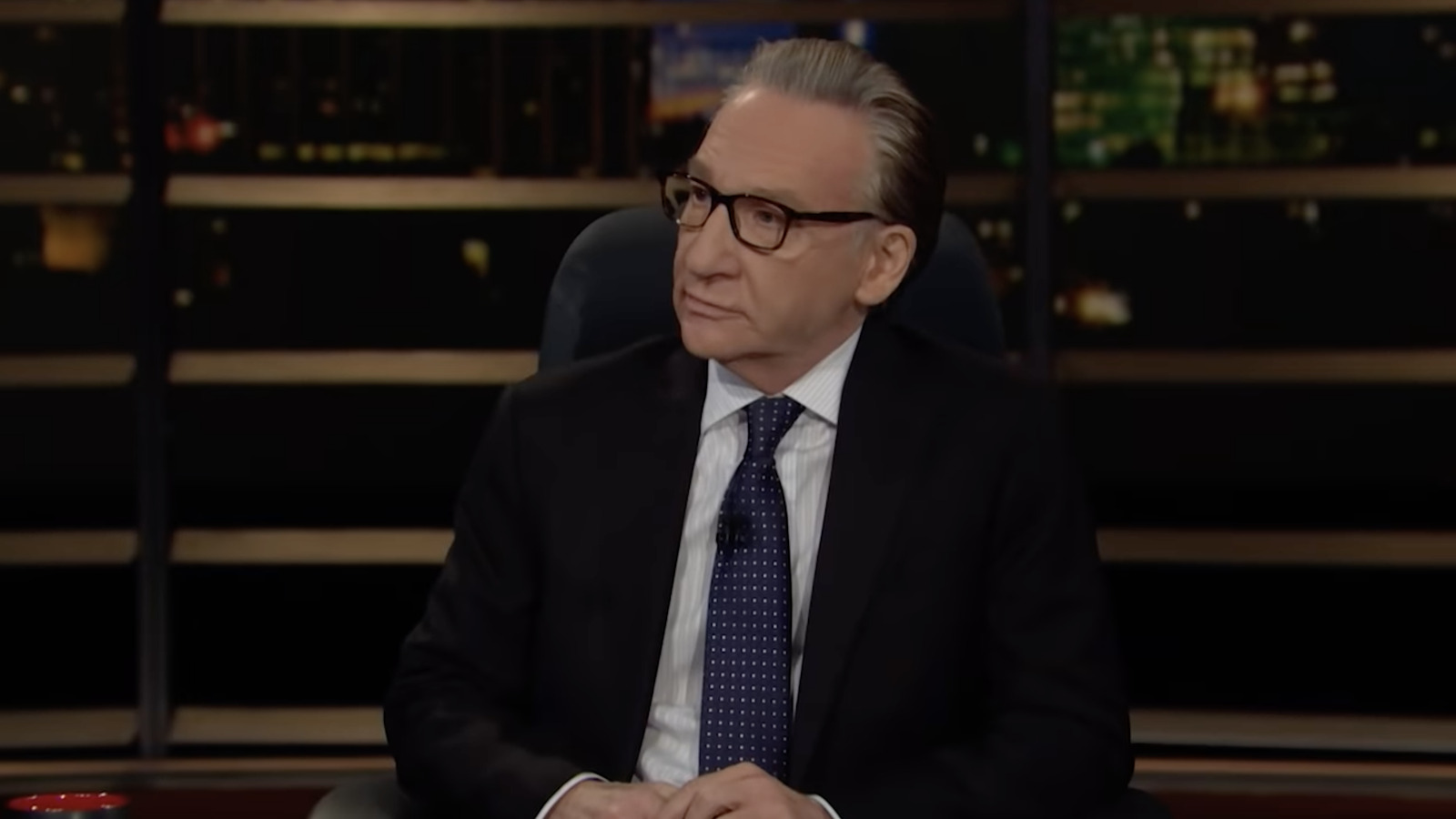 Well, I would argue with that, responded Maher, stating that he “asked for the COVID deaths by state,” and proceeding to explain that “the worst is Mississippi” while his home state, New Jersey, was in fourth place regarding COVID deaths per thousand people.

“What this is saying is Florida stayed open. I was just in Florida. I’ve been there a few times since this started [and] the atmosphere is just different,” the commentator explained. “I’m not moving to Florida. I’m not promoting Florida.”

AOC was spotted partying in a bar maskless in the great free state of Florida. Absolute hypocrite pic.twitter.com/5lPEtPTnib

RELATED: Nicki Minaj Snaps At Journalist For Harassing Her Family In Trinidad Over COVID-19 Vaccine Comments: “B—h Your Days Are F—ing Numbered”

Maher then took a jab at Democratic representative for New York’s 14th district, Alexandria Ocasio-Cortez, who was recently seen partying maskless in  Miami, Florida whilst her home state was undergoing a surge in COVID-19 cases.

“I’m just saying, [Alexandria Ocasio-Cortez] just went to Florida and had a good time without a mask,” Maher joked to an audience that was perceivably annoyed by his comment against the hypocrite Democratic representative.

He went on, “I’ve been to Florida. The atmosphere is just night and day from California, which was gloomy, everything was…the Andromeda strain was out there. I’m just saying, yes there were different factors, but basically it’s like they stayed open and went on with life and didn’t do a hell of a lot worse, and maybe did better.” 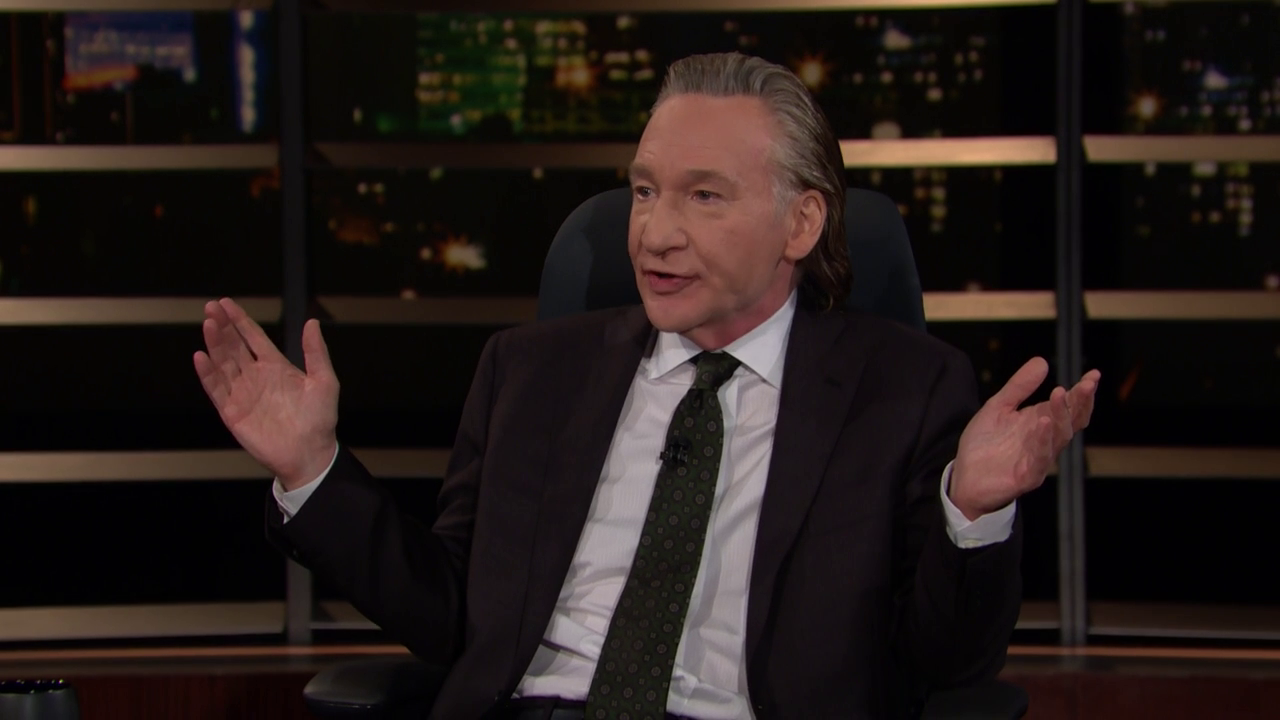 In an interview with Deadline, ahead of last Friday’s new episode of Real Time with Bill Maher, the commentator stated, “I feel like COVID is still the dominant issue of our lives right now and it should not be anymore,” going on to posit the question, “should we continue with the COVID policies we’ve had in the past?”

“I mean, we’re in a very different place with COVID than we were just when I was on the air last time, and that is the vaccines, we know, do not prevent you from either transmitting it or getting the disease,” Maher continued. 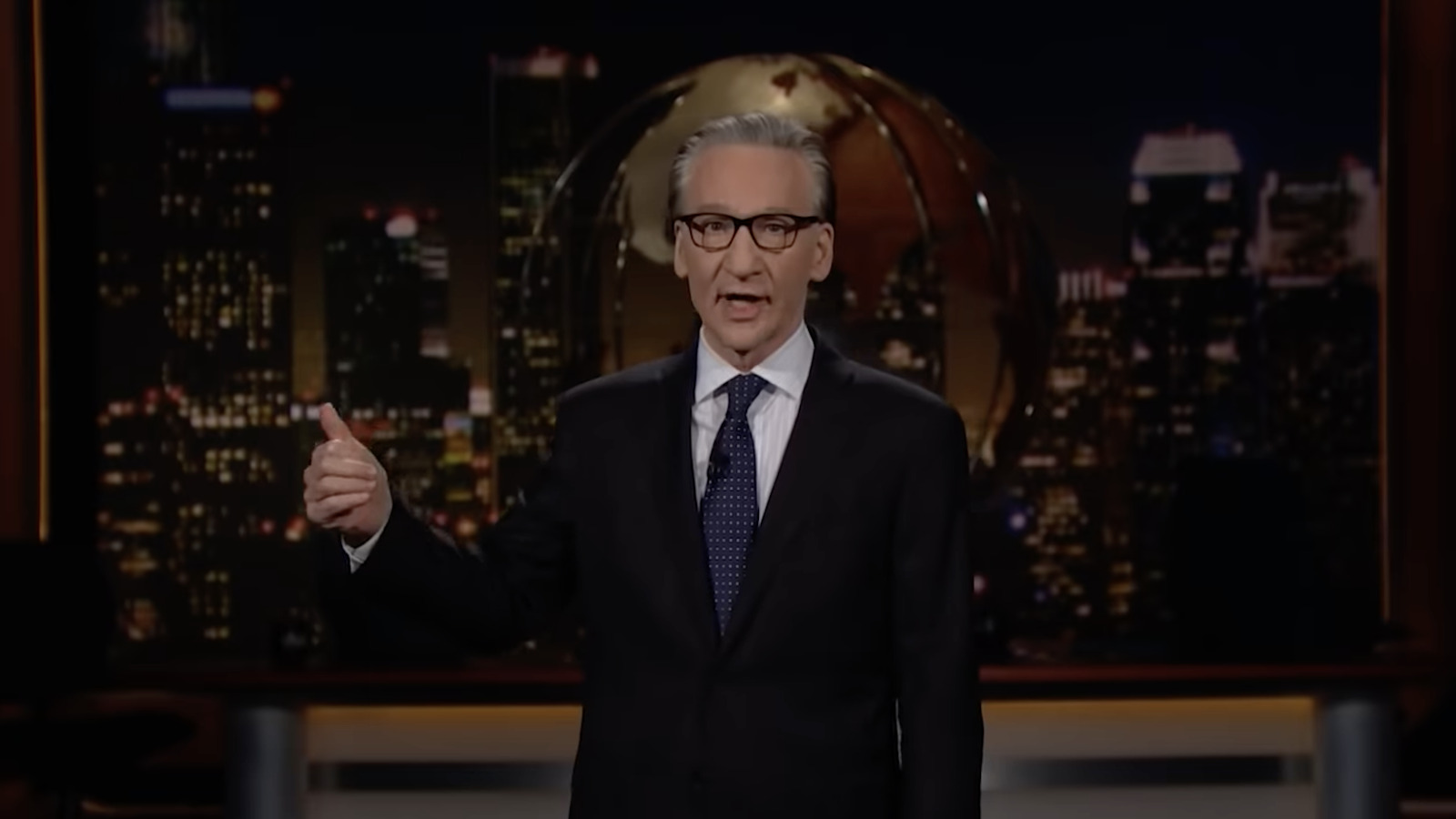 Interestingly, most of the backlash Bill Maher has received for expressing his opinion on COVID-19 came from disgruntled users on Twitter, who took issue with a particular comment that the comedian didn’t even make on the show.

“Joe Biden announced he will give away 400 million N95 masks. The masks come in three sizes: Small, Medium & Virtue-signal,” read the caption of a tweet shared on Bill Maher’s official Twitter account, which also included the commentator’s opening monologue.

Joe Biden announced he will give away 400 million N95 masks. The masks come in three sizes: Small, Medium & Virtue-signal. pic.twitter.com/t4aKnMejst

“Not a good show tonight! Great Russian TalkingPoints Bill!” read one of the comments under Maher’s tweet.

“Heaven forbid he tries to do something to help people,” wrote @HMQueenThicc3rd, who seems to have taken issue with the comedian’s criticism of President Biden’s N95 mask initiative.

User @SenoritaDi wrote, “Talk to the overwhelmed medical community before you say you’re over it..”

Disgruntled user @JoeSchlabotnic asserted, “I asked you not to make jokes about COVID, and here you are, not making jokes. Sir I salute you”

“I used to like you,” prefaced the comment of yet another disappointed user. “I had tickets to see you in Vancouver, but Covid killed that. I think I’m OK with it now, and I will not try to get tickets next time you are here.” 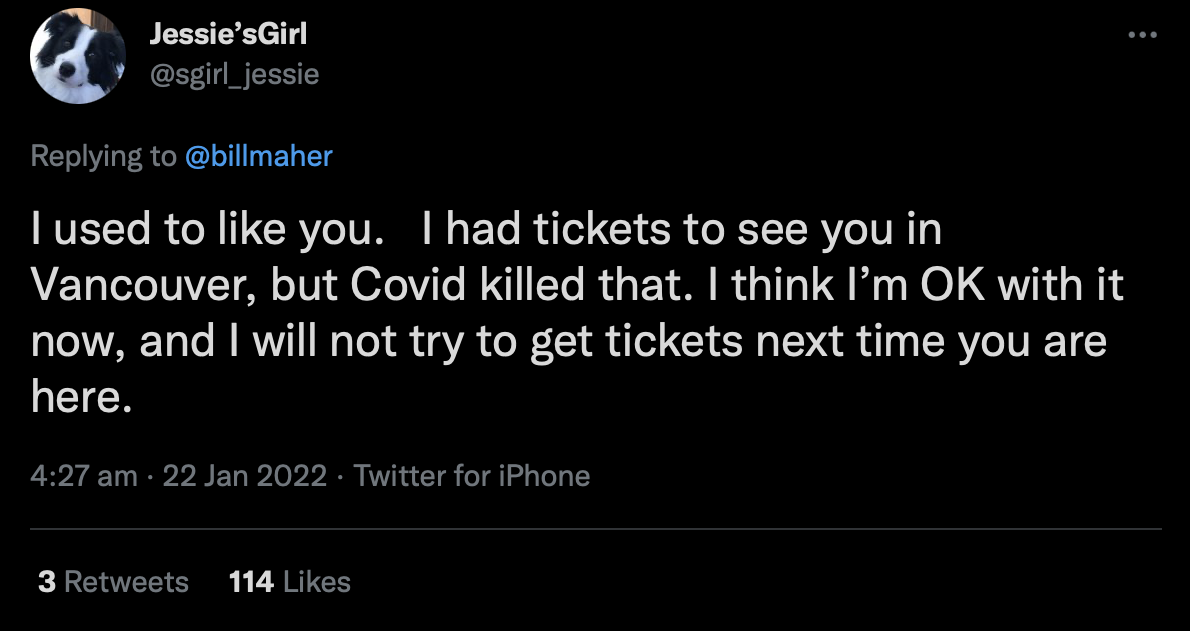 “How is it that those glasses made you less smart?” asked @11demo11. “About time for me to drop HBO. I can probably find John Oliver elsewhere, and I finished West Wing.” 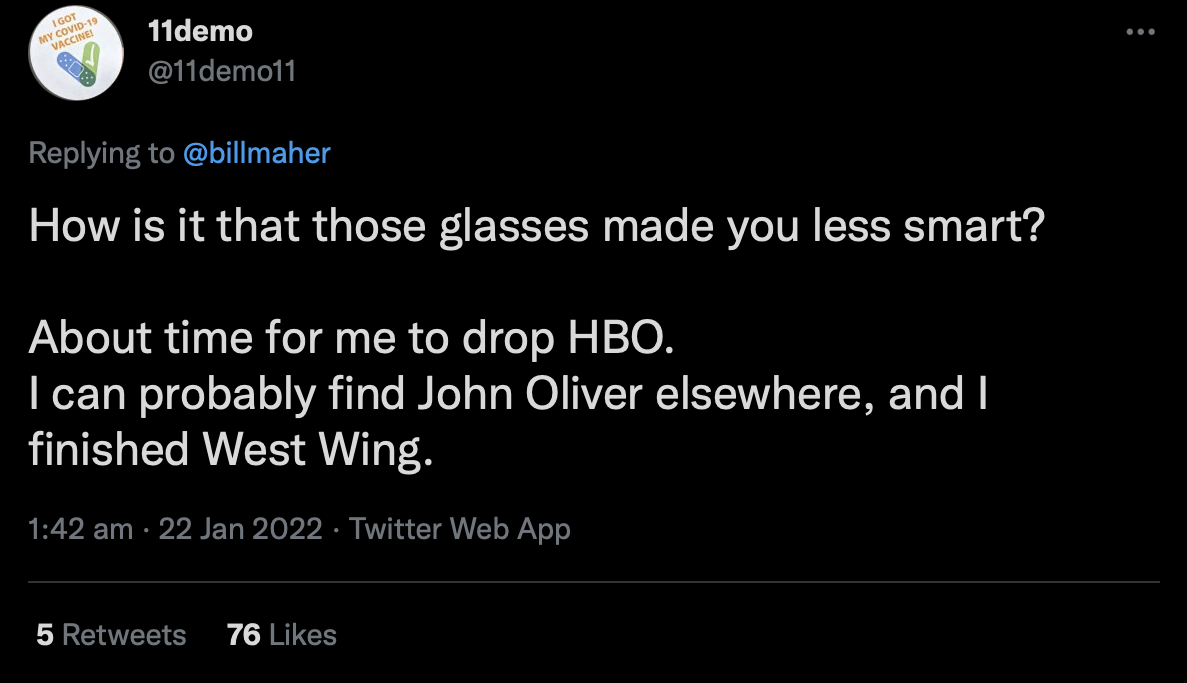 “Hey! NEWS FOR YOU BILL! Protecting others is a virtue. Virtues are good! Why don’t you know that?” said @Democracy_Saves.

“Pissing and moaning about masks? There are too many unvaxed out there. I’ll keep wearing my N95’s thank you,” virtue signalled @concowjade.

“You’re like 70 and live on the set of your show, when was the last time you talked to anyone outside of a three mile radius” asked Twitter user @RuckCohlchez.

“This is the first time I’ve turned off Real Time. I’m tired of listening to Maher crying over Covid masking. The show tonight was not funny. So disappointing, it used to be good,” stated @Kaferkul. 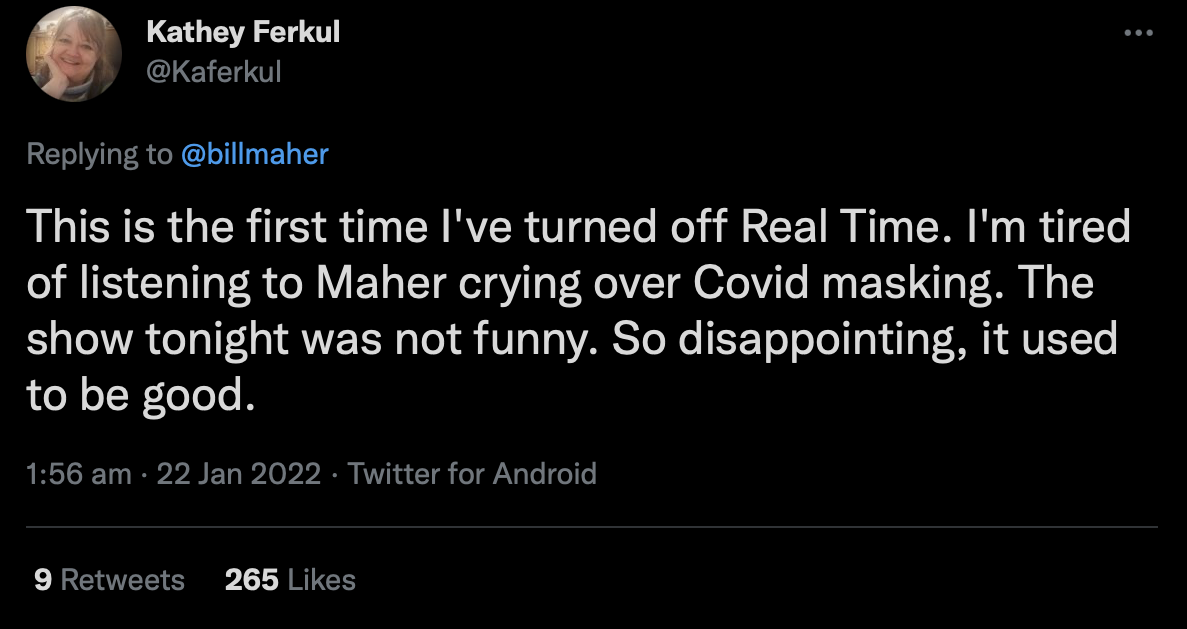 “I too hate it when politicians signal virtues like ‘not wanting people to die,'” read @BerkmanOnlyfans’ sarcastic remark.

Another comparison to Fox News was brought forward by @AmoneyResists, who wrote, “Are you auditioning for Fox now? WTF is this??”

“Bill I like your show most weeks but you were incredibly offensive to us physicians who are working 100 hrs a week covering for our sick coworkers with covid,” wrote @chelswhitl.

The offended Twitter user added, “Taking care of patients in chairs because we have no beds for 36 hours and telling my breast cancer [patient] surgery is delayed” 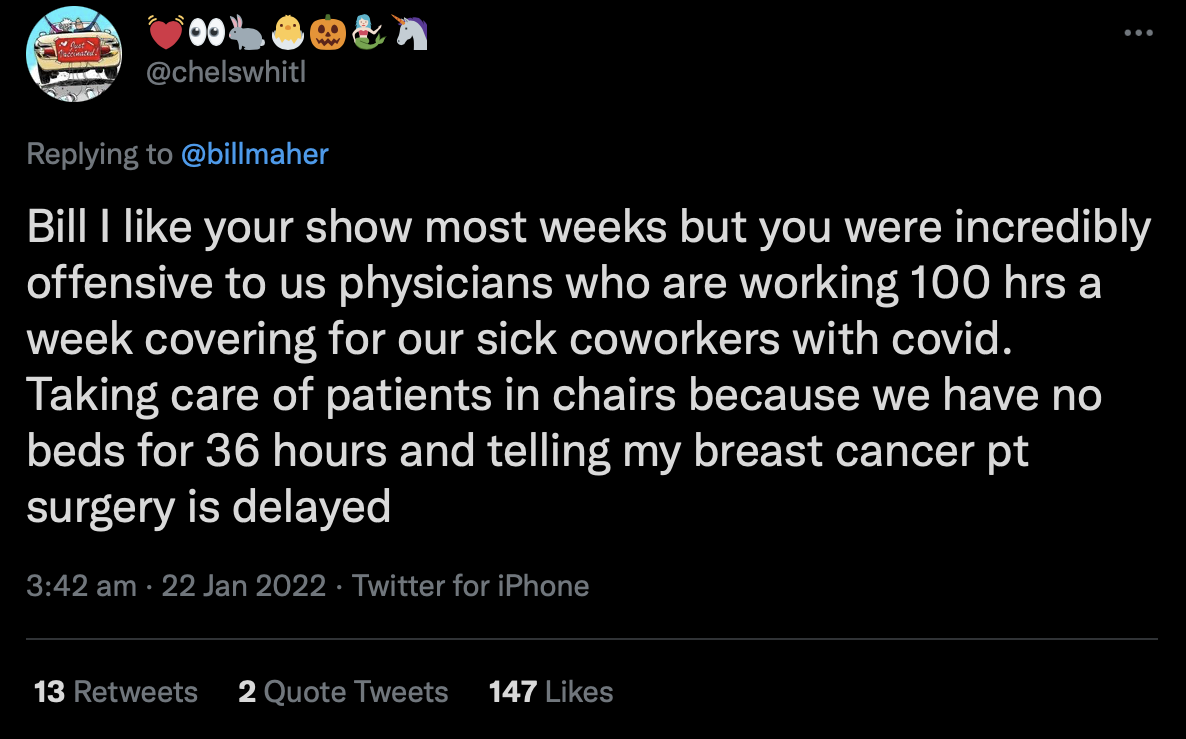 “Really bad show Bill. We need your support to get through covid not your ridicule,” asserted @dkaroczun.

“Find yourself someone who loves you as much as Bill Maher loves Bill Maher,” opined @DrivingMisCrazy.

What do you make of the social media backlash Bill Maher has received over his recent comments on COVID-19 mask mandates? Let us know your thoughts in the comments section down below or on social media.

NEXT: Bill Maher Slams Lin-Manuel Miranda For Bending The Knee And Apologising To The Woke Cancel Mob For In The Heights’ Lack Of Afro-Latino Representation