Evangeline Lilly has become the most recent target of the woke cancel culture mob after the Ant-Man and the Wasp actress encouraged Canadian Prime Minister Justin Trudeau to sit down with Ottawa truckers protesting the country’s COVID-19 vaccine mandates and “listen to what they have to say.”

In a 5-minute long video shared to her social media, Lilly addressed Trudeau and asserted, “Dear Prime Minister Trudeau, I want to speak to you today about your current approach to and treatment of our fellow Canadians who are protesting your federal vaccine mandates.”

“They have asked to meet with you, prime minister, medical experts, top scientists, doctors, nurses, parents, grandparents, intelligent, loving, concerned citizens,” she added, attempting to appeal to his humanity. “Why won’t you sit with them?”

“If you are so convinced of your own reasons for the mandates, sit down and walk the leaders of the group of 2.3 million protesters across the country — who represent many millions more across the nation — and explain it to them and ask them to listen with open hearts and minds, and then reciprocate,” Lilly encouraged Trudeau.

“Listen to what they have to say with a mind open to hearing things that might go against the ideas you are entrenched in,” she continued. “Maybe there are solutions that can bring Canadians together right now that you have not considered.”

The Wasp actress further explained, “You unify people by finding solutions together, not by vilifying those who say there is a better way.”

“What we need right now from our leadership is unification, and that requires being willing to see, recognise and hear from the people sitting out in the cold at your door,” Lilly urged the Canadian Prime Minister.

Even though Lilly is a left-leaning celebrity, her open support of the truckers’ Freedom Convoy drew the ire of the cancel culture mob, who responded to her video by clamouring for the actress to be cancelled and her Marvel character recast.

Mashable India writer @pramitheus called not only for Lilly’s MCU recasting, but also Black Panther actress Letitia Wright, who has received backlash since December of 2020 for her skepticism of COVID-19 vaccines.

“I repeat: Recast. Immediate,” cried the woke Twitter user. “They shoulda recast Letitia Wright. They should recast Evangeline Lilly. Ain’t nothing THAT special about em. There are much more talented (and sane) actors out there who can take up their spot & make the set a safe space.” 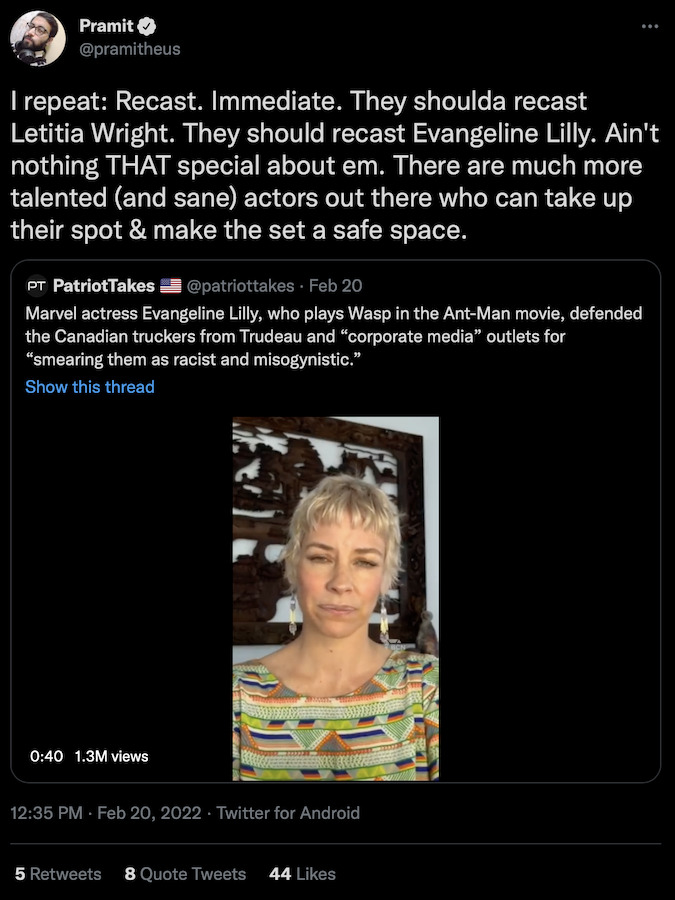 @blurayangel wrote, “I have two choices to play Wasp in the MCU when Evangeline Lilly gets replaced after Ant-Man and the Wasp: Quantumania,” putting forth Jennifer Garner and Kate Beckinsale as potential successors. 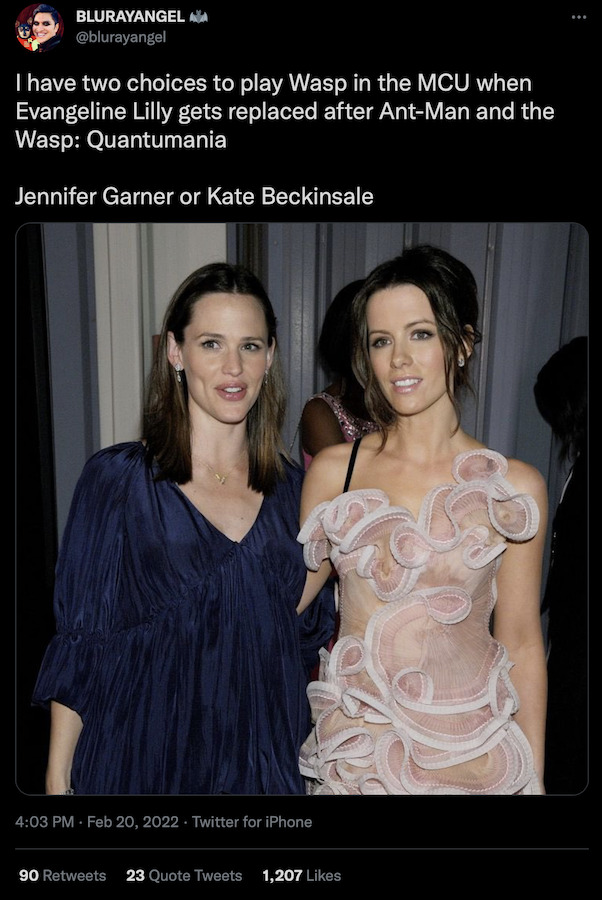 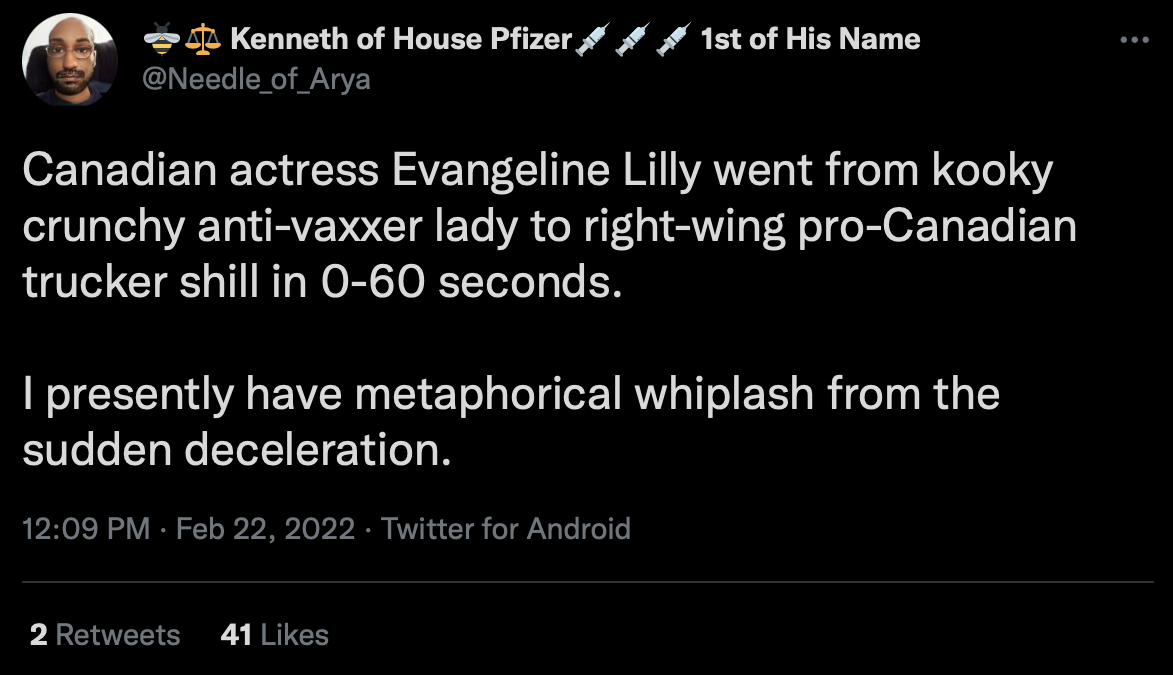 “Quietly replace Evangeline Lilly with Eva Green as the Wasp pass it on,” suggested @2KMockingbird, apparently offended by Lilly’s point of view.

User @GeorgeM68340969 said, “If Evangeline Lilly could be replaced with Neve Campbell in Ant-Man 3 I’m all for it.”

“If Marvel recast Evangeline Lilly I think many fans would not know the difference and let’s be honest if you did, would you care?” pondered @RealityRobbed2.

“Love seeing Evangeline Lilly kissing her career goodbye,” declared @MizuPerle, who seemingly couldn’t fathom the idea of someone having an opinion different than their own.

TikToker Austin Archer called for the Ant-Man and the Wasp: Quantumania actress’ cancellation, hypocritically writing, “Oh NOPE. I’m not one to quickly suggest a good old-fashioned cancelling, but I’m good on Evangeline Lilly.”

He added, “That’s more than enough from her for me. I’m totally cool if I never see her in a major studio film ever again. This is bulls–it.” 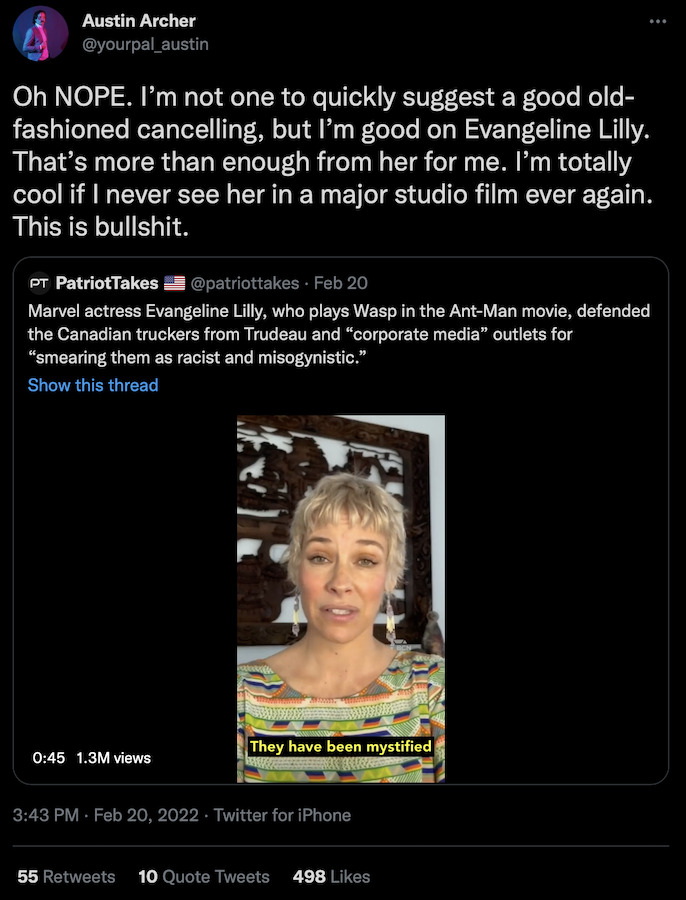 “Pretty sure people care about Wasp more than Evangeline Lilly,” wrote @ReedReads4. “Recast her. We don’t need more of this in the MCU fandom.” 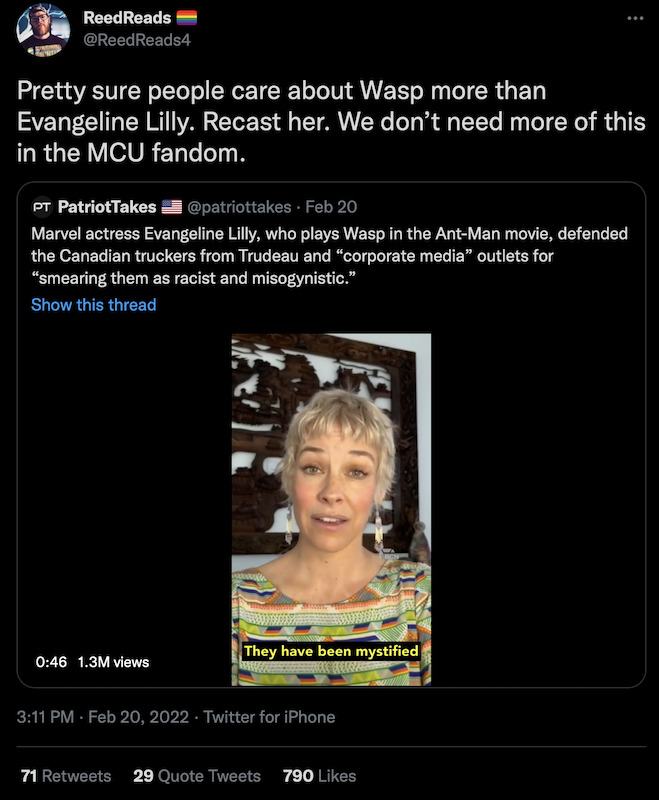 Former BuzzFeed editor Kristin Chirico asked, “Why would Evangeline Lilly be so loud when Jennifer Garner and Kate Beckinsdale are still literally right over there existing and good at acting”. 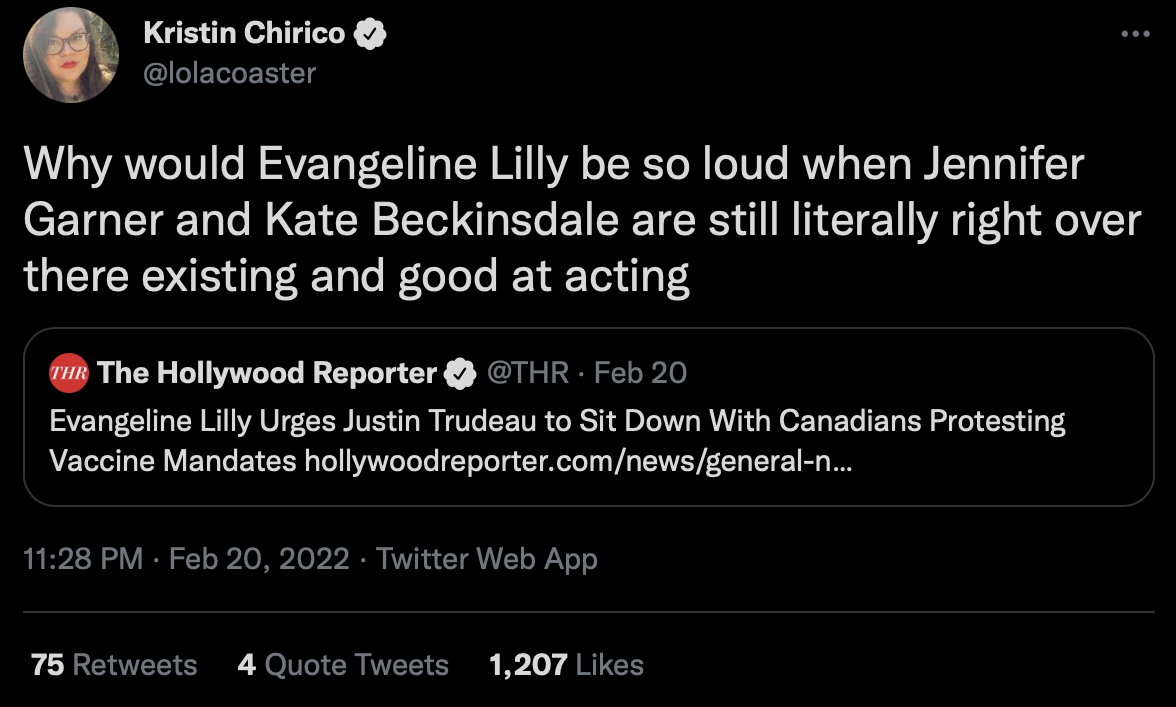 Lilly previously found herself the target of outrage after she revealed that she had attended the anti-vaccine mandate rally that took place in Washington, D.C. late in January.

“I believe nobody should ever be forced to inject their body with anything, against their will,” wrote the Marvel actress at the time, taking to Instagram to share a handful of pictures she took at the event. 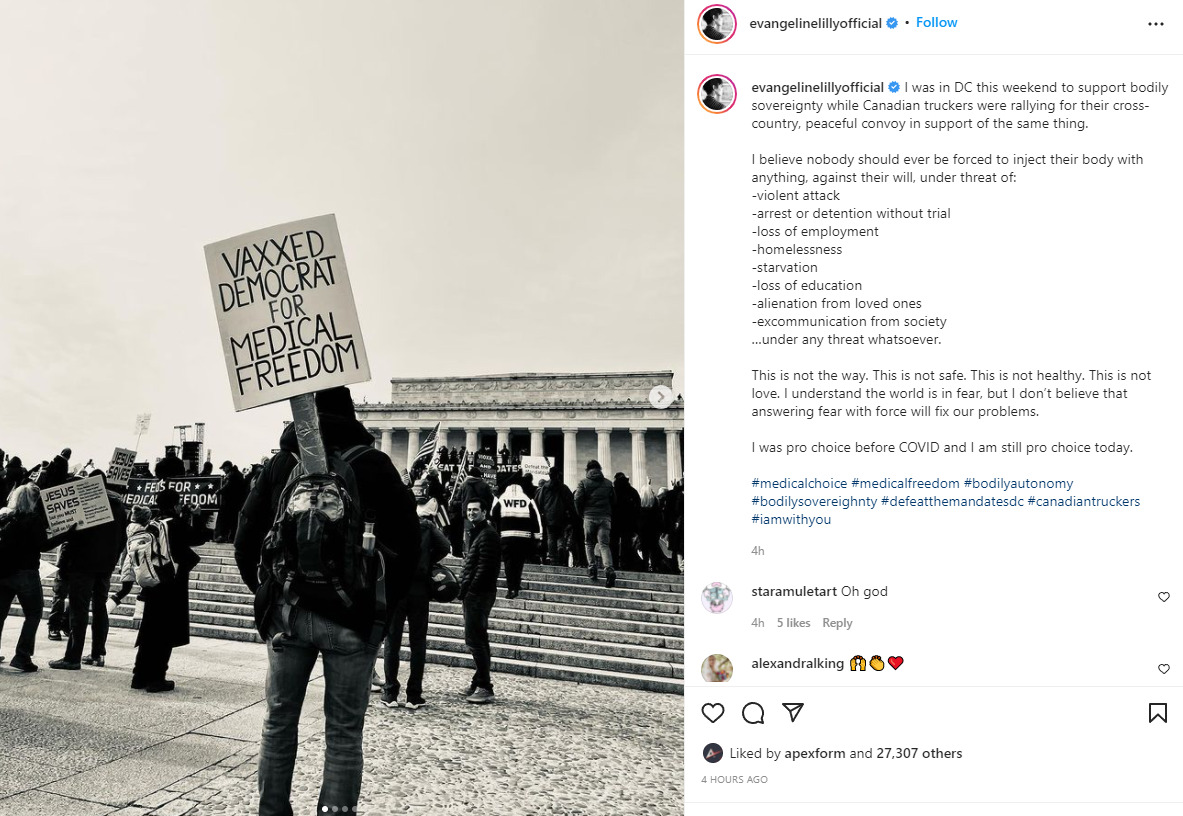 Lilly also condemned how unvaccinated individuals have been threatened with “violent attack, arrest or detention without trial, loss of employment, homelessness, starvation, loss of education, alienation from loved ones, excommunication from society” just for refusing to get inoculated.

What do you make of Lilly being targeted by the cancel culture mob over her views on COVID-19 vaccine mandates? Let us know your thoughts in the comments section down below or on social media.