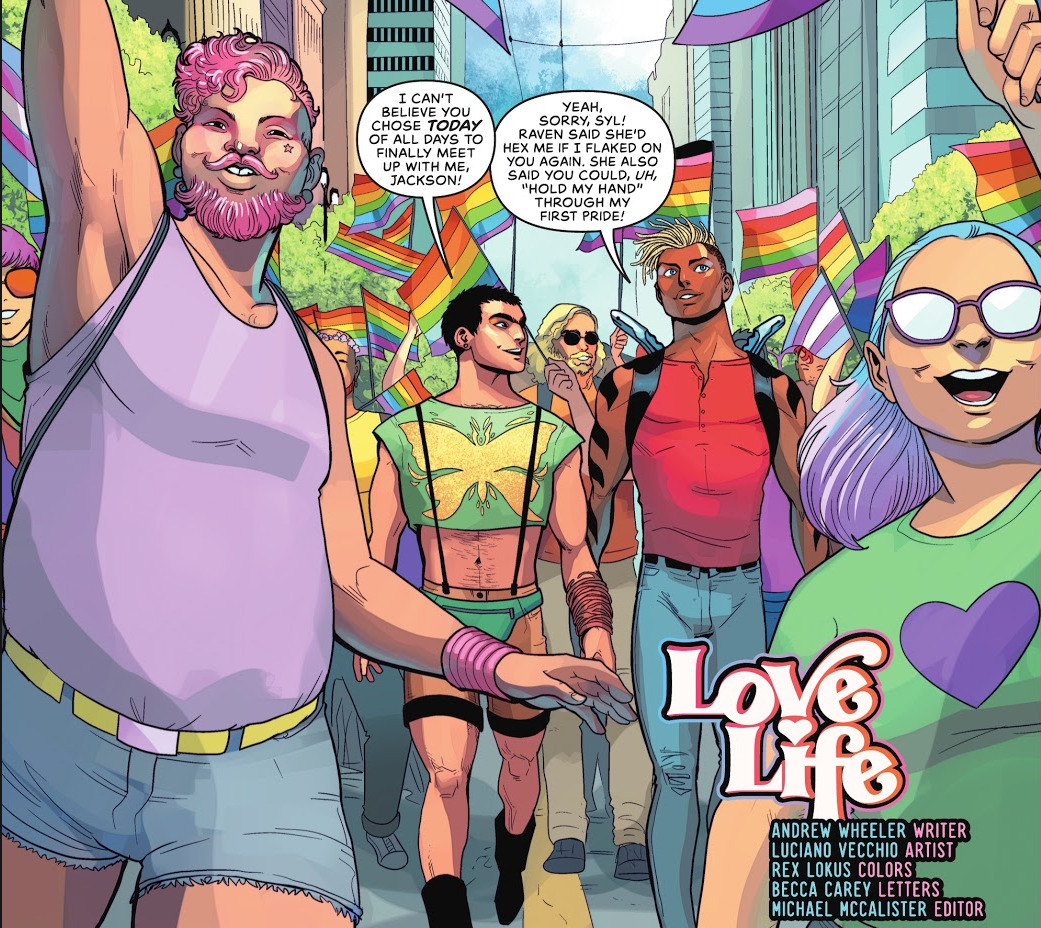 While the Editor-in-Chief at Comics Alliance, Wheeler made clear his goals were to radically alter the comic book world.

He wrote, “We need to get from some to enough. And really, we’ll know we’ve achieved success when Captain America can have a boyfriend, and Wonder Woman can have a girlfriend. For queer representation in superhero comics, that’s what success looks like.” 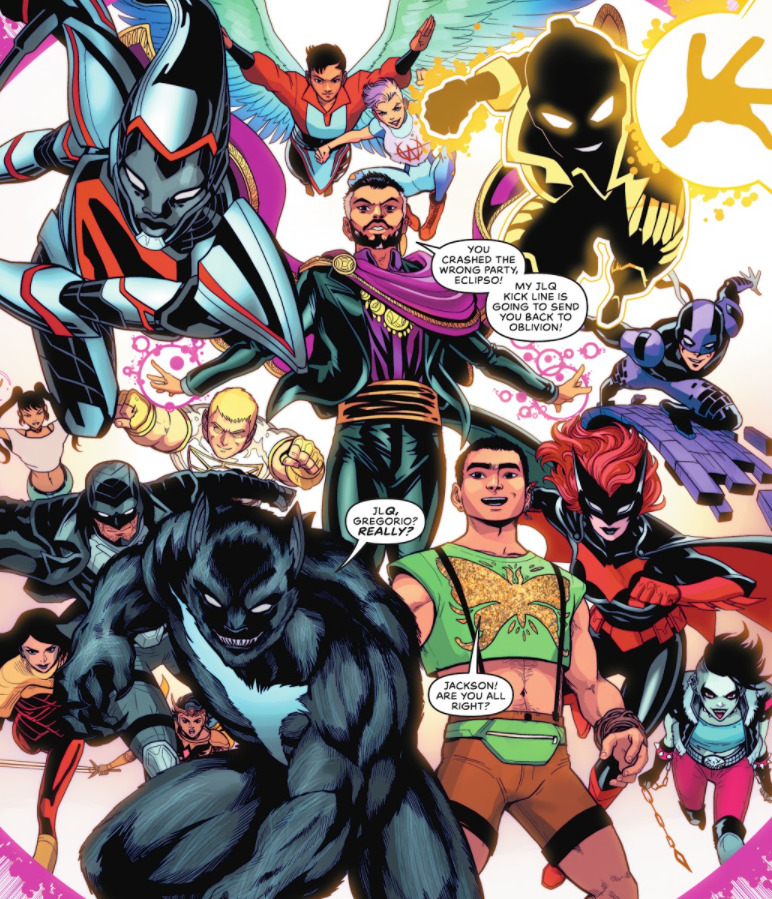 Wheeler’s claim regarding Rowling came after he accused her of “empowering far right forces.”

On March 12th, Rowling took to Twitter where she wrote, “I don’t think our politicians have the slightest idea how much anger is building among women from all walks of life at the attempts to threaten and intimidate them out of speaking publicly about their own rights, their own bodies and their own lives.” 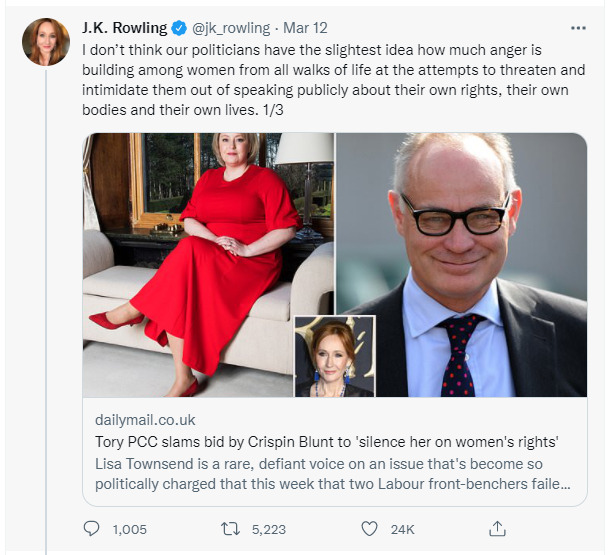 In a subsequent tweet she added, “Among the thousands of letters and emails I’ve received are disillusioned members of Labour, the Greens, the Lib Dems and the SNP. Women are scared, outraged and angry at the deaf ear turned to their well-founded concerns. But women are organising.”

She concluded the short thread writing, “Now Keir Starmer publicly misrepresents equalities law, in yet another indication that the Labour Party can no longer be counted on to defend women’s rights. But I repeat: women are organising across party lines, and their resolve and their anger are growing.” 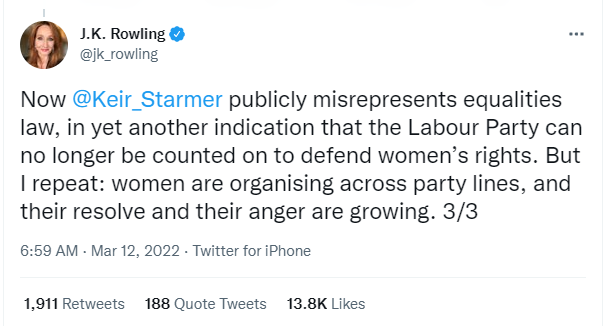 In response to this thread a Twitter user by the name of JonnyWorst wrote, “Thank you for speaking up so powerfully. It’s a tragedy and a scandal that our gay rights organisations are now dedicated to undermining both women’s rights and the very foundation of same-sex attraction.”

Rowling responded to the tweet writing, “Innumerable gay people have been in touch with me to say exactly this. Like women, they – especially lesbians – are under attack for not wishing to be redefined and for refusing to use ideological language they find offensive.”

Wheeler would respond to this tweet from Rowling accusing her of “empowering far right forces.”

He wrote, “You are empowering far right forces that endanger all women and queer people with misleading and hateful rhetoric. It’s not too late for you to walk back from the dark path you’ve found yourself on.”

“Please listen to the people who are asking you to lead with love,” he added. 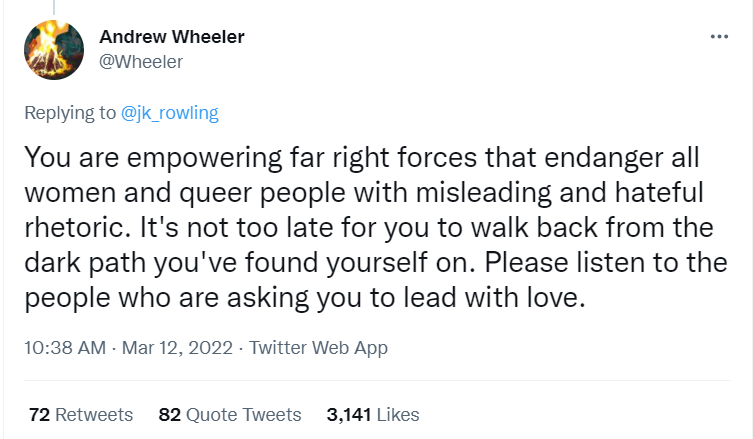 Wheeler would add, “(I won’t see your responses to this, folks, so why not spend the time you might have used crafting a scathing put-down to instead reflect on how the authoritarian right manufactures ‘culture wars’ to divide its opponents. Love and light. Protect trans kids.)” 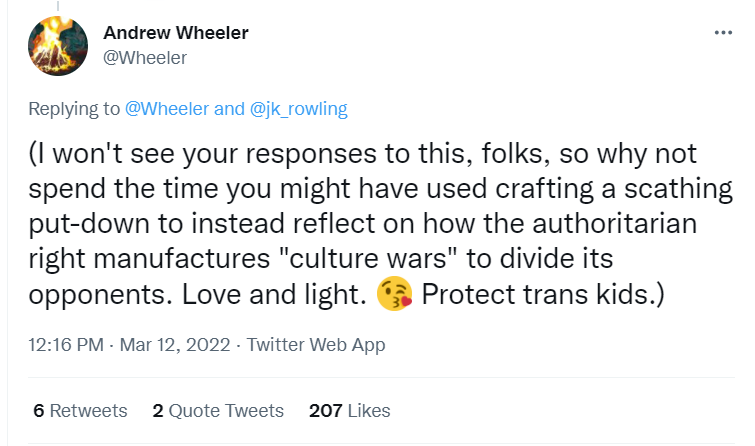 Rowling then questioned, “Which of these two positions are most alike, Andrew?” 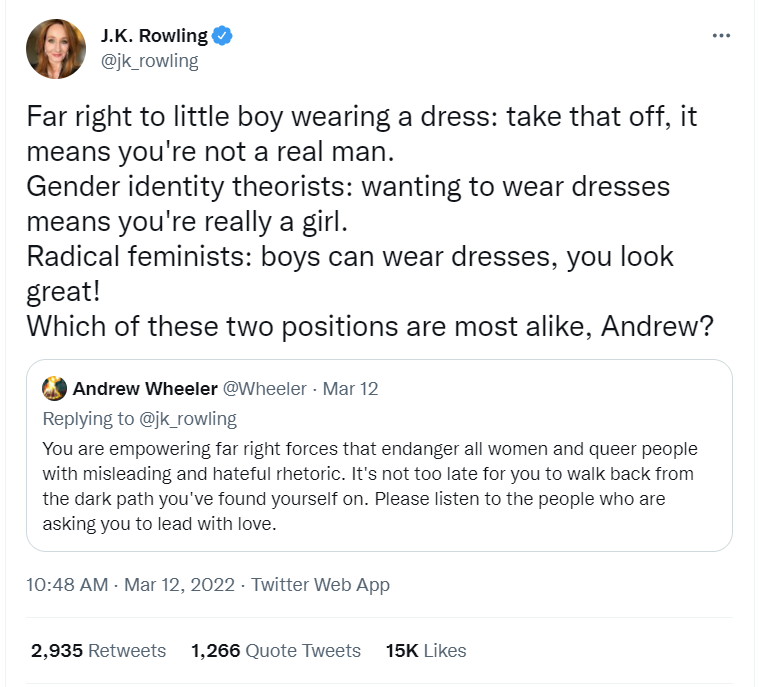 It’s this tweet that Wheeler claims that Rowling is “playing with my personal safety for rhetorical clout.”

He would write on Twitter, “I would prepare to give R the benefit of the doubt, to believe that she cannot conceive of the scale of the abuse she invites into people’s lives, but this is extraordinary.”

She retweeted someone who tried to link me to ‘paedophiles, rapists & misogynists.'”

He then shared a screenshot of Rowling retweeting a user that responded to Wheeler claiming that Rowling was empowering far right forces. The user wrote, “I agree the far right must be happy about the Left split on gender. OTOH paedophiles, rapists & misogynists are identifying as queer and coming after women who speak up about their rights.”

“And men like this [referring to Wheeler] are joining in which must be a really dark path to find yourself on,” the user added. 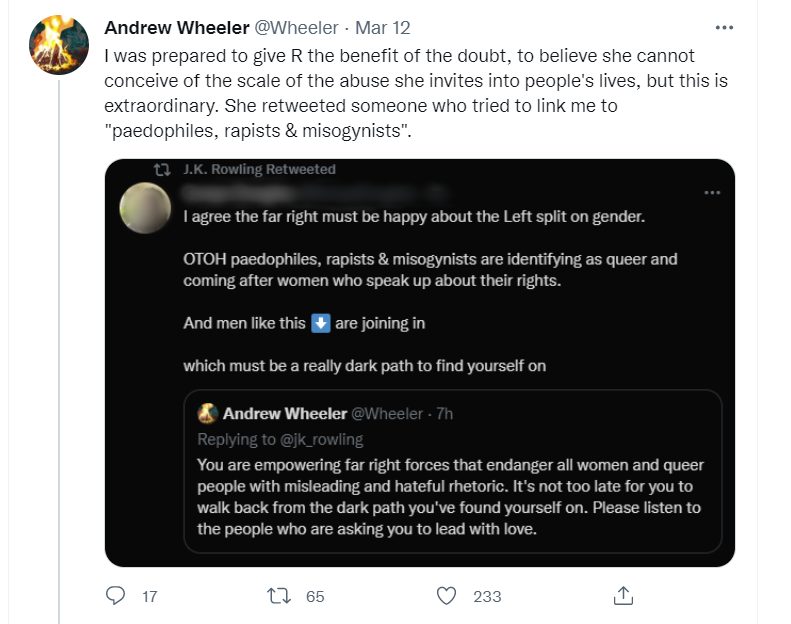 In a subsequent tweet he claimed, “She’s playing with my personal safety for rhetorical clout. She’s inviting death threats against me because I asked her to lead with love rather than play into the hands of the far right.”

“Ms Rowling, please, look at what comes so easily to you. Look at what you’ve become,” he pleaded. 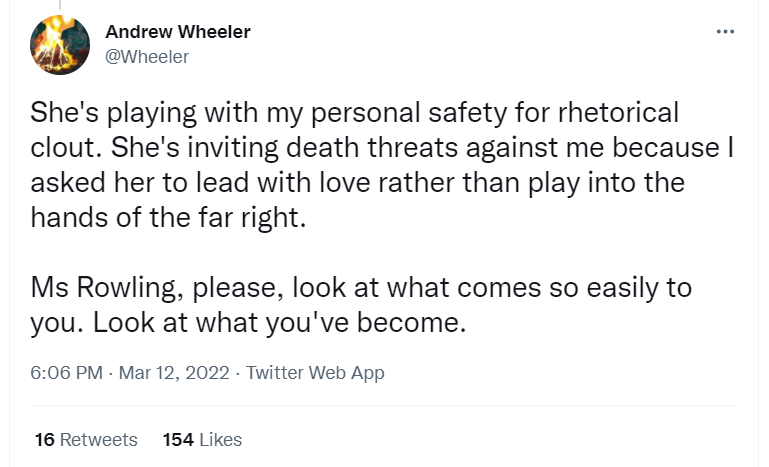 He concluded, “(PS. When I say the benefit of the doubt, I mean specifically with regards to her use of quote retweeting to her 14m followers. Her attitudes in other regards have been beyond any doubt for some time now.) (This is the person who claimed it was doxxing to photograph her house!)” 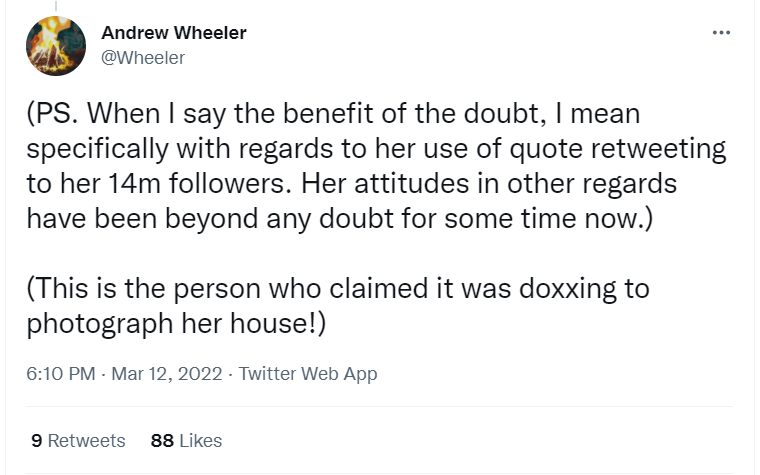 He would double down on his claim that Rowling is putting his safety at risk as well as his accusations against Rowling in an email newsletter.

He began the email writing, “If you didn’t hear, one of the world’s most popular authors sent her 14 million Twitter followers after me because I asked her to reconsider her rhetoric on trans issues.”

As clearly noted above, this is a blatant lie. He accused her of empowering far right voices and claimed she was endangering women and queer people. 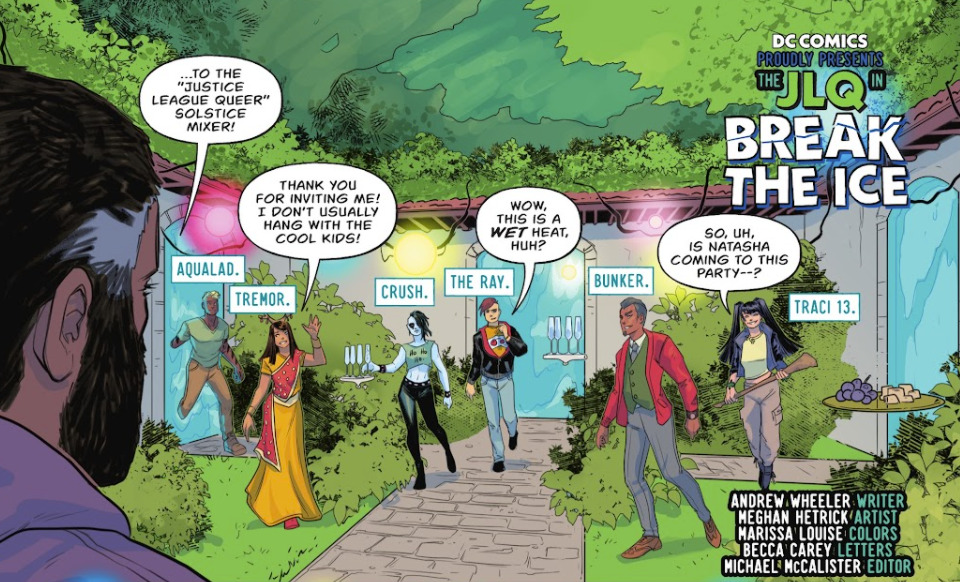 Source: ‘Tis The Season To Be Freezin’

Not to stop there with his lies, Wheeler then accused Rowling of contributing “to a pervasive atmosphere of hostility towards trans and queer people that has been weaponized as a ‘culture war’ by far right politicians.”

Ironically, Wheeler then noted that he made sure he didn’t see any responses from Rowling’s followers. He wrote, “I didn’t see those responses because I immediately set up filters that blocked them out, but enough friends reached out in concern that I knew the responses were, let’s say, candid and enthusiastic.” 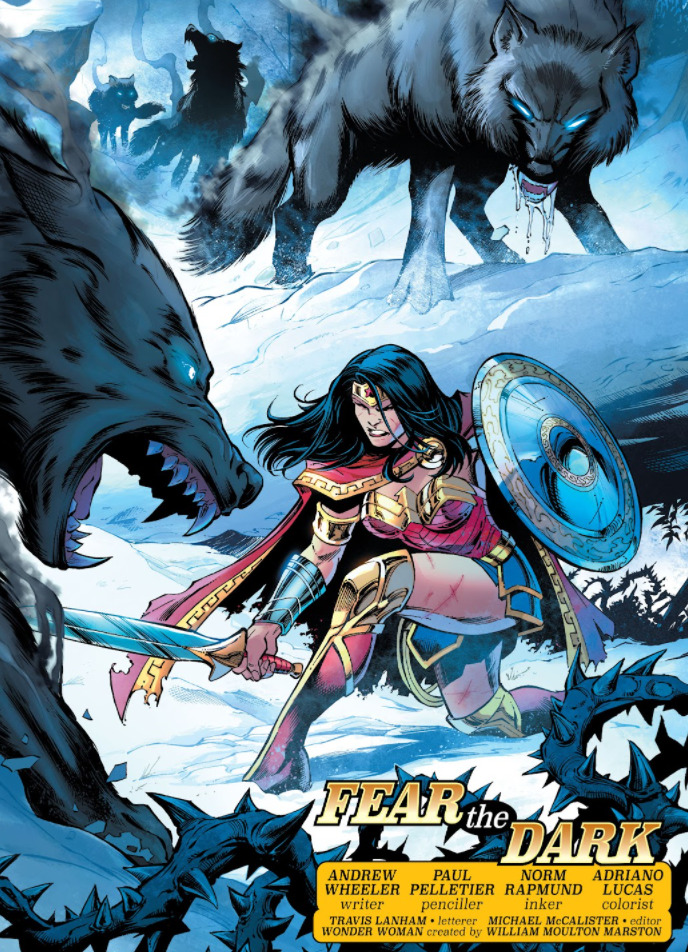 Wheeler then makes the absurd claim that quote tweeting someone is inviting abuse. He stated, “When someone with a lot of followers quote-tweets to disagree with someone, they’re inviting harassment and abuse towards that person. I’m small-fry and I still avoid using quote-tweets to dunk on people with less of a platform than me.”

He went on to claim that by quote tweeting someone who noted that “paedophiles, rapists & misogynists are identifying as queer and coming after women who speak up about their rights” Rowling “had invited a threat to my safety that may hang over me for the rest of my life. Or end it.”

He continued, “Honestly, there are fewer Belgians in the world than there are people who now might want me dead.” 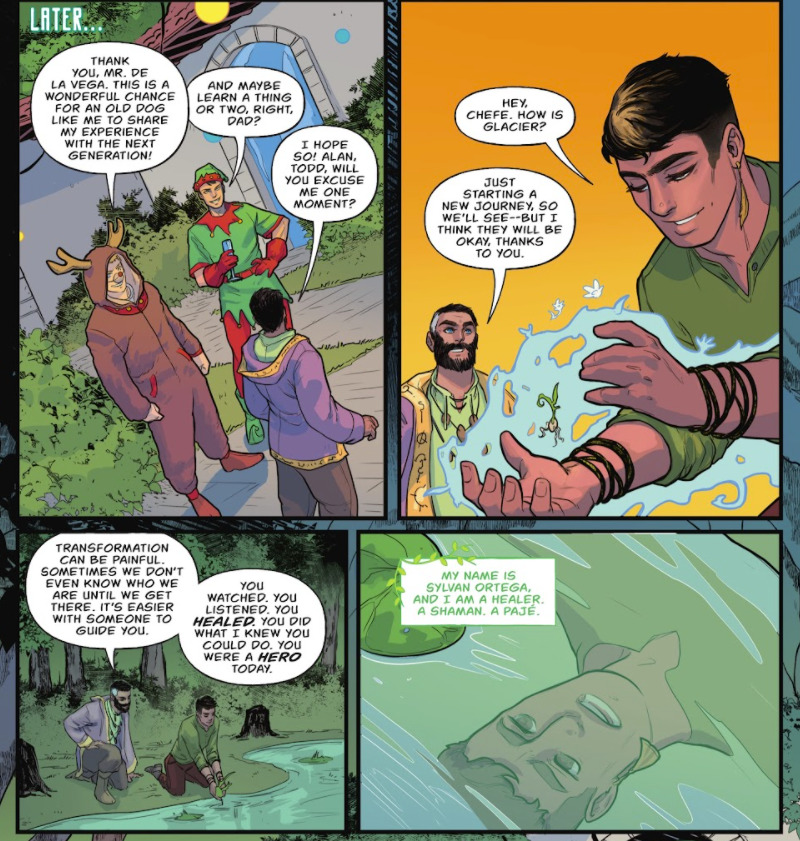 Source: ‘Tis The Season To Be Freezin’

Wheeler then accused Rowling of harming trans kids. He wrote, “Anti-trans rhetoric hurts vulnerable populations, especially trans kids. It encourages the kind of hateful legislation that we’re seeing sweep the US. It destroys lives and it racks up a body count.”

He concluded his email, “I’m just collateral damage. The author wasn’t thinking about my safety when she quote-tweeted me, just as she isn’t thinking about trans kids when she elevates the bogeyman rhetoric that has hurt queer people for almost a century. She doesn’t seem to understand the power of her words.” 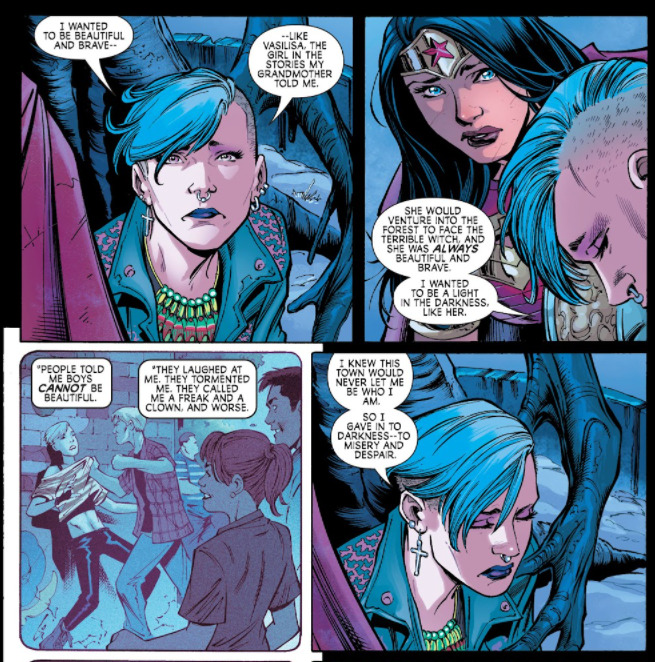 What do you make of Wheeler’s accusation against Rowling that by simply quote tweeting him and retweeting another response to him that Rowling his putting his safety in danger?

NEXT: Daily Dot Social Media Editor Anna Maria Asks Why Harry Potter Creator J.K. Rowling Has “Not Gotten Jumped Yet,” Wishes She Gets Punched In The Face