Hours before their own employees stage a walkout in protest of the initial lack of support from Disney regarding Florida’s Parental Rights in Education bill, Disney owned subsidiaries are making uniform statements in support of transgender athletes and children as well as the LGBTQIA+ community that appears to show their support for classroom instruction regarding gender identity and sexual orientation. 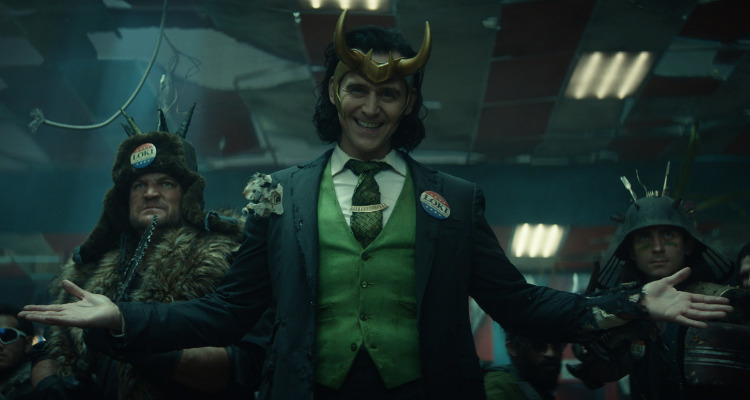 Disney-owned properties ESPN, Hulu, Disney+, and Disney Parks have shared public statements on their official social media channels to express solidarity with their LGBTQ employees and denounce anti-LGBTQ legislation such as Florida’s Parental Rights in Education bill that bans teaching of sexual orientation or gender identity to students in kindergarten through third grade.

The bill has been labeled an Anti-grooming bill by Florida Governor Ron DeSantis’ press secretary Christina Pushaw while opponents have labeled it the “Don’t Say Gay” bill.

ESPN, the sports network owned by Disney, made a public statement taking a standing for LGBTQ athletes and transgender children.

The message begins, “ESPN believes in inclusivity and denounces legislation and actions across the United States that infringe on any human rights. We stand with our LGBTQIA+ colleagues, friends, families, and fans.”

It continued, “We’ll continue to partner with organizations that support the LGBTQIA+ community, be accountable where we fall short of expectations, and never stop telling stories about LGBTQIA+ athletes, like the ones that we’ll be sharing in this thread.” 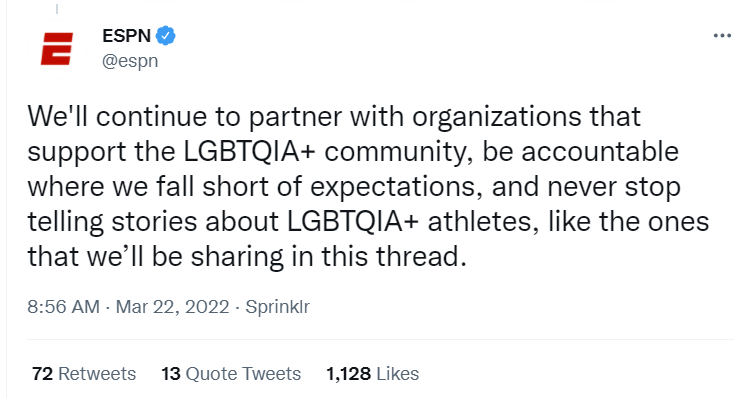 Next, they tweeted, “Transgender kids in the U.S. are stuck in the middle of the ongoing debate over science and assumption, sex and gender identity, politics, and policy.”

ESPN then shared an article written by the network that makes the case for transgender athletes to play in the sport of their “preferred gender.” 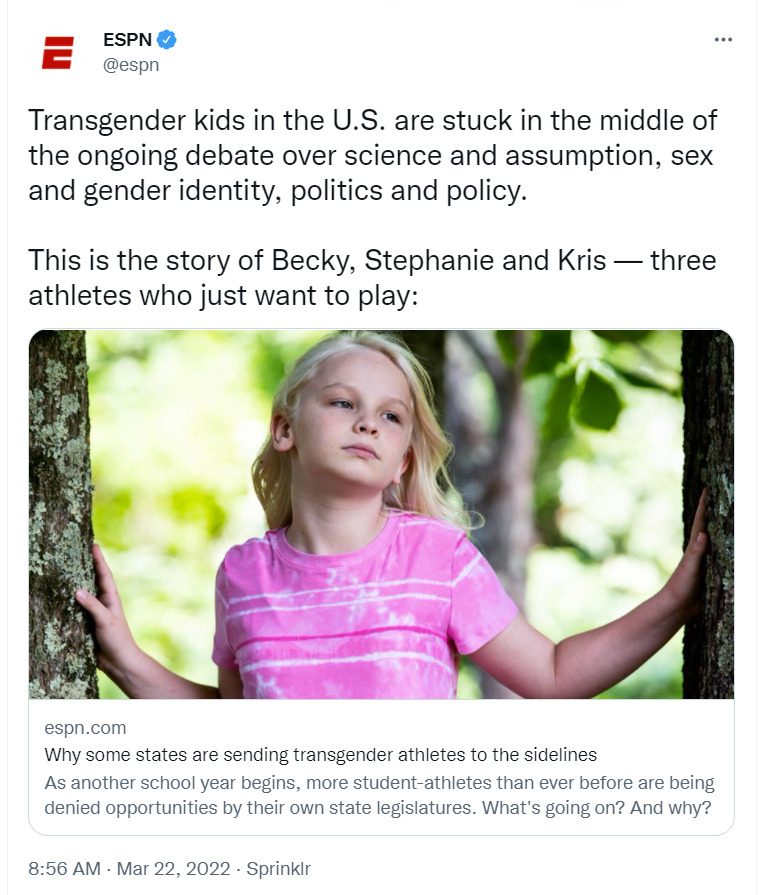 This comes off the heels of the public outcry behind University of Pennsylvania transgender swimmer William Thomas, who calls himself Lia, winning the women’s 500 freestyle national championship beating out biological women. An event that has many people concerned about the future of women’s sports if men are allowed to complete against women.

Hulu, another Disney-owned streaming service, followed suit making a stand in solidarity with “hulugans” in their workplace fighting for ‘human rights.’

The company tweeted, “Today and every day, we Hulugans are united against all legislation that infringes on the basic human rights of the LGBTQIA+ community.”

In a second tweet they added, “We stand with our LGBTQIA+ colleagues, storytellers, families, friends, and fans who are targeted by laws that marginalize and diminish their identities and lives. We remain committed to telling inclusive stories that unite us and celebrate the diverse LGBTQIA+ community.” 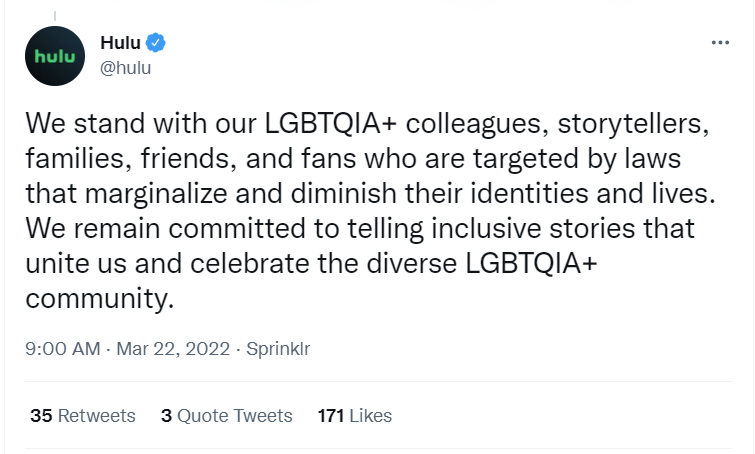 It began, “Disney+ stands by our LGBTQIA+ employees, colleagues, families, storytellers, and fans, and we strongly denounce all legislation that infringes on the basic human rights of people in the LGBTQIA+ community – especially legislation that targets and harms young people and their families.”

“We strive to create a service that reflects the world in which we live, and our hope is to be a source for inclusive, empowering, and authentic stories that unite us in our shared humanity,” the statement concluded. 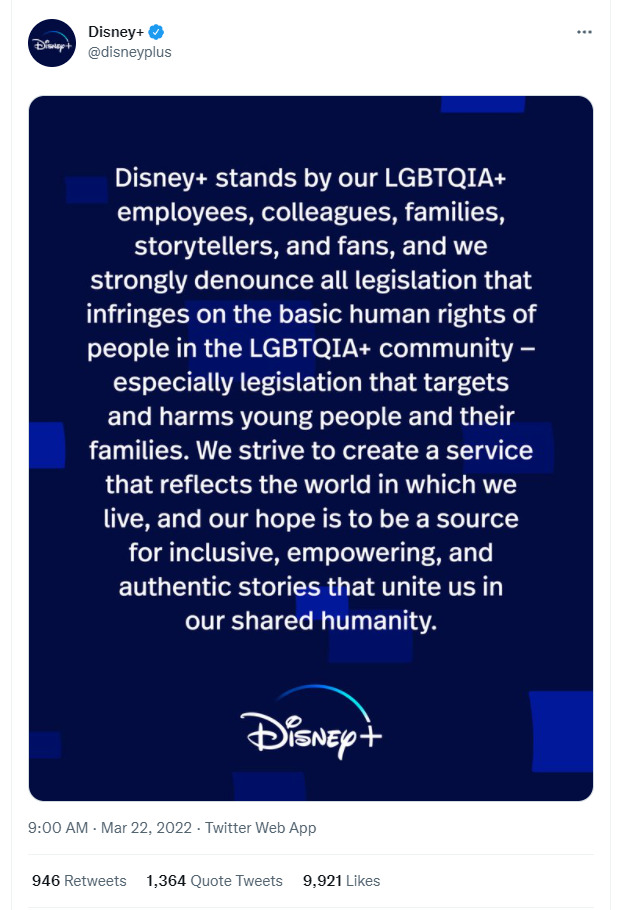 Walt Disney World posted to Instagram writing, “To ALL who come to this happy place, welcome. Disney Parks, Experiences and Products is committed to creating experiences that support family values for every family, and will not stand for discrimination in any form.

“We oppose any legislation that infringes on basic human rights, and stand in solidarity and support our LGBTQIA+ Cast, Crew, and Imagineers and fans who make their voices heard today and every day,” the account added. 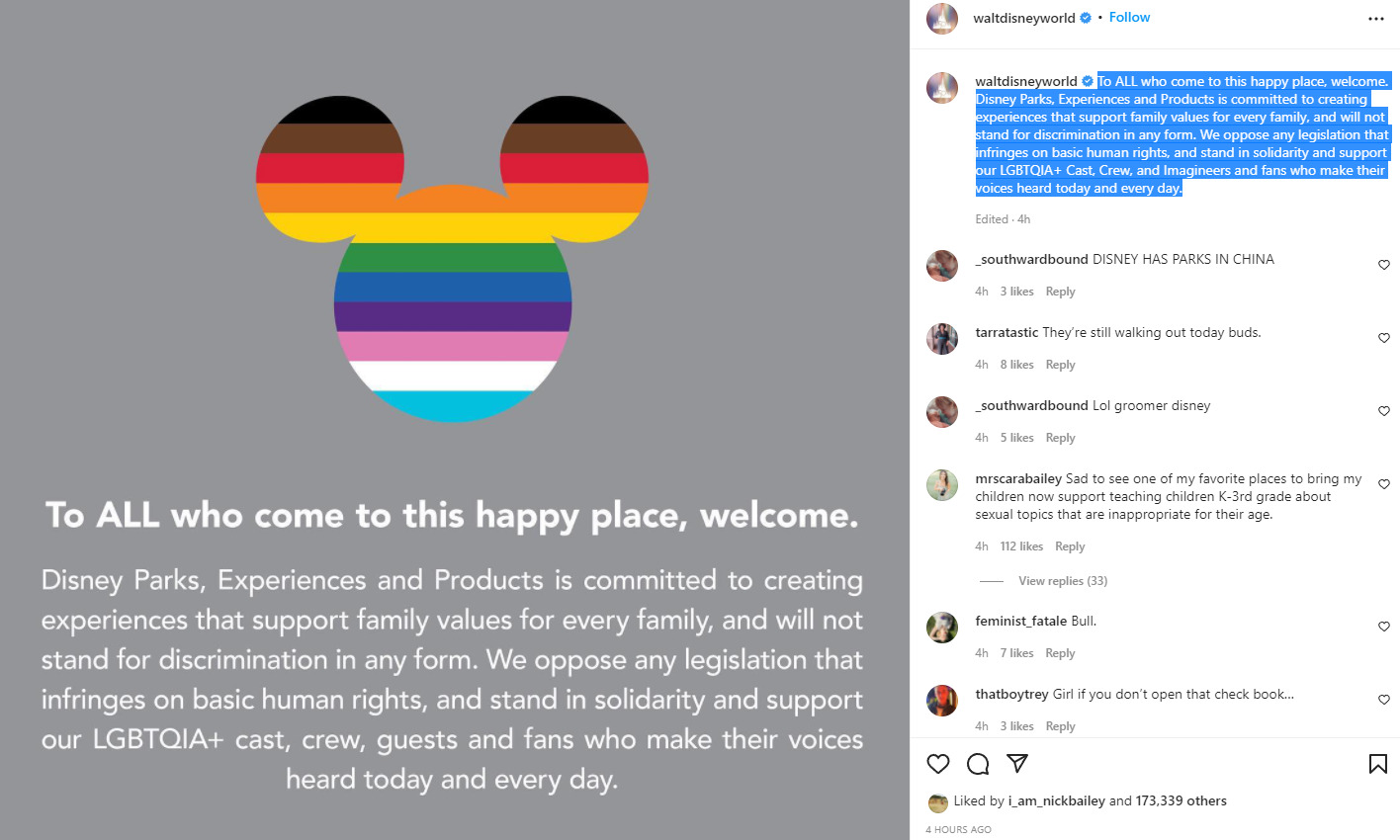 National Geographic, which is also owned by Disney, posted to Instagram writing, “We join in solidarity with our LGBTQIA+ colleagues, friends, families, and fans to strongly denounce all legislation that infringes on the basic human rights of the LGBTQIA+ and other marginalized communities.” 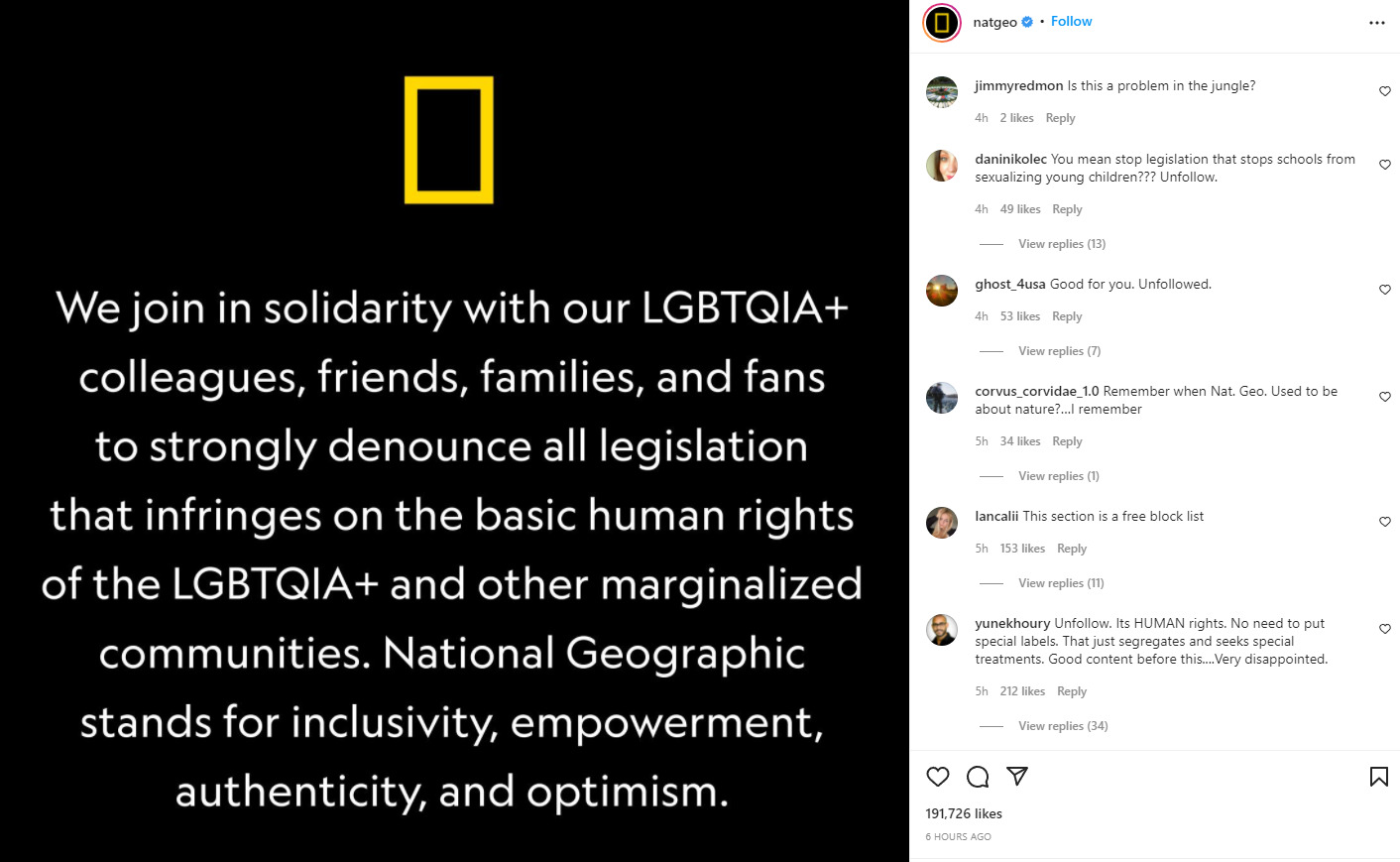 Last week, Marvel Studios, the production company behind the famed Marvel Cinematic Universe, published a statement to indicate their support for teaching gender and sexual identity to elementary school students.

It read, “We strongly denounce any and ALL legislation that infringes on the basic human rights of the LGBTQIA+ community. Marvel Studios stands for hope, inclusivity and strength; and we proudly stand with the community.”

“Today, we pledge to continue our strong commitment as allies who promote the values of equality, acceptance and respect,” it concluded. 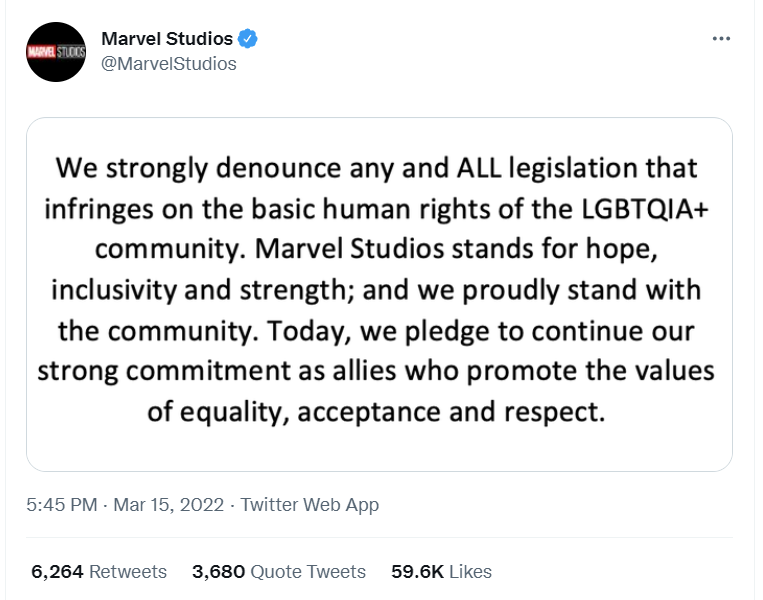 Disney has clearly taken a stand on two highly divisive social issues happening in this country right now. The fight to keep biological males out of women’s sports as well as keep public school teachers from grooming young children with instruction on gender identity and sexual orientation.

This comes after employees of Pixar, another Disney property, accused corporate executives of censoring nearly every moment of overtly gay affection in Pixar films, movies that are primarily aimed at children.

It was Chapek’s initial stance to not take sides on the Florida bill that led to the revolt of its LGBTQ employees in the first place. Disney employees have planned a staged walk out later today with a list of demands for the parent company which includes ceasing political donations to Florida politicians who voted for the bill, a stop to relocating employees from California to Florida, as well as stopping all construction and investment in the state of Florida.  Disney has held an internal emergency town hall meeting in an effort to appease LGBTQ employees who are engaging in the walkouts.

“I and the leadership team are determined to use this moment as a catalyst for more meaningful and lasting change,” Chapek said during the townhall meeting. 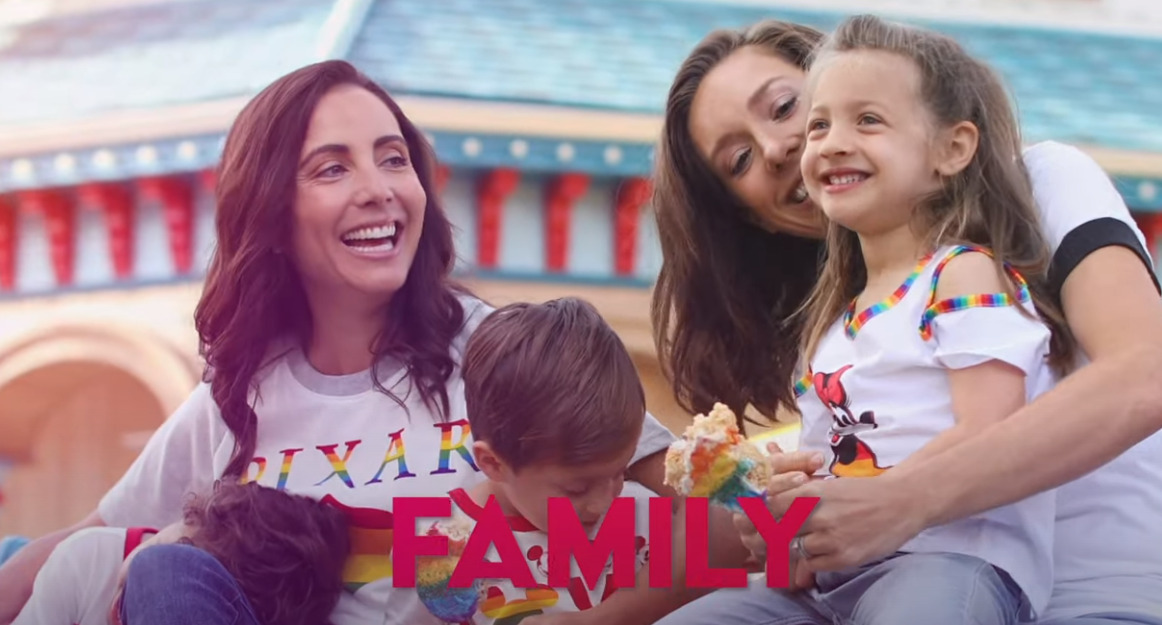 The public Twitter account “Disney Walkouts” which is organizing employee walkouts at Disney expressed their gratitude towards the company for it’s mass support of their efforts on social media.

“We would like to address the statements you will be seeing from Disney corporate accounts,” they wrote. “We support these messages. They were tirelessly advocated for by our own LGBTQIA+ co-workers to show support today.

“It’s an act of magic and is a true marker of how far we’ve pushed,” the account added. 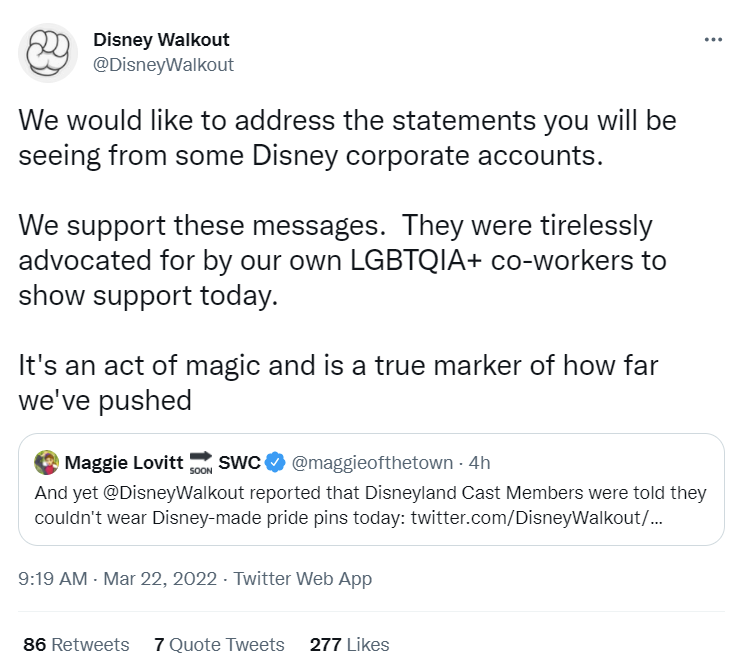 According to his press secretary Christina Pushaw, DeSantis stated, “It’s a free country, but understand: If you’re out protesting this bill, you are by definition putting yourself in favor of injecting sexual instruction to 5, 6 & 7-year-old kids. Most people think that’s wrong. Parents especially think that’s wrong.” 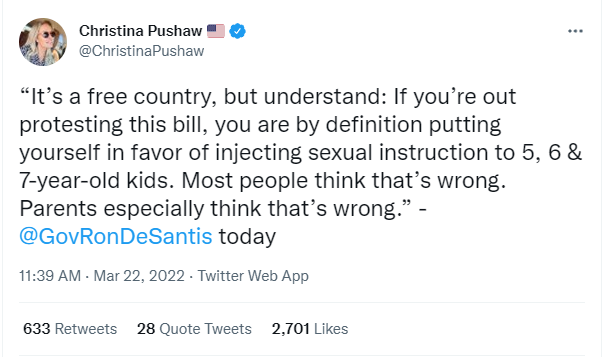 The Parental Rights in Education bill, which was passed by Florida’s state senate on March 8 is awaiting a signature from Gov. Ron DeSantis, who is expected to sign it into law.