Neal Adams, the veteran comic book artist best known for his iconic runs and creations for DC Comics, has passed away at the age of 80. 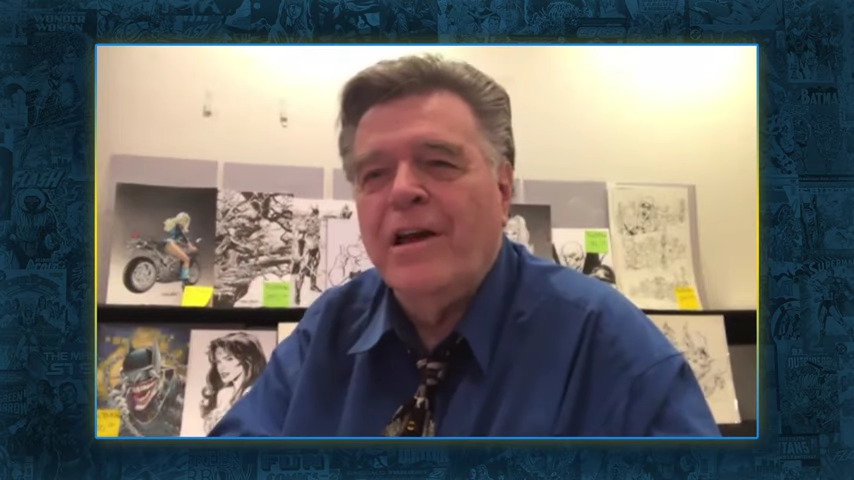 As told to The Hollywood Reporter by Adams’ wife, Marilyn, the artist died on April 28th following complications resulting from sepsis, a life-threatening medical condition wherein one’s body begins to damage itself in an effort to beat a given infection.

Information regarding the specific infection that prompted Adams’ sepsis was not provided by his family. 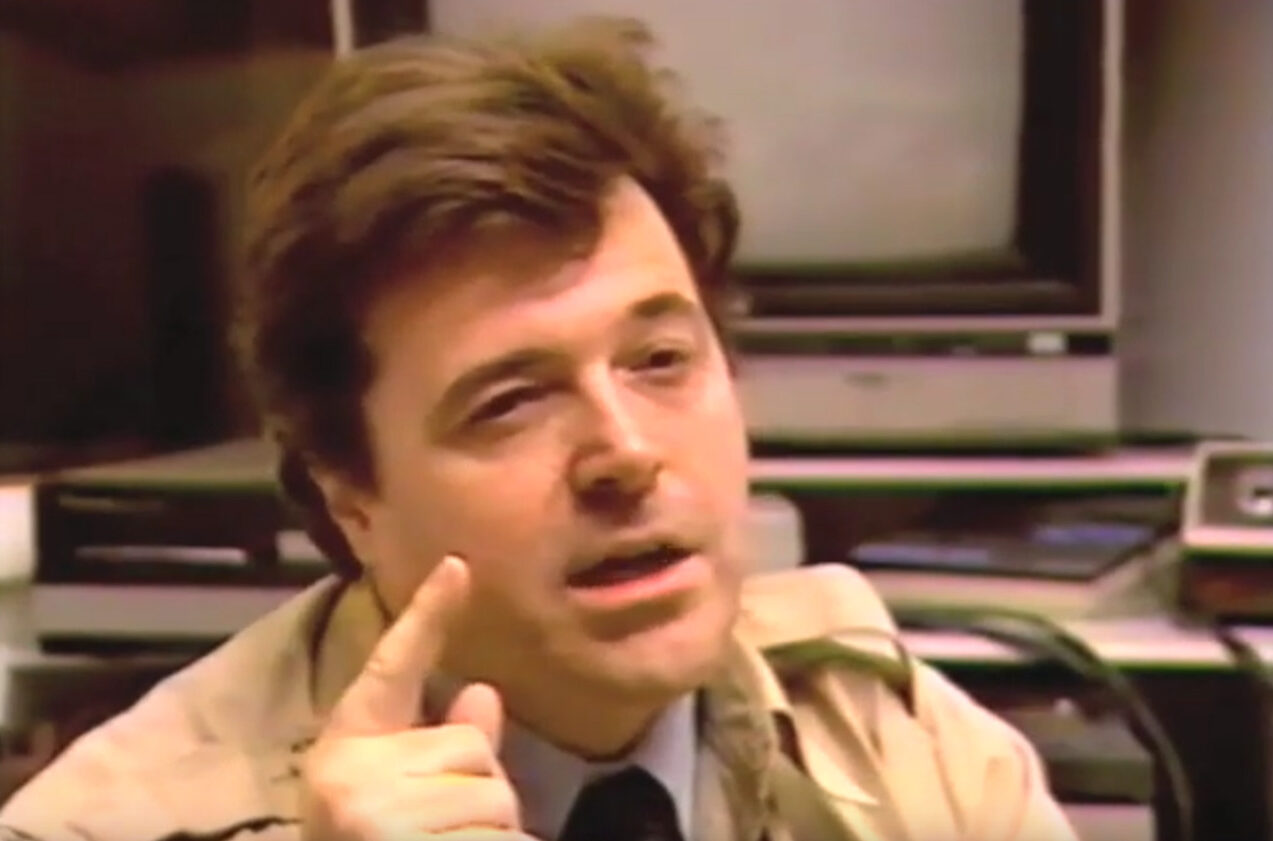 In a separate statement provided to THR, Adams’ son Josh Adams asserted, “It wasn’t until I sat at tables at conventions next to the same people I would watch treat my father with such reverence that I understood: He was their father, too.”

“Neal Adams’ most undeniable quality was the one I had known about him my entire life: He was a father,” he continued. “Not just my father, but a father to all that would get to know him.” 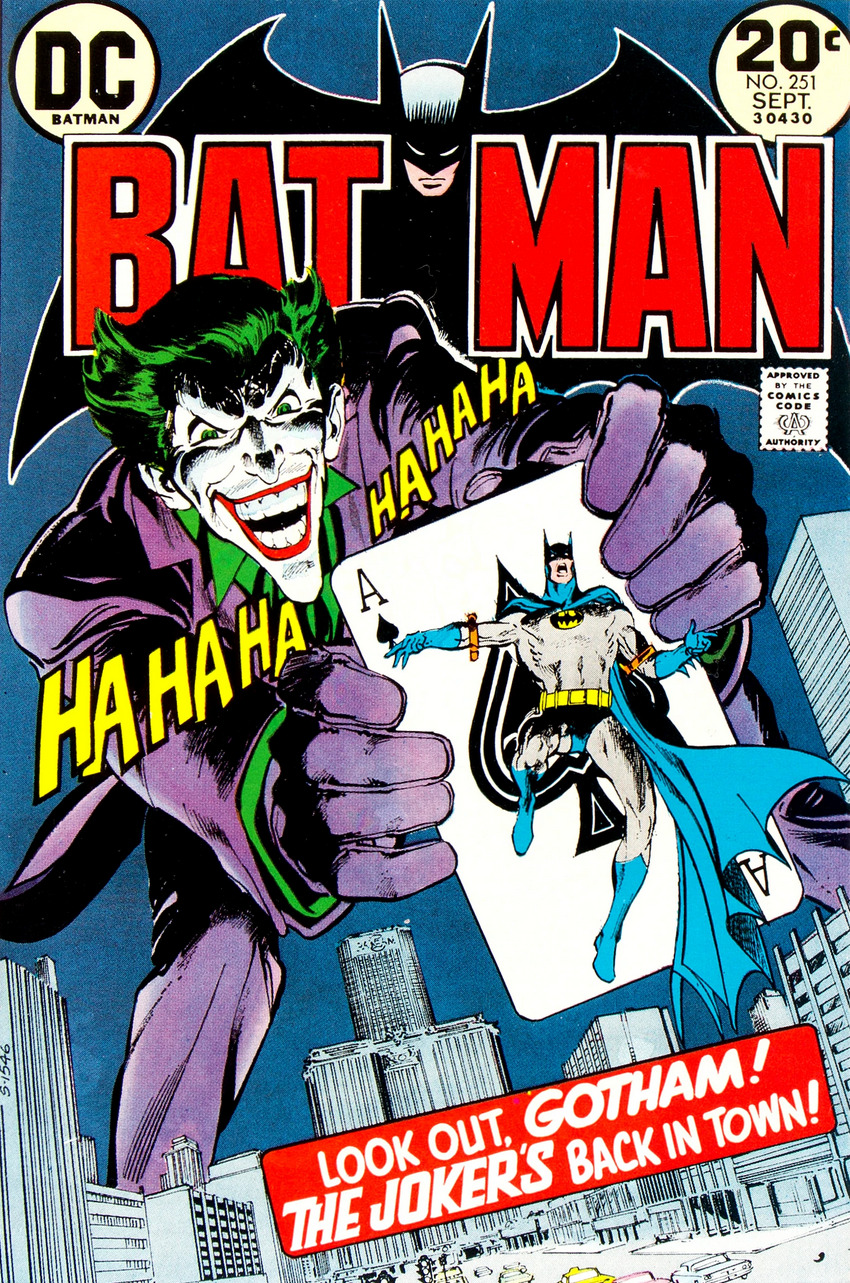 Josh further reflected, “My father was a force. His career was defined by unparalleled artistic talent and an unwavering character that drove him to constantly fight for his peers and those in need. He would become known in the comics industry as one of the most influential creators of all time and champion social and creators’ rights.”

“When he saw a problem, he wouldn’t hesitate,” he concluded. “What would become tales told and retold of the fights he fought were born out of my father simply seeing something wrong as he walked through the halls of Marvel or DC and deciding to do something about it right then and there.” 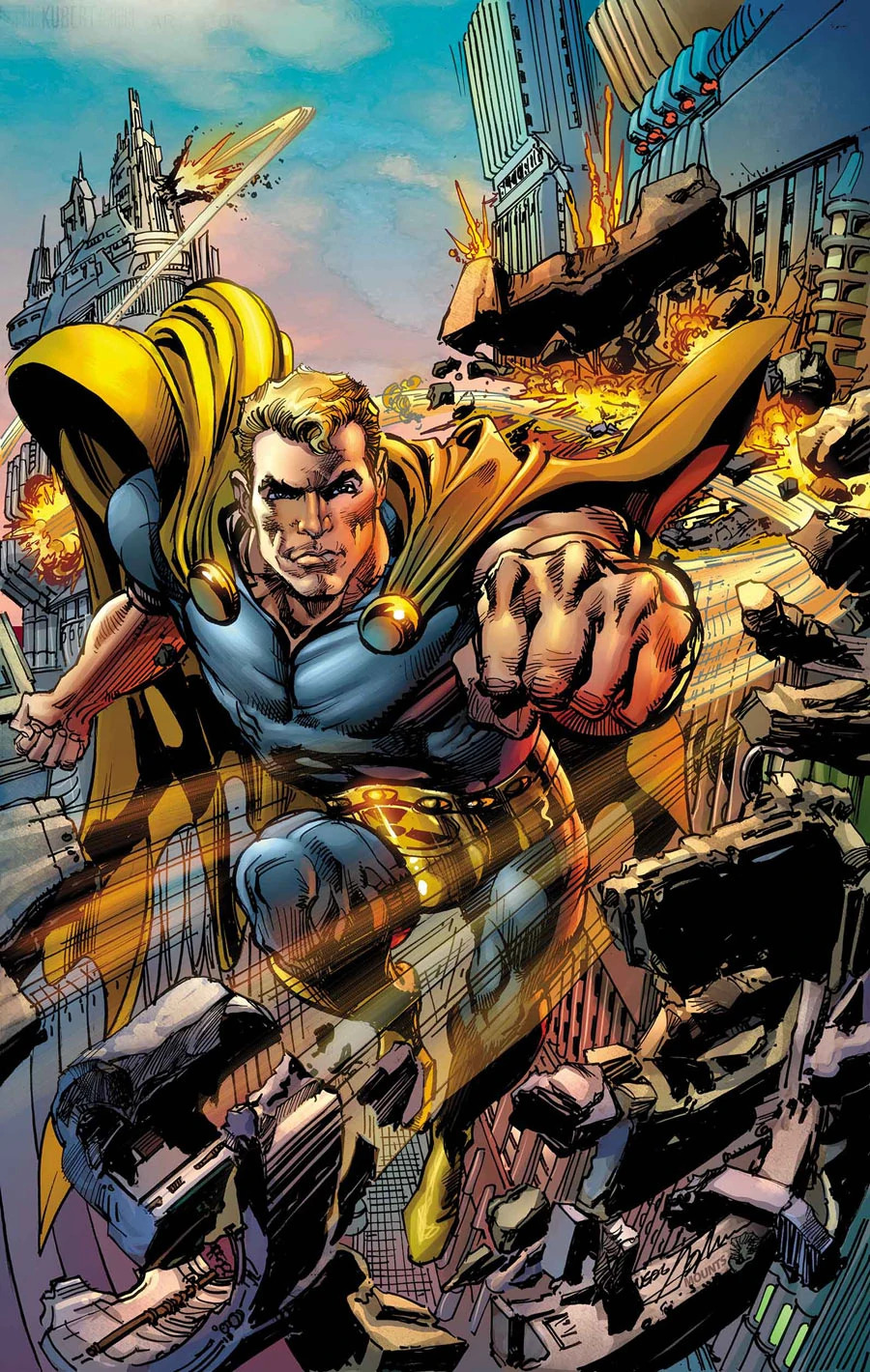 Born in 1941, Adams would get his start in comics in 1959 following his graduation from the School of Industrial Art High School, landing at Archie Comics following an unsuccessful bid to work for DC as a freelancer.

Eventually, Adams would depart Archie for the funny pages, teaming up with writer Jerry Capp in 1962 to serialize a daily newspaper comic strip based on the popular then-airing medical drama Ben Casey. 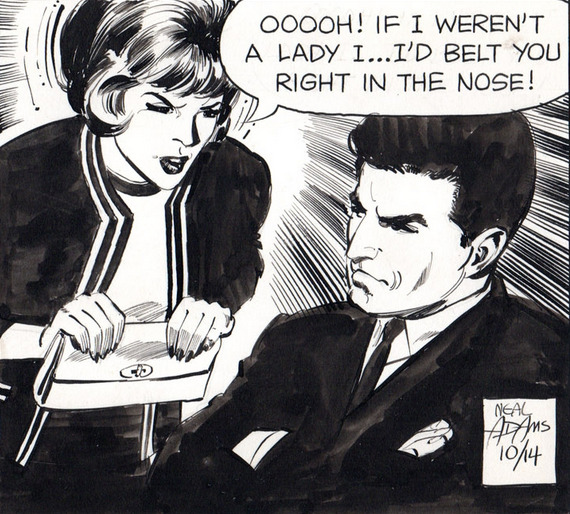 RELATED: Image Comics Founder Erik Larsen Says “The Original Sin At Marvel And DC Was Making Every Character Straight And White,” Argues Against Changing Established Characters As A Fix

Following the end of the Ben Casey show and strip in 1966, Adams would proceed to bounce around the industry, undertaking such jobs as ghost illustrating classic newspaper strips like Peter Scratch and The Heart of Juliet Jones.

However, 1967 would be a revolutionary year for both Adams and the comic book medium itself.

That year, Adams would finally receive a proper shot at working for DC, being hired by the publisher to illustrate the Howard Liss story ‘It’s My Turn To Die’ for the 182nd issue of the Our Army at War anthology series.

Soon after, he was given his first pair of superhero-related art assignments, finding himself commissioned to provide the cover art for both Action Comics Vol. 1 #356 and Superman’s Girlfriend, Lois Lane Vol. 1 #79. 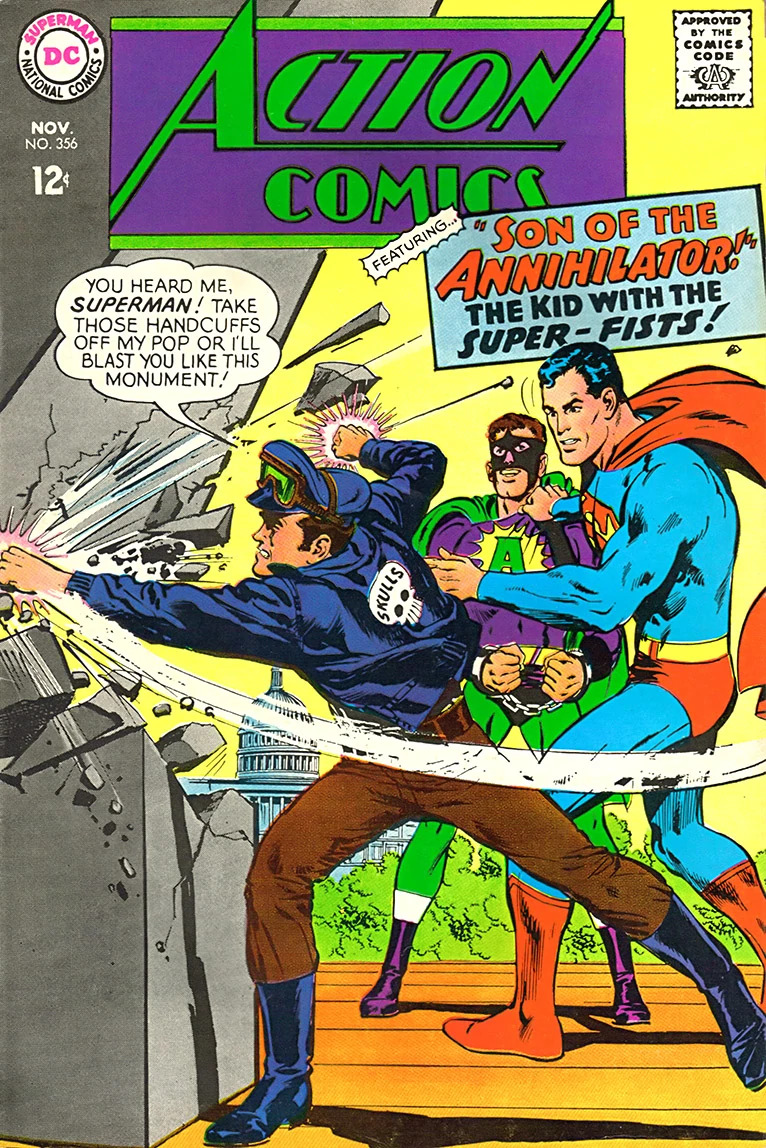 1967 also saw Adams illustrate his first Deadman story, ‘An Eye for an Eye’ in Strange Adventures Vol. 1 #207, succeeding creator Carmine Infantino as the character’s primary artist and taking his first step towards his own eventual and widely-lauded defining run of the character. 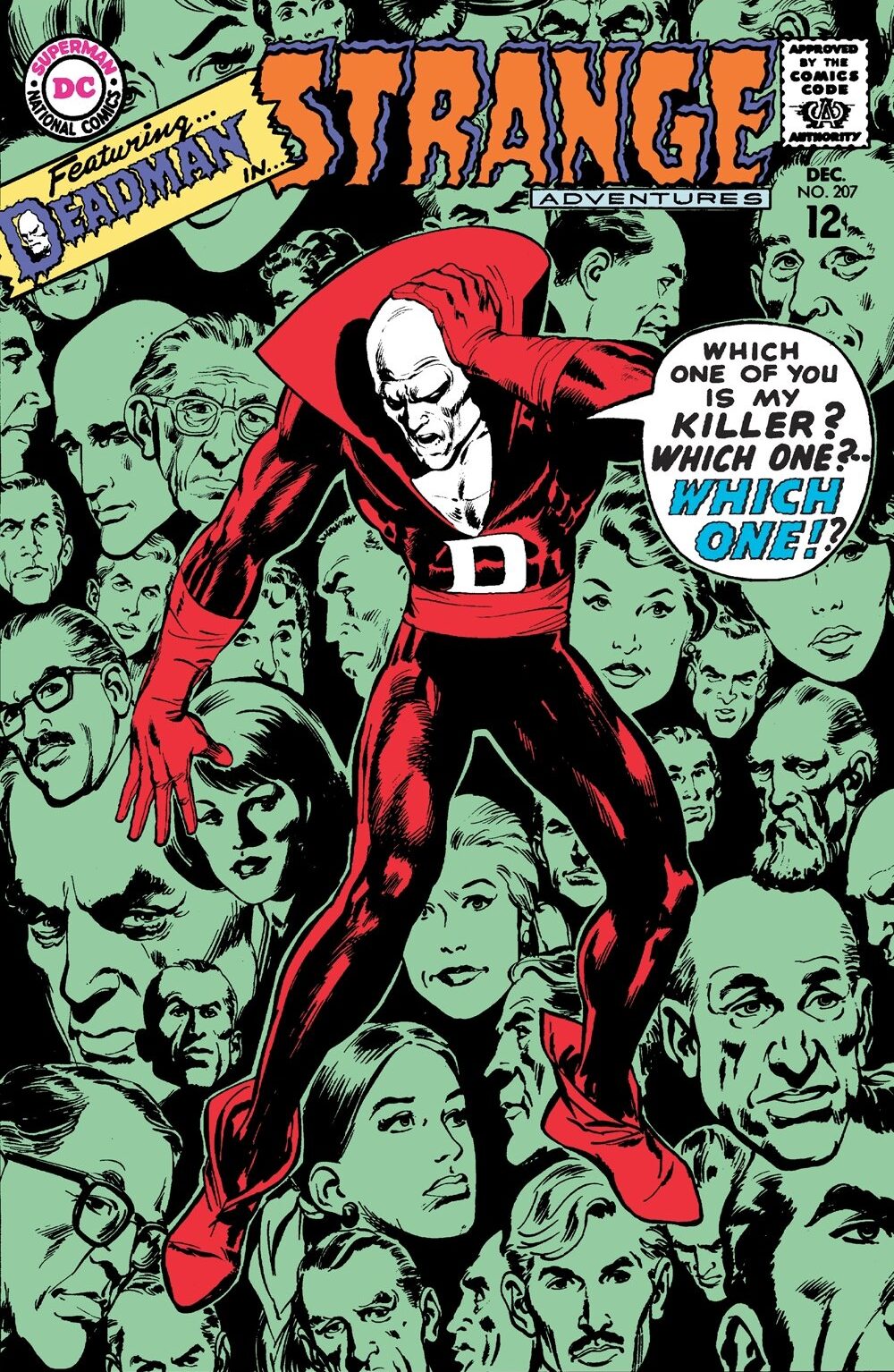 Then, at the dawn of 1968, Adams would produce his first official illustration of two characters that he would come to be known for revitalizing, illustrating a team-up cover featuring Batman and The Spectre for The Brave and The Bold Vol. 1 #75. 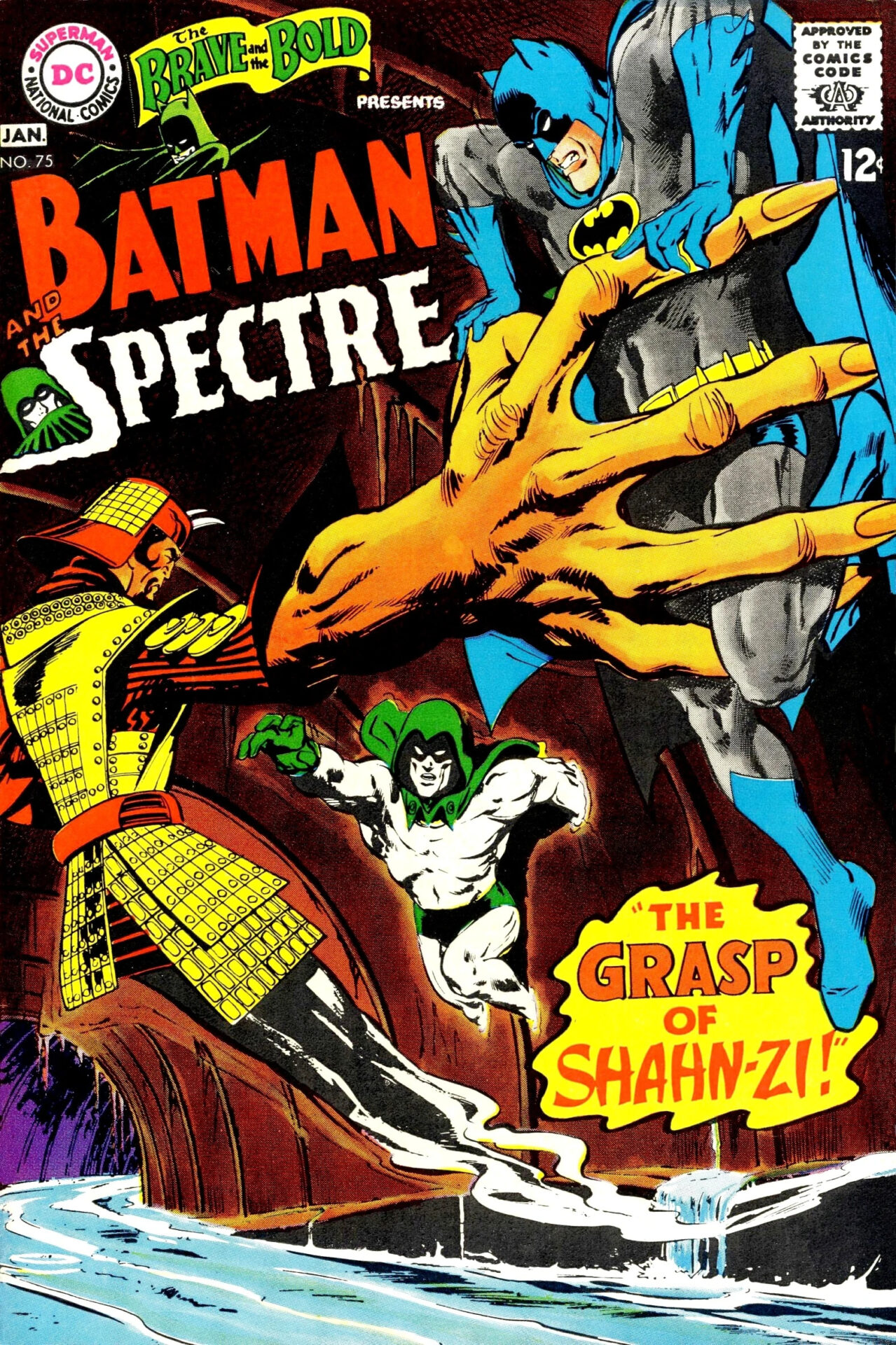 Yet, Adams would not be relegated to simply working for one of the Big Two, and in 1969 the artist began simultaneously freelancing for Marvel Comics.

Though brief, his time with the competition saw him providing interior art for nine issues of Roy Thomas and Dennis O’Neil’s run on X-Men, working alongside the latter to revive Professor X following the mutant leader’s death at the hands of the villain Grotesk, as well as three issues of The Avengers’ Kree-Skrull War tie-in issues. 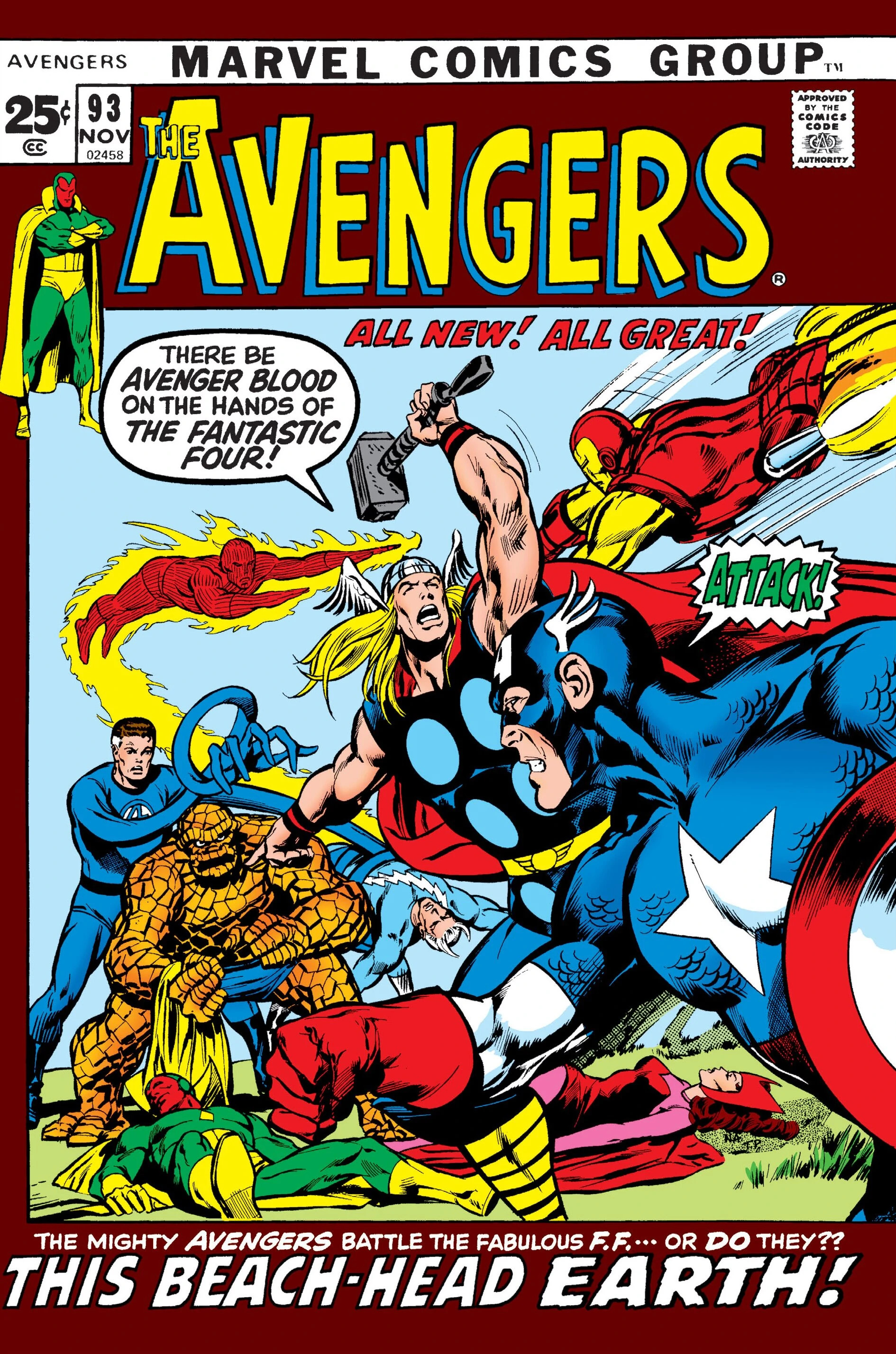 Continuing at DC, Adams would reunite with O’Neil in 1969, collaborating with his former X-Men partner to produce his first proper Batman story, ‘The Secret of the Waiting Graves,’ for Detective Comics Vol. 1 #395.

Beginning with this story, Adams would go on to become one of the Caped Crusader’s most influential creators, redefining the character from the more camp detective of the Golden and Silver Ages into the more brooding and gothic one known today. 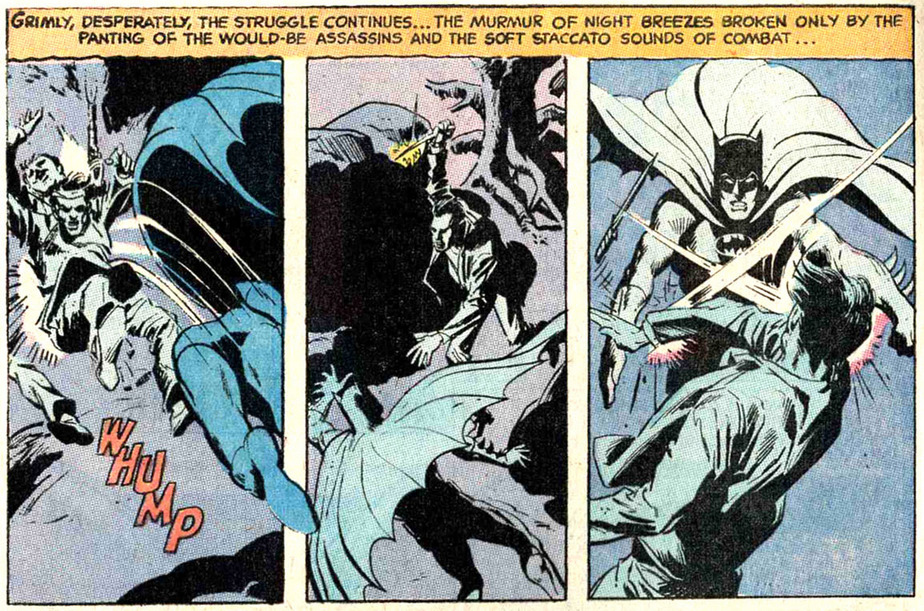 Further, Adams would also be responsible for injecting new life into Batman’s rogues gallery, both through the creation of such iconic foes as Man-Bat and Ra’s al Ghul and the revitalization of others, including Two-Face and the Joker. 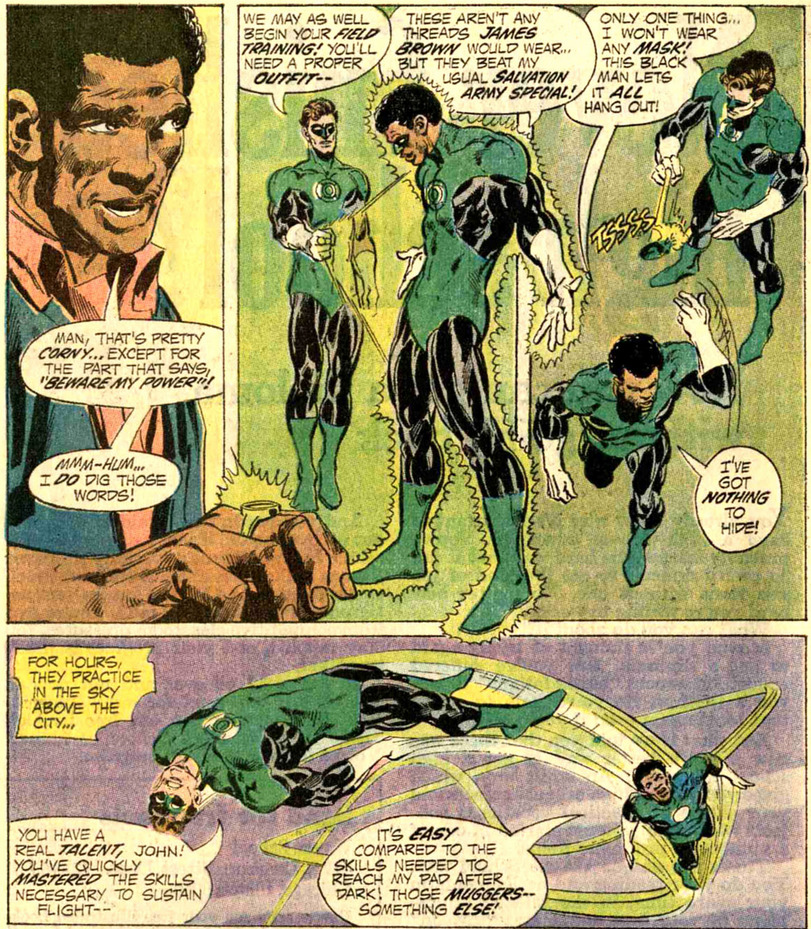 At the same time he was working to bring a new feel to the Dark Knight, Adams would also collaborate with O’Neil on perhaps the most iconic run of his career, reformatting Green Lantern’s then-solo book into a social commentary-heavy team-up feature starring both the Emerald Knight and the Green Arrow – a run which most notably featured the infamous issue wherein the latter discovers his sidekick, Speedy, is addicted to heroin. 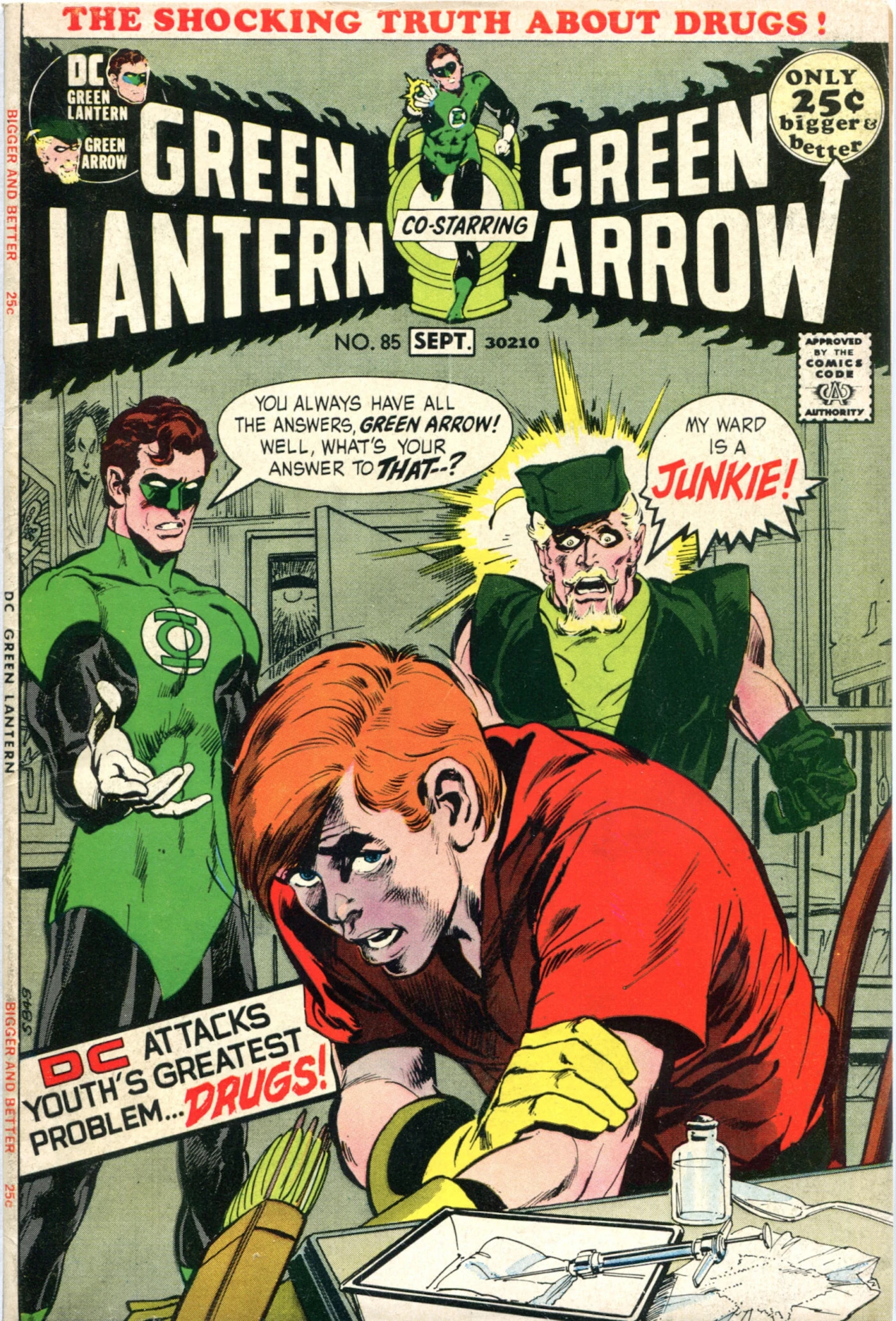 After this run, Adams would scale back his DC Comics work, with his final works for the company – outside of sporadic returns for various specials and his 2010 miniseries Batman: Odyssey – being interior art cleanups for the first DC-Marvel intracompany crossover, Superman vs. the Amazing Spider-Man, and the pencils for Superman vs. Muhammad Ali. 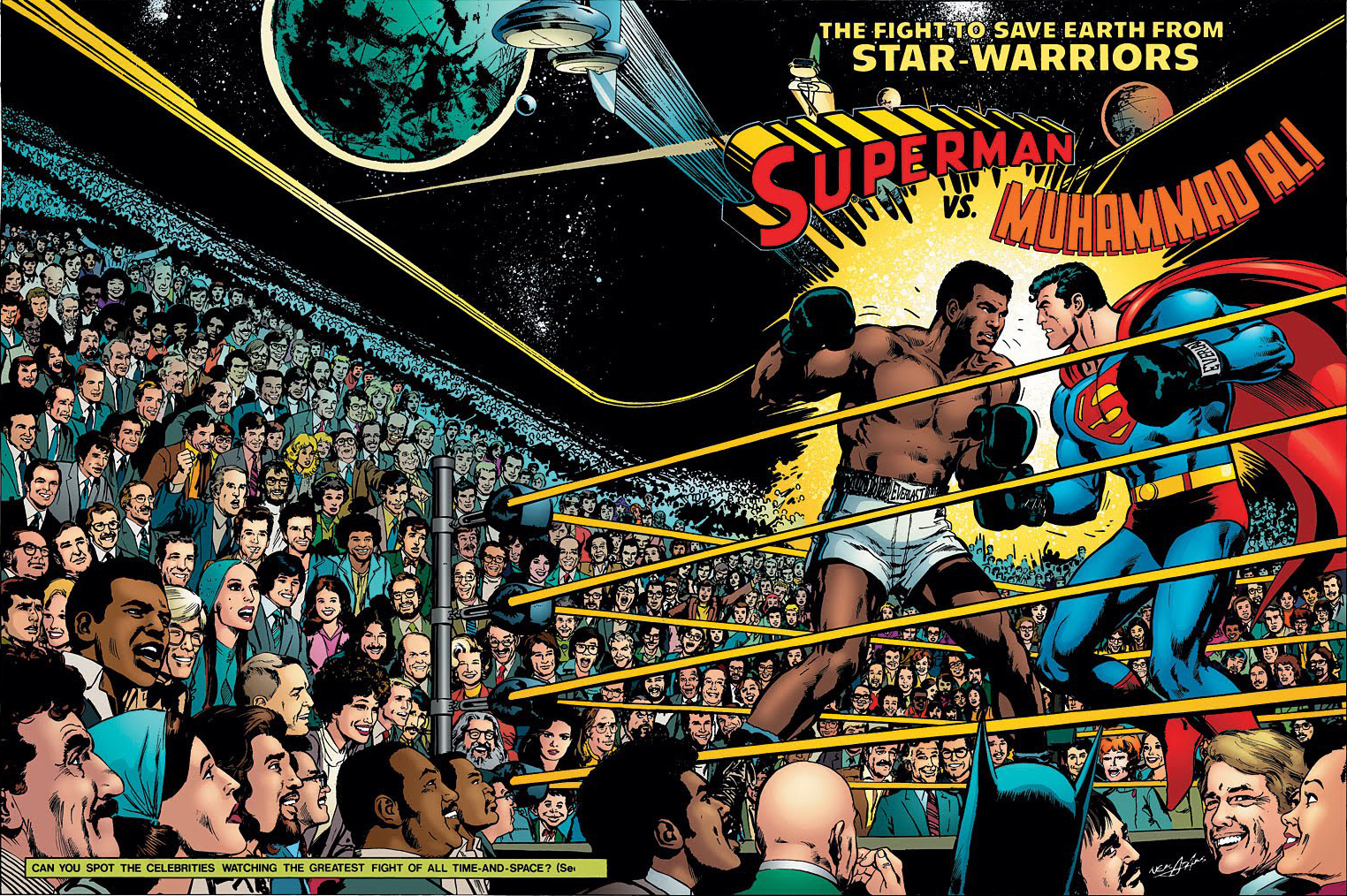 Outside of his comic production work, Adams was also highly influential in the fight for comic creators’ rights, with one of his most famed accomplishments being a successful lobbying effort to have DC Comics properly credit and pay Superman creators Jerry Siegel and Joe Shuster for their creation. To this end, he was also a founding member of the Comics Creators Guild.

Unsurprising in light of his years in the industry, he was also the recipient of numerous honors throughout his career, including a pair of Shazam Awards for his Green Lantern/Green Arrow work and induction into the Will Eisner, Harvey Awards’ and Inkwell Awards’ respective Halls of Fame. 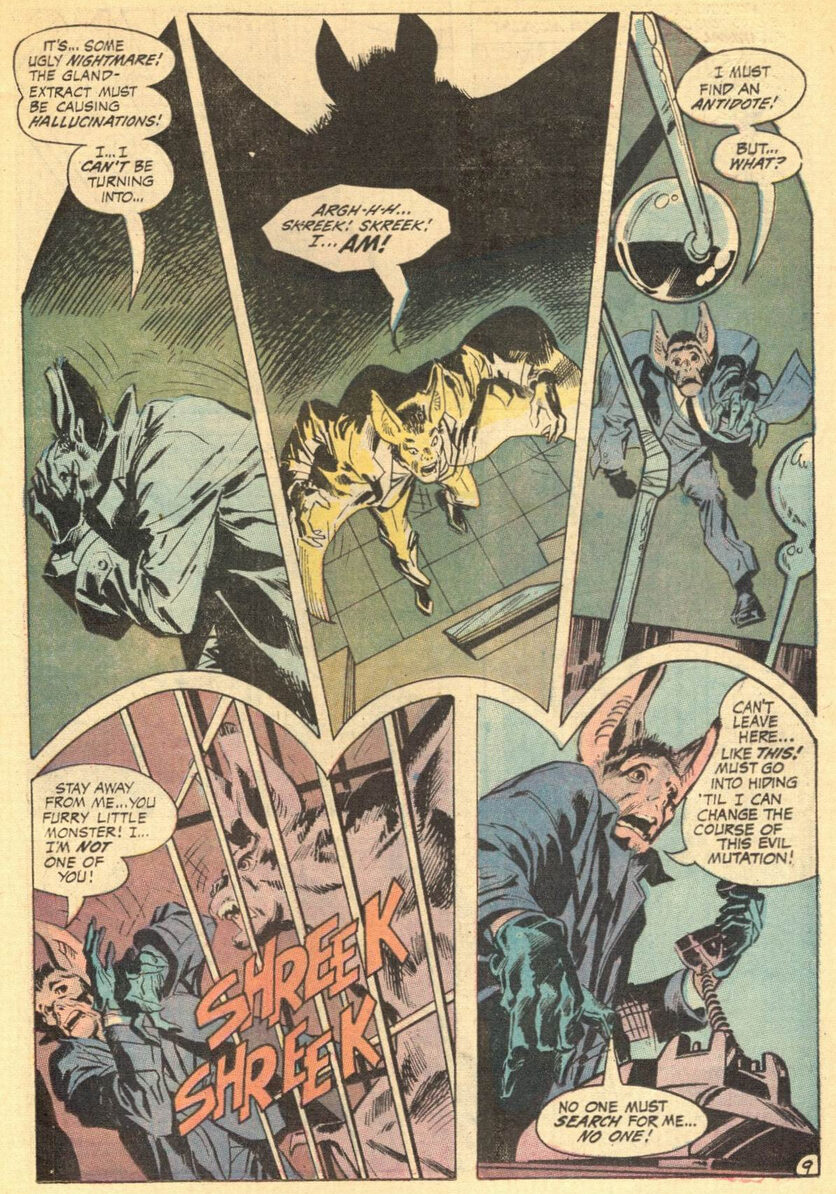 What do you make of Adams’ passing? Let us know your thoughts on social media or in the comments down below!