Woke celebrities have opportunistically taken to social media to weigh in on the horrific Texas school shooting earlier this week, politicising the tragedy by pushing for gun control and urging voters to elect Democrat candidates.

On Tuesday an 18-year-old man, identified as Salvador Ramos, entered Robb Elementary in Uvalde, Texas, carrying an AR-15 rifle, killing 19 children, two faculty members, and injuring 17 people before he was reportedly shot and killed by an agent of the Border Patrol Tactical Unit. 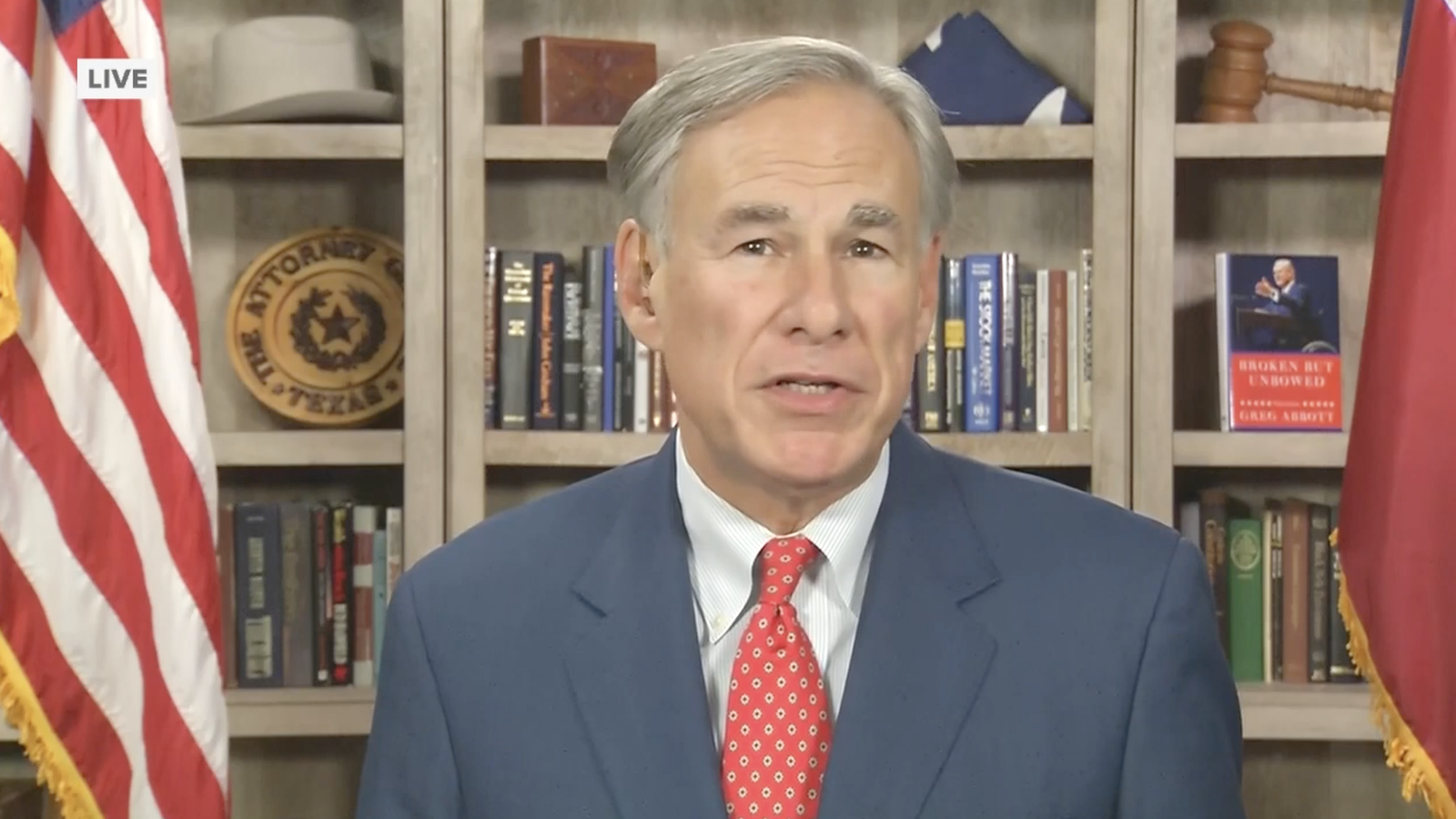 Texas Governor Greg Abbot (R) issued a statement later that day, stating, “Texans across the state are grieving for the victims of this senseless crime and for the community of Uvalde. Cecilia and I mourn this horrific loss and we urge all Texans to come together to show our unwavering support to all who are suffering.”

“We thank the courageous first responders who worked to finally secure Robb Elementary School. I have instructed the Texas Department of Public Safety and the Texas Rangers to work with local law enforcement to fully investigate this crime. The Texas Division of Emergency Management is charged with providing local officials all resources necessary to respond to this tragedy as the State of Texas works to ensure the community has what it needs to heal.” Governor Abbott’s statement concluded.

Gov. Abbott would go on to hold a lengthy press conference wherein more details about the gunman and the mass murder were disclosed to the media.

As revealed by the information provided by the Texas Governor, Ramos was “a high school dropout” with reportedly “no criminal history identified yet,” noting that the gunman “may have had a juvenile record,” and stating that “there was no known mental health history” of the shooter.

Abbott declared he had discussions with Uvalde community leaders, sheriff, and mayor Don McLaughlin, coming to the conclusion that “we have a problem with mental health, illness, in this community,” and touched on the challenges the community is facing.

“I want to make sure everybody understands the mental health services that are available at this time,” the Governor went on, urging those “affected to access mental health,” including “the victims, the families, family members, friends, and the law enforcement” involved in the tragedy. 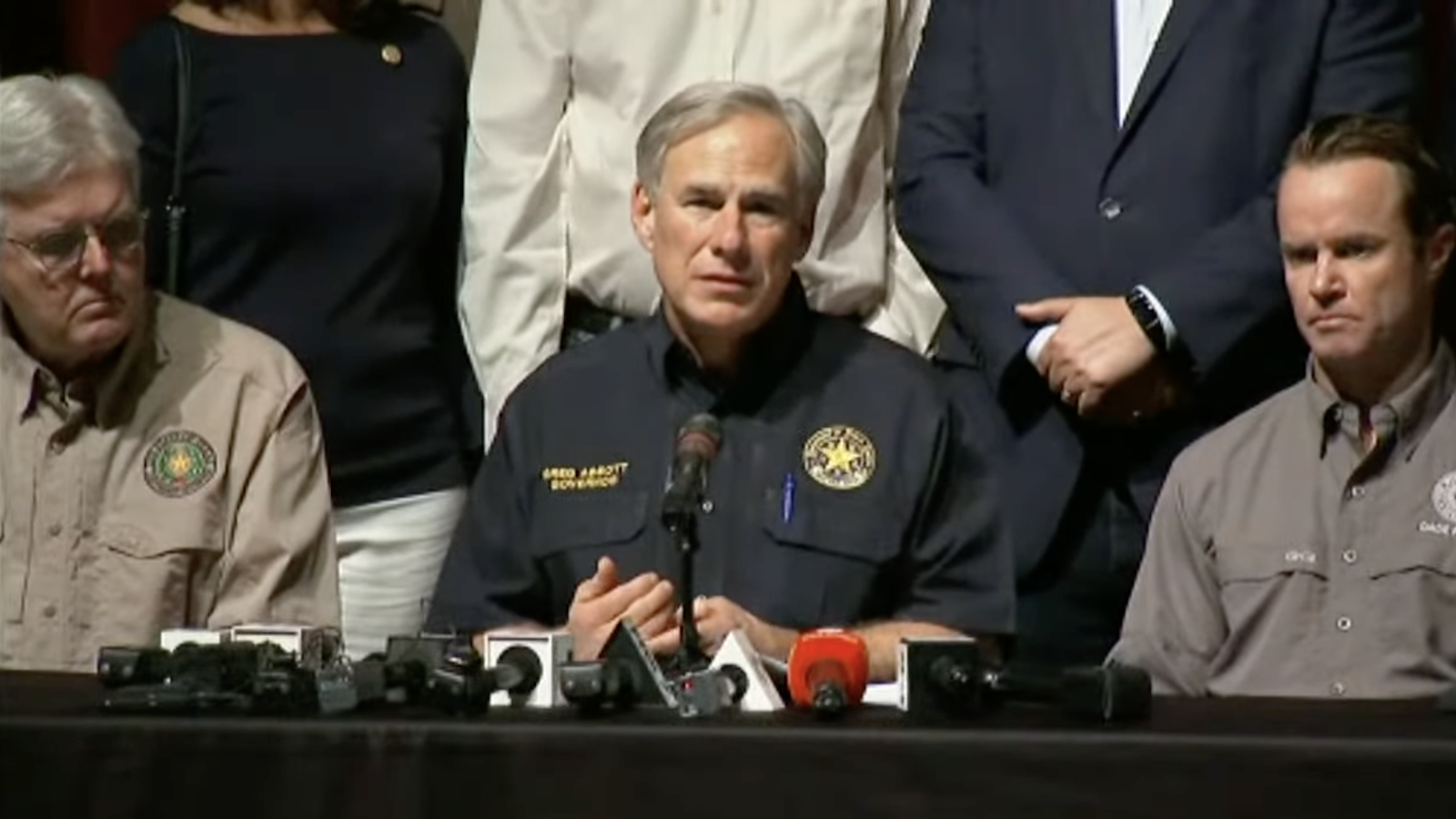 As it was to be expected, activist celebrities saw an opportunity to promote their woke politics, calling for voters to elect Democrat candidates in upcoming elections and shamelessly pushing for gun control in the aftermath of the tragedy.

Left-wing activist and actor Rob Reiner wasted no time blaming Republicans for the tragic incident, writing, “The blood of every child that dies of gun violence in this country is on the hands of the Republican Party.”

“I hope everybody goes home and hugs their guns a little tighter tonight,” read a tasteless tweet by unfunny comedian Michael Ian Black.

Pro-abortion advocate and actress, Bette Midler, shamelessly compared the tragedy to pro-life stances, asserting, “WHAT IN GOD’S NAME ARE WE DOING? THIS HAS GOT TO CHANGE!”

“THIS NATION IS FULL OF PEOPLE WHO CANNOT CONTROL THEIR WORST IMPULSES AND THE INNOCENT ALWAYS PAY THE PRICE! DON’T SAVE FETUSES ONLY TO HAVE THEM DIE AT SCHOOL BECAUSE YOU LOVE YOUR GUNS MORE THAN LIFE! FOR SHAME!” 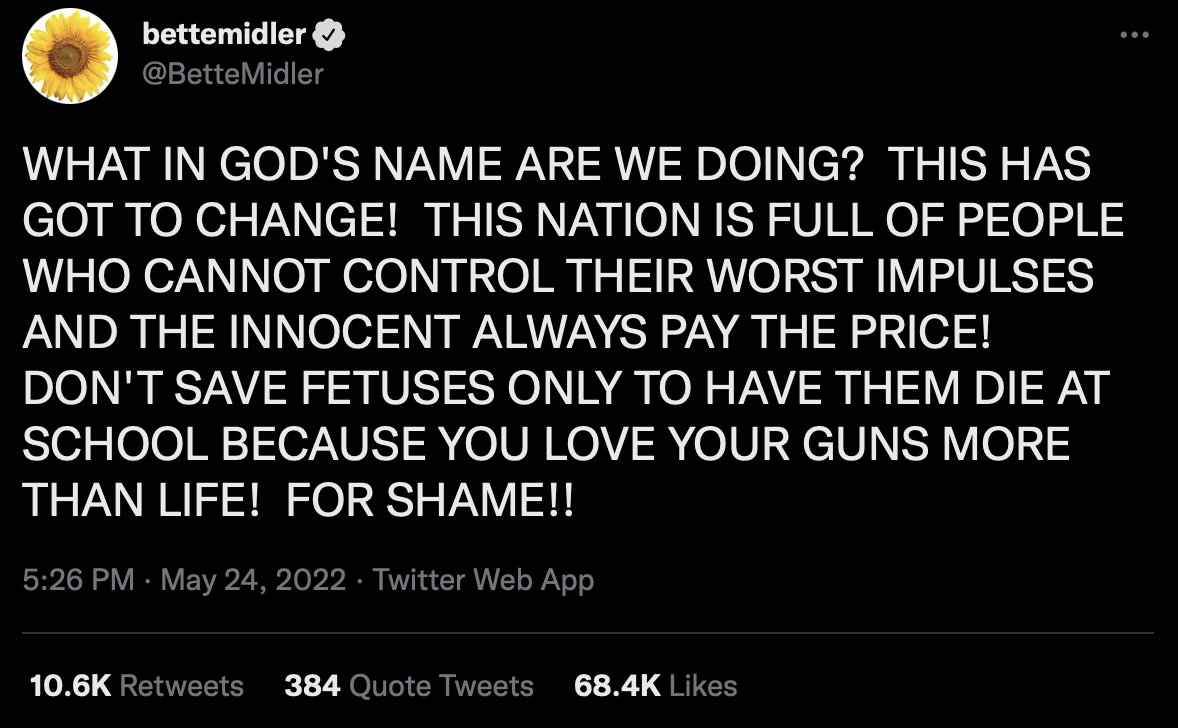 “Matty whispering into the ear of a 6 year old as they bleed out, then turning to the parents of their just slaughtered child,” wrote Arrested Development actor David Cross in response to a post shared by editor-at-large at Grid Matthew Yglesias.

Yglesias’ progressive, albeit unsuitable, tweet in question read, “For all its very real problems, one shouldn’t lose sight of the fact that the contemporary United States of America is one of the best places to live in all of human history and there’s a reason tons of people of all kinds from all around the world clamor to move here.” 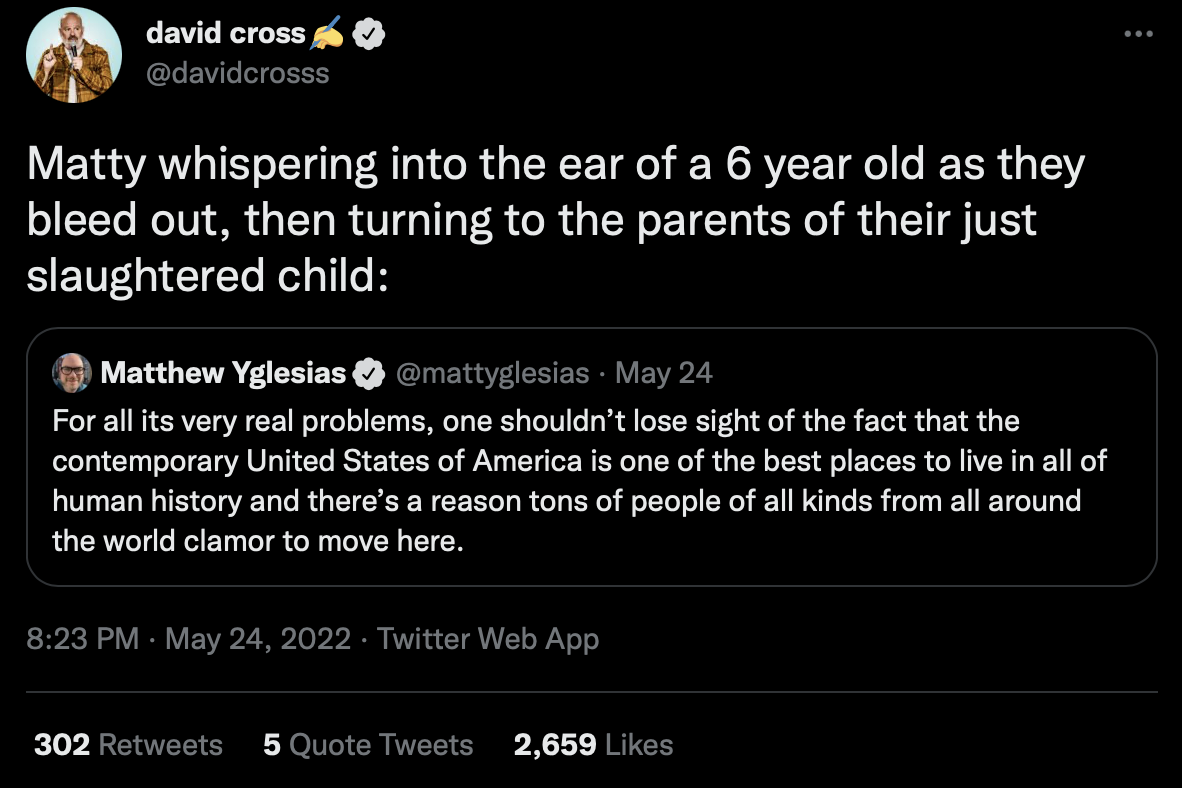 The Batman actor Jeffrey Wright asserted,  “Our country is sick. Sick people protecting their fears & funs or political power above the children of others. We won’t get well until we admit it.”

“Still waiting for that story about when an AR-15 in civilian hands was beneficial to the common good,” wrote Wright shortly after.

Beauty and the Beast actor Josh Gad asserted, “We as a nation care more about celebs fighting in court than children dying in classrooms. And to everyone who claims to be pro life, where is your compassion for the children who die every f—king week in this nation by the military grade guns you cherish?” 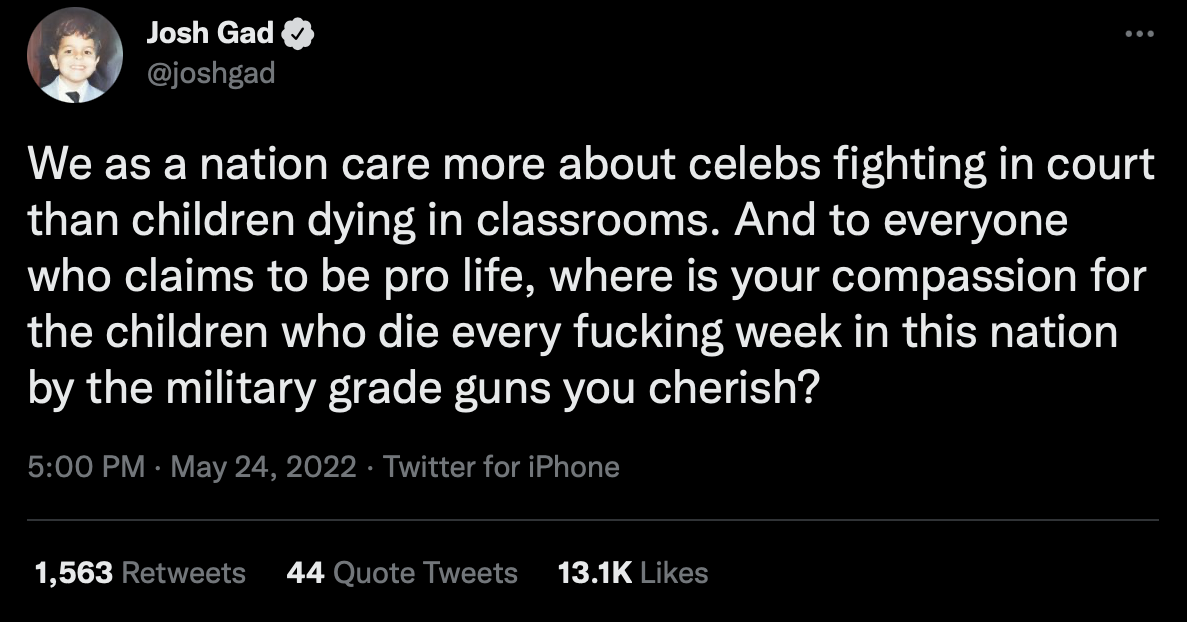 Outspoken activist and actress Rosanna Arquette wasted no time shifting blame on Republicans, taking to social media to share a series of tweets (still ongoing) that make evident her lack of understanding of the situation.

“Another shooting in a school in Texas where 2 children were killed. And we will not forget Buffalo. Gun violence is a[sic] epidemic in America it’s disgusting and cruel that the GOP won’t do anything to change this sick violent trend vote these monsters out and get gun safety now.” 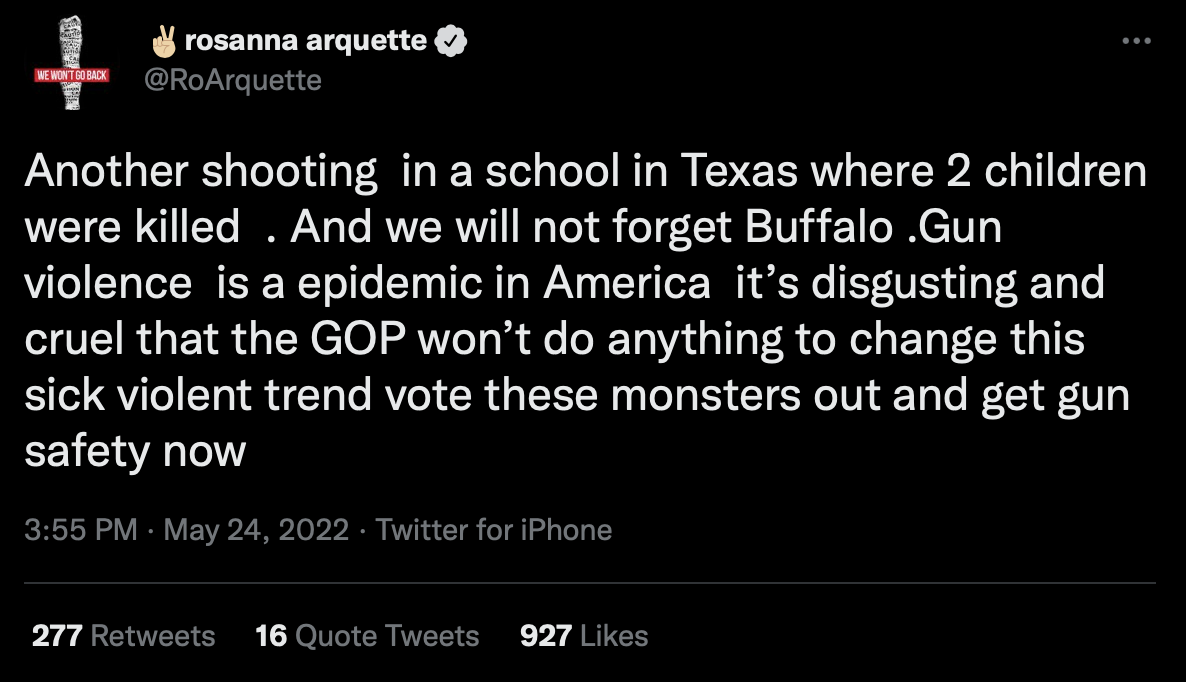 “Evil Racist Gun Shooting Retrumplikkans who claim to love the lives of children when in fact they COULDN’T CARE Less,” the woke actress wrote in a follow-up tweet.

“Remember this …Retrumplikkkans do not give a s—t about life they only care about control . vote them all out because our lives depend on it,” Arquette added.

Making yet another uneducated assumption, the actress went on, writing, “So many Kids in America are also committing suicide from the sickening ,Racistanti Lgbtq Bullying .the stress ,pressure and deep Fear assault on their minds everyday.”

“This is ENOUGH. It’s effecting[sic] their mental health,” she added, calling for #GunControlNow.

“The GOP is a Terrorist organization as bad as the Taliban determined to destroy democracy,” the insufferably woke actress accused, comparing, yet again, Republicans to the Taliban.

“Republicans are Evil,” Arquette further parroted. “Anyone that supports this kind of violence and thinks we need MORE guns is Truly Evil. they will not do anything to address this horrific gun violence where kids are being murdered in their schools because of their barbaric gun laws. Vote them out.” 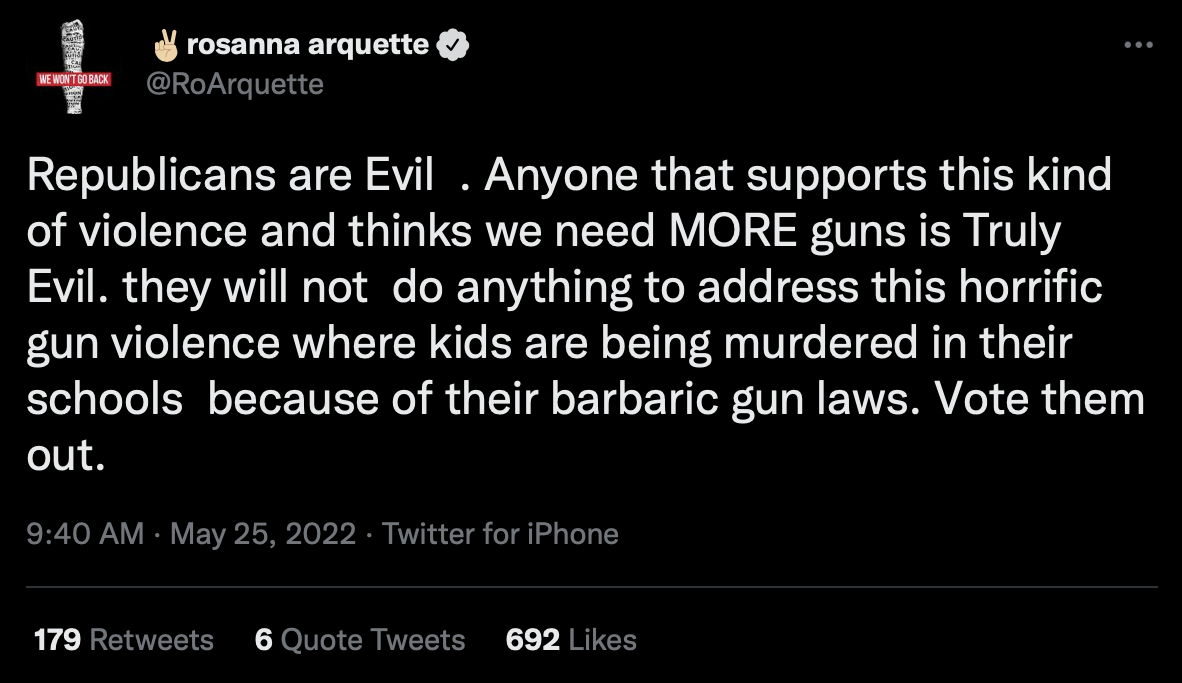 Self-proclaimed anti-racist writer and activist Tim Wise wrote, “The fact that some people are literally calling for bulletproof blankets in schools, rather than serious gun control demonstrates why this is a broken country. Too many people love their guns more than their children– or at least, other people’s children.” 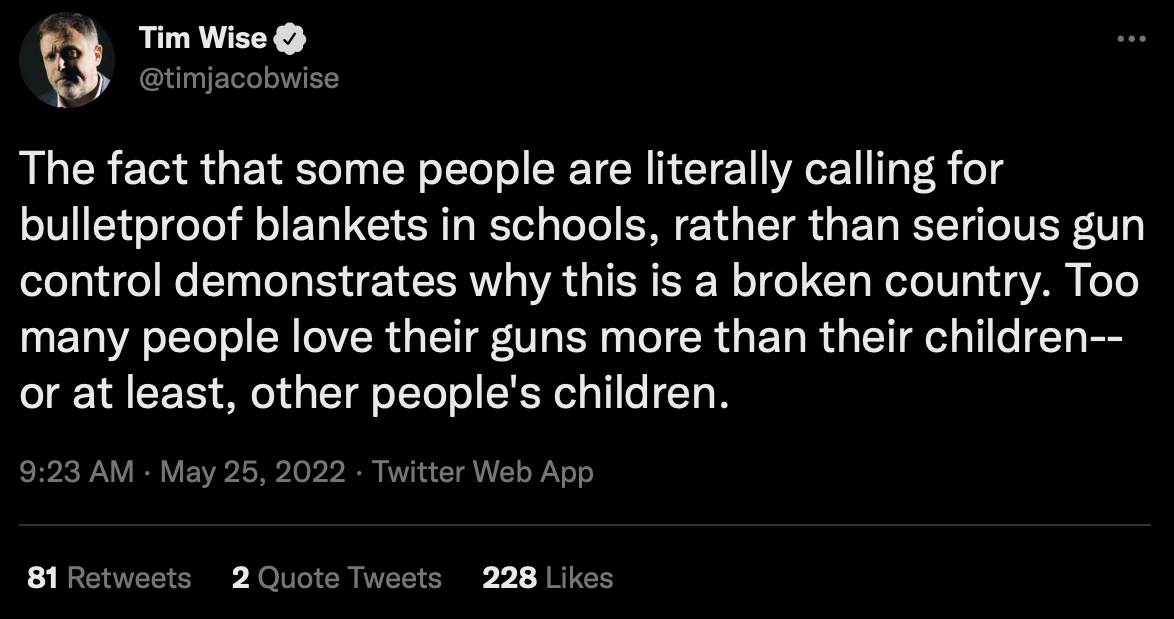 RELATED: Woke Hollywood Celebrities Are Having A Field Day After Former Minneapolis Police Officer Derek Chauvin Is Found Guilty Of Murder Over The Death Of George Floyd

“Join the movement to #EndGunViolence: Text ACT to 644-33,” she then promoted, linking to Everytown Gun Safety organisation’s campaign for gun control. 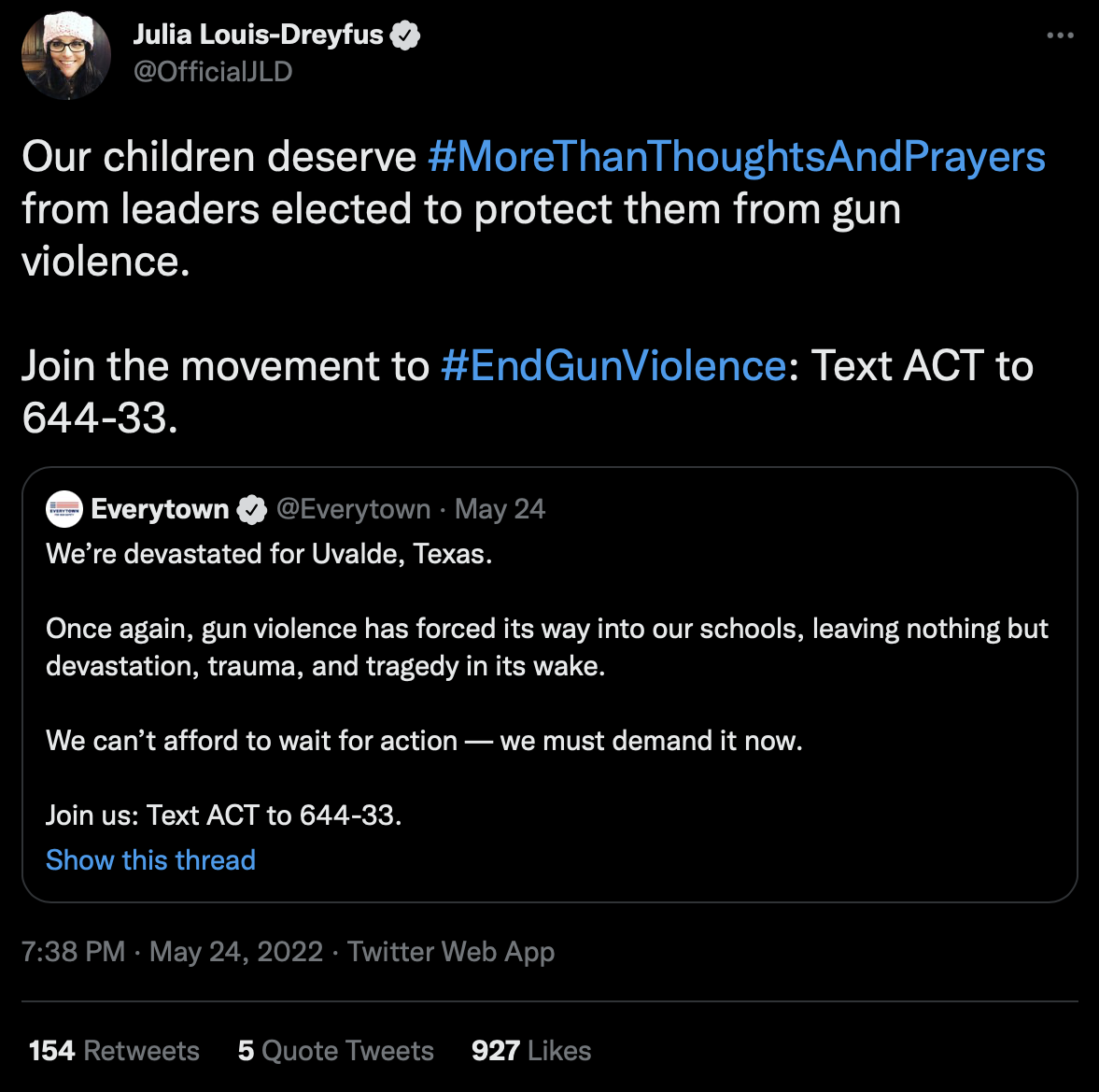 Star Trek actor George Takei pushed for donations to be made to Democrat candidates. “We all can do something, you know. We can donate to Democratic candidates who will prioritize gun control, and we can campaign and vote for them this November.”

“Do it for the kids and their future. If you sit this out, they’ll continue to die senselessly,” he added. 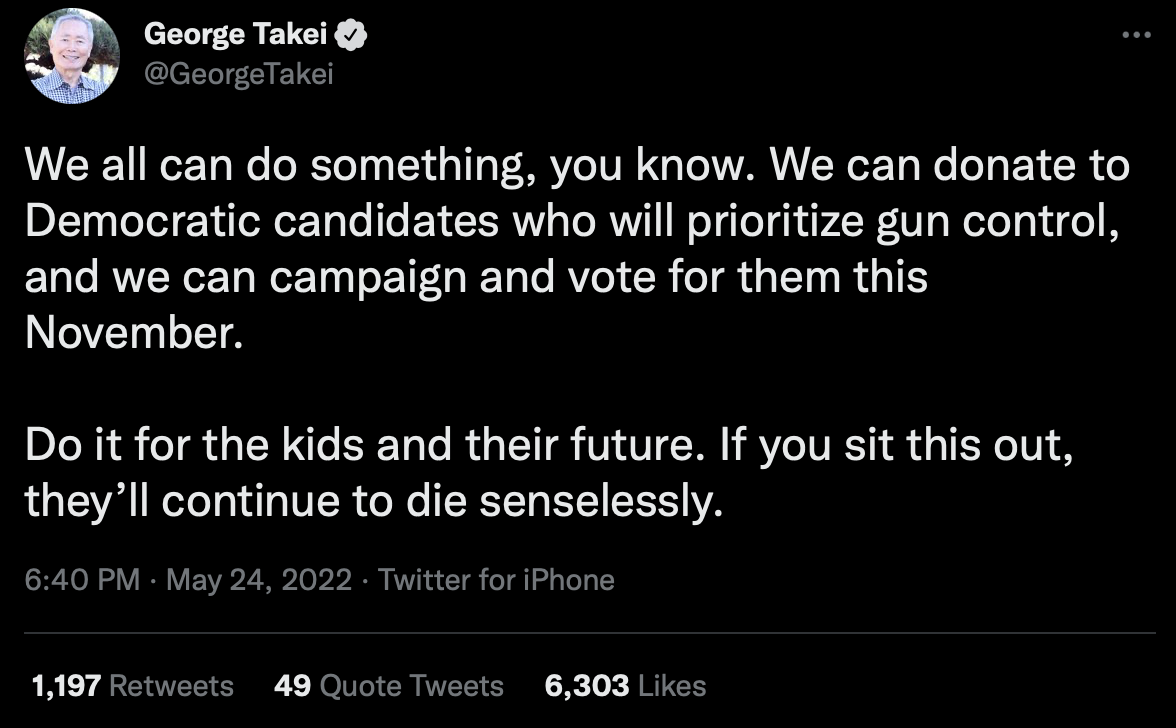 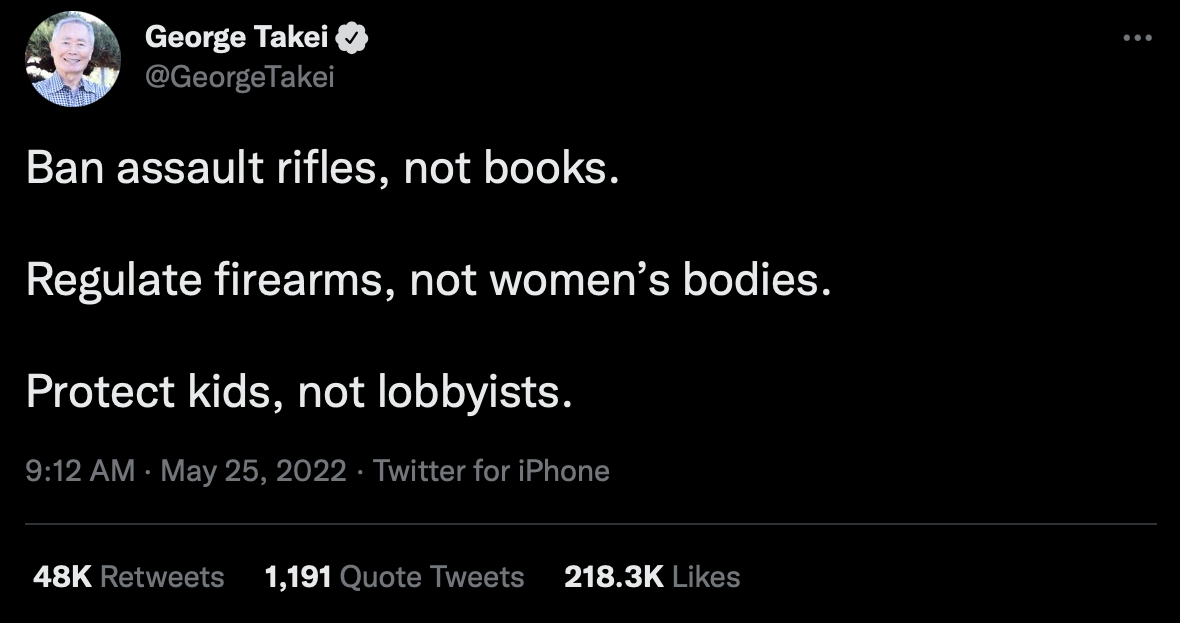 Former President of the United States and current Netflix producer Barack Obama took to social media to not only push for gun control and reform of the police, but also to memorialise the death of George Floyd; attempting to make a comparison where there is none.

“As we grieve the children of Uvalde today, we should take time to recognize that two years have passed since the murder of George Floyd under the knee of a police officer,” the former president wrote.

He added, “His killing stays with us all to this day, especially those who loved him.” 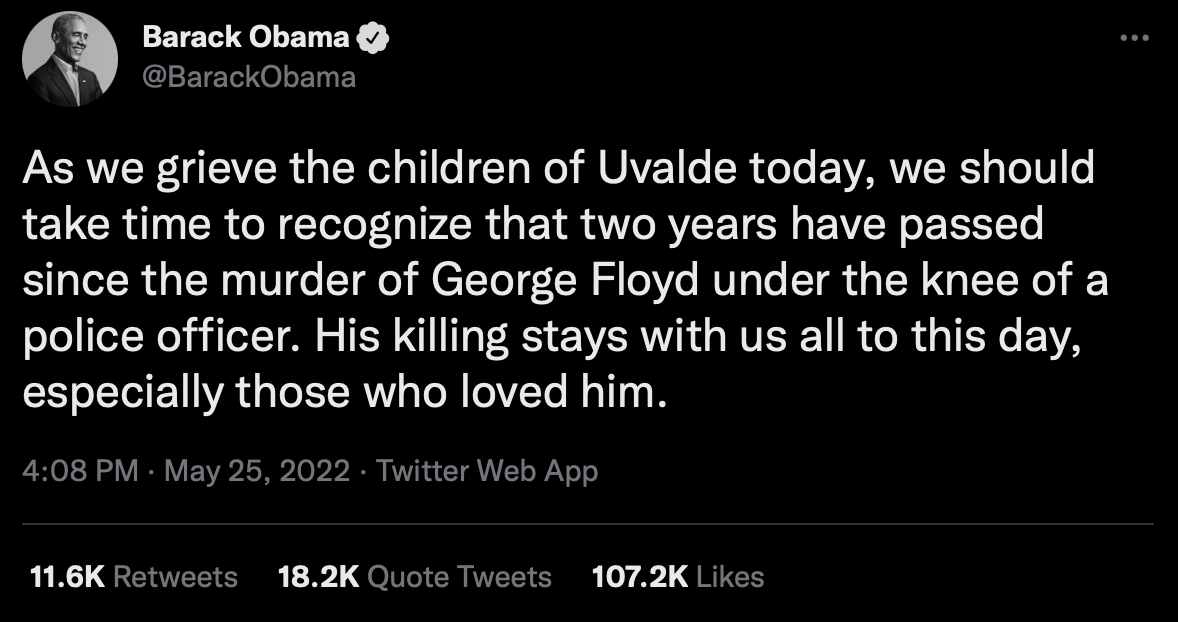 “In the aftermath of his murder, a new generation of activists rose up to channel their anguish into organized action, launching a movement to raise awareness of systemic racism and the need for criminal justice and police reform,” he added in a follow-up tweet. 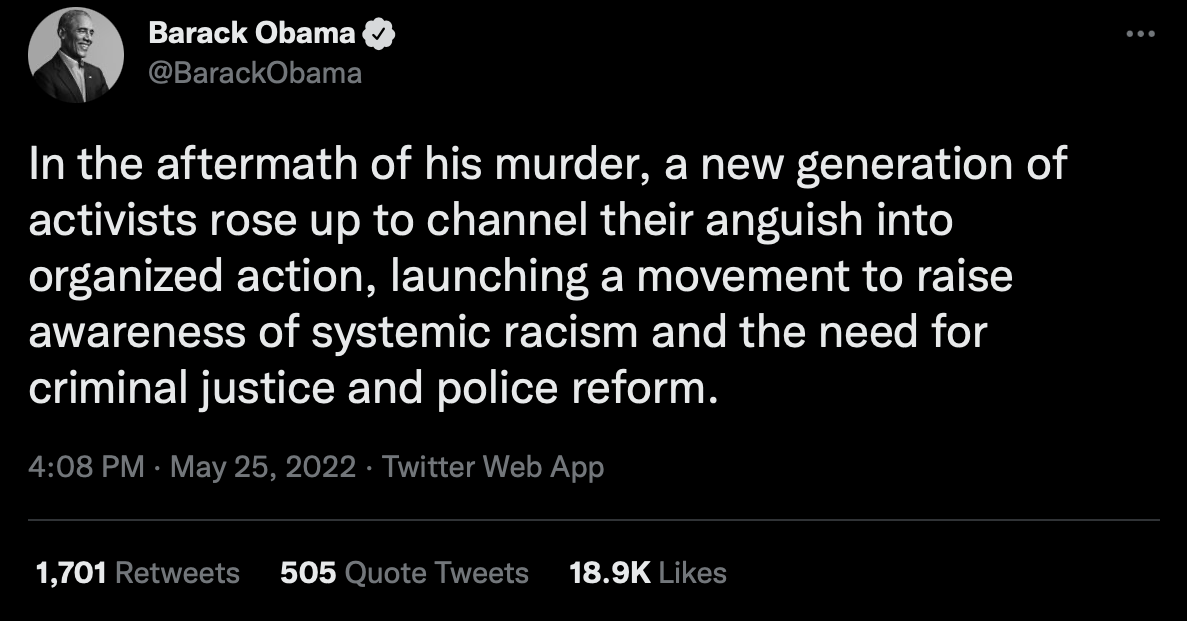 What do you make of the comments made by these woke celebrities about the Uvalde school shooting? Let us know your thoughts in the comments section down below or on social media.

NEXT: Woke Hollywood Elitists Share Their Thoughts On Kyle Rittenhouse Trial Ahead Of The Jury’s Verdict