Seventy-five-year-old thriller writer James Paterson has issued an apology after the internet outrage mob took issue with his assertion earlier this week that that older white males suffered from “another kind of racism” when it came to the publishing industry. 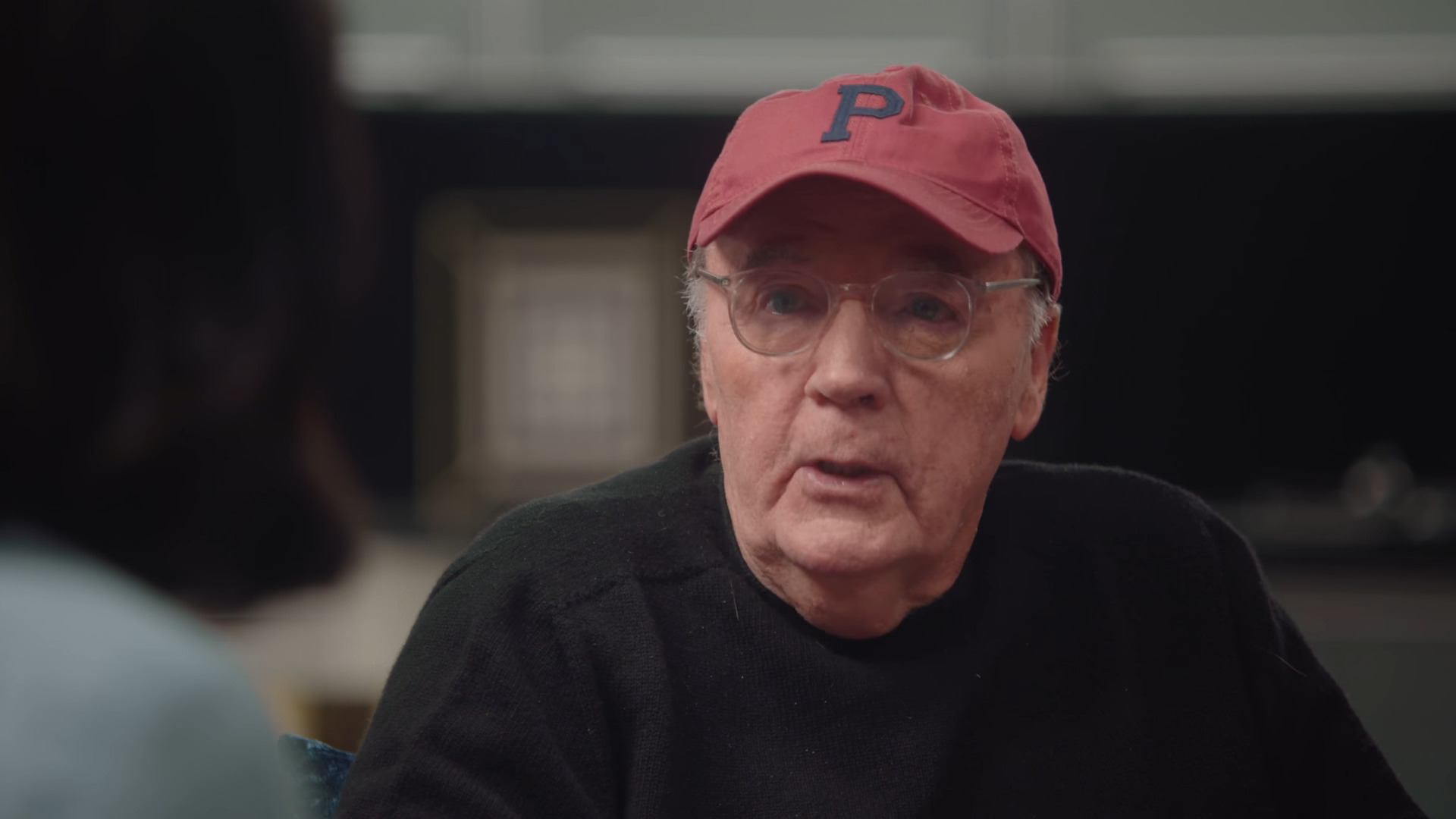 Source: Why James Patterson used to hate books, and what changed his mind | BookTube YouTube

The situation surrounding Patterson began on June 12th when UK news outlet The Sunday Times published an interview with the storied fiction author where in response to reporter Sarah Baxter’s broaching of how his early career successes as a white author were the result of stories featuring black detective Alex Cross, he explained, “I just wanted to create a character who happened to be black.”

“I would not have tried to write a serious saga about a black family,” he continued. “It’s different in a detective story because plot is so important. I get it. How could we run through that period, especially in Hollywood, where there was all this talent and nobody got hired?” 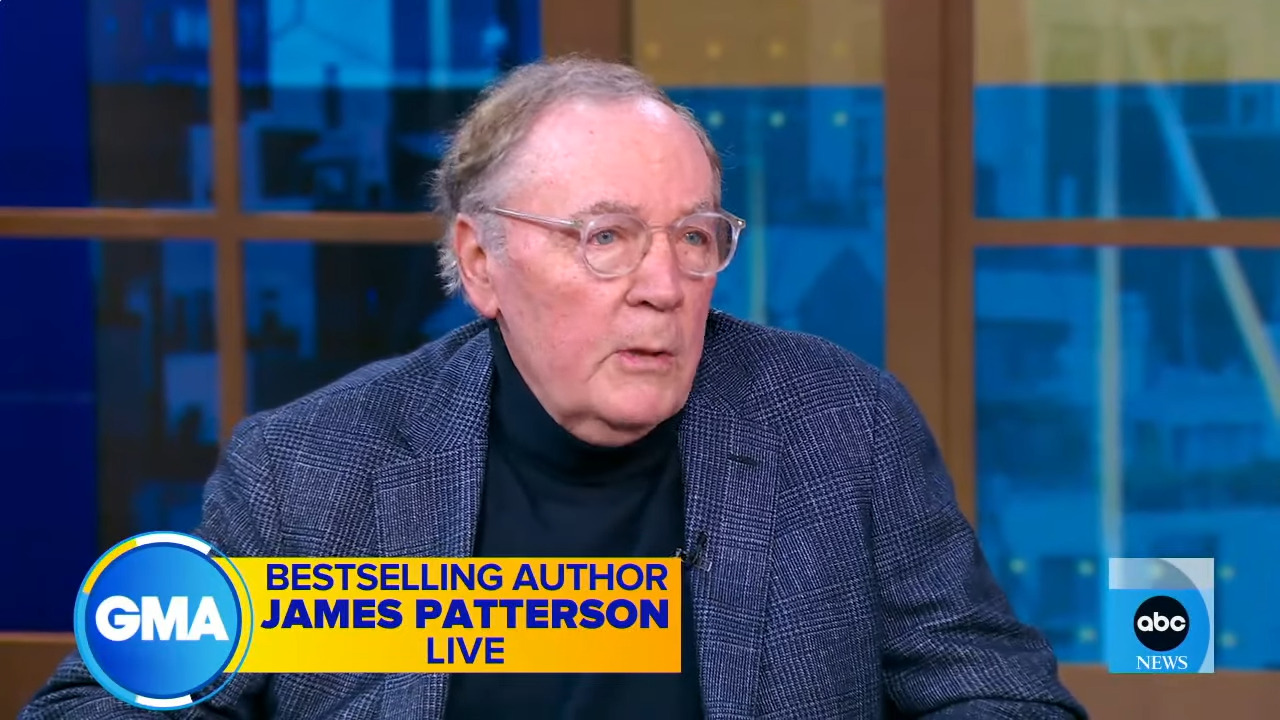 To that end, Patterson then opined that in contemporary times, it is now white men who have trouble securing jobs in the entertainment industry, particularly in publishing, thanks recent pushes to hire contributors for their specific checking of diversity boxes rather than talent.

This mentality, the author then explained, was “just another form of racism.” 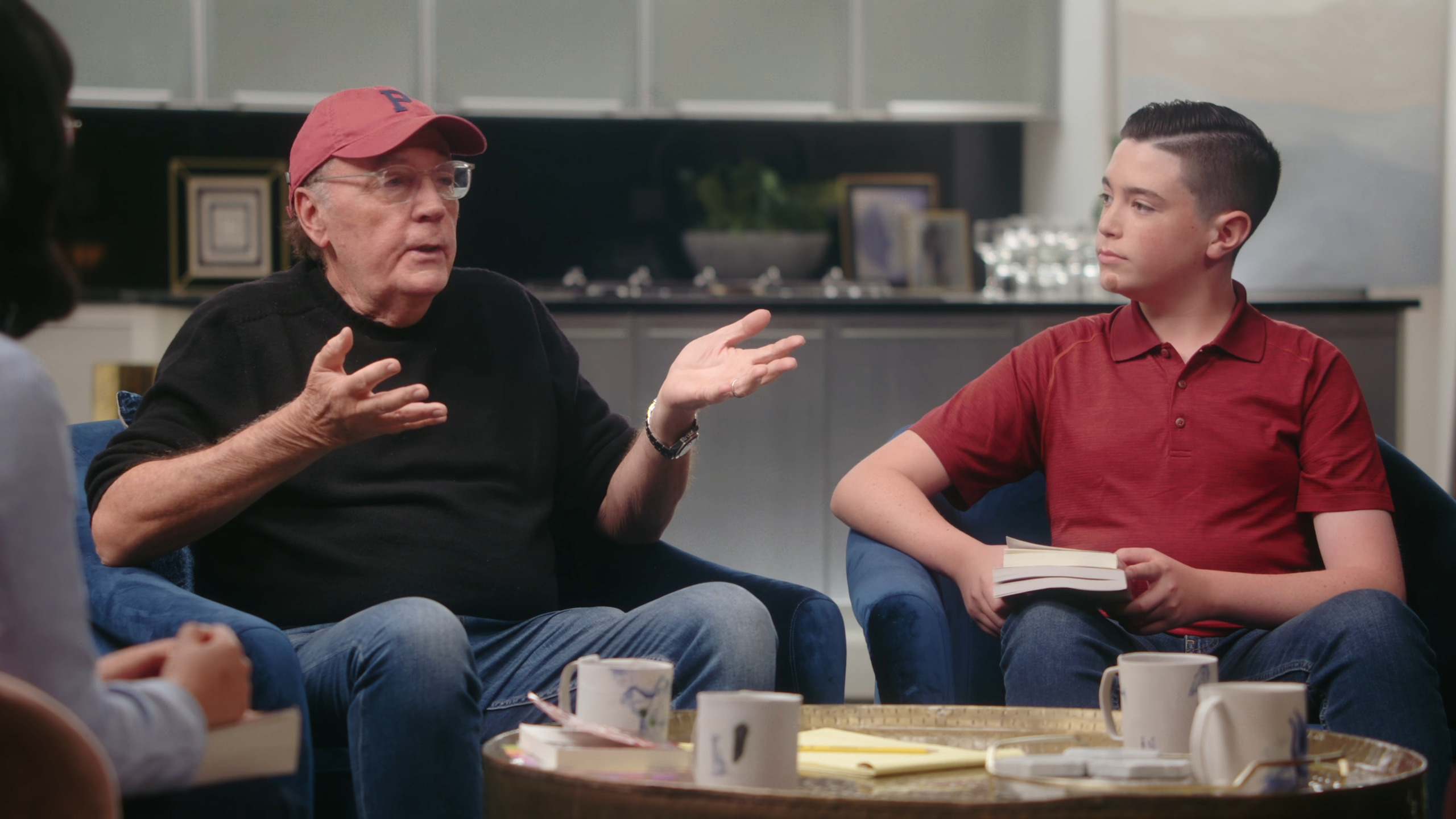 Source: Why James Patterson used to hate books, and what changed his mind | BookTube YouTube

RELATED: Shang-Chi And The Legend Of The Ten Rings Star Awkwafina Apologizes For Using AAVE “As A Non-Black POC,” Quits Twitter

“What’s that all about?” he asked. “Can you get a job? Yes. Is it harder? Yes. It’s even harder for older writers. You don’t meet many 52-year-old white males.”

He also later asserted that he was “almost always on the side of free speech’ – a dangerous opinion to hold in today’s world where actresses like Gina Carano can get their entire careers taken away from them over nothing more than the sharing of an Instagram post which warned against the dangers of political polarization. 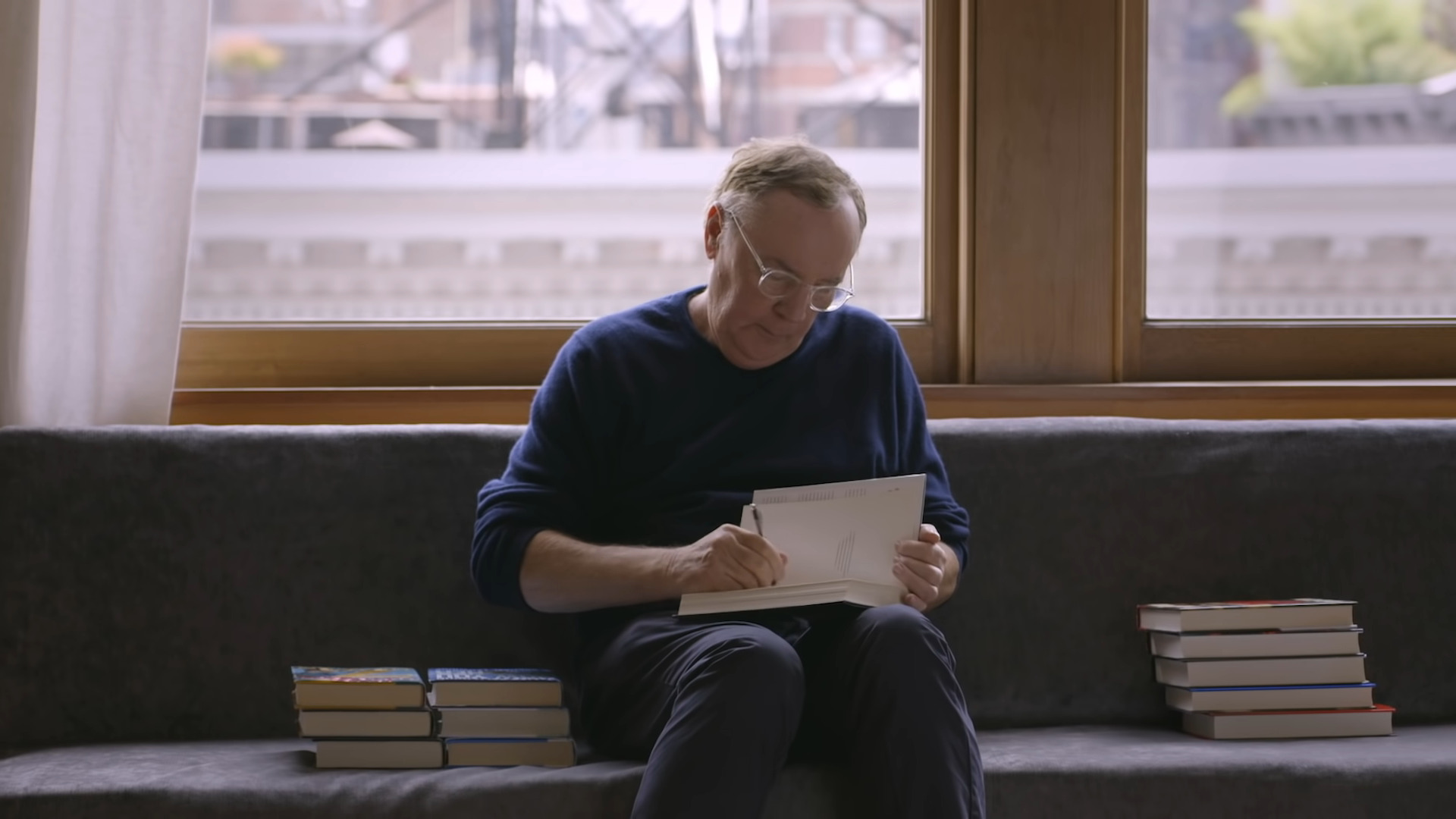 Unsurprisingly, Patterson’s comments were soon met with a wave of backlash from the critical race and gender theory obsessed, such as The Washington Post‘s Timothy Bella, who mocked Patterson by citing an internal audit from Penguin Random House that found seventy-five percent of their contributors were white.

However, when the Post reported this statistic, they failed to look further into the study, as the publishing house also found that only thirty-four percent of their contributors are male.

In other words, women make up the overwhelming majority of published authors at what is one of four big publishing houses in New York. 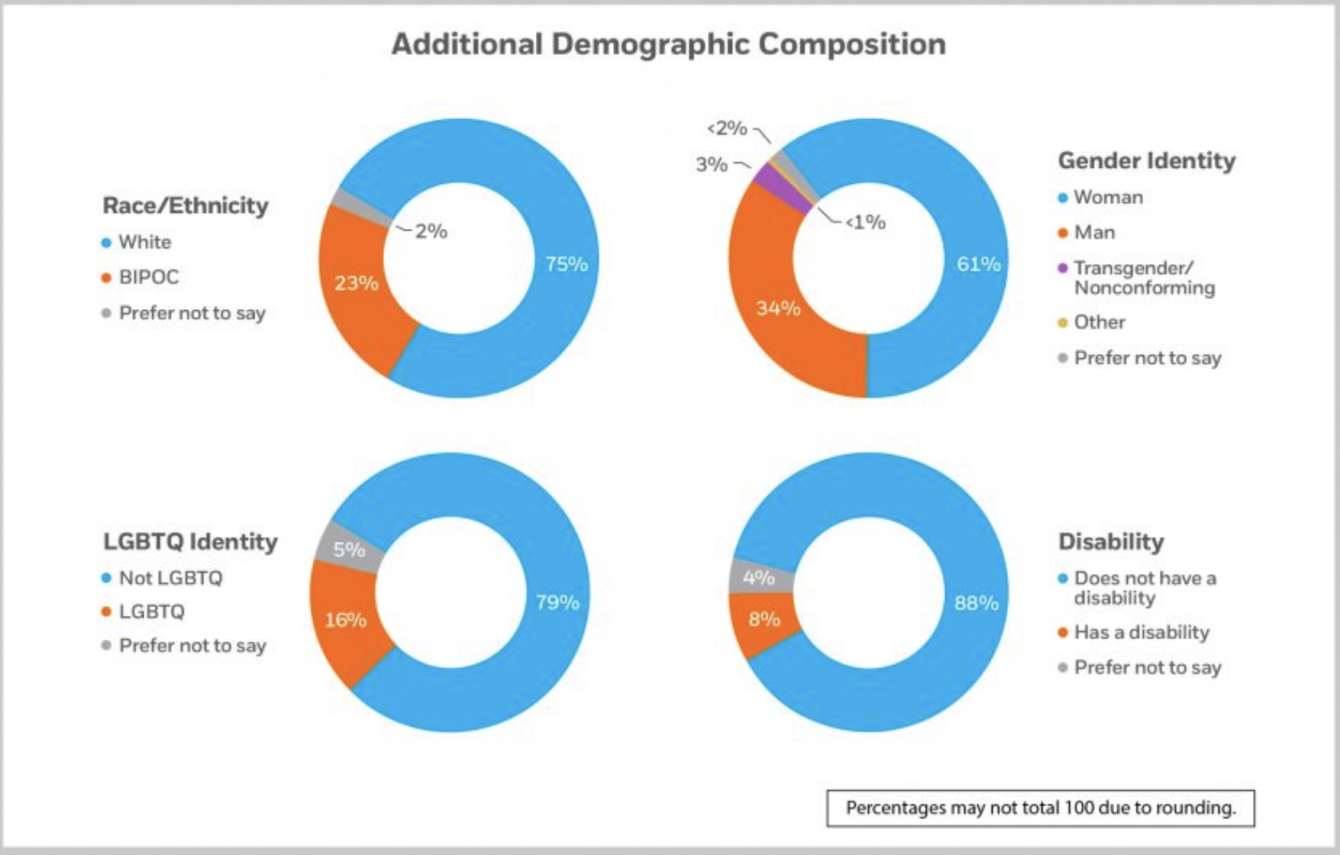 While it initially appeared that Patterson, being in his later years, was unafraid to speak out against the rampant woke-ism infecting Western entertainment, but mere days later, the author ultimately took to social media to issue a corporate-sounding apology for his words.

“I apologize for saying white male writers having trouble finding work is a form of racism,” tweeted Patterson on June 14th. “I absolutely do not believe that racism is practiced against white writers. Please know that I strongly support a diversity of voices being heard—in literature, in Hollywood, everywhere.” 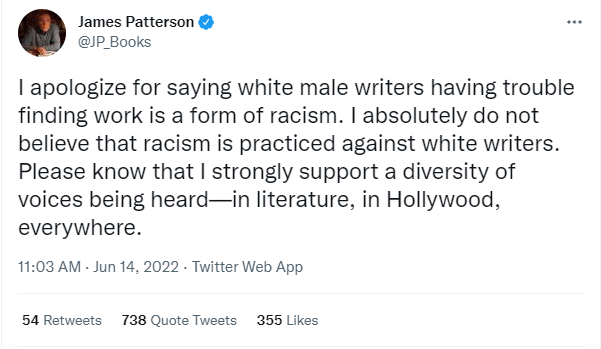 Patterson’s quick heel-turn on his statements to the times left many baffled, in particular the numerous independent writers who have for years warned about the invasion of identity politics into creative spaces.

The first, opened Stewart, was that “The forced apology lets us know that the original statement is 100% factual.” 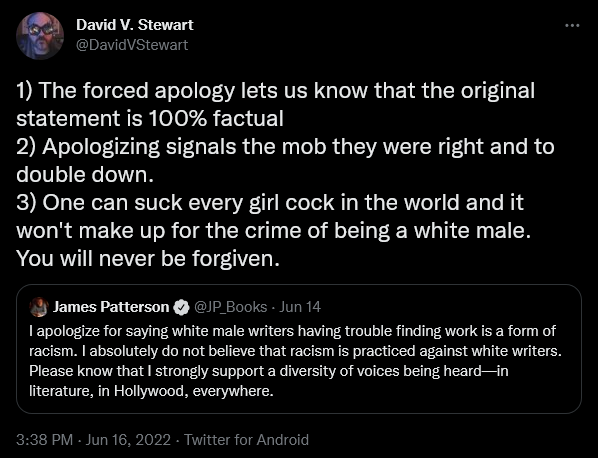 This was followed by his noting that “Apologizing signals the mob they were right and to double down,” “One can suck every girl c–k in the world and it won’t make up for the crime of being a white male. You will never be forgiven,” “he can make more money without a publisher especially if this stage of his career, but approval matters more,” and finally “when he’s canceled anyway, people will remember the gutless cucking.”

Trying to determine the motivation’s behind the elderly author’s apology, Neimeier wrote, “My word. He could go the Brandon Sanderson route & beat his current contract by going direct to readers. The fact that he’s humiliating himself for oldpub shows it’s not about the money.” 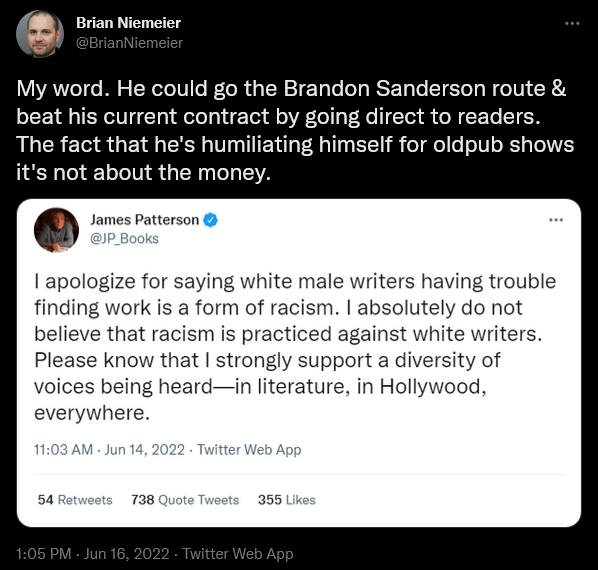 Indeed, Neimeier hits the nail on the head regarding the cycle of problems woke politics holds for creators.

Currently, industry professionals – especially those who know their race and gender will be offered no second chances – are far more worried about their industry clout and perceived relevancy to even attempt making even more lucrative financial gains by taking a stand, and thus are willing to do anything to keep from being replaced by another hungry writer eager for fame. 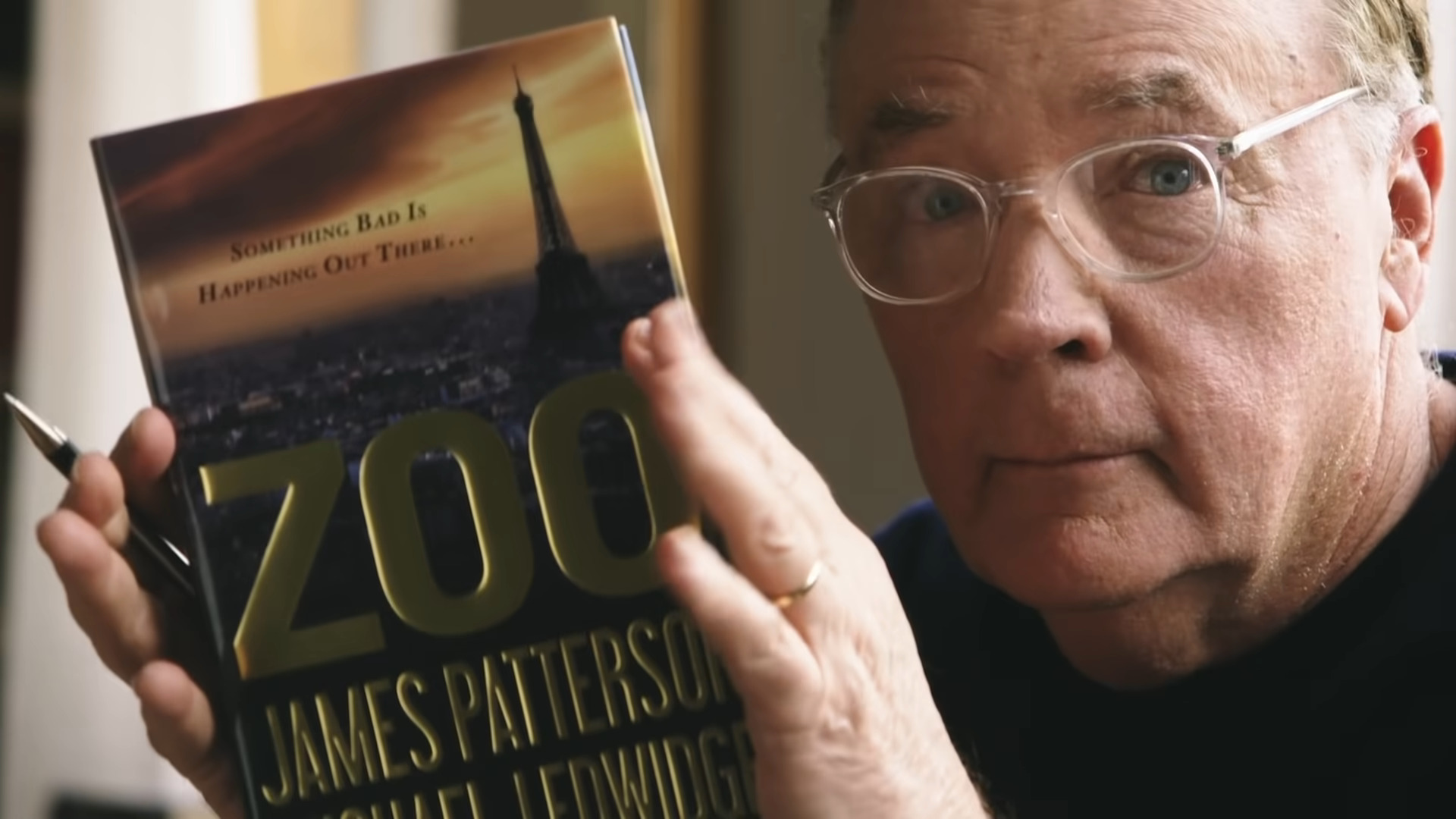 What do you make of Patterson’s claim that white males face a “new form of racism” in the entertainment industry? Do you think he should have apologized? Let us know your thoughts on social media and in the comments down below!

NEXT: Rick Riordan Wasn’t Lying When He Asserted He Was A Racist, Claimed Being White Was “A Drawback” In Now-Deleted Blog Post