Bette Midler is currently facing some backlash from the woke mob after the Hocus Pocus 2 actress made a comment that asserted women are being erased by the introduction of woke terms like “birthing people” and “menstruators.” Further, the cancel culture mob has gone as far as labelling the insufferably woke actress as transphobic.

“WOMEN OF THE WORLD! We are being stripped of our rights over our bodies, our lives and even our name!” wrote a frustrated Midler on the 4th of July, taking the opportunity to make allusion to the Supreme Court’s recent overturning of Roe v Wade.

She continued, “They don’t call us ‘women’ anymore; they call us ‘birthing people’ or ‘menstruators’, and even ‘people with vaginas’! Don’t let them erase you! Every human on earth owes you!” 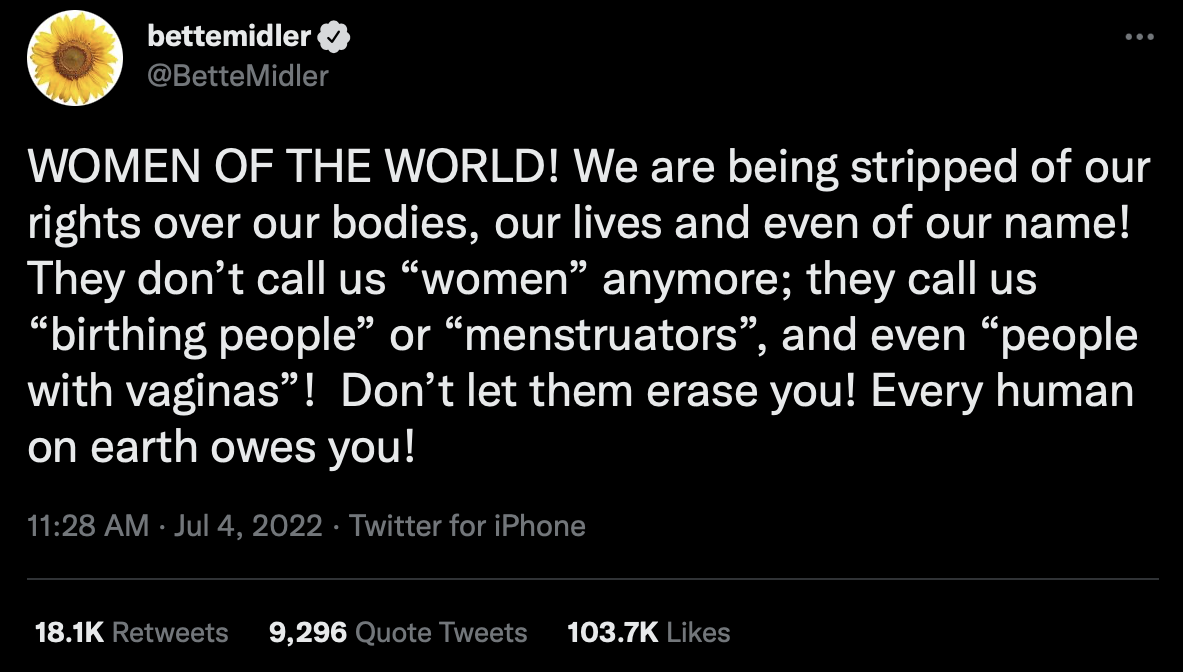 It didn’t take long for the radical Left to take issue with Midler’s comments, accusing the actress of promoting transphobia, and betraying the transgender community.

Transgender ideology activist Panti Bliss-Cabrera wrote, “No. Don’t fall for the anti-trans panic fake nonsense,” reassuring that “No one is erasing women,” and explaining, “In a few small healthcare cases where appropriate they are using trans inclusive language. That’s all.” 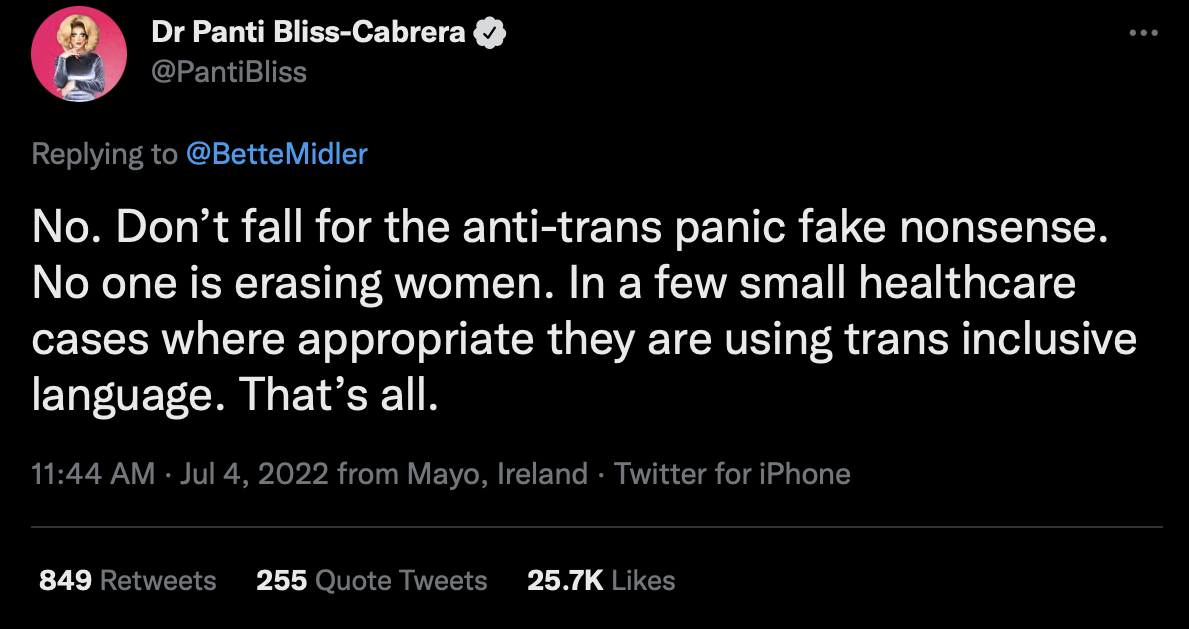 “The fight for women’s rights INCLUDES trans people – trans rights do not erode women’s rights,” assured Ru Paul’s Drag Race contestant Colin Murro (Crystal), adding, “We’re all fighting this together and this trans-exclusionary rhetoric does NOTHING to help that.”

He later added, “Bette – you are a woman. Some other people who give birth are not women. That’s ok!” 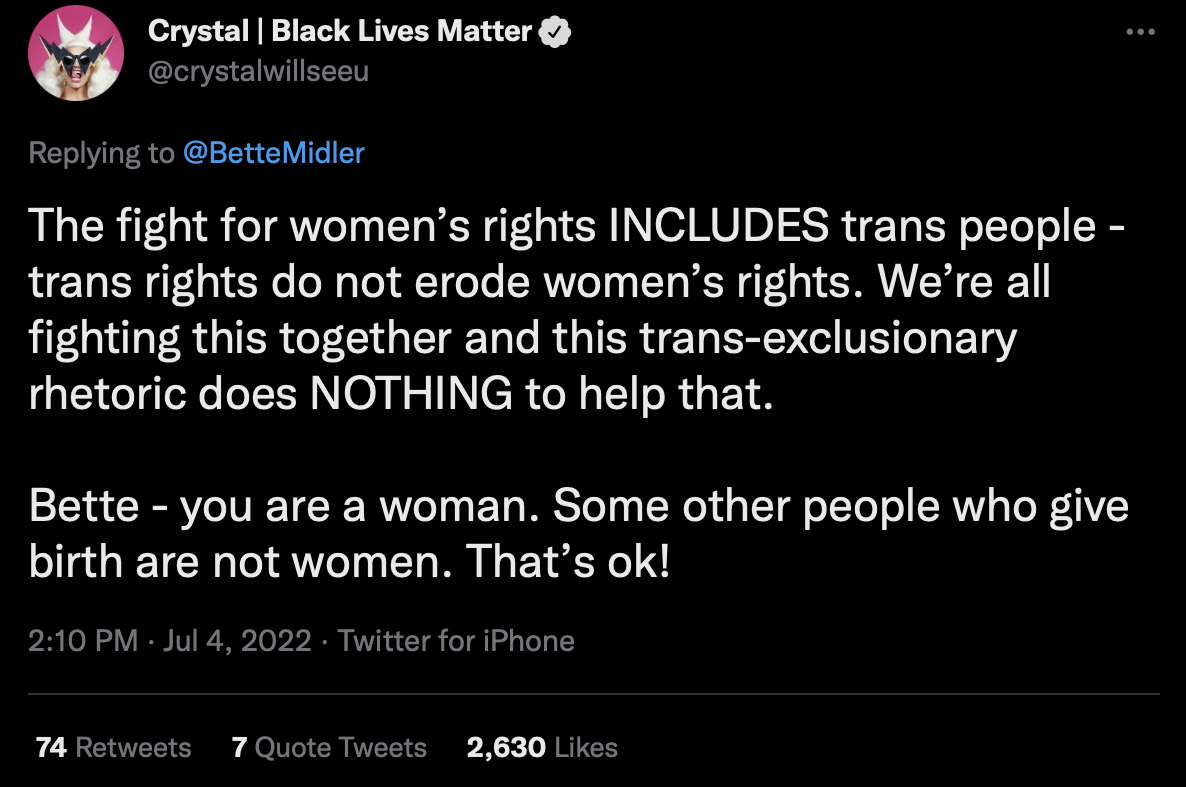 User @IdiopathicPain also took issue with the Hocus Pocus 2 actress, asserting, “I’m a current pregnant, disabled, nonbinary person. I’m not a woman. Thank you for the overwhelming support this does not give me.”

“Understand, I am one of the most vulnerable people out there, both to having my kids forcibly removed from me, and in terms of literally dying,” the user went on to claim. 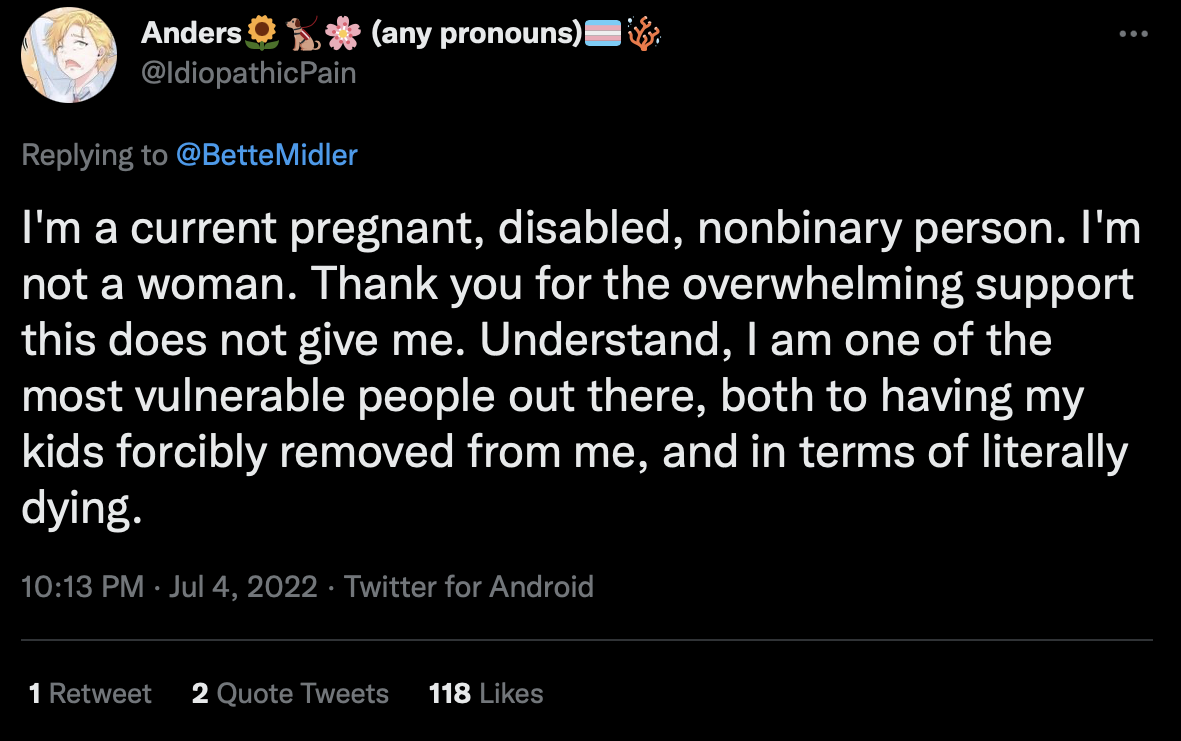 “Better[sic] – ‘birthing people’ is an inclusive term, to include our trans brothers and sisters. I know you well enough to know that you choose to be inclusive,” another user said in response to Midler’s tweet.

Senior lecture at the University of Canberra Law School, Dr. Cristy Clark, wrote, “Please don’t do this. Sex and gender have never, ever been binary and enforcing an arbitrary harms everyone – especially intersex, trans and nonbinary folk.”

“Patriarchy benefits from a rigid binary, not women,” she added. 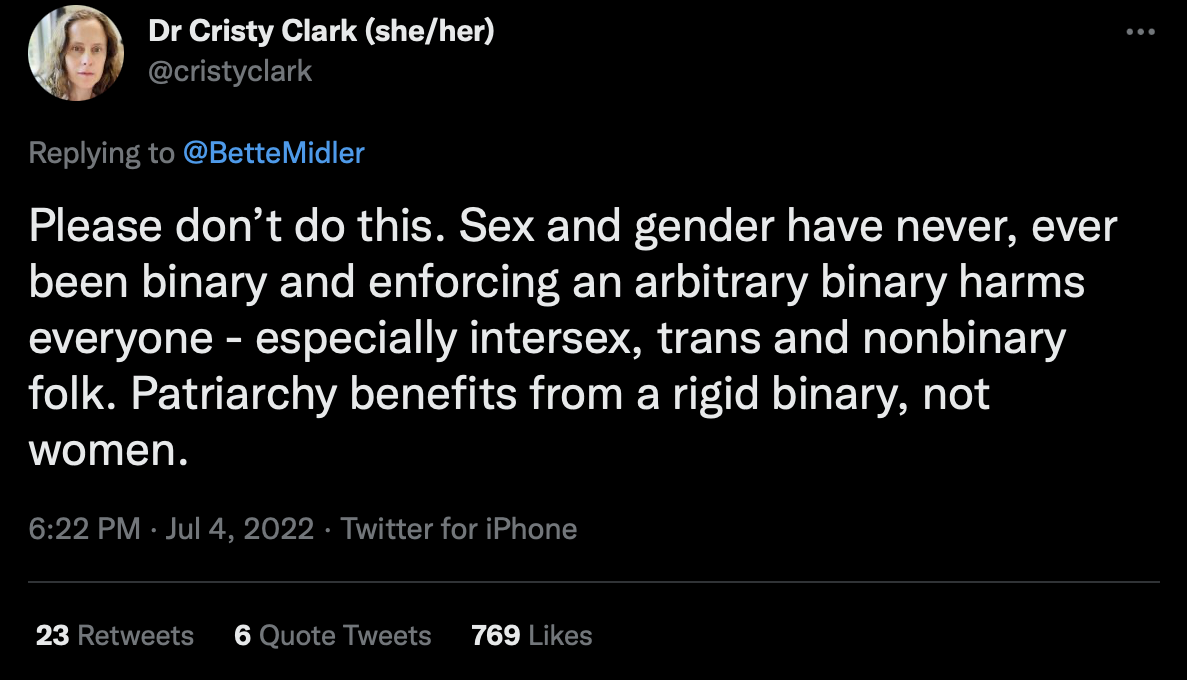 “Bette, this is disappointing to see from you. These are terms we use to include trans men and non-binary people who can get pregnant,” user @LouisatheLast decried.

The frustrated Twitter user elaborated, “It is absurd and dangerous to be lumping attempts at trans inclusivity in with right wing attempts to control our bodies as threats.” 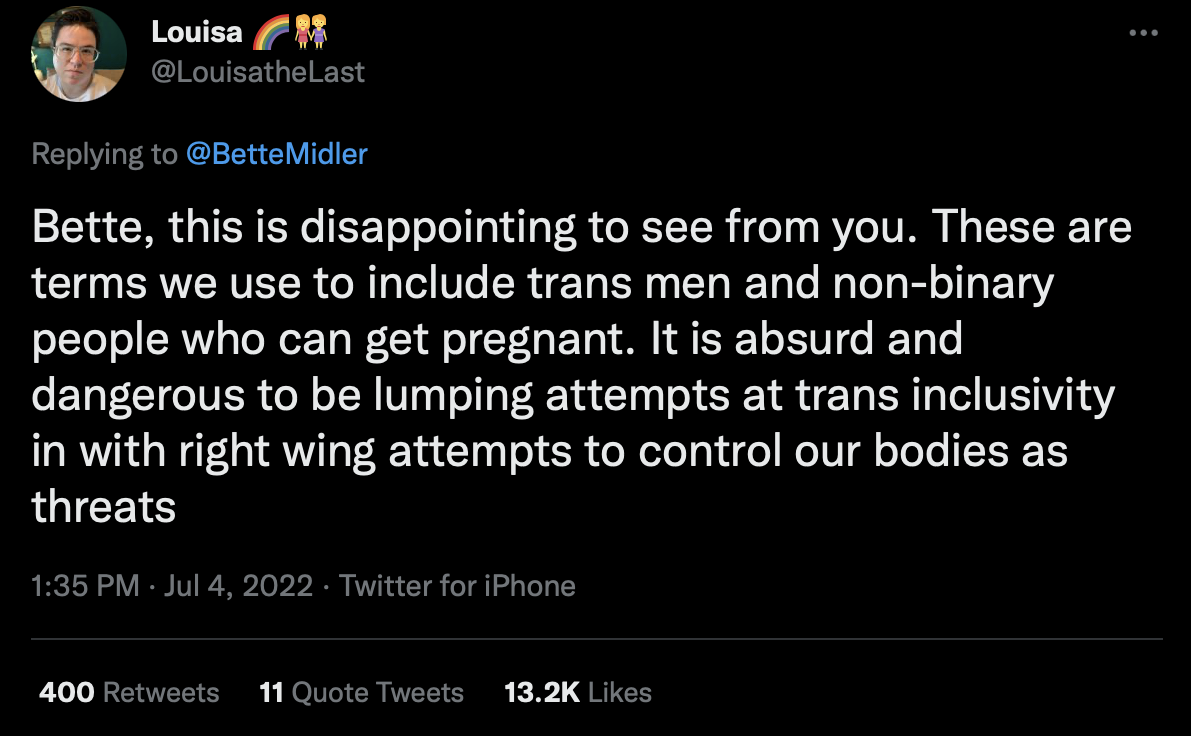 Writer and broadcaster Benjamin Law also denounced Midler’s comments, declaring, “Trans people and those who love and support them have no problem with the term or concept of ‘women’.”

“We’re just after inclusive language when appropriate and needed, to ensure often-vulnerable people are included and protected,” he went on, adding, “It ain’t hard.” 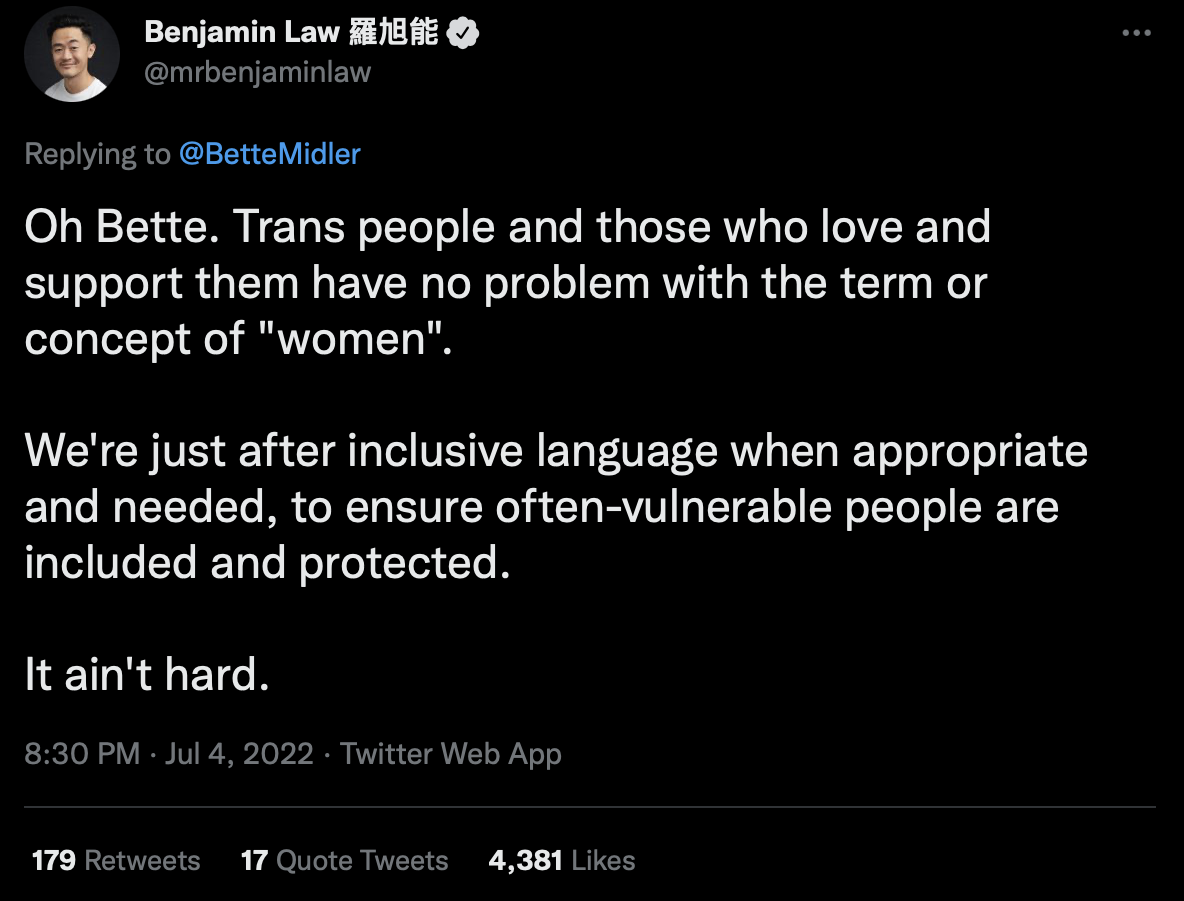 RELATED: The IT Crowd Creator Graham Linehan Says He Was Targeted By Activists Over His Views On Transgender Ideology: “They Took Everything From Me”

“Bette, please rethink. You’re better than being sucked into culture war bulls—t that benefits no one but the cis white men who want everyone else to be under them,” wrote feminist writer Clementine Ford.

She then reassured, “No one is erasing women – the reality is that reproductive justice also includes trans men and nonbinary people.” 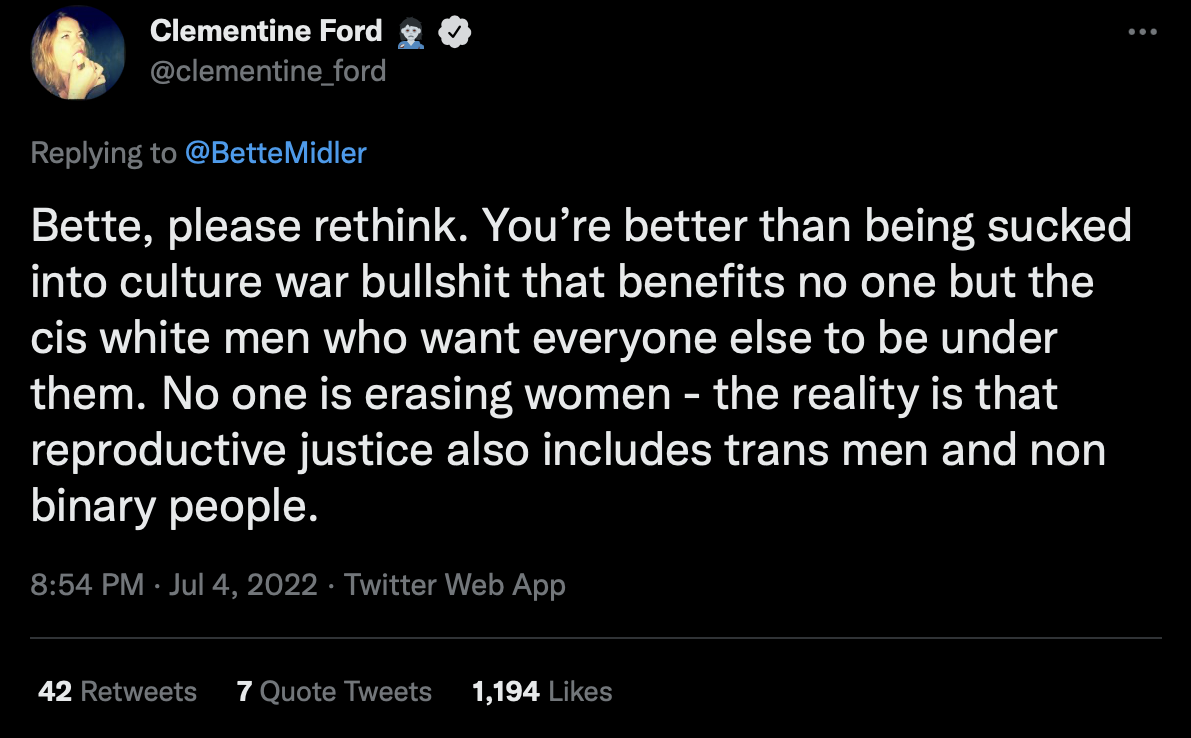 “That language is reflective of the reality that simply not just cisgender women menstruate or have need of reproductive healthcare,” said Maines, who explained, “It takes away nothing from anyone to update and use accurate terminology as our understanding evolves.” 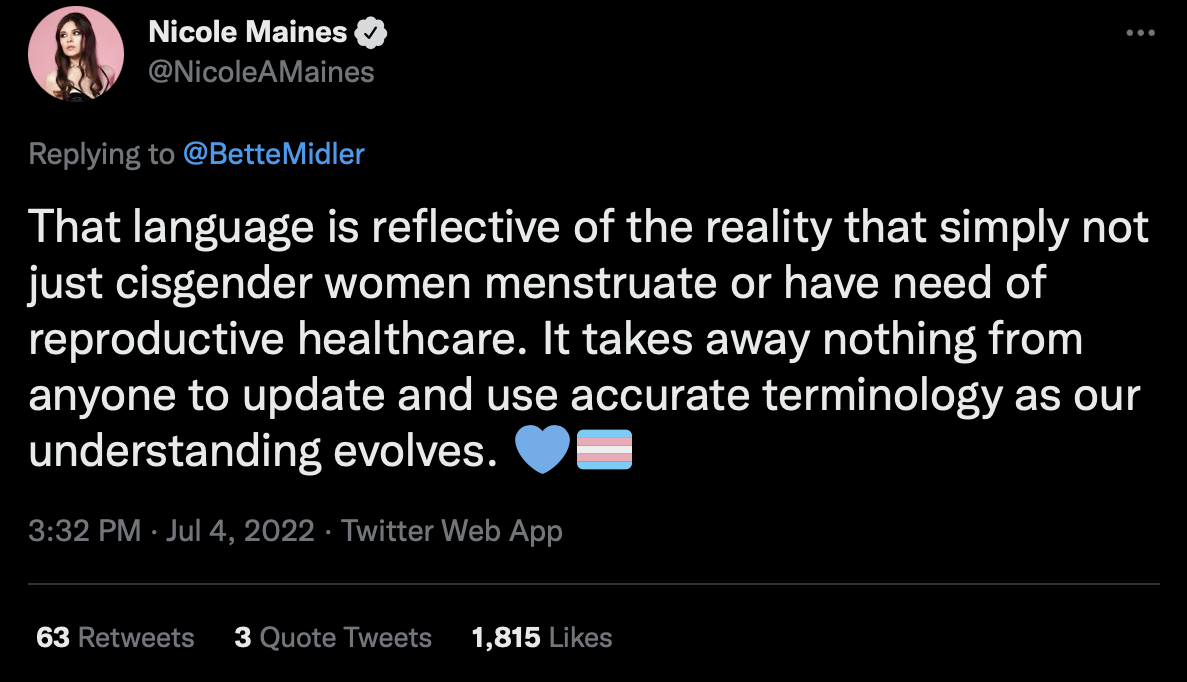 Conversely, Midler did get some support from a small handful of Twitter users who supported the actress’s stance on transgender ideology issues.

Five Times August musician Bradley James Skistimas also replied to Midler’s recent tweet, stating that he has found himself in agreement with the woke actress and jokingly inquired, “Is your account hacked?”

Skistimas would go on to call Midler out on her hypocrisy regarding COVID-19 mandates and her support for the pro-murder ‘my body, my choice’ slogan, adding, “Also, where were you when women of the world were being forced and coerced to get a vaccine jabbed into their bodies?” 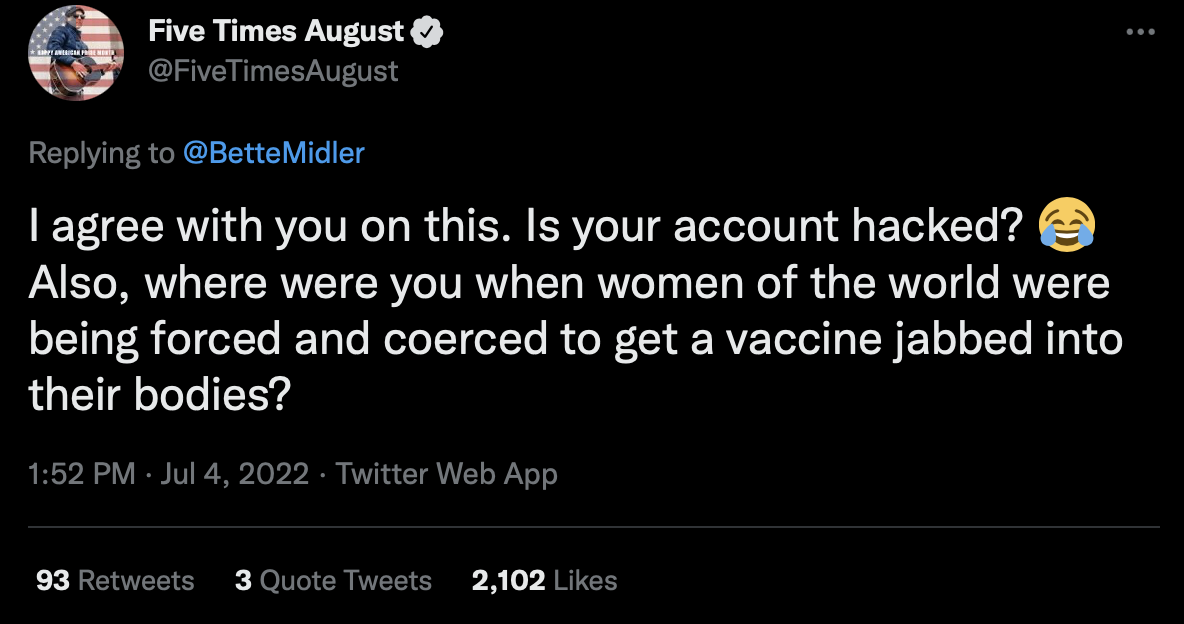 In fairly predictable fashion, prompted by the backlash she was getting, Bette Midler attempted to explain what she meant  in her previously shared tweet.

“PEOPLE OF THE WORLD” prefaced the woke actress, in contrast to her original tweet addressing “WOMEN OF THE WORLD,” explaining, “My tweet about women was a response to this fascinating and well written piece in the NYT on July 3rd.”

She elaborated, “There was no intention of anything exclusionary or transphobic in what I said; it wasn’t about that.” 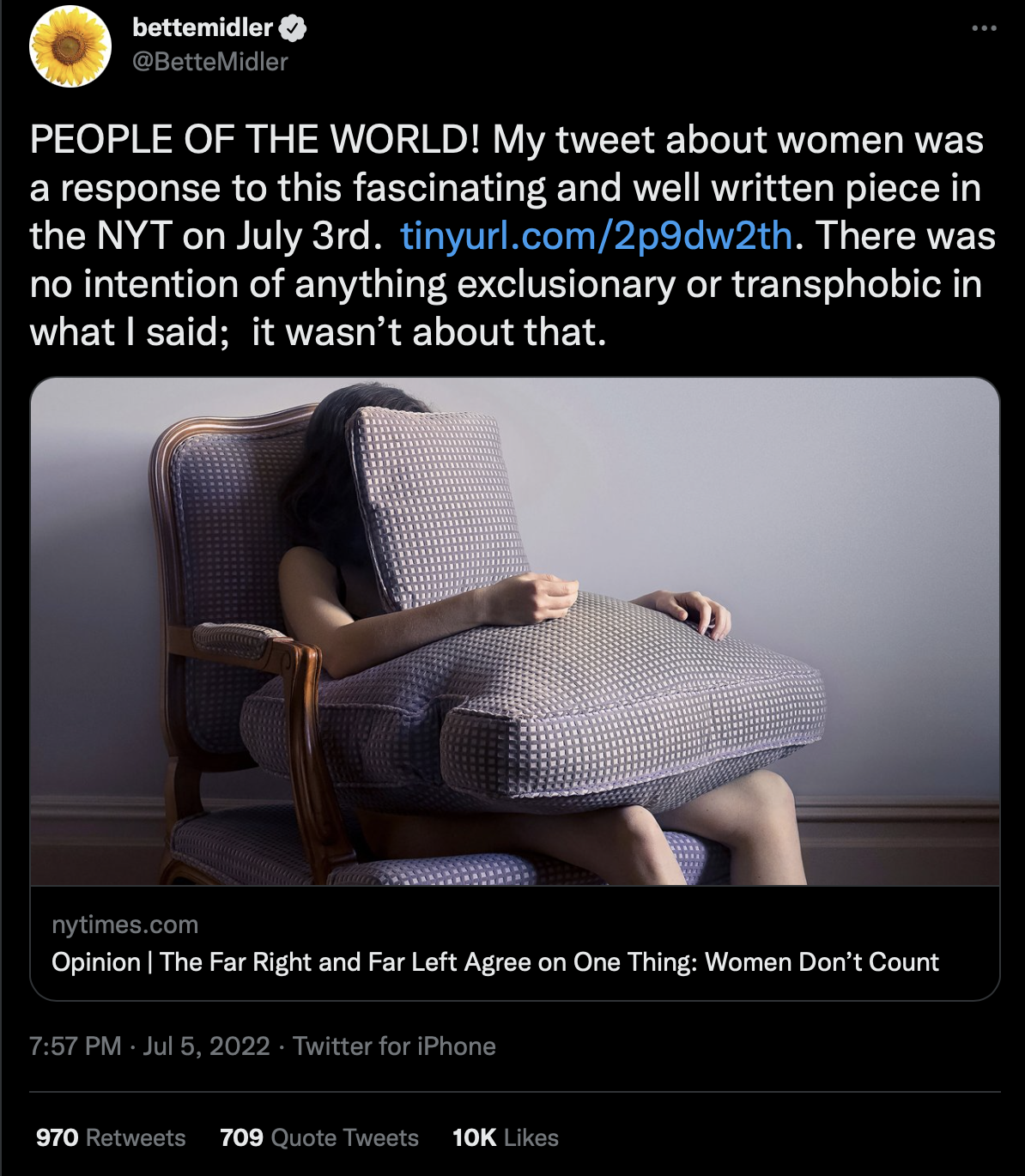 “It was about the same old s—t women — ALL WOMEN — have been putting up with since the cavemen,” Midler further explained in a follow-up tweet.

She added, “Even then, men got top billing. But seriously, folks, if anyone who read that tweet thinks I have anything but love for any marginalized people, go to Wikipedia and type in my name.” 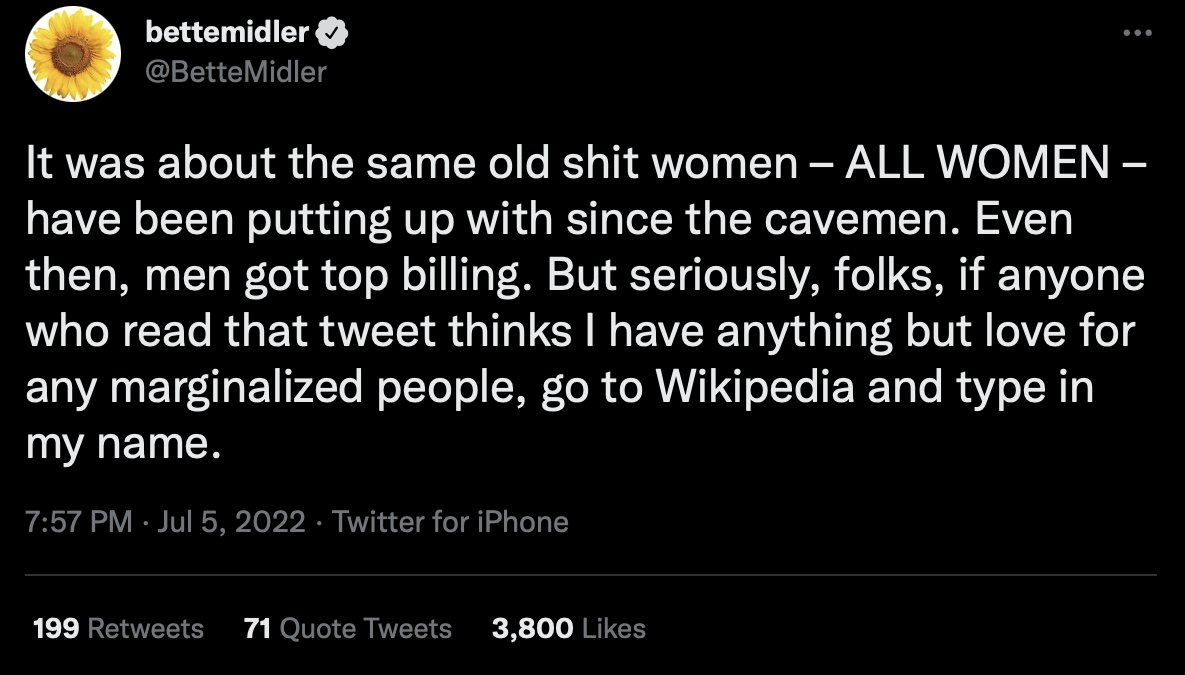 “I’ve fought for marginalized people for as long as I can remember,” Midler claimed. “Still, if you want to dismiss my 60 years of proven love and concern over a tweet that accidentally angered the very people I have always supported and adored, so be it.”

She further declared, “But the truth is, Democracy is slipping through our fingers! I’m all in on trying to save Democracy for ALL PEOPLE. “We must unite, because, in case you haven’t been paying attention, divided we will definitely fall,” Midler would later encourage her followers. 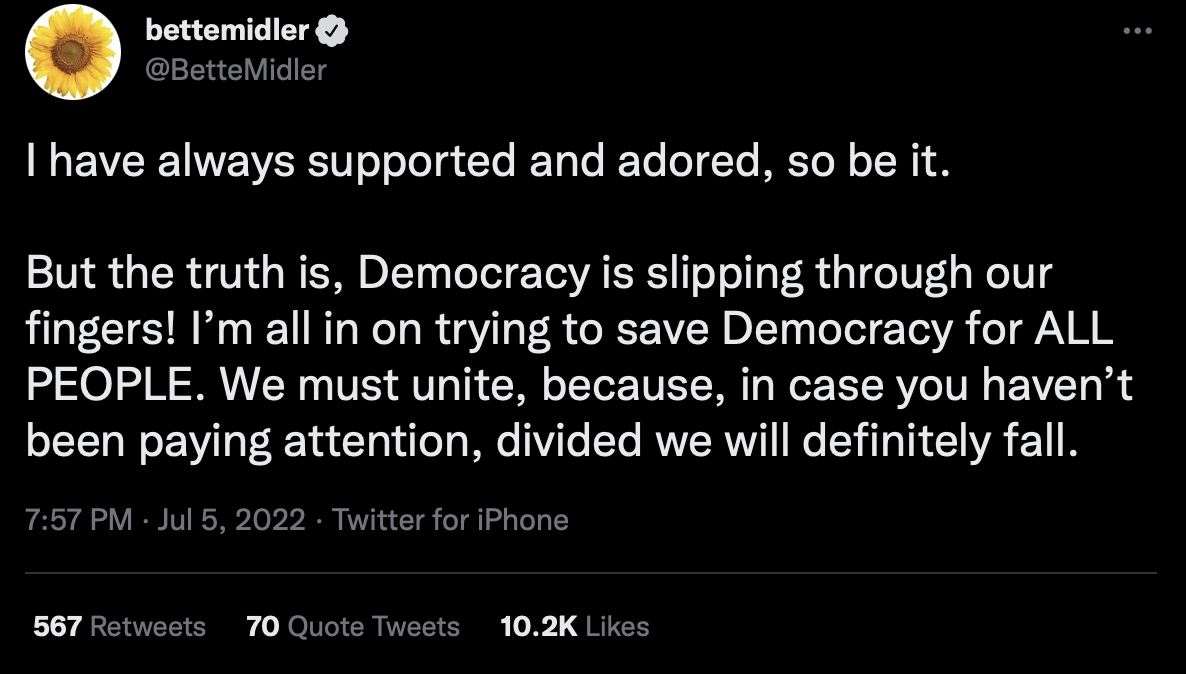 “If you’re about saving democracy for everyone, why did you specifically draw a distinction? Are trans women not part of the fight?” posited an angry user, adding, “WW keep treating womanhood like it’s pie. It’s not. Inclusion isn’t a bad thing. And you still have much to learn.” 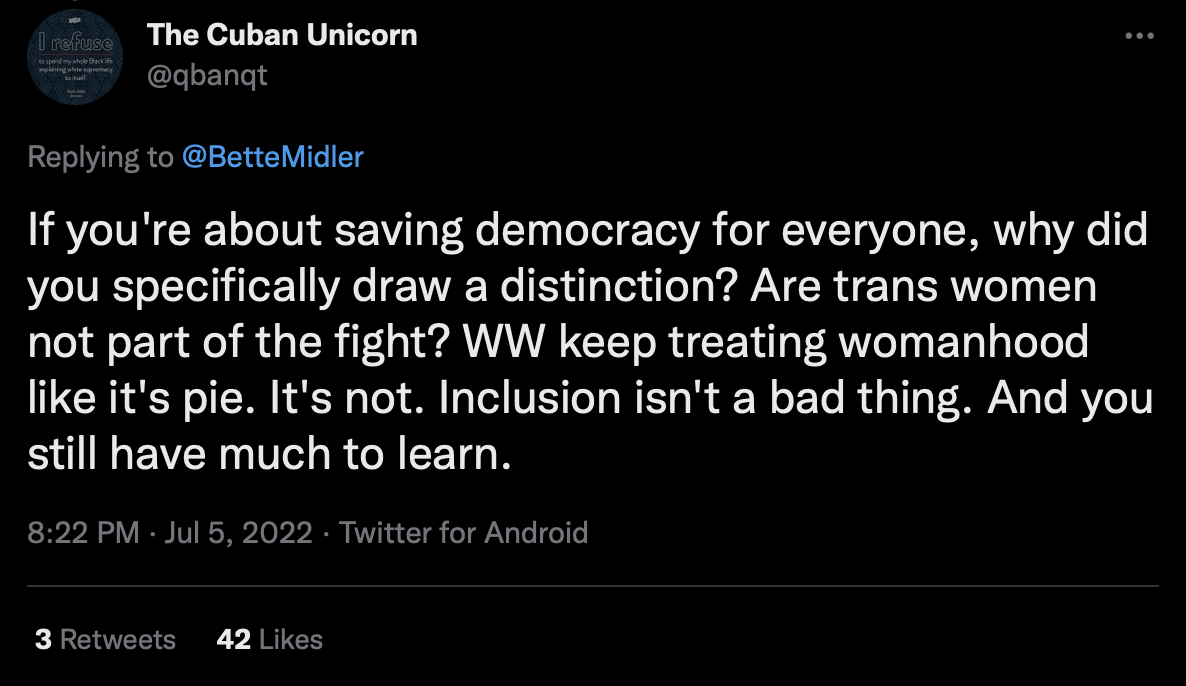 User @corviphagy asserted, “Bette, I’m one of the people you specifically othered in your tweet. I am not a woman, I am transmascuilne. I have ovaries, I can become pregnant, I can menstruate. I don’t want to be called a woman.”

“If I got pregnant, I would want to be called a pregnant person, not a woman,” the disappointed person went on. 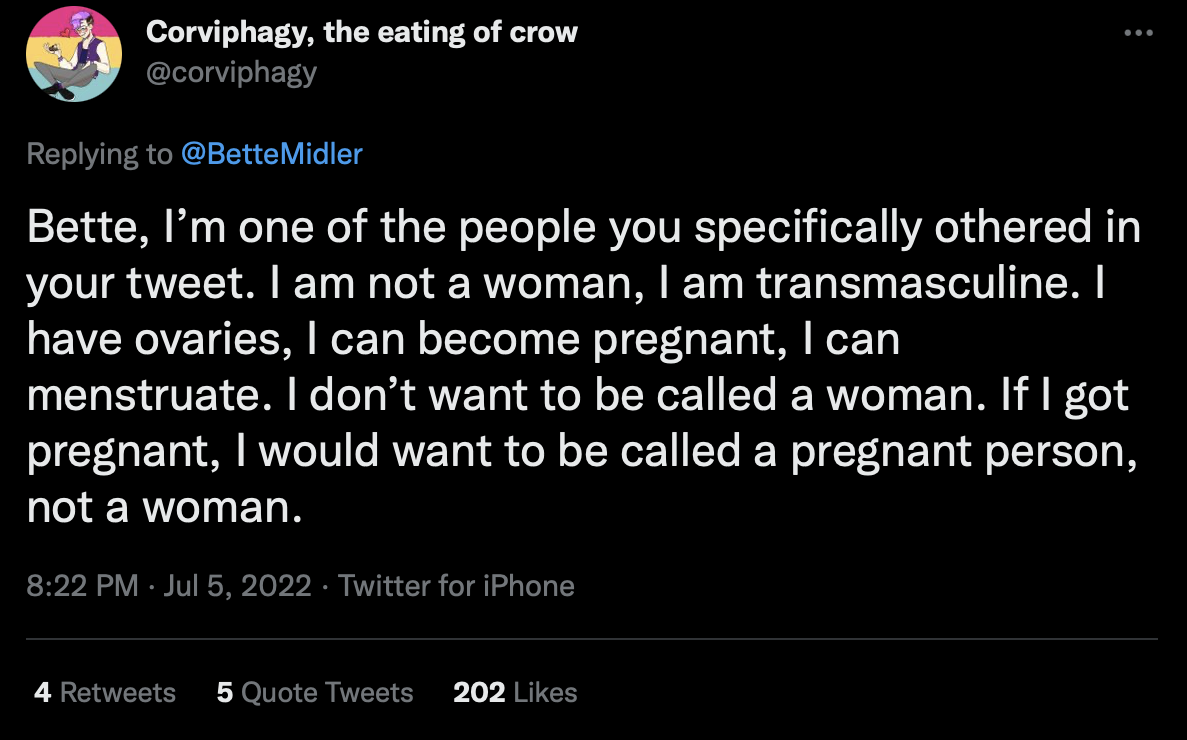 “Still no apology,” simply wrote @elioryab in reply to Midler’s most recent series of tweets.

Transgender actress Alexandra Billings replied to Midler’s tweet, writing, “This is a real shame. Bette. You had a chance to truly own what you did and you tossed it back at us with a vengeance and a smirk.”

“I’m sorry for you and I truly hope you find your way,” Billings added. 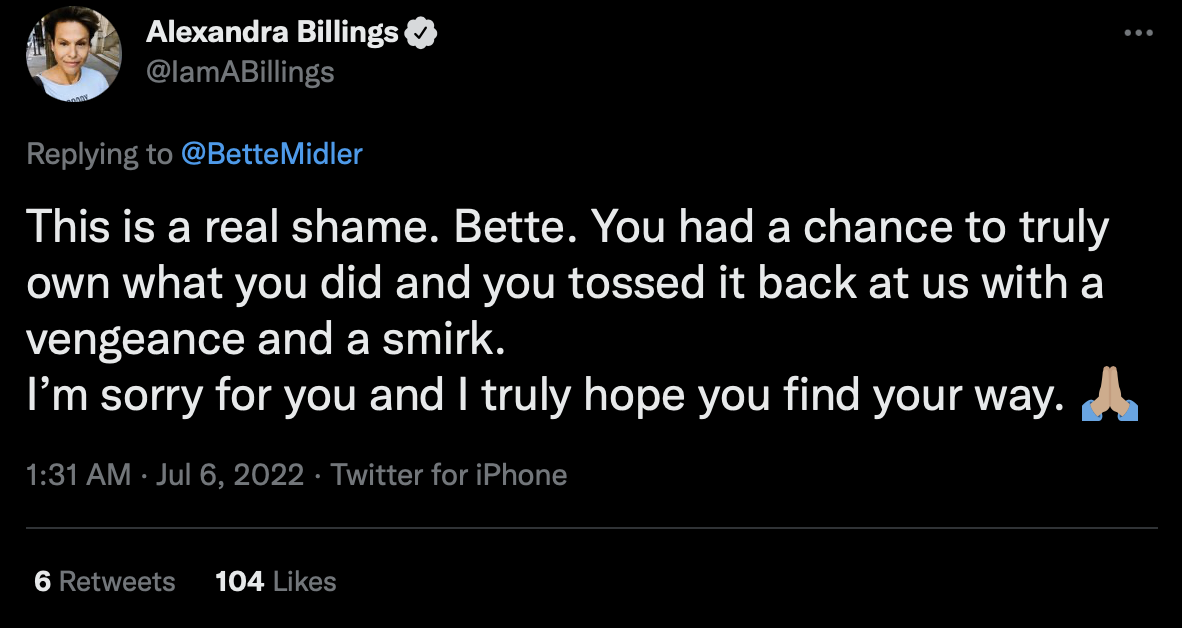 “I was a fan of you. I genuinely had been. I’m so sorry people are willing to recognize other people beyond women give birth ” cried user @toogay_tootired. “When someone says a birthing person, they aren’t singularly speaking on mothers. I have a uterus I’m nonbinary, am I not part of the conversation?” the they/them then user pondered. 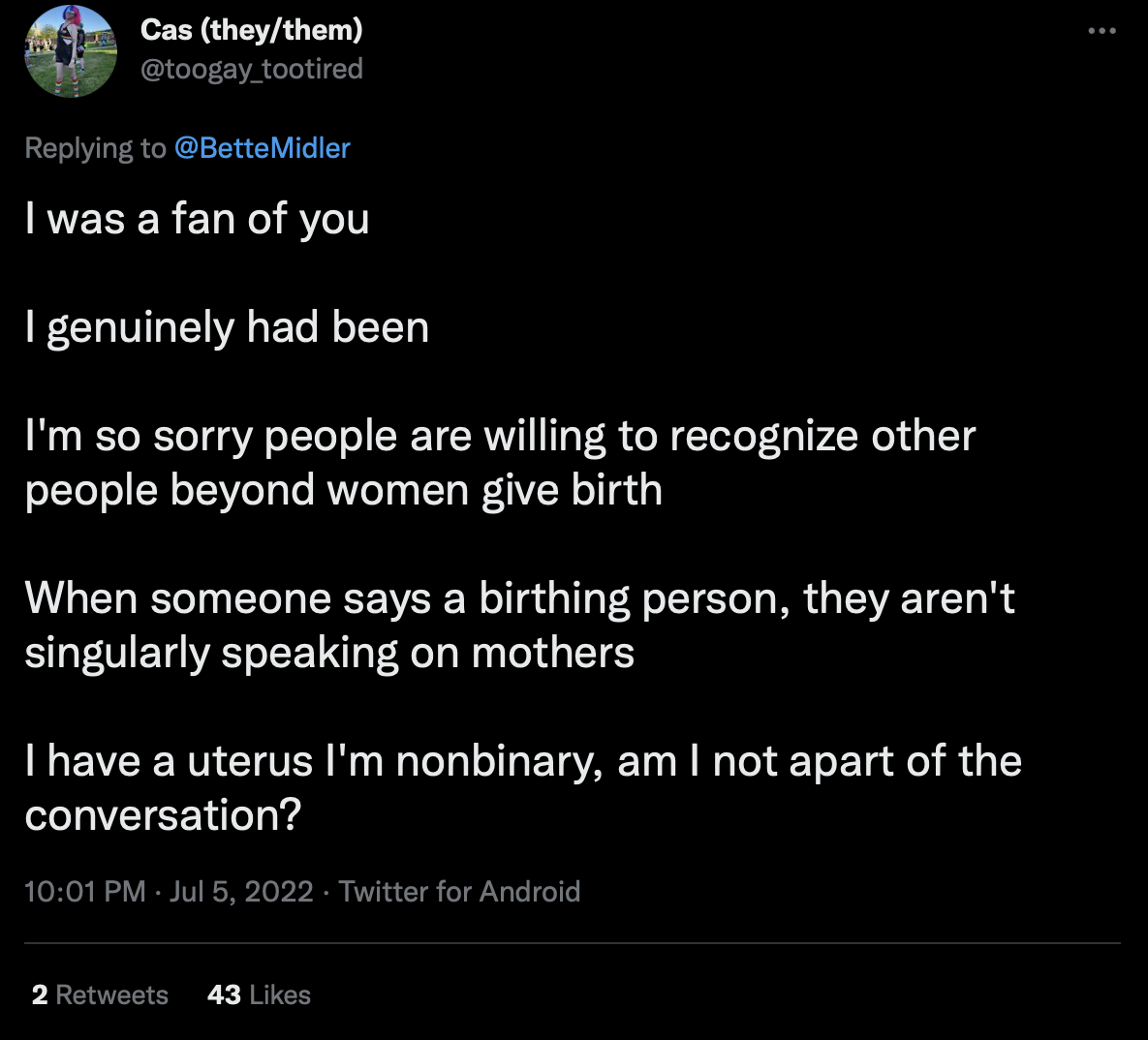 “‘Unite’ the rich boomer says after randomly s—tting on trans people who are literally just trying to survive the fascist take over of the United States. F—k you,” wrote The Humanist Report host Mike Figueredo, who took issue with Midler’s tweets in response to the backlash.

What do you make of the backlash Bette Midler has received over her comments about women being erased by the introduction of allegedly ‘inclusive’ woke terms? Let us know your thoughts in the comments section down below or on social media.

NEXT: Donald Trump Slams Bette Midler Over Insulting Of West Virginians: “I’ll Tell The Real Facts About Her In My Book”