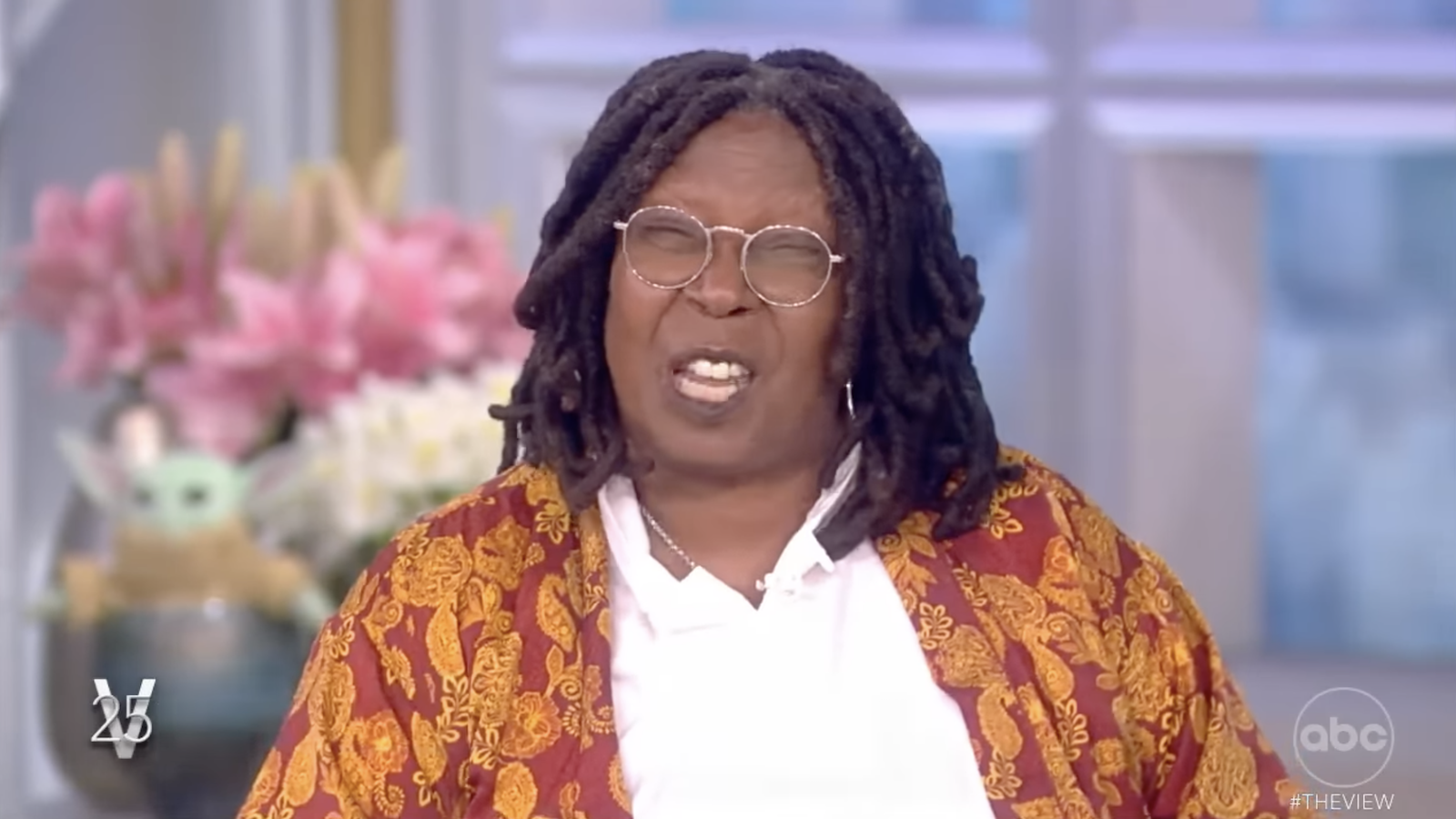 Goldberg levelled her flammatory comments amidst an on-air discussion between herself and her co-host Joy Behar during Monday’s episode of ABC’s The View regarding TPUSA’s Student Action Summit event that took place over the weekend in Tampa, Florida.

As per Fox News, after the two ridiculed the event’s use of pyrotechnics and flashy graphics as taking “a page from the WWE”, Goldberg then turned to wrongly assert that the conservative organisation was tied to the GOP. 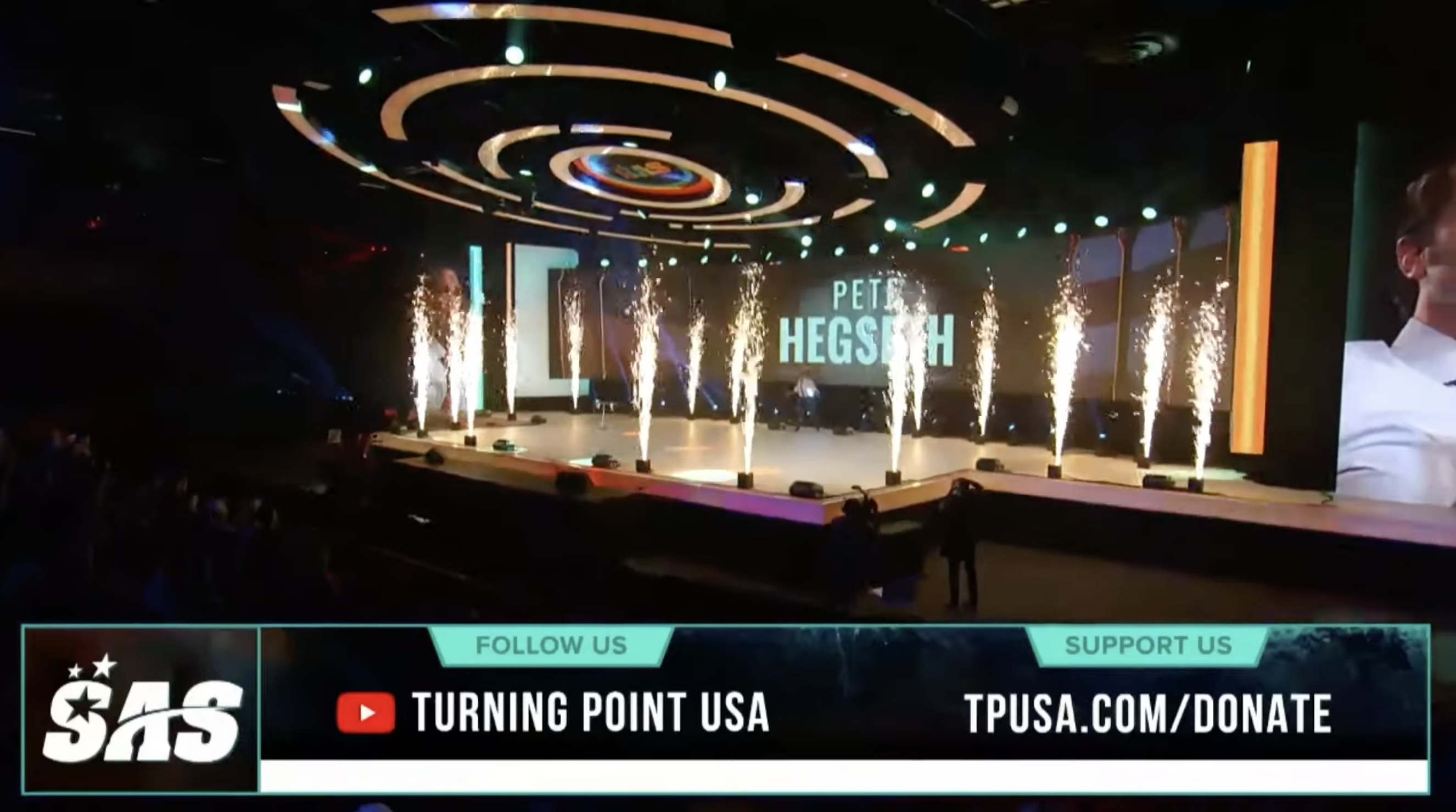 Adding insult to injury, the woke presenter also implied that the organisation was a Nazi organisation based on the presence of neo-Nazi protesters outside the venue where the event was being held.

“Neo-Nazis were out there in the front of the conference with antisemitic slurs and, you know, the Nazi swastika and a picture of a so-called Jewish person with exaggerated features, just like Goebbels did during the Third Reich,” she claimed. “It’s the same thing, right out of that same playbook.”

In a legal disclaimer issued immediately following Goldberg’s accusations and later read on-air by co-host Sarah Haines, TPUSA made it clear that they condemned the neo-Nazis and reassured the show’s panel that they had “nothing to do” with them.

However, in turn, the Guinan actress interjected, “But you let them in, and you knew what they were.”

Not only would this assumption would later be proven to be inaccurate, but as per Fox News, The View panelists were then “forced to read another disclaimer and explain the neo-Nazis were ‘outside protestors’ and TPUSA didn’t let them in.”

“My point was metaphorical,” Goldberg countered in an attempt to justify her outrageous, asinine, and uneducated claim. 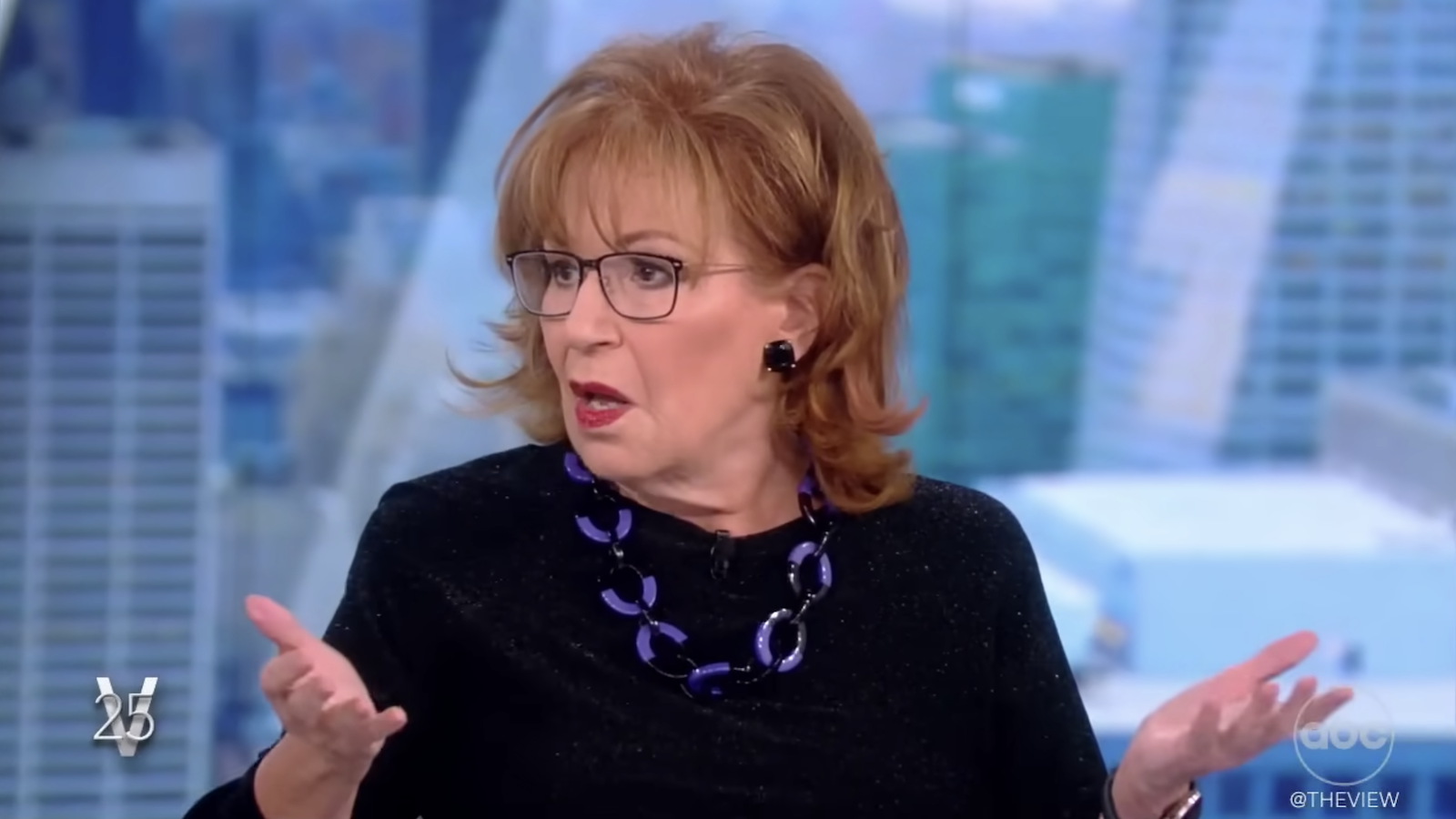 Eventually, TPUSA in-house counsel Veronica Peterson hit the show’s panelists, and specifically Goldberg with a lengthy cease and desist letter on the grounds that “The View hosts intentionally and falsely associated TPUSA with neo-Nazi protestors outside the event placing TPUSA in denigrating and false light and negatively impacting its public perception.”

In-house counsel for Turning Point USA, Veronica Peterson, penned a lengthy cease and desist letter in light of the Disney-owned talk show’s unsatisfactory   addressing of the comments made by Goldberg and Behar.

Such action will not be tolerated,” her letter elaborated. “Specifically, The View hosts insidiously and cavalierly stated that TPUSA ‘let [neo-Nazis] in’ to its SAS event, metaphorically ‘embarase[d] them’ and that neo-Nazis were ‘in the mix of people.’”

“The assertion that TPUSA is complicit or affiliated in any way with the neo-Nazi protesters outside the event is outlandish, false, defamatory, and disgraceful,” it added. 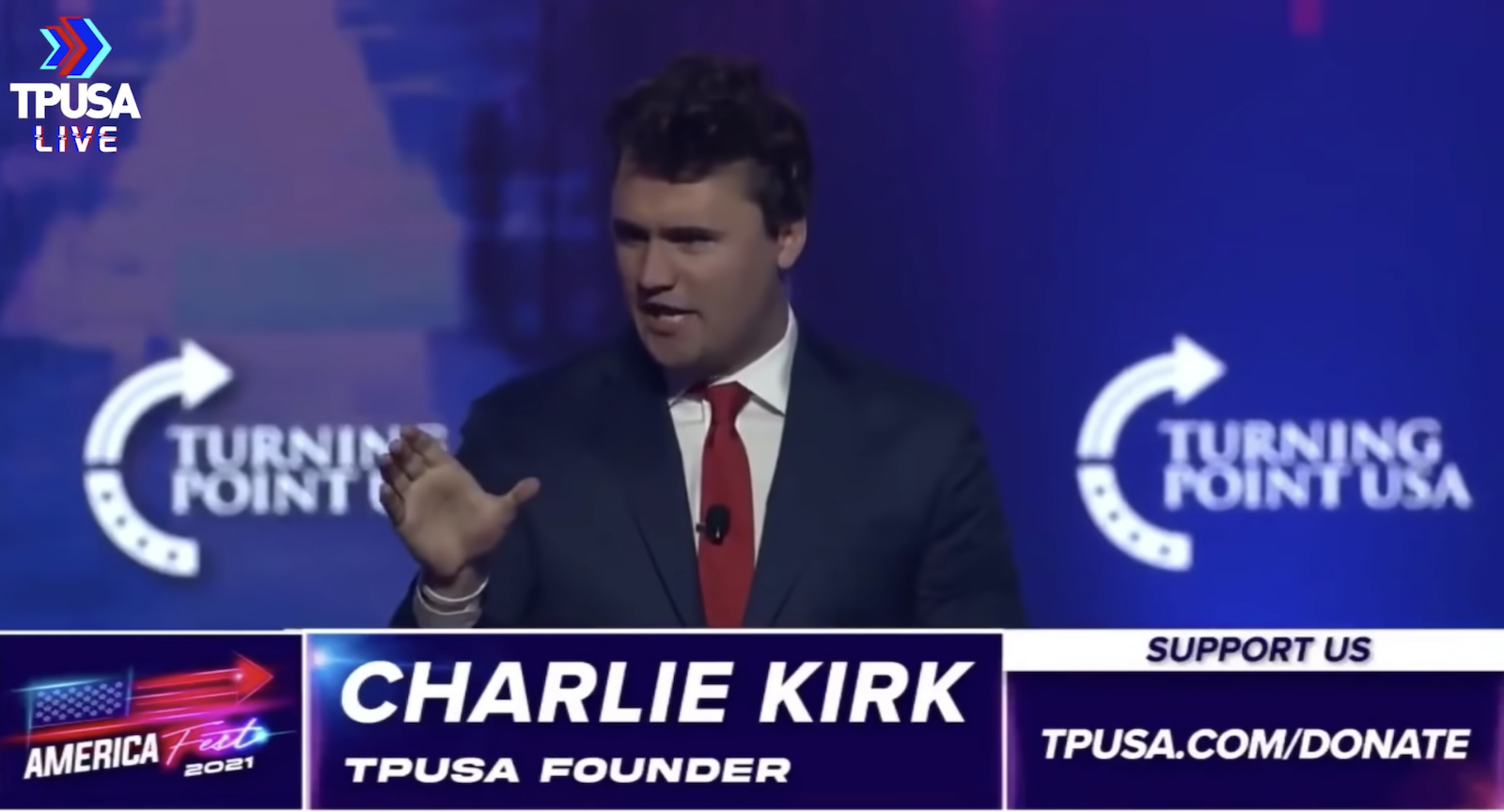 Peterson then fervently explained that the cease and desist was being issued because “Even after Ms. Haines reluctantly read the TPUSA statement that it condemns the group of neo-Nazis and that the group had nothing to do with TPUSA, its event, or its student attendees, Ms. Goldberg continues the false tirade against TPUSA, asserting that somehow the organization and its attendees were ‘complicit’ and/or associated with the outside protest.”

“To be abundantly clear, TPUSA aggressively and completely condemns the ideologies of neo-Nazism and has zero connection to the protestors outside the event. Since these individuals were located on public property, TPUSA security attempted to, but was not permitted to remove them,” Peterson clarified. “In cases where the communication is of such a nature that the court can presume as a matter of law that the communication will tend to degrade or disgrace the party defamed, special damages are presumed.”

Ultimately, Peterson concluded by sharing “TPUSA’s demands”, which included requests “that ABC immediately cease and desist from further unlawfully defaming TPUSA, retract the defamatory statements identified above, and issue a public statement apologizing for and correcting the above defamatory and false statements.”

“Should ABC decide not to comply with the demands above, TPUSA is prepared to promptly take all steps necessary to protect its rights, including pursuing all available legal remedies, seeking monetary and non-monetary damages, injunctive relief, and attorneys’ fees and costs,” the attorney concluded. 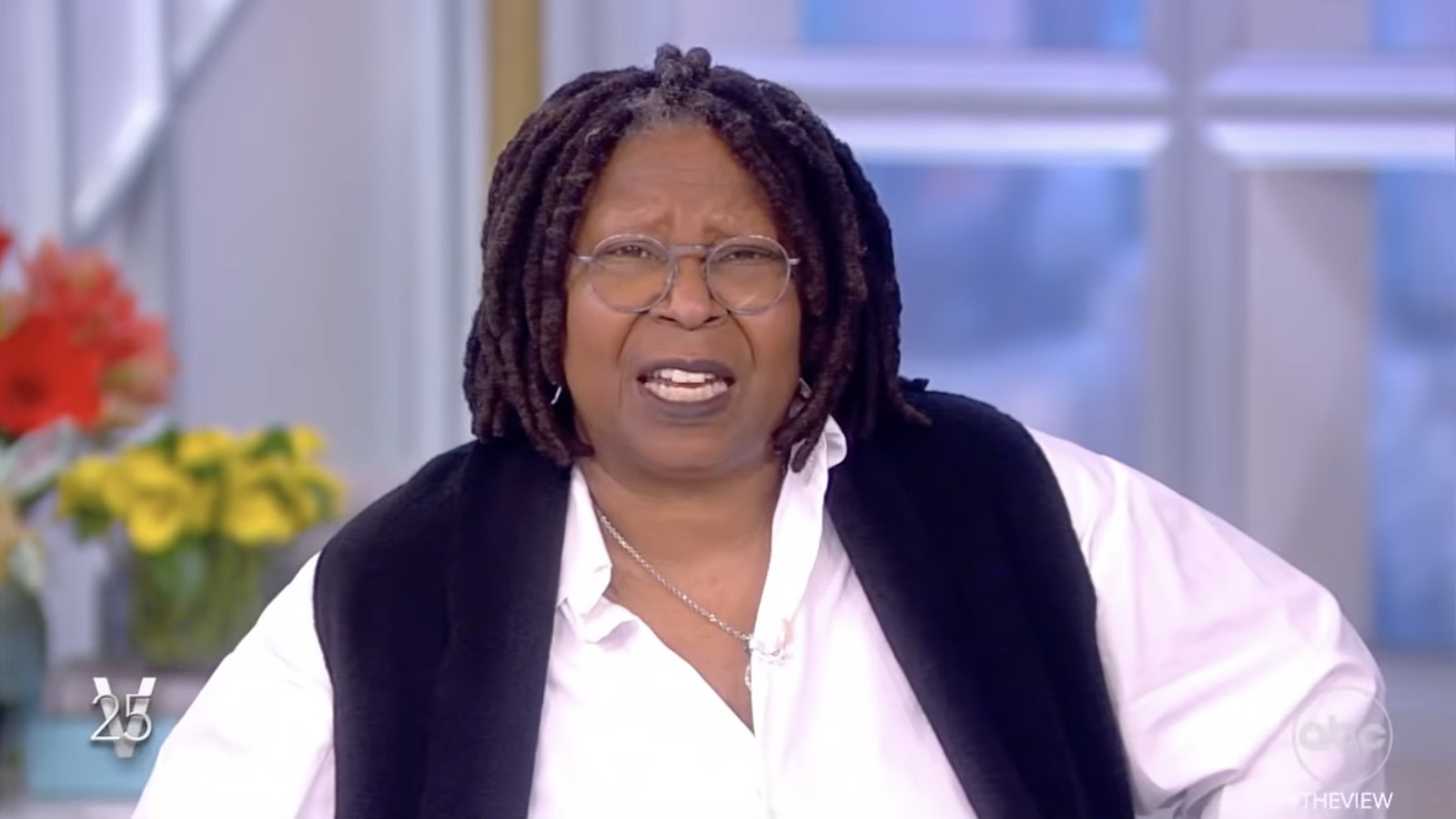 Addressing the cease and desist letter on Wednesday morning’s show, Haines formally apologised to the conservative organisation, while Goldberg neither addressed nor apologised for her role in the controversy.

She would also offer clarification regarding her co-host’s uneducated assumptions about TPUSA’s being an official GOP convention, capitulating, “Turning Point USA wanted us to clarify that this was a Turning Point USA Summit and not a Republican Party event. So we apologise for anything we said that may have been unclear on these points.

TPUSA wasted no time in calling out the actress for her refusal to retract her comments, sharing a clip of Haines’ apology and criticising how “Whoopi remained silent and has not retracted her comments that TPUSA ‘metaphorically’ embraced ‘Nazis.'”

UPDATE: The View has issued yet another formal correction to TPUSA and its students LIVE on air. The apology was issued by Sara Haines. Whoopi remained silent and has not retracted her comments that TPUSA “metaphorically” embraced “Nazis." https://t.co/rcTawUTbpX pic.twitter.com/rANUlmXZwO

The organisation’s founder, Charlie Kirk, also called out Goldberg for her avoidance of responsibility.

“Notice how Whoopi stays curiously silent for once in her life…” he wrote on his personal Twitter account. 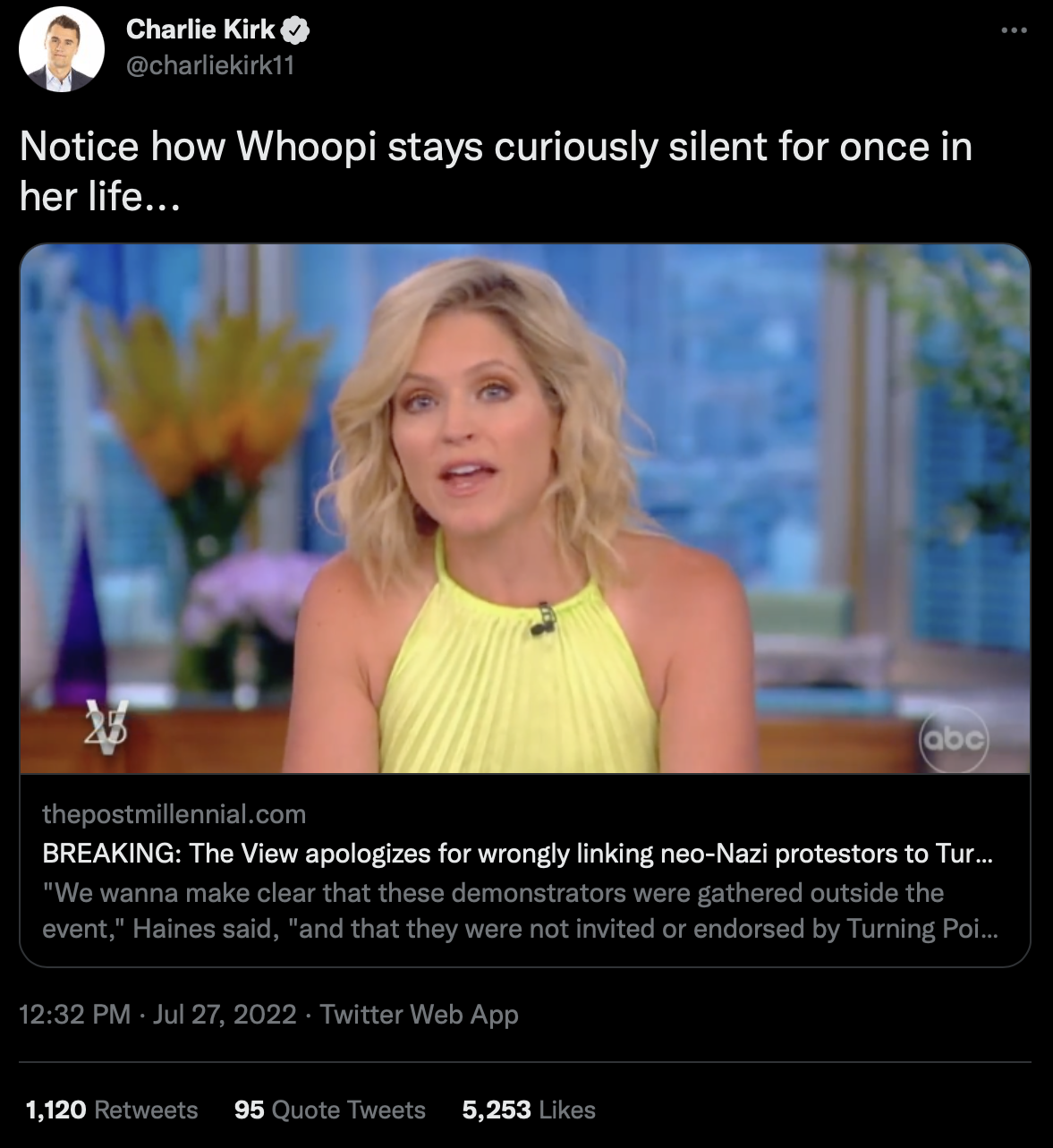 Finally, on July 28th, Goldberg finally issued an apology on that day’s episode of the View.

However, she then unceremoniously concluded, “So, my bad, I’m sorry,” prompting the TPUSA to question whether or not they should “accept this apology”.

Driving the final nail into Goldberg’s accusations, TPUSA would respond by sharing a clip of an altercation between individuals wearing TPUSA shirts, presumably organisation staffers, and the neo-Nazi “cowards the media framed as conservatives”.

These are the cowards the media framed as conservatives.

“Truth will always prevail,” they asserted before, in an act suggesting that they are not satisfied by either of The View’s apologies, ending their tweet with the #SueTheView hashtag.