Iconic horror novelist and hard-Left pundit Stephen King once again signaled his Trump Derangement Syndrome with yet another rant about the 45th President and his supporters. In an interview with The Sunday Times, which is considered a Right-of-center publication, King went off on Trump in typical fashion, despite the former President being out of office for over a year and a half. 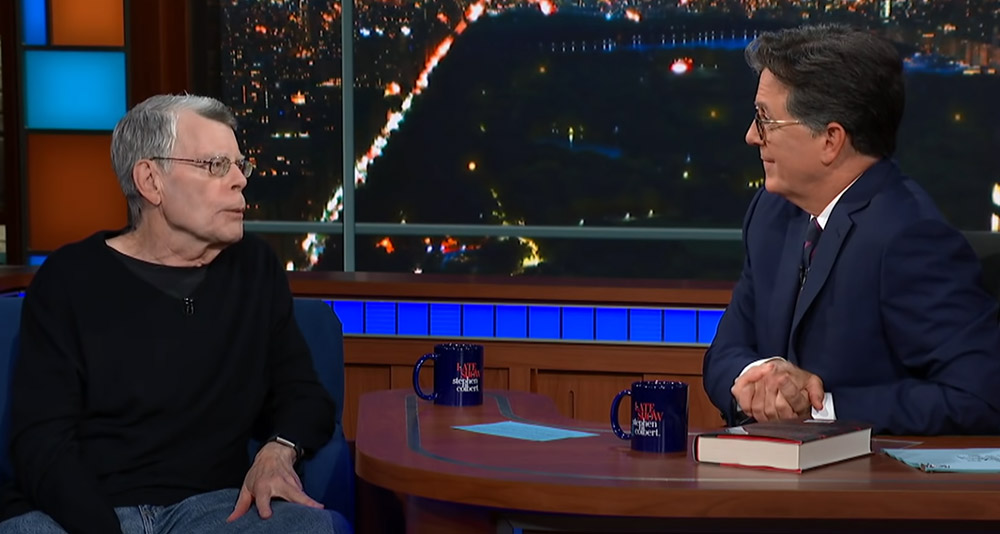 After dubbing Trump a “horrible person” to the surprise of no one, the author added “I think he actually engaged in criminal behavior and, certainly, I felt that he was a sociopath who tried to overturn the American democracy not out of any political wish of his own but because he could not admit that he had lost.”

This, of course, is speculative, and highly indicative of Left-wing hypocrisy on the issue of elections. Democrats railed against former President George W. Bush’s 2000 victory against Al Gore, claiming he had effectively stolen the election. A similar repeat occurred in 2016 when Donald Trump took the Presidency, prompting Democrats and Left-wingers to once again claim the election was stolen. 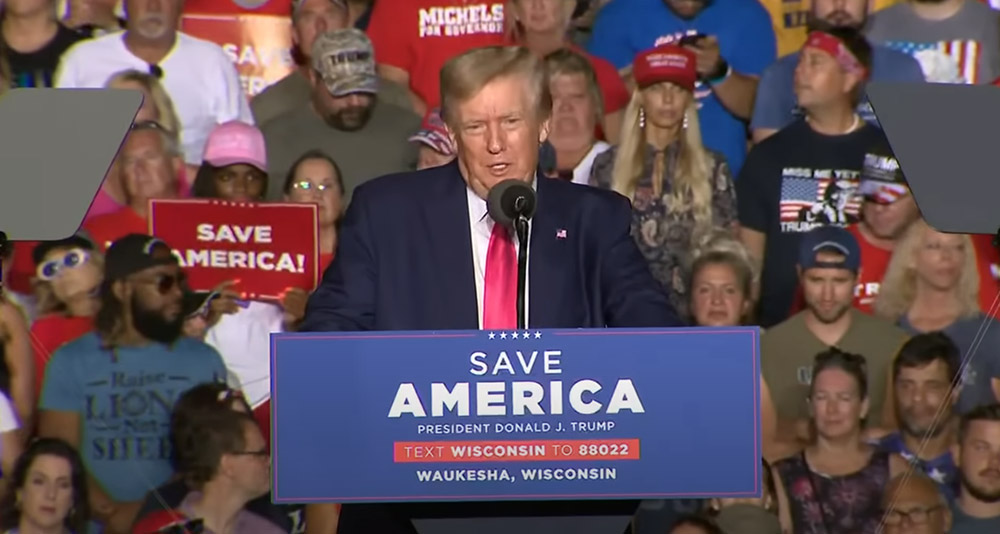 King, like many Leftists, can’t seem to grasp the irony of their own hypocrisy long enough to put two and two together.

The author continued his rant by switching his attention to Trump supporters, this time taking an olive branch approach. “I do understand that a guy driving a pickup truck covered with Trump and NRA stickers — you know, take my rifle when you pry it from my cold, dead fingers — would stop and pick up a stranger if he was in a rainstorm and say: ‘Where you going, buddy?’” 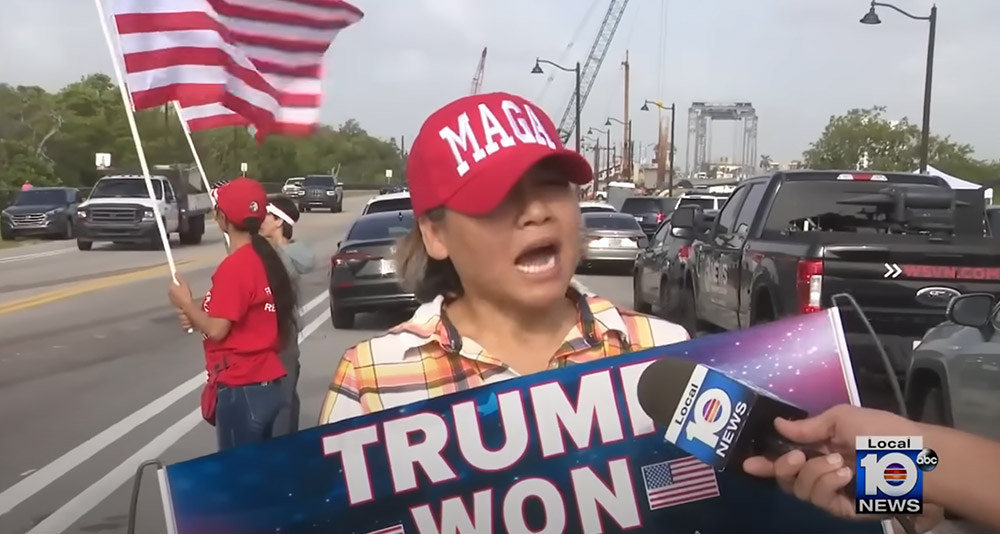 He goes on to add “That guy might go out of his way to take him there because people as individuals are good. I think sometimes when they get to be a political group that can be a problem.”

King isn’t wrong, and it’s refreshing to see a far-Leftist of his stature admit the obvious. Unfortunately, the vast majority of Leftists do not actually believe this, and routinely commit to the practice of demonizing the Right with character assassination attacks, smears, misinformation and blatant, bold-faced lies. 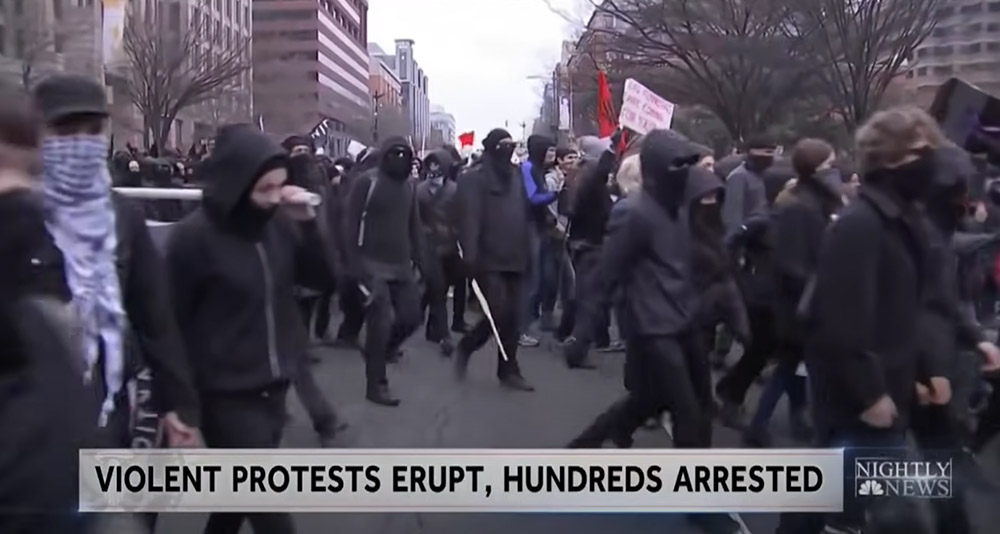 A 2021 polled conducted by Echelon Insights backs this up with hard and conclusive data focusing on the issues that are of most concern to Democrat and Republican voters. The poll showed that Republicans believed the biggest threats to the country were high taxes (77%), demonization of police (79%) and illegal immigration (81%)

By contrast, Democrat voters believed the biggest threats were systemic racism (77%), white nationalism (79%) and supporters of Donald Trump (82%). Clearly, the disconnect is real, driven by cognitive dissonance on behalf of the political Left-wing who have been indoctrinated into a culture of rampant fear, paranoia and seething hatred for ideological opponents. 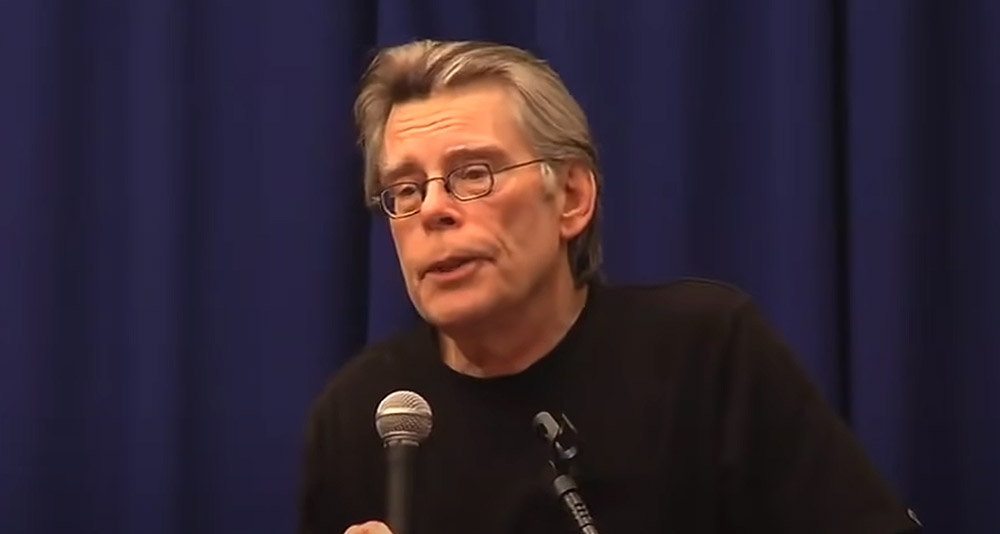 Stephen King, to his credit, admits that he doesn’t see Right-wingers the same as most. “There is a strong right wing, a political right wing in America, and they have a megaphone in some of the media,” he began, before adding “They’re not fascists but they’re hard right-wingers. They’re certainly climate change deniers, so that is a real problem.”

Aside from the lie tacked on at the end, King deserves at least some kudos for stating the obvious, if his comment is actually sincere. His hatred for Trump, however, has not abated. He claimed he believed the former President was a “criminal,” despite presenting no evidence or a congruent, logical argument to back up his case.

It’s not the first time he’s said outlandish things about the former President. In May of 2017, King tweeted out that he believed Trump had “narcissistic personality disorder.” 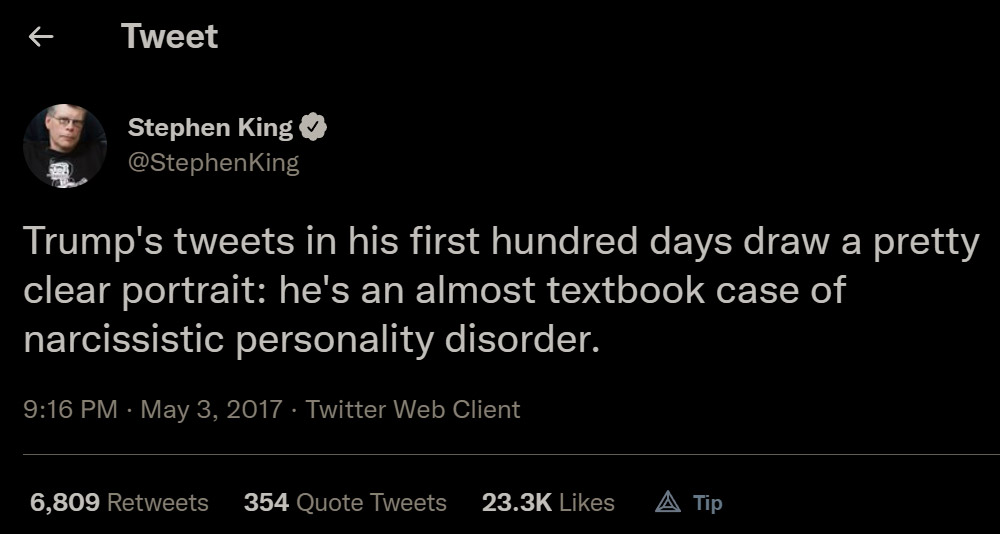 He also insinuated that Trump was too unstable to have any access whatsoever to America’s nuclear weapons arsenal, claiming the very thought was “worse than any horror story I ever wrote.” 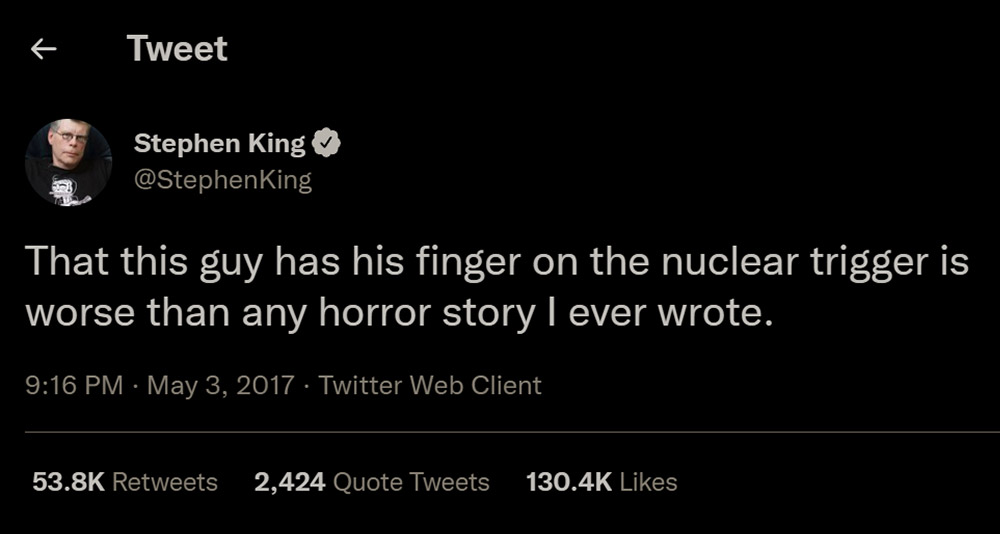 Of course, foreign policy and the advancement of America’s military were two of Donald Trump’s highest points while in office, and helped quell threats and attacks from geopolitical foes such as Iran, North Korea, the Taliban, Russia, and even China. By mimicking Ronald Reagan’s tough-as-nails foreign policy, Trump paved the path towards the signing of the monumentally historic Abraham Accords in 2020, which stand to this day.

While King’s criticism of Donald Trump’s personal character foibles are not without merit, the subjective lunacy of his past insinuations has been mainstreamed across Left-wing culture from top to bottom. If the aforementioned Echelon Insights poll is any indicator, the Left must be quaking in their boots over the possibility that he runs in the 2024 election. 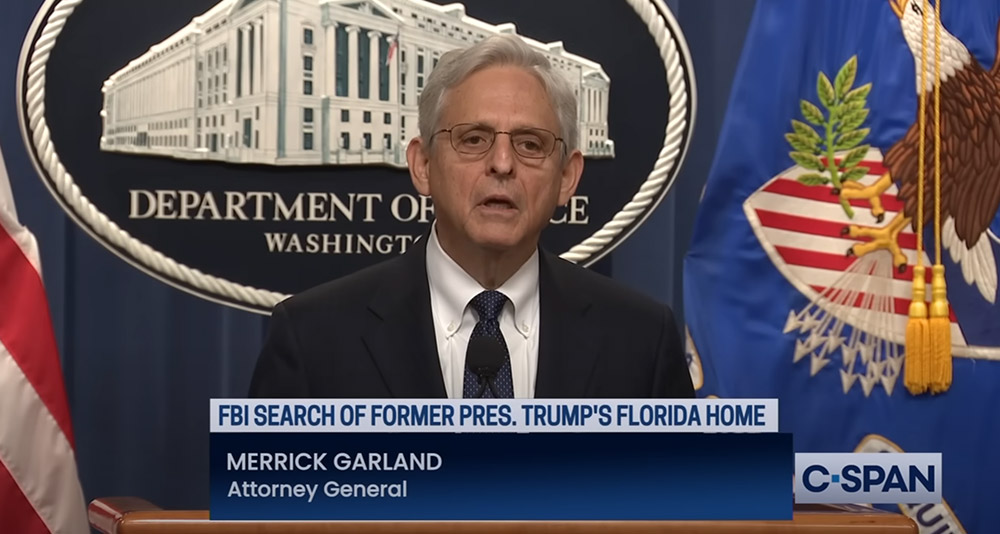 There’s merit to the argument as well, specifically the recent FBI raid of Trump’s residence at Mar-a-Lago, which has backfired in horrific fashion. According to a Rasmussen poll, DOJ head Merrick Garland’s favorability rating now stands at a measly 36%, and trust in the FBI has plunged to 46%, with a 47% unfavorable rating.

As the vultures circle around an almost-definitive midterm bloodbath for Democrats, all eyes will shift to the 2024 race. If Stephen King and his fellow Left-wingers keep clinging on to their obsession with Trump, they will turn up the temperature with more brazen actions, alienating more voters in the process, while continuing to undermine trust in all of America’s major institutions. 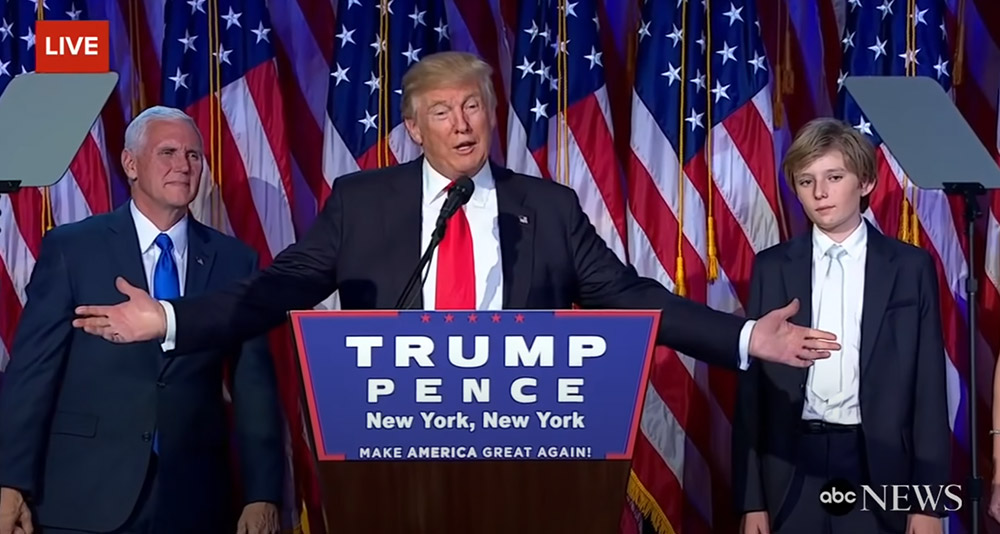 Which, ironically, is how Trump got elected in 2016. Democrats, it seems, have difficulty learning from their own past mistakes.