Cyberfrog creator and former DC Comics artist Ethan Van Sciver predicted again that DC Comics will be shut down and it’s only a matter of time. 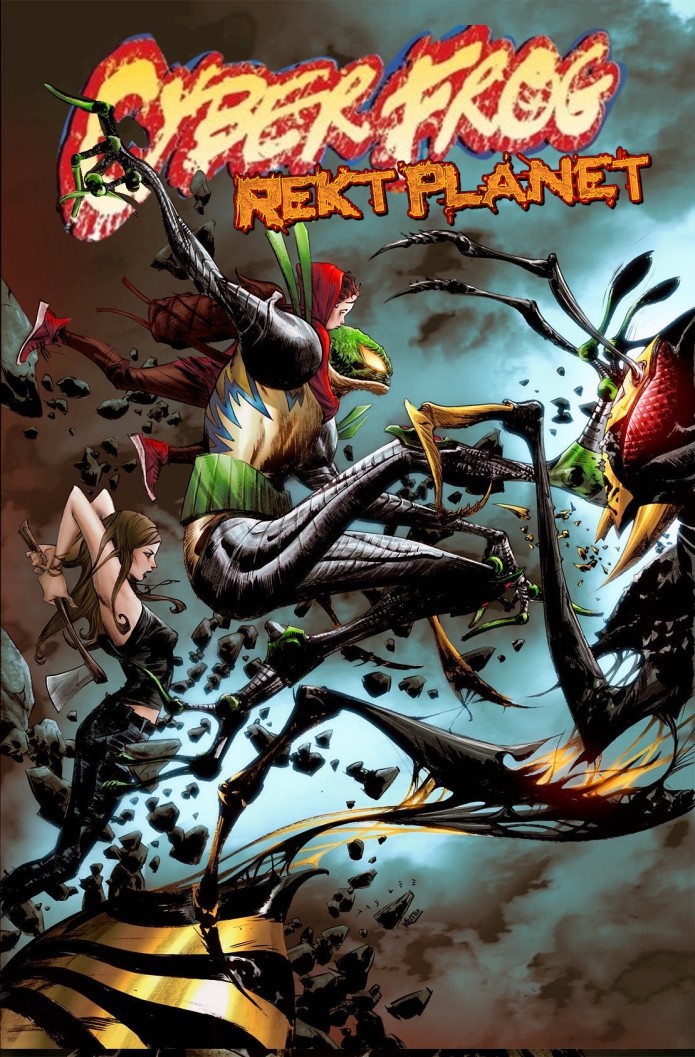 Van Sciver’s latest prediction came in response to a Twitter user describing him as a “dummy” for pointing out that DC Comics and Marvel Comics injection of wokeness and identity politics has killed their sales.

Van Sciver wrote on Twitter, “The problem is that comics don’t make enough money for their parent companies vs. the manpower the publishing houses require.”

He added, “The corps only care about the IPs. At first, comics compensated for this by claiming to be necessary as cheap creative research and development.” 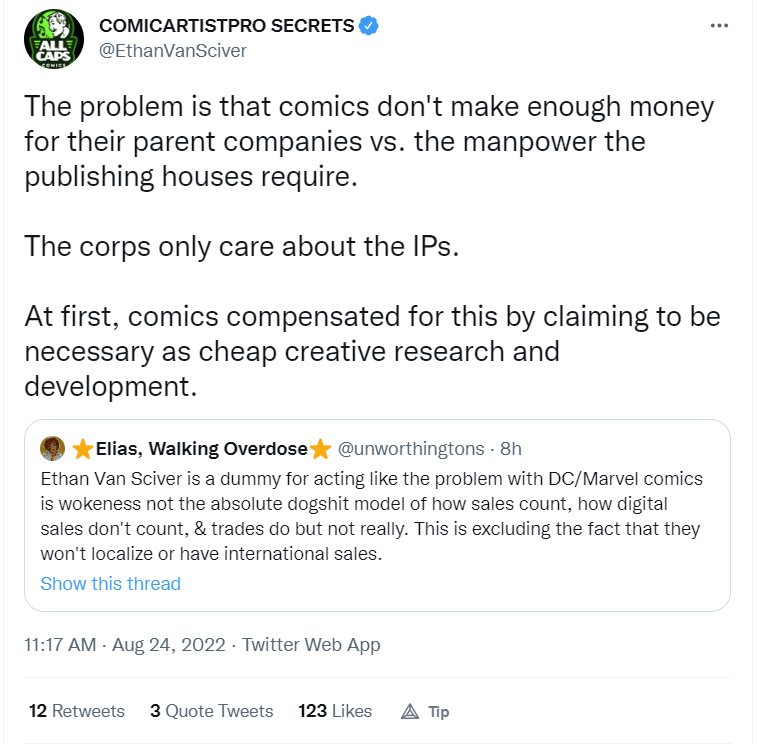 Van Sciver continued the thread, “But it soon became clear that ‘Hollywood’ could build off of what’s already been created and generate BETTER Batman stories than DC Comics creators could.”

“Marvel and DC pivoted to become Woke Propaganda for their parent companies, for tax credits and ESG. Sales tanked hard,” he asserted. 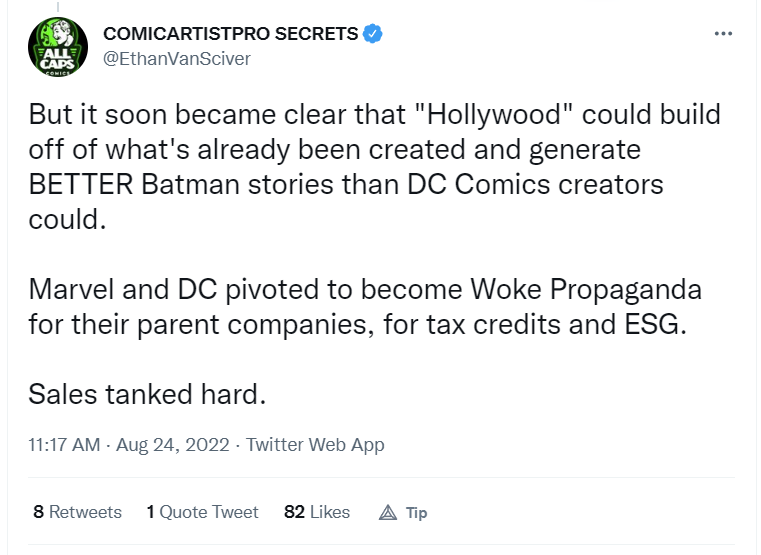 Next, he tweeted, “Turns out, most people don’t want to read comics if they’re poisoned with Social Justice.”

“Now it’s only a matter of time for DC Comics,” he predicted their demise. “Marvel Comics is healthier, but Disney doesn’t need them either. When DC Comics closes, they’ll go pretty quickly thereafter.” 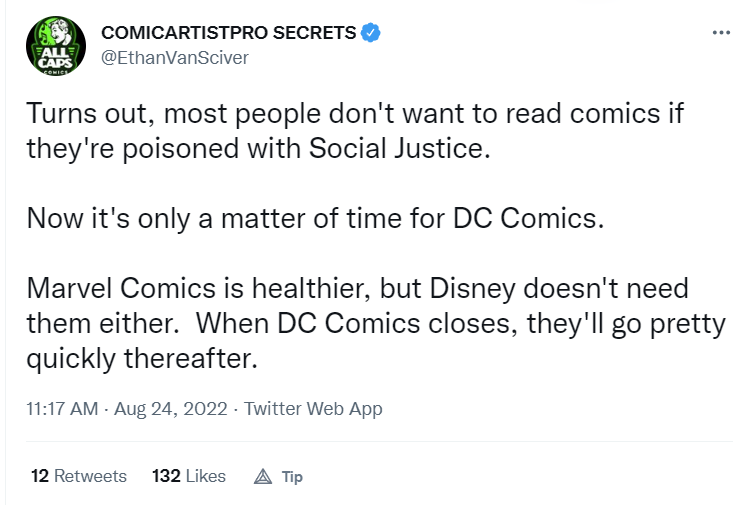 Finally, he concluded the thread writing, “BTW, I’ve read the OP a dozen times…is she suggesting that the problem is that we don’t have an accurate count of comics sales?”

“How is that a problem shared by Disney or WBD, dingbat? They know what the books are selling and grossing, even if you don’t,” he bluntly stated. 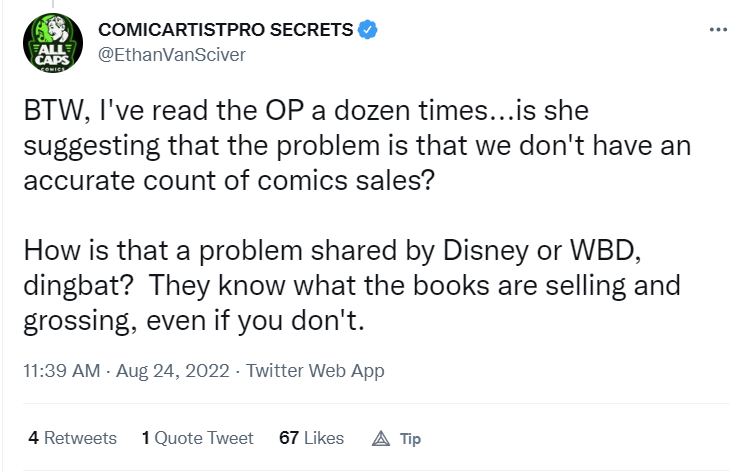 RELATED: Nicole Maines Says Upcoming Introduction Of Her Transgender Arrowverse Hero Dreamer In DC Comics Canon Is Needed “To Give Queer Children A Superhero Who Will Fight For Them”

This isn’t the first time Van Sciver has predicted that DC Comics will eventually be shut down. Back in 2019, he speculated that AT&T would scrap the company detailing in a YouTube video, ” kind of feel like AT&T is going to consider divesting DC Comics. That’s what I think is going to happen. I think there is going to be a lot of pressure to do so. That’s a lot of debt.”

At the end of 2020, Van Sciver also noted in a YouTube video that he “received a tip, by the way, an unverifiable tip, I gotta say, I don’t know if it’s true or not, but they are saying DC Comics will close down publishing paper comics in June of 2021.”

“I think they just solicited March’s comics, and I guess that, if this is true, that’s going to be it,” he added.

RELATED: DC Website Drops “Comics” Designation From Its Branding In A Sign That Suggests The Company Could Be Moving Away From Publishing

Clearly, that alleged insider’s information was wrong as DC Comics is still printing paper comics. However, the idea that DC Comics will eventually be shut down is still not out of the question, and seemingly gained steam after DC announced they were dropping the “Comics” portion of their name from their website.

DC announced in a press release they were changing the website’s url to just DC.com instead of DCComics.com stating, “DC today unveiled its fan focused portal at DC.com, which will give fans easy access to all things DC, from fan-first news to DC UNIVERSE INFINITE, DC Shop, DC Community and DC on HBO Max.” 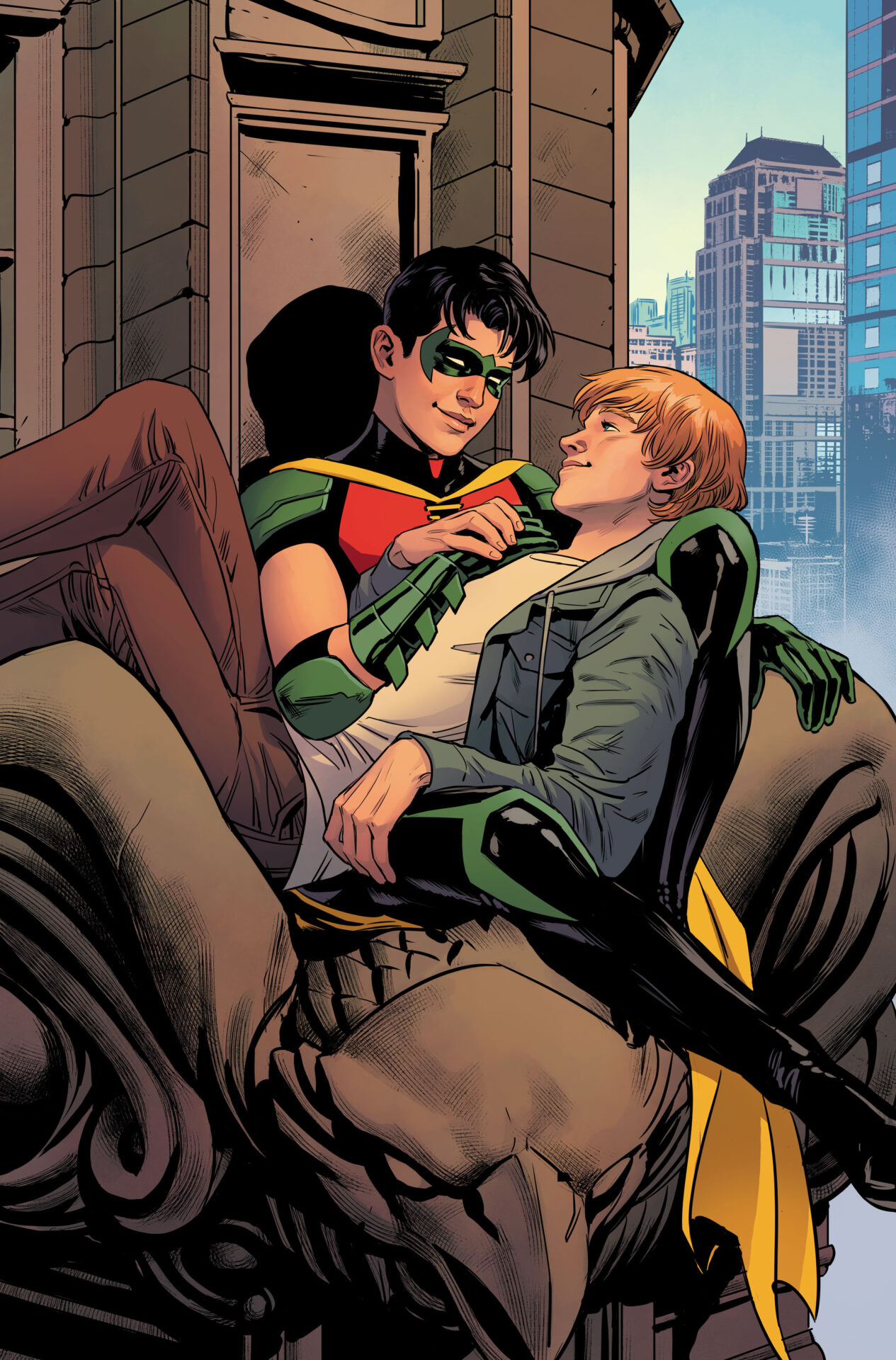 The press release does note, “DC.com will continue to be the home for breaking news and deep dives on the latest DC releases across comic books, film, TV, video games – all in one place!”

“DC.com will expand to include weekly video content ranging from trailers for upcoming releases to look backs at some of DC’s defining moments across all mediums, plus exclusive talent interviews that you won’t be able to find anywhere else,” it added. 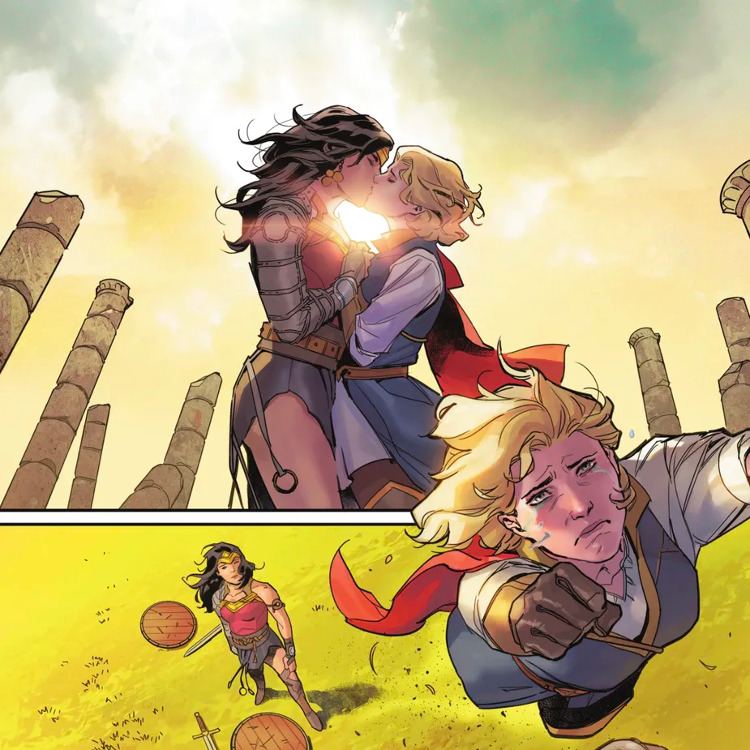 DC GM/SVP Anne DePies also said, “DC.com is a celebration of everything across the DC Multiverse and we couldn’t be more excited for today’s launch.”

“We are doubling down on DC’s digital ecosystem and there has never been a better time to be a DC fan and with this one stop shop, we’re bringing everything together in one place to easily access and celebrate your fandom,” she added. 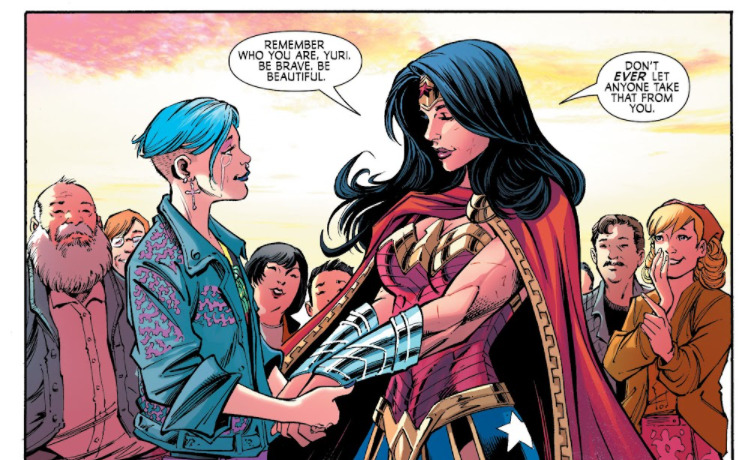 On top of their website dropping comics, David Zaslav and his new management team at Warner Bros. Discovery have been axing numerous DC projects and also sold a majority of The CW Network to Nexstar.

DC film and TV projects that were cancelled under the new regime include Batgirl, Batwoman, Naomi, The Flash, DC’s Legends of Tomorrow, Strange Adventures, and Wonder Twins. It’s also been reported that the J.J. Abrams produced Batman: Caped Crusader animated series is not moving forward at HBO Max although it’s being shopped to other networks. 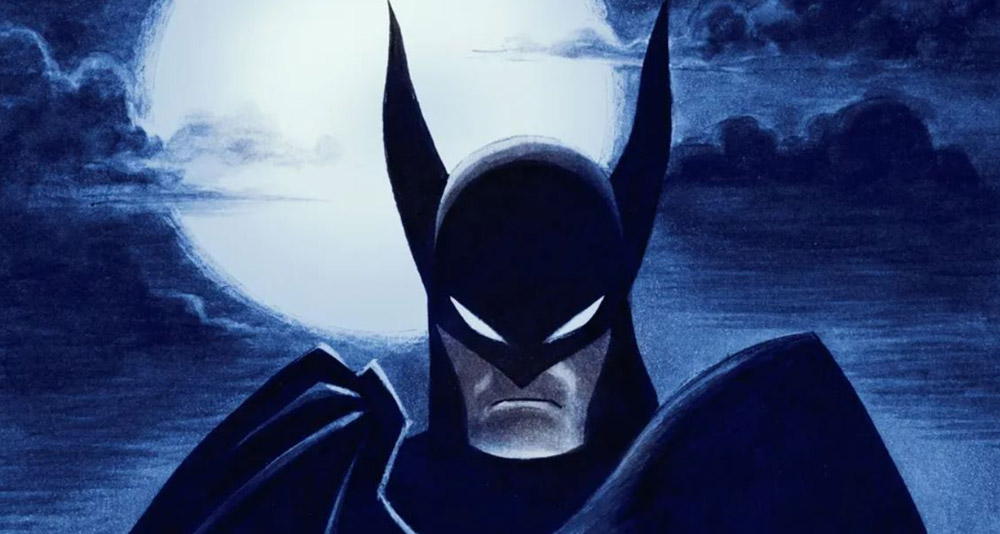 What do you make of Ethan Van Sciver’s prediction that DC Comics will be shut down and it’s only a matter of time? If you believe the prediction when do you think it might get shut down?