Frogwares has advertised their Sherlock Holmes The Awakened Kickstarter by letting fans write messages on artillery shells in the ongoing conflict between Russia and Ukraine.

Amid the western gaming industry’s condemnation of the Russian invasion of Ukraine — along with the western entertainment industry —Frogwares was one of the developers directly affected by the invasion. The Ukrainian developer announced in April that the Xbox One version of Sherlock Holmes Chapter One had been indefinitely postponed due to the war.

Frogwares hasn’t shied-away from the issues they are suffering, with their Kickstarter for Sherlock Holmes The Awakened proudly stating the game is being “Developed in Ukraine during the Russian invasion.”

The great detective faces off against a Cthulhu worshiping cult, where deductive gameplay is combined with insanity-driven puzzles that encourage abnormal solutions. It promises to be a total remake of Frogwares’ 2006 eponymously named video game; rewritten and now set after the events of Chapter One as one of the first cases Holmes works alongside Dr. John Watson. 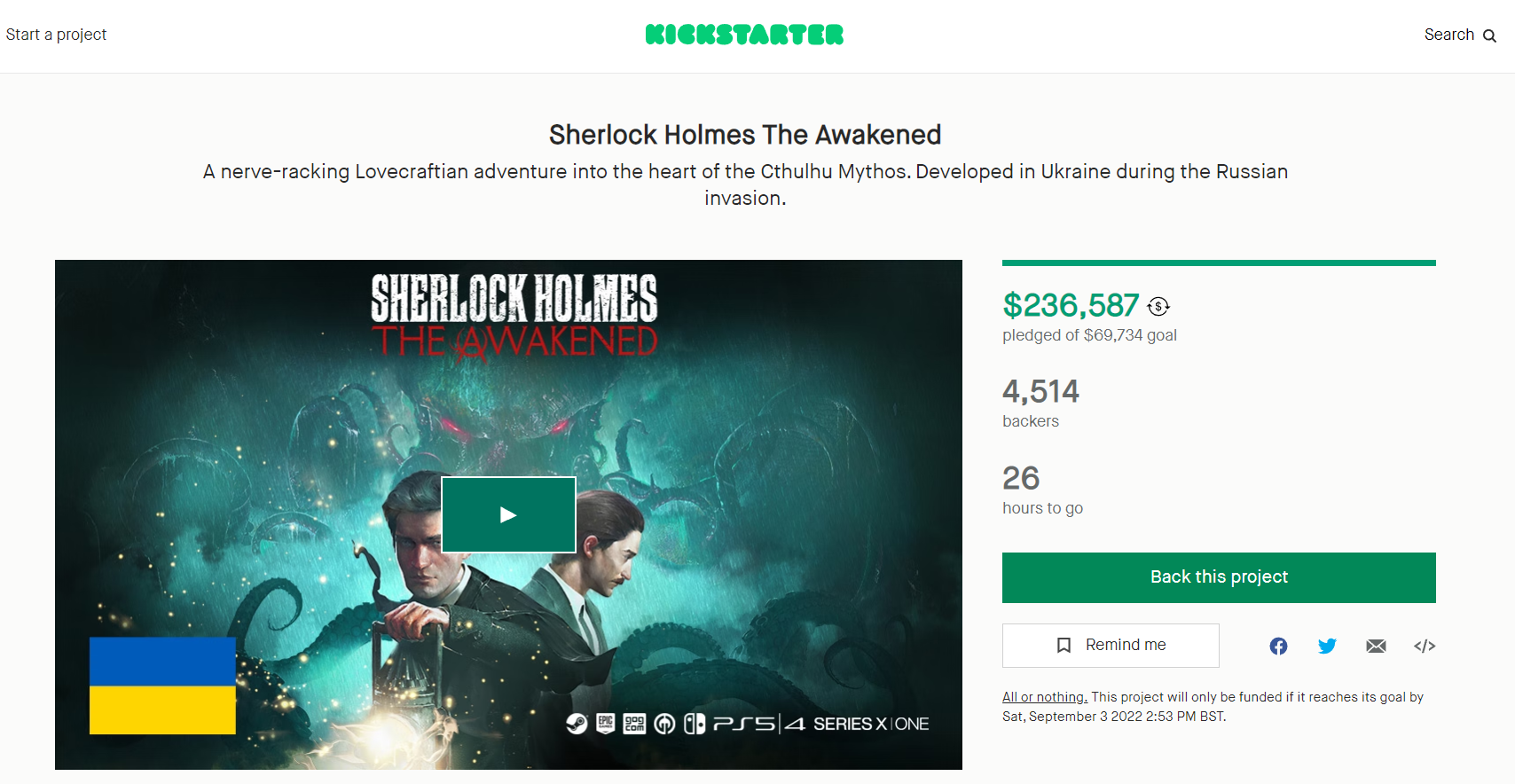 VGC reports that not only did it meet its €70,000 EUR goal within 48 hours (Just shy of $70,000 USD) but all stretch goals have been met. All funds over €215,000 EUR “will be used to strengthen our safety net and further secure the future of our studio and our team members.” The Kickstarter has raised over €237,000 EUR at this time of writing.

The Kickstarter does features some atypical marketing stunts in the form of messages on mortar shells. “A few days till Sherlock Holmes The Awakened Kickstarter ends,” Frogwares warned. “To help out, our friends in the 24th Separate Assault Battalion will write a custom msg of your choice on 152mm howitzer shell. Just [like] and [retweet] this tweet and we’ll pick 3 random winners.”

A soldier of the 24th Separate Assault Battalion states in the accompanying video, “Hi everyone, if you’d like your custom message written on an artillery shell, and help our friends at Frogwares at the same time, please get involved. And we look forward to sending these special deliveries, to our unwanted guests.”

A few days till Sherlock Holmes The Awakened Kickstarter ends.

To help out, our friends in the 24th Separate Assault Battalion will write a custom msg of your choice on 152mm howitzer shell. Just ♥️ and 🔁this tweet and we'll pick 3 random winners.🧵 pic.twitter.com/SP91PccYaq

Frogwares elaborated that the message can be anything fans want — pending the approval of the team — with winners getting a photo of their shell presented by the troops. Replies to the tweet showed a mix of support, suggested messages, and concerns about associating the war with the game being dividing or crude.

“We have released 20+ titles over the years but the Russian invasion of our homeland Ukraine has thrown up one of the toughest production challenges we’ve ever faced,” Frogwares stated on Kickstarter. “As this war has no foreseeable end in sight, we are now working around this new reality of ours.”

“For those of us on the team not serving in the military or with various humanitarian aid organizations, the only way we can fight back is by keeping our team creating. For normal citizens like us, our most potent weapon right now against the Russians is being able to keep Ukrainian society and our economy alive. A functioning country is one that can resist, fight back, and finally, rebuild,” Frogwares hope.

The Risks and challenges section — as found in most Kickstarter project pages — features the hefty understatement: “The war is our biggest risk and challenge. But we are an established team who since our formation in 2000 have put out 20+ games and are fully independent.”

Frogwares admit they would typically secure funding from prior sales but “this war is continually throwing new challenges at us that each time requires we stop, regroup and adapt. This takes time, effort, and in many cases money that was normally set aside to fund the production of the game. This is why we have chosen to run a crowdfunding campaign.”

The Ukrainian developer assures that “the bulk of the content, new features, and storyline all mapped out and locked in,” unlike typical game development. Nonetheless, the game needs new voice acting to be recorded, translation, QA described as “extensive” to bring the game to five different platforms, and additional features and mechanics via stretch goals. A purely digital release has also removed other pitfalls.

Funding would help Frogwares “have the guaranteed means to finish the game and handle any hurdles we could face as this war evolves. This safety net will allow us to put our team’s needs and safety first as we adapt further without derailing the entire development and funding. The funding through Kickstarter is in essence our best bet right now to mitigate our biggest risks.”

In a recent YouTube video, Frogwares revealed their developers were not only scattered across the European Union due to the invasion but several were also actively serving in the Ukraine armed forces.