How to Blow Up a Pipeline is a movie one media outlet described as an “eco-terrorist thriller,” where the protagonists are the ones who are trying to blow up a pipeline. Respectable People are praising it, and the director even said that someone “who’s very high up in counterterrorism in the United States military” helped with the film. 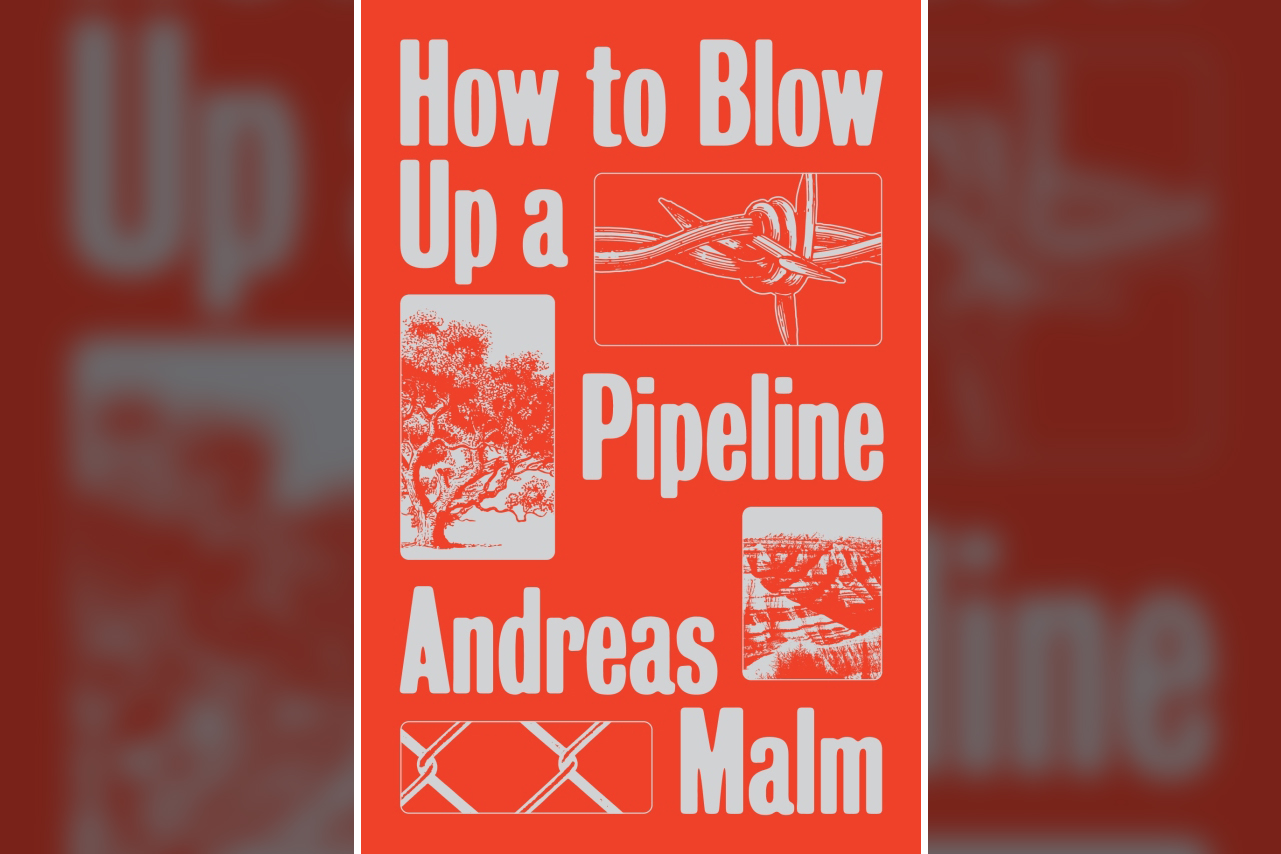 Source: ‘How to Blow Up a Pipeline’ by Andreas Malm, Book Cover

On Sep. 13, The Hollywood Reporter reported that movie distributor Neon acquired the “eco-terrorist thriller” from director Daniel Goldhaber after it had been featured at the Toronto International Film Festival. The movie is a fictional story based on Andreas Malm’s nonfiction book of the same name.

THR summarized the film as being about “a crew of young environmental activists who execute a daring mission to sabotage an oil pipeline.” It added that it’s a “part high-stakes heist, part radical exploration of direct action as climate activism.” 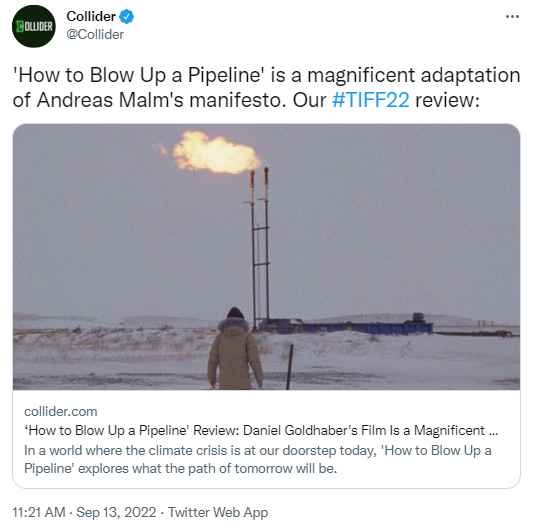 And while the author of that particular article didn’t offer much in the way of commentary on the movie, other people elsewhere did. And they have positive things to say about it.

Meanwhile, Slash Film went with: “How To Blow Up A Pipeline Review: A Startling And White Knuckle-Inducing Visual Manifesto [TIFF].” 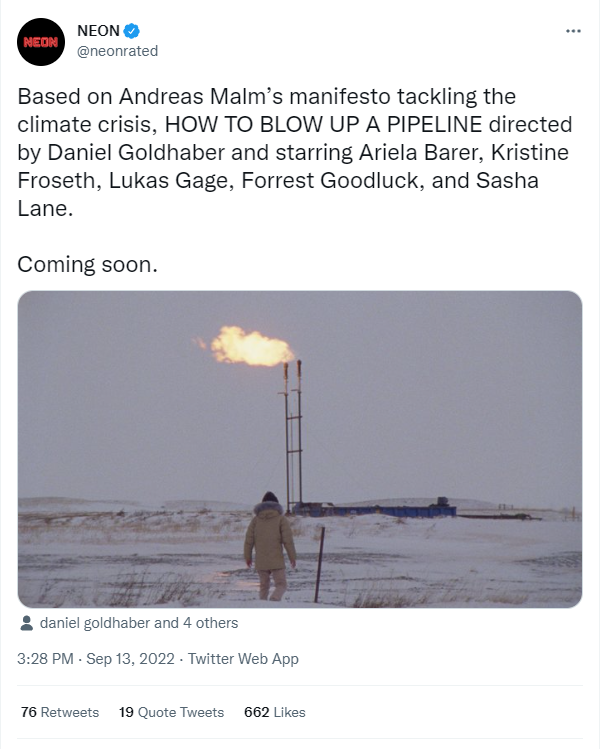 Twitter Blue Checks have had positive things to say about the film as well.

One wrote, “a very big hell f***ing yeah to the cast and crew of one of the best films i’ve seen in ages: HOW TO BLOW UP A PIPELINE.” 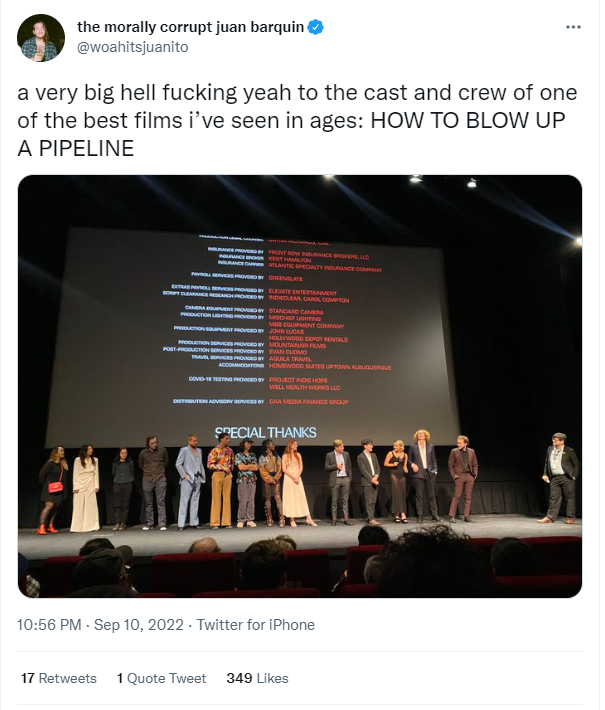 Another tweeted, “HOW TO BLOW UP A PIPELINE is the real s**t, easily the most exciting film I’ve seen for TIFF this year — bona fide thought-through revolutionary ideology packaged as a gratuitously entertaining capital-M Movie. Big glorious feature with Daniel Goldhaber coming on Monday.” 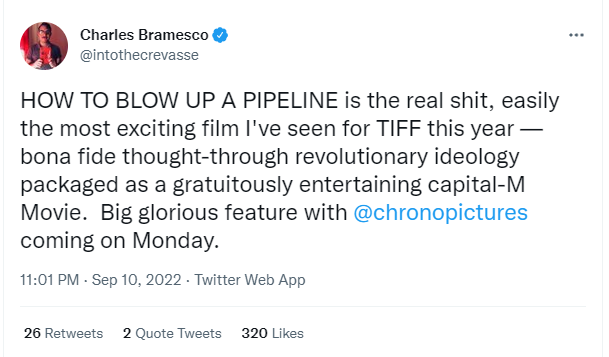 Edward Ongweso Jr. shared his thoughts writing, “I reviewed HOW TO BLOW UP A PIPELINE! The best movie I’ve seen this year, one of the best I’ve seen in a long time, a great adaptation of a great book. Both are calls to action that fill my chest with hope and I hope everyone who sees it feels the same!” 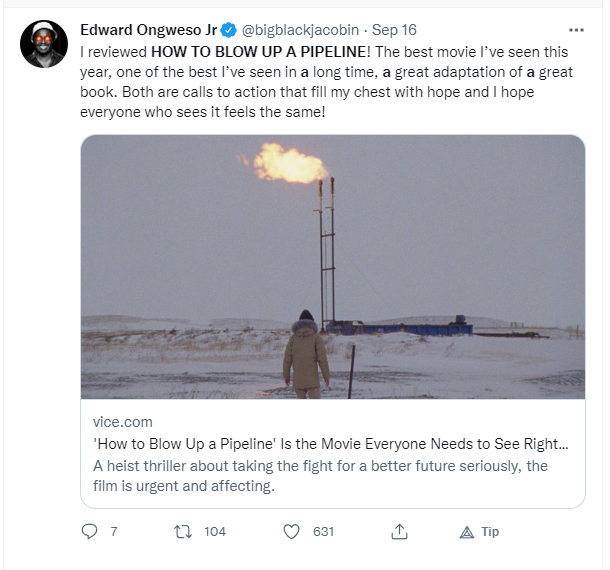 Katie Rife tweeted, “Well, put me on the (green) bandwagon for How To Blow Up A Pipeline. Nonstop tension, provocative ideas, and riveting performances make Daniel Goldhaber’s followup to Cam the must-see thriller of the fall.”

Beyond these praises from mainstream sources, the director of the movie (the aforementioned Daniel Goldhaber) said on video that someone within the U.S. armed forces provided assistance with the film. “There is a technical advisor, credited as anonymous, who’s somebody who’s very high up in counterterrorism in the United States military.”

Here’s a snippet from the Q&A where this is mentioned. https://t.co/xHzkDCO1A8 pic.twitter.com/hE4wCaQUqo

Goldhaber continued, “He requested to remain anonymous but who we worked with [sic] both to get everything accurate and also to make sure that we weren’t doing anything dangerous by putting anything in the movie; it was kind of both things.”

Did a government official really work on this film? Doesn’t it seem like someone ought to check on that?

People might argue that Goldhaber mentioned something that sounds like the advisor was supposedly trying to keep things safe. Maybe—a lot of what he says in the sound bite is unclear in meaning.

Or maybe the entire video adds further context to what Goldhaber meant. (Except for it doesn’t; I forced myself to sit through the whole thing).

Ultimately, though, what Goldhaber said about having a military counterterrorism advisor on an “eco-terrorist thriller” is entirely irrelevant because nothing will come of it. No one is going to care about it and I’m certainly not going to waste time raging about it.

After all, none of this is controversial to those who rule us. Everything about the movie is perfectly fine with them, or even outright laudable.

Malm’s nonfiction book has fared just as well, with Respectable People treating it as legitimate and noteworthy. Vice published “The Limits of Peaceful Protest in a World That Is Burning” in September of last year.

The New York Times mentioned the book at least three times in 2021: once in January, once in July, and once in December. The July mention was an opinion piece by Ezra Klein titled, “It Seems Odd That We Would Just Let the World Burn.”

The New Republic devoted an article to it in May 2021. And The New Yorker covered it in a Sep. 2021 podcast.

As always, complaining about any of this is worthless. The only thing to do is to start writing stories that play by the same rules—with protagonists who act similarly but in service of an entirely opposite agenda.

Currently this is still an option. And so we might as well do so while we still can . . . even if we have no shot of getting American military counterterrorism officials to act as our technical advisors.