Former World of Warcraft team leader Mark Kern predicts Nvidia will have issues due to the pricing of its upcoming RTX 4000 series. 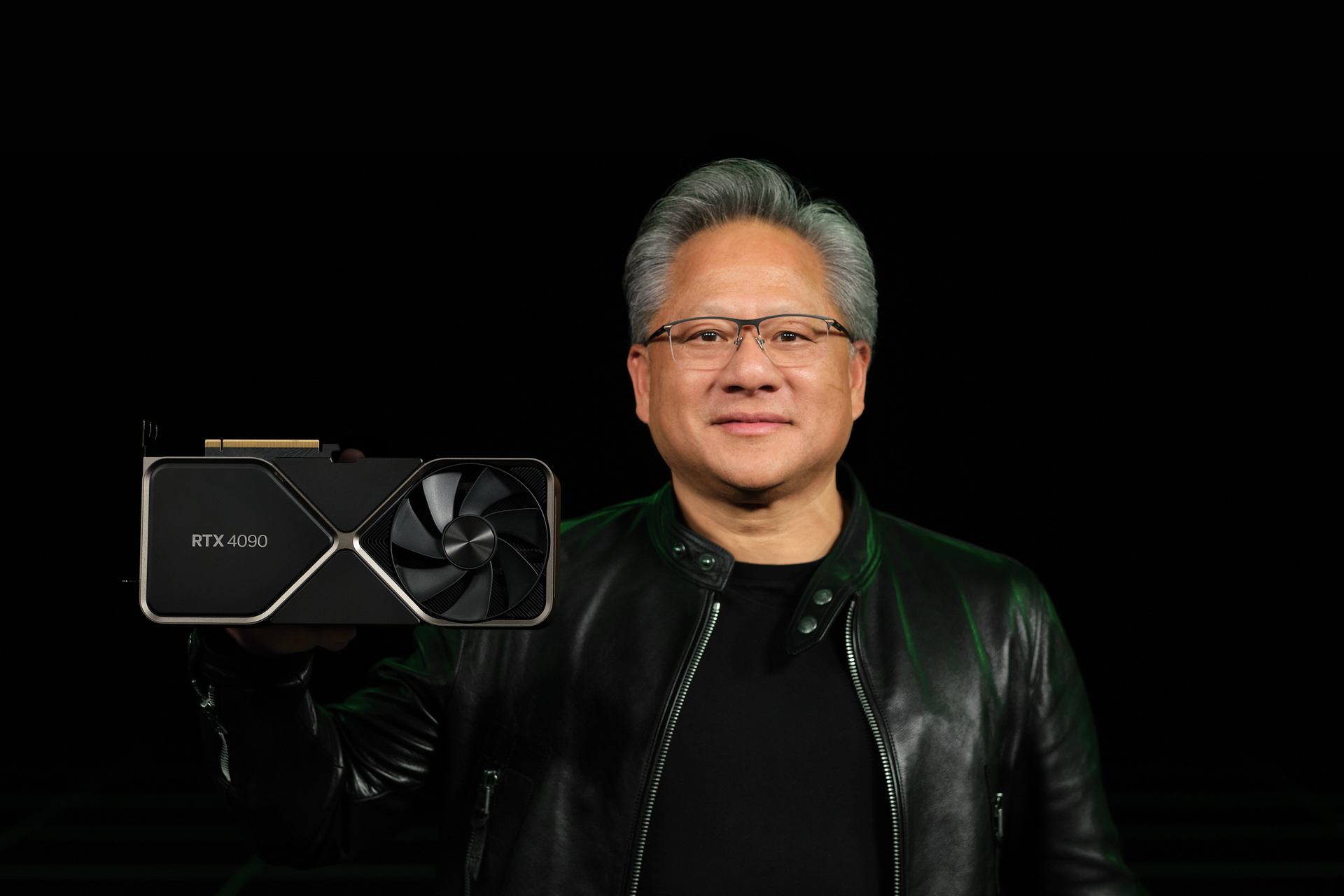 Graphic cards have seen a surge in prices over the last few years, with production not meeting demand. Things are seeming to calm down, however. 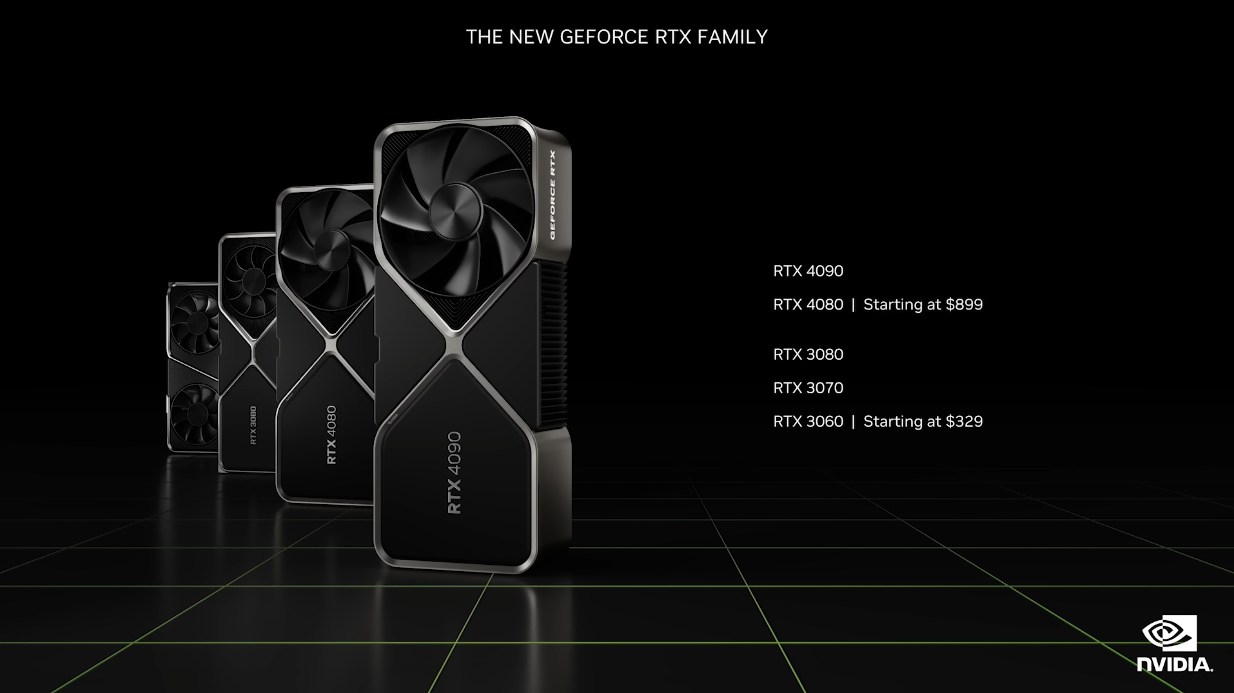 It seems some have objected to their price however. Kotaku ran the news with the headline “Nvidia’s New 4000-Series PC Graphics Cards Are Too Damn Expensive,” citing discussions on social media in which users lamented the price and felt the increased specifications didn’t justify it.

“They are trying to sell you a 4070 rebranded as a 4080 for 900$,” one Reddit user mocked discussing the 12GB card. In addition, prior allegations Nvidia had sold a graphics card with worse specifications than specified and settling a false advertising class action lawsuit has continued to haunt them to this day.

The “GTC Sept 2022 Keynote with NVIDIA CEO Jensen Huang” presentation, where the prices were revealed, also saw some backlash. Using third-party plug-ins, we see the video has been disliked 44,000 times. In contrast, the video was given a thumbs up by 63,000 YouTube users as of this writing. 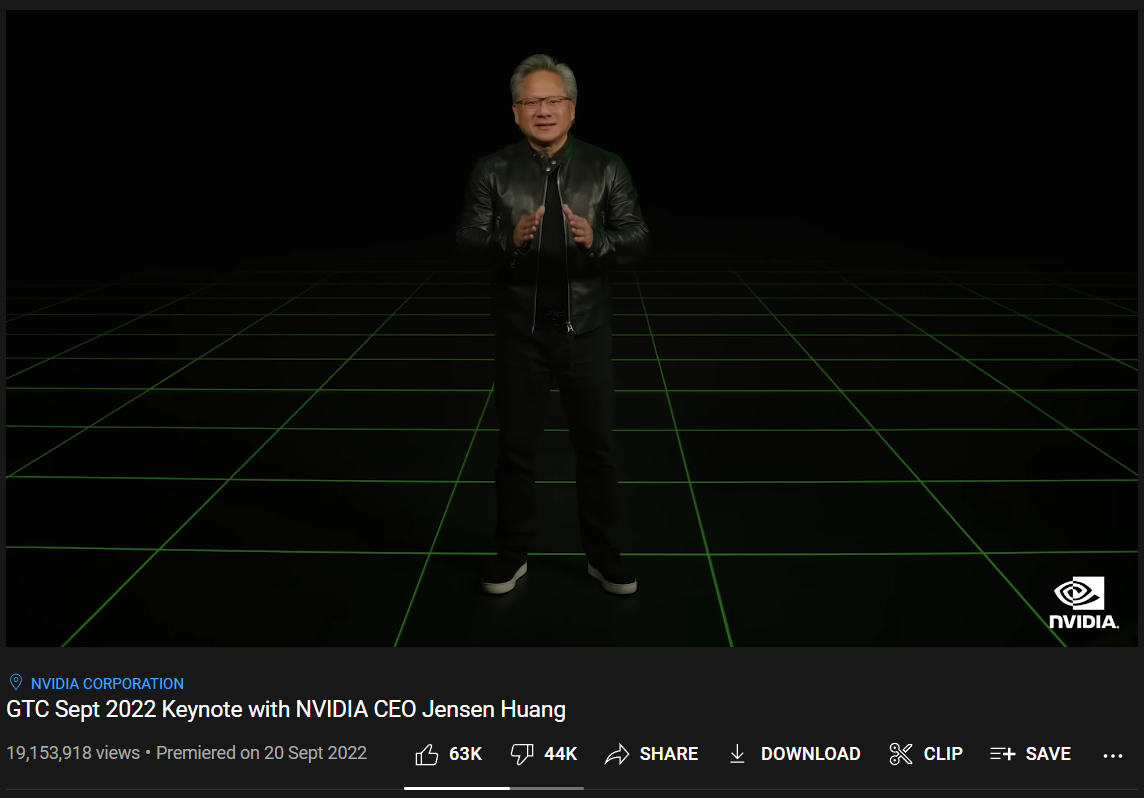 Some on social media have already theorized the pricing won’t be kept for very long, citing such factor’s as AMD’s upcoming RDNA 3. Another of these dissenting voices is Mark Kern, former Team Lead of Blizzard Entertainment’s World of Warcraft, founder of Red 5 Studios and EM-8ER. 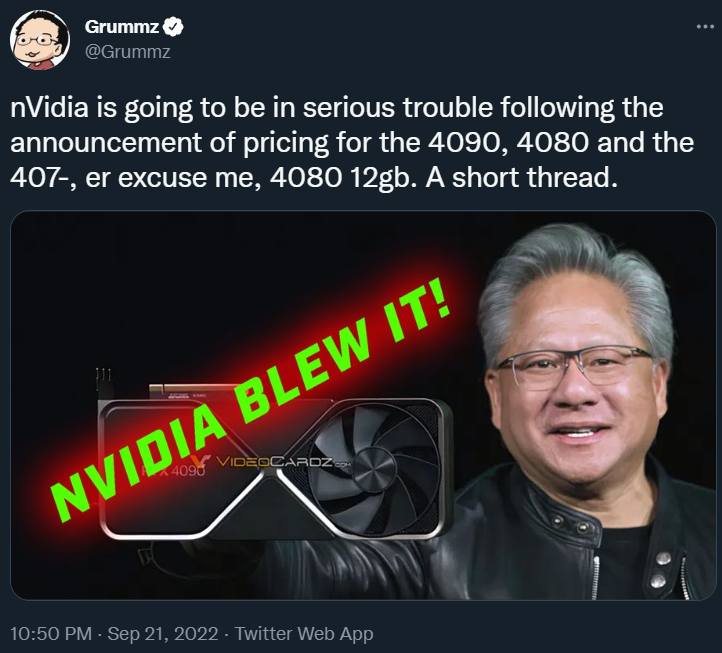 “The new cards are seriously overpriced and tone deaf to the current state of the world economy. nVidia is deluded, believing that the 2x prices people paid for GPUs from the boom years of The Very Bad Thing That Happened are real, when they are very very not real,” he pointed out. 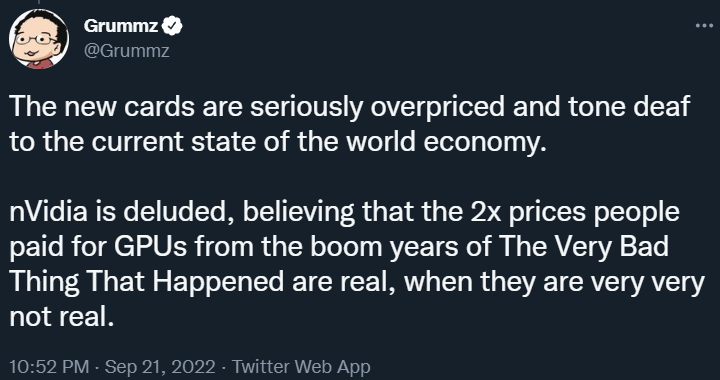 “The prices of GPUs and and the 3000 series cards were boosted artificially by several factors and are not at all present today. First is the supply chain issues that wracked the world, making availability a tough thing, driving prices higher as shipping costs soared.” The video game designer illustrated this point with a shot of the Evergreen blocking the Suez Canal in 2021, blocking $9.6 billion in trade daily. 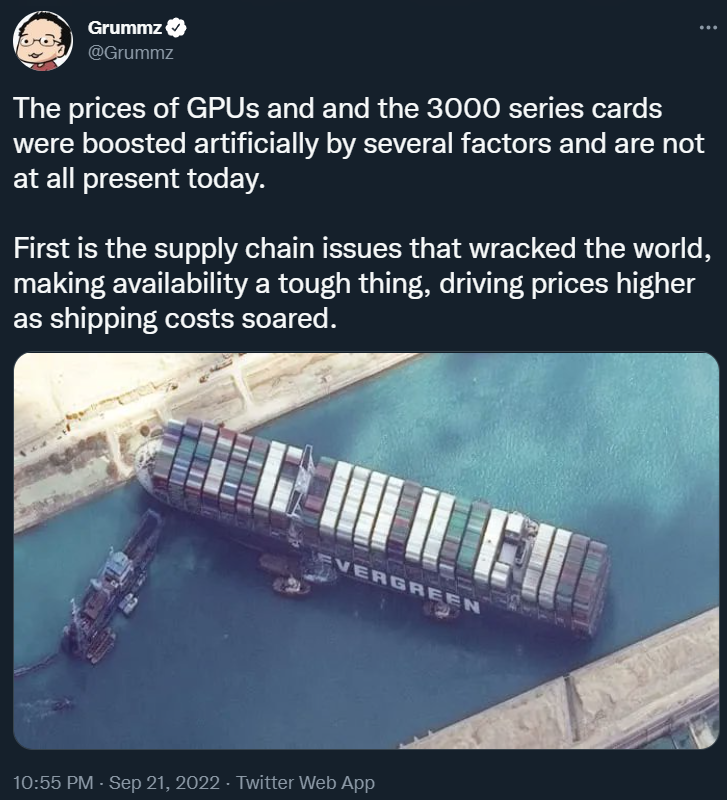 “Demand was high because people were stuck at home in lockdown, and gaming exploded as a way to pass the time. People built new PCs, which doubled as work at home machines, justifying higher prices as the machines did double duty for work and play.”

“Then there were the Crypto-Bros. Etherium prices shot through the roof, making GPU mining very profitable. As much as nVidia denied it, cards were going to miners first instead of gamers,” Kern claimed. “And miners were willing to pay 2x MSRP for these cards because mining made bank at the time.” 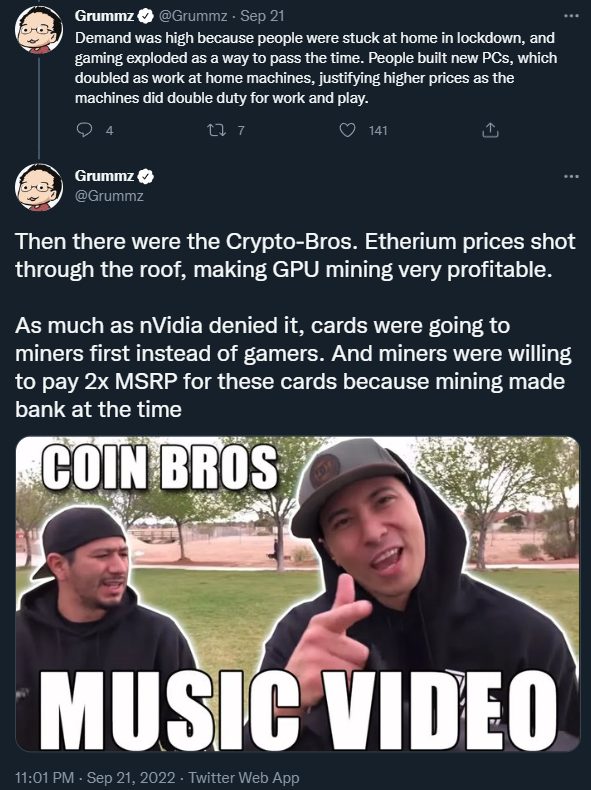 “If you were a regular gamer, you had an additional incentive to pay more than MSRP for a graphics card. Free money.” Kern reminded his followers how “All around the world, governments were subsidizing lockdowns in some way or another. Here in the US, we printed checks and sent them to everyone.” 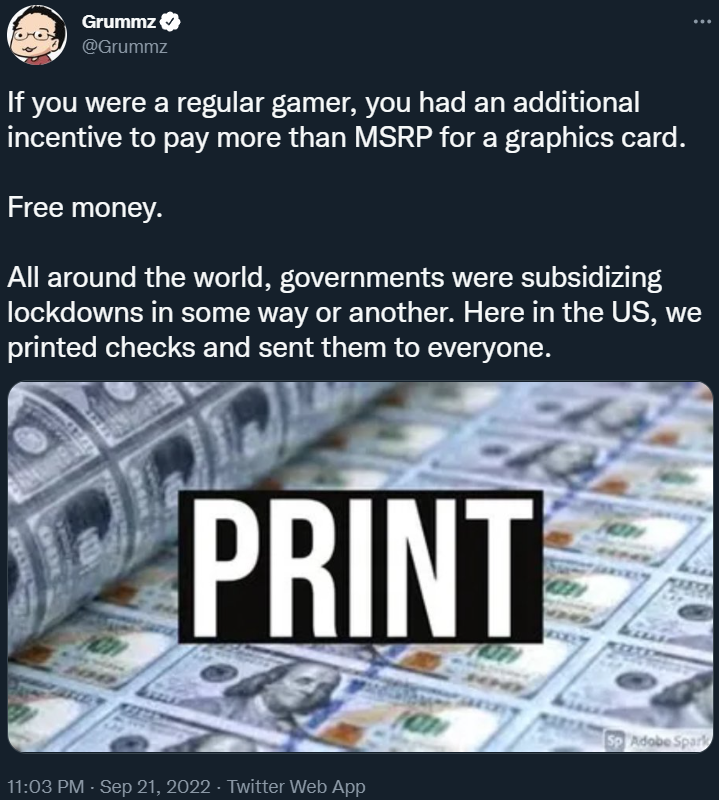 “So free money, supply issues, lockdowns, and huge crypto gains were all factors that allowed people to pay DOUBLE or TRIPLE for high end GPUs. But where are those factors now?” he asked. 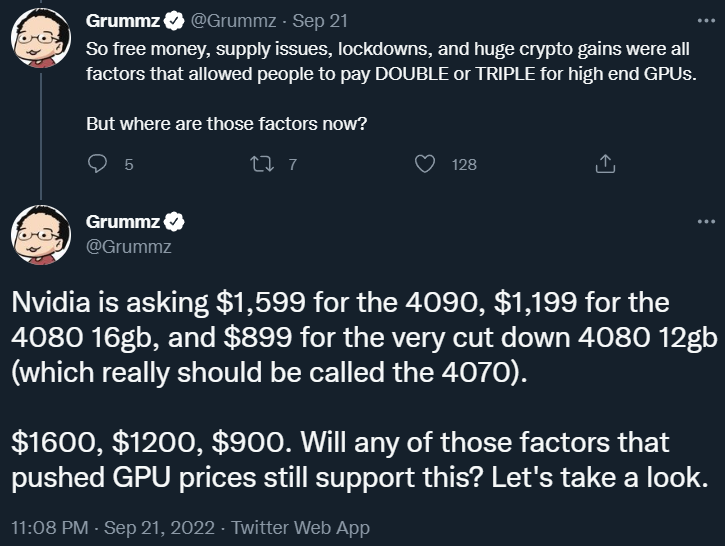 “Supply no longer seems to be an issue. Shipping container prices have plunged as ports have freed up o been re-routed. Chip fabs have produced so many GPU chips that Nvidia is sitting on a GLUT of 3000 series chips, and is on the hook for billions in lovelace orders.”

Kern highlighted how US and Chinese container shopping rates had fallen 50% amid surging backlogs. 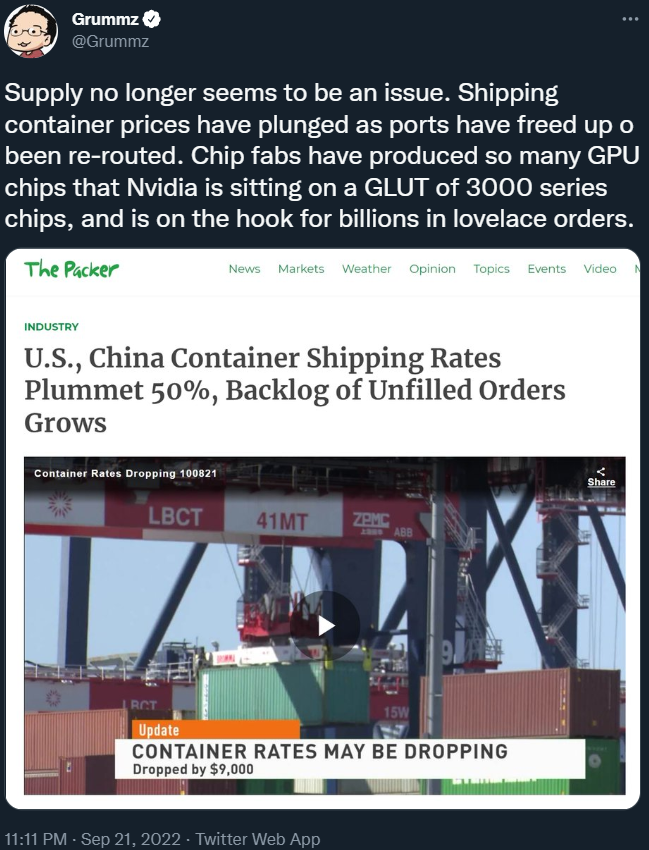 “As for crypto, the price of Etherium has crashed to the point where it is no longer viable to mine for it with GPUs,” Kern educated. “So the miners are gone and won’t be buying 4000 series cards. In fact they aren’t buying 3000 series cards, and AIBs are drowning in cards they can’t sell. EVGA” 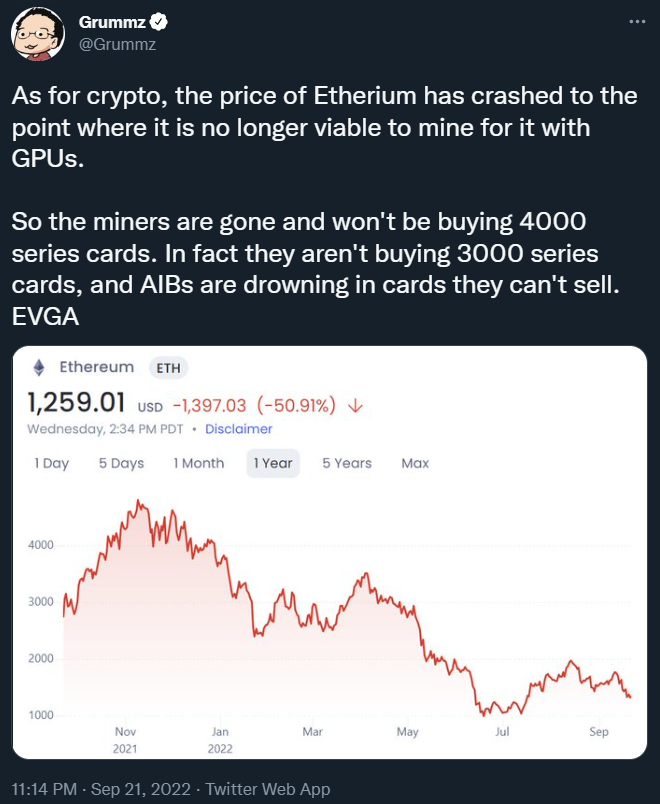 “How about the gamers? Well, two things,” he inquired. “First, gamers are pretty mad at Nvidia. They could not get cards at MSRP, or at all, as the market catered to the miners first. They also aren’t locked up anymore, and many are going out instead of gaming. GPUs are not eh priority.”

“Gamers are looking for bargains, hoping used 3000 series cards flood the market, and the 3000 glut continues to cut prices below MSRP. Oh ya and …no more free money. No stimulus checks,” Kern hammered in. 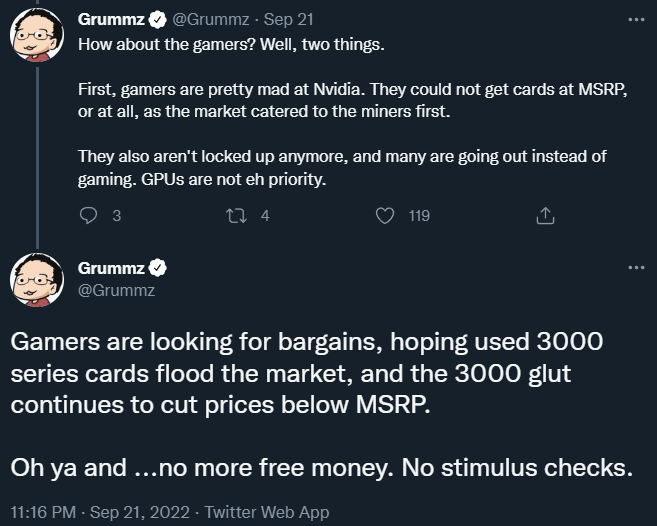 “But worse than no stimmy checks, we have…the worst inflation in 40 years! It’s not just the CPI, but rents are way way up, and food is just nuts. Gamers are dealing with 20% increases in living expenses and people feel it will get worse before it gets better,” Kern dourly declared. 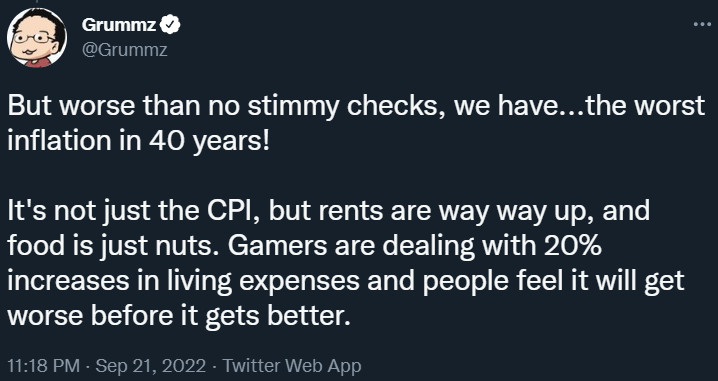 “Absolutely none of the factors that drove GPU prices 2x, 3x are here today. In fact, things are much worse! Jensen, CEO of Nvidia, has badly miscalculated the prices points for the new 4000 series cards. This smile he has won’t last,” Kern predicted. “He has big problems ahead.” 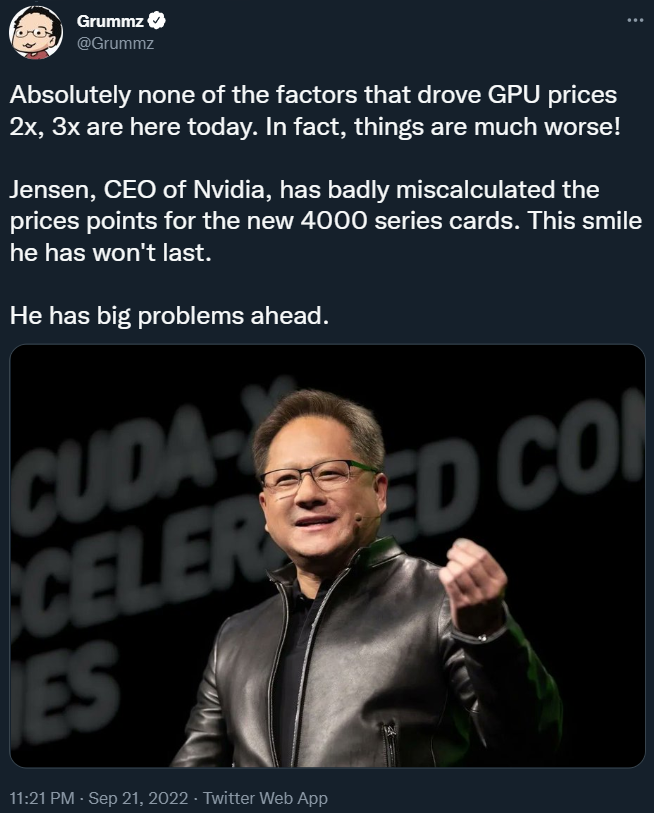 “The boom in buyers willing to pay for 4000 series cards, isn’t there any more. Not when it’s a matter of choosing a GPU vs food and rent. 3000 used cards and discounted stock will be snatched up, but that will be at Nvidia’s partners loss, and Nvidia itself.”

“This is a HUGE opportunity for AMD,” he theorized. “AMD’s announcement is just around the corner. If they recognize we need sane GPU pricing (sadly still adjusted up for inflation), they have a huge chance to grab a lot of market share from Nvidia. I hope they do. Nvidia just fumbled the ball.” 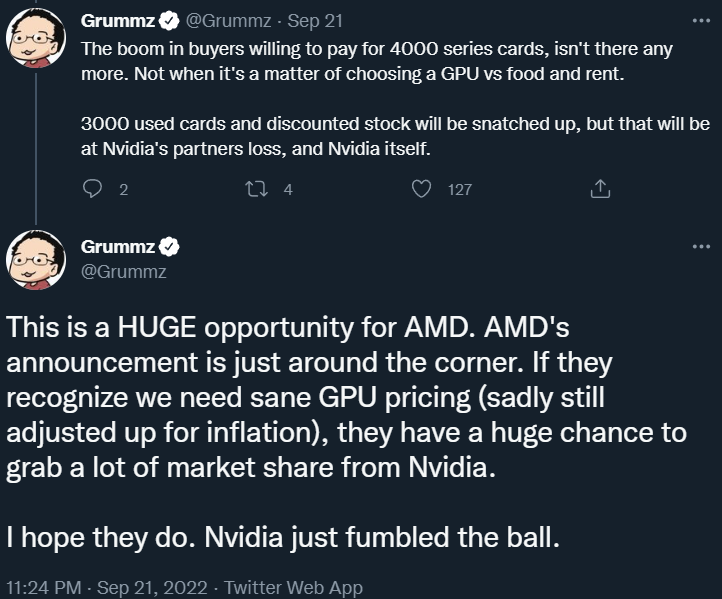 “Oh and those crypto bros who are GPU mining etherium? What if the prices goes up again? That’s over,” Kern stamped out, “You can’t mine even if the price goes back up, as Etherium has switched over to proof of stake instead of proof of work. Not even the price of Eth will save Nvidia.” 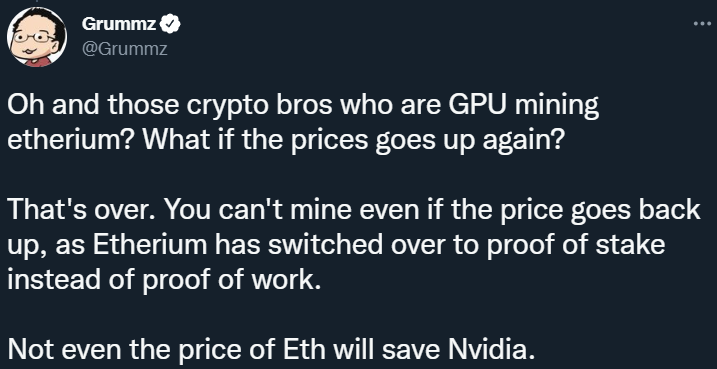