A disappointed minority of Lycoris Recoils fans recently took their own head canons to a whole new level of chaos when they angrily descended upon a member of the its production team after the series’ season finale failed to confirm their yuri shipping fantasies. 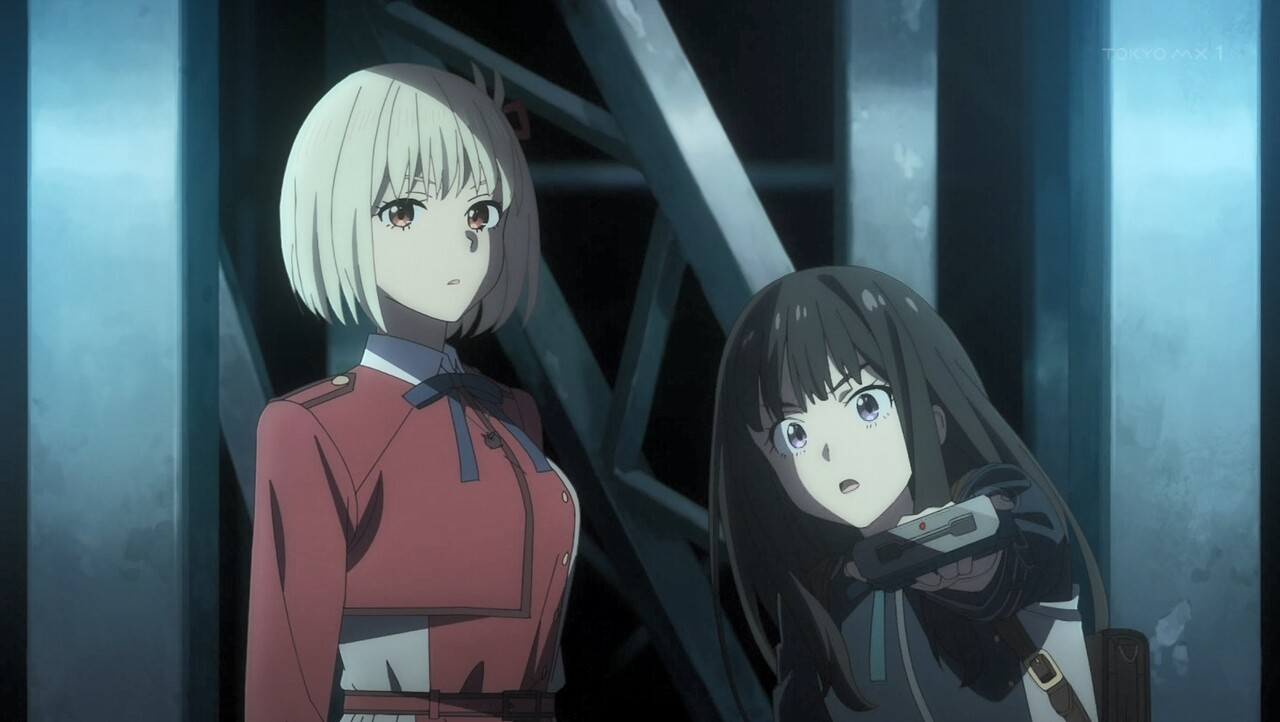 The outrage began on September 24th following the premiere of the episode in question.

Sitting through Episode 13, Recoil of Lycoris, only to find that instead of confirming what they believed to be a deeply-hinted at relationship between protagonists Chisato and Takina – a ship commonly referred to as ‘Chisataki’ or ‘Takina’ – it instead focused on the bitter feud between the former and primary series antagonist Majima, angry shippers descended upon season finale writer Yusuke Kanbayashi near immediately after its conclusion to angrily express their disappointment at what they considered to be a ‘bait-and-switch’. 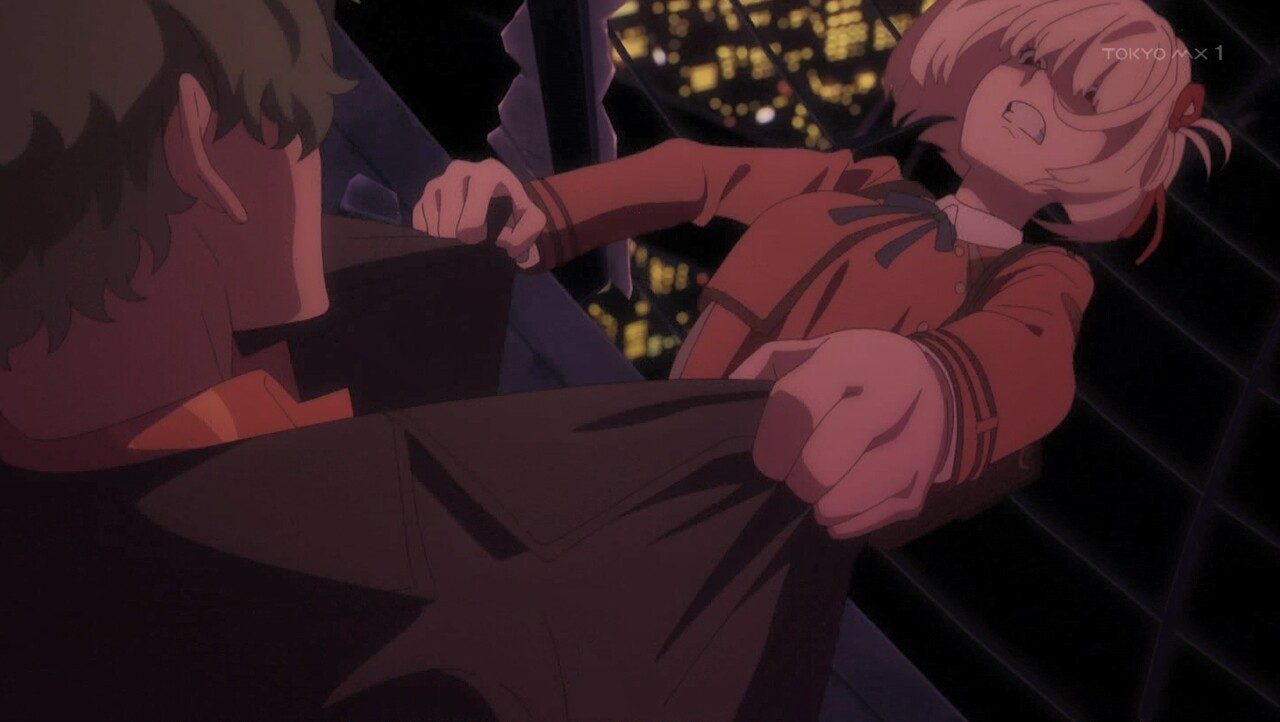 However, surprisingly, this mob was not made up of sexuality obsessed fans in the West, but rather those in the East, particularly China.

The latter, according to Twitter user @Noquestionns, engaged in attacking Kanbayasahi by “using alt accounts and Google translate” to scold Kanbayasahi in Japanese for not confirming their ship. 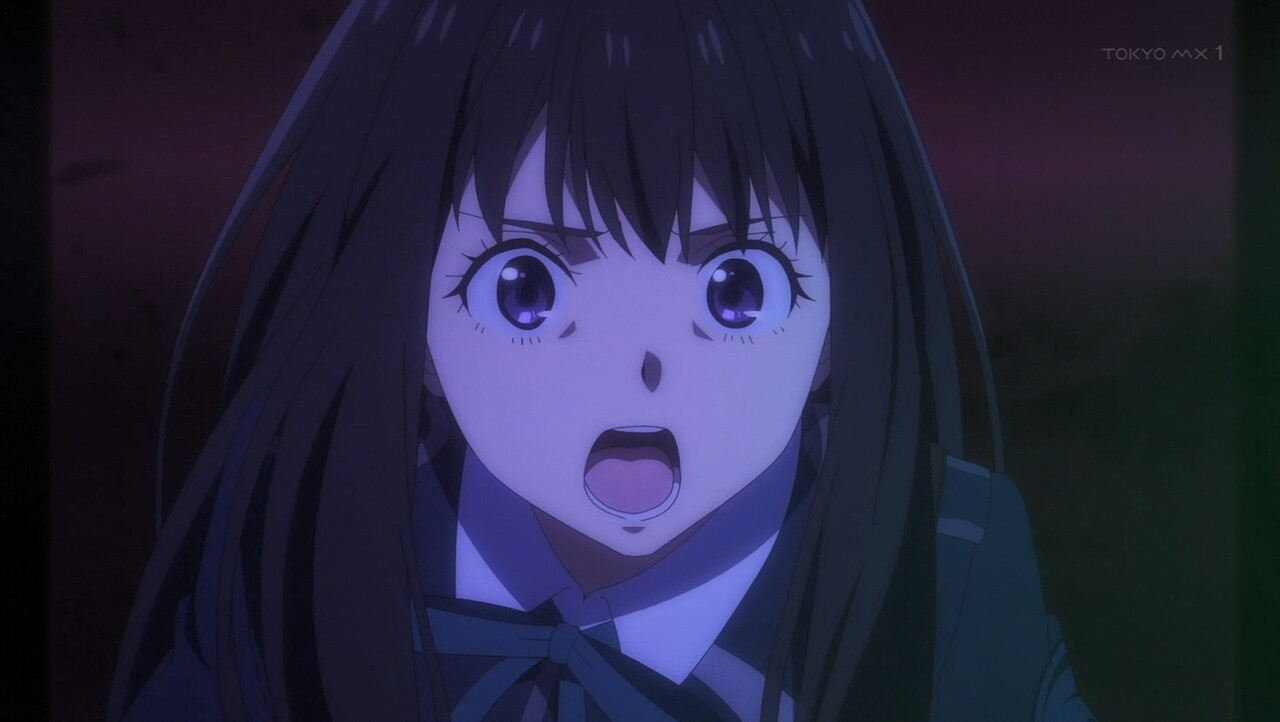 “From the very beginning, Lycoris Recoil was made to look like a yuri series, but in the end, nothing had progressed,” said upset shipper @cyayu31 (via DeepL). “The fact that Majima didn’t die at the end is the most cringeworthy part. It’s the most sickening thing for someone like Majima to be in this work.”

“Majima is not a girl, but as long as he is a man, I don’t think he’s a good idea to be the focus of the writing,” they added. “Do you even know who your audience is?” 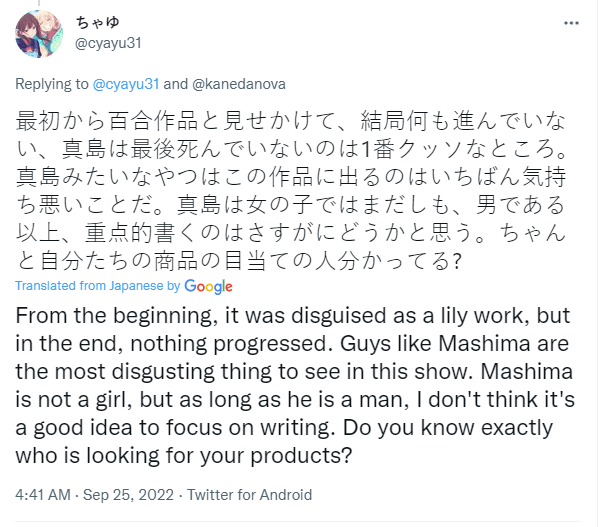 “Most of the people who buy Blu-rays, novels, CDs, and other merchandise don’t want to see Majima,” the shipper continued. “I want to see Chisataki. Chisataki drawn by Imigimuru-sensei was the best, that’s why I bought the Blu-ray. Probably everyone who bought the Blu-ray feels the same way. A person who is a fan of Chisataki bought it for me, and I feel bad for the person who bought it.” 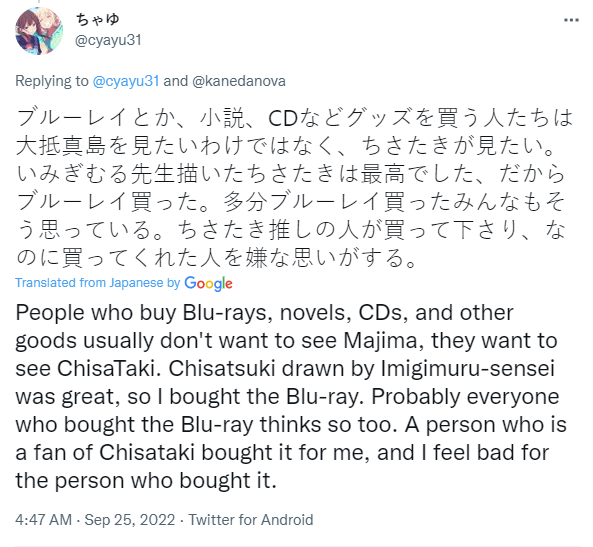 “Why don’t you at least thank the people who bought your stuff?” @cyayu31 ultimately demanded. “Are you making fun of me by writing something so gross as an indirect kiss in the last episode? Why didn’t you write about Chisataki’s indirect kiss? I think the rating will be much higher than it is now, and in my opinion, if there is a second season, please don’t ever take Mashima’s side. I don’t want any of that nonsense.” 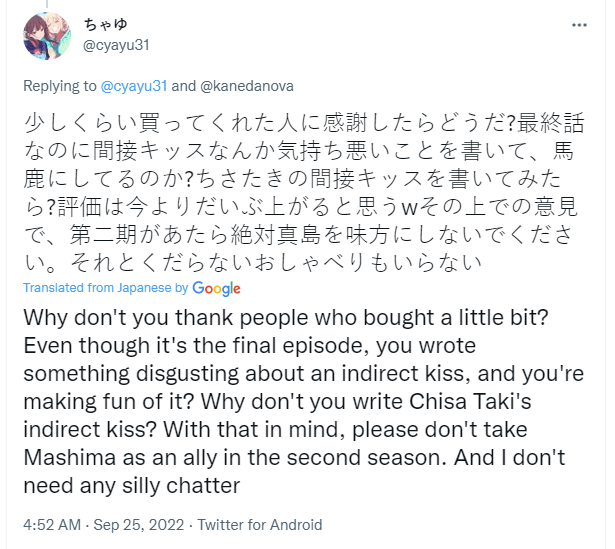 A minority of these shippers were so angry that their ‘promised’ Chisato and Takina yuri ship was never realized that they escalated to making literal rape and death threats against not just Kanbayasahi, but also his his mother.

“Your ancestors were pushed by the U.S. military in Japan to gang rape you on the ground and gave birth to your mother with syphilis,” declared @Nozomisbluebird. “And your mother was raped by more than a dozen disabled people and married a man with AIDS and end-stage uremia, so she gave birth to this systemic sick bastard species of yours.” 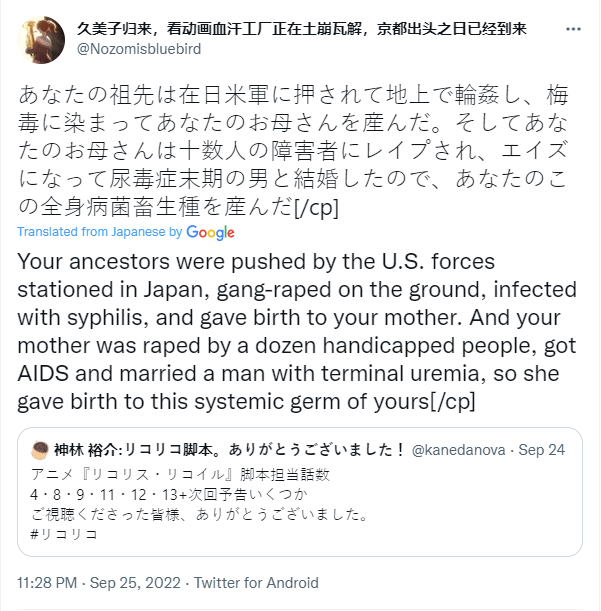 @MiyanagaYouko bluntly threatened, “Yusuke Kanbayashi, die! Takina is not your clown! Damn you! Die with Majima!” 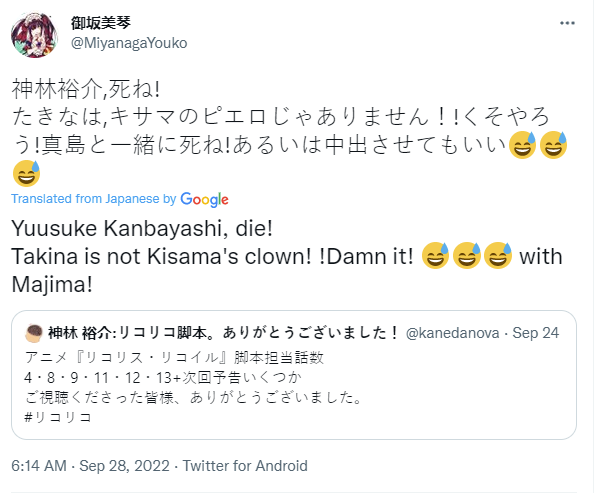 The situation only escalated when Kanbayasahi broke his silence to address a question asked by @maple_sari about a scene which particularly triggered shippers wherein Chisato and Majima shared a drink from the same. 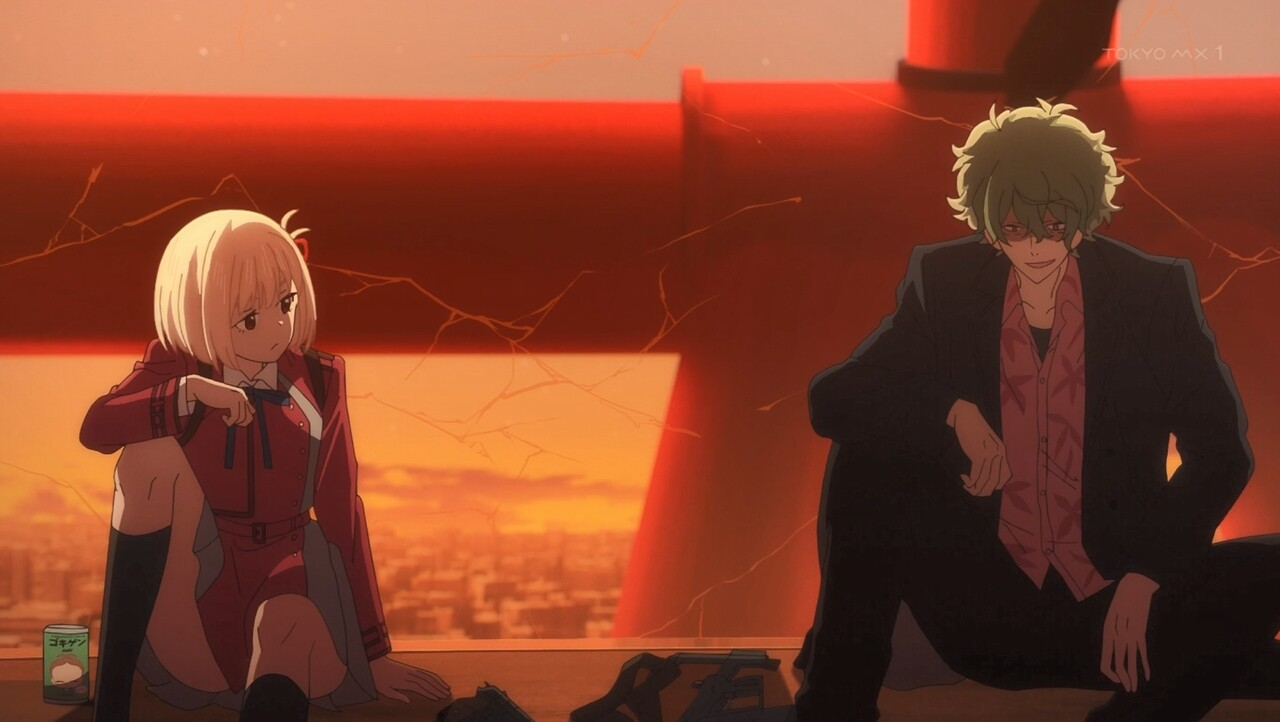 “I see from Twitter that many people think that that water drinking scene is gruesome,” wrote @maple_sari. “What on earth did you intend to make this scene? Do you intend to contrast episode 8 and bring out the differences in thinking between the different tastes of the adversaries?” 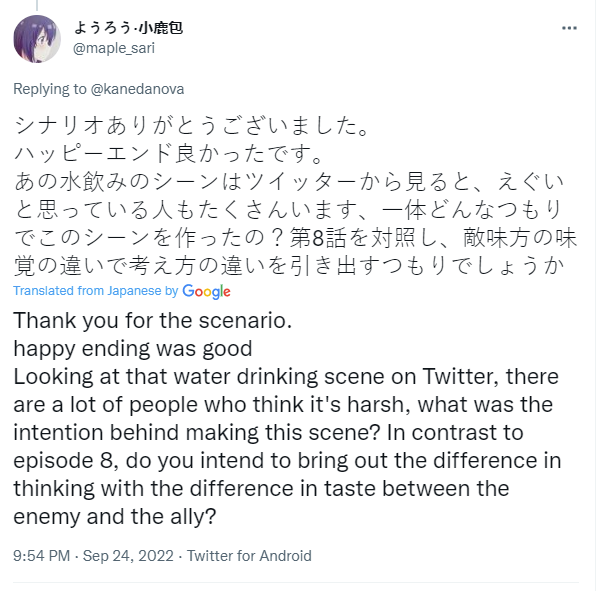 “There are many layers to the description,” Kanbayashi replied. “The intent of Senzoku and Majima’s actions, the meanings they ascribe to the work, metaphors, or meanings that arise independently of the creator’s intentions.”

“Senzoku and Majima are not acting with the audience in mind,” he explained. “I think it is up to the viewer to find meaning in that. As for us, we are open to interpretation.” 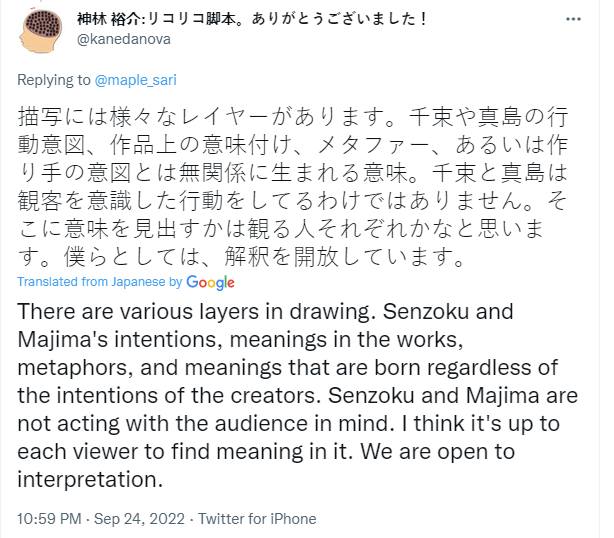 Unsurprisingly, this explanation was not good enough for the mob who instead only found themselves more emboldened in their assault on Kanbayasahi.

“You cheated a lot of yuri fans,” @codesunmoon tweeted.

@hddhh_seli complained, “Don’t shirk your responsibility to the characters!”

“You say that the characters’ action has nothing to do with the creator’s intention [but] didn’t you write the f–king script?” they screeched. “If the characters can take action spontaneously, you’ll probably lose your job.” 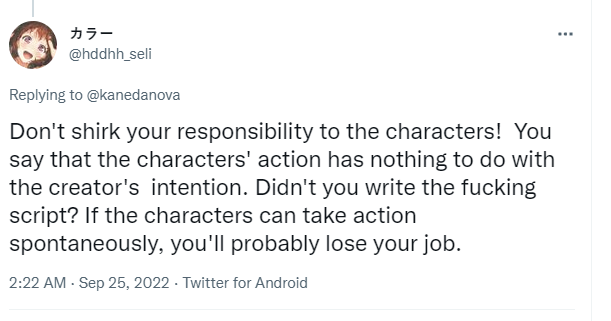 @6pJKdVi5umWErDt disgustingly proclaimed, “You are actually my son. Your mother was a comfort woman during the Anti-Japanese War, and I directly f–ked her uterus.”