Monty Python and Fawlty Towers star John Cleese has drawn the ire of the Left-wing outrage mob after announcing that he will be the host of an as-of-yet unnamed ‘free speech show’ on the anti-woke GB News channel set to air later this year. 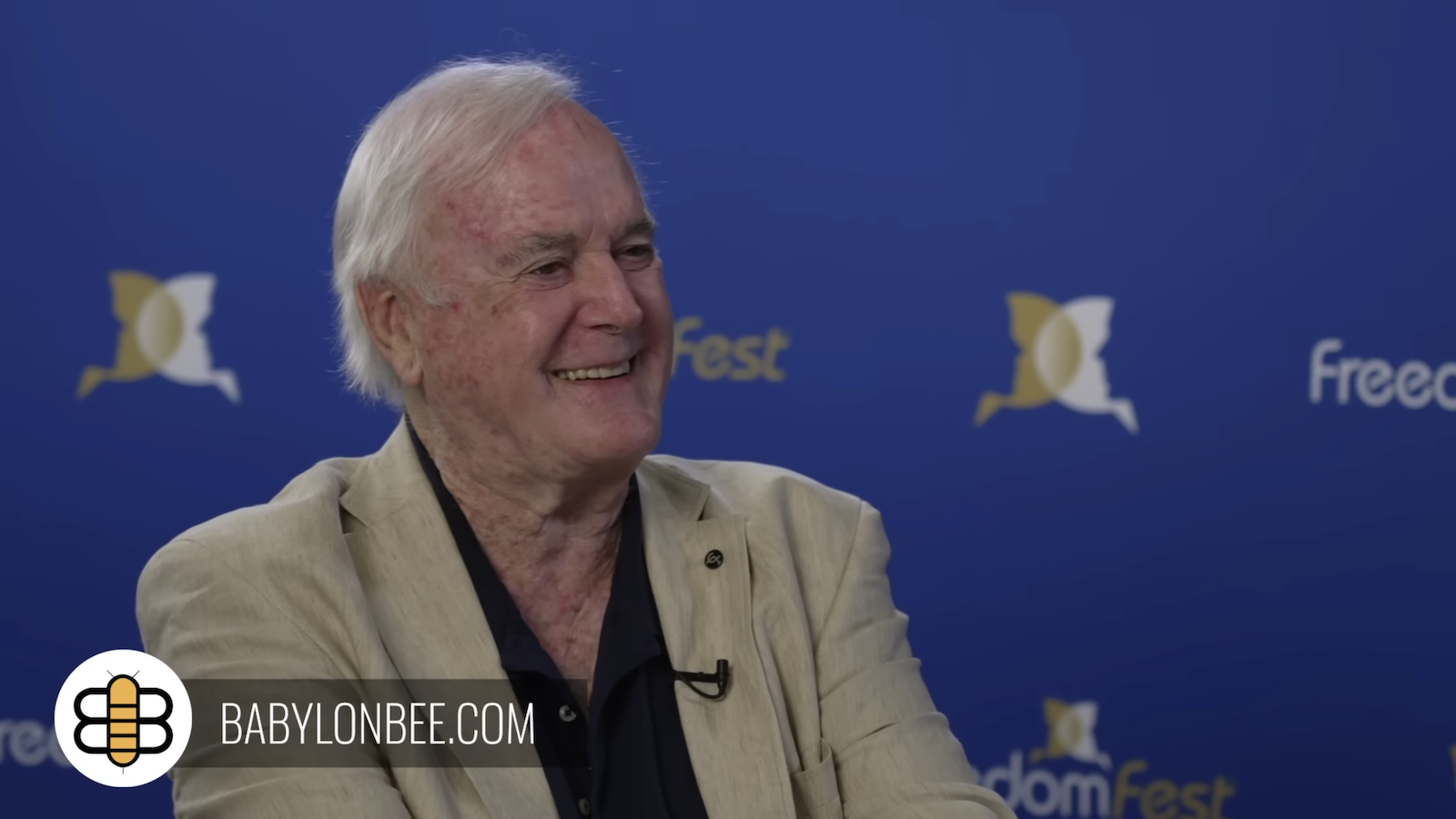 The announcement was actually made by Cleese himself during an appearance on BBC Radio 4’s Today show, wherein the renowned comedian asserted, “The nice thing about talking to the GB News audience is that they may not be used to hearing the sort of things I’ll be saying.” 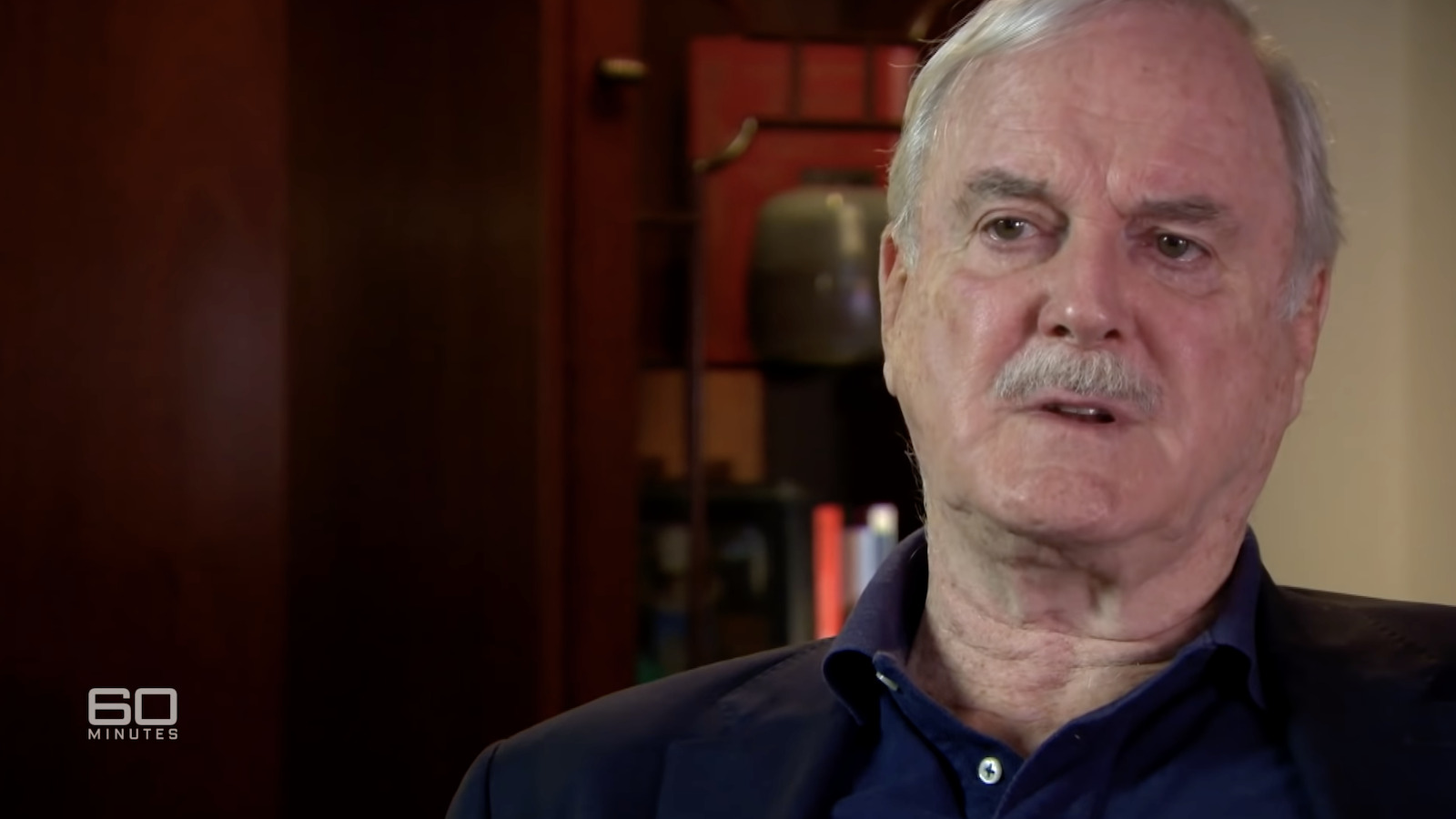 “The only thing is… the BBC won’t come to me and say, ‘Would you like to have some one-hour shows?'” He elaborated. “And if they did I would say, ‘Not on your nelly!’ because I wouldn’t get 5 minutes into the first show before I’d been cancelled or censored.”

As soon as the Monty Python actor made those comments, Today host Amol Rajan – seemingly moving to abruptly end their interview – reminded the comedian that their network gave him an uncensored platform five full minutes – something that Cleese would later claim was not true.

In a statement issued on Monday the 10th of October, GB News announced that they had “confirmed today that actor, comedian, writer, and producer John Cleese will host a new series on the channel next year.”

“The programme will feature John in conversation with his choice of guests on a wide range of areas that interest him. Mr Cleese revealed the news this morning in an interview with journalist Amol Rajan on BBC Radio 4’s Today Show,” GB News further revealed. 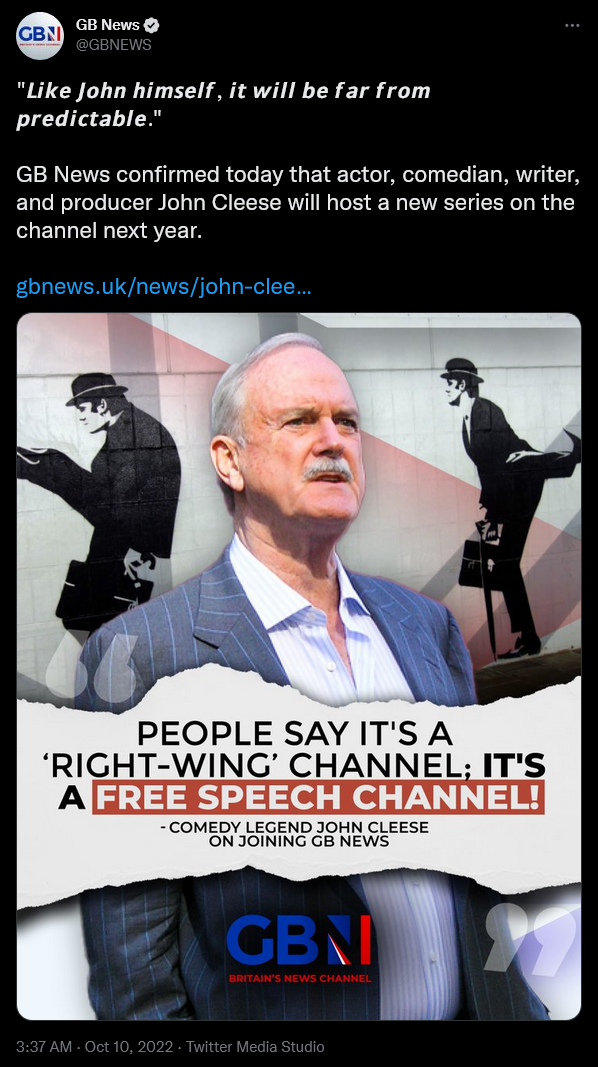 “John will have complete creative freedom to have the conversations he wants to have with the people who interest him most,” said Doyle, before going on to declare that the upcoming show, “like John himself, it will be far from predictable.” 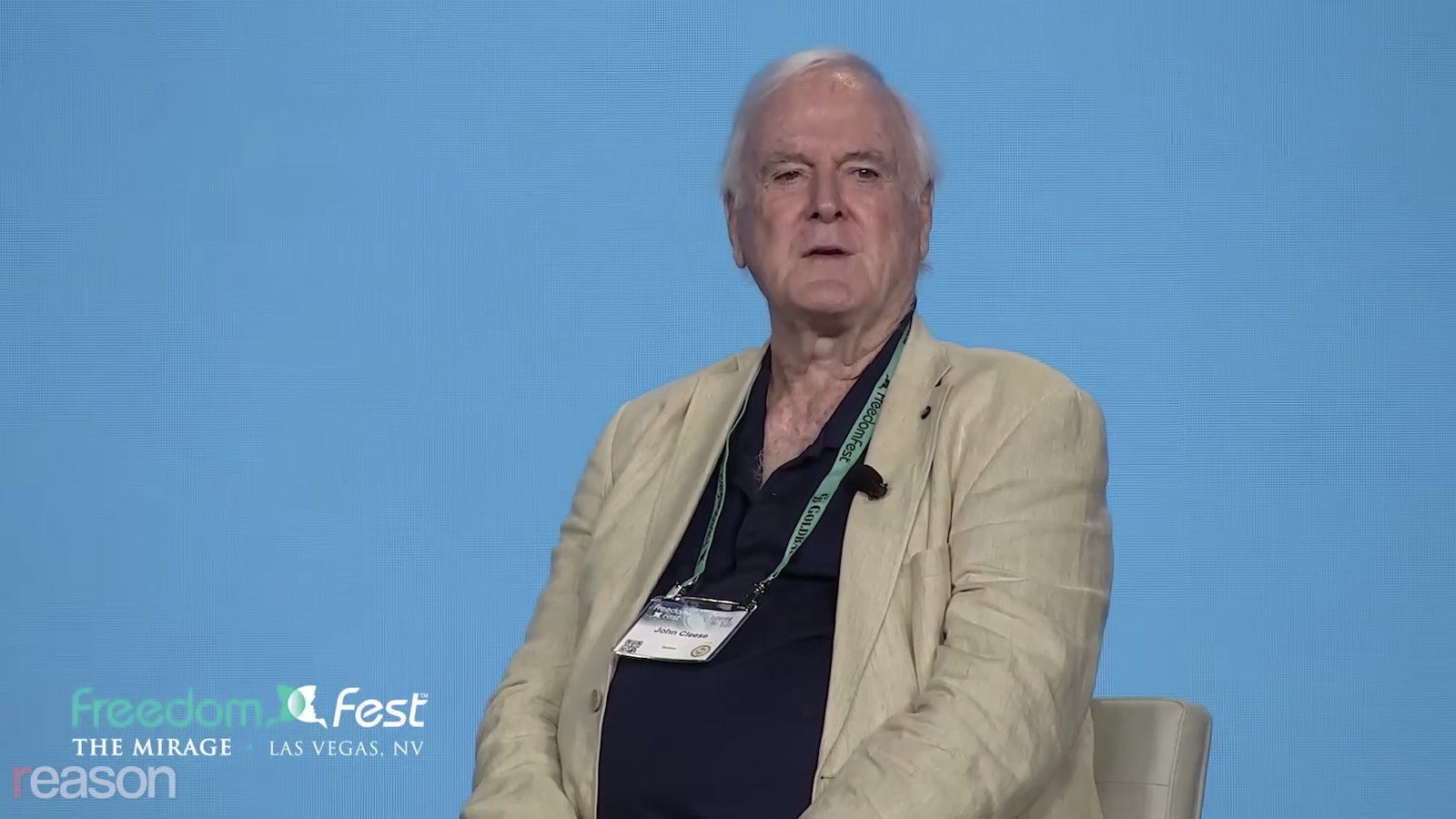 Unsurprisingly, the woke mob were quick to take issue with Cleese’s latest career move, taking to Twitter to express their disappointment in fairly predictable fashion.

“Siri : What’s the best way to destroy a legacy?” mocked one disgruntled user in reply to GB News’ tweet announcing the new show.

“So sorry to hear John Cleese is finding it so difficult to get work these days,” sarcastically wrote another user. “Still at least he’s found a comedy channel even if hardly anyone watches it.”

@HarryKeithL remarked, “Well, they wouldn’t allow him on the BBC…. according to John Cleese on the BBC this morning,” failing to realise that a brief interview with a network personality is not equivalent to executives greenlighting a full series starring the actor.

In one particularly distasteful comment, @FoxReels alluded to the 1989 passing of Cleese’s Monty Python co-star Graham Chapman, @FoxReels heavily implied that the still-living comedian should have been the one to die instead.

“Graham Chapman shouldn’t have been the one to go first,” they said.

In turn, Cleese took to social media to defend his decision to work with GB News. However, before doing so, the comedian made an interesting accusation, alleging that his opinions on censorship led the BBC to near immediately shut down the interview.

“I was amused that the moment I really criticised the BBC yesterday, the interview was brought to a rapid end,” the comedian lamented. “Before we had talked about the things we had planned to talk about ten minutes earlier.” 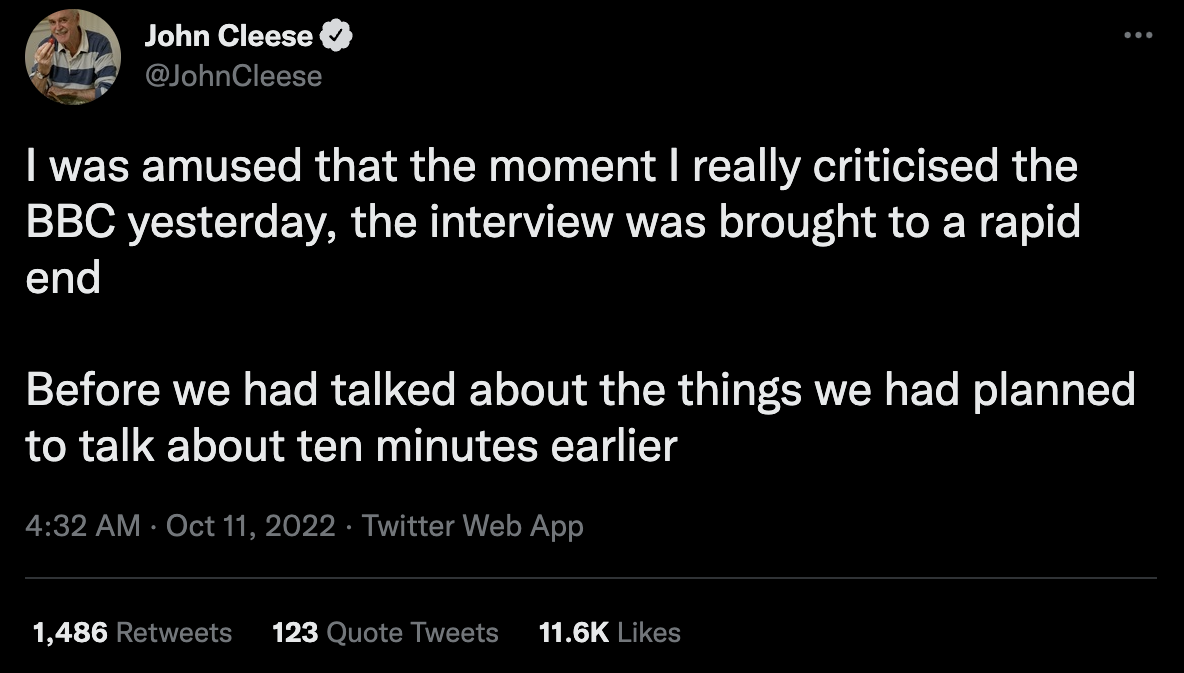 From there, Cleese would proceed to personally reply to a number of his disgruntled critics.

“It would depend on the subject, wouldn’t it?” the actor replied to one since-deleted tweet from @Daviemoo that presumably questioned his decision. “The show I have in mind for GB News would NEVER get on to the BBC. Are you able to understand that? I think…probably not.” 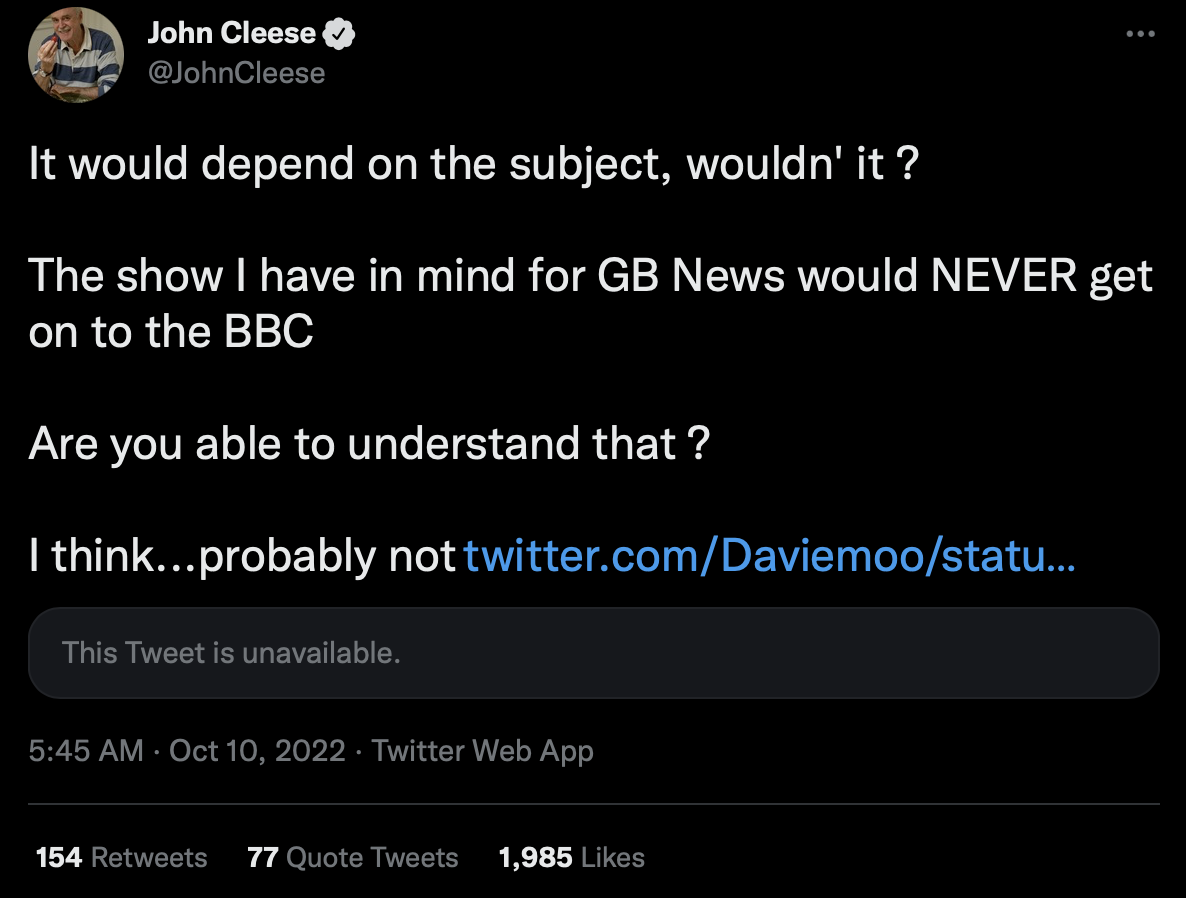 One of the more level-headed questions the comedian was asked came from @timreid69, who pondered, “So do you believe you’ll never be asked back on the BBC after your GB News show goes out? Or is it just content that gets cancelled, in your view, rather than the person?”

“It’s content,” Cleese asserted in reply. “There’s a massive about of important information that gets censored, both in TV and in the press.”

“In my new show, I’ll be talking about a lot of it,” he added. “You should be prepared to be shocked.” 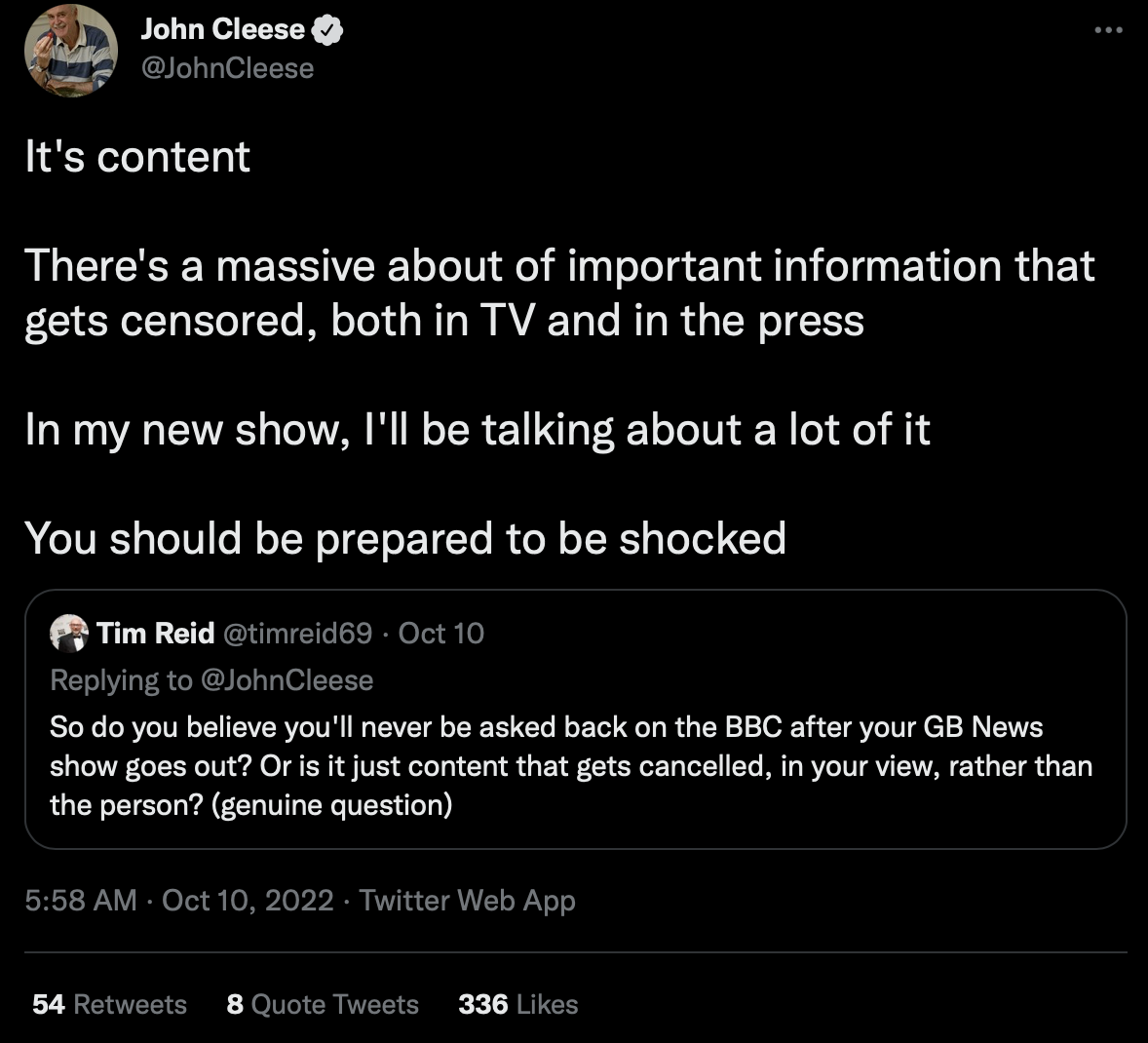 Met with the insult of “Well. You’re going to be un *such* fantastic company on GB News. That’s the level you’ve chosen for yourself,” from @bashthebox, the comedian fired back, “I thought ‘guilt by by association’ went out with Communism.”

“Why don’t you watch the first couple of programmes?” he challenged his detractor. “You’re a bit like [Conservative Activist] Mary Whitehouse trying to get [Monty Python’s] Life of Brian cancelled before they’d even seen the script.” 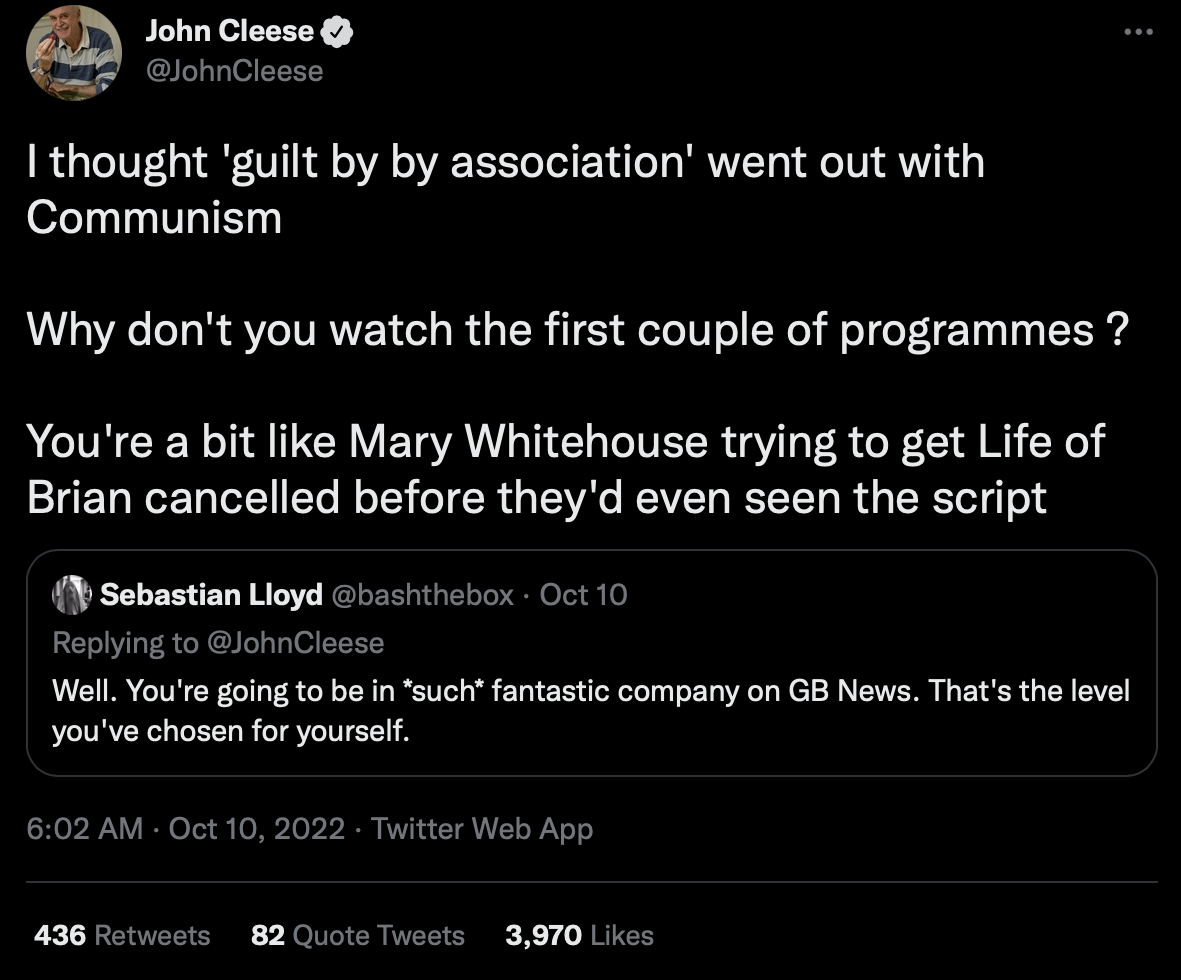 Wished genuine “success” from @harry_thomsett, a humbled Cleese responded, “I appreciate your open mindedness, Harry – but beware the ‘wokes’. They won’t like it!”

“Like all people who believe thet are purer than they actually are, they are authoritarians,” they elaborated. “Which is why all the best comedians make fun of them.” 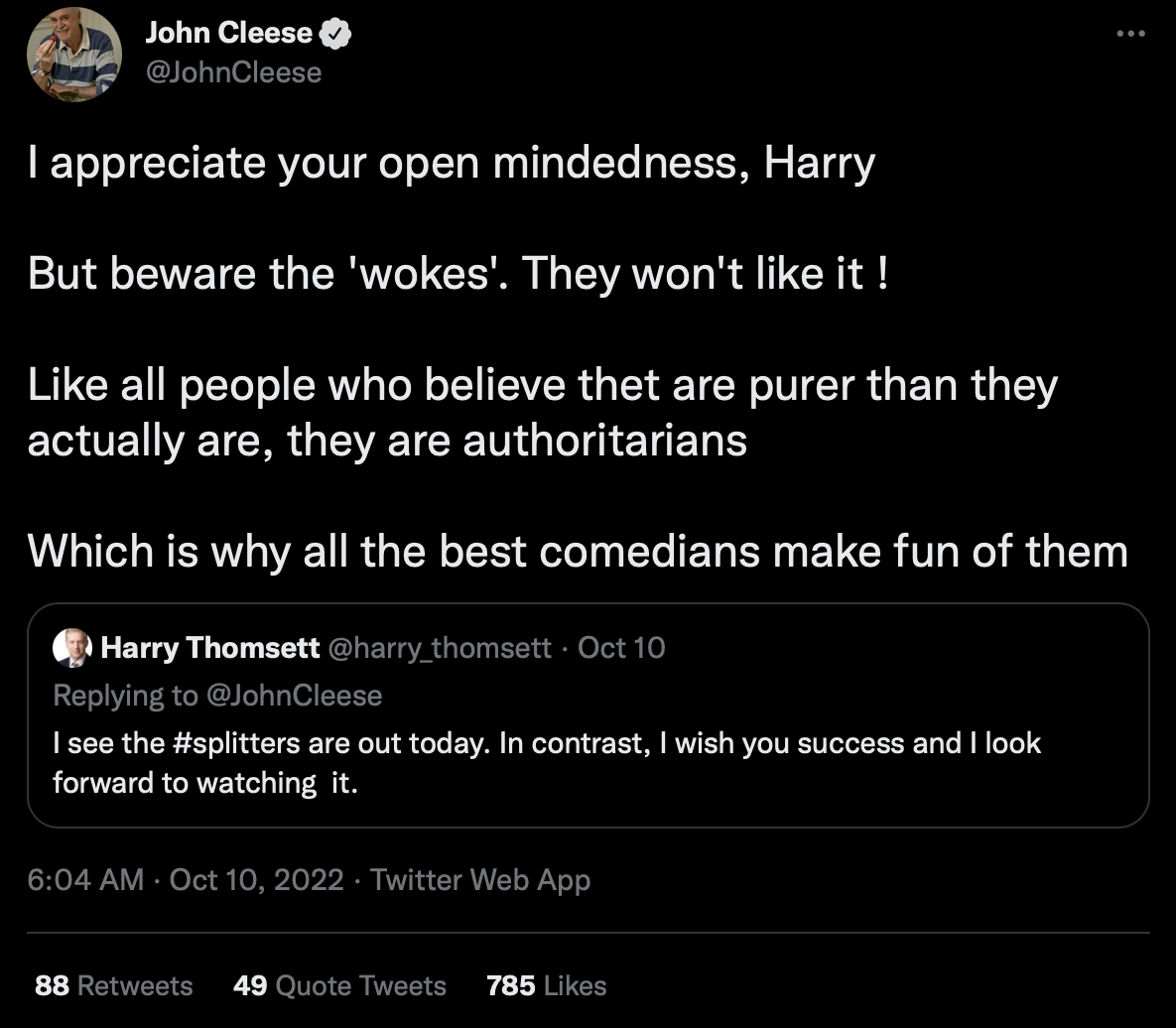 Cleese would also address an interesting exchange between Twitter users @topfotogmw and @jezwyke.

“Fawlty Towers would never be made by the BBC these days, that’s how far we’ve fallen,” said @topfotogmw, to which @jezwyke rhetorically inquired, “Martin, you do know that times change, right?”

“It’s not 1970 any more,” said @topfotogmw. “Fawlty Towers would be made, but it would be different. The overt racism and casual violence would be fone, but the basic premise and foundation would be the same.” 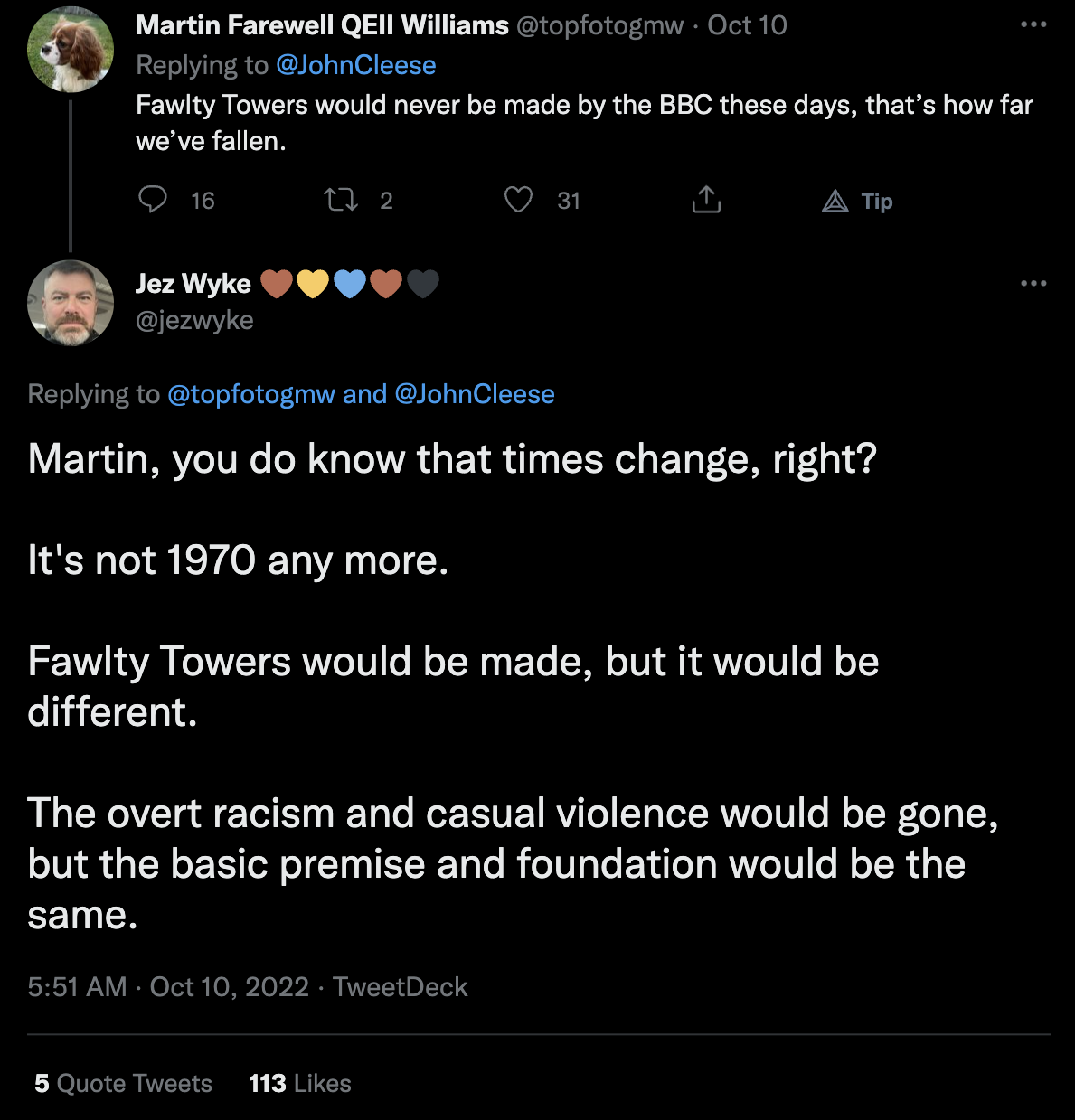 Specifically addressing @ezwyke’s response, Cleese encouraged, “I suggest you try to grasp the idea of irony. It’s a way of making fun of ideas by putting stupid ones in the mouths of idiots.”

“Remember, the meaning of words comes from their context,” he continued. “This is very difficult for the literal-minded.” 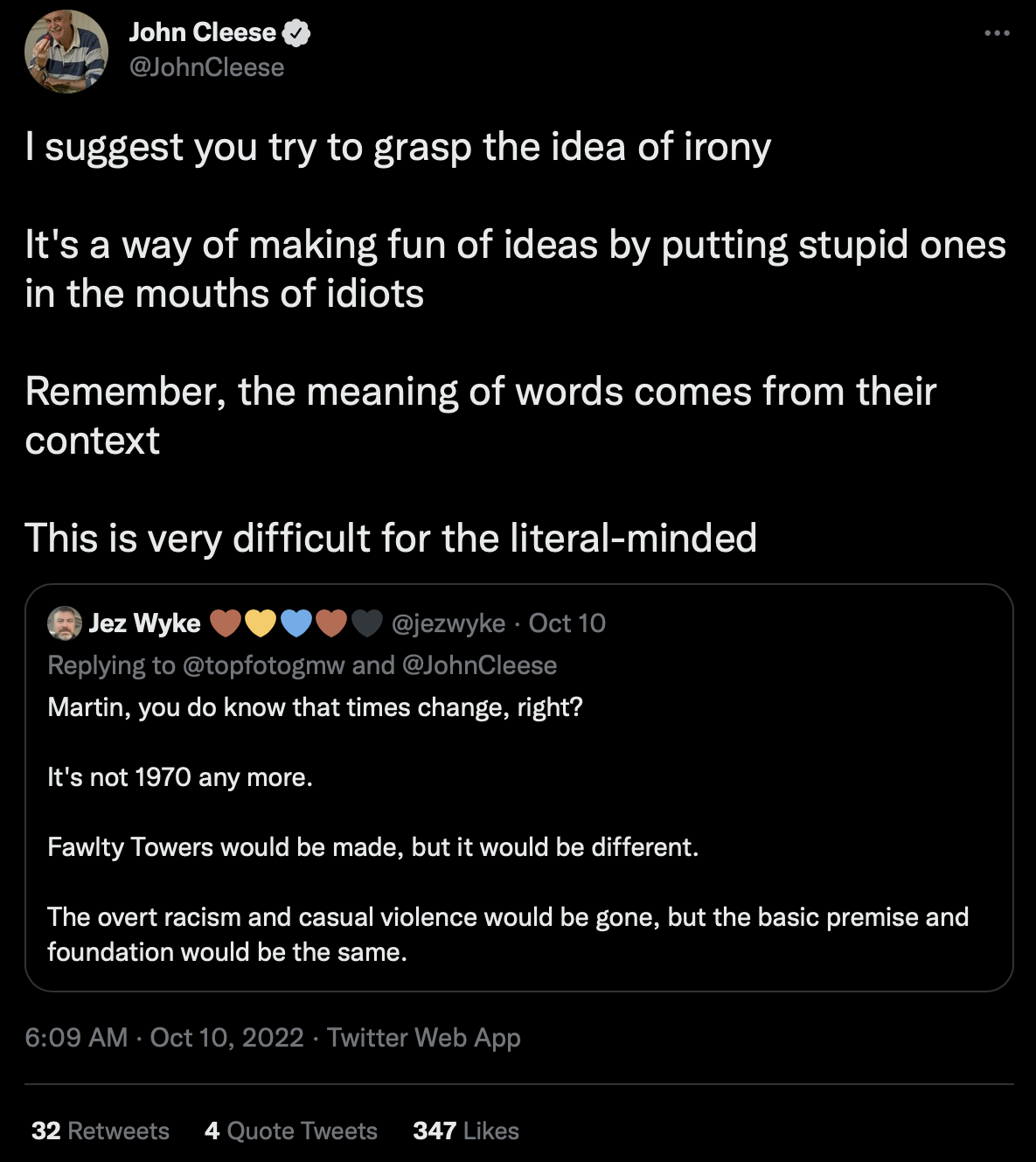 Giving a tease of his show’s content, Cleese firmly declared in response to @Saffiya_Khan1’s sarcastic questioning of  “O that sounds good, does that mean you’re going to put forward socialist views which the BBC have wanted to suppress and smear over, at least, the last 7yrs?”, “Yes”.

“We’ll be talking about stuff like that,” he said. “Including some of the new [Social Democratic Party] ideas, which are economically more centre left, and culturally more centre right. Ideas you won’t have heard much about on British television!” 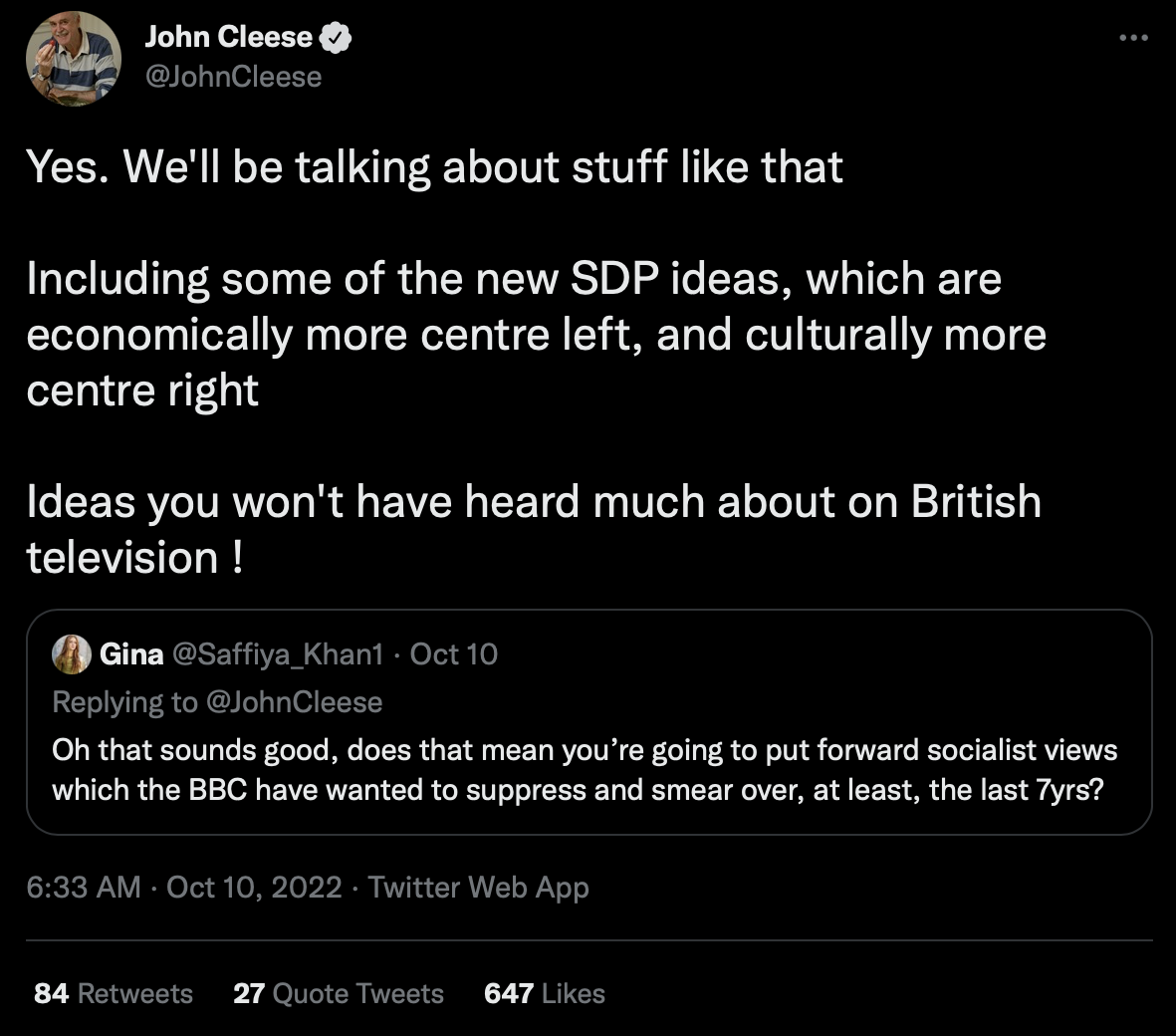 To this, Cleese claimed, “[the BBC] shut the interview down when I explained why I would not have been offered, or would not have accepted, the same offer for a who at the BBC.”

“”Thus confirming what I had just been saying,” he asserted. “Perhaps you didn’t notice.” 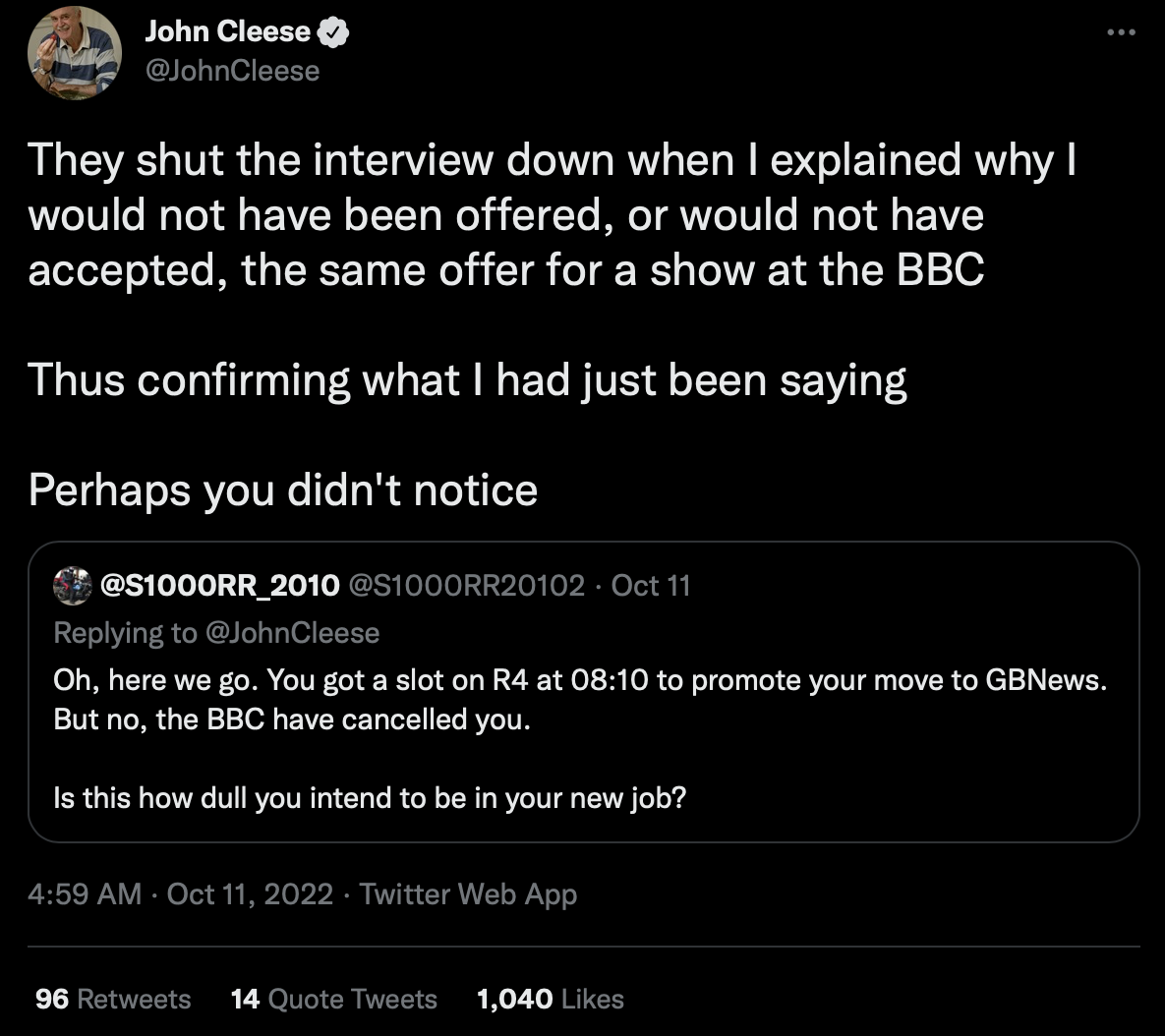 While a fair amount of users took issue with the comedian’s announcement, the news that Cleese would be joining GB News was also met with its own share of support.

“This is so exciting!” exclaimed GB News host Darren Grimes. “What a legend. He’s so right, isn’t he? These days it’s ‘right wing’ to be pro speech and debate!”

“Bizarre times, we need voices like [John Cleese]’s mor than ever!” the elated political commentator concluded. 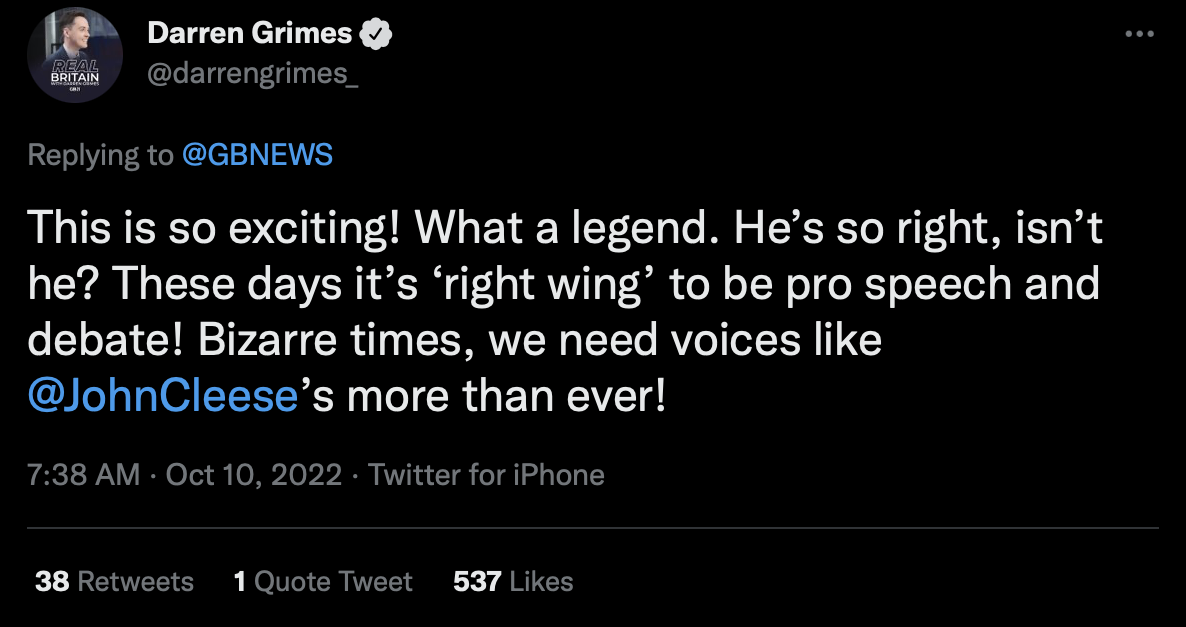 “John Cleese, a man who is as liberal as they come, is joining GB News,” pointed out UK political pundit James Mellville.”He said, ‘GB News is not a right-wing channel. It’s a free speech channel.'”

He then accurately predicted, “Now just watch all the usual suspects try and purge him for this and accuse him of being a ‘right-wing shill.’ Typically pathetic.” 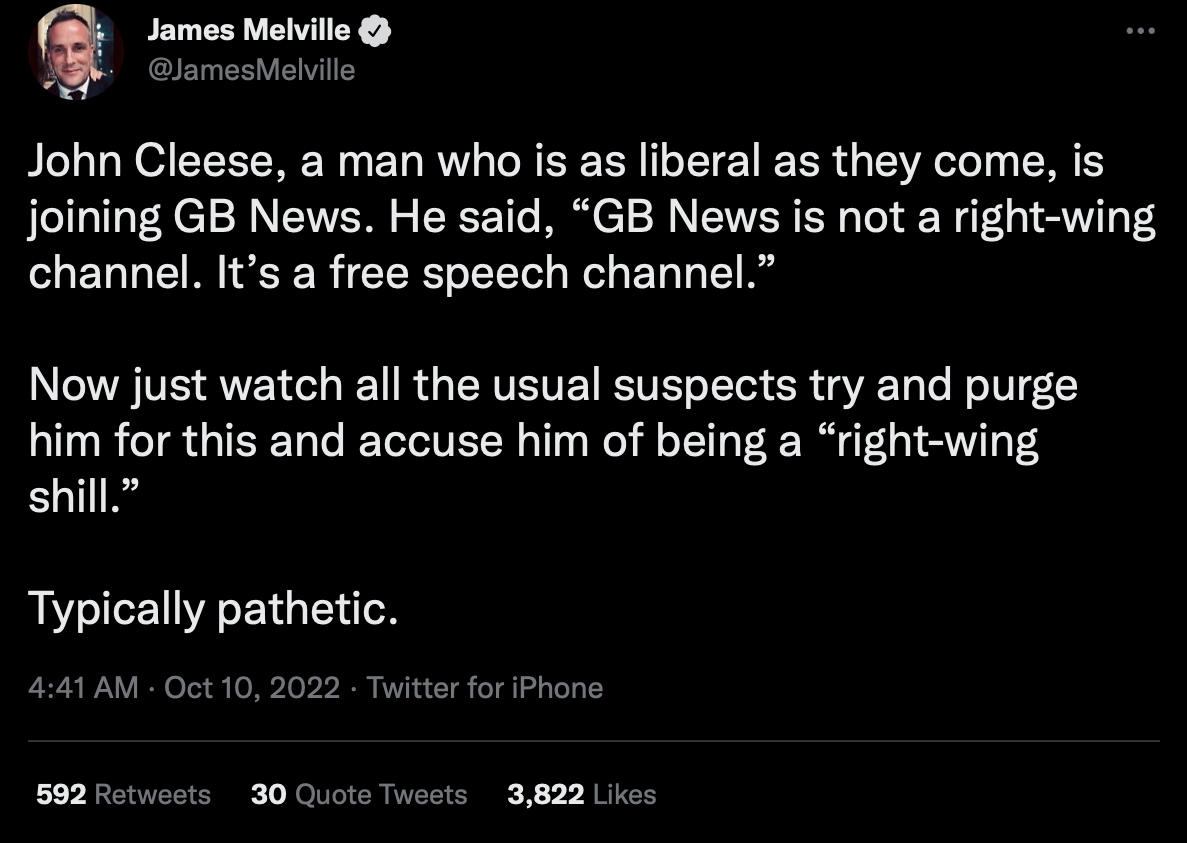 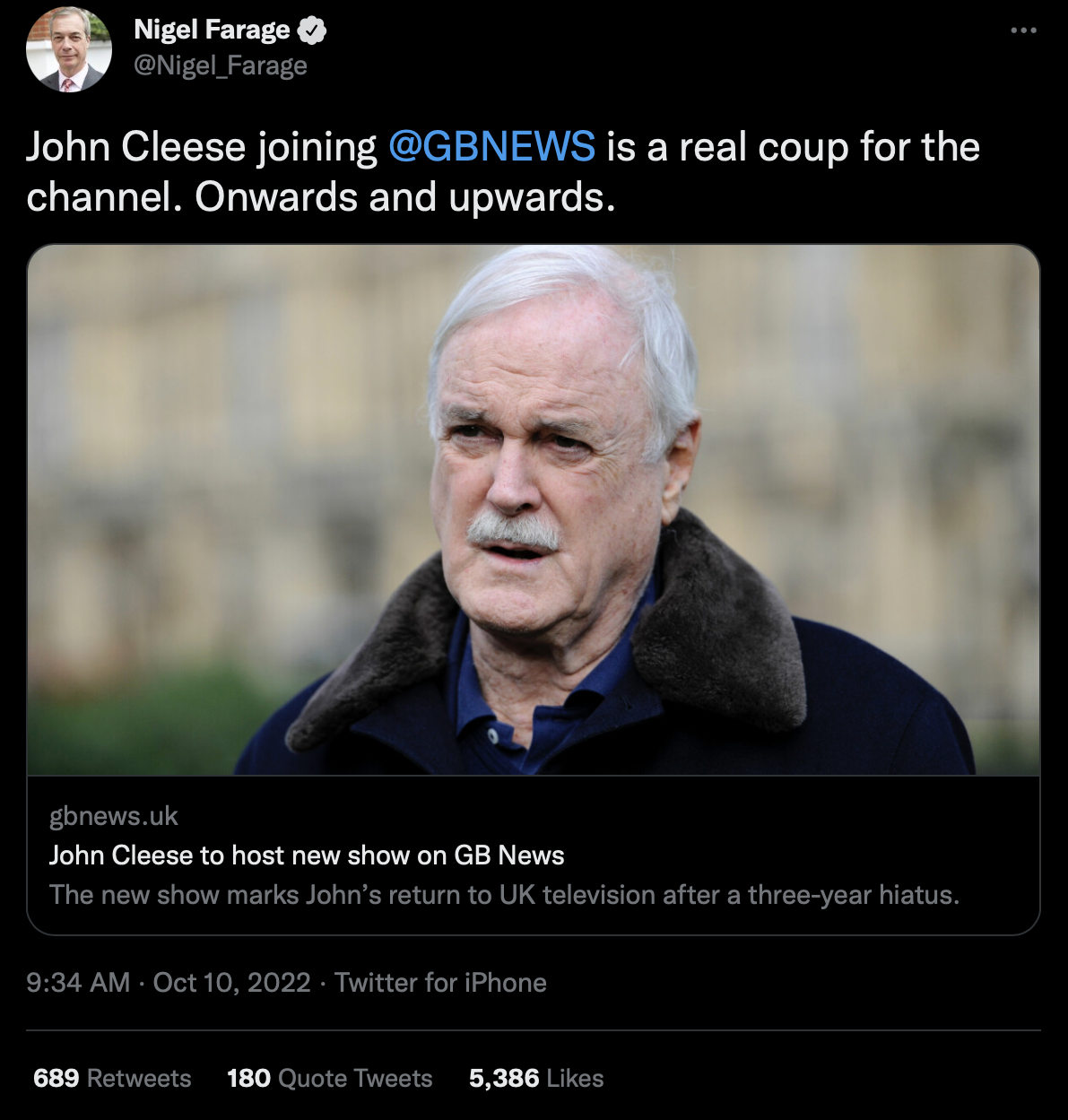 NEXT: John Cleese Has Microphone Taken Away At SXSW For Demanding “Reparations From Italy And France” For Historically Enslaving The British