In the West, Pokémon Scarlet and Violet has gained massive popularity for its more ‘diverse’ character options, but Japanese fans believe the changes said options are proof that the beloved RPG series has succumbed to wokeness. 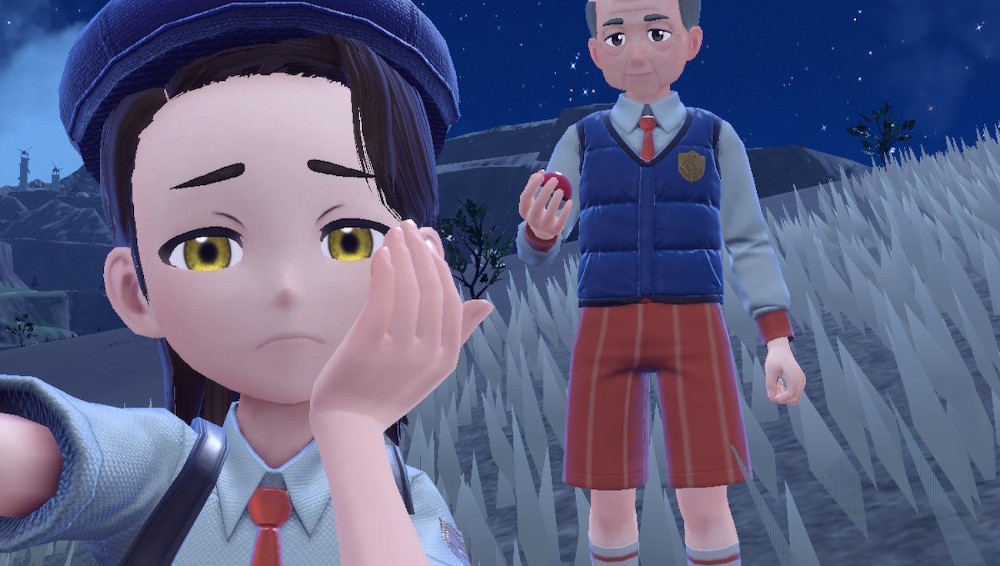 The trainer meets an elder opponent in Pokémon: Scarlet and Violet (2022), The Pokémon Company.

Ever since its November 18th release for the Nintendo Switch, Pokémon: Scarlet and Violet has had a rocky start. 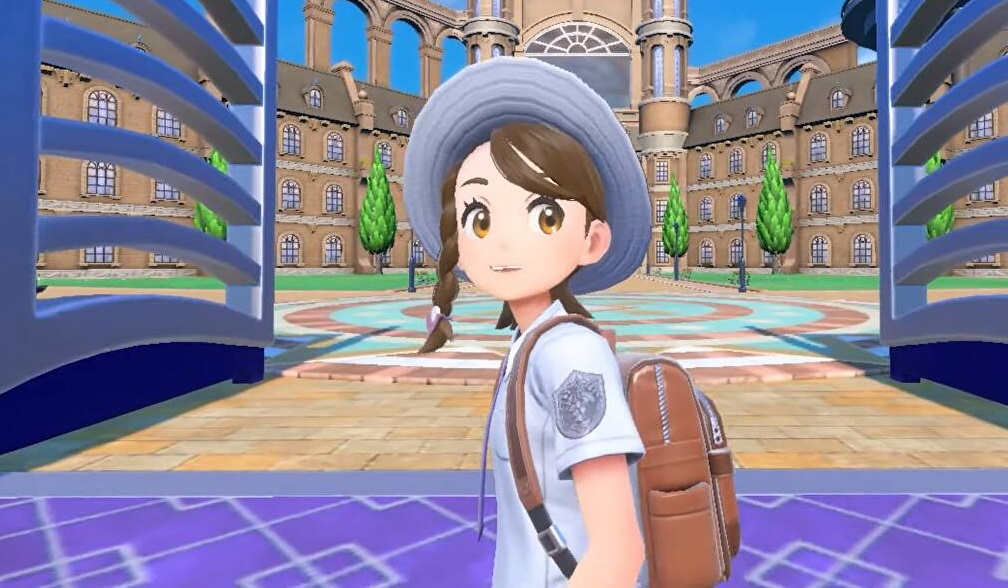 The trainer takes in her surroundings in Pokémon Scarlet and Violet (2022), Nintendo, The Pokémon Company

From various performance issues, to glitches, to the existence of an emergency save feature meant to be used to avoid progress loss due to a random crash, the latest installment of the long-running franchise has drawn the ire of players the world around. 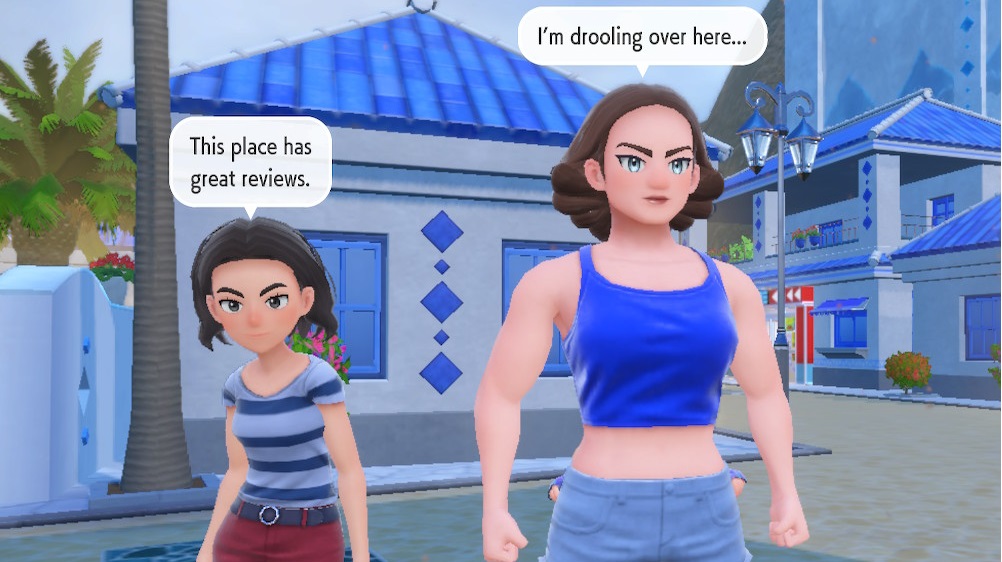 A couple of Paldean locals prepare to chow down in Pokémon: Scarlet and Violet (2022), The Pokémon Company.

Of course, the games have not been without its fans, and in the West, a particular point of praise has been Scarlet and Violet’s new ‘diverse’ character designs.

In a significant divergence from past entries, rather than NPC characters being shown as, on average, youthful and fit, some of Paldea’s residents break this trend by being depicted as either extremely old or, in the case of some women, buff and muscular. 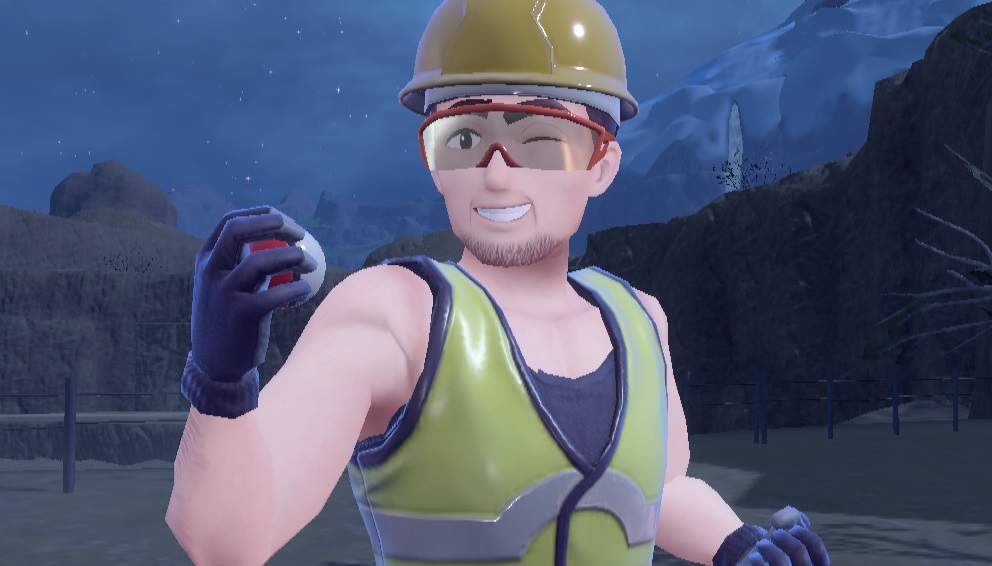 A Worker prepares for battle in Pokémon: Scarlet and Violet (2022), The Pokémon Company

Not only that, but the game has also removed skirt options for the players’ personal avatars, instead relegating both the male and female options to wearing the same style of school uniform.

However, while Western fans have been quick to celebrate these changes up as a victory for representation, their reception has been significantly different in the game’s native country. 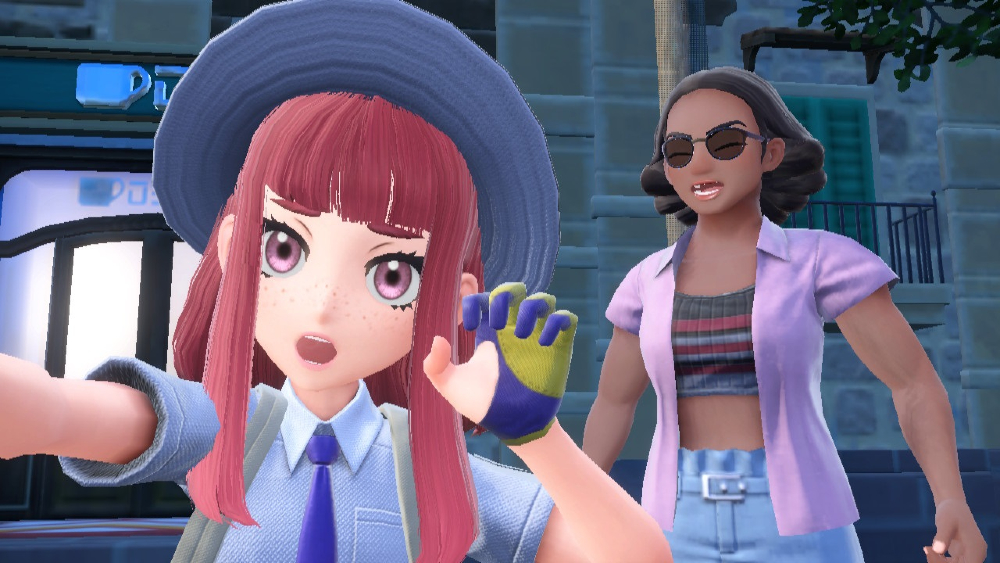 The trainer takes a selfie in Pokémon: Scarlet and Violet (2022), The Pokémon Company

In Japan, players are not exactly happy with what the replacement of the series’ regular NPCs with those they describe as “ugly” and “old”.

Further, since gender options were removed from Sword and Shield, Japanese Pokémon fans have speculated that the removal of skirt options indicates that developer Gamefreak has chosen to sell their souls to political correctness in an effort to expand into overseas markets. 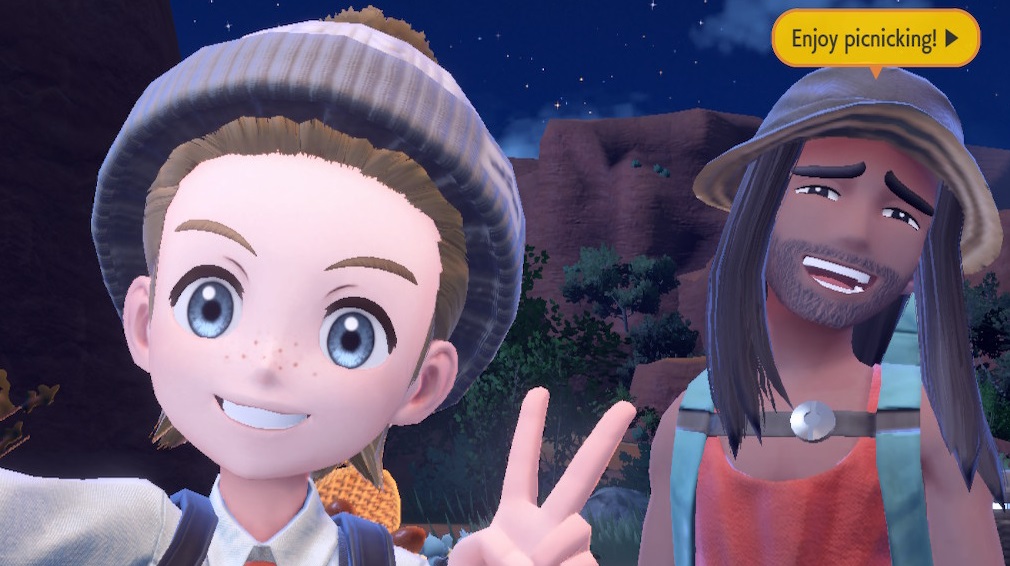 The trainer snaps a selfie with a Hiker in Pokémon: Scarlet and Violet (2022), The Pokémon Company.

On the issue of the NPCs, @Muscle_Angel asserted (via DeepL0, “I don’t know if it’s diversity or what, but you can’t dress an old mob trainer in a uniform and call him a ‘student’ if he’s a quirky, old mob trainer.”

“I know you’re trying to say that age has nothing to do with learning,” the user continued, “But it’s really hard to be so blatant. I mean, the target audience is children, right? If a child sees something like this, he/she will be confused, of course.” 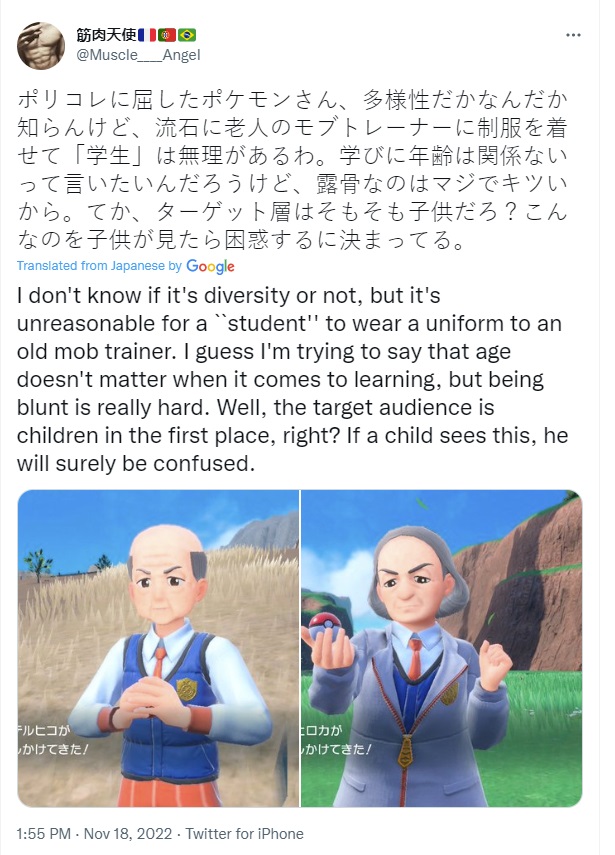 “Is being at the mercy of a big, ugly subject matter political correctness for Pokémon?” they concluded. 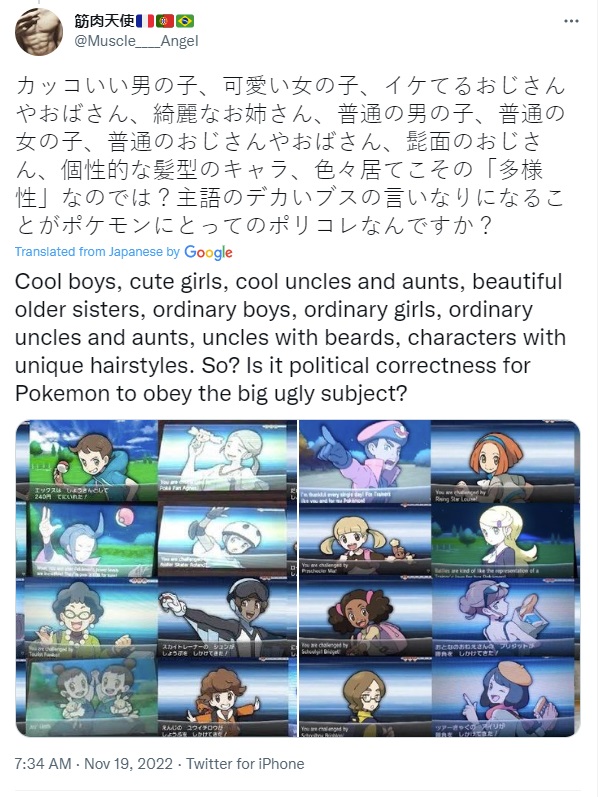 “Pokémon Scarlet and Violet has only ugly characters.” @bree___sih declared. “The female characters are ugly, haggard, and lumpy.  Too many black people. The male characters’ character designs are disgusting, psychopathic, and filthy.”

“The mobs are all trashy and ugly because they sold their souls too much to political correctness,” they wrote. “And there are almost no beautiful, cute, fresh, good-looking mobs to feast your eyes on.” 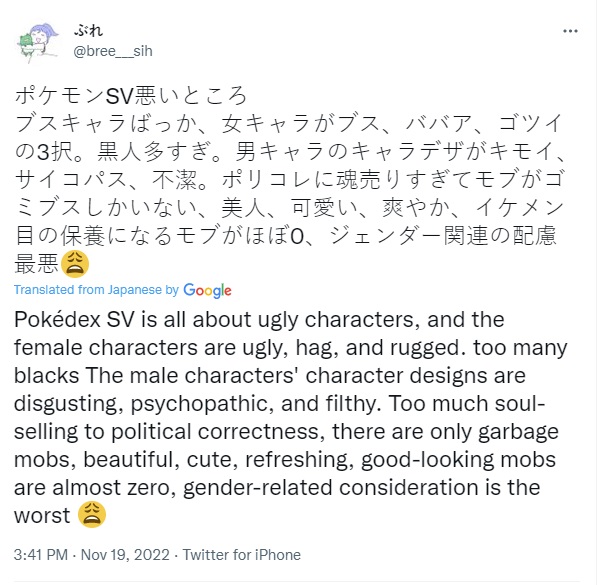 Sharing an in-game selfie of themselves with an older ‘Student’ trainer standing behind them, @yakinorio2021 sarcastically asserted, “Don’t laugh at him! He is not a pervert, but a person who will be a natural part of the future society that embraces diversity.” 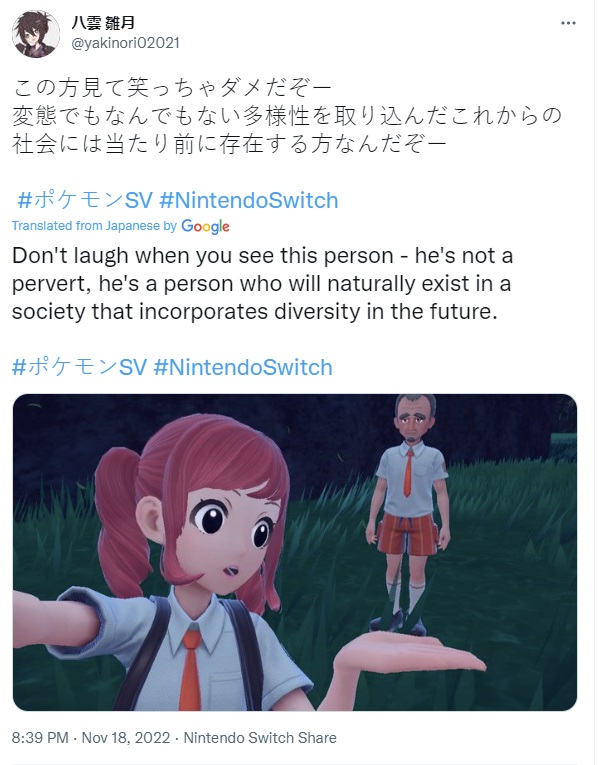 Complaints against the game’s removal of skirts were equally as widespread.

“In Pokémon Sword and Shield, male and female was not in the gender setting of the character creation section,” said @RlubC9. “But she was wearing a skirt.”

“In Pokémon Scarlet and Violet, however, skirts have not appeared since the beginning,” they said. “It’s a blatant restriction, and it’s already politically correct.” 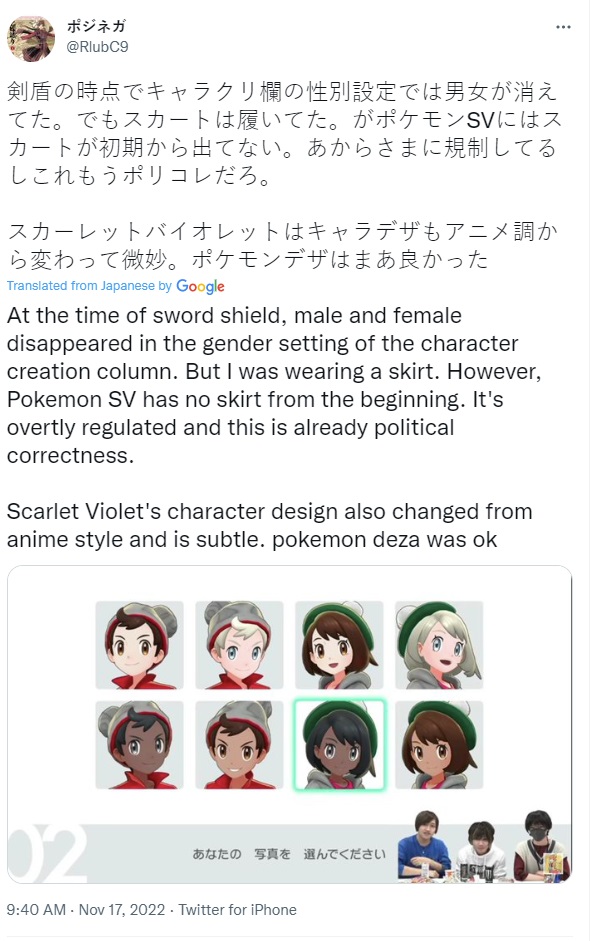 “Pokémon Scarlet and Violet is a lot of fun, but why did they degrade the dress-up function so much?” @Raphaela_aya questioned. 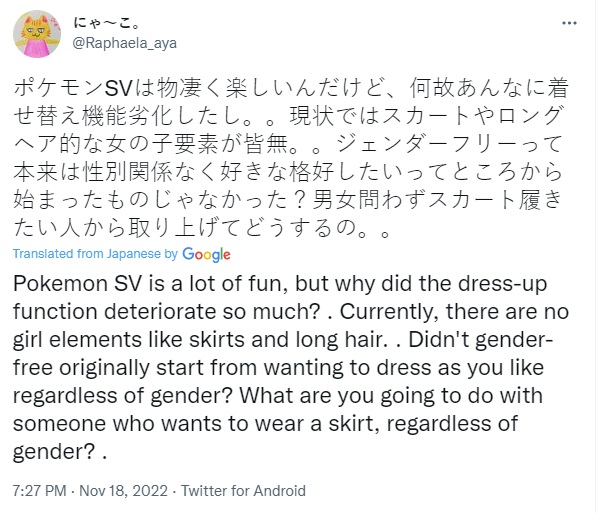 “It’s weird that zero of the characters wear skirts!” exclaimed @hamatea.”There don’t seem to be any outfits like that.”

Speculating that the skirts were removed so “you can’t take a peek at girls’ underwear with the free camera”, the user ultimately declared, “I can’t forgive Gamefreak.” 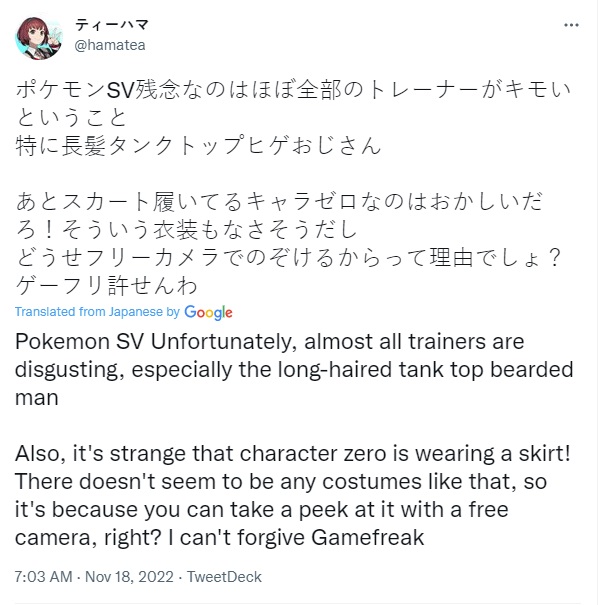 NEXT: Japanese Human Rights Lawyer Accuses ‘One Piece Film: Red’ Of Being “Anti-Revolutionary, Anti-Feminist And Anti-Democracy,” Says Japan Should Take Lessons From Disney