While most fans are presently concerned with whether or not the film will feature an appearance by a certain purple-scaled incarnation of Megatron, director Steven Caple Jr. has assured those concerned with Transformers: Rise of the Beasts‘ human element that the Maximals’ upcoming cinematic debut will “tell a story about [Black and Latin] culture”. 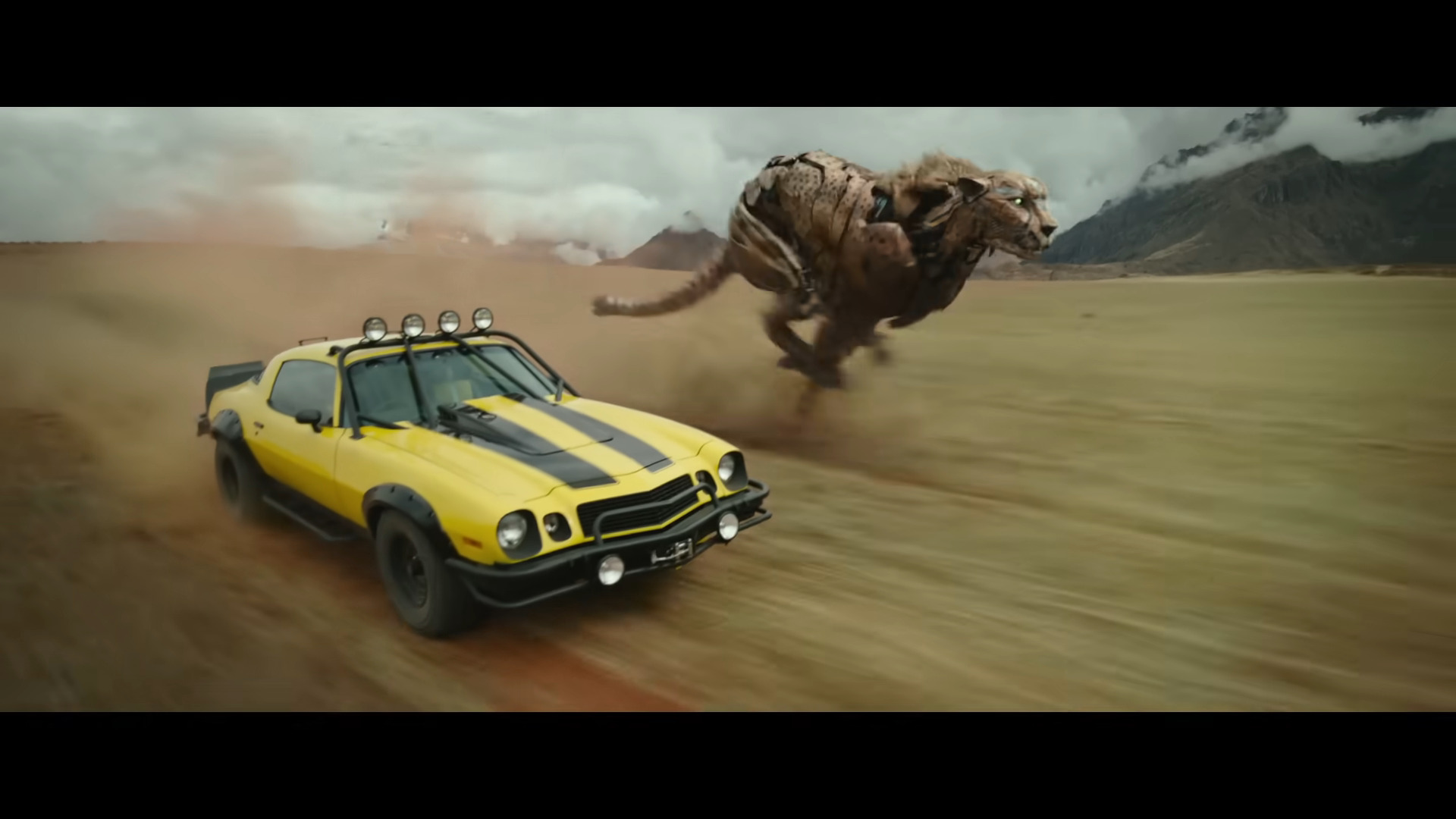 Cheetor and Bumblebee race side-by-side in Transformers: Rise of the Beasts (2023), Paramount Pictures via YouTube

Caple Jr., perhaps best known as the director behind Creed II, revealed this narrative direction for the Autobots’ next Earth-based adventure during a recent interview with BET. 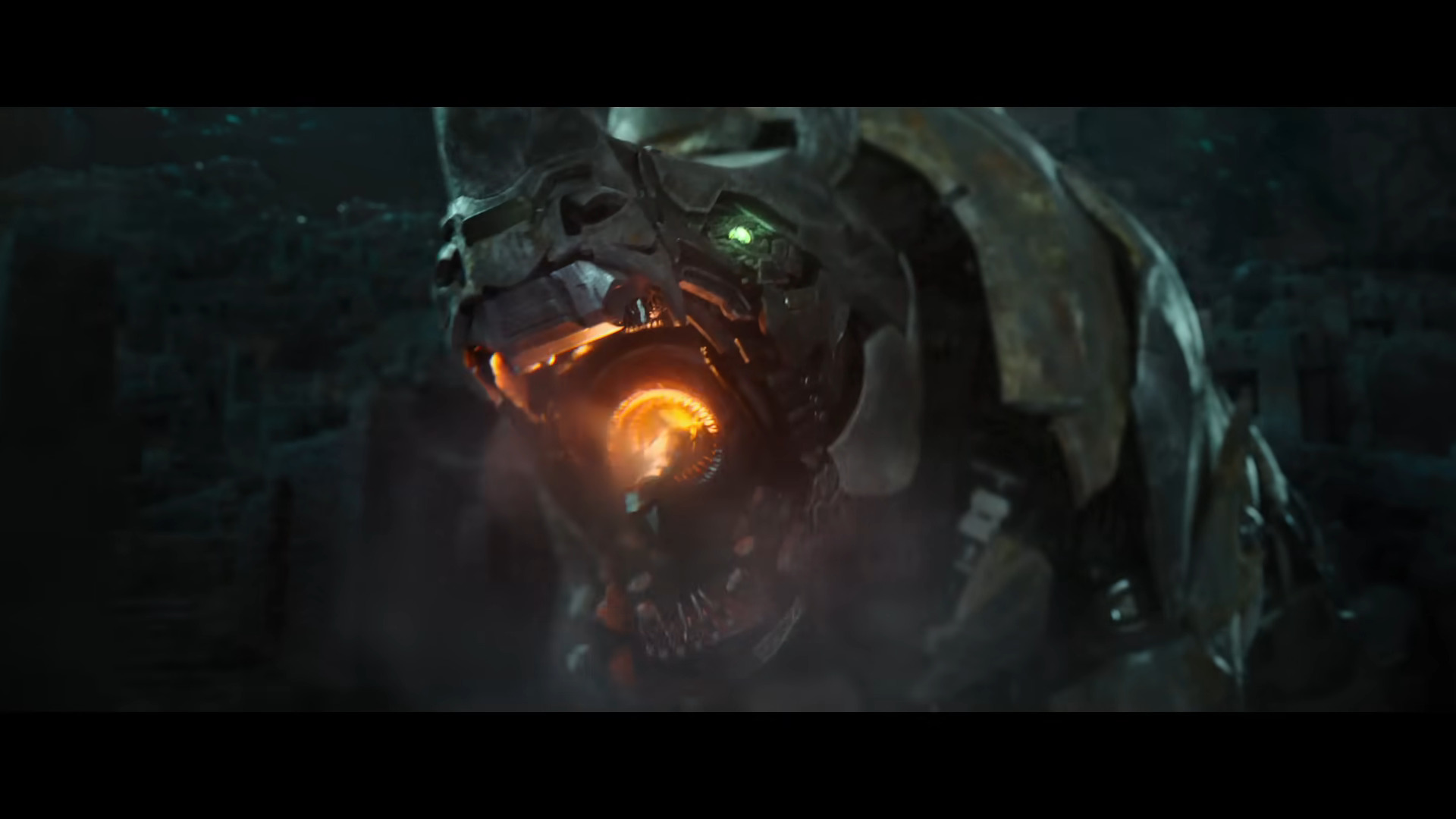 Rhinox roars triumphantly in Transformers: Rise of the Beasts (2023), Paramount Pictures via YouTube

Asked by the outlet for his feelings on being given the reins to such a major franchise, the director jovially observed “You came straight out the gate with that one” before answering in earnest, “It’s been an emotional ride.”

“It’s been two years now — [Transformers: Rise of the Beasts star Anthony Ramos] and I talk about having this type of opportunity but also understanding it’s our time,” he recalled. “For us to be in this position where we can tell a story about our culture, our people, and see ourselves portrayed on the big screen blending in with these vast genres is special.” 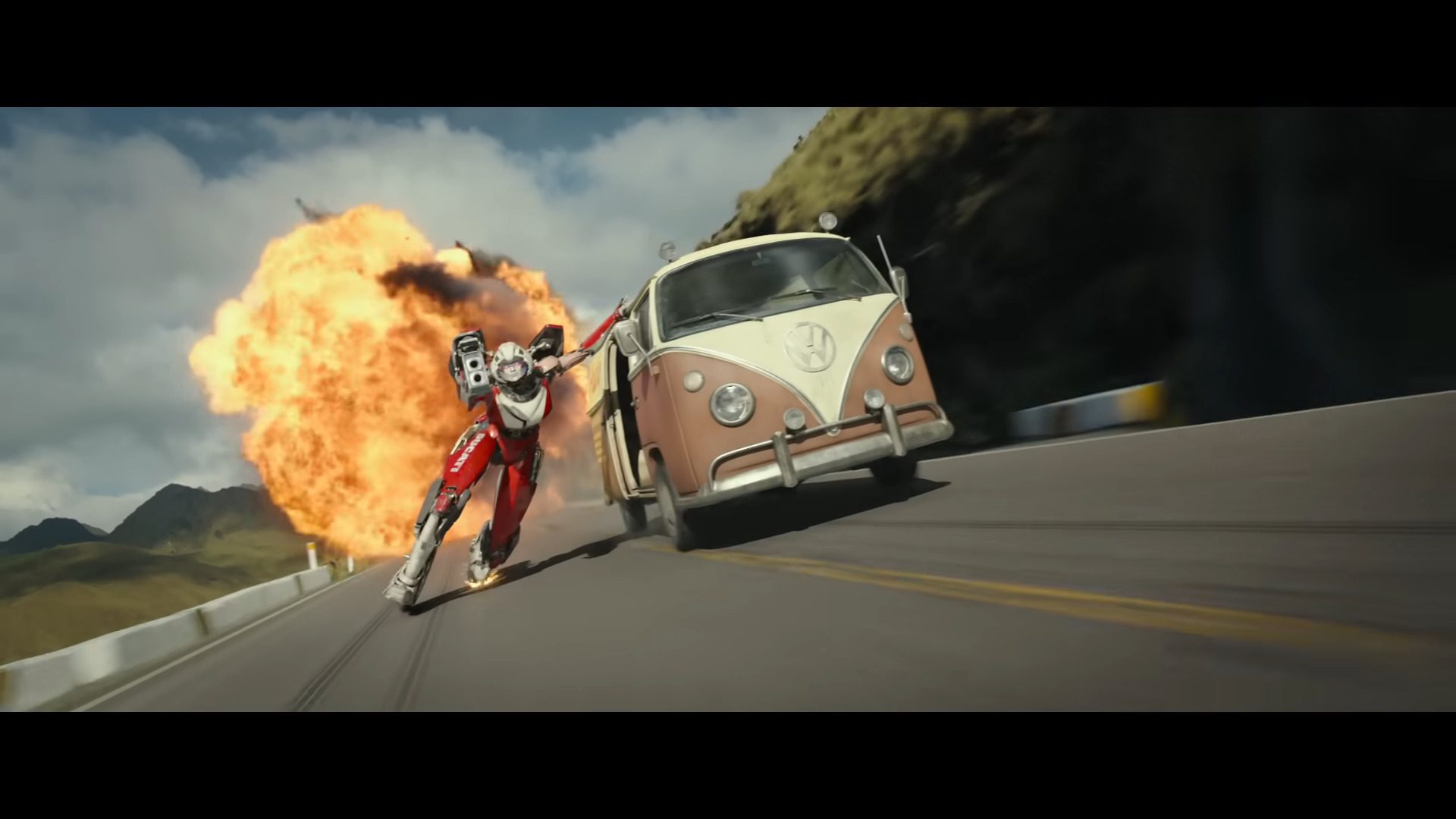 “There are not too many people on the actor or director side to be in this position on this scale and scope, and we’re doing our best to carry this weight,” Caple Jr. then asserted.

“No matter how many times [Anthony] and I look at each other on set, tired and all, we realize we’re able to do something special and for a reason,” the director added. “We created something special, and it feels great to be in this position — super honored and blessed.” 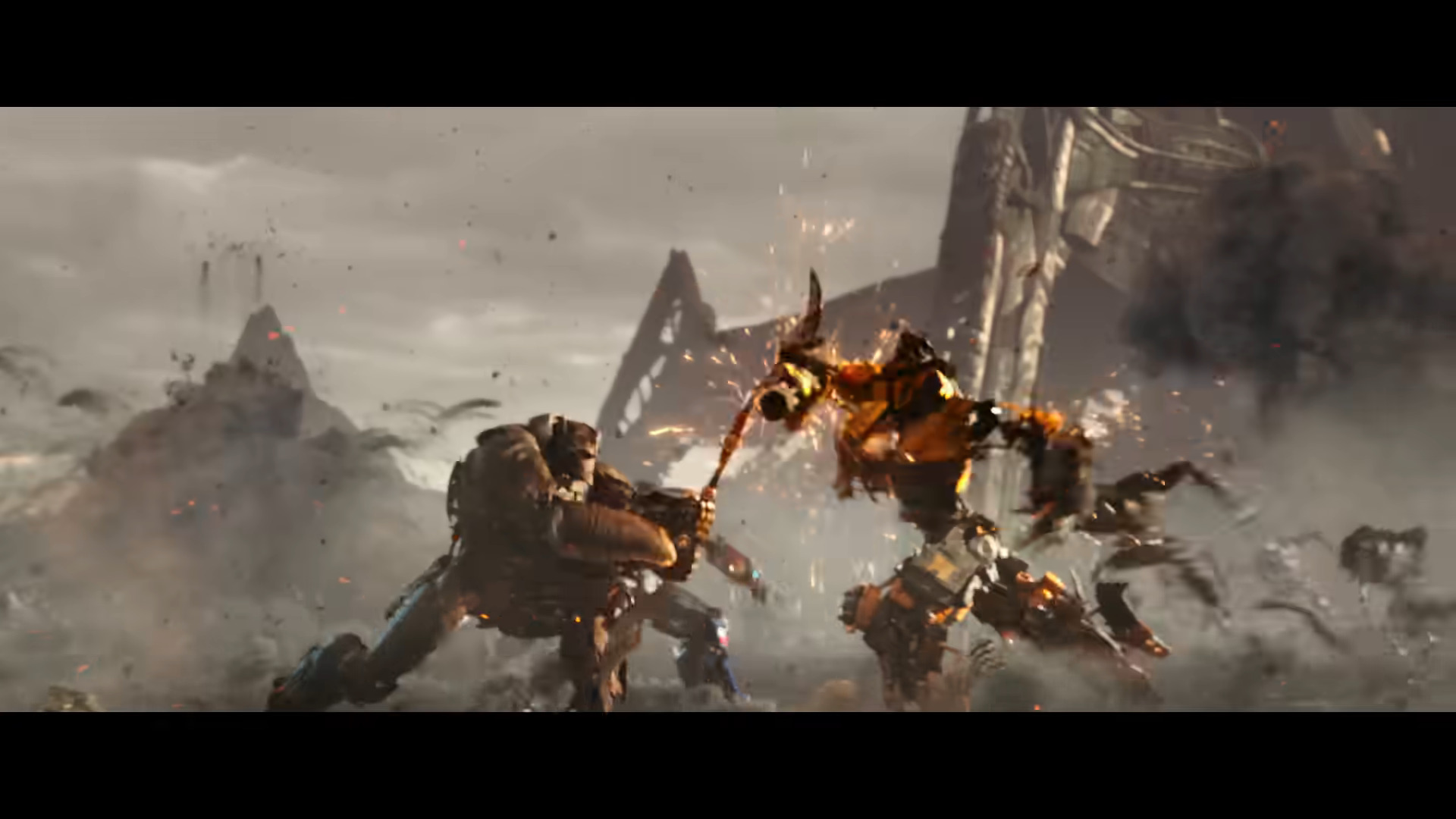 To this end, Caple Jr. then explained the decision to use The Notorious B.I.G.’s popular Juicy track (from his 1994 album Ready to Die), in the film’s first teaser trailer.

“The movie takes place in the 90s when the album Ready Or Die was released, so that’s why [Juicy] was the perfect record to choose,” said the director. “His voice and what he meant in that era and time captures much of what we’re doing in the film.” 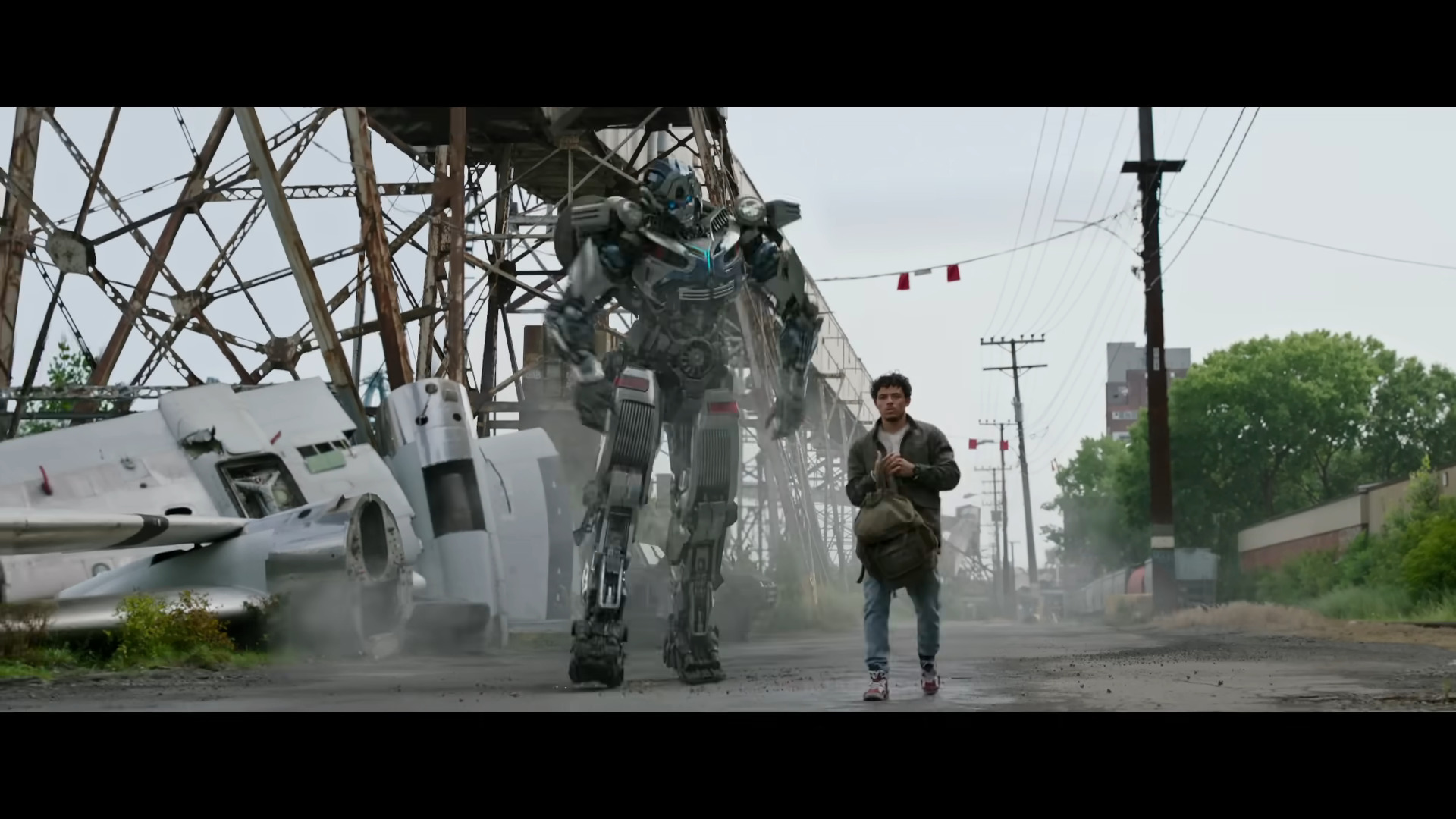 Noah (Anthony Ramos) and Mirage (Pete Davidson) prepare for what comes next in Transformers: Rise of the Beasts (2023), Paramount Pictures via YouTube

“Fishback [portrayed in the film by Black Panther: Wakanda Forever actress Dominique Thorn], who originally is from Brooklyn — her character and Ramos’s character have a lot of big dreams and hit glass ceilings but ultimately become the heroes saving the world discreetly as that’s how the Transformer laws are,” he further detailed. “You have these average folks transforming into something huge and special we didn’t know existed, so the record was a right move — it was our anthem on set, so we played Biggie or Anthony was singing [The Tempations].” 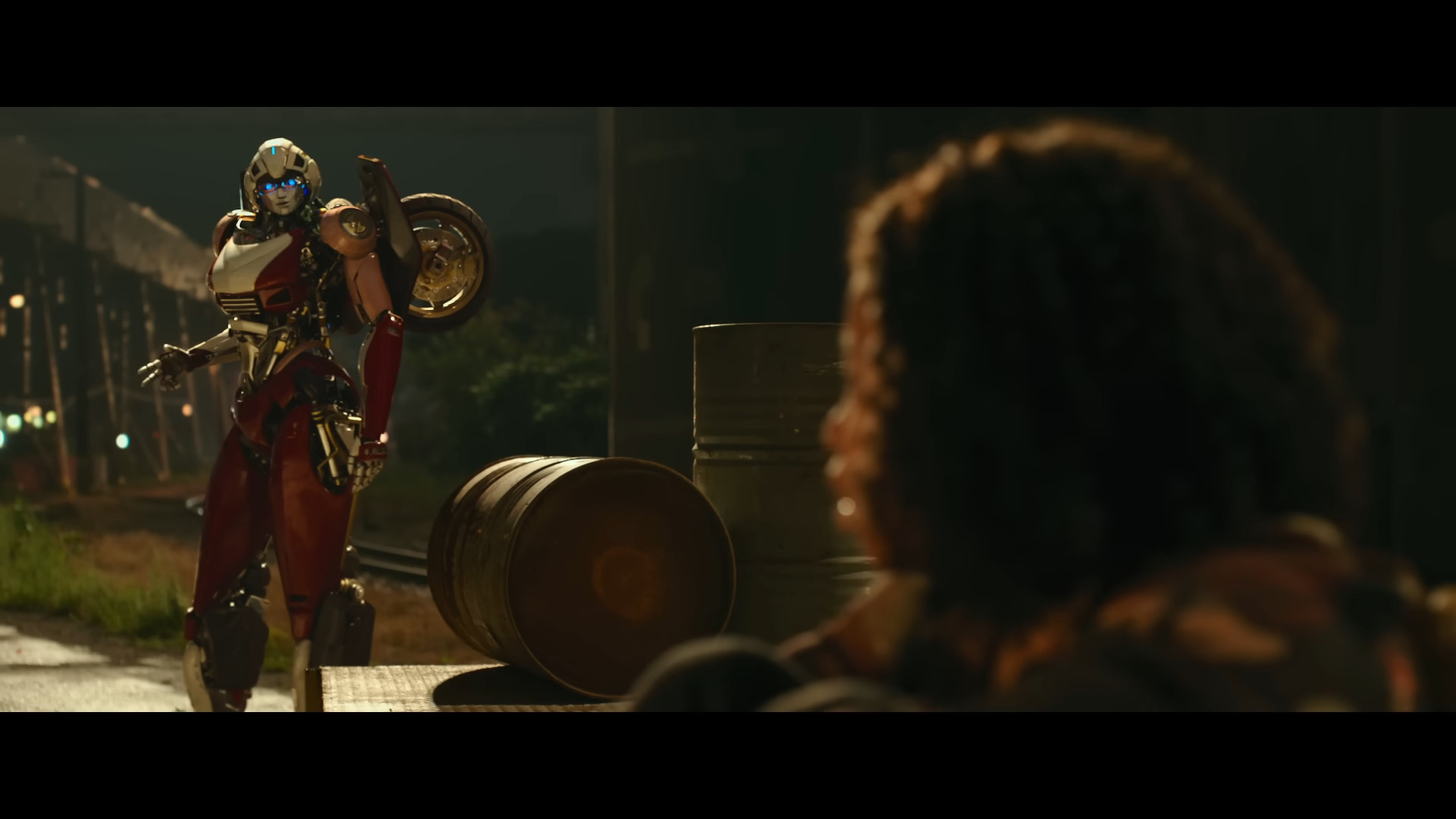 Notably, despite the director’s apparent conviction in his statement, history does not fully support Caple Jr.’s framing that his and Ramos’ 2022 participation in a major ‘geek culture’ project is any sort of breakthrough for representation. 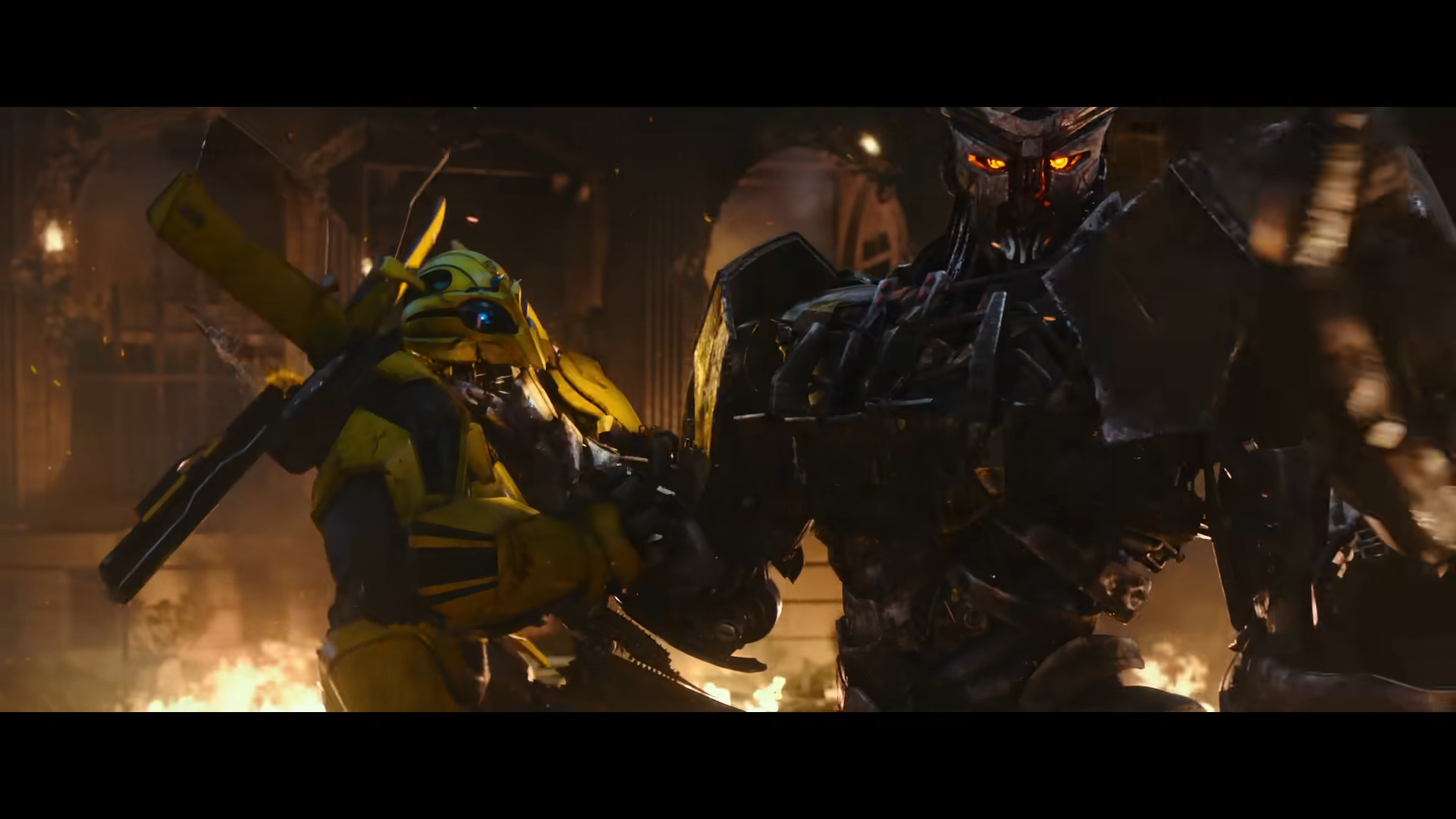 Scourge (Peter Dinklage) holds Bumblebee’s fate in his hands in Transformers: Rise of the Beasts (2023), Paramount Pictures via YouTube

While it is admittedly true that the subculture has seen few black directors behind the camera, Latin directors have long been responsible for some of the most well-regarded pieces of pop culture ever put to screen, such as Robert Rodriguez’s 1993 supernatural action adventure From Dusk ‘Till Dawn, Alfonso Gomez-Rejon’s runs on Glee (love or hate the series, one can’t deny it had staying power) and American Horror Story: Coven, as well as Guillermo Del Toro’s entire filmography.

In fact, a Mexican American director, Michael Arias, was even responsible for one of the most well-regarded Japanese anime films of all time, Tekkonkinkreet.

White (Yū Aoi ) takes in the streets of Takamarachi in Tekkonkinkreet (1999), Studio 4°C via Blu-ray

As for black and Latin actors, where does one begin?

From Lavar Burton as Gordi La Forge in Star Trek: The Next Generation, to Edward James Olmos as Commander William Adama in Battlestar Galactica, to even Steve Cardenas’ time as the second Red Ranger in Mighty Mighty Morphin’ Power Rangers, ‘geek culture’ has not lacked for such non-white actors and characters. 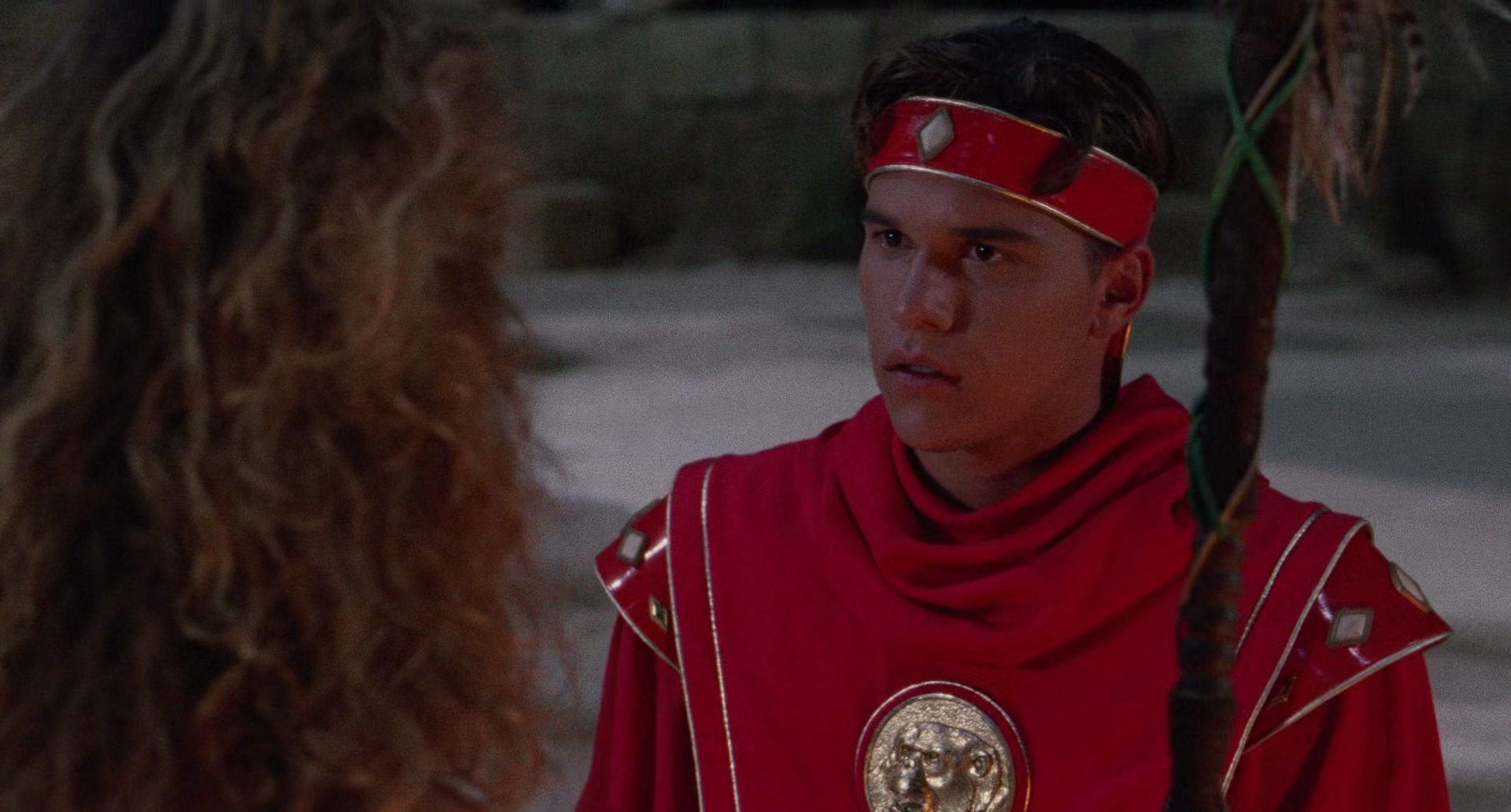 Walter Emmanuel Jr. as the Black Ranger in MMPR. Ricardo Montalbán as Khan Noonien Sing in Star Trek. Michael Jai White as the lead in Spawn. 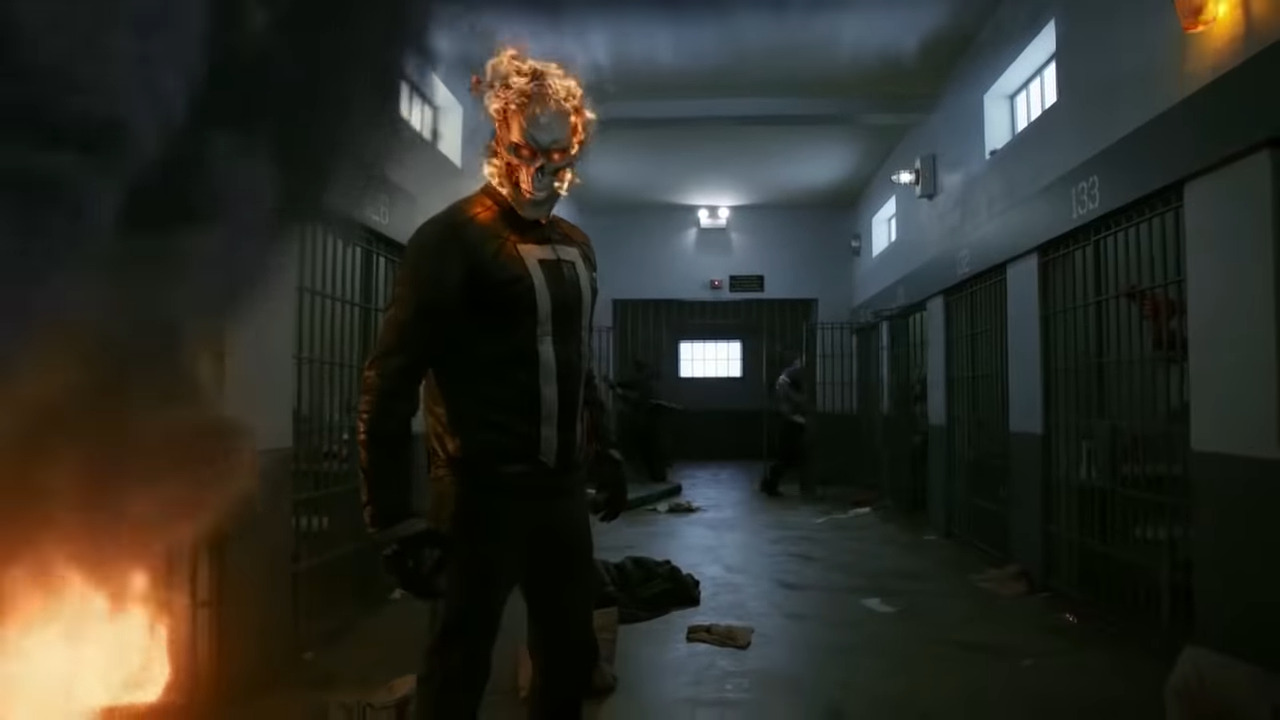 Ghost Rider (Gabriel Luna) emerges from a prison cell after taking revenge upon one of the men who caused his new predicament in Marvel’s Agents of S.H.I.E.L.D. Season 4 Episode 5 “Lockup” (2013), Marvel Entertainment via YouTube

Transformers: Rise of the Beasts is currently set to hit into theaters on June 9th, 2023. 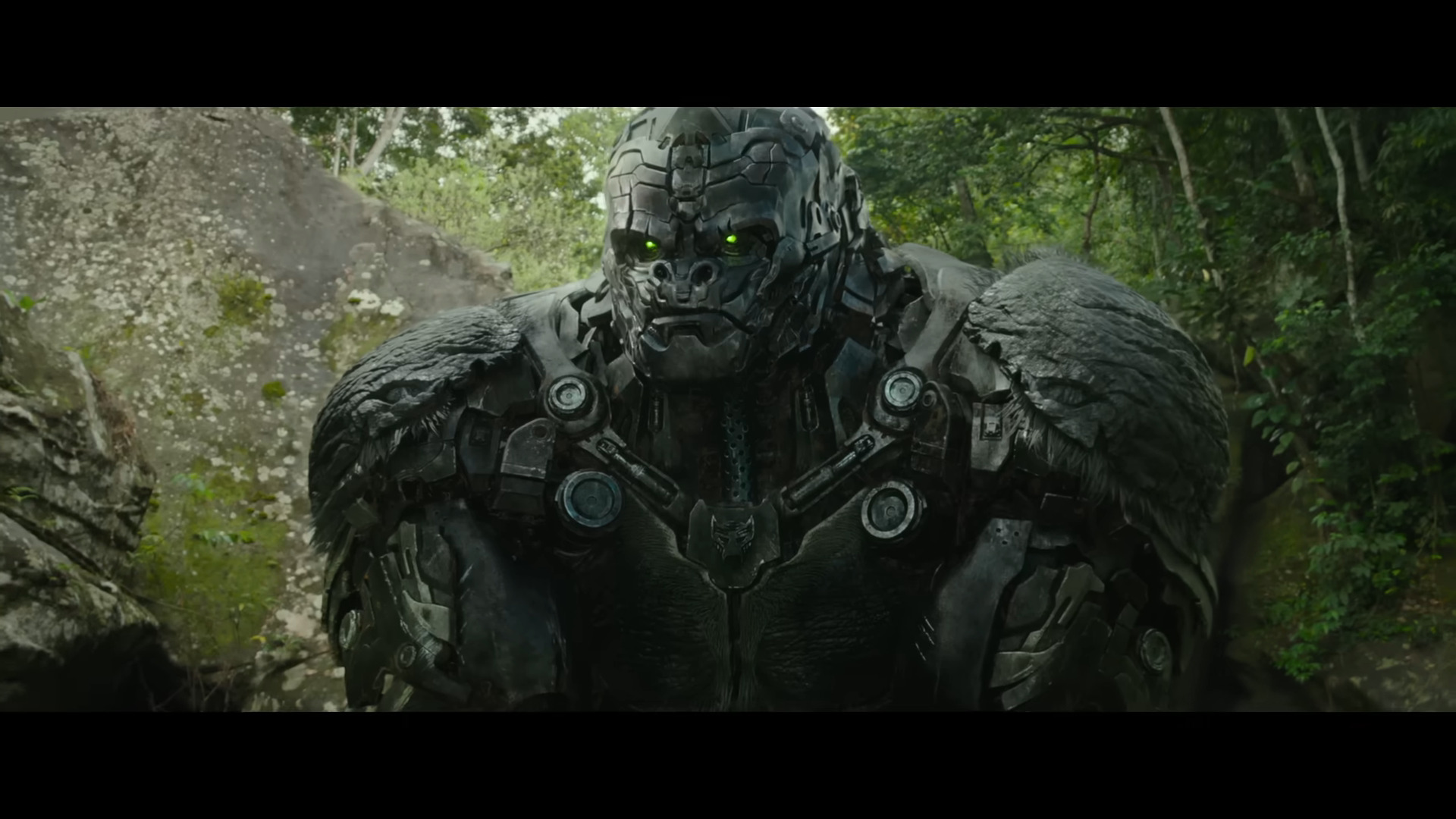 Optimus Primal (Ron Perlman) is a monky, not trukk in Transformers: Rise of the Beasts (2023), Paramount Pictures via YouTube