Labeled as a sequel to the 2021 film New Gods: Nezha Reborn, New Gods: Yang Jian is more akin to a similar film set within the same cinematic universe as Nezha Reborn. Directed by Zhao Ji with a screenplay by Mu Chuan, Yang Jian takes place after what is referred to as an irreparable calamity between heaven and hell. Humans and gods united as the Shang and Zhou dynasties fought for supremacy. The Order of the Gods was created to enforce everlasting peace, which resulted in gods living in caves away from mankind. 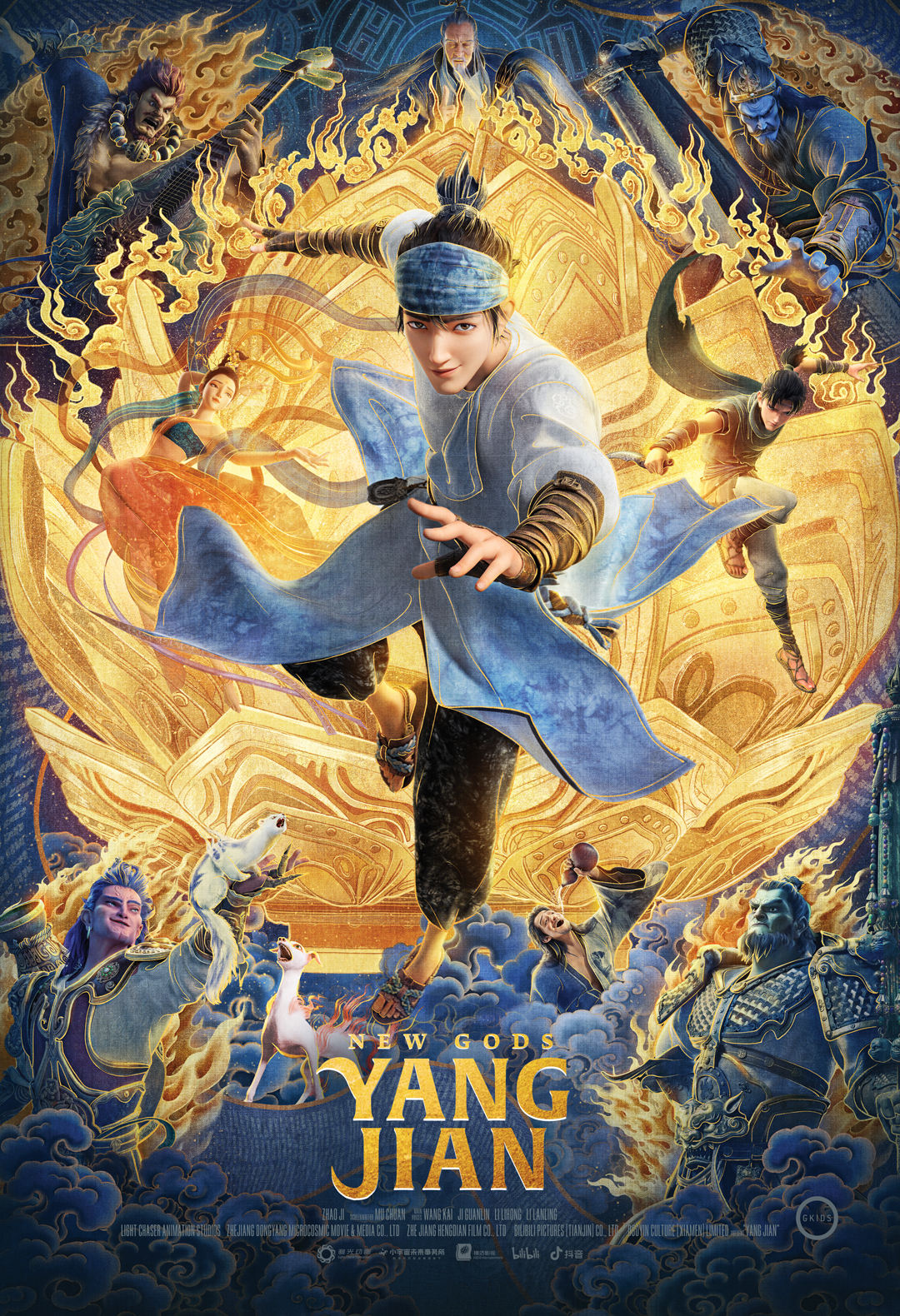 Yang Jian, also known as Erlang Mu, is a former god-turned bounty hunter. He trapped his sister under a mountain thirteen years ago and is now barely making ends meet. He is hired to track down Chenxiang, who is actually Yang Jian’s nephew. Chenxiang is searching for the Lamp of Universal Contentment to free his mother.

However, the power of the lamp has attracted a fearsome rogue’s gallery of warriors from both heaven and hell as Yang Jian attempts to appease his nephew and rectify his past.

The Chinese 3D animated fantasy film boasts some incredible action sequences, but the downside is the majority of them feel like they’re just too brief. In a way, the film sleuths around the majority of its two-hour duration as Yang Jian travels to different locations searching for either information regarding the whereabouts of Chenxiang or he’s trying to beat Chenxiang to the next logical location leading to the lamp.

Action sequence highlights often tie into the characters currently featured in the film. The Mo Brothers, who are trying to retrieve Chenxiang in the name of heaven, use the musical strings of a guitar and an umbrella to fight. Each musical note created by the strum of a guitar becomes a deadly blast that hurls towards an opponent; similar to the harpist fight scene in Kung Fu Hustle.

The beauty of the Immortal Realm in New Gods: Yang Jian. Directed by Zhao Ji. Photo courtesy of GKIDS.

Shen Gongbao is also really awesome and memorable. He fights alongside a white tiger that can heal wounds and whose power is connected to him at all times. Shen is interesting in the sense that he’s a drunk that is constantly drinking yet doesn’t utilize the drunken master technique. Instead, he’s known for his power of duplication.

Similar to the Stand techniques in Jojo’s Bizarre Adventure or even the twin snow dragon/yeti music battle in Scott Pilgrim vs. The World, former gods in Yang Jian are able to summon this giant, cosmic, and super-powered version of themselves. It’s really only referred to as a, “God body,” technique in one instance, but has this colored outline appearance that looks kind of like a constellation.

Fights in the film don’t seem to last long, but that is because the last half hour is totally bonkers. Everything involving the Yin-Yang scroll suddenly turns the film into an animated version of Inception. The film jumps to super surreal and reality-shattering visuals with Yang Jian’s past experiences playing out completely inside out and upside down.

The scroll is meant to be used as a device that traps someone while nearly driving them insane in the process. It’s a high point in the film because it’s so different from everything that came before it.

The beauty of the Immortal Realm in New Gods: Yang Jian. Directed by Zhao Ji. Photo courtesy of GKIDS.

The music of the film is an interesting commitment. Wanluo, the woman who initially hires Yang Jian to find Chenxiang, sings this incredible rendition of Cao Zhi’s, “Goddess of the Luo River.”

The flying elements of the film and the flowing fabrics give Yang Jian a wuxia aspect you don’t often see in any animated film. Yang Jian also plays the harmonica, often, which fits right in with the jazzier parts of the score.

Yang Jian leads a group of struggling bounty hunters and there’s no escaping the fact that it’s basically a ripoff of Cowboy Bebop. There’s a girl on his ship who can transform into a dog who looks just like Edward and the guy always complaining about money and the lack of cosmic gas has a striking resemblance to Jet. Then there’s Yang Jian who’s just as quiet, carefree, and badass as Spike.

Your eye is drawn to the monsters and demons of the film, but they seem to disappear after the halfway point of the film. A five-headed dragon guards the prison while a four-armed creature with no head, a giant eye on its stomach, and eyes on all of its palms operates the cosmic gas station from underground. Demons are a part of the fight sequences and generally have the best character designs, so it’s sad to see them phased out as the film progresses.

Light Chaser Animation is the animation studio behind Yang Jian, Nezha Reborn, and White Snake. In Yang Jian, the studio is at its best when it brings the immortal realms to life. Everything is in the air, vehicles have been modified to be airborne, and clouds seem to have a life of their own.

Lighting is also a fantastic element as it breathes a multi-colored life into cities when the sun sets and lights up the docks at the casino during a fast-paced scuffle with a dim lantern-esque kind of hue. 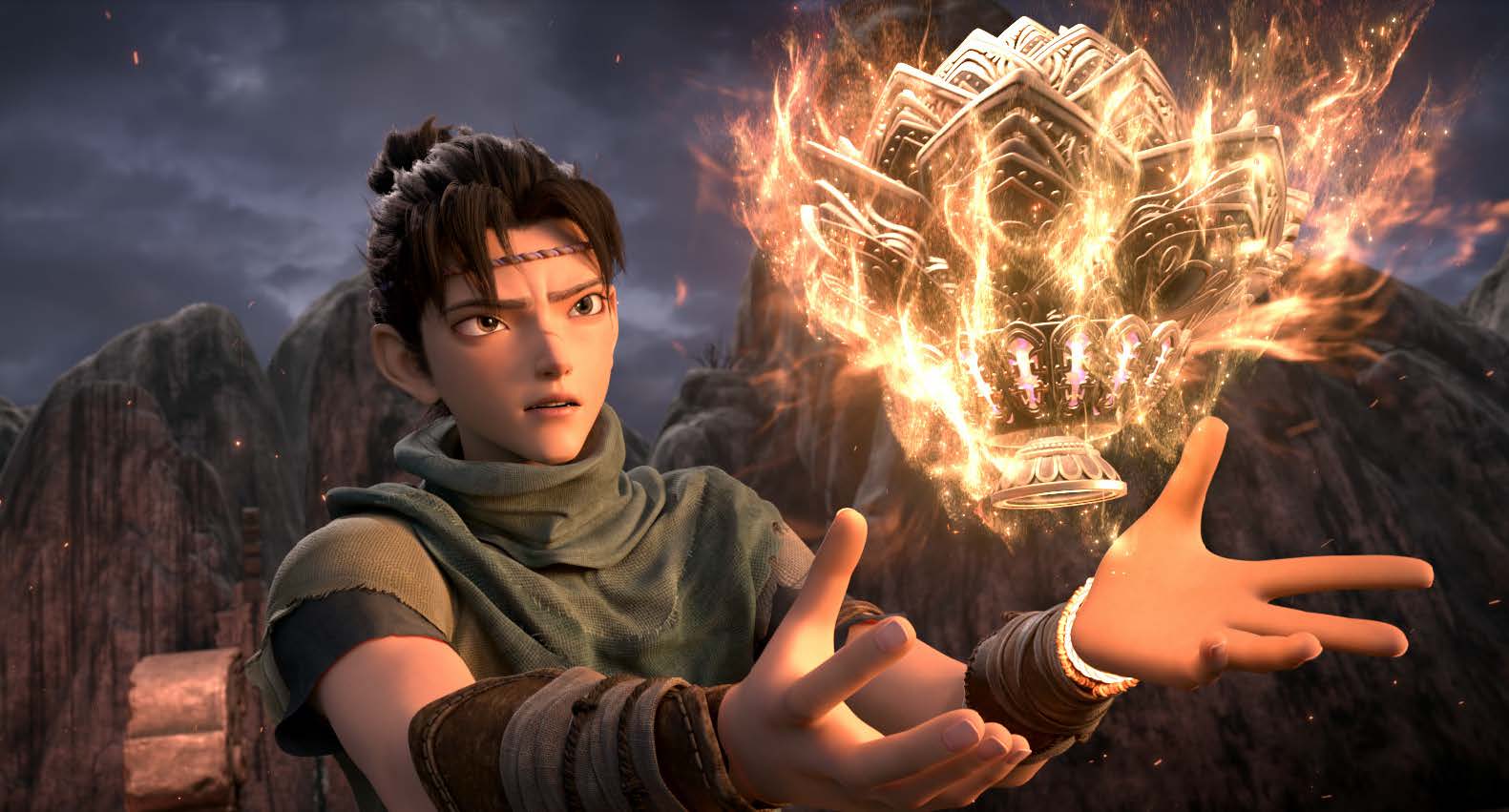 New Gods: Yang Jian feels like an alternate timeline of Journey to the West along with all of the jazzy influence of Cowboy Bebop. The animation is slick and impressive, but the intentional crawl of the storytelling dulls the action and dims the spectacle of the visuals ever so slightly. It simply isn’t as effective or as entertaining as Nezha Reborn, which is currently still streaming on Netflix.