Star Wars novelist and Marvel Comic book writer Chuck Wendig was fired from the company on Friday after repeated attacks against Disney, Marvel and Star Wars fans and consumers.

While Wendig would try to paint himself as a victim, he repeatedly attacked fans calling them all sorts of nasty names like “callous f***necks,” “prolapsed assholes,” “grotestque monsters,” “racists,” “rapists,” “wretched abusers,” and “petty horrors.” He would even call for violence against Trump supporters stating, “They can eat a boot covered in shit.”

Comic book professionals including his former Marvel colleagues have thrown their support behind Wendig and disagree with Marvel’s decision to fire the man who threatened violence on the people who purchase their products as well.

Hey, @ChuckWendig! You’re delightful, a great writer, and I hope today is better than yesterday. This whole thing puts me in mind of the second thing Obi-Wan says to Vader during their fight in ANH – which you, obviously, will know without looking it up.

Hey, @marvel, @WaltDisneyCo, you wanna work with creators who have vision & imagination, better accept they may also express themselves politically (or impolitically!!). When the trolls persuade you to fire a @JamesGunn or @ChuckWendig, they lose, you lose & your audience loses.

Which is not to say @ChuckWendig has anything to apologize for his tweets either. Personally I think social media is arsenic for the soul and poison — absolute poison — for society. But at least most of Chuck’s posts are funny and compassionate. What’s wrong wit that?

While it was indeed Marvel’s call to make, it was a bad call. This was not how you respond to a harassment campaign. https://t.co/soIfY3NfTu

Well, unless Chuck totally screwed up deadlines (doubtful) or refused to take editorial direction (also doubtful) this is a very disheartening move by @Marvel https://t.co/xKcTHDSKO7

I am very sorry to hear what happened to @ChuckWendig.

Hey, @ChuckWendig, I hope you know you’re not alone. Not in this community. We look out for our own. Always will. The rollercoaster goes up and down for us all. I’m sitting next to you, pal.

Wonderful writer & human @ChuckWendig got fired by Marvel this week for tweeting about politics.

If you think that’s b.s., buy one of his books. I know you’ll enjoy them. https://t.co/WYbePj0Uzg

That doubtless won't salve the anger many will feel about Chuck's situation. Let's just aim to draw a distinction, until more is known, between a great talent being UnHired, and any overt corporate antipathy towards LGBT. I don't think Chuck is accusing anyone of the latter. 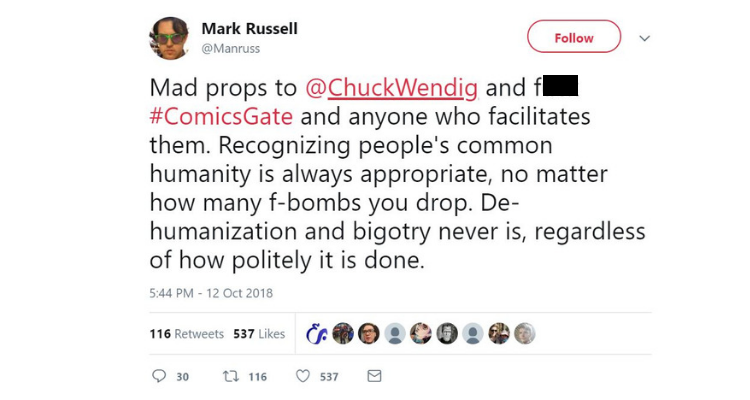 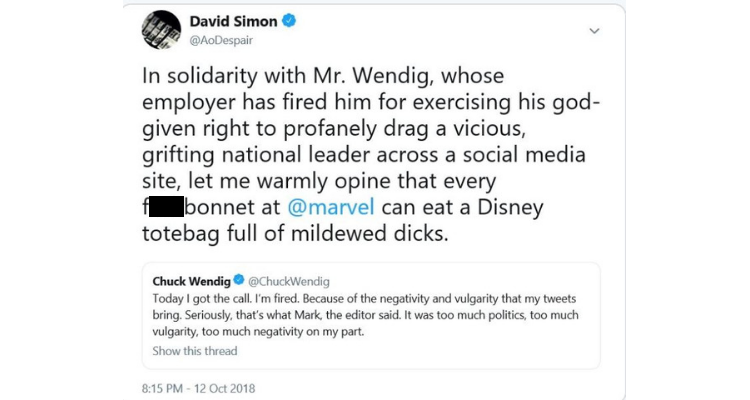 What do you make of these professionals who have supported Chuck Wendig?