Rotten Tomatoes redesigned their website removing the audience interest score on movies that have not been released yet including Captain Marvel.

The redesign comes after numerous websites ran fake news stories stating that users were “review bombing” Brie Larson’s Captain Marvel film. These websites which include The Hollywood Reporter, ComicBook.com, ComicBookMovie.com, CBR.com, and others lied to their readers stating individuals were posting reviews for the film when the film had not even come out yet. In fact, users were only able to provide whether they are interested in the film or not.

The new redesign appears to make it crystal clear to the fake news peddlers at these websites that there are no audience reviews yet. However, you can still see how many people are interested in the film. One thing that does look suspect is that it doesn’t appear to show how many people marked they were uninterested anymore.

You can see below that there is no audience or critic score yet, settling the fact that individuals were not “review bombing” Captain Marvel. You can also see that there is a button below both review scores that appears to show how many people are interested in seeing the film. 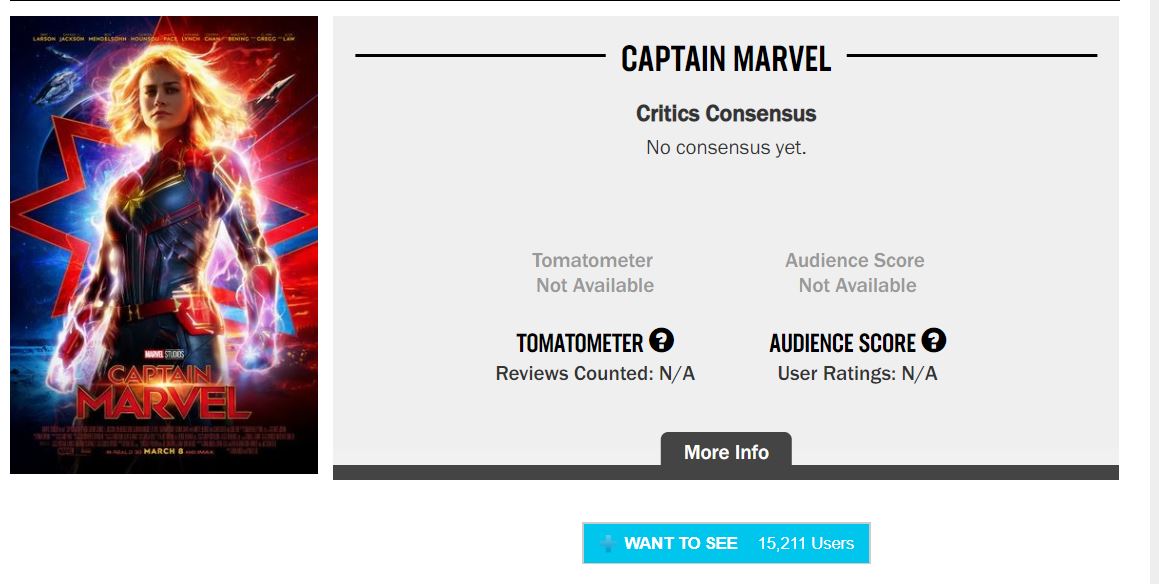 It’s unclear how accurate the button is. When I attempted to click on it, it asks you to login to the website. I did so and clicked the button and it added the film to my “Want to See” list. However, it did not update the actual number on the button.

On your user profile, there is also a “Not Interested” category, but I did not see how you would add a movie like Captain Marvel to that list from the film’s page if you were so inclined.

Audience comments on whether or not they are interested or not interested in seeing a movie do not appear to have been changed.

Here’s what a film’s page looks like that has already been released into theaters:

For comparison sake, here is an example of what the Captain Marvel page used to look like. Rotten Tomatoes used to show you a percentage of fans who were interested in the movie.

While Rotten Tomatoes’ changes prove that many of the websites were running a false narrative about review bombing, it also appears they attempted to scrub any kind of negative feedback for upcoming movies. A number of individuals had responded negatively to Captain Marvel due to what they viewed as poor marketing involving lackluster trailers and promotional material. Others objected to lead actor Brie Larson’s injection of politics into the marketing campaign which involved calling for less white men on her press tour and referring to the press tour as her form of activism among others.

What do you make of these changes to Rotten Tomatoes? Do you think they made the right decision? Do you think any publications will admit they posted Fake News?