John Wick Chapter 3: Parabellum has a 97% score from 32 reviews.

Jake Coyle at the Associated Press gives the movie 3/4. He writes, “With a seamless mix of CGI and stunt work, Stahelski fluidly choreographs ballets of bullets and endless violent encounters across a grim cityscape.”

Brian Truitt at USA Today gives the film a 3/4. He writes, “It’s almost a karmic answer to everything else in the action-movie genre, where there’s usually a distinct lack of responsibility in the wanton violence: In the “Wick”-verse, a bloody action usually leads to much more trouble later.”

Kate Hughes at The Hollywood News gives the film a 5/5. She writes, “From the explosive opening, to the epic finale, John Wick Parabellum is an adrenaline charged assault to the senses. A cacophony of bullets, broken glass and samurai swords, it launches everything in the arsenal to send the franchise out on a high.”

Robert Kojder at Flickering Myth gives the film a 5/5. He writes, “At this point, the John Wick movies are becoming a new drug, so go get your fix. Prepare for more than war, prepare for constant exhilarating anarchy.”

Andrew Barker at Variety gives the film a rotten review. He writes, “Watching “John Wick 3″ is an exercise of pure aesthetic desensitization – the violence we see here is entirely removed from the reality of pain, or suffering, or fear, or desire, or triumph, or loss.”

Not only did Rotten Tomatoes release their Tomatometer score, but Metacritic also revealed their Metascore. The film has a 73 from 17 reviews with 15 positive and 2 mixed. 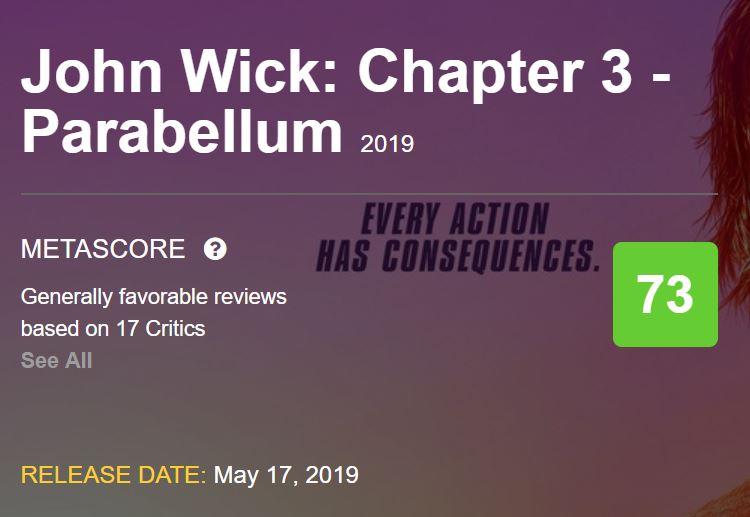 Robert Abele at The Wrap gives the movie a 68. He writes, “How are the action sequences? They’re fun until they feel familiar, and even then they’re still a trip because the long takes demand admiration for the sheer brute exertion at work.”

David Ehrlich at IndieWire gives the film a 75. He writes, “Giddy, exhausting, and breathtakingly violent.”

Nick de Semlyen at Empire gives the film an 80. He writes, “Combat-heavy pulp of the highest order, this is the most enjoyably over-the-top entry so far. Where else can you get samurai dogs and a Tarkovsky reference?”

Tim Robey at The Telegraph gives the movie a 60. He writes, “Stuntman-turned-director Chad Stahelski honours the choreography first and foremost – there’s none of the choppy editing that can often cover for this-will-do blockbuster combat, but bravura long takes which push the stuntmen and Reeves (with a lot of digital assistance) to the limits of their presumed endurance.”

What do you make of the critics reaction for John Wick Chapter 3: Parabellum? Are you excited to see the film? Do you plan to see it in theaters?