Paul Watson, the Social Media Manager for the video game news site Eurogamer, has been accused of selling a vinyl record of the Super Mario 64 soundtrack without acquiring permission or the license for the music from Nintendo.

On June 3rd, Jeremy Hambly of The Quartering posted a video to his channel, Eurogamer Caught Selling Illegal Nintendo Bootlegs & STOLE The Money, wherein Hambly discusses Watson’s vinyl record production endeavor, the subsequent failure of Watson to fulfill his preorder obligations, and the fan outrage towards the failure to provide the completed record:

According to a “confidential informant,” Watson is the founder and owner of Raygun Records (not to be confused with the original Raygun Records, which was founded in 1998), a newly-established record label whose first release was promoted as a vinyl pressing of the Super Mario 64 soundtrack originally composed by long-time Nintendo composer Koji Kondo. While Watson is not named specifically on any of Raygun Records’ social media posts, Hambly’s informant provided a screenshot taken from the Video Game Vinyl Collectors private Facebook group wherein Watson links himself to the Super Mario 64 record:

“Hello! A quick one. I won’t be posting much about SM64 here until it’s go time. But you could follow this Instagram page, if you like…”

As further evidence of Watson’s ties to Raygun Records, the informant also provided screenshots of a fan who unsuccessfully attempted to cancel his order of the soundtrack receiving assistance regarding his order by Watson himself:

“Paul Watson: Hey Michael. Please feel free to DM me here. My email inbox is very full atm, but let’s get this sorted for you

As further proof of Watson’s connection to the record, the informant also points out that Anni Sayers, the artist responsible for creating the soundtrack jackets, has also worked for Eurogamer, specifically by providing art work used on their site.

When the soundtrack went up for pre-order, Raygun Records raised thousands of dollars, with one Facebook poster claiming that the money resulting from this pre-order was approximately $17,400. Yet, almost immediately, the production ran into issues. According to the Raygun Records Instagram page, Raygun Records previewed a finished record jacket and indicated that the discs were to begin printing around November 1st, 2018: 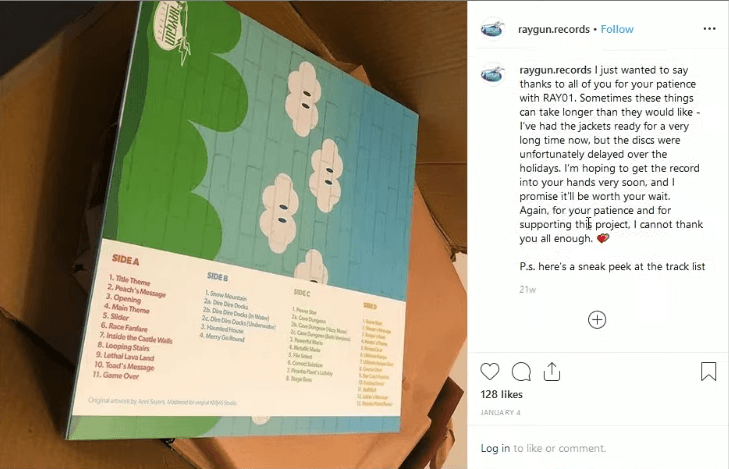 During the course of writing this article, Raygun Records deleted this post, but it can be viewed in full thanks to the above screencap.

Two months later, on January 4th, Raygun Records informed their fans that the pressing of the discs was delayed over the holidays and stated that production was moving forward but failed to provide an updated estimated date of release: 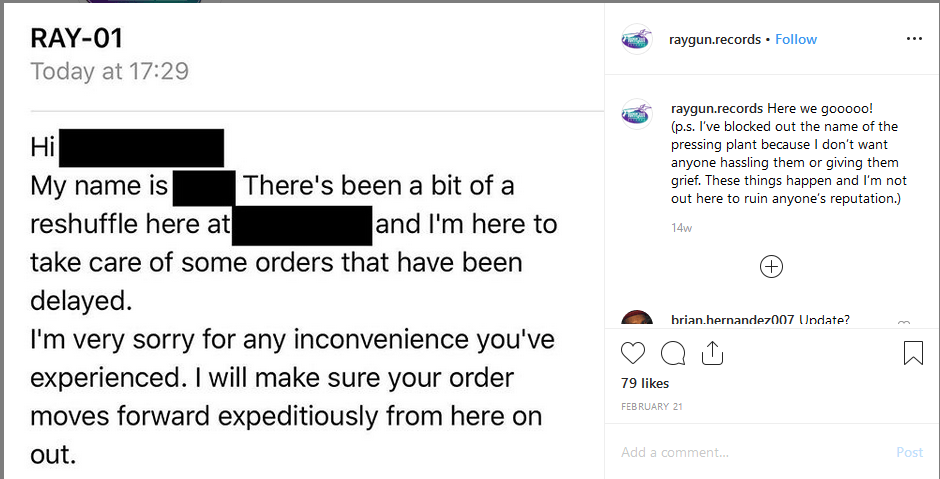 While both this post and the one above it remain live on Raygun Records’ Instagram, they have been presented here as screenshots for posterity.

Following these posts, Raygun Records Instagram page went quiet, as no new updates have been made since February 21st, 2019.

The next communication from Watson would come in a lengthy post to the Video Game Vinyl Collectors group by a customer who posted Watson’s response on his behalf due to Watson allegedly “having trouble with his Facebook account.” In the post, Watson would again explain that the printing issues were caused by the actions of the printing plant and fail for a third time to provide any concrete or approximate release date:

“Hello! It’s long awaited update time. One of the reasons that it’s taken so long is that I hoped that by this point I might have better news. As you might remember, my last update was a screenshot of an email from my pressing plant. My contact at the pant had vanished from existence, and after months of trying to get touch [sp], I heard from a brand new guy. He apologised for the lack of communication and promised that they would fast track the production of the records. That was months ago.

Since then, I’ve heard nothing from the plant, in spite of repeated emails and phone calls which seem to go to an unmanned phone Obviously this is not great. At this point, I’m perusing a few options. The first, and the one I’m investing most of my time into are my legal options. Ideally we can get the money back and pass it to a more reputable plant who can press these for us. Another option is that members of this board have offered to visit the plant to see what’s up. We are currently weighing this one up right now.

I can only apologise for the wait that you’ve all had to deal with. I am devastated that the plant has let us all down this badly. The situation has left me with constant stress and anxiety, and regular sleepless nights. I want you to know, however, that I refuse to leave you all high and dry. This record WILL get pressed. I hope the four boxes of record sleeves that are currently taking up most of the space in my room will stand as a testament to this promise.

I know what it’s like to be let down by labels, and I refuse to do that to you. Once again, I apologise for the wait so far, and if you you [sp] give me your understanding, I am very fateful for it. You’ll get your records – you have my word.”

Yet, as of this writing, no customers have received their records and there has been no indication that the records have been shipped or even pressed, with some even beginning to speculate and accept that they had ultimately been scammed by Raygun Records.

However, most troubling of all is that it appears Raygun Records did not have legal permission from Nintendo to release the record. There is no indication on any of Raygun Records’ social media posts that they had legally acquired the license to use the music from Super Mario 64; in contrast, when iam8bit released their Hero of Time: Music from The Legend of Zelda: Ocarina of Time and Johto Legends: Music from Pokemon Gold & Silver, iam8bit publicly noted that they had acquired the licenses for both the Zelda and Pokemon tracks, respectively. Also curious is the absolute lack of news articles discussing the upcoming release, as the previously mentioned releases of the Ocarina of Time and Gold & Silver soundtracks were heavily covered by large outlets such as Polygon, IGN, and Forbes, yet a total of zero articles exist discussing the Raygun Records pressing of such an iconic soundtrack.

According to Hambly, Watson has since taken down the Raygun Records storefront.  Following the posting of Hambly’s video to YouTube, Watson has also locked his Twitter account and has not yet given a public statement regarding these accusations. In the course of writing this article, Raygun Records also began deleting pictures of the finished vinyl jacket from their Instagram page.