A prevalent rumor Andy Serkis will play a villain in Matt Reeves’ The Batman is growing stronger but he may not be playing the role we think.

Sources are telling Batman on Film Reeves and Warner Bros. are considering Serkis for a role. The 55-year-old British actor has been mooted in the past for The Penguin, who is believed to be the main villain of the piece.

However, the site notes that Serkis’ casting might not happen. “The…word on the street” according to BOF is WB’s character breakdown for Penguin shows preference to someone “short, obese” and between “20-40.” Andy Serkis is outside that range, not that it should stop a man of his talents.

Serkis is a stalwart of franchise material. His working relationship with Matt Reeves goes back to when he played Caesar in Reeves’ [easyazon_link identifier=”B00LP9G64O” locale=”US” tag=”boundingintocomics-20″]Planet of the Apes[/easyazon_link] epics. Star Wars fans will know him best as Snoke in The Force Awakens and The Last Jedi. Before all that, he provided the motion capture for the Eighth Wonder of the World in Peter Jackson’s remake of King Kong. 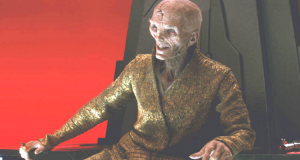 Josh Gad, who fits the above description, was brought up as well by fans and various outlets in reference to Oswald Cobblepot and The Batman over the last couple of years. But Gad personally dispelled that speculation recently, after stoking the flames for a while and receiving some fan art of how he might look.

Ok, seeing as I keep getting this question…as much as I have LOVED torturing you all with teasing you about the Penguin, I feel like it’s time to tell you…I’m NOT actually playing this character. But I’ve thoroughly enjoyed the fan art and the love. 😂😘 https://t.co/fsasvbRTqN pic.twitter.com/igwnT2NNPw

Serkis played Ulysses Klaue, his only live-action performance of the lot, twice in the Marvel Cinematic Universe. For The Batman, the expectation is he’d appear on camera.

His place as The Penguin in the DC Extended Universe sounded secure enough a year ago when the rumor began. Variety reporter Justin Kroll tweeted his sources were saying Penguin was going to be in either The Batman or Birds of Prey.

Two weeks prior, Matt Reeves was tagged in a question regarding the odds of Andy Serkis being in his picture. Reeves didn’t confirm or deny but — in a deleted reply — he had nothing but good things to say about Serkis and his acting:

“Andy Serkis in ANYthing! He is the BEST! Regards back!”

It’s important to remember not much is official yet and BOF, Kroll, and others continue to caution Serkis’ consideration for anything is rumor and innuendo that requires a grain of salt.

Locked in to appear as Bruce Wayne and Batman is Robert Pattinson. The Twilight heart-throb and Good Time star landed the coveted role back in May after a long and arduous process that culminated in dueling screen tests between him and Nicholas Hoult.

The Batman is written and will be directed by Matt Reeves. It’s produced by him and Dylan Clark. Release is set for June 25, 2021.