After enticing fans with a shot of Rey wielding a dual-bladed red lightsaber and appearing to have joined the Dark Side in Star Wars: Rise of Skywalker footage shown at the recent D23 Expo, Disney proceeded to accidentally spoil the mystery of ‘Dark Rey’ in a post on the official Star Wars website.

***MAJOR SPOILER FOR STAR WARS: THE RISE OF SKYWALKER AHEAD***

In a blog post titled D23 Expo 2019: New Star Wars: The Rise of Skywalker Footage and More Highlights from the Walt Disney Studios Panel, Disney discussed five highlights from the Lucasfilm segment of the Walt Disney Studios panel. Among these highlights was the new footage which debuted at D23, though when discussing this new footage Disney referred to ‘Dark Rey’ as a vision, thus spoiling the entire concept of “Dark Rey.” (Related: J.J. Abrams on Star Wars: The Rise of Skywalker: “Episode 8 Didn’t Really Derail Anything”) 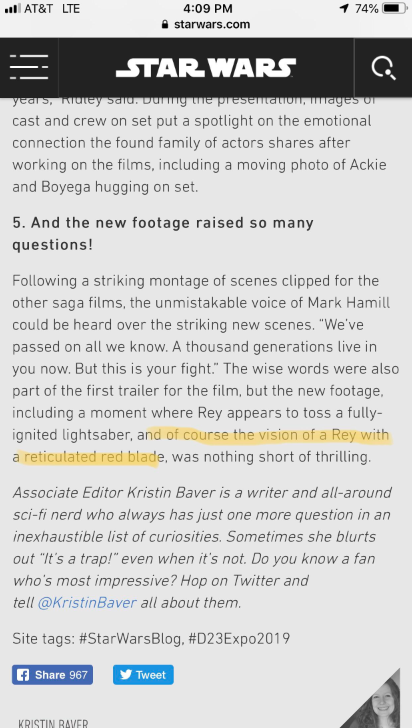 A screenshot of the page as it originally appeared upon it’s initial publication on August 24, 2019.

After this leak was discovered by fans across the internet, Disney edited the blog post, which now refers to the image as a “sight” of Rey. (Related: Alleged Star Wars: The Rise of Skywalker Leaks Reveal How Emperor Palpatine Returns)

5. And the new footage raised so many questions!

Following a striking montage of scenes clipped for the other saga films, the unmistakable voice of Mark Hamill could be heard over the new scenes. “We’ve passed on all we know. A thousand generations live in you now. But this is your fight.” The wise words were also part of the first trailer for the film, but the new footage, including a moment where Rey appears to toss a fully-ignited lightsaber, and of course the sight of Rey with a reticulated red blade, was nothing short of thrilling.

Though some have speculated that this may have been changed in order to avoid any misconceptions about the movie, the use of the term vision has very specific connotations in the Star Wars universe. Anakin Skywalker foresaw a Force vision of Padme dying, which led him to fall to the Dark Side in Revenge of the Sith, Luke Skywalker rushed to save his friends after seeing them in danger on Cloud City in Empire Strikes Back, and Rey experienced a Force vision of her past and future upon touching Luke’s lightsaber in The Force Awakens.

And maybe the most famous vision came when Luke battled Darth Vader on Dagobah. Upon beheading Vader, he sees his own face behind the mask of the Sith Lord.

If ‘Dark Rey’ was referred to originally as a vision, it’s likely that her conversion to the dark side is nothing more than a Force-induced image.