Funimation became a recently trending topic on Twitter after leaked audio of various Dragon Ball voice actors making off-color jokes and statements surfaced on the internet, with many accusing Funimation of hypocrisy due to their cited reasoning for taking action against Dragon Ball Super: Broly voice actor Vic Mignogna.

Here’s a link to all the audio that @ToeiAnimation might care about from @FUNimation #toei #funimation #FuniLeaks https://t.co/Z0f5UyVVgN

These audio recordings feature outtakes by the voice actors, presumably done during recording sessions, which were intended to be humorous. These include:

Voice actors messing around in-character is an extremely common phenomenon which can be seen across the industry, from Tom Kenney swearing in-character as SpongeBob Squarepants, the entire cast of the 2002 Berserk dub substituting their real lines for humorous alternatives, or David Hayter regularly reprising his role as Solid Snake to intimidate with poker opponents or inform fans that they’re missing “the greatest anime expo in history.” (Related: Date Set for Dismissal Hearings as Funimation Provides Supplemental Evidence in Ongoing Dragon Ball Super: Broly Voice Actor Vic Mignogna’s Defamation Lawsuit)

The majority of the outrage against Funimation was not because of the content of the voice actors’ recordings, but because of Funimation’s blatant hypocrisy. One of the regularly cited incidents which led to Mignogna’s firing from Funimation was the infamous “jellybean” story, in which Monica Rial believes that Mignogna eating a jellybean with her name on it and then stating that he “ate” Rial constituted sexual harassment.

Additionally, according to the Funimation employee handbook, sexual harassment can be defined as “Verbal conduct that includes making or using derogatory comments, epithets, slurs, or jokes.” Some fans believe that these other voice actors retaining their positions despite violating Funimation’s own policies more blatantly than Mignogna in the cited incident is unabashed proof that Funimation is engaging in hypocritical practices. 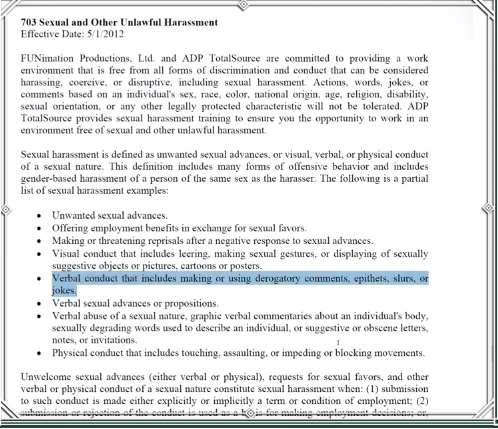 However, some fans took issue with the voice actors’ use of slurs and inappropriate language in a ‘professional’ setting, such as The Lion Guard and Teenage Mutant Ninja Turtles (2017) voice actor Yuki Matsuzaki who escalated the issue by alerting Toei Animation, the Japanese studio that produces the Dragon Ball anime, to the leaked audio clips:

Heres’s EXACTLY what I said.
The voice actors of English version of DB had recorded a parody at @funimation which consists of offensive jokes out of same-sex intercorse. It’s a HUGE problem that could end the English DB franchise
. https://t.co/RVUlua7OiA

As of writing, neither Funimation nor any of the voice actors featured in the recordings have issued a public statement regarding the leaked audio clips.