Twitch streamer KryptixEliteTv has been accused of beating and strangling his dog following the release of a now-viral video.

After the video surfaced, the streamer deleted his Twitter and Twitch accounts. You can see the video below.

It didn’t take long for the video to go viral on multiple social media platforms such as Twitter and Reddit. On the popular subreddit r/LivestreamFail, mods locked the thread due to the outpouring of extreme rage which saw calls for SWATing, doxing and threats of violence against the streamer.

In a series of alleged Tweets which were screen grabbed by @DangerousFightt, before KryptixEliteTv deleted his accounts; the streamer explained his actions stating he did not beat or choke his dog.

KryptixEliteTV states, “The dog is safe and I threw the pillow out I just hate how everyone is making it seem like I was hurting instead of helping.”

He would add, “The video isn’t the clearest to see what I pulled out her mouth. But the clip itself makes it look like it was me beating her which I wasn’t. Idk why someone put a label on it as if I was.”

He continues. “The yelling of the dog was my hand going in and out her mouth and being able to fully breathe. Imagine a hand going down your throat that fast. And after I did grab her snout to make her look at me to see if she was okay.”

He then concluded, “For the last time. The dog was choking on the inside of the pillow. Yes I did grab her up and pull some stuffing out her mouth and told her no. But after she was almost like gagging as if she was choking on some still. So I grabbed her up again and put my hand in her throat.”

Here’s a better look at the alleged tweets. 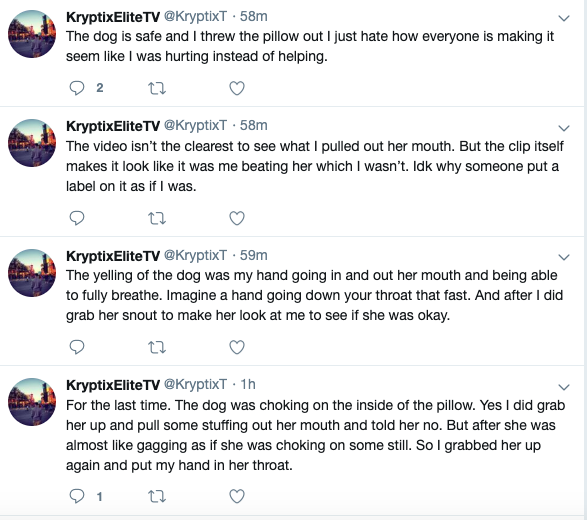 After KryptixEliteTv’s statements on the video and the well-being of the dog, his social media presence was deleted.

This isn’t the first time that alleged animal abuse has been broadcast on the Twitch platform. (Related: Twitch Streamer Alinity Accused of Animal Abuse After Tossing Cat During Livestream)

Back in July, Twitch streamer Alinity was accused of animal abuse after she picked up and tossed her cat during a live stream. This was on top of a previous stream that showed her feeding vodka to her cat.

What do you make of the video? Do you think KryptixEliteTV beat his dog? Or do you think he was helping his dog as he claims?