Feig took issue with one Twitter user’s criticism of Charlie’s Angels marketing which he claimed was “perhaps even anti-male.” The user also said that studios should market to men, and not “exclude them w/virtue-signaling.”

Related: Charle’s Angels is “Feminist Virtue-Signaling” According to Critics

& like @PaulFeig‘s #Ghostbusters, the marketing you did have was to women—perhaps even anti-male.

Want men to attend your film? Market to them, don’t exclude them w/ virtue-signaling . https://t.co/X4hlKXSY3l

Feig would respond to this in a now-deleted tweet.

“”Anti-male.” Virtue signaling.” God, you guys are boring. So, a movie starring women has an agenda. A movie starring men is just a movie. We got it.”

He would then add, “I’m sure Elizabeth is grateful for your mansplaining. Thanks for taking the time to be helpful.” 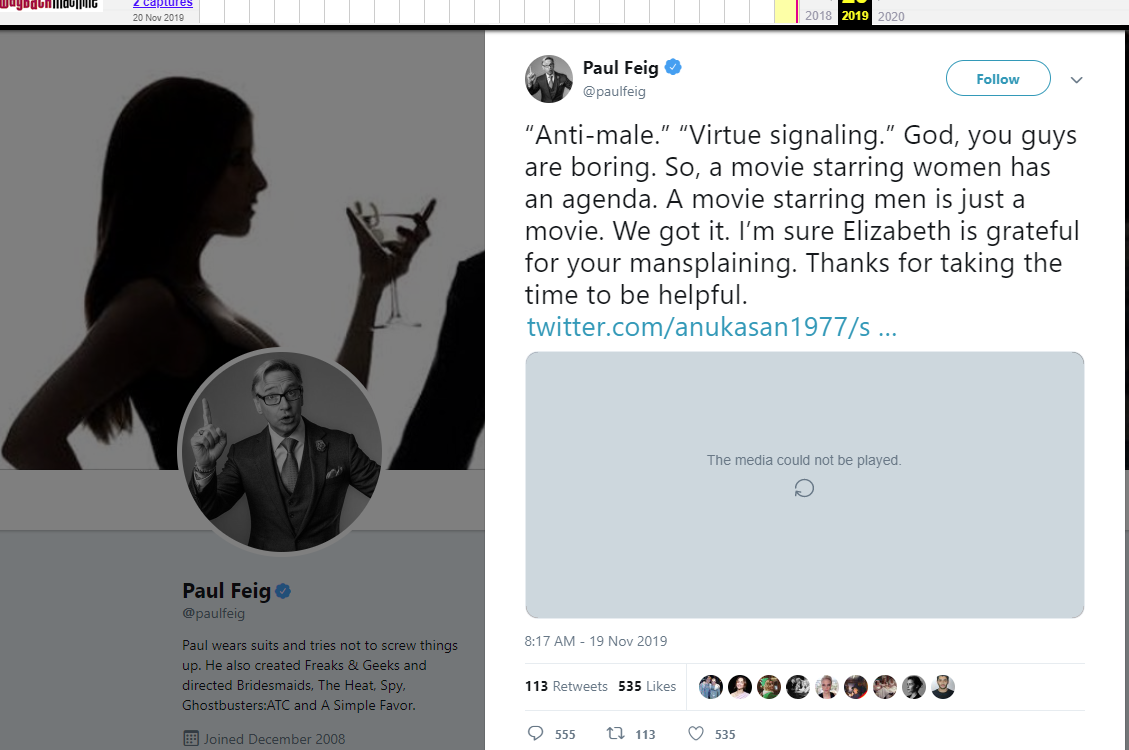 Feig notoriously defended the box office failure of his Ghostbusters film by blaming everyone but himself.

In September 2018, while speaking with The Telegraph about the film he blamed the 2016 election on the film’s box office failure saying, “I’ve been dying for somebody to look at Hillary Clinton’s campaign and us, because we were caught in the exact same vortex.”

Feig also described his critics and critics of the film as misogynistic.

He told The Hollywood Reporter, “I have been hit with some of the worst misogynistic stuff.” He added, “I used to [hear] that people had haters and I was, like, ‘How does that happen?”

As for Elizabeth Banks, she made it clear that the film was specifically targeted towards a female audience.

“When we were casting the movie, I wanted really fresh faces. I wanted a diverse cast. It’s important that women, the audience for this movie, sees themself in some part of this movie. I think that’s really important. I want the audience to feel a sense of ownership over the film, that they could be in this movie, that they could live in this world, it’s a real message. It’s a movie that I want to entertain all audiences but I did want to make something that felt important to women and especially young girls.”

And then a week before the film released she began blaming men if the film performed poorly at the box office saying, “If this movie doesn’t make money it reinforces a stereotype in Hollywood that men don’t go see women do action movies.”

“They’ll go and see a comic book movie with Wonder Woman and Captain Marvel because that’s a male genre. So even though those are movies about women, they put them in the context of feeding the larger comic book world, so it’s all about, yes, you’re watching a Wonder Woman movie but we’re setting up three other characters or we’re setting up Justice League.”

But this complaint about men’s taste in films doesn’t really make much sense especially if you’ve been watching films over the past 50 years. There are plenty of female led action films that have been wildly successful. As Derek Aitken points out some recent ones include Mad Max Fury Road, Star Wars Rogue One, and Tomb Raider.

how do they explain Kill Bill?

I don’t think the reviewers are all that sexist, either, even if the audience were.

What do you think of Paul Feig’s comments?