Gina Carano has become the latest celebrity to face the wrath of internet activists after The Mandalorian star shared a famous historical photo of a lone German citizen refusing to give the Nazi salute.

Carano came under fire after sharing the famous photo that many believe is German laborer August Landmesser refusing to give the Nazi salute to Adolf Hitler during a 1936 rally celebrating the launch of the Horst Wessel, a German sail training ship. 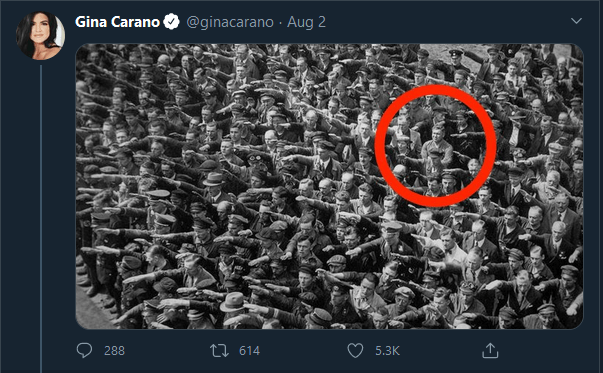 Shortly after sharing the image, ironically failing to recognize the historical context behind the photo, activists on Twitter began to criticize the actress with some demanding that she state ACAB or “All Cops Are Bastards.”

Another added, “You literally could’ve picked better picture to show whatever you wanted to show that didn’t have fricken n*azi’s on it.”

Merlinspride added, “girl u got some explainin to do cos..”

Some felt that she could have used her large platform to instead address the recent protests against police brutality, with one fan saying “Its 2020….could kept that at the crib…with your uncle’s and aunts…Nobody(even with the best intentions)wants to hear about the Nazi’s…bad timing…especially with police brutality.”

Another stated, “OMFG gina why are you like this.”

One person even went so far as to advise Carano that this was a “bad career move.”

Carano wouldn’t be silenced by those attacking her. She would share an article from Business Insider explaining the context of the photo. 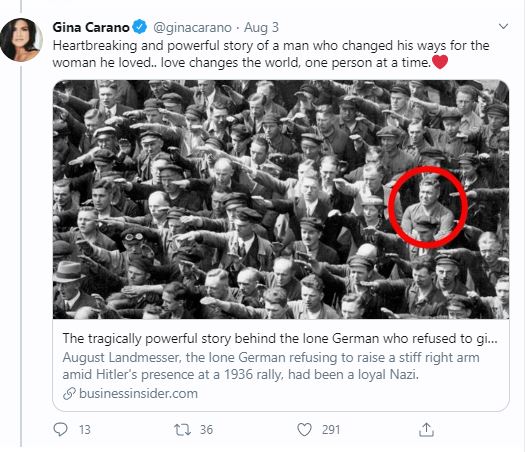 She wouldn’t stop there. The very next day the former MMA star and actress took to Twitter to call out the trolls and called them “cowards” for attempting to harass her for the simple act of sharing the photo. 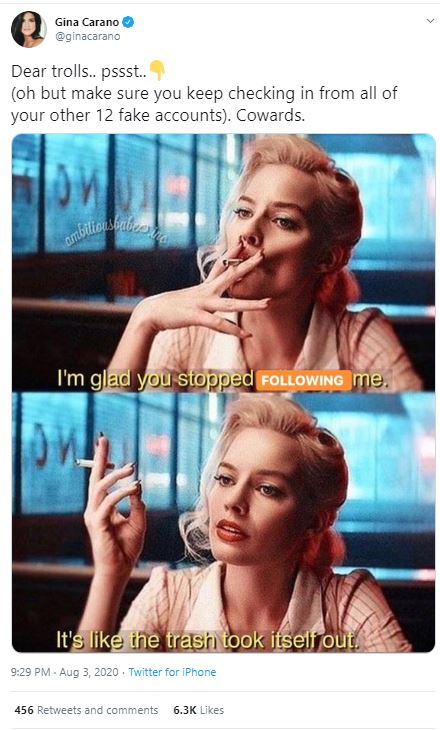 In an exchange between Carano and Twitter user @chanelkenobi, @chanelkenobi attempted to claim that the outrage mob was not trolling her, but instead “trying to educate you so you can get on the right side of history.”

However, Carano disagreed with the disingenuous framing of the criticisms leveled against her. She argued, “In my experience, screaming at someone that they are racist when they are indeed NOT a racist & any post and/or research you do will show you those exact facts.”

She added, “Then I’m sorry, these people are not ‘educators’ .. they are cowards and bullies.”

As has become exceedingly common in recent times, Carano’s critics were unsatisfied with her refusal to bow to their demands, with many proceeding to level further insults against the actress and specifically called her a racist.

Chanelkenobi responded, “No one is bullying you. You’ve shaded the blm movement, you’ve blocked people commenting it on your posts. If you’re not racist then prove us wrong because that looks pretty racist to me.” 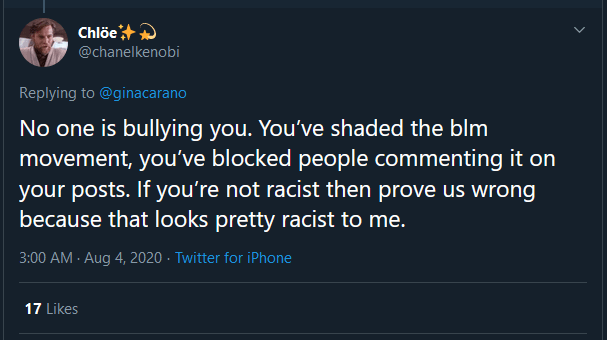 Another questioned, “so all that shit just to come to the conclusion you’re racist?” 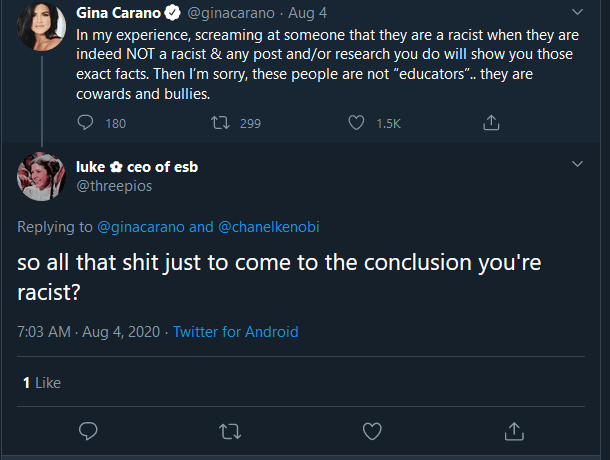 Pascaliscompte added, “Imagine being a grown woman in the public eye who’s butthurt over a bunch of minimum wage making college kids calling you on your blatantly racist and unprogressive behavior.” 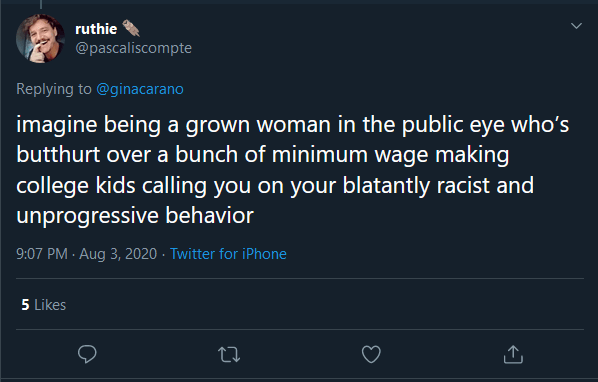 Sleepyfetts added, “…gina. if you’re not racist, then show us. support and donate to black lives matter. use your platform and voice to stand up against the police who are committing crimes against the people they are meant to protect. if 12 years olds on twitter can do this, you can too.” 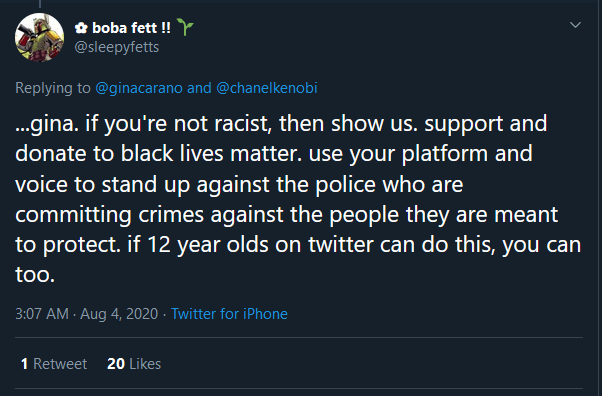 Zukoskywalker added, “you’re a racist if you completely ignore the blm movement and don’t support it. being silent puts you on the side of the racists and oppressors.” 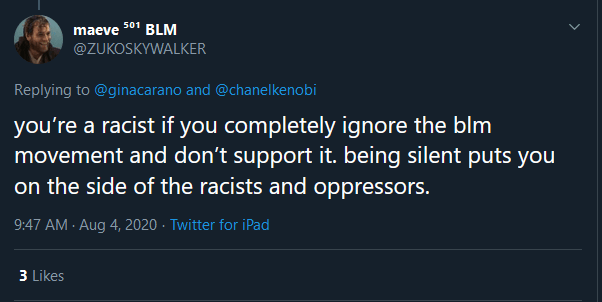 Mandobiwan stated, “it’s not enough to be ‘not racist,’ you must be ANTI racist. nobody has been screaming at you, we have been trying to tell you why some of the things you’ve posted (and not posted) have been harmful, and you block people for trying to  inform you.” 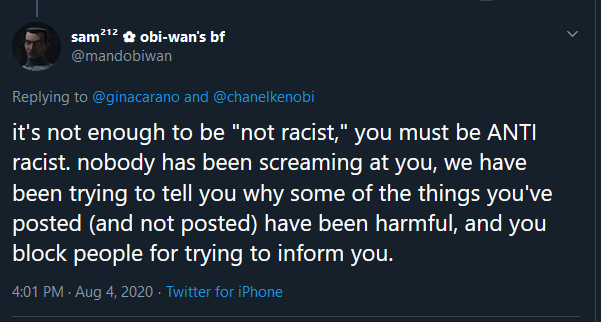 However, Carano was not without her allies and supporters, as many friends and fans rallied around the actress’ stance against bullying and cancel culture.

These supporters included MMA fighter Tyron T-Wood Woodley who enthusiastically cheered for Carano to, “say it a little louder for the people in the back!” 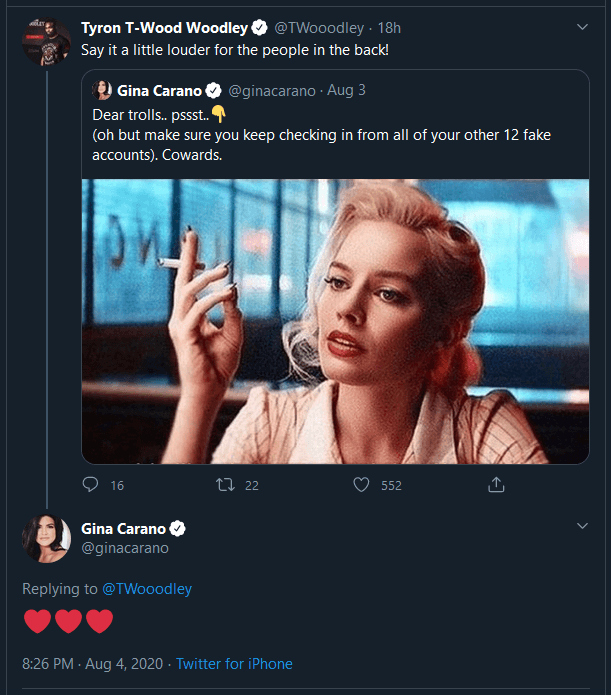 Carano would also recognize her fan support by replying to many who tweeted encouragement with words of thanks: 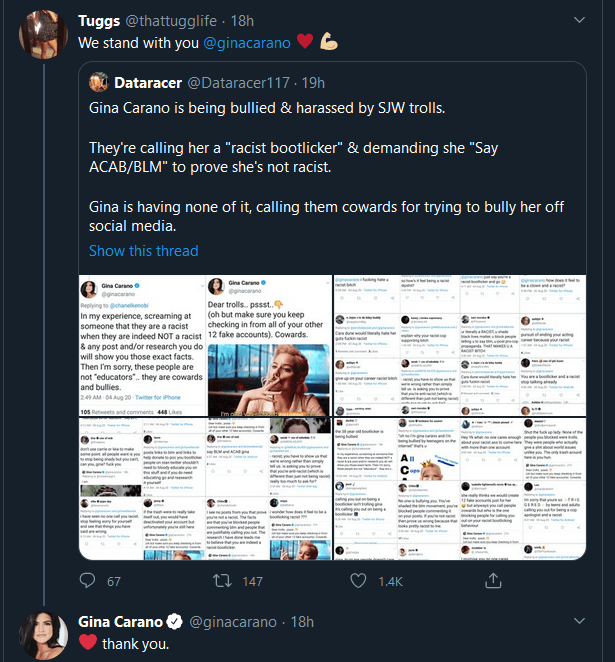 Carano would continue to stand her ground against the mob and would later share a meme that said “It had to be said” alongside a caption that read “I am now more motivated than ever to spend the time I have on earth, attracting my team, from ALL different parts of the world.. my energy goes to people who are focused on truth, love, equality & freedom. DO NOT BE AFRAID.” 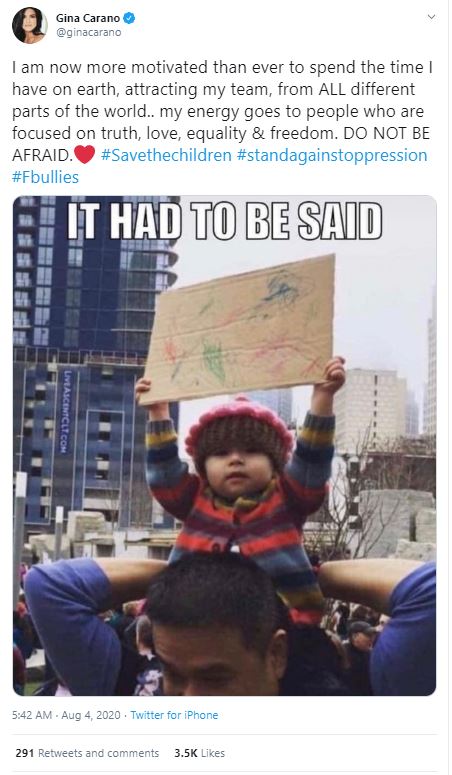 Dead Space art director Ian Milham offered his support to this sentiment by replying to her tweet with, “#TeamCarano”: 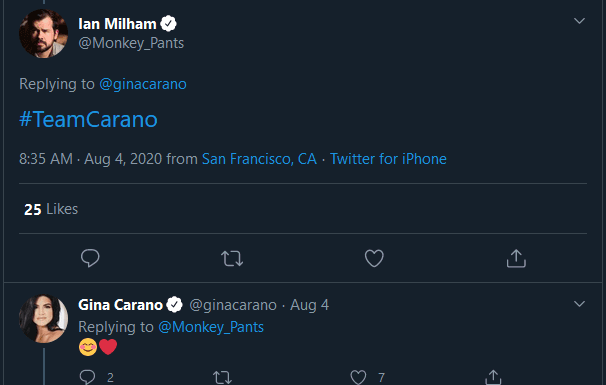 Fellow The Mandarolian actor Chris Bartlett (RA-7 Droid, Q9-0) would make his stance against cancel culture bullies by declaring that he was “Standing with my cast mate, Gina Carano. You’d #love to know & work with this human. She’s a beautiful example of humility & kindness to everyone”:

Carano would reply,  “ahh Chris..thank you, big hug from here my friend”: 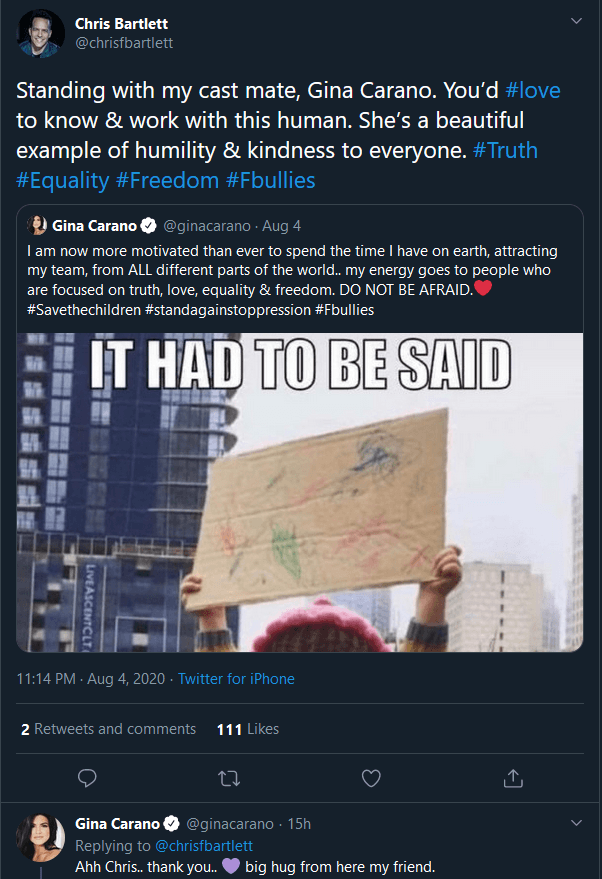 Despite the outpouring of troll attacks against her, Carano refused to step away from the public sphere.

On August 5th, amidst the continued attacks against her, Carano would share a positive message with her followers and supporters, saying “My heart is filled with so much warmth from all of you..Just when you think the darkness starts closing in, all of you lit a candle to light my way. It really is incredible the people standing with each other, heart to heart. Believe there is hope,”

Even with such a positive message, the publicly visible replies attached to the tweet were still used as an opportunity for another user to attack Carano by stating, “imagine being racist.” 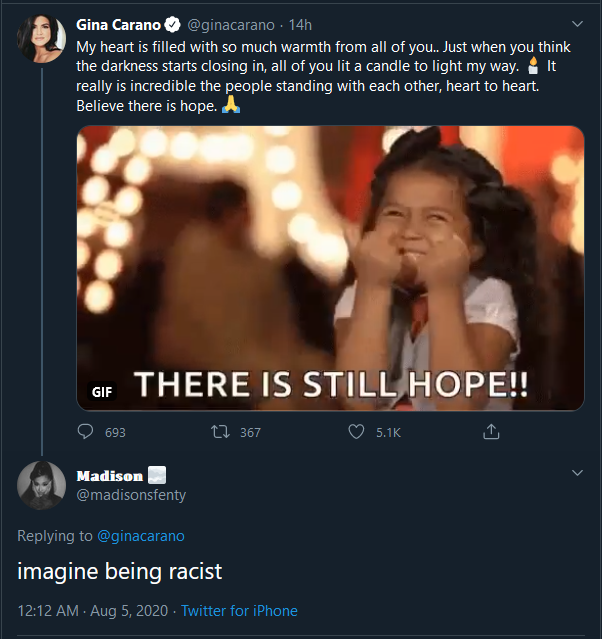 Finally, Carano would share a quote from Braveheart, which reads, “Aye, fight and you may die. Run, and you’ll live…at least a while. And dying in your beds, many years from now, would you be willing to trade all the days, from this day to that, for one chance, just one chance, to come back here and tell our enemies that they may take our lives, but they’ll never take…OUR FREEDOM?!” 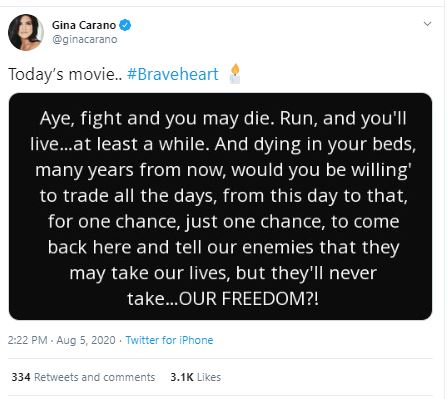