Star Wars and Lucasfilm confirmed that Force Lightning is a Dark Side power in the recently published The Star Wars Book.

A screenshot from the book posted to Twitter by user @OldManBlinks confirms Lucasfilm and Star Wars still believe this is a Dark Side power despite Rey using the ability in Star Wars: The Rise of Skywalker.

In a section titled “Unlimited Power: The Sith Order” a brief overview of the Sith are given.

It begins, “The Sith are an order founded by a splinter group of Jedi who discover the raw power that can be achieved by devotion to the dark side.”

The book then reveals that force lightning is exclusive to dark side users, “The Sith’s focus on the dark opens up powers that a Jedi dare not wield, such as the ability to corrupt the Force through focused rage to launching deadly lightning from their fingertips.”

Here’s a better look at the page. 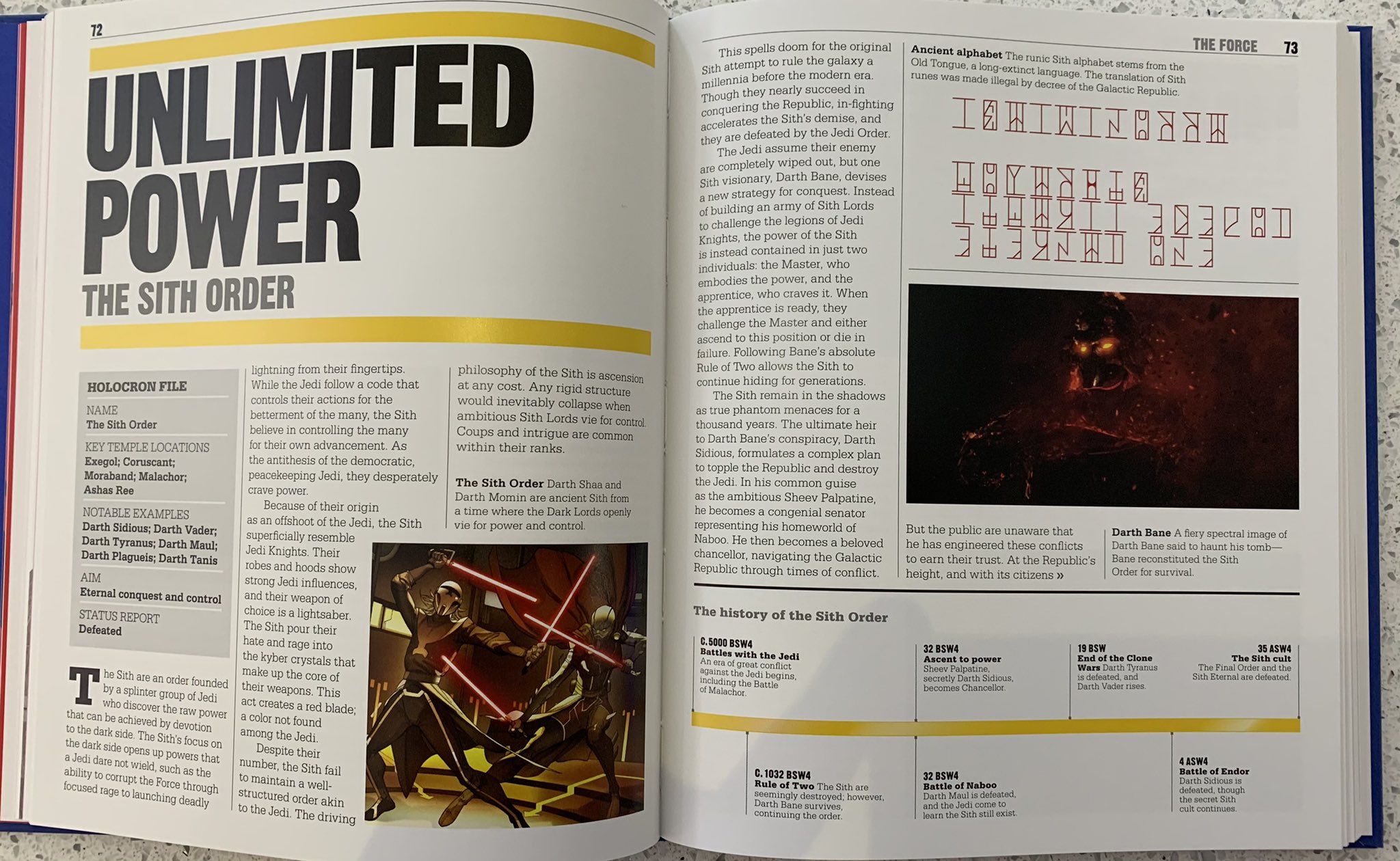 The book confirms StarWars.com’s Databank entry on Force Lightning that also states the ability is specifically a “dark side ability.”

The databank entry reads, “Force lightning is a dark side ability used to torture, disfigure, and even kill one’s victims. Blue in color, Sith shoot Force lightning from their hands by calling on their hatred and aggressive feelings.”

“However, while a deadly weapon, it is not unstoppable. Force lightning can be deflected and absorbed by a lightsaber, and select Jedi have proved able to neutralize the technique through the power of the light side,” it adds.

With this confirmation, it still leaves Rey’s use of the ability in The Rise of Skywalker unexplained.

Rey, who has not trained whatsoever in the Dark Side of the Force, uses the ability when she is attempting to stop a First Order ship from leaving the surface of Pasaana. Rey begins by using the Force to halt the ship’s movement, essentially suspending it in the atmosphere.

However, Kylo Ren challenges her and begins using the Force to try and keep the ship moving. Anger is eventually shown on Rey’s force and then Force lightning erupts from her fingers destroying the ship that she believes Chewbacca is on.

After blowing up the ship, Rey goes into a state of shock and appears confused as to how she manifested the power. In fact, she even looks down at her hand, in what appears to be an attempt to make sense of what just happened.

No official explanation has been given for Rey’s use of Force Lightning. However, there are theories that because she let herself succumb to her rage and anger the ability manifested without any training.

Another theory claims her bloodline could have something to do with it, given it is revealed she is the daughter of a cloned version of Darth Sidious. However, this theory doesn’t make any sense given what we know of the Force and the fact that individuals are able to choose between the Dark Side and the Light Side.

This is specifically seen in The Return of the Jedi, when Luke Skywalker realizes he is beginning to delve into the Dark Side. Instead of continuing to embrace the Dark Side of the Force, Luke rejects it. He throws his lightsaber to the ground and declares he would rather die than join the Dark Side.

Luke tells Sidious, “I’ll never turn to the Dark Side. You failed your highness. I am a Jedi like my father before me.”

This choice is also seen in The Revenge of the Sith when Anakin Skywalker chooses to embrace the Dark Side.

When Sidious tells Anakin to become his apprentice and learn to use the Dark Side of the Force, Anakin responds, “I will do whatever you ask.” He then states, “Just help me save Padme’s life. I can’t live without her.”

“I pledge myself to your teachings,” Anakin later added. He is then knighted Darth Vader by Sidious.

If it had something to do with her bloodline, Luke would have been randomly manifesting all kinds of Force powers that his father had previously learned. He wouldn’t have had to train like he did under both Obi-wan Kenobi and later Yoda.

Along with this confirmation that it is a Dark Side power, it also calls into question why Yoda seemingly used a version of the ability as a Force Ghost when he destroyed the Jedi Temple on Ahch-To.

Nevertheless, this confirmation is just another knock against The Rise of Skywalker and the film’s complete lack of understanding regarding the world of Star Wars and more specifically how the Force works.

What do you make of this confirmation? Is this more proof the people at Lucasfilm had no idea what they were doing when they created The Rise of Skywalker?