The Suicide Squad and The Guardians of the Galaxy director James Gunn questioned if Mike Pence can be sued after he revealed that members of the U.S. Space Force will be called Guardians.

In a speech at the Eisenhower Executive Office Building commemorating the first anniversary of the Space Force, Vice President Mike Pence announced that the military branch will call its members Guardians. 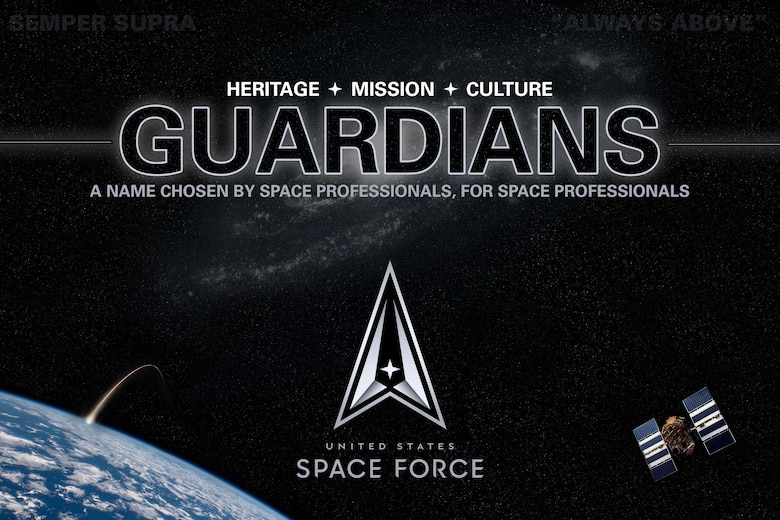 Pence states, “As I mentioned, we just returned from the Oval Office. And so it is my honor, on behalf of the President of the United States, to announce that, henceforth, the men and women of the United States Space Force will be known as ‘Guardians.'”

He added, “Soldiers, sailors, airmen, Marines, and Guardians will be defending our nation for generations to come.”

Following this announcement, James Gunn took to Twitter where he asked, “Can we sue this dork?” 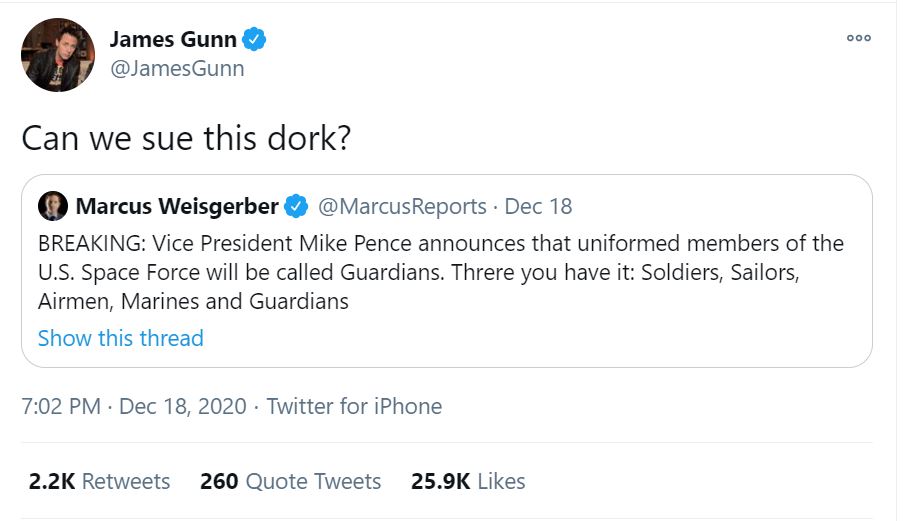 Gunn’s question comes after multiple celebrities including Lucifer showrunner Joe Henderson and The Orville writer David Goodman called on Paramount and Star Trek to sue the United States government over their Space Force logo back in January.

Goodman tweeted, “I think Paramount is going to sue.” 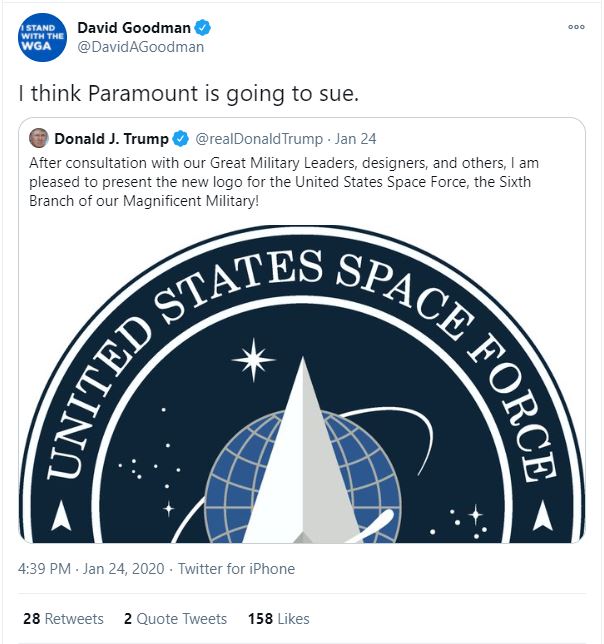 Henderson would respond to Goodman writing, “God I hope they do.”

Star Trek veteran George Takei even got in on the action writing, “Ahem. We are expecting some royalties from this…” 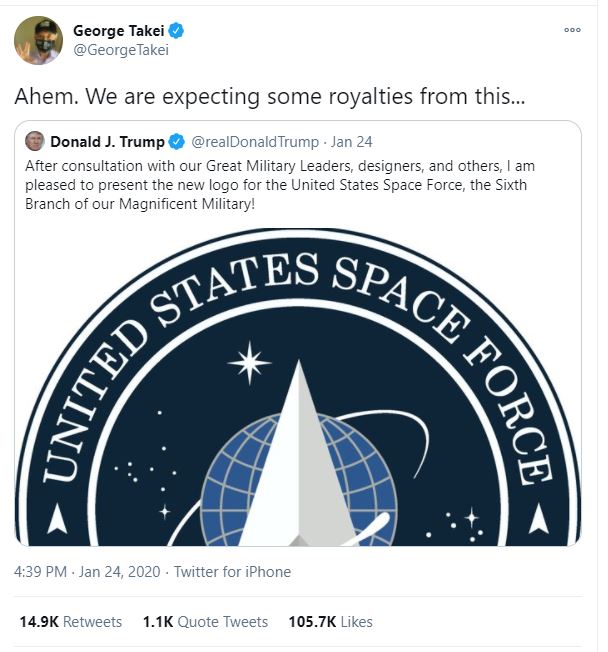 He would later add, “I feel like Melania must have had a hand in copyin–I mean, designing this.”

Gunn would eventually receive quite a bit of pushback on his question. In response, he would claim his original tweet was just a joke.

In response to RadioDystopia he wrote, “I was making a joke. But, for the record, the Guardians of the Galaxy have been around since 1969.” 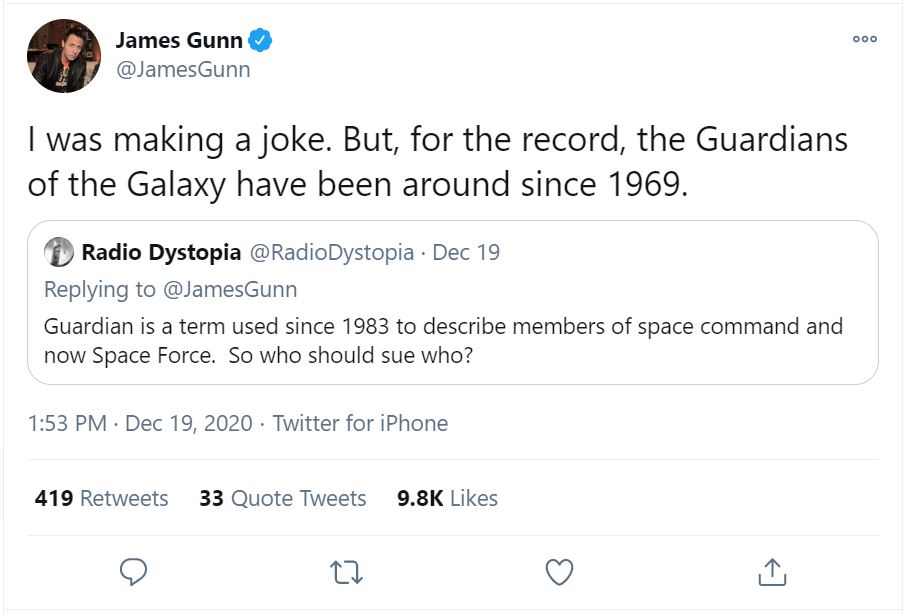 He would again describe his initial tweet as a joke in response to GilesIII.

Gunn wrote, “Again, it was a joke. Again, Guardians of the Galaxy first appeared in 1969. Again, the Space Force member who came up with the name is a fan, seems like a cool guy, and I wish them all the best.” 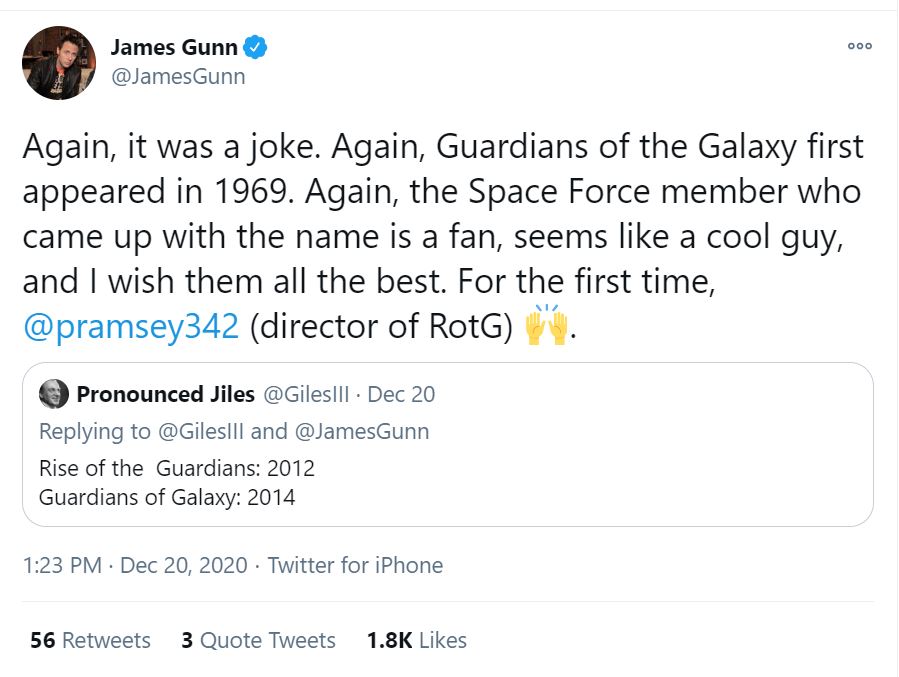 The official Space Force website detailed “Guardians is a name with a long history in space operations, tracing back to the original command motto of Air Force Space Command in 1983, “Guardians of the High Frontier.”

They added, “The name Guardians connects our proud heritage and culture to the important mission we execute 24/7, protecting the people and interest of the U.S. and its allies.”

What do you make of Gunn’s initial tweet? Do you think he was joking?