Justified actor Nick Searcy showed no mercy to comedian and Disney actor Sarah Silverman after she recently declared on her podcast that she no longer wanted to be associated with the Democrat Party anymore.

At around the 30:40 mark of her podcast published on March 4, 2021, Silverman is asked about why she retweeted a lawyer defending the detention centers that President Joe Biden and his administration are using at the border.

During her response to the question, Silverman reveals she deleted the tweet 10 minutes after she posted.

“I made a tweet mistake and corrected it 10 minutes later, but then you people go, ‘Oh why did you delete it?’ Yeah, I’m going to delete it,” she continued. 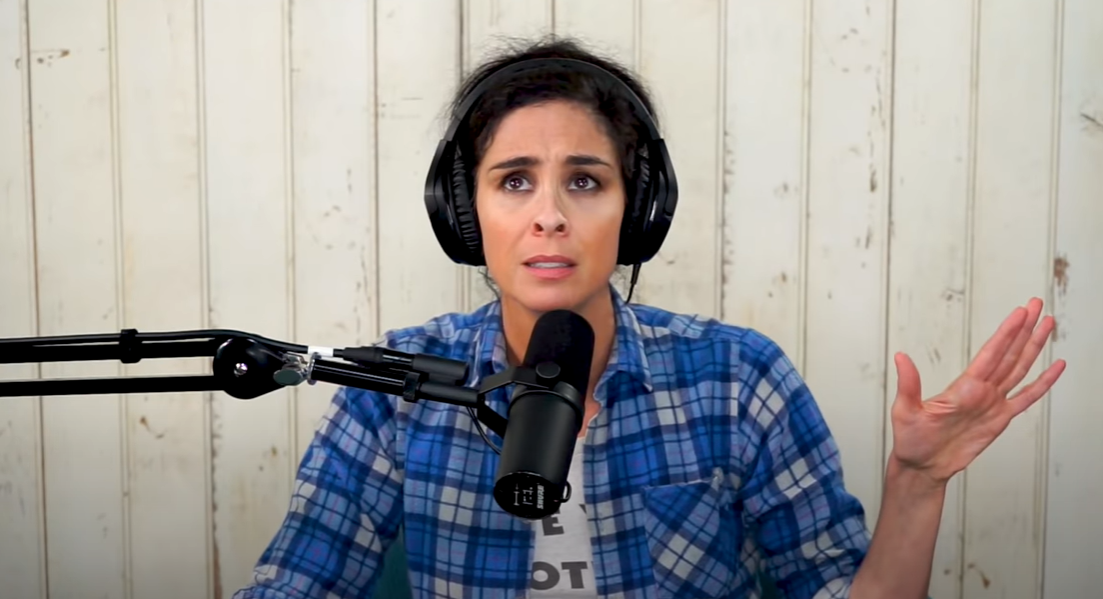 She then declares she’s “passionately against separating children at the border,” explaining, “it causes me great soreness.” 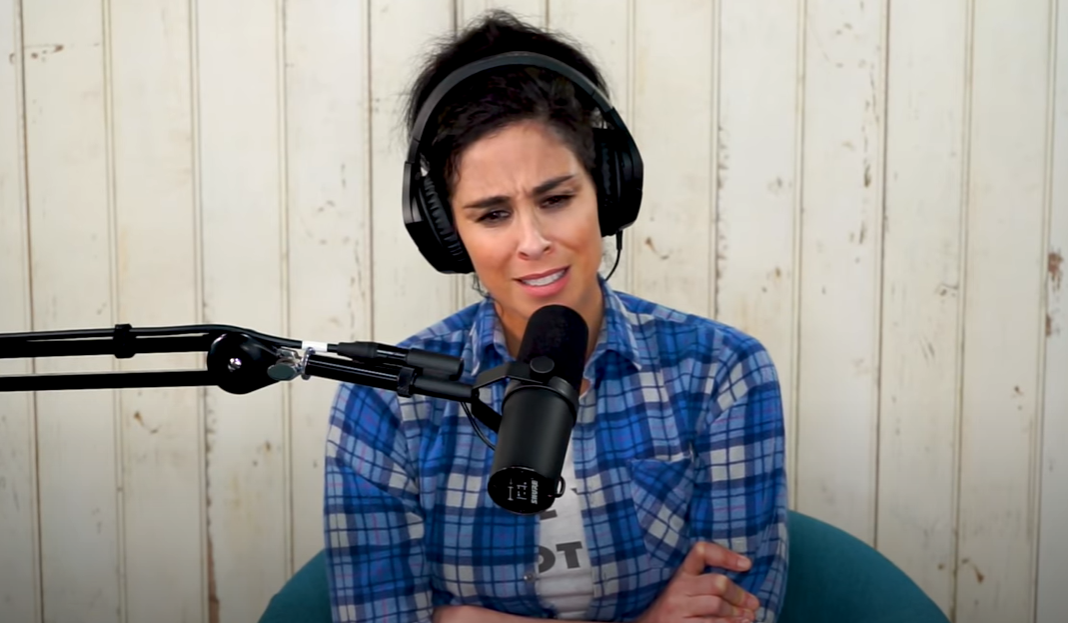 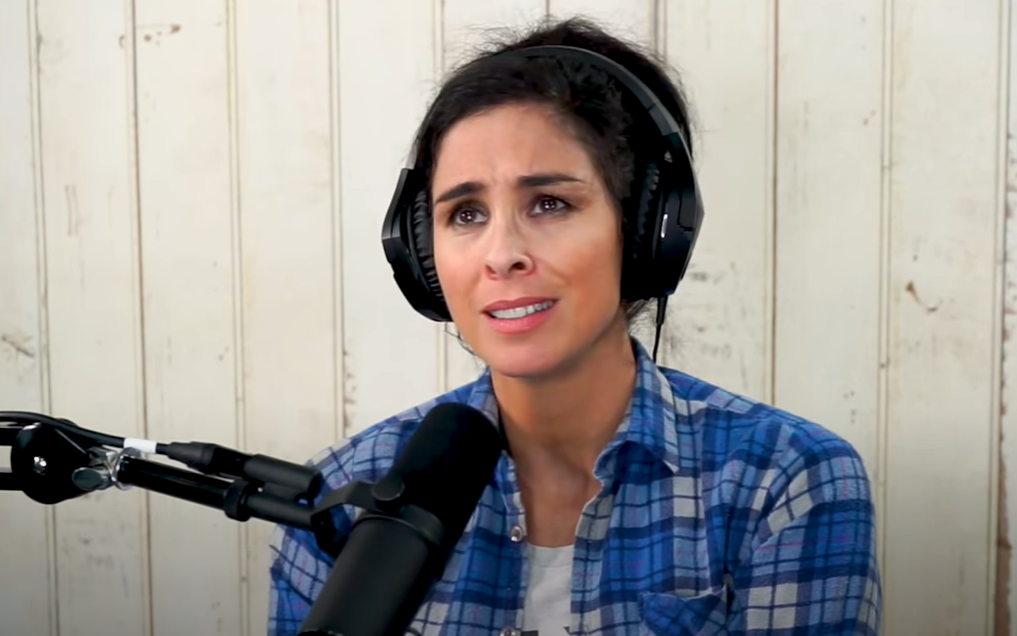 She elaborates, “It just comes with too much baggage. Every party. It comes with so much f***ing baggage. That no ideas can be taken at face value. And without ideas what are we? Without a common truth how can we talk about it?”

Finally, she concludes, “You know, Republicans might hear an idea that they would totally agree with, but if it comes from AOC, then they hate it. And of course, to be honest, when I hear an idea that comes from a Republican it’s suspect to me. We all put too much shit on this stuff. We are no longer able to be a nation of ideas because of parties and all that it means.

Searcy would respond to the Silverman’s comments shared to Twitter by Bridget Phetasy writing, “It’s too late, Sarah Silverman. You backed the people that destroyed free speech and we are no longer a nation of ideas. We are a nation of totalitarian power, and you voted for that.” 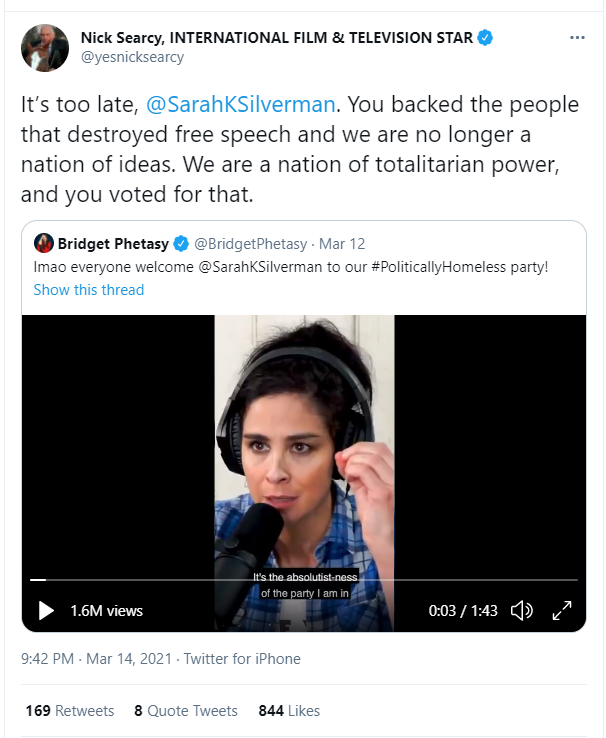 As recently as February, Silverman called for the defunding of police and described the institution of the police as “a racist born program.”

She wrote on Twitter, “Knowing that the Rambo/John Wick level rage I feel is nothing compared…. THIS IS WHY WE HAVE TO DEFUND THE POLICE, reallocate those funds to social programs, then take what was once a racist born program and build it back better, built to SERVE & PROTECT ALL.” 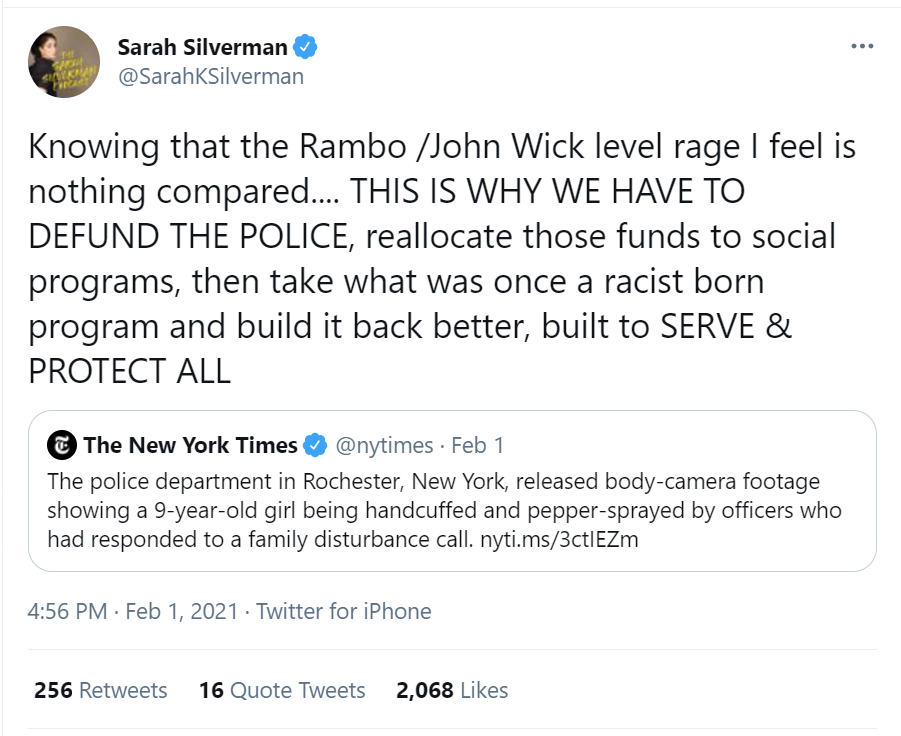 Back in May 2020, Silverman tweeted, “Republican politicians do nothing but push an authoritarian racist agenda. And I don’t see establishment dems doing much, It’s why I became a democratic socialist. Bernie, AOC, Julia Salazar, and so many new exciting candidates straight from the front lines – teacher, nurses, organizers, fair housing advocates, all supported by a real people’s movement and not billionaire blood money- are my only true feeling of real hope.” 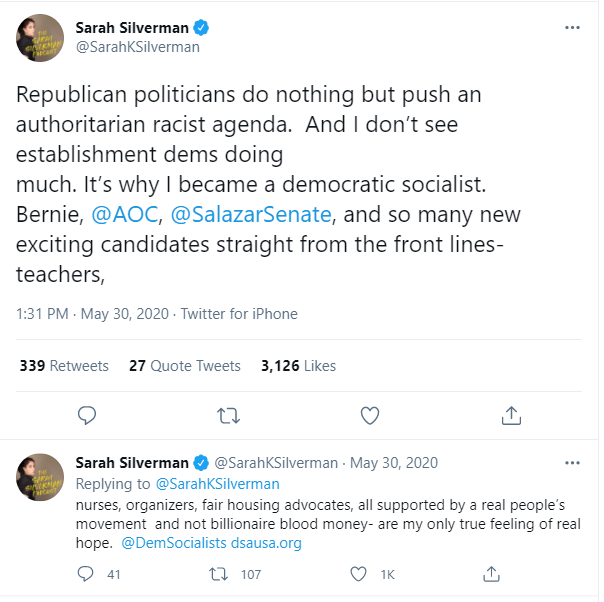 In 2019, she described Vice President Mike Pence as “hate mongering, fear based weasel.”

She tweeted, “Dear VP you are a hate mongering, fear based weasel & your biggest irony is that if there was hell, you’d 100% be going there. I hope you go 2 prison 4 crimes against humanity re: the lgbt community, women’s rights & the babies u rip from the arms of parents seeking our help.” 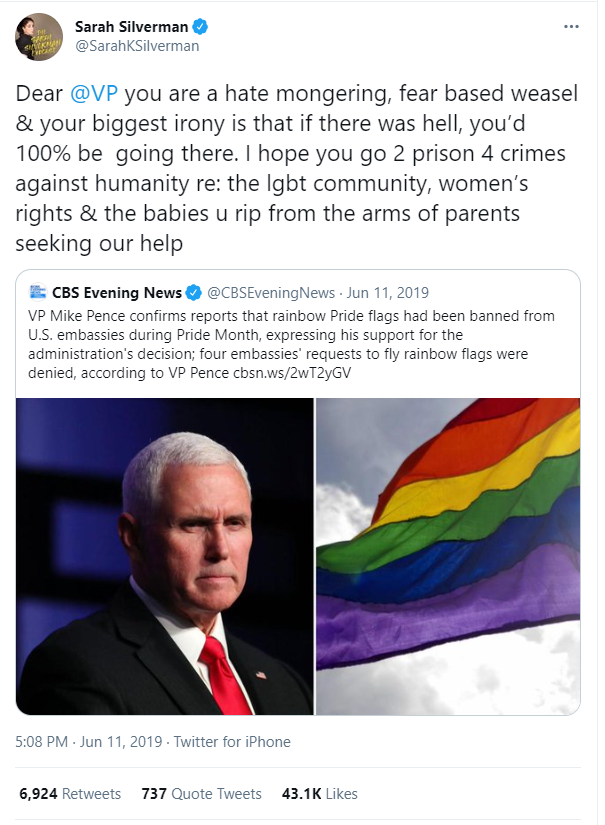 In 2018, she went after white women during an episode of her Hulu series, I Love You America.

She stated, “God, I wish I could get to the 52 percent of white women who put Trump in office, but they’re too far gone, so instead I am looking to young people.”

Earlier in 2018, she wished that President Donald Trump would “be held down against [his] will and violated.”

She tweeted, “I hope you someday understand what it is to be held down against your will and violated. Your compassion is startless.” 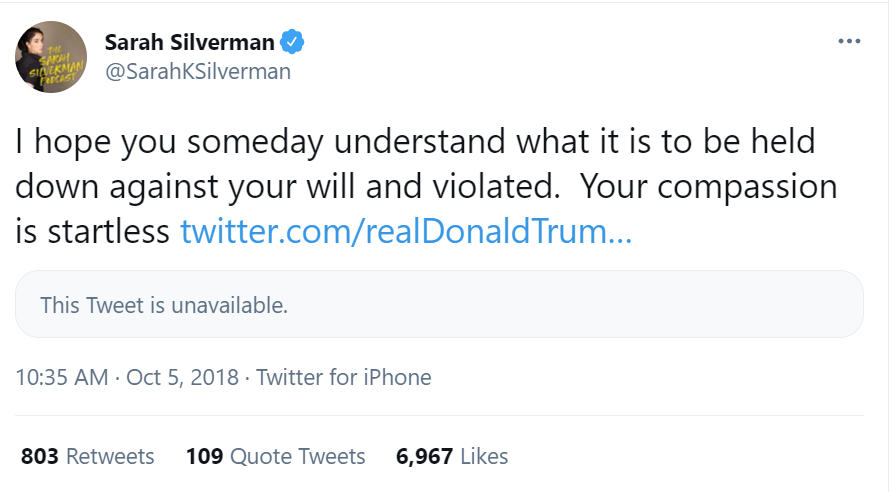 Silverman voices Vanellope in Disney’s Wreck-It Ralph franchise and most recently voiced the character in 2018’s Ralph Breaks the Internet.

CNN reports that the communists began detaining Uyghurs as early as January 2017. They state, “Few dates are included on the leaked document, but the earliest date of detention listed is in January 2017.”

What do you make of Searcy’s response to Silverman? Do you think Silverman actually believes what she’s saying or is she just trying to get herself out of the sights of the woke mob that she actively participates in?