Dune actor Dave Bautista recently attacked Rep. Dan Crenshaw (R-TX) over the latter’s criticism of Olympic hammer thrower Gwen Berry, who made headlines this past weekend after turning away from the American flag during a recent performance of the United States’ national anthem. 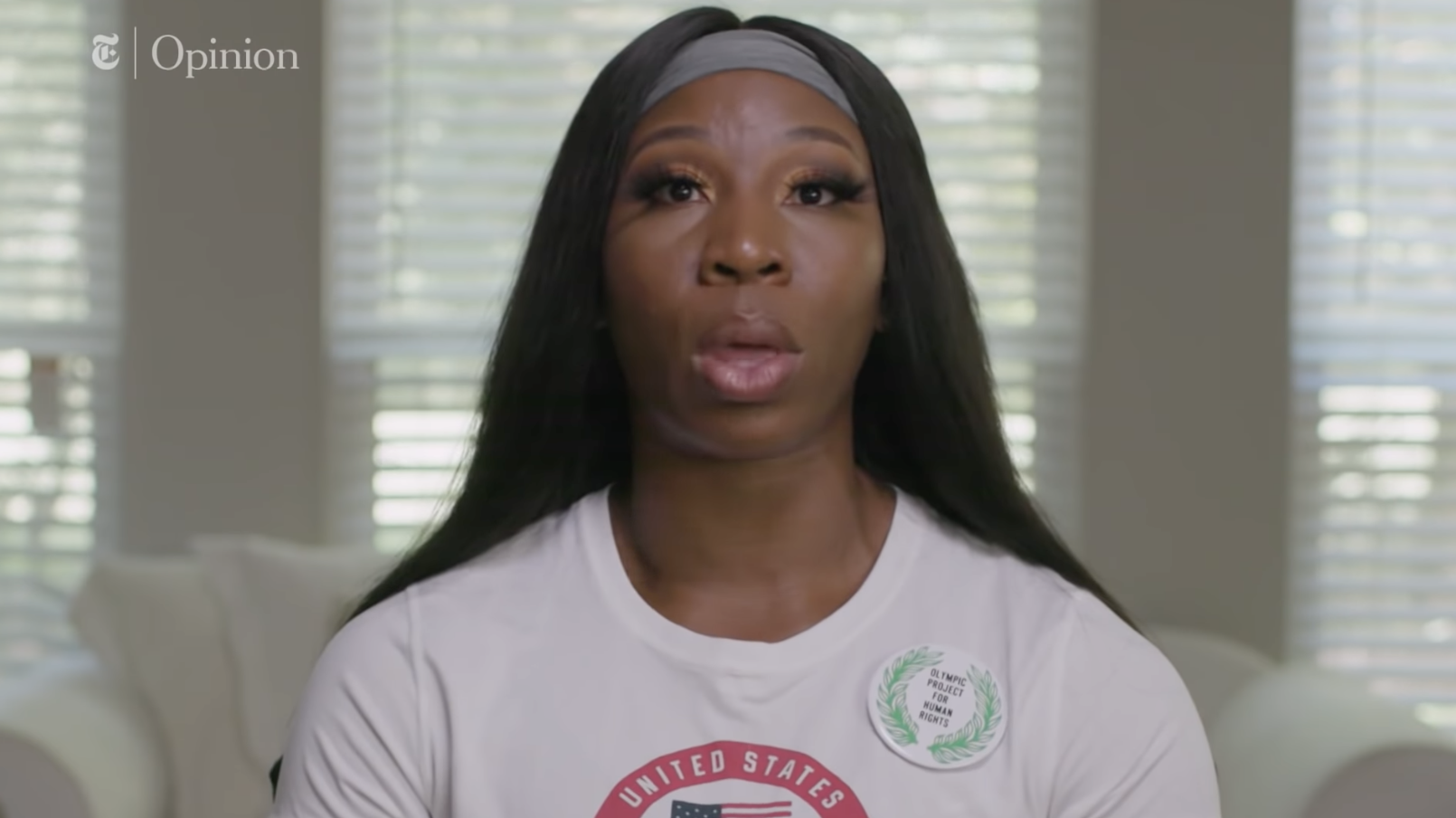 Before we begin, however, it is imperative that we provide additional context on Berry’s actions at the recent US Olympic track and field trials.

After receiving the bronze medal in the hammer throw competition, Berry and two of her competitors took to the traditional podium to receive their awards. However, as the national anthem began to play across the stadium, the Olympic athlete turned her back on the flag and held up a T-shirt that had the words “Activist Athlete” written on it, proceeding to drape it over her head.

“I feel like it was a set-up, and they did it on purpose,” Berry said of the timing of the national anthem’s start, which began while she was standing on the podium after having received her medal. “I was pissed, to be honest.”

Berry would later share a photo, taken during the medal ceremony, of herself turning away to her personal Twitter account alongside the caption, “Stop playing with me.” 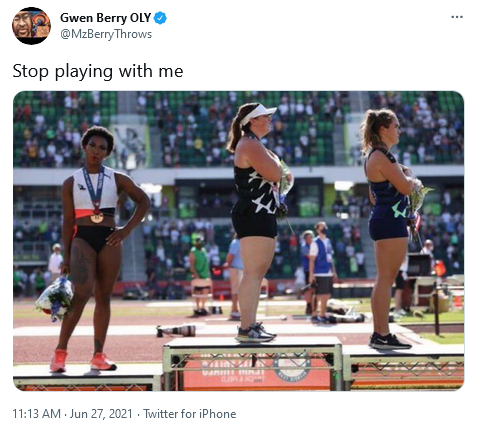 Upon receiving word of Berry’s moment, Rep. Dan Crenshaw found that he was not impressed with the athlete’s disrespectful behavior, asserting that the point of the Olympic team is to actually have people in it that wants to represent the country, not to engage in activism.

“We don’t need any more activist athletes. She should be removed from the team,” Crenshaw asserted during a recent interview with Fox News. “The entire point of the Olympic team is to represent the United States of America. It’s the entire point. 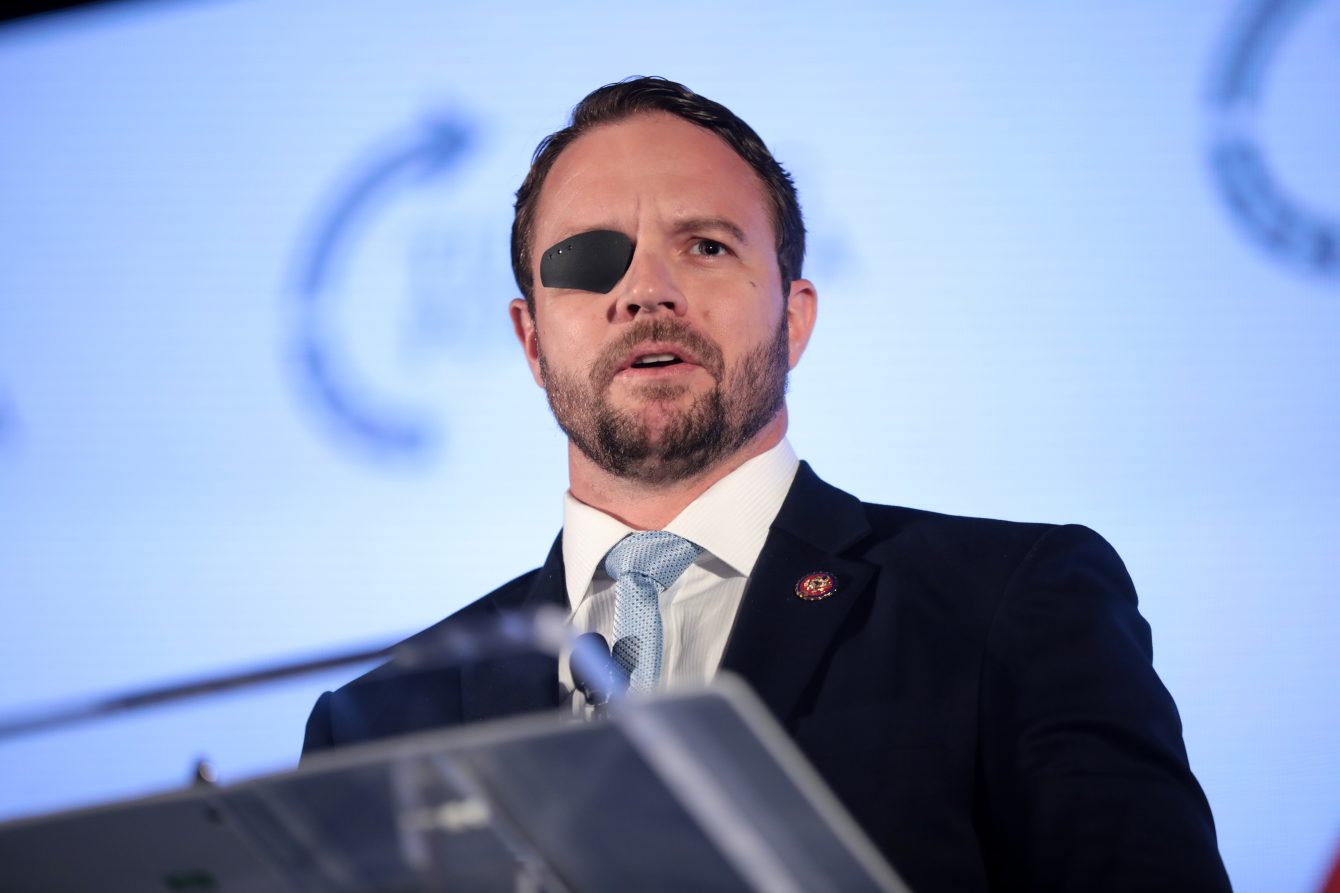 Crenshaw then compared NBA players who have been taking the knee in support for movements like Black Lives Matter with turning away from the American flag, further noting that the latter “is on a completely different level of disrespect.”

“It’s one thing when these NBA players do it. Ok, fine. We’ll just stop watching, but now the Olympic team?” Crenshaw asked. “And it’s multiple cases of this. They should be removed. That should be the bare minimum requirement, is that you believe in the country you’re representing.”

Dan Crenshaw calls for Gwen Berry to be removed from the Olympic team because she turned away from the flag pic.twitter.com/c2xWKLXPPJ

Following Crewnshaw’s television appearance, Berry would retweet the above clip of his interview and write “At this point, y’all are obsessed with me” – proving, in the process, that she has no sense of self-awareness

(Perhaps people wouldn’t be ‘obsessing’ over what she did if she hadn’t disrespected the national anthem or the flag in the way that she did – after all, how else can one read the casually carrying of a t-shirt blatantly promotes one’s own activism as anything other than an attention-seeking manoeuvre?) 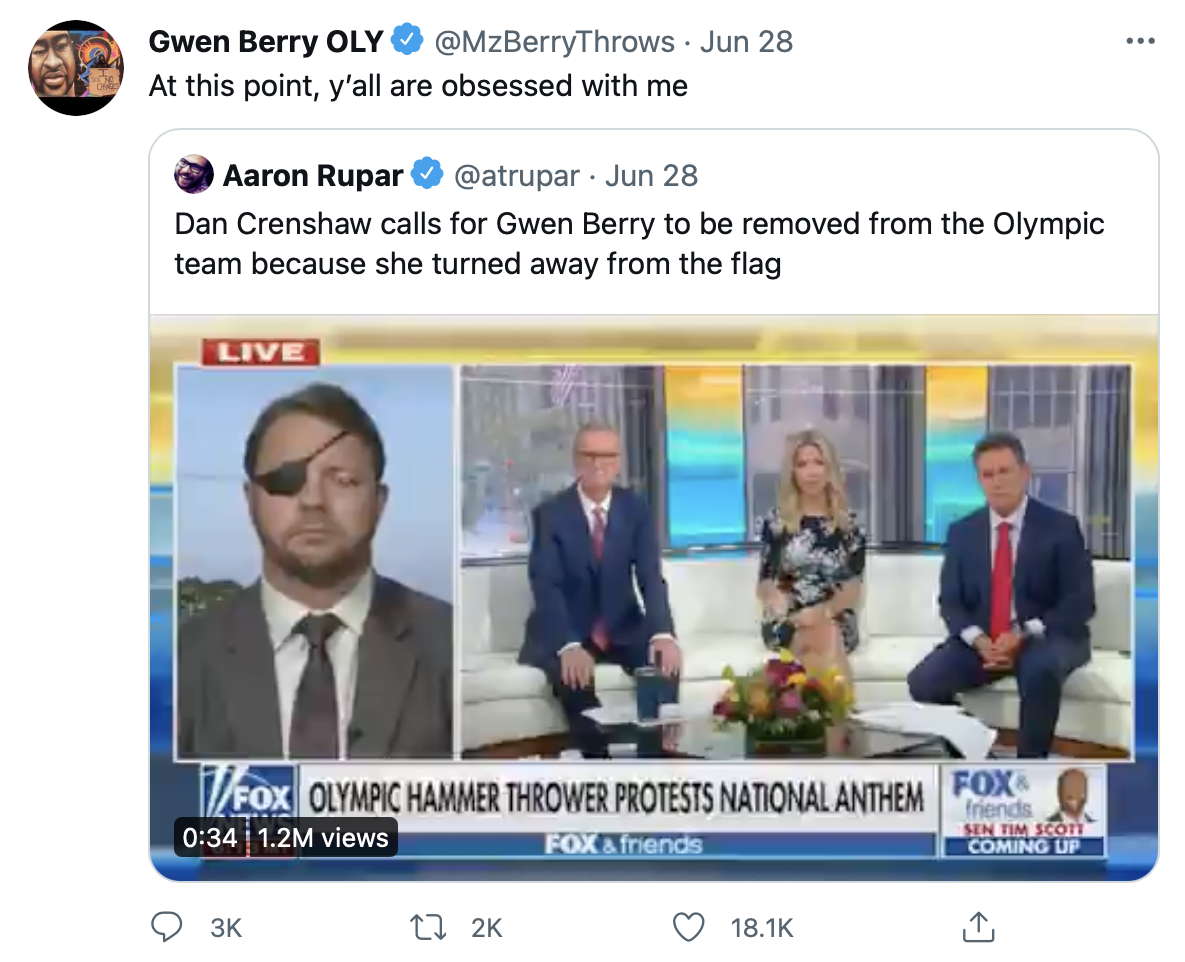 In response to Rep. Crenshaw’s comments, ex-Navy JAG and former Democratic candidate for the Florida’s 18th Congressional District Pam Keith took to Twitter to lecture the former United States Navy Seal, even going so far as to justify Berry’s actions and promote the athlete’s blatant display of activism.

She continued, “I would like to respectfully ask you to… SIT ALL THE WAY DOWN AND SHUT THE &}~%]<}£{[> UP!” before offering up her own definition of what constitutes a “real” patriot in order to claim that Crenshaw and Republicans writ large, worship white supremacy. 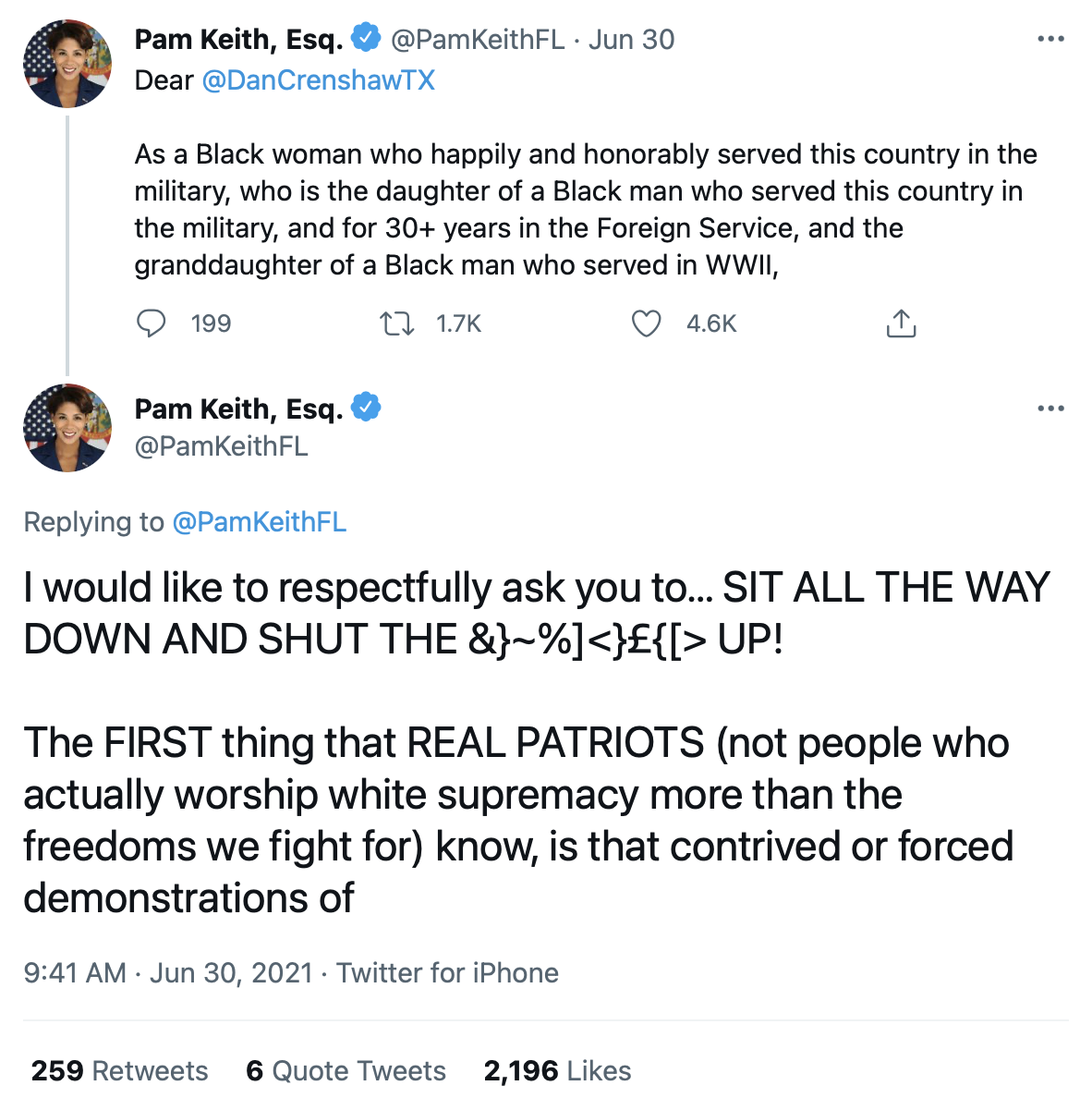 Elaborating even further, Keith explained that “REAL PATRIOTS know that the flag is a symbol of MANY things,” adding that, “some amazing, some just good, and some not good at all.”

Keith then proceeded to continue slamming Crenshaw’s views and undermining his opinion, simply because he supported former President Donald Trump.

“Nobody died and made YOU king of anything,” she continued. “And as someone who openly and notoriously worshiped at the foot of a wanna-be king, you are the LAST person to lecture others on the meaning of the flag,” Pam Keith fervently expressed, before further claiming that “racist a**hats” tried to overthrow the presidential election because they didn’t like the outcome. 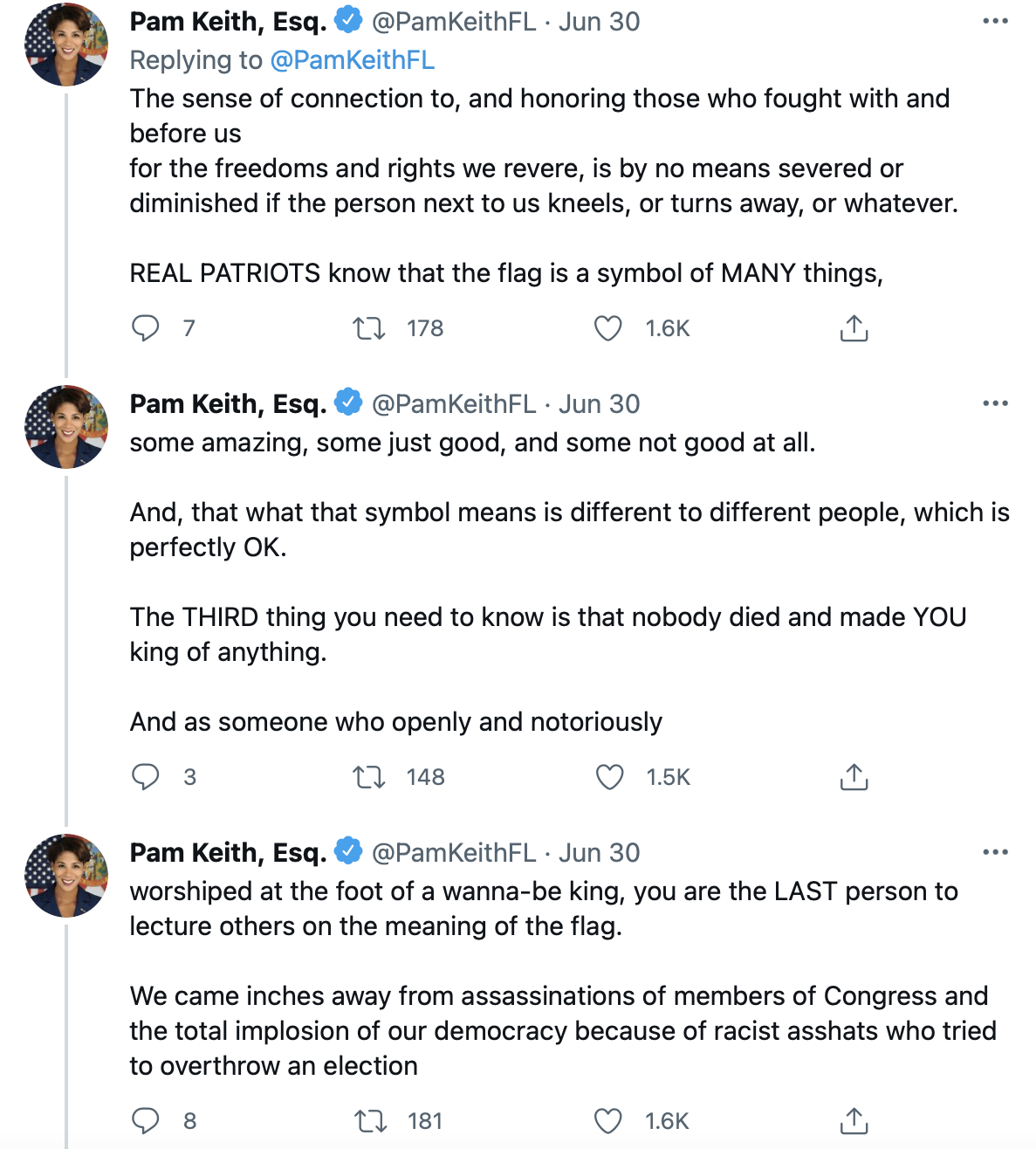 “You have no idea what Gwen Berry has gone through or what makes her feel as she does, and even less desire to learn about it,” Keith’s lecture continued.

For good measure, just in case her point home wasn’t being driven properly, Keith then decided to play both the race and gender card in one hand, adding, “But what you did was attack a black woman & unleash the well-known phony right-wing hyena hysteria pack attack at her, on what ought to have been one of the happiest and best moments of her life. ” 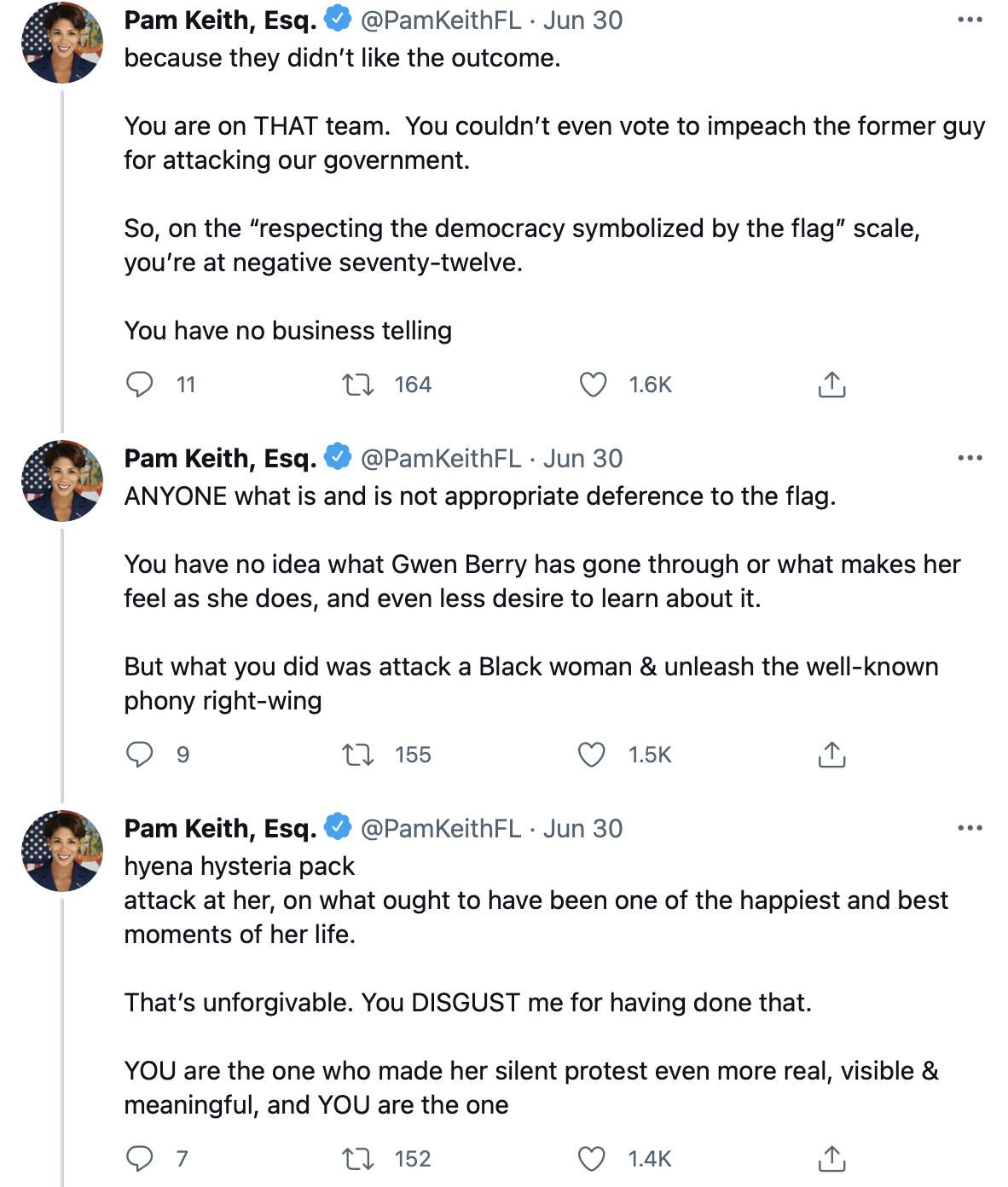 Is the point she’s trying to make clear yet? Don’t worry, she’s still got more hate to dish out against the Republican Party (GOP) andRep. Crenshaw specifically — who she’s already beginning to refer to as a white man.

Admitting that her fairly biased opinion is driven by feelings and not facts, Keith added, “I have a feeling that is precisely what you were going for, since it is GOP 101A to publicly attack Black women to launch culture wars. So I totally get why it was good politics for you to attack Gwen. That’s how y’all roll.” 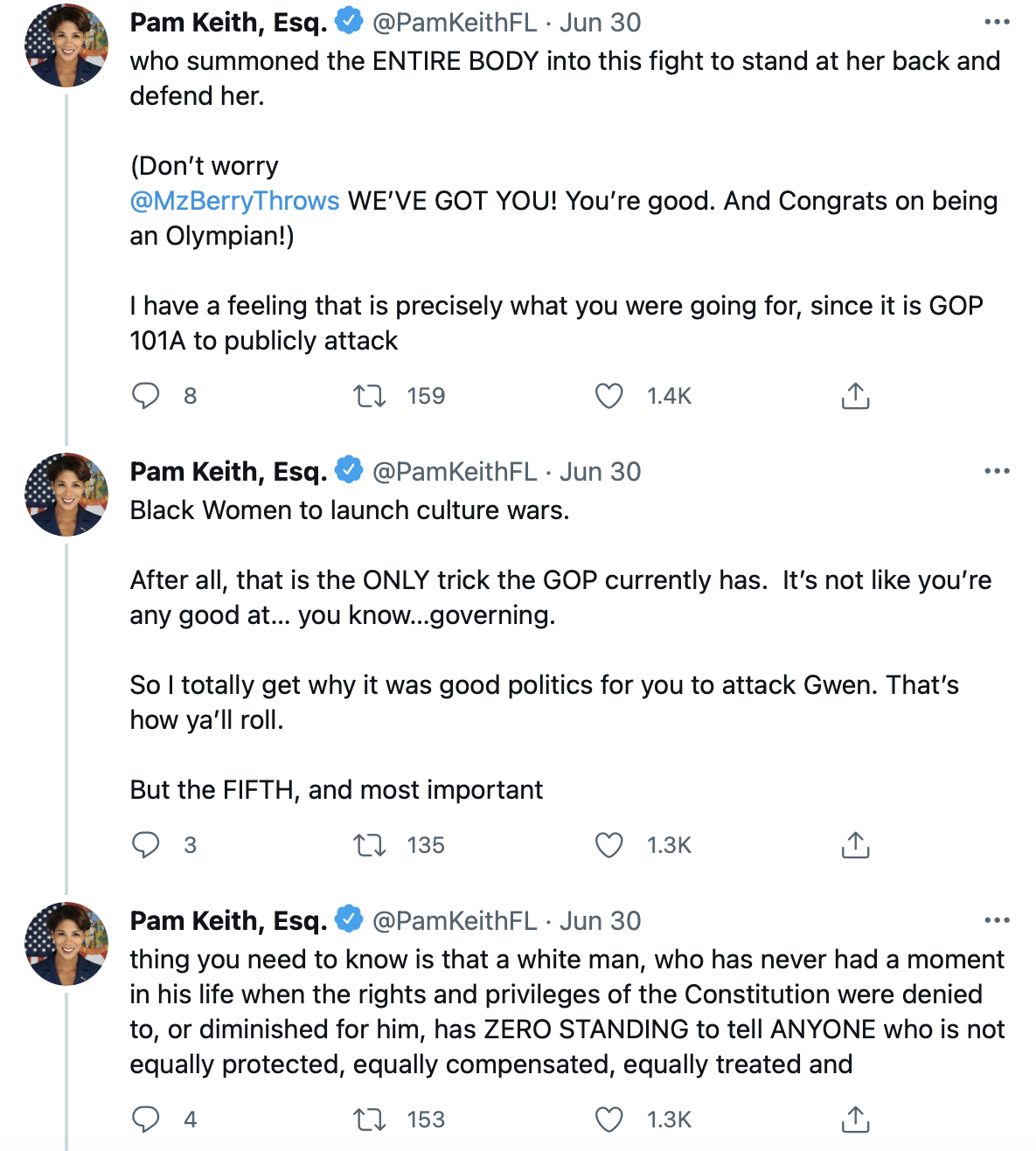 “But the FIFTH, and most important thing you need to know is that a white man, who has never had a moment in his life when the rights and privileges of the Constitution were denied to, or diminished for him, has ZERO UNDERSTANDING to tell ANYONE who is not equally protected, equally compensated, equally treated, and equally valued by the systems in this country, what to venerate, how and when,” she continued.

Interestingly enough — albeit extremely predictably — in that last tweet, Keith  made an assumption about Crenshaw, claiming that he’s been privileged his entire life.

However, as seen above, she had just moments before chastised the Representative for having “no idea what Gwen Berry has gone through or what makes her feel as she does, and even less desire to learn about it,” only to turn around and assume things about Rep. Crenshaw – Bit hypocritical, isn’t it? 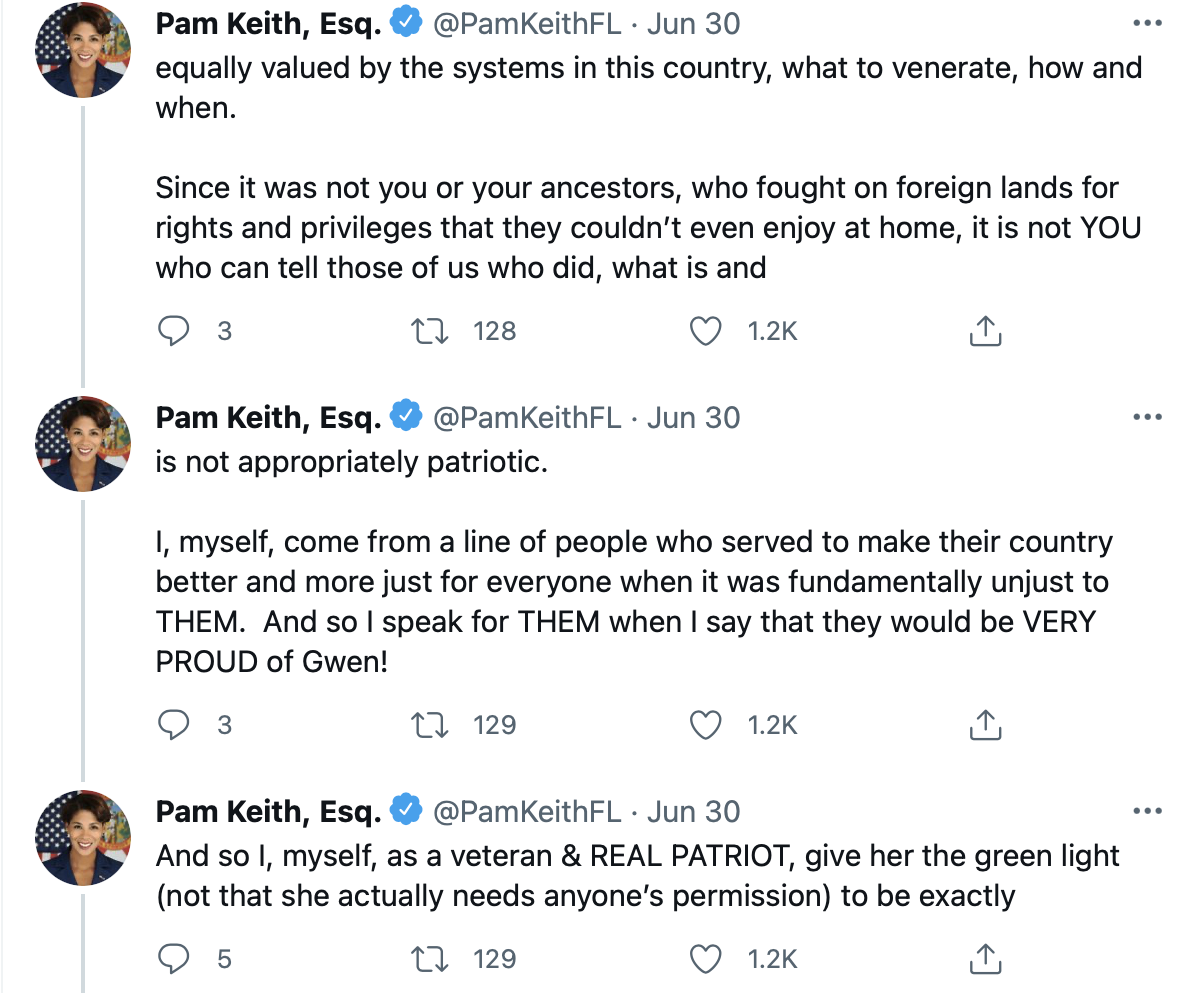 Things then proceeded to get even more interesting, as Keith next justified Berry’s actions, using her own privilege as a “REAL PATRIOT”, to grant Berry permission to disrespect the flag and the national anthem.

“And so I, myself, as a veteran & REAL PATRIOT, give her the green light(not that she actually needs anyone’s permission) to be exactly who she is, and to do exactly what she feels right to her & will celebrate and honor her athletic achievements one way or another.”

Undermining Rep. Crenshaw’s opinion even further whilst simultaneously proving just how privileged she truly is, Keith added,  “Just in case you’re still not getting the point of this missive, Dan: MY PATRIOTISM HAS OVERRULED YOURS!”

Enter Dune and Guardians of the Galaxy star Dave Bautista, who after reading Keith’s lengthy lecture, decided to give his opinion on Crenshaw’s criticism of Berry’s disrespectful of the US’ flag and anthem. 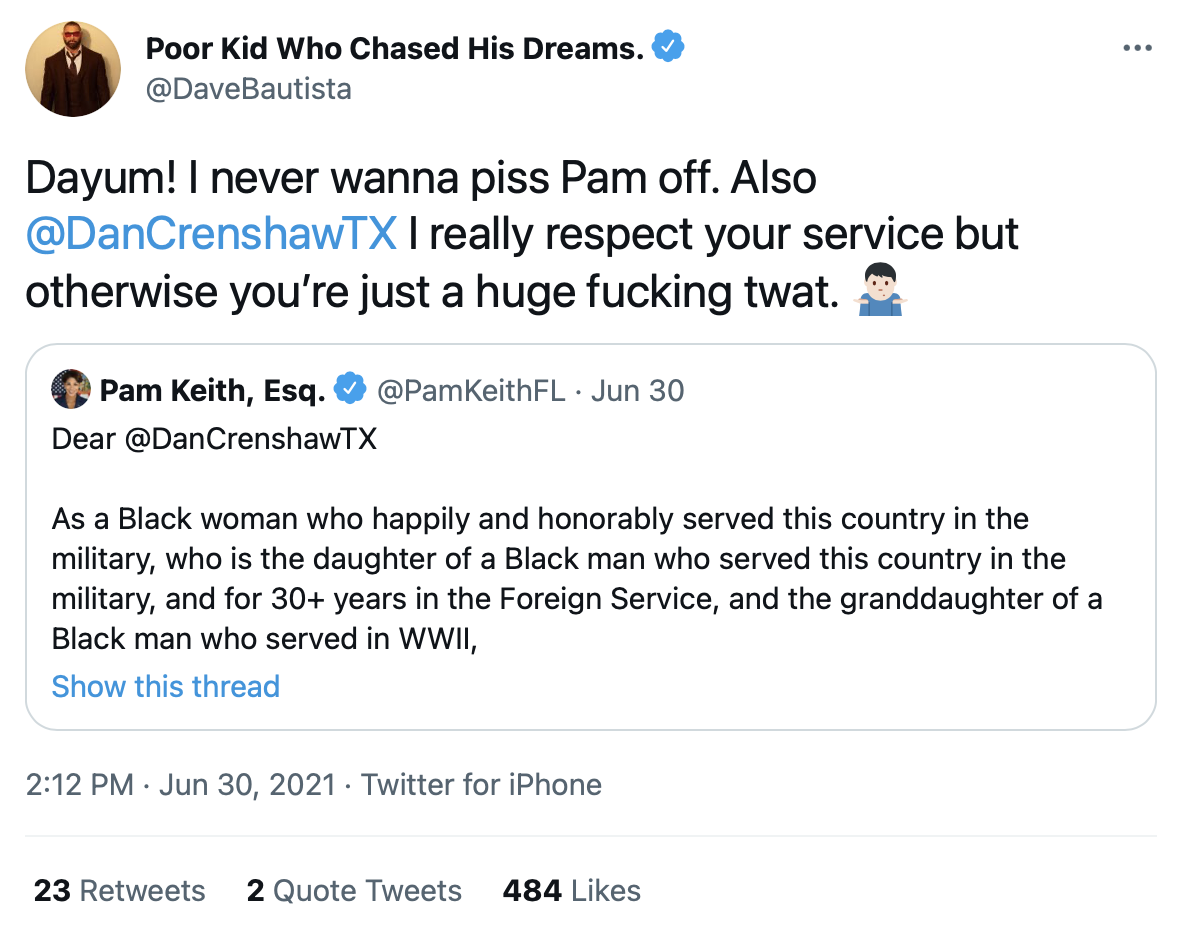 Not only is  Bautista insulting a United States representative, but he’s also supportive of Keith’s rant against the same representative, and thus transitively what she said about Republicans, Donald Trump supporters, and the disrespecting of the flag.

What’s more, the actor also contradicts himself, as he claims one moment that he respects what Crenshaw did for the country during his time as a Navy Seal, only to turn around and call the Representative names in response to his very valid opinion on someone who disrespected the flag.

However, Bautista’s response should come as no surprise to some, since the Guardians of The Galaxy star previously attacked Trump supporters by calling them “crowd of idiots” who were “willing to sit through [Trump’s] comedy routines,” before also proceeding to insult the former President by comparing him to Biff from Back to the Future. 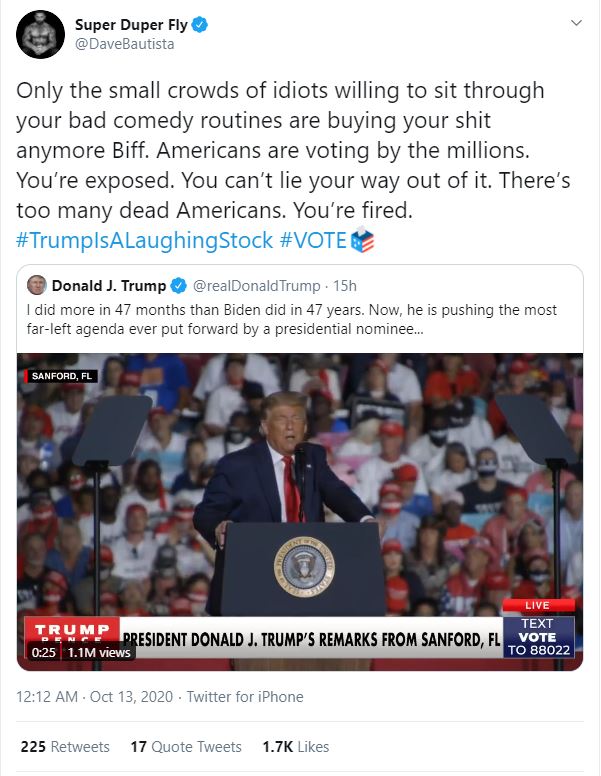 Bautista has also claimed that supporters of former President Donald Trump are “self righteous, ignorant, or just downright scummy,” which, again, only goes to show how intolerant the actor is towards people who don’t share his political views. 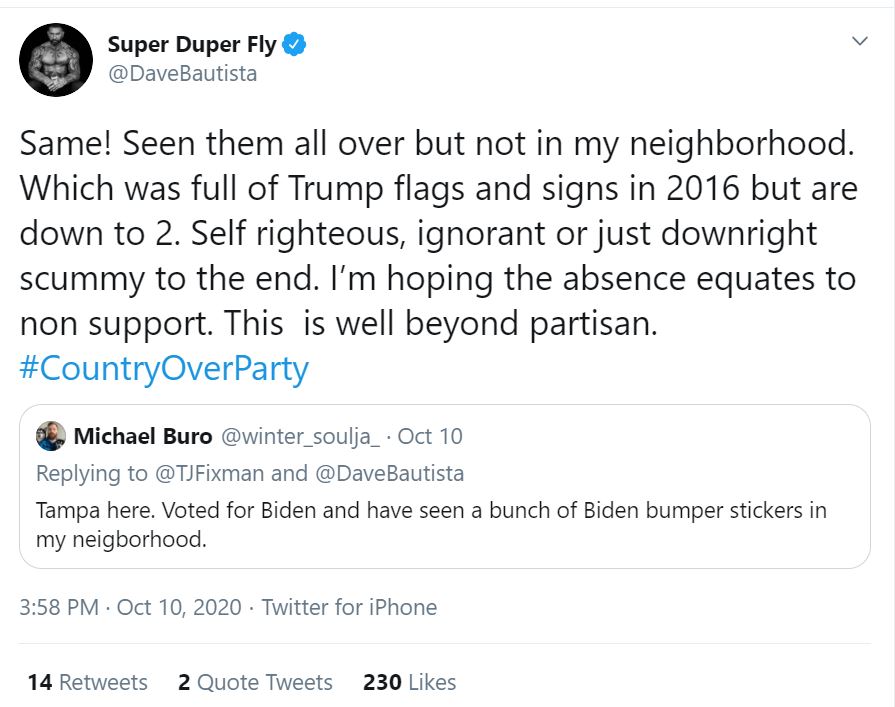 As of writing, Rep. Crenshaw has not replied to either Keith nor Bautista, in a move which is probably the best course of action right now.

Considering that both of the aforementioned individuals decided to inject feelings into their respective statements, their biased arguments were rendered almost invalid as soon as their name-calling began.

What do you make of Crenshaw’s criticism of Berry? Let us know all about it in the comments section down below or on social media.