A brand new rumor claims to reveal details about the upcoming Star Wars Disney Plus series, The Book of Boba Fett.

Few details have been released about the show, but it was confirmed by the show’s executive producer Jon Favreau that the show would be arriving on Disney Plus in December 2021.

He told Good Morning America in December 2020, “At the end of the show Boba Fett came out and it said The Book of Boba Fett coming December of 2021 and that wasn’t part of the big Disney announcement. But here’s the logo.”

He added, “So this is actually separate from The Mandalorian Season 3. But what we didn’t say in that announcement is that the next show coming up, Kathy said the next chapter, and that is going to be The Book of Boba Fett.”

The official Star Wars Twitter account noted, “The Book of Boba Fett, a new Original Series, starring Temuera Morrison and Ming-Na Wen and executive produced by Jon Favreau, Dave Filoni, and Robert Rodriguez, set within the timeline of The Mandalorian, is coming to Disney Plus Dec. 2021.” 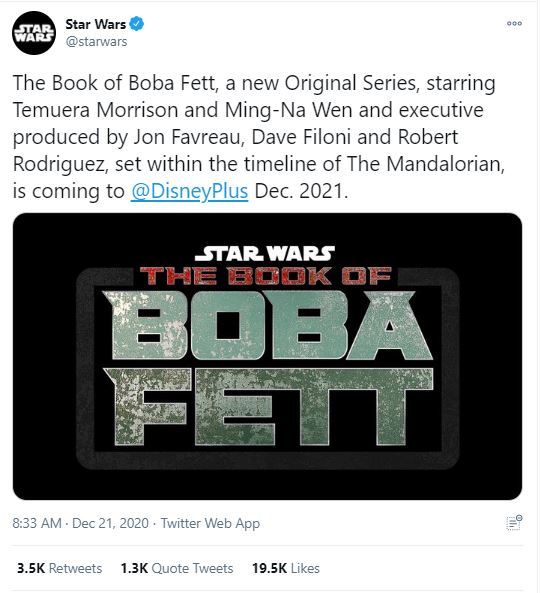 Actor Temeura Morrison, who plays Boba Fett, did reveal to Rotten Tomatoes in June that the show will feature flashbacks.

He stated, “Well, we can’t say too much, but we’re going to see his past and where he’s been since The Empire Strikes Back. Somebody pointed out he’s been kind of stuck in this one place, and now’s the time to actually go back in time and check out his journey and find out more about him.”

There have also been rumors that the show would feature multiple bounty hunters including Bossk and Cad Bane. But now we are getting some plot details about the show.

Star Wars News Net reports, “We have learned that, in the series, Boba Fett is in revenge mode. He will be going after everyone who did him wrong in the past, and he will also be looking for the other bounty hunters.”

They also note that Boba Fett will receive new armor and it’s possibly this new armor will be used “to help differentiate between the past and the present, as flashbacks are expected.”

It’s unclear if the bounty hunters did him wrong or he will be recruiting them in order to seek his revenge against the people who have wronged him.

Fett is no stranger to working with other bounty hunters in Disney’s current canon of Star Wars.

In The Clone Wars, Fett creates a crew that consists of Aurra Sing, Bossk, and Castas. The team appears in “R2 Come Home” as they attempt to assassinate Jedi Master Mace Windu by planting a bomb inside Jango Fett’s helmet on the bridge of the Republic cruiser The Endurance.

Fett has also worked with Cad Bane in the episode titled “Deception.” After his plot to assassinate Mace Windu is foiled, Fett is taken to Republic detention facility.

While in the facility, he works with Bossk to stage a prison riot in order to help Cad Bane and Jedi Master Obi-Wan Kenobi, who is disguised as bounty hunter Rako Hardeen, escape with a prisoner named Moralo Eval. Eval is plotting an assassination attempt against Chancellor Palpatine at the behest of Count Dooku.

In the episode the “Bounty,” Fett works with Bossk, Latts Razzi, Dengar, and C-21 Highslinger. He was also supposed to work with Oked, but he was killed by Sith assassin Asajj Ventress.

In order to replace Oked, Fett recruits Ventress for a mission involving transporting cargo and defending it from an attack led by a number of Kage warriors.

The bounty hunter Embo is also seen in the “Bounty,” but he’s not part of Fett’s team. He’s shown leaving the Fett’s base of operations just before Ventress, Bossk, and Latts Razzi entered.

In The Empire Strikes Back, Fett was tasked by Vader to hunt down Han Solo alongside Dengar, Bossk, 4-LOM, Zuckuss, and IG-88.

What do you make of this new rumor about Boba Fett seeking revenge in The Book of Boba Fett?