Ghostbusters: Afterlife is now available to see in movie theaters and moviegoers are letting their thoughts on the film known. 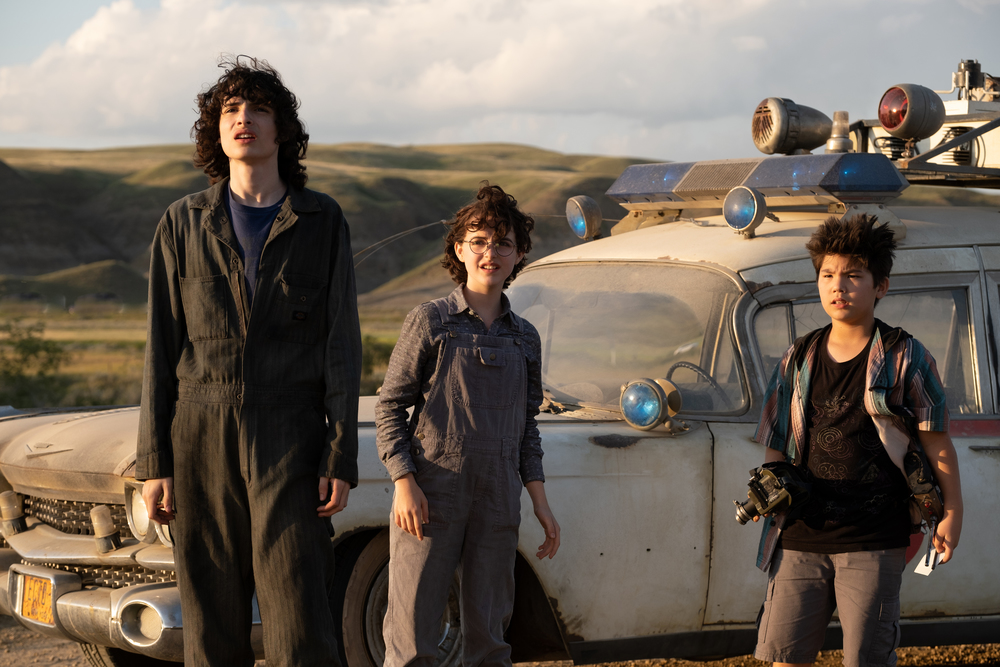 The All Audience score is slightly lower with a 95% rating. It has an average rating of 4.6 out of 5.

Here’s what moviegoers are saying:

Jason W gave the film 4 out of 5. He wrote, “I saw it last night. Was it perfect? No. Did it deliver on what I hoped for more or less I thought Mckenna Grace did a fantastic job as Phobe, the Harold Ramis stuff hit me right in the heart it wasn’t childish in how it was presented and the humor was on point to the original style it didn’t insult the audience and yes it was better than Ghostbusters 2.”

Hamilton C gave the film 5 stars. He said, “A heartfelt love letter to the classic movie.”

Michael D gave the film 5 stars. He wrote, “Absolutely fantastic movie. This movie is full of nostalgia for the original films and has amazing heart. Do not miss.”

The Ecto-1 and the RTV in Columbia Pictures’ GHOSTBUSTERS: AFTERLIFE.

Martin gave the film 4 out of 5 stars. He said, “Wonderful movie. It felt more like an Amblin Entertainment movie than Ghostbusters think Goonies, or ET, or even Super 8. I teared up right at the end. This movie was made with love. Some inconsistent pacing and a couple of dodgy bits with the score (which I loved) just not matching the screen took a star away. Well worth the ticket.”

Sarah W gave the film 4.5 out of 5 stars. She wrote, “This movie is action packed and entertaining. The cast does a well job acting the movie, and there are several parts that play homage to the original film. I would highly recommend watching this film.”

Louie gave the film 4 out of 5 stars. He wrote, “Fun movie. Lots of throw backs to the original. Really good sequel that doesnt feel like a sequel.” 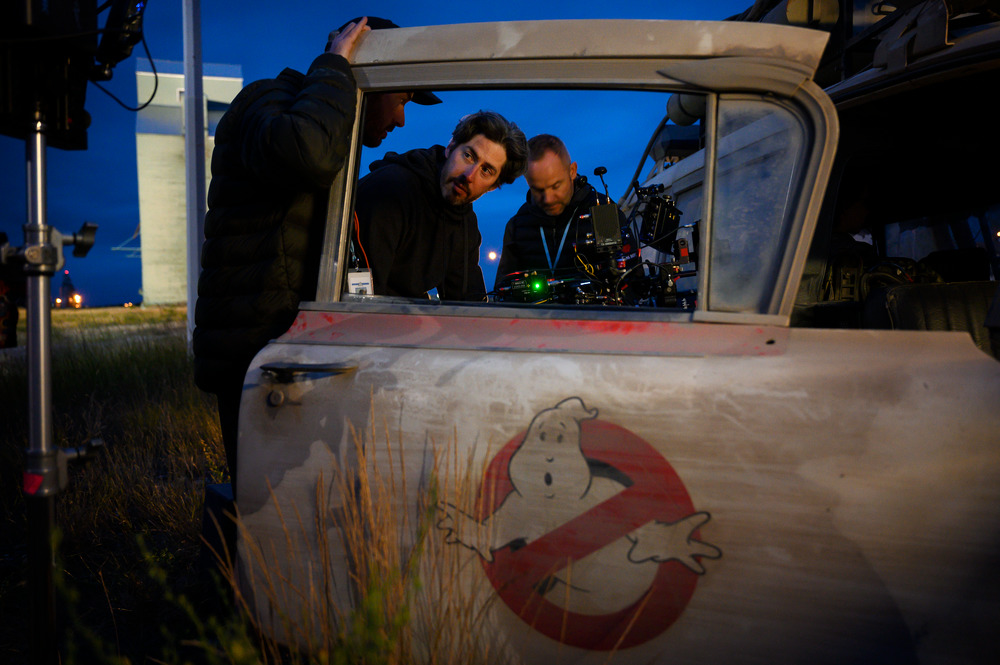 Director Jason Reitman with crew on the set of Columbia Pictures’ GHOSTBUSTERS: AFTERLIFE.

Abby H gave the film 1.5 out of 5 stars. She said, “Started off really slow and didn’t get much better until the last 30 minutes.”

Joe A gives the movie 5 out of 5 stars. He says, “Wholly fun and endearing. The movie Ghostbusters fans have been waiting for since 1989.”

Michael D gave the film 5 out of 5 stars as well. He wrote, “Amazing film, was really worried it would blow it, but instead was a great passing the torch film. Character Phoebe was funny, great lines, really enjoyed her performance.”

Rob G gave the film a perfect 5 out of 5 as well. He said, “The movie is everything I ever wanted out of a sequel. It does a great job of honoring the past while paving the way for the next generation of young Ghostbusters fans.”

David R gives the movie 4 out of 5 stars. He wrote, “The film manages a difficult balancing act between three objectives: being a love letter to the original, establishing a story to propel this new cast into this world, and bring a beautiful tribute to Harold Ramis. There’s not much more I could’ve asked for in a revitalization of the Ghostbusters franchise, and I hope we see more stories with these characters in this universe soon!” 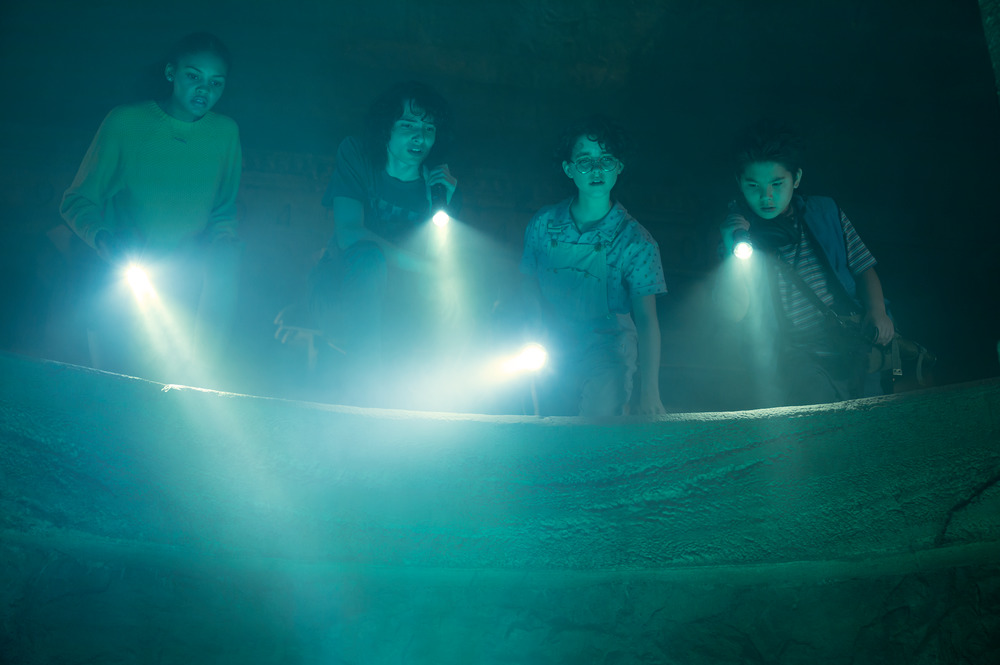 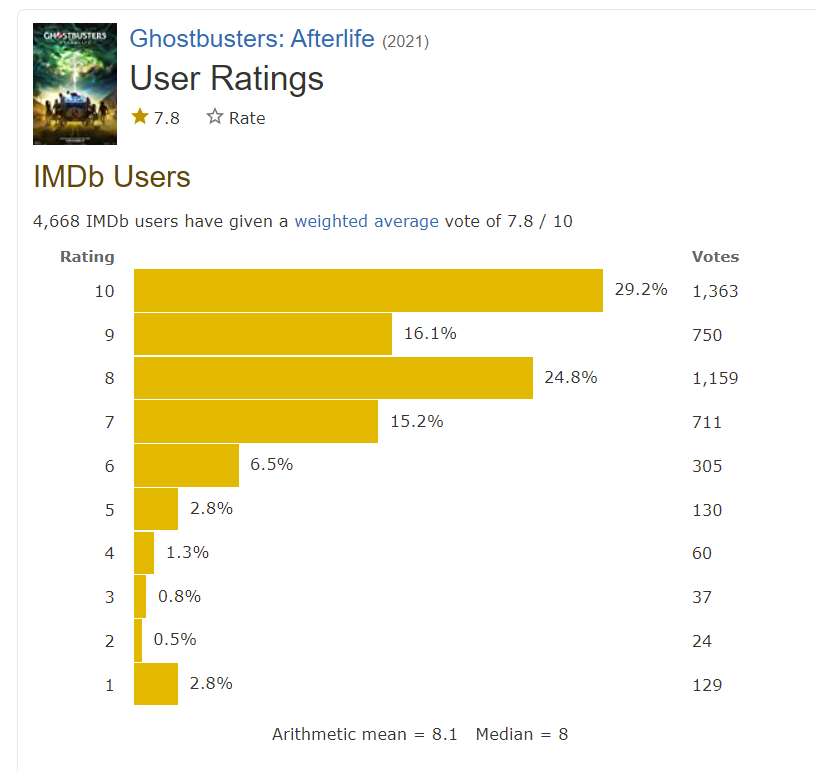 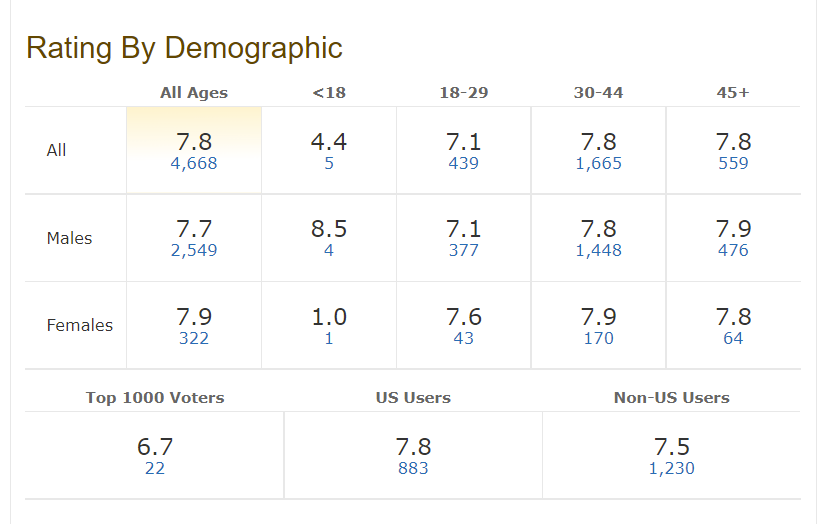 Here’s what IMDb users are saying:

FeastMode gives the film a 6 out of 10. They write, “Generally well-made movie. Much higher quality than the 2016 comedy version, and a lot more serious, with jokes that feel organic. I was entertained and invested. The two kid actors were the best part of this movie. I don’t consider myself a Ghostbusters fan, but I had a good time overall (1 viewing, opening night 11/18/2021)”

UniqueParticle gives the film a 9 out of 10. They write, “I absolutely loved this Ghostbusters definitely better than 2016 mess! This has everything you’d want in the series with comedy, amazing cinematography, great story I even went with a friend and he noticed a few plot holes I didn’t even realize it had some; I think everything was the way it should be. So much exciting bits that are feel good and has the perfect amount of surprises. I’m glad I got to see the advanced screening and I really hope the film gets the recognition it deserves!”

Dtucker86 gives the film a 5 out of 10. The user says, “I was a big fan of the first two Ghostbusters as well as the unfairly maligned 2016 reboot which I thought was just as good as the original. This new version had long been delayed due to the pandemic and I had really been looking forward to seeing it. Even though it is an “all right” effort I consider it somewhat of a let down. It relies too much on the “nostalgia” factor featuring footage of the first film and continuous references to what happened in 1984. They use the “marshmellow” man ghost and the green slimer from the original as well as the mother turning into a demon like Sigourney Weaver did talking in a demonic voice about “Zuel”. The new Ghostbusters team are four kids and I only found two of them likeable. Bill Murray, Dan Aykroyd, Ernie Hudson and Annie Potts (as well as a computer generated version of the late, great Harold Ramis) are also on hand. Its good seeing all of them again but they sure haven’t aged well. I look at reboots like this and think it is proof Hollywood is running out of ideas. Anyway, my friends let me give you some advice, if you want to have a good time at the movies rent the original Ghostbusters or the 2016 one.

jp_91 gives the film a 6 out of 10. The user states, “”Ghostbusters: Afterlife” is a good third part that brings nostalgia. The story is entertaining with some scenes that feel forced. The performances are good especially that of Paul Rudd. The cinematography is well done and the special effects do the job. An entertaining film that is totally fan service, every classic element of the original film is present, including the special appearances of the protagonists of the 1984 film, which is appreciated. A good movie but it could have been better.”

ilovefoodcoma gives the movie an 8 out of 10. They wrote, “I really enjoyed this movie. Seeing some old familiar faces definitely a bonus to this movie. The storyline is good & the CG is definitely the icing on the cake. Can’t wait for the next sequel~”

GT-Lar gave the film an 8 out of 10. He wrote, “Massive fan of the original and the sequel was good too , i did not like the remake from a few years ago , but this is a very good watch , take the kids or just go yourself for a bit of nostalgia …..!!!!!!!” 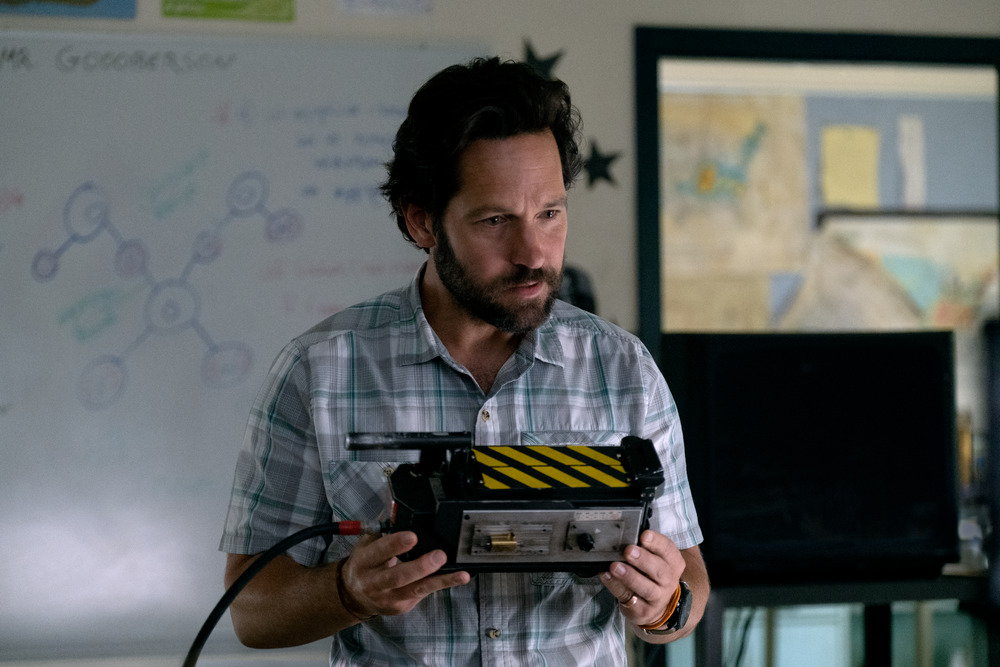 mariousa-54084 gave the movie a perfect 10 out of 10. The user wrote, “I am a huge fan of the original ones and was really disappointed from the female Version but this one blew all the doubts away… great movie hope for a next one.”

developmentczar gave the movie a 4 out of 10. The user wrote, “The fact that Hollywood focuses almost all of their collective energy grinding out one insipidly dull remake or spinoff after another is proof that they have purposely, for profits, either run out of original material or turned their backs on groundbreaking concepts. They choose lazy rehashing of the same crap to force feed the public their two hours of banal escapism from their mind-numbingly uninspired lives. These sheep willingly schlep to the multiplex to ingest items that propel their comorbidities and kill a few hours. A lack of creativity shines bright in Ghostbusters: Afterlife.”

MacReadysBeard gave the film an 8 out of 10. He wrote, “Being old enough to remember seeing the originals in the cinema this pass at the material did it justice. Its alittle about nostalgia sure but in this case its no bad thing if you enjoyed the original 2 then this one fits alongside them kinda nicely i think. Shame the last one with christine wiig etc just didnt land at all but it was a poorly written badly directed attempt, nothing to do with the ladies but the material sucked. This one the material hits , the story hits and it does tie in with the ghostbusters extended universe in certain areas – Worth the price of admission and a few geniunely good laughs along the way too.”

On Metacritic, the film has a User Score of 8.7 from 24 ratings. There are 22 positive ratings and 2 mixed ratings.

Japanorama gave the film an 8 out of 10. He wrote, “Loved this. Recaptures the magic of the first movies and while it’s total fan service, it’s the good kind. Thoroughly enjoyable and the cast are wonderful. The critics once again are so wide of the mark. Such a worrying trend we’ve seen these past few years of critics being completely out of touch with public opinion.”

Experiment626 gave the film an 8 out of 10. The user wrote, “Thoroughly enjoyed this movie. Honors the original movies as well as Harold Ramis. Had my theater cheering at the end. Looking forward to seeing this again. Stick around for the mid and end credit scenes.”

sulaco426 gives the film a perfect 10 out of 10. The user writes, “this is just a loveletter to the the franchise. a perfect end for the OG ghostbusters and a Promising new start to the new ones. as a fan, please watch it.”

Rich0980 gives the film an 8 out of 10. He writes, “Great film which is made for the fans. Make you laugh and cry. Mckenna Grace is utterly brilliant in it.”

Goreminister gives the movie a 10 out of 10. The user says, “Maybe a 10 is too high, BUT this is how you treat a beloved franchise right. Lovable charakters, a good script and most of all: Passion for the project. The new flick is filled with easter eggs, you may call simple fanservice, but isn´t it all about that? The fans? We waited such a long time for a GOOD new Ghostbusters movie and now we have it. The old crew passes the torch in a respectful way and beside of that: This movie is lots of fun. Perfect popcorn entertainment. Don´t listen to the critics, just grab your popcorn, lay back and enjoy a really heartwarming Ghostbusters film.”

Robert88 gave the movie a 10 out of 10 as well. He wrote, “What an amazing movie ghost busters is back .!!! Thank god they got rid of that 2016 garbage of a film and ghost now returned to its roots.” 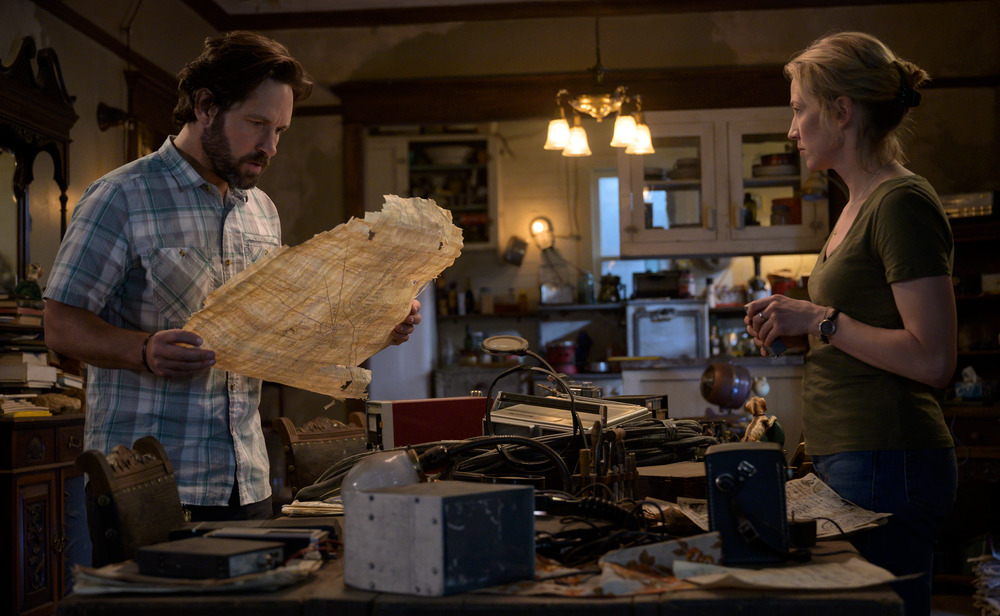 Calebmc678 gave the movie a 10 out of 10. He wrote, “Loved the movie, had a bunch of nostalgia and the ending was beautiful and emotional, for people who haven’t seen it don’t listen to the critics, this movie is definitely for the fans and if you’re a fan you’ll love the movie.”

Bhockzer gave the movie a 9 out of 10. The user stated, “Absolutely smashes it out of the park it in every way. Don’t worry if you haven’t seen any other Ghostbusters movie, writer/director Jason Reitman deftly handles catching viewers up on what they need to know, without it feeling forced or plodding, while at the same time creating some excellent call backs to the previous films for long time fans.”

Bananz06 gave the movie a 9 out of 10. The user stated, “Are you troubled by strange noises in the middle of the night? Do you experience feelings of dread in your basement or attic? Have you or your family seen this movie yet because it is glorious! Jason Reitman has surely delivered in this long awaited sequel to the original ghostbusters! The thing I find most about movies today is that when they make a sequel, they sometimes drift apart from the source material. But here, Jason takes his father’s franchise and makes the best possible sequel any fan could ask for!” 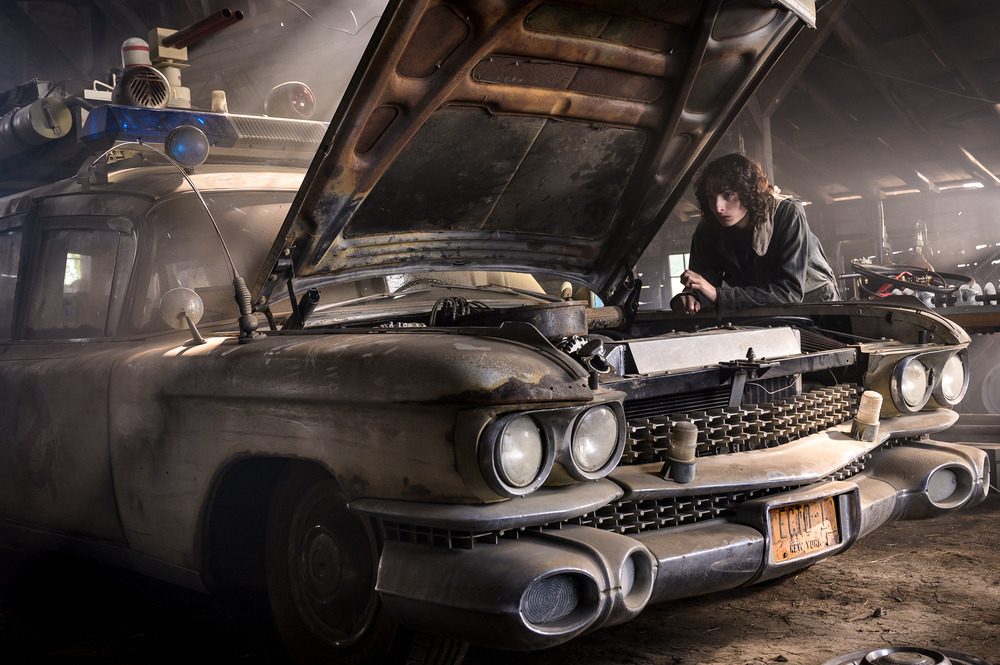 What do you make of these user reviews for Ghostbusters: Afterlife?