Some fans are concerned about the anti-police and anti-white beliefs of Warhammer 40,000: Space Marine II‘s senior writer. 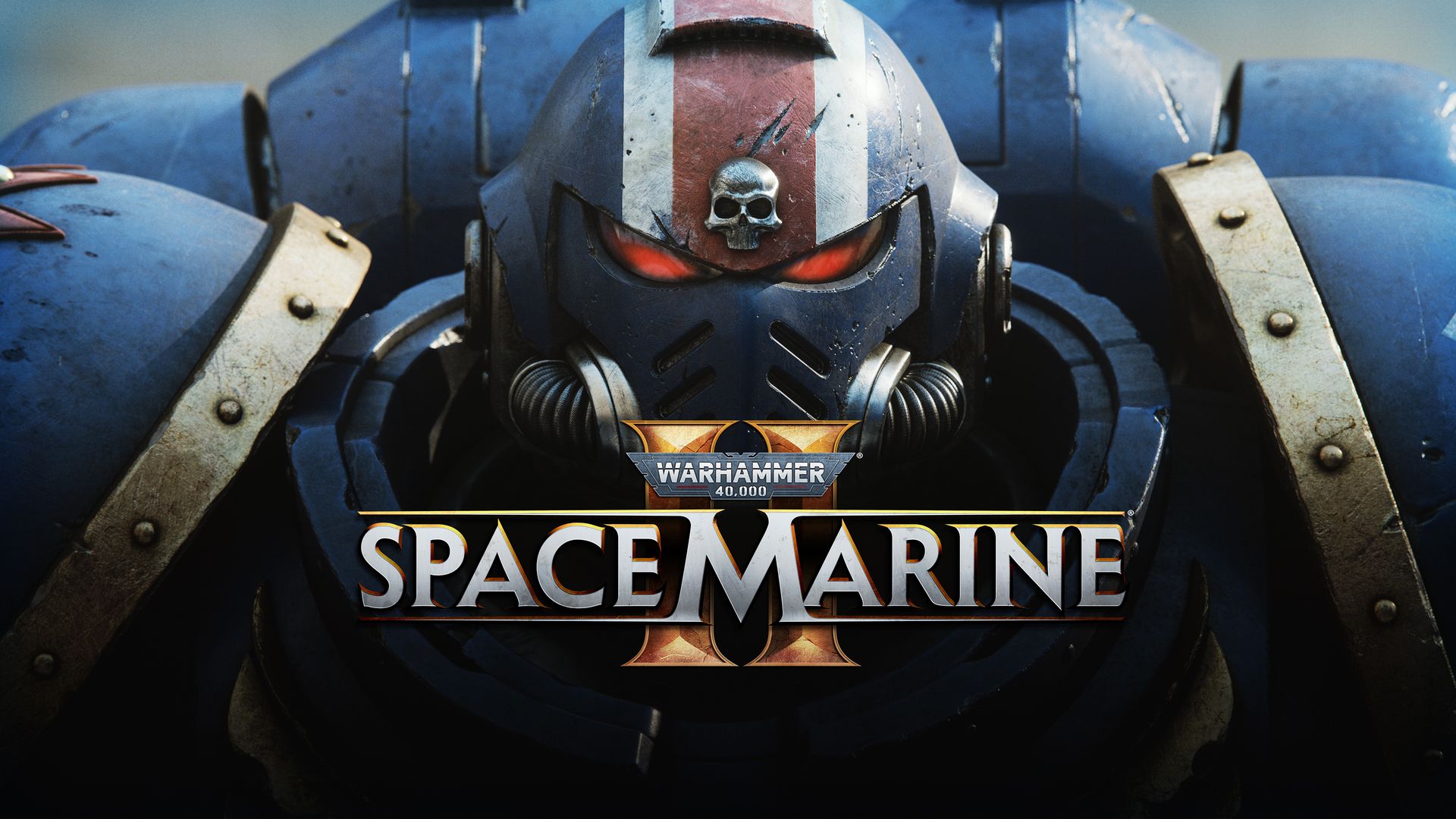 Announced for PC, PlayStation 5, and Xbox Series X|S at the recent The Game Awards 2021 in a moment that came as a genuine surprise to Warhammer fans, especially in light of how the first entry in the hack-and-slash shooter series was released over 10 years ago, Warhammer 40,000: Space Marine II will see the long-awaited return of Captain Titus – or rather Lieutenant, based on his armor – following his apprehension by Inquisitor Thrax and his Black Templars at the end of the last game.

Though details on the game are scarce given how early on the game is in development, it has been confirmed that Titus himself has been recast, with Clive Standen (Mirage, Vikings, Taken TV series) set to succeed Hollywood actor Mark Strong (Shazam!, Cruella) in the role. 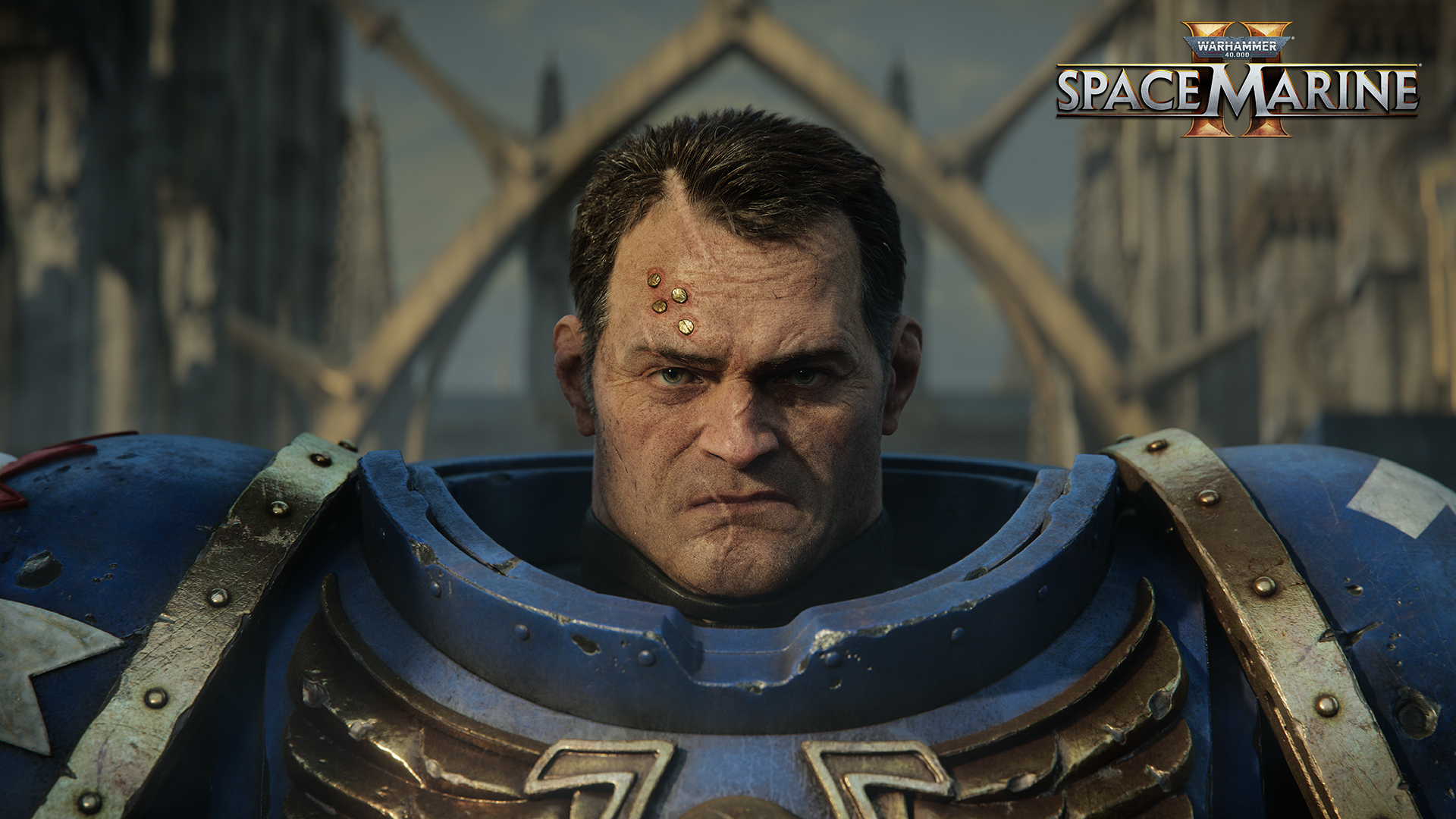 While most of the comments made in the wake of the game’s announcement have been made in praise of the fact that it was even being made, a sizeable amount of discussion centered around Senior Writer Ashley Cooper’s identity as a transgender woman, which some even heralded as a positive sign of the game’s direction [1, 2]. 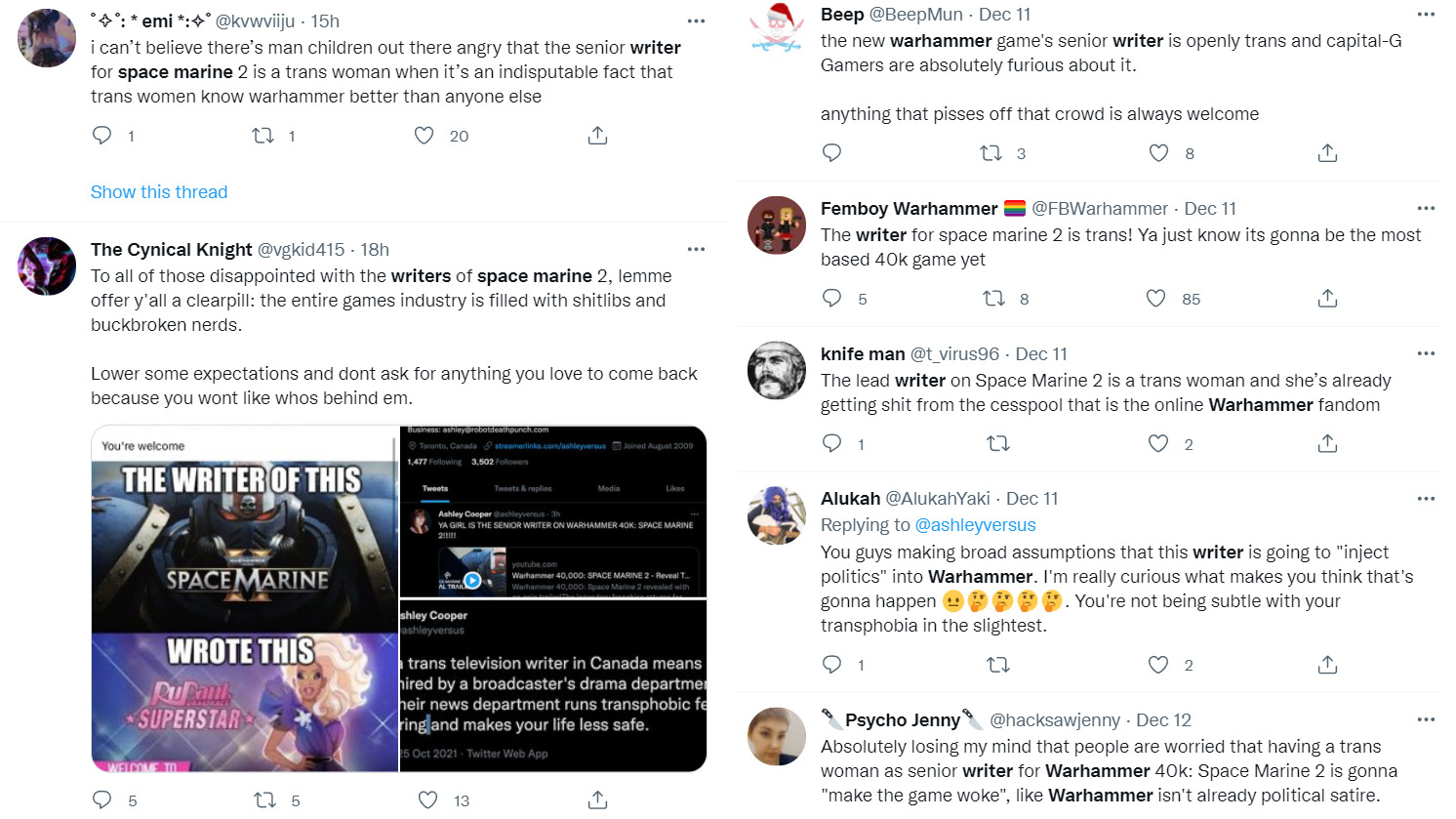 However, some fans have taken issue with the reveal of the Gotham Knights and RuPaul’s Drag Race writer Ashley Cooper as part of the game’s writing team, with her espoused political and social beliefs garnering concerns from fans who have grown tired of the ever-growing trend of using popular IPs to promote left-wing ideals.

Aside from a recent assertion that she “still [gets] full body chills when Rey powers up the lighsaber for the first time at the end of [Star Wars: The Force Awakens],” most of Cooper’s ire-drawing comments seemed to have come from around the time of the death of George Floyd and the resulting Black Lives Matter riots

These included regular calls to defund the police and declarations that ‘All Cops Are B—–ds (ACAB)’ – including hall monitors. 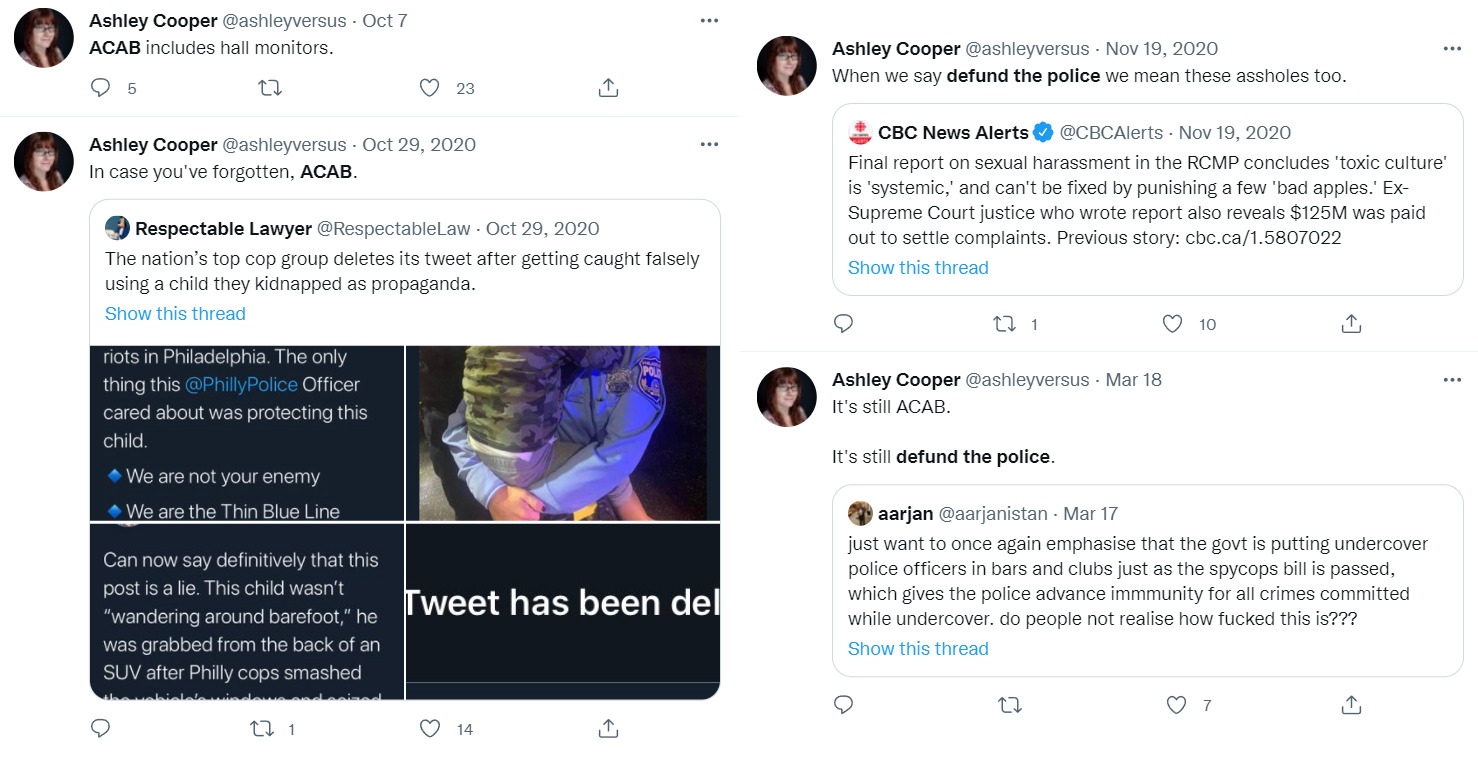 Cooper also seemingly advocated for the riots, tweeting in July of 2020, “‘We must return to civil discourse’ is ‘leave me to my bigotry in peace!’ in well-off white speak.”

Despite being white themselves, Cooper has also made tweets that could be seen as bigoted against white individuals, or at the very least white straight men, including one in which she insisted that “Comics don’t belong to you. Comics never belonged to you,” and another where she advocated for not casting “cis white men in stuff for a year and see what happens. Just for fun.” 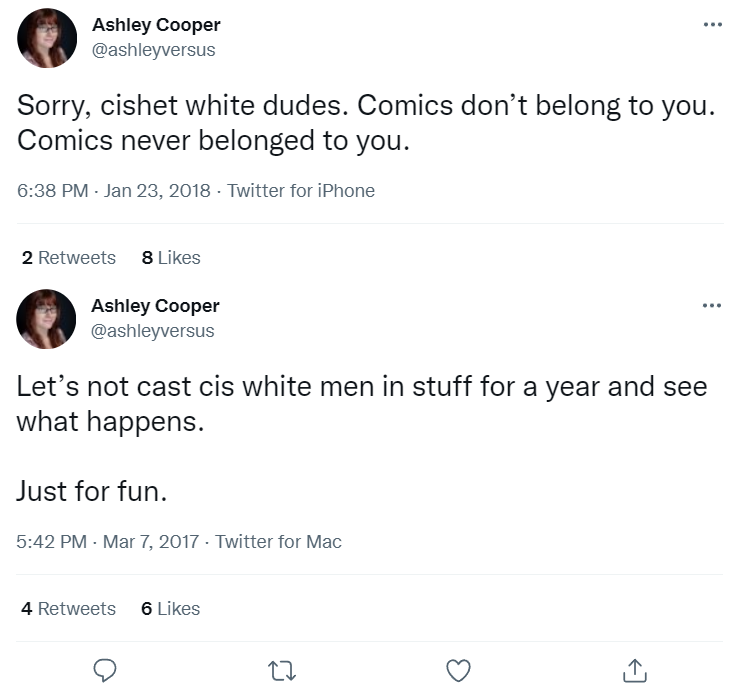 Soon after their social media history came to widespread attention, Cooper’s position was publicly defended by Warhamer 40,000: Space Marine II Creative Director Oliver Hollis-Leick, who attempted to assure fans that the Senior Writer had ability to put aside their beliefs for the sake of the game’s story.

“Ashley is one of the writers on our team, which includes myself,” Hollis-Leick explained to a number of worried fans on Twitter [1, 2]. “We’re working hand in hand with Warhammer and Black Library to create a true 40k adventure of epic scale. All we care about is delivering an experience that honours everything that makes 40k what it already is.” 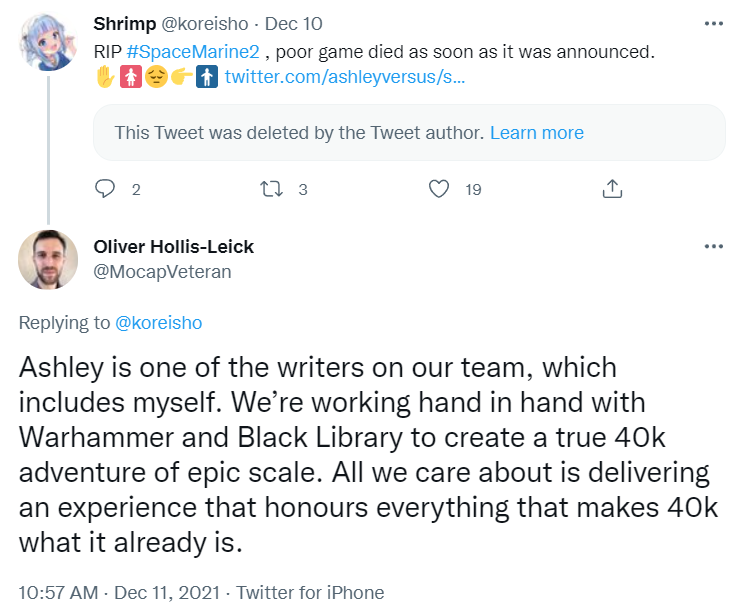 After receiving a wave of skepticism from fans, Cooper deleted their initial announcement tweet, eventually posting a more somber follow-up message in an attempt to reassure fans of their commitment to the series’ identity.

“We know how much this universe means to you,” wrote Cooper. “We know how much you have hoped for Titus to continue his story. We, and Games Workshop, want to do the game justice, and the fans proud.” 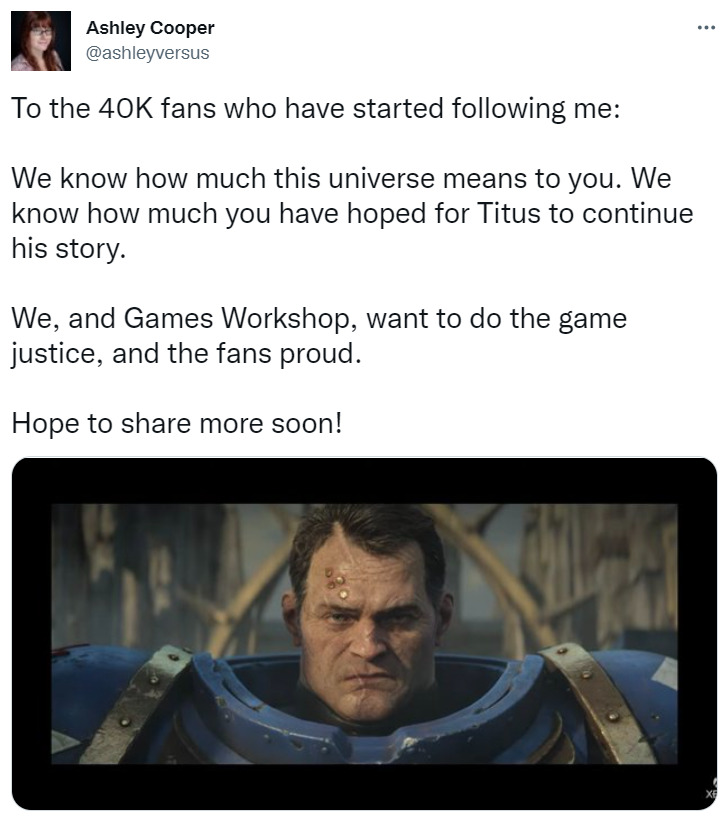 One such critic, Twitter user Lord Metal Man, explained the situation to Cooper, writing, “Genuinely hope you live up to that promise. I hope you are aware of the burden you have taken here.”

“Do not take anything said by anyone,” the user continued. “We’ve had our hopes trampled on and mocked too much in the past. It has left us all very cynical. Let us see what time brings.”

In response to Lord Metal Man, Hollis-Leick continued his attempt to extend an olive branch, speaking with one fan who feared “stupid inserts of current day nonsense, identitarianism & unwanted politiking” and claiming that the writers had dedicated themselves to the series’ lore.

He also revealed that Space Marine II’s story has the approval of Warhammer 40,000 author George Mann (Will of Iron, Revelations, and The Fallen), and promised that the game will match the tone the franchise is known for. 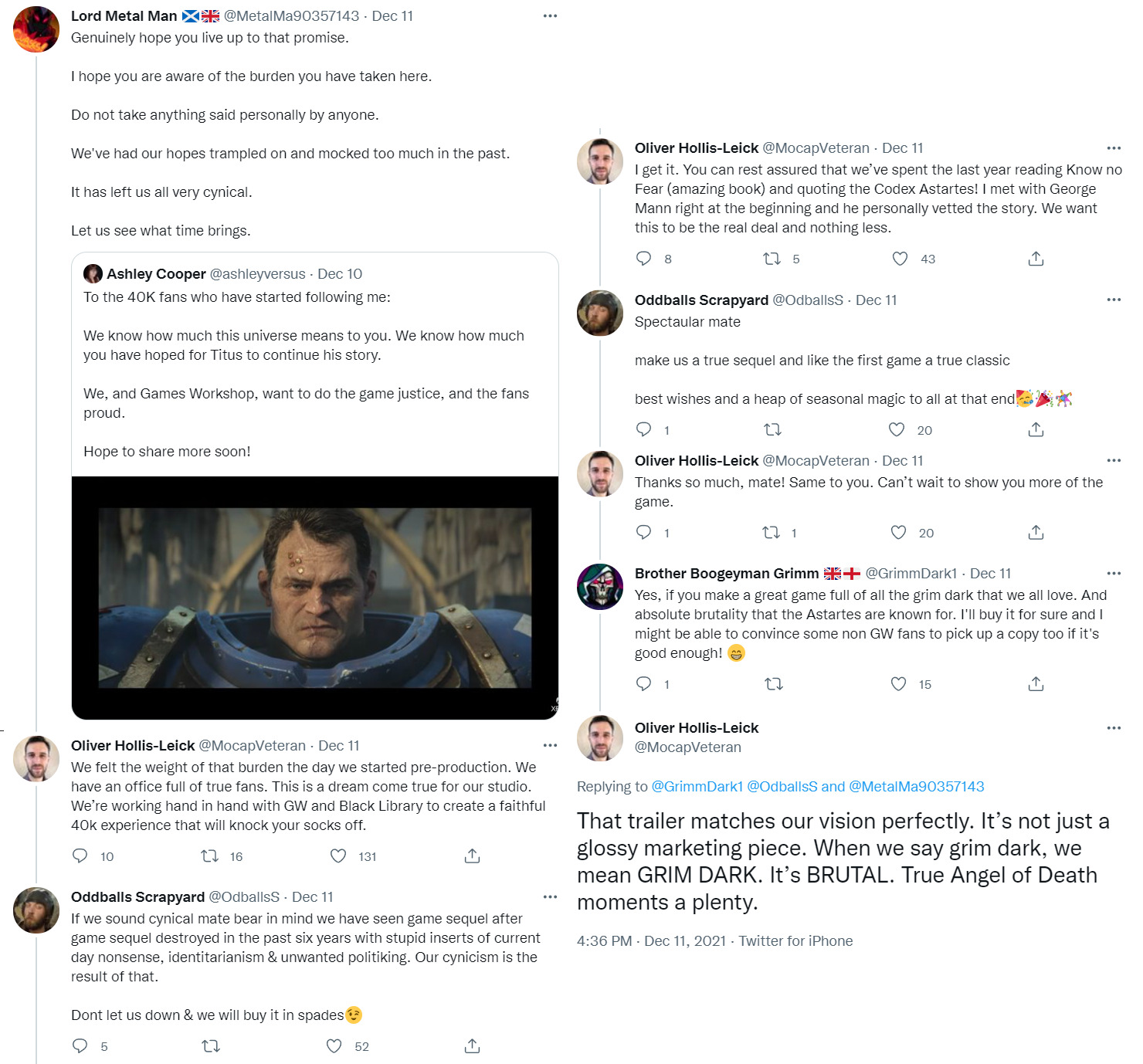 This statement was seemingly made in response to the entry of a player using the name “Austrian painter” and wearing clothes adorned with Nazi iconography in a recent Spanish tournament. Organizers ruled that those who refused to play against him were forfeiting. 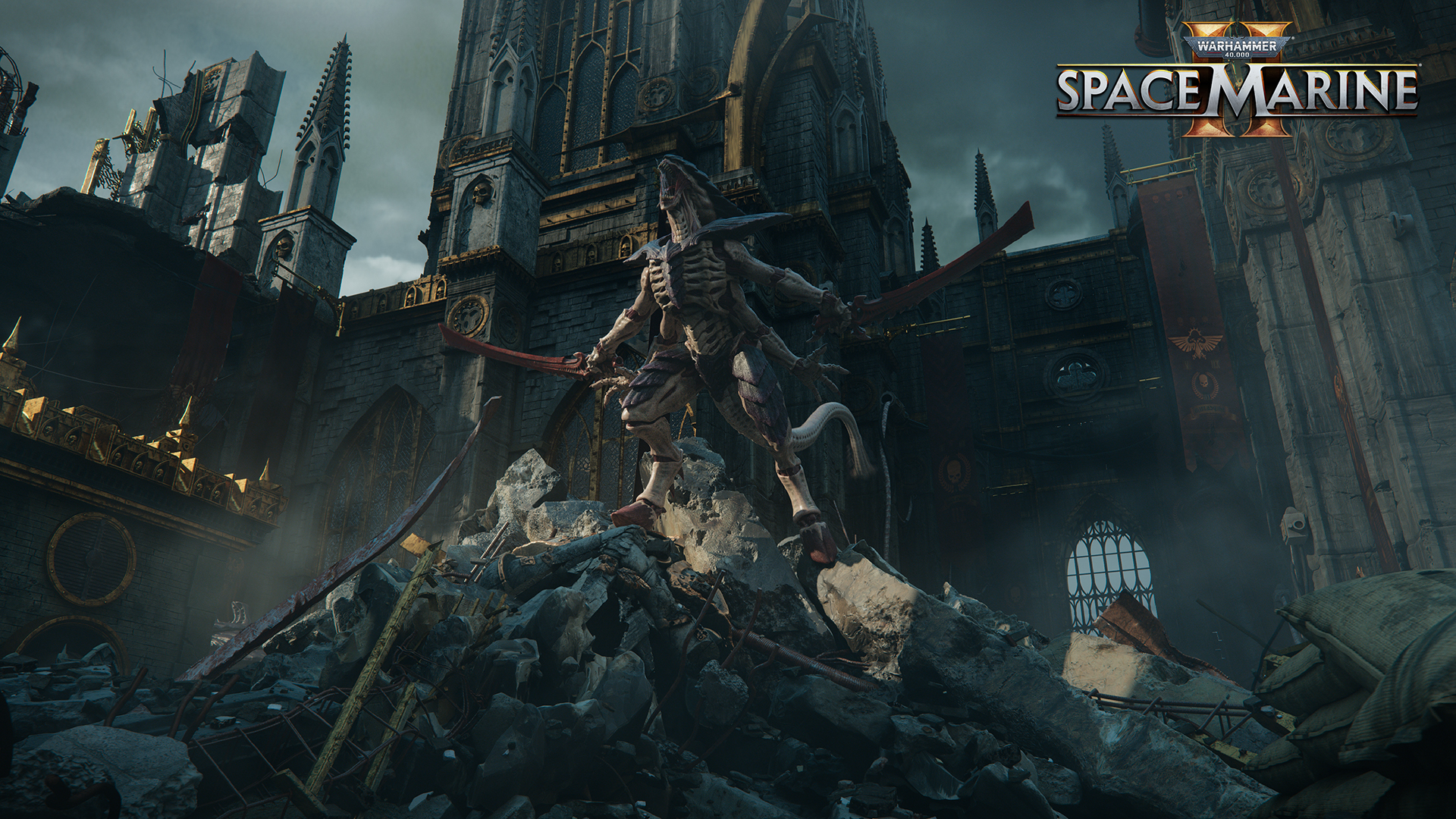 The universe of Warhammer 40,000 is often mistaken as praising totalitarian dictatorships and far-right-wing ideals. The lore dictates that after a golden age of prosperity, the near-death of the Emperor of Mankind – who specifically promoted reason above blind faith under the Imperial Truth – was followed by a period of blind worship which led to a dark age of inquisitions and endless war against the forces of Chaos itself.

Titus felt the results of this first hand. Despite having felled the Chaos Sorcerer Nemeroth at the end of the first game, his ability to resist psychic attacks and decision to stray from the teachings of the Codex Astartes saw him being taken into captivity under accusations of Heresy. 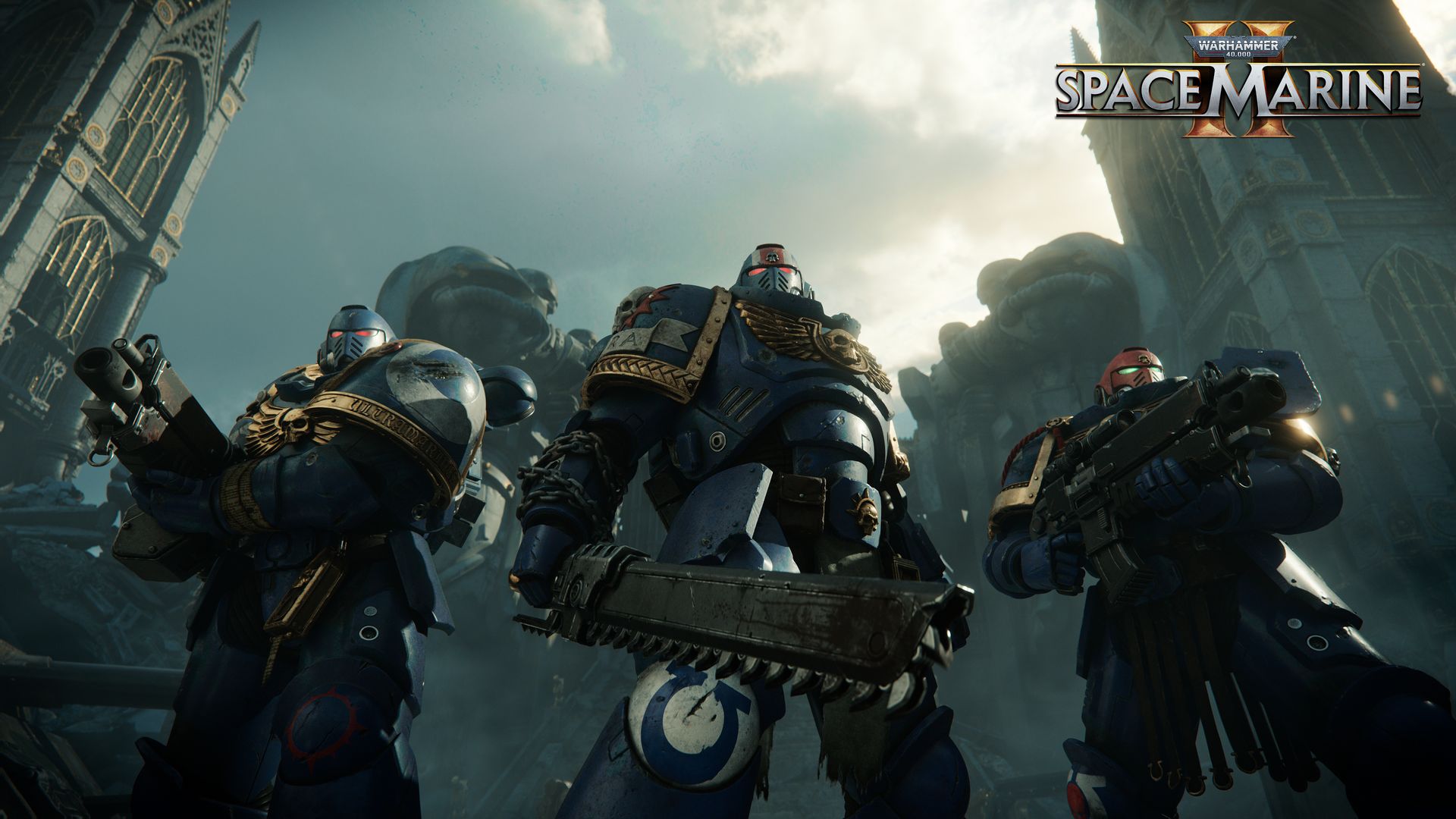 We’ll see how his story plays out in Warhammer 40,000: Space Marine II.

What do you make of Cooper’s promise to do the world of Warhammer 40,000 justice? Let us know your thoughts on social media or in the comments down below!

NEXT: Nexon To Develop New PvE-Focused RPG Set In Warhammer Age Of Sigmar