A new report claims that The Walt Disney Company and Pixar will include a gay relationship in their upcoming Lightyear film. 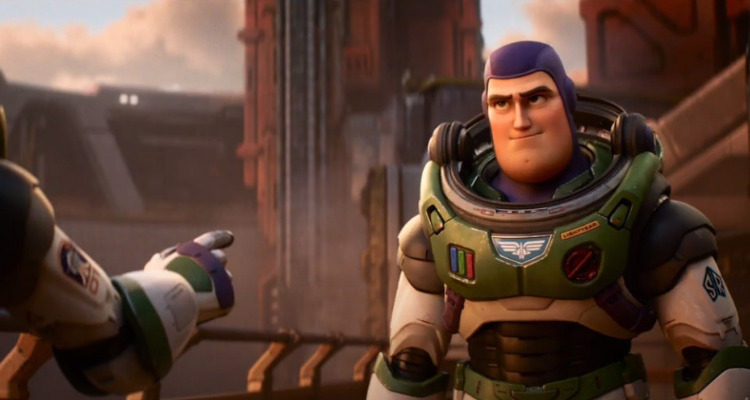 This new report comes from Variety and claims that a source informed them that the film “does feature a significant female character, Hawthorne (voiced by Uzo Aduba), who is in a meaningful relationship with another woman.”

The report goes on to add that Pixar and Disney reportedly had cut a kiss between these two characters, but it has now been restored following The Walt Disney Company’s revelation that they were opposing a Florida bill aiming to prevent instruction of gender identity and sexual orientation in school to children in kindergarten through third grade.

She wrote on Twitter, “I know some of you are  disheartened by the Eternals Rotten Tomatoes score, considering it features the 1st LGBT couple in the MCU but don’t worry, Disney is not giving up!”

“I hear there is substantial LGBT representation in Lightyear as well! (Not Buzz, another character),” she added. 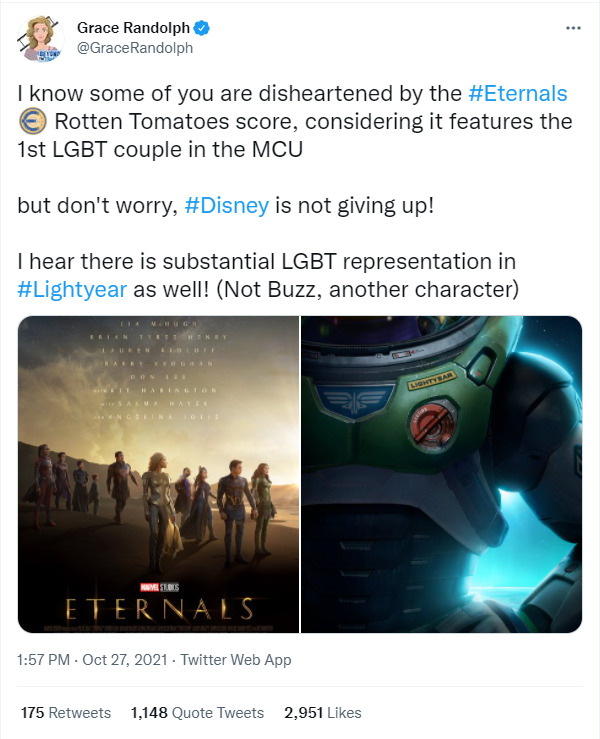 Along with the claim that Disney previously cut and are now including a gay kiss in the film, Variety also cited anonymous sources at Pixar claiming LGBTQ+ content in their films had been cut.

A letter had previously been sent to Bob Chapek by Pixar employees and their allies that asserted Disney had been censoring Pixar films.

In the letter they claimed, “We at Pixar have personally witnessed beautiful stories, full of diverse characters, come back from Disney corporate reviews shaved down to crumbs of what they once were.”

“Nearly every moment of overtly gay affection is cut at Disney’s behest, regardless of when there is protest from both the creative teams and executive leadership at Pixar,” the employees claimed. “Even if creating LGBTQIA+ content was the answer to fixing the discriminatory legislation in the world, we are being barred from creating it. Beyond the ‘inspiring content’ that we aren’t even allowed to create, we require action.”

Variety claims their sources informed them that LGBTQ symbols such as the rainbow were removed from Soul and Inside Out. Ironically, the rainbow was co-opted by the LGBTQ+ lobby. It was originally the symbol God gave to Noah to signify his covenant with him.

Genesis 9:13 states, “I set my bow in the clouds to serve as a sign of the covenant between me and the earth.”

Along with the alleged removal of these symbols, Variety reports, “Other sources said same-sex couples were also removed from the background from these films.”

What is rather interesting about the Variety report is that it rebukes the idea that Disney corporate was the one cutting content promoting disordered behavior from the films.

Instead, the outlet asserts the removals “were purportedly driven either by the individual movie’s filmmaking team or by the studio’s own leadership.”

Variety’s Adam B. Vary declares, “Effectively, Pixar engaged in self-censorship, say these sources, out of an abiding belief that LGBTQ content wouldn’t get past Disney review because Disney has needed the films to play in markets traditionally hostile to LGBTQ people: namely China, Russia, much of West Asia and in the American South.”

In Disney and Pixar’s “Soul,” a middle-school band teacher named Joe finds himself in The Great Before—a fantastical place where new souls get their personalities, quirks and interests before they go to Earth. Determined to return to his life, Joe teams up with a precocious soul, 22, to show her what’s great about living. Featuring Tina Fey as the voice of 22, and Jamie Foxx as the voice of Joe Gardner, “Soul” will debut exclusively on Disney+ (where Disney+ is available) on December 25, 2020. © 2020 Disney/Pixar. All Rights Reserved.

Pixar previously included the promotion of disordered behavior in their Toy Story franchise, which Lightyear is apart of.

The studio included a homosexual couple in Toy Story 4. When Bonnie is dropped off for orientation for kindergarten two women are shown giving a hug to a young boy.

That same couple were also seen after kindergarten orientation ended with the young boy showing off his art project to them.

The studio also produced a short called Out featuring a gay man named Greg and his boyfriend, Manuel. 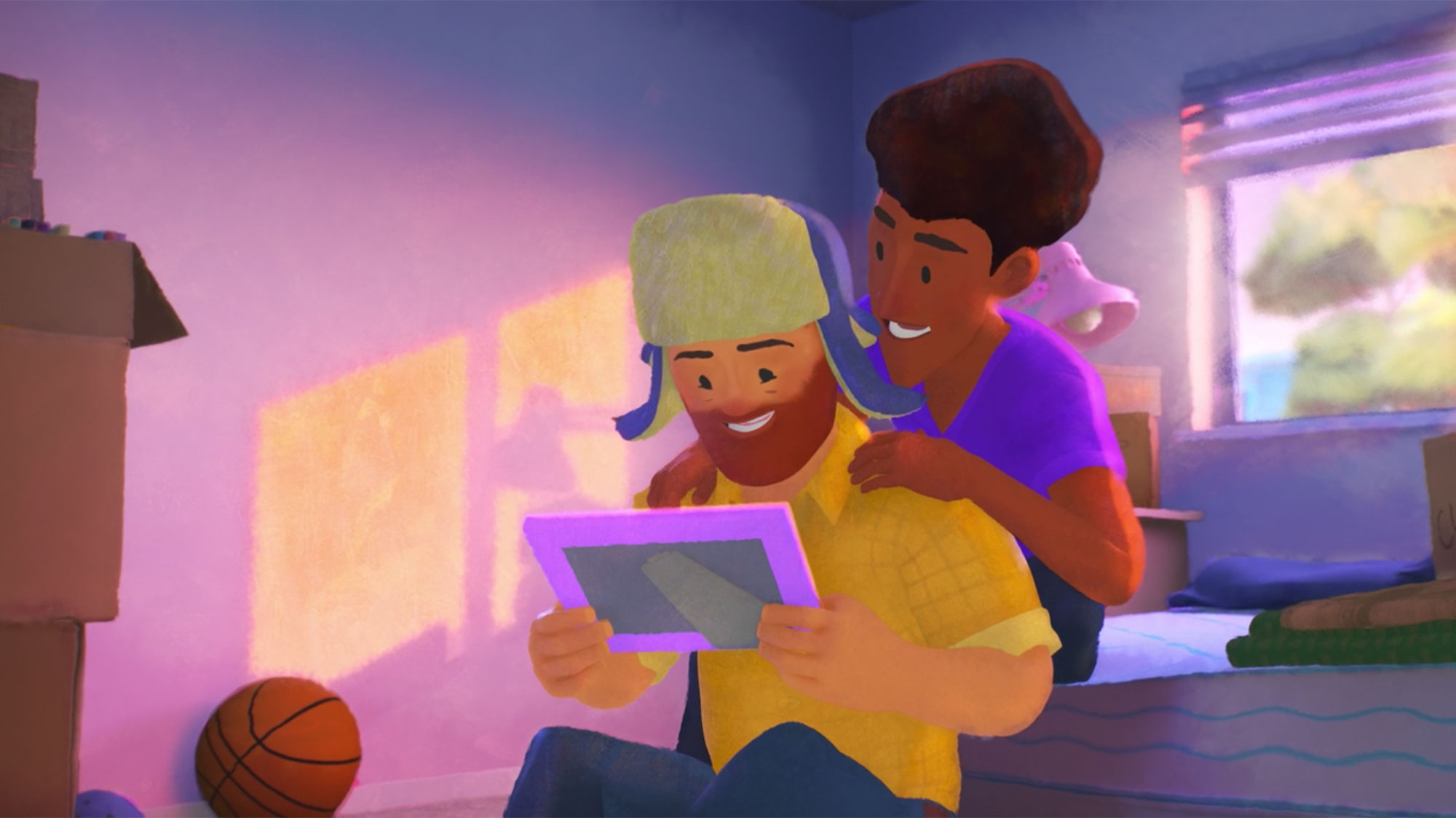 What do you make of this report that claims Pixar will now be including a gay kiss that had allegedly been previously cut from the film?

NEXT: Disney Employees Plan To Walkout, Issue Demands In Protest Over The Company’s Response To Florida’s Anti-Grooming Bill