Star Wars Story Group member Pablo Hidalgo referred to as a “mad genius” by Obi-Wan Kenobi writer Joby Harold recently attempted to justify the canon-breaking revelation in the series that Kenobi did not know that Darth Vader is alive.

Harold spoke with TheWrap telling the publication that he didn’t originally pitch Kenobi not knowing that Darth Vader survived their battle.

“That was actually not something I pitched originally,” Harold stated. “That was something I discovered along the way, and sort of had to confirm with Pablo [Hidalgo] and really think, ‘Hold on a second, what does he actually know?”

Harold then listed off a string of questions implying he and Lucasfilm did not realize that Kenobi knows that Anakin Skywalker is Darth Vader.

Harold questioned, “Does he know the moniker Vader? What would that mean? Can he associate the two? What was he cognizant of? How isolated is he? Where’s Vader at that time? Where’s his reputation and how well known is he?’ and all those pieces of the puzzle.”

Clearly, Kenobi knew that Anakin Skywalker was Darth Vader as in Revenge of the Sith, Kenobi views security footage that shows Darth Sidious referring to Anakin as Lord Vader. Sidious says, “You have done well, my new apprentice. Now, Lord Vader, go and bring peace to the Empire.”

In fact, shortly after viewing the security footage, Yoda even tells Kenobi, “Twisted by the dark side young Skywalker has become. The boy you trained, gone he is. Consumed by Darth Vader.”

Harold would then explain to TheWrap why he wanted Kenobi to discover Darth Vader was still alive in the show.

“The great piece of storytelling you can use is getting to Ewan play the moment of realization that that which haunts him is still alive. And what does that mean for him? There were many avenues that I could take him down, all of which hopefully are good opportunities to tease out story as we continue. But it all comes down to, is it viable within canon to play that card? Which it was.”

“Which is great, because that allows you, at the end of Episode 2 and the beginning of Episode 3, it gets you so much that feels essential to the fundamental story, which is Obi Wan, Vader, that which haunts you, facing the past, everything that comes to fruition in 3 and beyond,” he continued.

“It was a good day when we realized we could use it and do it. It made the story active, especially for the viewer that isn’t as familiar with canon as we all are,” he added. 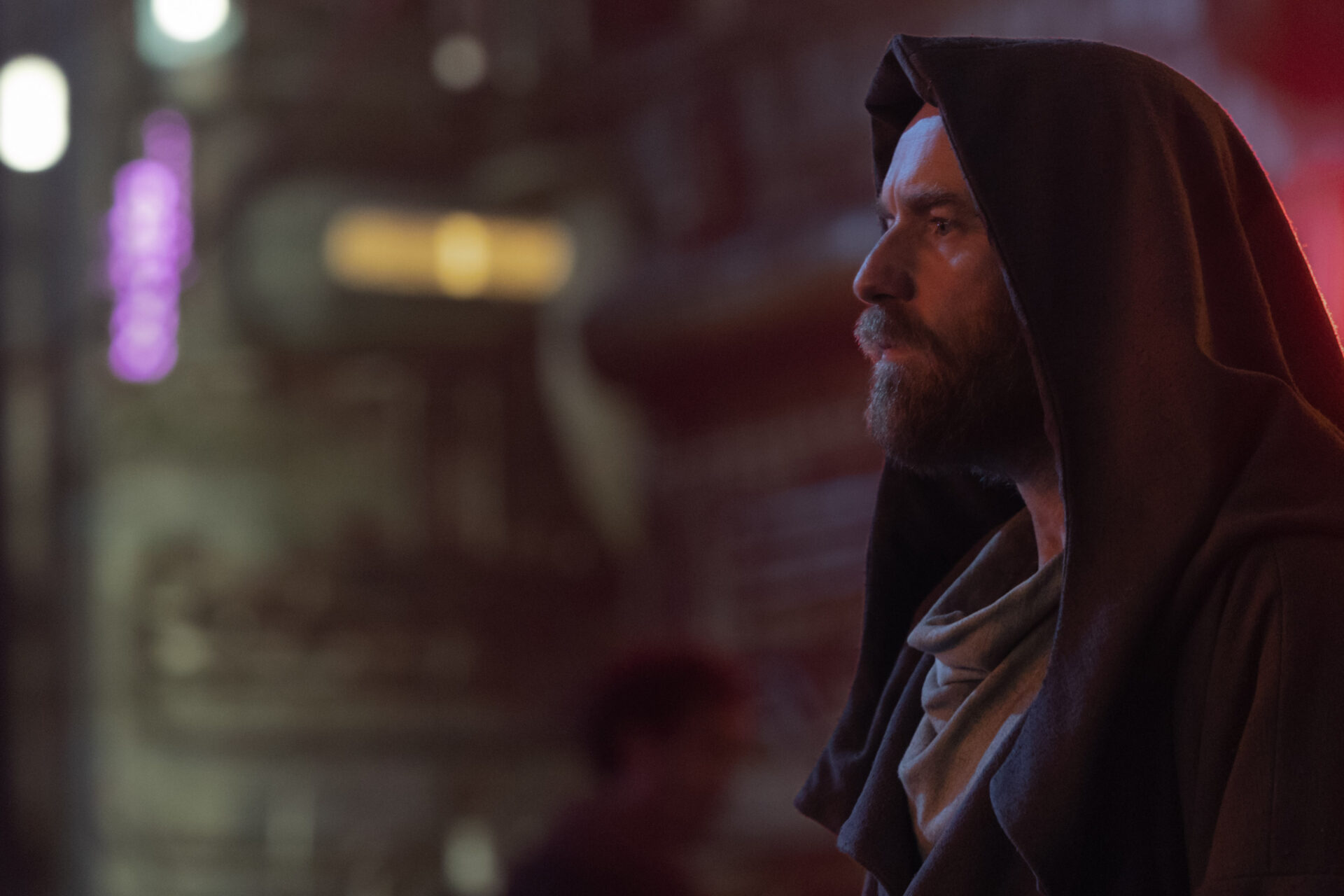 In Obi-Wan Kenobi episode 2, it’s revealed by the Inquisitor Reva to Kenobi that Darth Vader is still alive. As she attempts to locate Kenobi in hangar bay, Reva tells him, “I’m just going to take you to him. Lord Vader will be pleased.”

It’s at this moment that the show reveals that Kenobi didn’t realize Vader was still alive as after a brief shot of Kenobi’s emotions upon hearing Reva’s taunting, it returns to Reva who says, “You didn’t know. He’s alive, Obi-Wan. Anakin Skywalker is alive.”

However, Obi-Wan Kenobi knew that Darth Vader was still alive following their battle on Mustafar. This is made abundantly clear during a conversation between Luke Skywalker and Obi-Wan Kenobi in Return of the Jedi.

When Luke questions Kenobi about the other Yoda spoke of, Kenobi tells Luke, “The other he spoke of is your twin sister.” Luke retorts, “But I have no sister.” Kenobi then explains, “To protect you both from the emperor, you were hidden from your father when you were born.”

“The emperor knew as I did, if Anakin were to have any offspring, they would be a threat to him. That is the reason why your sister remains safely anonymous,” Kenobi stated.

Despite the revelation in the Disney+ Obi-Wan Kenobi series clearly contradicting this scene from Return of the Jedi, Pablo Hidalgo attempted to justify the canon-breaking change. 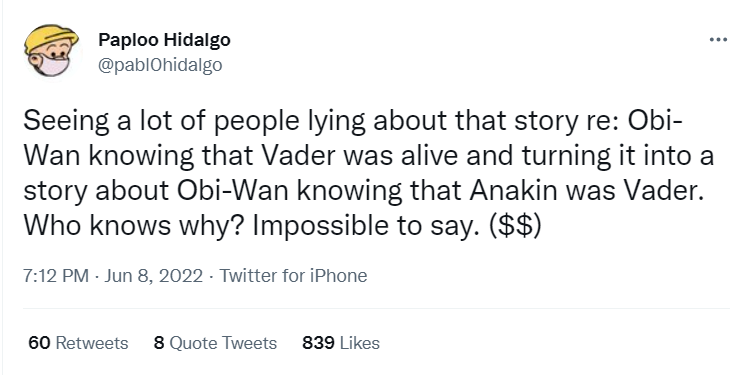 In response to Twitter user StephenH2OMan who pointed to the scene in Revenge of the Sith where Kenobi sees the security footage, Hidalgo wrote, “Of course he knows he’s Vader. He didn’t know he survived. That’s been the status quo since 2005.” 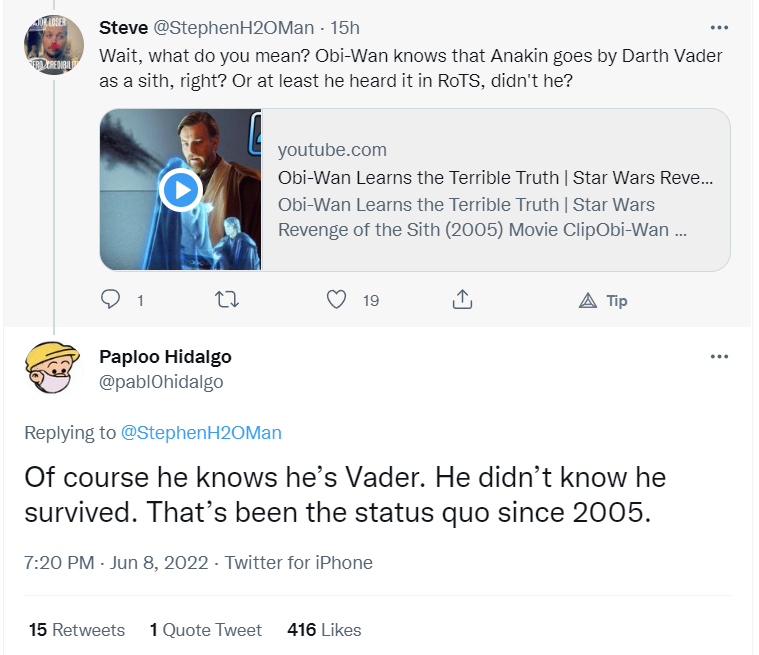 Hidalgo then attempted to justify it by claiming no one on Tatooine had heard of Darth Vader, “It’s not that hard to figure out why Tatooine never heard of him. Luke didn’t know the name in Ep IV and he was dreaming of going to the Imperial Academy.” 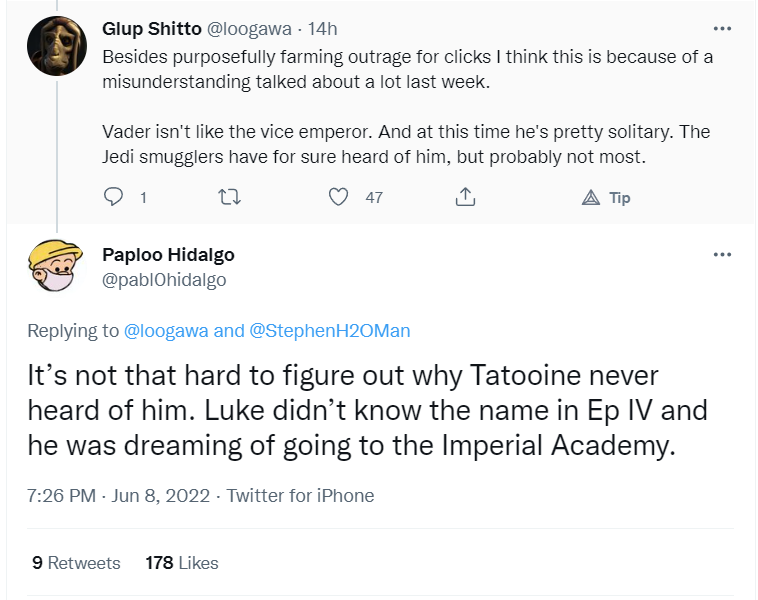 Hidalgo would then double down on his claim that Kenobi did not know Vader was dead despite Return of the Jedi proving that notion false.

Twitter user ATGcast shared one of his tweets that read, “Bounding Into Comics referencing this scene & trying to make the case that Kenobi didn’t know that Anakin is Vader. But Reva is only telling him in Part II that he’s still alive and looking for him. Obi-Wan had every reason to believe he died 10 years ago. Yes, he knows he’s Vader.” 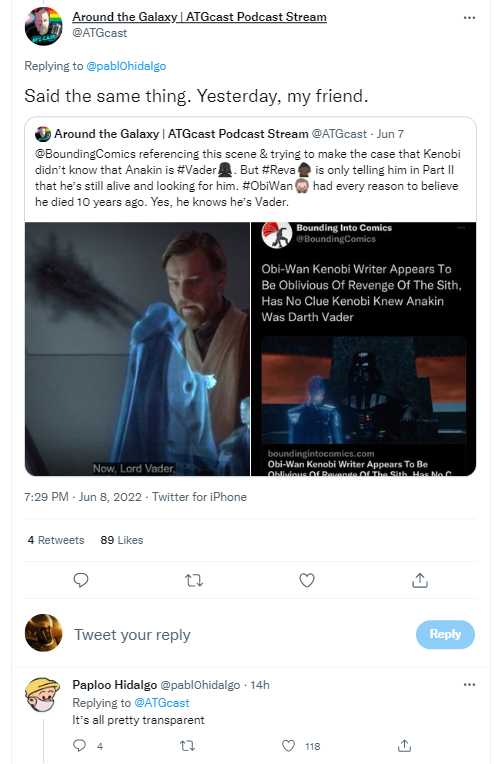 As for why Hidalgo believes this despite Return of the Jedi making it clear it’s not true, Hidalgo implies that George Lucas told James Luceno about it in a novel that Lucasfilm claims is no longer canon and marked Legends.

He told Twitter user Kung_Fu_Cthulu, “It was exactly Luceno’s novel that got the answer from up on high as to whether or not Kenobi knew.” 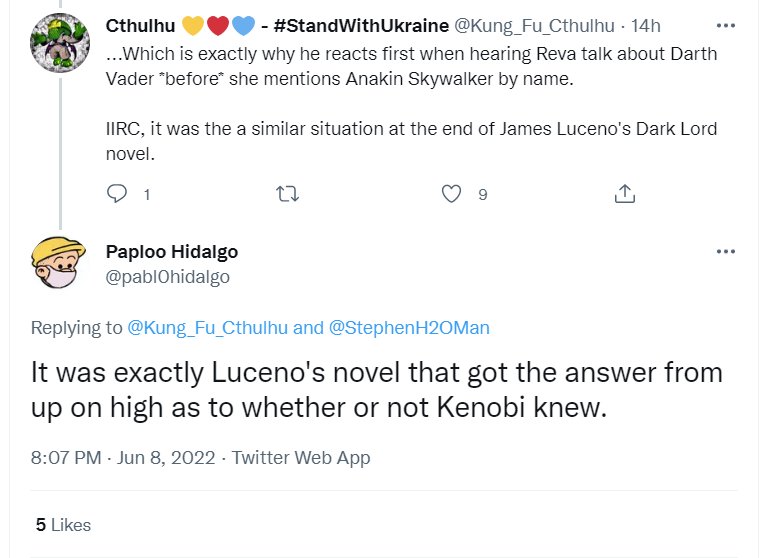 In Luceno’s novel, Dark Lord: The Rise of Darth Vader, he also writes as if Kenobi doesn’t know Vader survived their battle on Mustafar. It reads, “Had he been wrong to let Anakin die there? Could he have been redeemed, as Padme had believed to the last? These were questions that plagued him more deeply than he would ever have thought possible.”

However, in Luceno’s novel, Kenobi doesn’t discover that Vader is alive from Reva, he realizes it from a news report on the HoloNet while at a cantina on Anchorhead.

Luceno wrote, “The burst of static that accompanied the reporter’s mention of the figure’s identity might have surged from Obi-Wan’s brain. Still chilled by the earlier announcement about the Jedi, he was now paralyzed by sudden dread. He couldn’t have heard what he thought he heard! He whirled to the spaceport worker. ‘What did he say? Who is that?’ ‘Lord Vader,’ the man said, all but into his glass of brandy.” 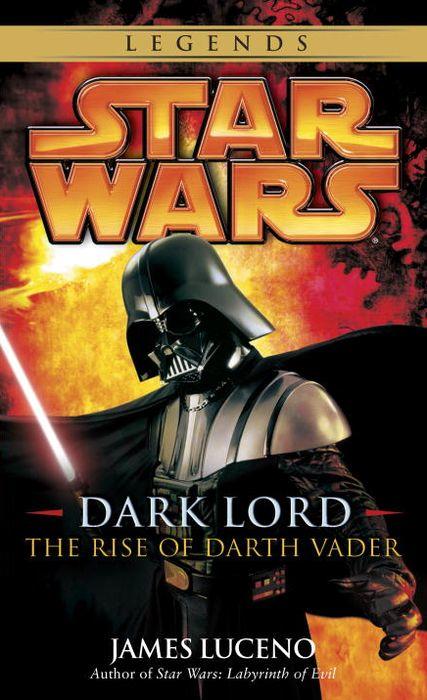 Still later Luceno wrote, “As impossible as it seemed, Anakin had survived Mustafar and had resumed the Sith title of Darth Vader. How could Obi-Wan have been so foolish as to bring Luke here, of all worlds? Anakin’s homeworld, the grave of his mother, the home of his only family members…

What do you make of Hidalgo’s justification and his accusation of lying?