Nightmares are usually best watched together – or at least, they would have been until the COVID-19 pandemic resulted in an indefinite delay of the highly anticipated anime adaptation of Junji Ito’s best selling horror manga Uzumaki. 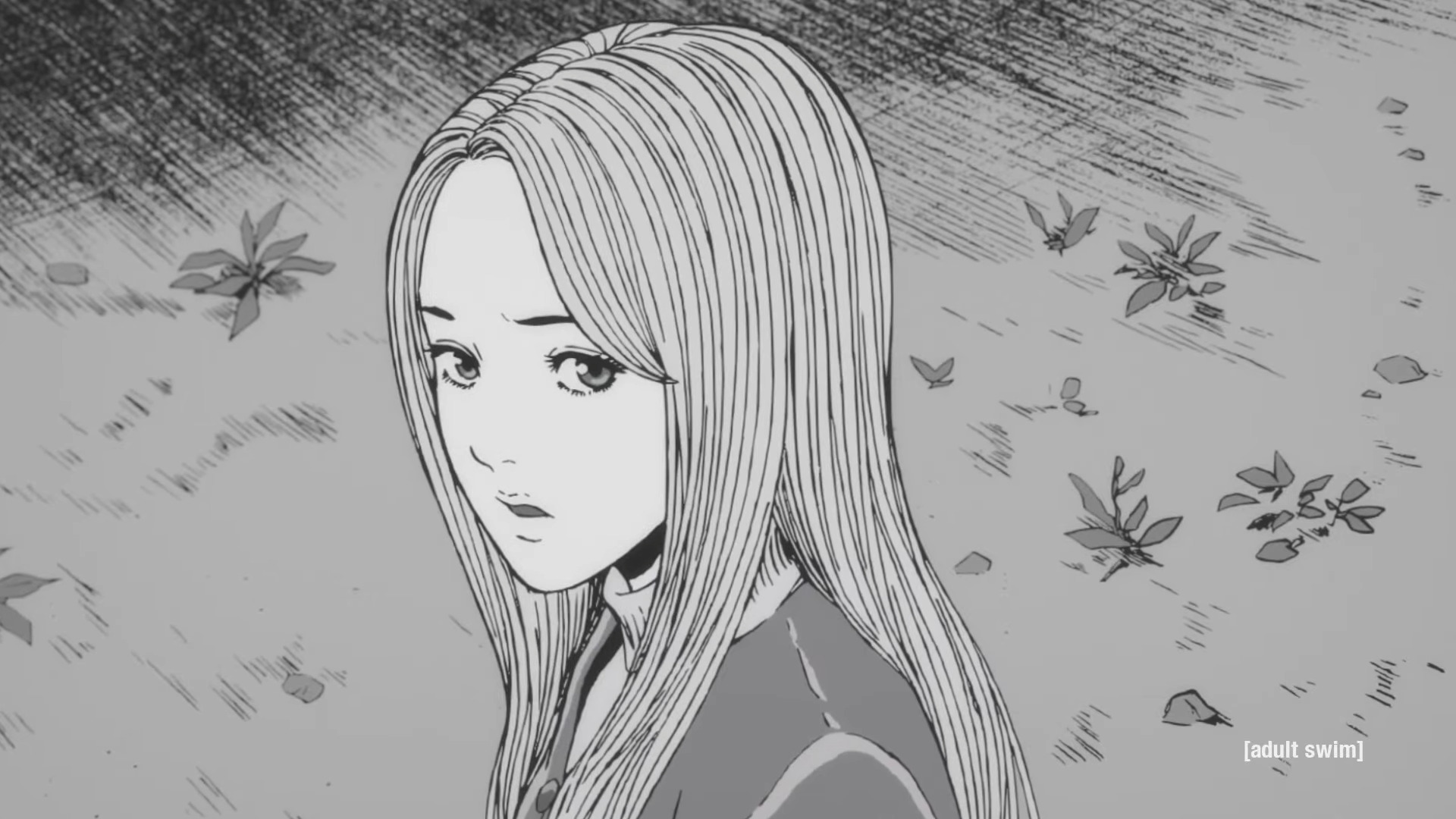 On June 27th, the official twitter account for the Uzumaki anime tweeted out an important update in regards to the status of the anime, therein announcing, “Thanks to everyone for their interest, and positive comments about our Uzumaki anime adaption. Unfortunately, the premiere date of the series must again be delayed.” 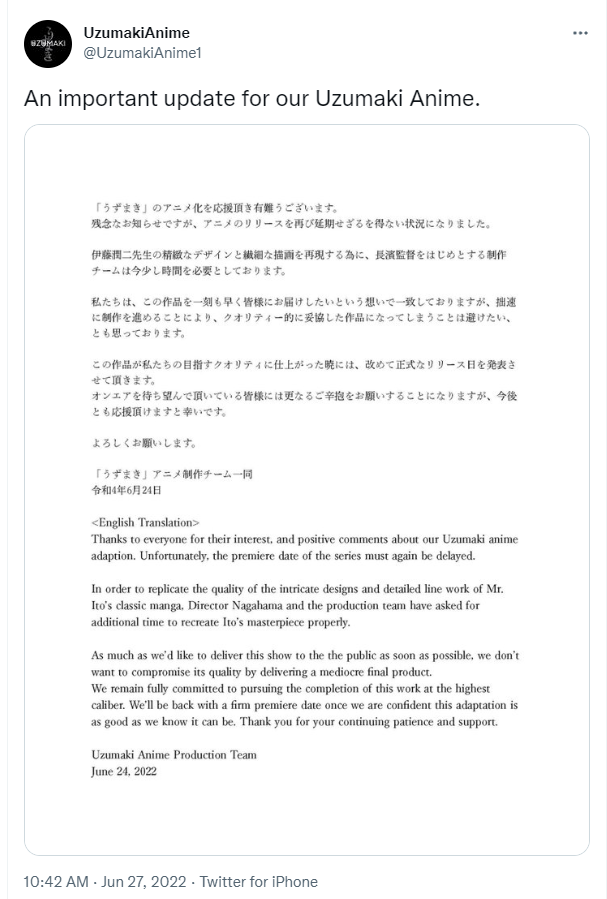 “In order to replicate the quality of the intricate designs and detailed line work of Mr. Ito’s classic manga, Director Nagahama and the production team have asked for additional time to recreate Ito’s masterpiece properly,” the series’ production team explained. “As much as we’d like to deliver this show to the the public as soon as possible, we don’t want to compromise its quality by delivering a mediocre final product.”

“We remain fully committed to pursuing the completion of this work at the highest caliber,” they assured fans in conclusion to their statement. “We’ll be back with a firm premiere date once we are confident this adaptation is as good as we know it can be. Thank you for your continuing patience and support.”

The series’ delay also drew an acknowledgement from Ito himself, who took to his personal Twitter to tell fans, as translated by Production I.G. USA president Maki Terashima, “This is to announce the postponement of the broadcast of the anime ‘Uzumaki’, which is scheduled to air on Cartoon Network/Adult Swim’s broadcast slot ‘Toonami’ in the US! Please wait a moment for another official release announcement!”

Though this news left fans of Ito’s brand of horror sorely disappointed, they have thankfully received recent confirmation that the series is still in production.

On June 10th, the official Uzumaki anime Twitter shared “a quick look at some storyboards for episode one” with eager viewers.

“As you can see, we are using Ito-san’s manga as our guide!” they noted. “We can’t wait to terrify you all.”

UZUMAKI fans, we are working hard on the series and will have more updates for you soon. In the meantime, here’s a quick look at some storyboards for episode one. As you can see, we are using Ito-san’s manga as our guide! We can’t wait to terrify you all… pic.twitter.com/Feg6VbYdBl

Sadly, the four-episode adaptation is no stranger to delays.

A joint production between Production I.G.’s Production I.G. USA branch (Fena: Pirate Princess), and Adult Swim featuring animation by Studio Drive (Konosuba: An Explosion on This Wonderful World!), Uzumaki was originally scheduled to premiere in 2020 until a stealth release date change just six months into that year revealed that production issues had pushed back the series’ debut to 2021. 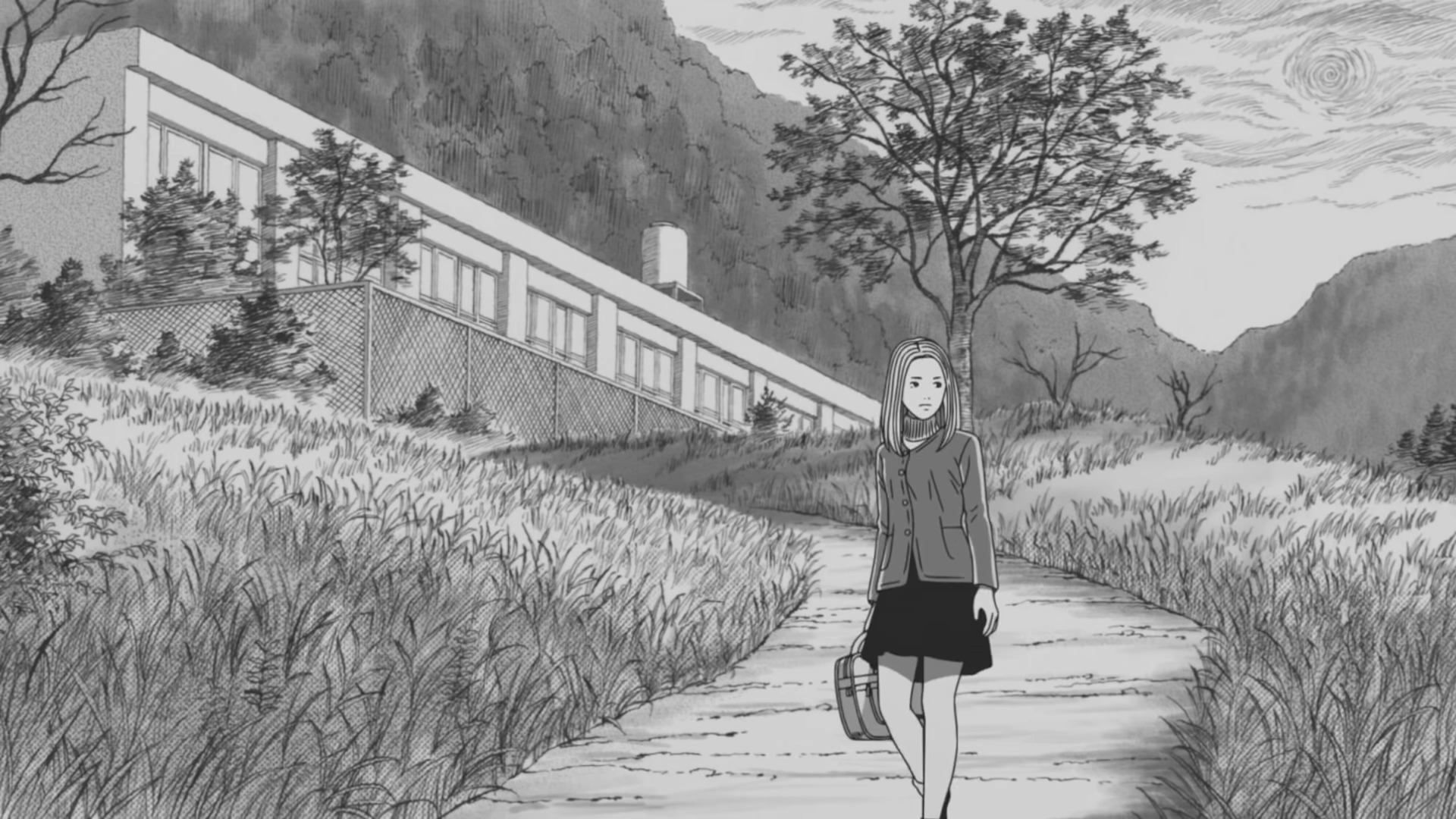 Then, almost one year later in June 2021, Adult Swim co-creator and Warner Discovery SVP of Action and Anime Jason DeMarco regretfully informed fans that Uzumaki had “been moved to October 2022”, explaining that “[Director Hiroshi] Nagahama and team just need more time to cook and get it perfect.”

In a video update shared by DeMarco alongside his tweet, Nagahama unmasked the culprit behind all the delays: like the majority of the Japanese anime industry, the production for Uzumaki had fallen victim to the COVID-19 pandemic. So much so, in fact, that the production team had to restructure their production plans from the bottom up.

“I wanted the fans who have been waiting for Uzumaki to know that I feel truly apologetic for the delay and ask for your patience just a little more,” Nagahama said in the video.

Seeking to soften the blow, Nagahama included in his message a 35-second teaser from the first episode of Uzumaki, therein giving fans their first sneak peak into the cursed town of Kurouzu-cho.

Editor’s Note: This article has been updated to replace the machine translation of Ito’s tweet with one personally provided by Production I.G. USA president Maki Terashima.