Marvel Studios appears to already be making changes to their own continuity in Thor: Love and Thunder that had previously been established in Thor: Ragnarok. 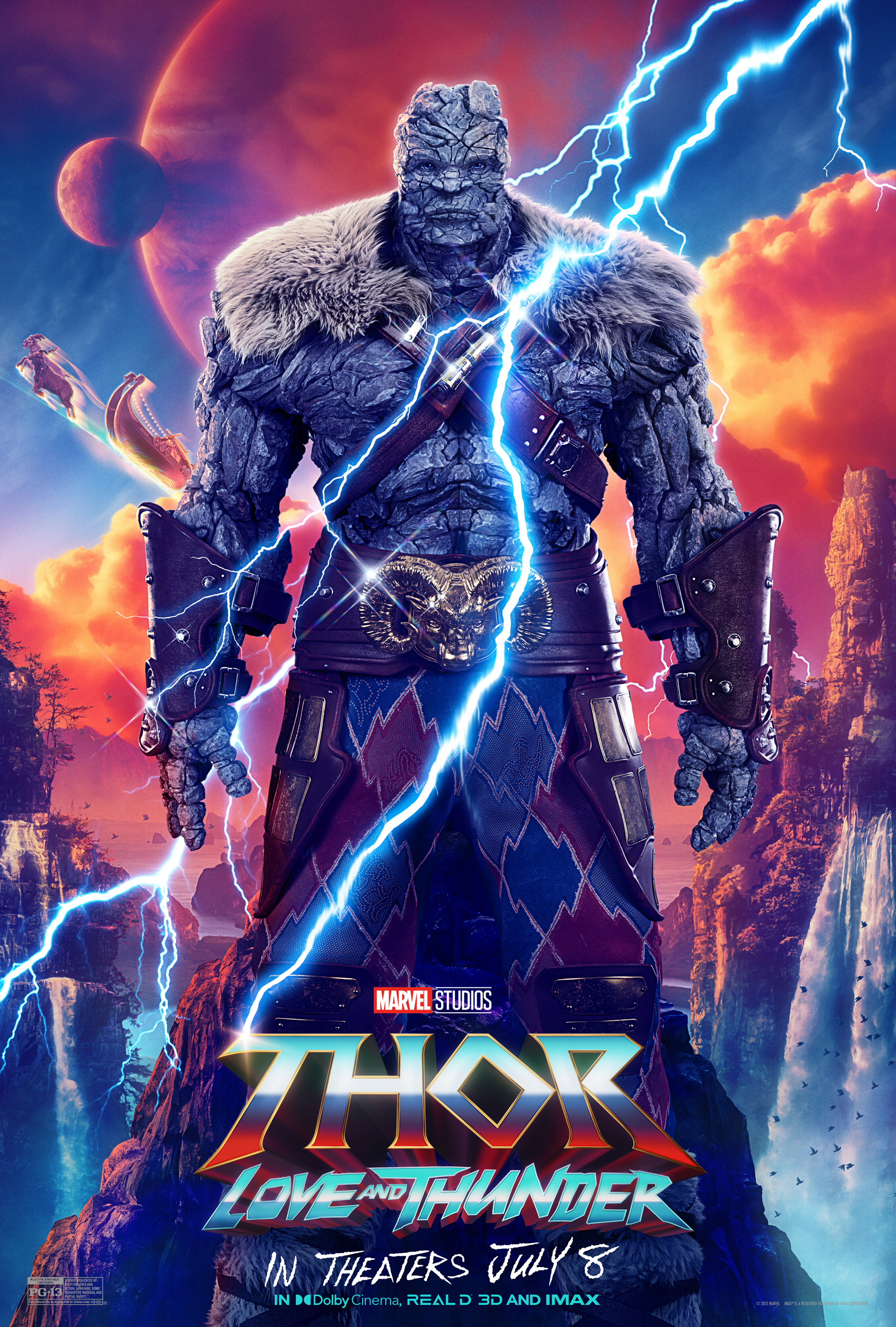 Taika Waititi as Korg in Thor: Love and Thunder

With the release of Thor: Love and Thunder, it appears Kronans, the race of aliens that the character Korg is part of, are now all males.

However, this is a direct contradiction to the previous Thor film, Thor: Ragnarok. In that film, after Thor is captured by Valkyrie and then thrown into a holding area by the Grandmaster, he encounters Korg who informs him how he ended up in the holding area.

Korg says, “Ah, well, I tried to start a revolution, but didn’t print enough pamphlets. So hardly anyone turned up, except for my mum and her boyfriend, who I hate.”

Taika Waititi as Korg and Chris Hemsworth as Thor in Thor: Ragnarok

Not only did the film seemingly retcon the Kronan to making them all male despite Korg clearly referring to his mom in Thor: Ragnarok, but Waititi and Marvel Studios also made Korg gay in Thor: Love and Thunder.

A leaked scene sees Korg apparently mating with another Kronan named Dwayne. Waititi narrates the scene as Korg, saying, “Speaking of futures, I was forging one of my own, now that our bodies grown back, with a dude I met called Dwayne.”

Kronans first appeared in the same issue that Thor made his first appearance, Journey Into Mystery #83 back in 1962, in a story titled “Thor The Mighty and The Stone Men from Saturn.”

The Kronan attempted to launch an invasion of Earth using their superior technology including a holographic dragon and atomic force fields and even a deadly robot called the Mechano-Monster. However, the might of Thor was too strong for the Kronan and the aliens decided to flee after Thor easily destroyed the Mechano-Monster with Mjolnir. 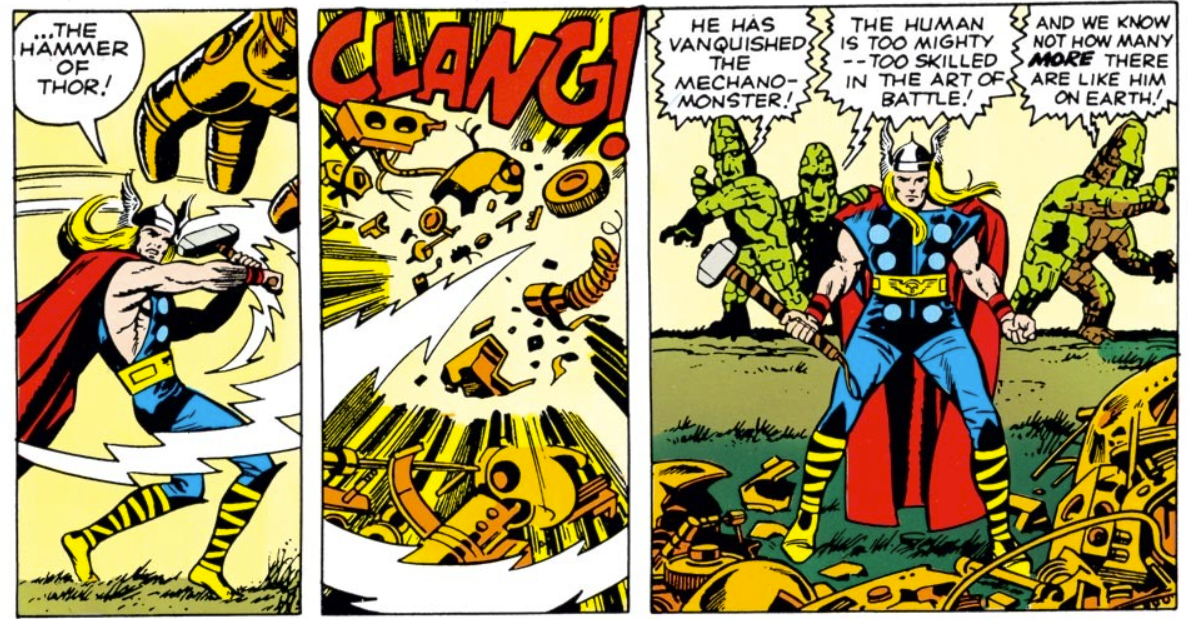 There was no indication that Kronan were all male in the original story with the only named character being Gorr. In fact, in two handbooks, there is no claim that Kronan are only male or even any mention of how they reproduce.

In the Official Handbook of the Marvel Universe #5 published in 1983, describes their bodies. It reads, “Kronan body chemistry is silicon-based. Their thick, virtually impenetrable stone-like hides somewhat resemble the Fantastic Four’s Thing. Their strength increases in atmospheres with more oxygen.” 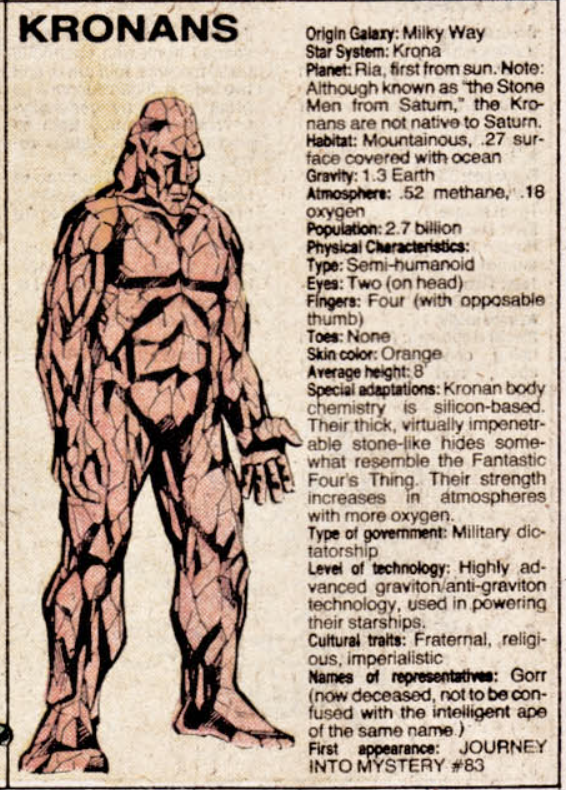 The Official Handbook of the Marvel Universe #5

A similar description is found in The Official Handbook of the Marvel Universe Deluxe Edition Vol. 2 #15 that was published in 1987.

This entry does add a note that reads, “The Kronans have been called the ‘Stone Men of Saturn’ because they once had a base on one of Saturn’s moons. They attempted to conquer Earth but were repulsed by Thor (see Thor).” 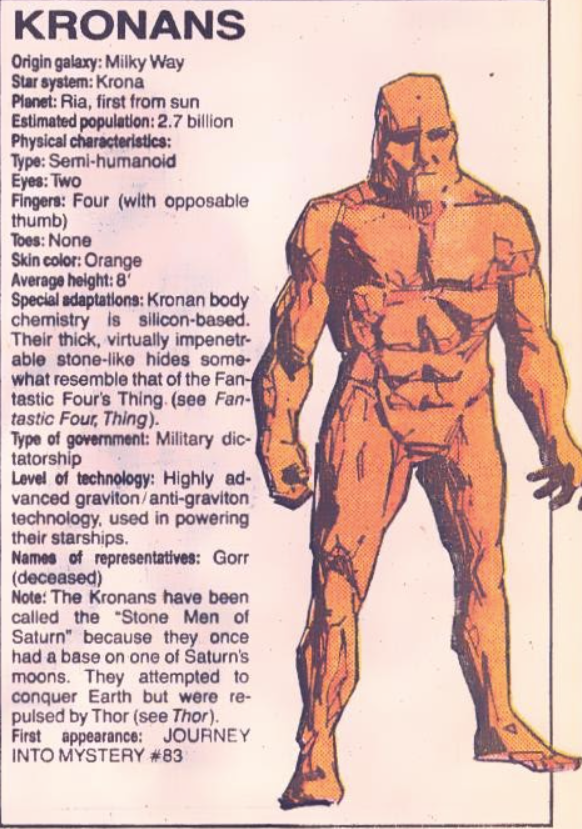 The Official Handbook of the Marvel Universe Deluxe Edition Vol. 2 #15

However, Greg Pak would reveal in World War Hulk: Aftersmash! Warbound #4 that Kronan reproduce by grasping hands and searing them together in the lava of Mount Krona. They then “sit for days fasting and singing until their hands crack apart and new rocklings spill forth in the fullness of time.”

Korg relays this story following the death of his fellow Warbound member Hiroim and indicates he would have been asked him to perform this “honor” with him. 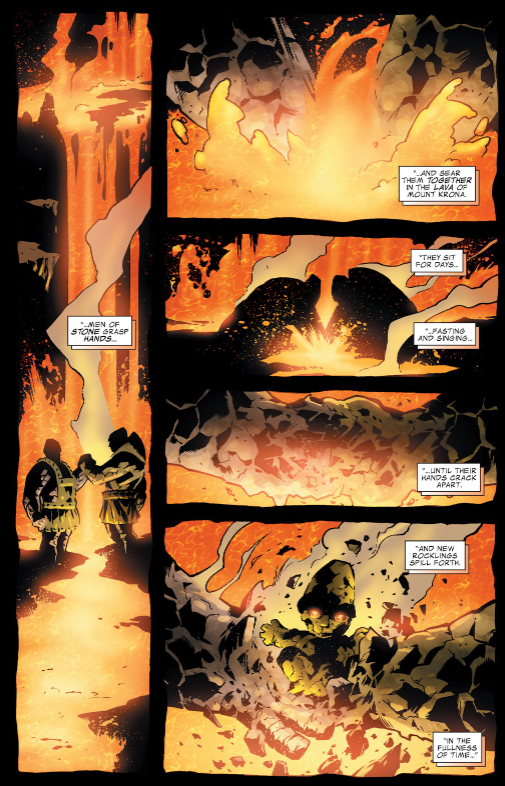 The 2009 guidebook, Official Handbook of the Marvel Universe  A to Z Vol. 1 #6 would be updated to include this new revelation.

It reads, “Reproduction occurs when two males sear their hands together in the lave of Mount Krona, after days of fasting and singing, the fused hands snap off, creating a new Kronan.” 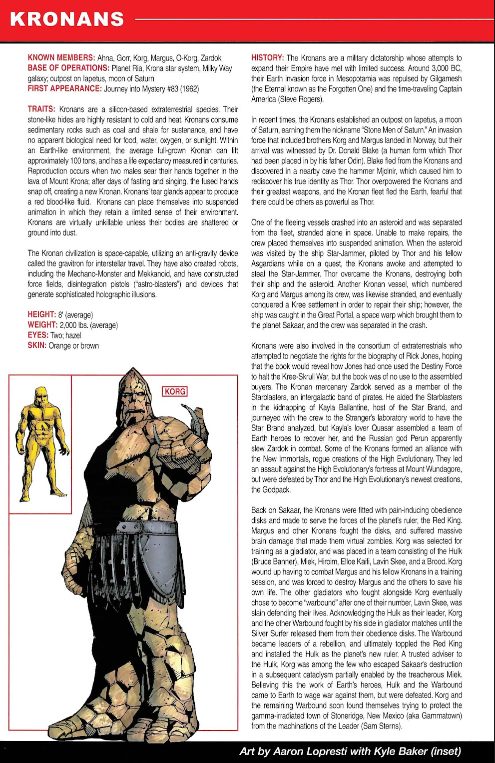 Source: Official Handbook of the Marvel Universe  A to Z Vol. 1 #6

What do you make of this change to Kronans in Thor: Love and Thunder?